In late October of last year, someone won $1.5 billion in a Mega Millions jackpot. To put that number in perspective, that’s equal to about 300,000 new rafts plus a new gear shed the size of the NRS warehouse. To put the odds of winning this lottery in perspective, at 302 million to 1, a person is more likely to be killed by a falling vending machine, or be elected President, but slightly less likely to win an early July permit on the Middle Fork of the Salmon River.

Okay…maybe an exaggeration. But barely.

On February 14, the Four River Lottery winners will be announced. I, most likely, will not be one of them. Following a collective groan, thousands of empty-handed river people and I will lash together some commiseration and float down the river of despair, which, we will lament, may be the only multi-day river trip we take. So despite the fact that it is Valentines Day, our hearts will be broken, again.

But please do not feel sorry for us! Most of us know and accept that it has to be this way.

In the American West, rivers run like miracles out of the mountains and into the dry country. And just as every rivulet, freshet and stream in a watershed is drawn down to the river, so are people—lots of people. The conjunction of huge swaths of public land and free-flowing rivers in the West have created a unique recreation opportunity: a chance to launch a boat on a river, sleep along the river, wake up along the river, and repeat—for days, in some cases weeks, on end. 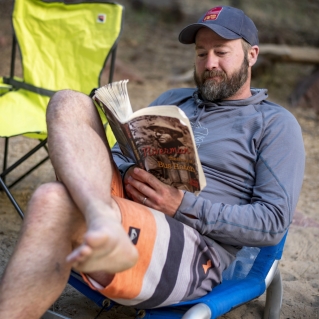 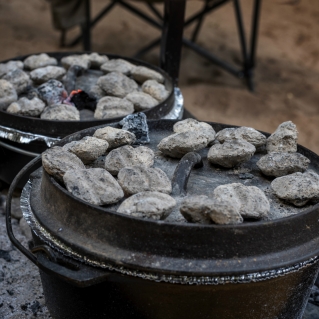 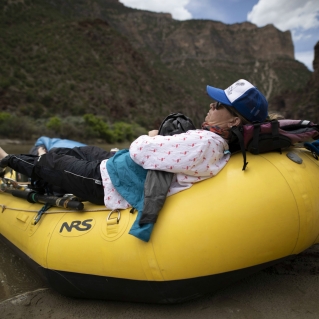 In the early days of river running, just a few intrepid adventurers were running the rivers in the West. But, as more paddlers explored more rivers and as equipment improved, commercial river running began adding to the number of people using these rivers. This was predictably followed by increased interest in recreational boating as former customers and guides bought their own rafts, dories, and kayaks and began to take private trips.

As the numbers of people using these river corridors swelled, the problems with a free-for-all system became apparent. Human waste oozing out of the sand on popular beaches, fragile river vegetation hacked into campsites, human/wildlife conflicts, human/human conflicts, garbage, noise—pretty much all the problems you get when too many people use a limited and fragile resource.

The solution to this problem was and still is, to limit the number of people on the most popular multi-day river trips. This can be accomplished in several different ways.

One of the easiest is to require a permit or license of some kind and then make it prohibitively expensive. Fortunately, in America, we don’t like to portion out our access to public resources to the highest bidder—yet. And while some trips, like a float down the Colorado River through the Grand Canyon do require significant fees for the application and permit including a $25 application fee, a $400 deposit for a large group trip and $90 per person—these fees didn’t stop over 6,650 people from applying for 463 launch spots in 2018.

Governing bodies have tried various other methods to allocate river trips: First-come-first-serve, wait-lists and reservations. But lotteries and weighted lotteries are the preferred method for most western rivers.

The river lottery season begins in December and ends in early March for most rivers, although cancellation lotteries happen throughout the year in the case of the Colorado River through the Grand Canyon.

In a river lottery, people pay an application fee and then pick several potential launch dates. Applicants are drawn at random and their dates are checked against the allocated non-commercial launches for that date. If there is an available launch that day, someone’s day is made. If not, they move to the next potential date selected. In the instance that all the potential dates are full, then another applicant is selected and the process is repeated. This means that prime dates are especially hard to win.

A weighted lottery operates in much the same way, with the additional factor of recency, meaning the more time has passed since you have been on the river—or if you’ve never been on that river—the more chances you get. This is much like preference points in hunting lotteries. 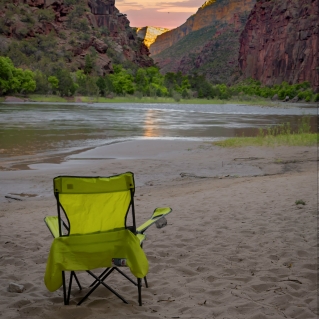 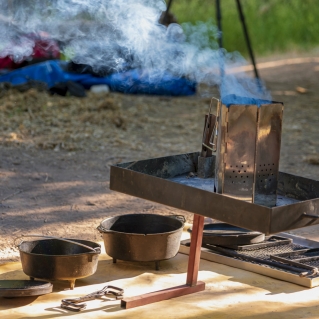 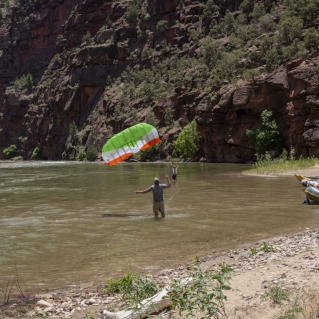 Winston Churchill once called democracy “The worst system of government except for all those others.” The same could be said of the river permit lottery system. It’s a system designed to disappoint the vast majority of its users. Upwards of 99% of applicants for prime dates on popular multi-day floats will receive a “Sorry, your application did not win,” notification.

This has produced a popular pastime: complaining about the lottery.

For one thing, most boaters intellectually know that we need a lottery but instinctively hate the bureaucratic regulations and the death of spontaneity. A river seems like something we should be able to float whenever we feel like. And for many rivers we can, but for some of the best multi-days, we’re forced to cross our fingers and hope, or play the system.

Many of the lotteries release the launch quotas and the number of applications for specific days data from the previous lottery—a statistician’s wet dream for sure.

But having spent an evening or two trying to outguess the masses based on last year’s data and still losing every lottery application, has not made me confident that math and patterns will yield greater success in the lottery. Too many variables. Will most people want the weekend on the front end or tail end of their trip? How many people will choose to launch on July 5th if it means traveling on July 4th? Will there be five private launches on June 16th this year?

If your analysis skills are average, this leaves you with a few other options: permit parties, cancellations, commercial trips, and begging.

Let’s start with permit parties. It’s easy. Get a bunch of people together, supply some booze and have everyone apply for similar or the same dates. Mathematically, this improves your odds. Instead of one in 3000 you are now like 10 in 3000 to apply for that launch date. Of course, the potential for problems also increases along with your odds. Personality conflicts, trip-style conflicts, and scheduling conflicts can result in cancellations.

In addition to flaky or frustrating friends, Mother Nature can confound even the best crystal balls and prevent launches. Weather and water levels defy predictions because, in the West, record-breaking years often skew the averages. The average flows in late June look perfect only because one year the river is an unsafe raging torrent several feet above flood stage and the next it’s a barely floatable trickle. Dam regulated flows mitigate these fluctuations somewhat but dam managers can be “damn” managers releasing too much or too little water. It goes without saying, weather and water levels are predictably unpredictable. 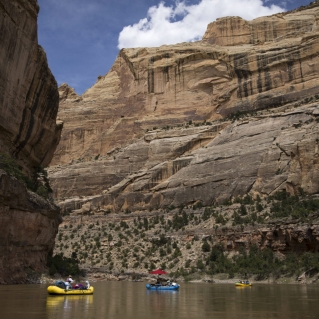 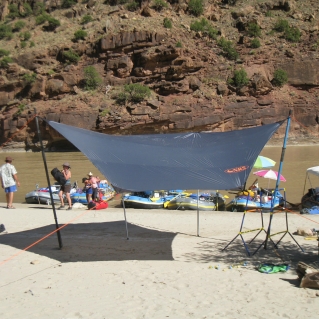 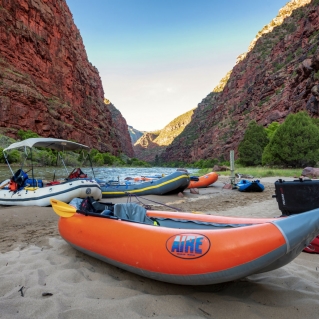 Green River through the Gates of Lodore, photo: Glenn Martin

Although there have been a few cases of people trying to “hack” the system by building software to troll the internet for availability, this practice has been identified and mostly stopped. Of course, fairness is little consolation when faced with long odds.

This leads to the last two options: commercial trips and begging. I won’t spend much time covering commercial trips. Most private boaters won’t pay to take one for a slew of reasons: rafters want to run their own trips, commercial companies are frenemies of rafters (stealing a good share of permits) and rafters are broke because they took up rafting.

On to the last, and what I think is the best option: begging for an invitation on someone else’s trip on internet rafting forums. Generous or desperate lottery winners will occasionally offer strangers spots on their trip. They may do this for a number of reasons: their buddies from the permit party bailed, they have no buddies, they have no rafting experience, they believe in karma. Or maybe their kids have only agreed to the trip if other kids go along. Better yet, they want participants for a multi-day experience of a different sort (see Grand Canyon with a Twist Thread on Mountain Buzz—parental control advised).

Often, unlucky rafters will anticipate an opening on a trip or try to cause one by soliciting or advertising. I’ve seen people advertising their group gear, rowing experience, medical background, camp cooking skills, fun-loving and easy going nature, access to cheap booze, hot girlfriend/boyfriend, ukulele chops, friendly kids, anything and everything really. It’s like flashing a bit of skin when you’re permit-hitchhiking. Or emphasizing your best features on a multi-day blind dating app. But it’s also like playing a different kind of a lottery than the one that you clearly did not win. A lottery that can be both won and lost.

The takeaway is that the lottery is hard to win and necessary.

In a perfect world, we can launch on any river we want, float through a wilderness in relative solitude, and know that the river and surrounding wilderness will remain in pristine condition. But the sheer number of people who share this fantasy means that our wish list isn’t possible. So the permit lottery system is designed to give us solitude for ourselves and protection for our rivers. And we will have to be okay with that.

In the words of that famous philosopher Meatloaf, “Two out of three ain’t bad.”