The Navigator: Find Your Way to All-Season Boating

There are only two seasons in the Pacific Northwest—the rainy season and everything else. Since it’s guaranteed wet nine months a year, and Cascade rivers are glacial snowmelt, a quality drysuit can go a long way out here.

The NRS Navigator Paddling Suit fills a wide range of needs. Originally built for sea kayaking, it differs from most drysuits because it features a neoprene neck gasket, giving it a semi-dry classification. This is meant to be more comfortable throughout a full day than a latex gasket. And believe me, it is. 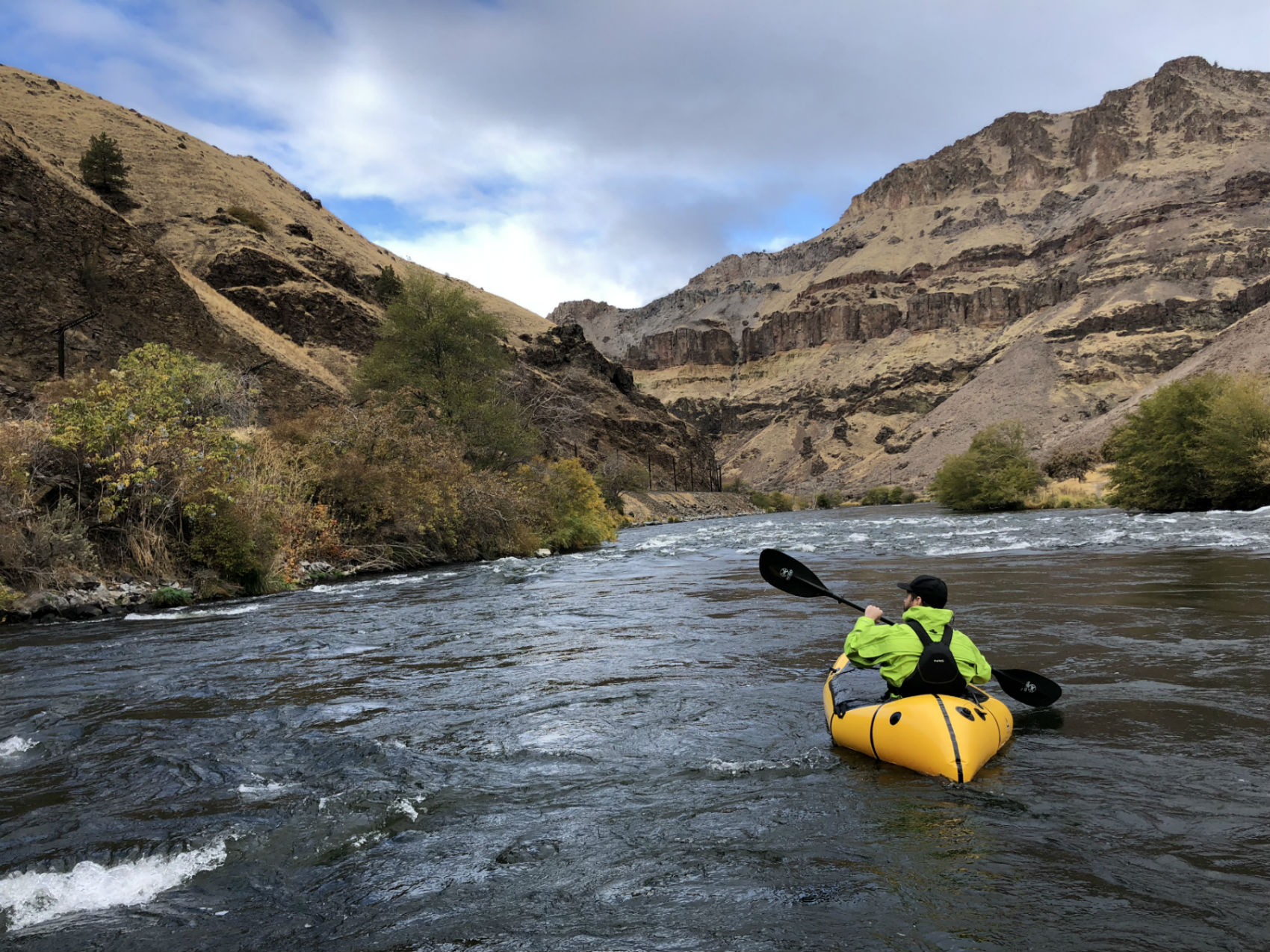 I decided to try out the Navigator on an October trip down the Deschutes. The forecast looked more suitable for watching TV on the couch: gray skies and impending rain with a high of 50 degrees. Since we were doing 38 miles in two days, and I’d be in a packraft, I really hoped the paddling suit would keep me comfortable enough.

Right off the bat, the Navigator felt good, though the high visibility green seemed a little extreme. My buddies in the raft wore sweatshirts and here I looked prepped for a moonwalk. The hood, too, felt big. Since I didn’t need to wear it—yet—I rolled it up and cinched it down with a bungee clasp, giving the suit a high-collar look but it wasn’t as cumbersome as having it flap around in the back.

After the first few miles, the Deschutes Canyon opens up into big mountainside views with cabins scattered along the riverbank. They’re the kind of ramshackle affairs that families pass down for generations. Smoke rose from a few chimneys, but most were closed up for the season. 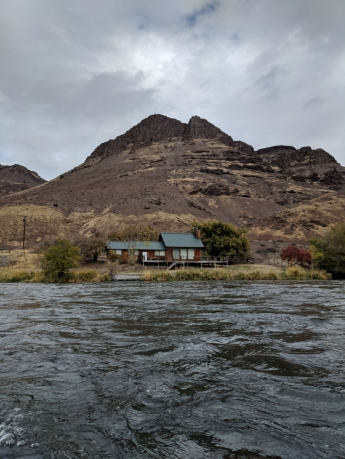 Cabins on the Deschutes. 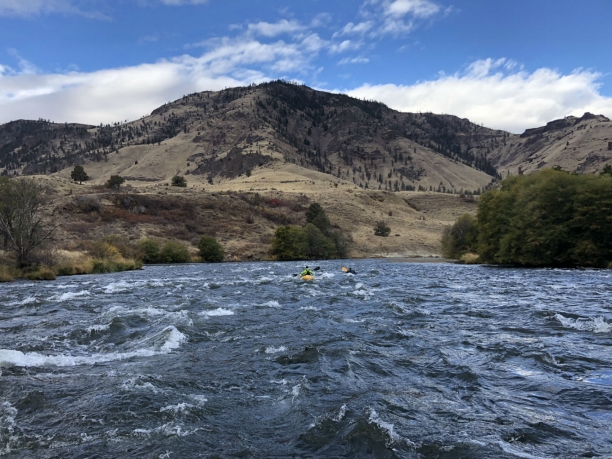 The river is a broad force up here with a brisk clip but no major rapids until it heads through the Mutton Mountains. We ran a few wave trains and I took some water over the bow which left me lounging in a cold bath since my packraft is a bucket boat. Luckily, I know the drysuit isn’t the end-all-be-all of cold weather gear so I layered fleece pants and a long-sleeve shirt underneath. For 50 degrees and sunny, this combination felt about right.

The latex wrist gaskets kept out any water that dripped off my paddle and down my sleeve. And with the neoprene outer cuff acting as a plan-b buffer, getting water through the wrist with a casual drip or dunk is basically impossible. The 4-layer Eclipse® fabric beaded water like a duck, letting no moisture soak through. And between the schizophrenic sun and the splashy rapids, I still felt totally comfortable.

As we drifted toward the mountains we noticed the blackened hillsides from the Boxcar Fire. It burned about 26 miles along the eastern riverbank from South Junction to Maupin last summer. It looked like the fire jumped ridges and swept across the mountainside burning grass and scorching juniper trees, and come to think of it, the scent of juniper smelled stronger than I’ve ever smelled before. I pulled a Clif Bar out from the zippered pocket on the left and right arms and looked for bighorn sheep among the dark and jagged cliffs high on the mountains. In some places, up ahead, we could see the basalt cliffs rising directly from the river. 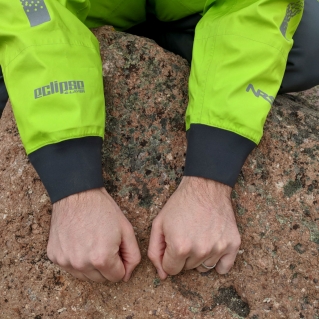 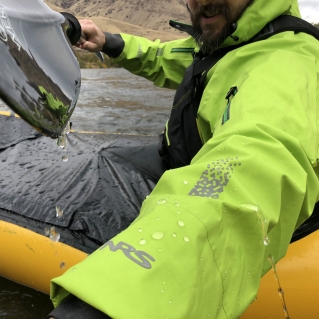 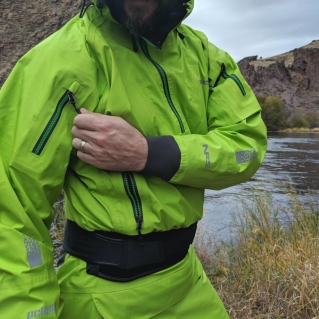 The sun sunk behind thick clouds and the river turned steel gray. A few alders and cottonwoods along the banks had turned yellow and it felt good to be out on the river in fall. A weekend trip like this, with a high of 50 degrees, rain, and scattered sun wouldn’t sound as appealing without the drysuit. There’s no way I’d be in the small boat without it. Owning the Navigator Paddling Suit opened up a whole new world of seasonal boating options.

Any warmth the sun provided faded as daylight drifted into a soft pastel. The rocks along the river took on a dreamy hue like landscape paintings from long ago, and with night coming on we were approaching the most difficult section on the entire stretch, Whitehorse Rapids.

Whitehorse is a true Class III that’s over a half a mile long. The river drops 40 feet through this section and has a few big waves. The line through is easy enough to hold as long as you know where you’re going. We scouted along the train tracks. The raft would take the mainline while the other packrafter and I opted for a sneak chute that’s more technical but less powerful. Even with the Navigator, I didn’t want to take a mile-long swim before nightfall. 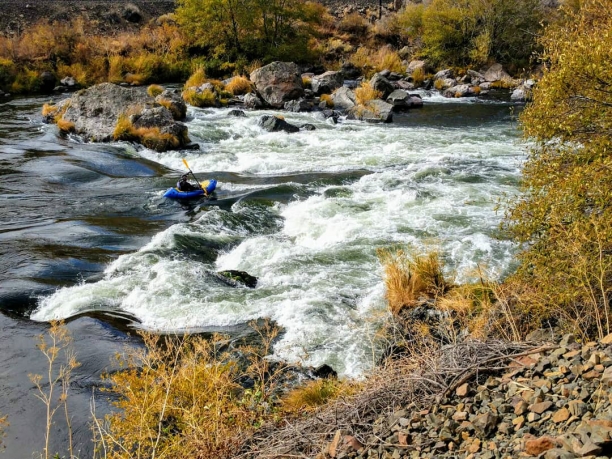 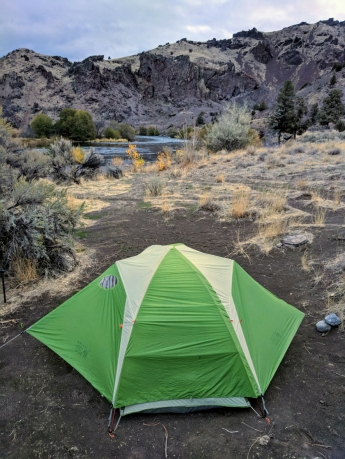 We made it through without a hitch and down to Davidson Flats where we took off the river in near darkness. In the summer, boaters completely jack this camp. Now, with yellow leaves drifting through the air, we shared it with a lone rafter on the other side of camp. I stepped out of the Navigator and discovered myself delightfully dry. I changed into camp clothes and set about starting a fire. The clouds settled in and the night darkened quickly. We cooked a dutch oven meal, drank a few beers, and turned in after covering 17 miles on the river that afternoon.

The Navigator felt comfortable all day long. I never thought twice about the gasket around my neck, while my buddy in the packraft had a red rash around his neck from his latex one. And even though I sat in water for chunks of time, I stayed completely dry and warm. I liked the pocket set up on the arms and used one to store snacks and the other my phone. Although in full disclosure, the pockets aren’t fully waterproof. In the event of a legit swim, I would have, more than likely, sacrificed my phone with that storage decision.

A few times when I pulled over, I used the kangaroo pass-through pocket to warm my ungloved hands, and the relief zipper in front made a quick pit stop a million times easier than when I wore a wetsuit under rain gear. I never got a chance to use the oversized hood. It even has air vents in the front, so in extremely bad weather it acts as a techy balaclava that covers your mouth and nose. It’s an added feature that I hope I don’t use often. 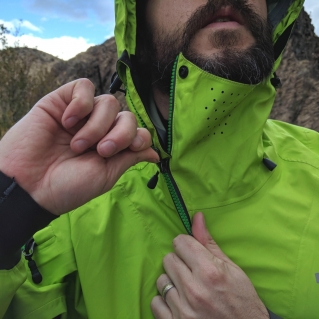 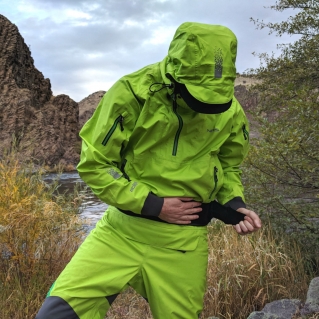 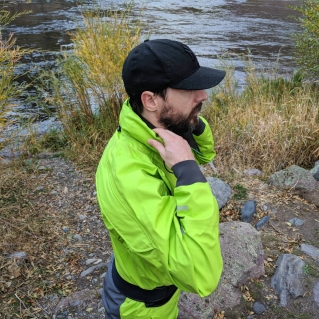 Overall, the Navigator is an excellent entry level semi-drysuit. It’s best for sea kayaking, rafting, or inflatable kayaks in fall and spring. (If you’re paddling in the winter, I’d recommend only wearing it in conditions where capsizing is possible but not likely and frequent rolling isn’t necessary.)

The comfortable neck makes it feel homey for a full day on the water, and if the skies open up, that hood would let you batten down the hatches and stay dry no matter what. The Deschutes in fall is a perfect warm up, but when the rain really starts to fly in the Pacific Northwest, I can’t wait to wear the Navigator as I paddle down river in comfort. 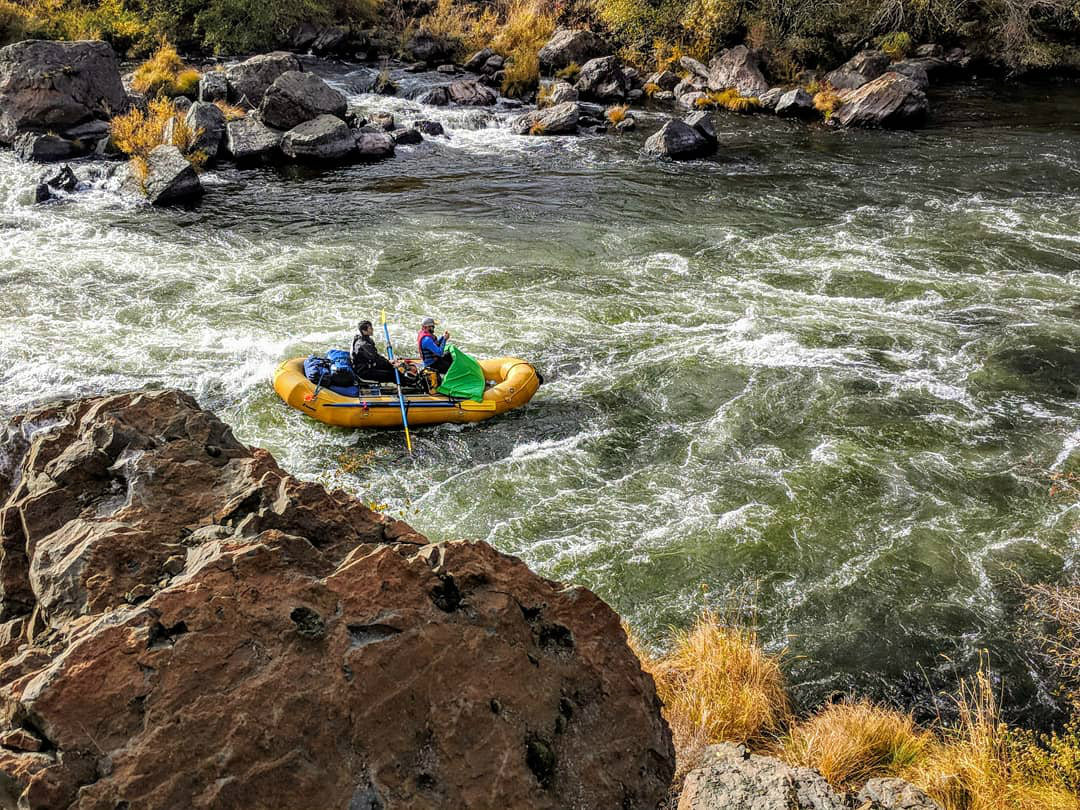