It Starts With One: The Story of Bhutan’s First Female Kayaker

It was only last summer that the community-based raft company River Guides of Panbang asked 22-year-old Tshering Choki to join their team to help cook, serve food, and do housekeeping at their Marang Jungle Lodge. And it was there, along the crystal blue Marangdut Creek in the depths of Southern Bhutan, that the beginning of Bhutan’s first female kayaker took a float. 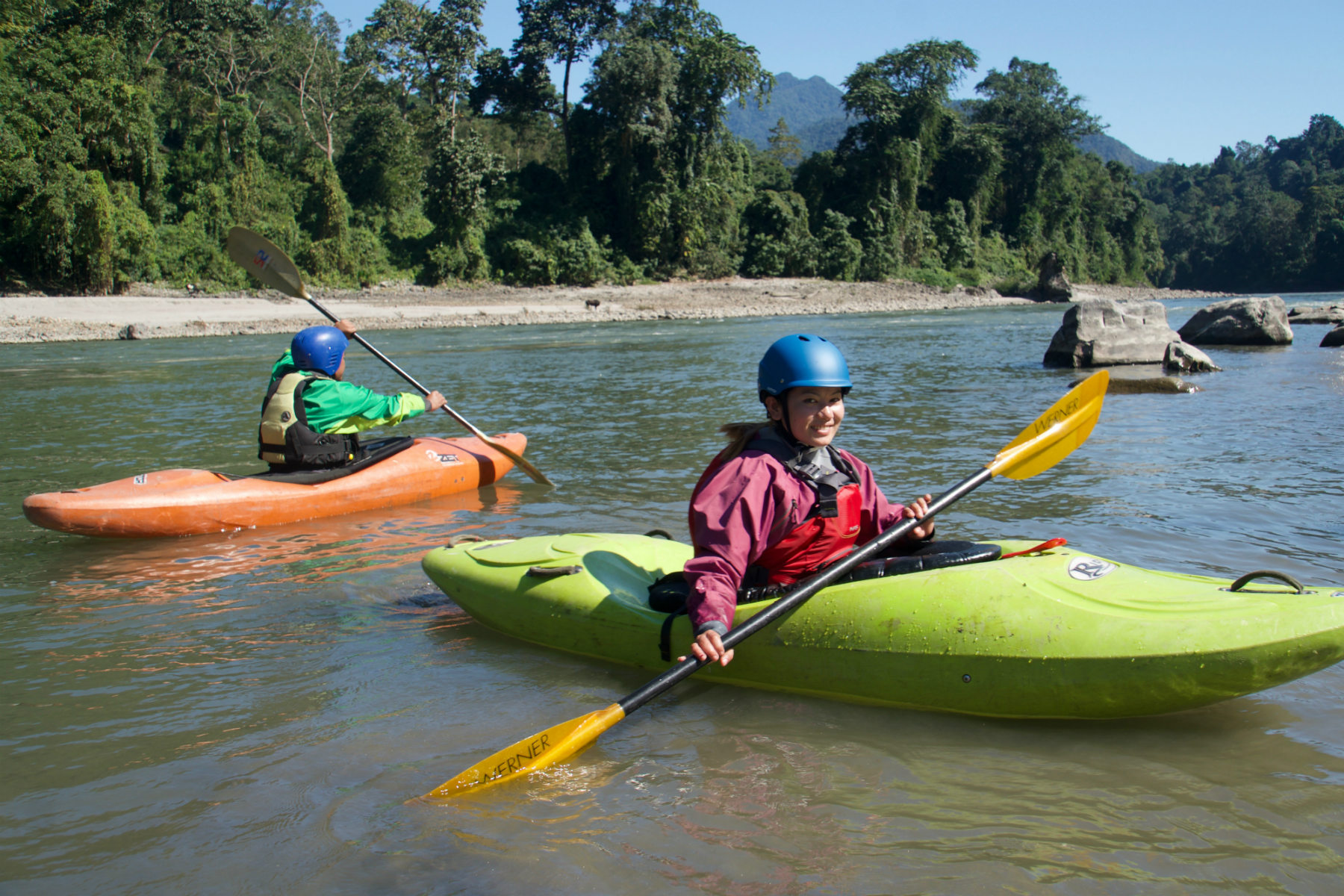 Tshering was raised by her mother in Panbang, a small town on the banks of the Drangme Chhu river near the border of India. Made up of only about 1,500 people, Panbang is surrounded by scattered river villages, still only accessible by footpaths. Growing up, Tshering and her family used fuelwood for cooking and kerosene for light before the town was connected to electricity in 2010. She walked the paths along the Drangme Chhu river basin to connect with roads and buses as needed. 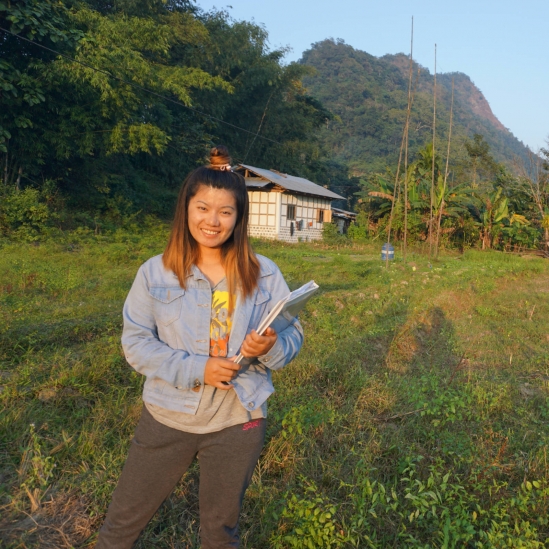 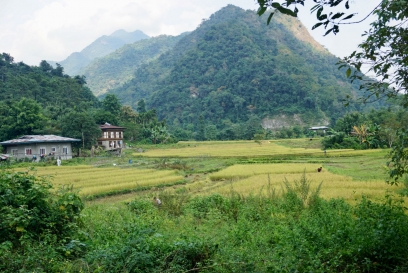 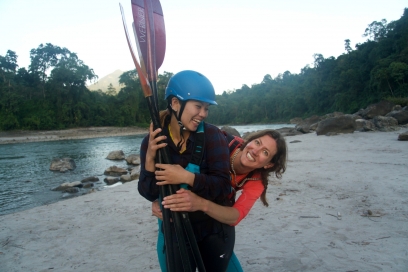 Panbang is also home to the River Guides of Panbang (RGP), one of the most truly unique whitewater companies in the world. In Bhutan’s relatively undeveloped south, the Bhutan Foundation recognized the positive impact rafting and ecotourism could have in the region, which boasts two of the country’s largest rivers, and proximity to the biodiverse-rich Royal Manas National Park. The organization initiated the development of RGP hoping to create more attractive jobs for youth in rural areas and build incentive for young adults to stick around the local villages and has since also received support from the Tourism Council of Bhutan and Bhutan’s King Jigme Khesar Namgyel Wangchuck.

Increased urban migration and youth unemployment is a national challenge in Bhutan. The nation’s younger generations flock to more urban areas for middle school, high school, and university opportunities and usually stay for easier access to more modern ways of life and hopes of work. In Bhutan, although there is currently very limited job opportunity in urban areas, the growing educated demographic of the country continue to move to the city of Thimphu looking for a large number of jobs that don’t actually exist yet. To combat this trend, in 2011, the Bhutan Foundation gathered a local youth group and helped build RGP, a realized idea of a raft company run by local community members which also gives back to the community through social and environmental initiatives. 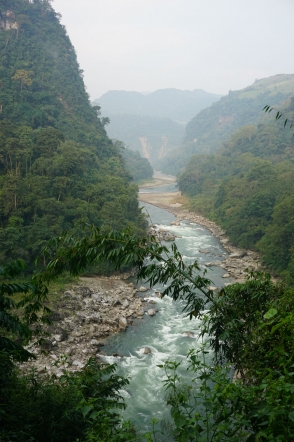 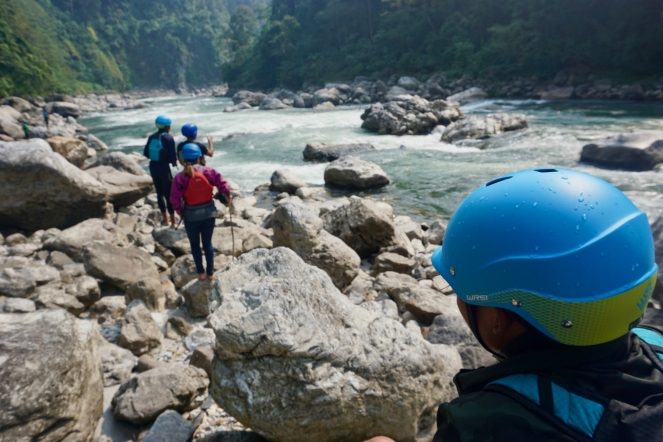 Today, nine of the original founding members operate RGP and have taken on new trainees in an effort to continue its growth, expand local employment opportunities, and increase its capacity to give back to the community. The company specializes in scenic half-day floats on the Manas River into Manas National Park. They also operate day and overnight trips on the fun, friendly, big water waves of the Drangme Chhu and Mangde Chhu, two of Bhutan’s largest volume rivers, all right in their backyard.

Last summer, Tshering Choki had just returned to Panbang. Until legislation passed in the beginning of 2019, if students didn’t pass an exam in grade 10, they were considered “drop-outs” and no longer qualified for public education. While Tshering excelled immensely in sports such as volleyball and soccer and even made it to the national championships for basketball, she didn’t pass her grade 10 exam. Her mother managed to pay for her to go to private school through class 12, after which her mother asked her to return home to help the family. 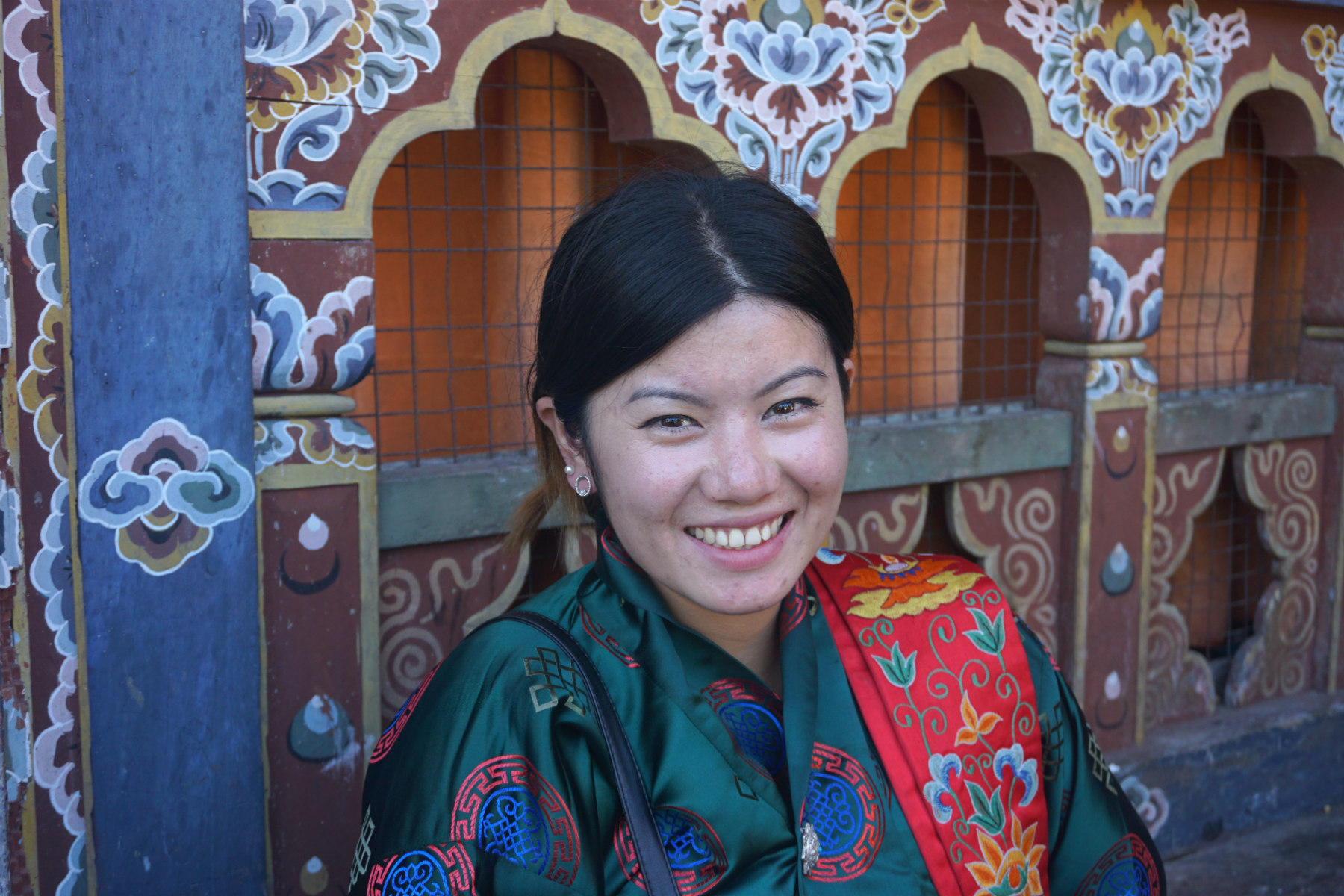 On the job with RGP, Tshering’s undeniable hard work ethic, infectious giggle, quick wit, and the firecracker nature with which she handled working with an all-male team immediately spurred the encouragement from RGP and the Bhutan Foundation for her to take part in the company’s upcoming kayak and whitewater safety training.

“Since we don’t have a single lady in River Guides, I tried many times to influence Tshering to join us on the water, but it was very hard at first,” said Ugyen Khenda, General Manager of RGP. “The day I told her we would have a kayak training with a woman instructor from the United States, she agreed. What’s important now is that more women join. Our plan is for RGP to offer more opportunities to Tshering with hopes that her involvement will influence and encourage more women to become river guides.”

RGP is not only extremely proud to have a female on their team, they also see her as a strong asset to support bringing more women into the company. In terms of community benefit, studies suggest that the empowerment of women and the increase in their control over household income leads to more sustainable investment of those resources, particularly for family investments in food and children’s education. 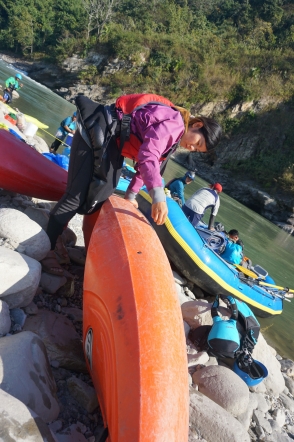 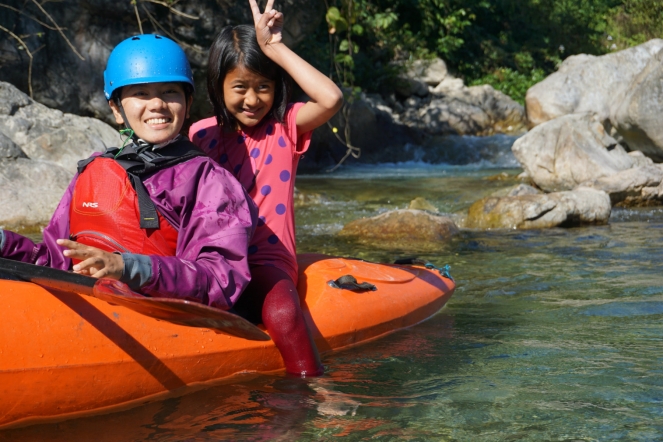 When I landed in Bhutan, Tshering was undergoing an internship in the Food and Beverage department of the luxuriously renowned Aman Kora in Thimphu. RGP’s General Manager Khenda welcomed me with a warm smile, big hug, and a khata at the airport, and we met up with Tshering at my hotel. She showed me around the local shops and sites, her smile enormous and her giggles frequent, especially in response to my incomprehensibly fast English. The next day, she returned to Panbang to help load up with the RGP team for a two-night rafting trip from Yangbari to their Jungle Lodge on the Drangme Chhu, while I drove with a team across most of the country scoping out potential itineraries to connect groups with new experiences en route to Panbang’s big rivers and jungles.

After days of winding through Bhutan’s mountains and dzongs, we arrived at the Yangbari section’s beach put-in, where we met Tshering, the other new kayak trainees, and more of the RGP crew. For the trainees, the small, hard craft I was about to venture down the river in was foreign and curious.

Tshering would later tell me that when she first saw me kayaking she immediately wanted to try it. “I thought, I must do that,” she said. 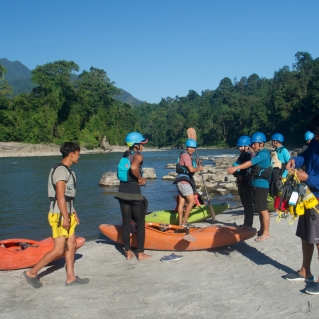 Sandy put-in for the Yangbari. 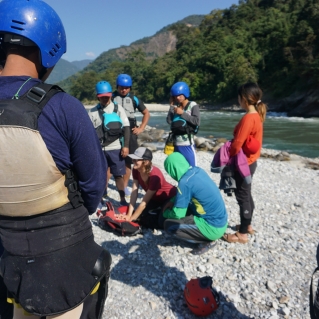 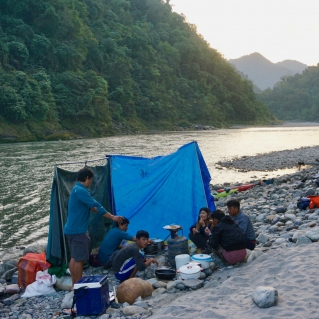 We began the introduction to kayak trainings on flat water. The first time we ventured downstream from Marangdut Jungle Lodge to the Panbang bridge, Tshering caught the first eddy she could and paddled directly to shore, as if in a head-to-head race to dry land. Later above rapids, she would start paddling backward in an abrupt moment of indecision. “I was so excited, but when I got in the water in a kayak, I was very afraid. My heartbeat was almost not with me,” she said. Later, after going in the river a few more times, she began to feel more comfortable in the boat and the water. “Going on the Mangde Chhu, no fear came with me even though it is a harder section than Manas,” she explained smiling. “I thought to myself, ‘I can do it, and I will do it…’ and I did it!”

When teaching someone to kayak, there’s a fragile balance between providing both progressive opportunity and comforted protection. After weeks of daily training, we decided to take a significant step up and try a full day on the Class III/IV section of the Mangde Chhu. At the put-in, the team realized they had forgotten one spray skirt. Although Tshering had brought her gear, one of the guides mentioned she could just ride on the raft that day. An idea that presumably stemmed from a notion that we had to go slower with Tshering to reduce her fear (a tactic I fully support in kayak instruction for all students in general). In that circumstance, I replied that Tshering had brought all of her gear and had the skills to run that stretch of river, so it was her decision if she wanted to go in the raft or not. As one of the boys had forgotten a spray skirt, they could figure out who would go in the raft if Tshering still wanted to run the river that day. Tshering decided to kayak. 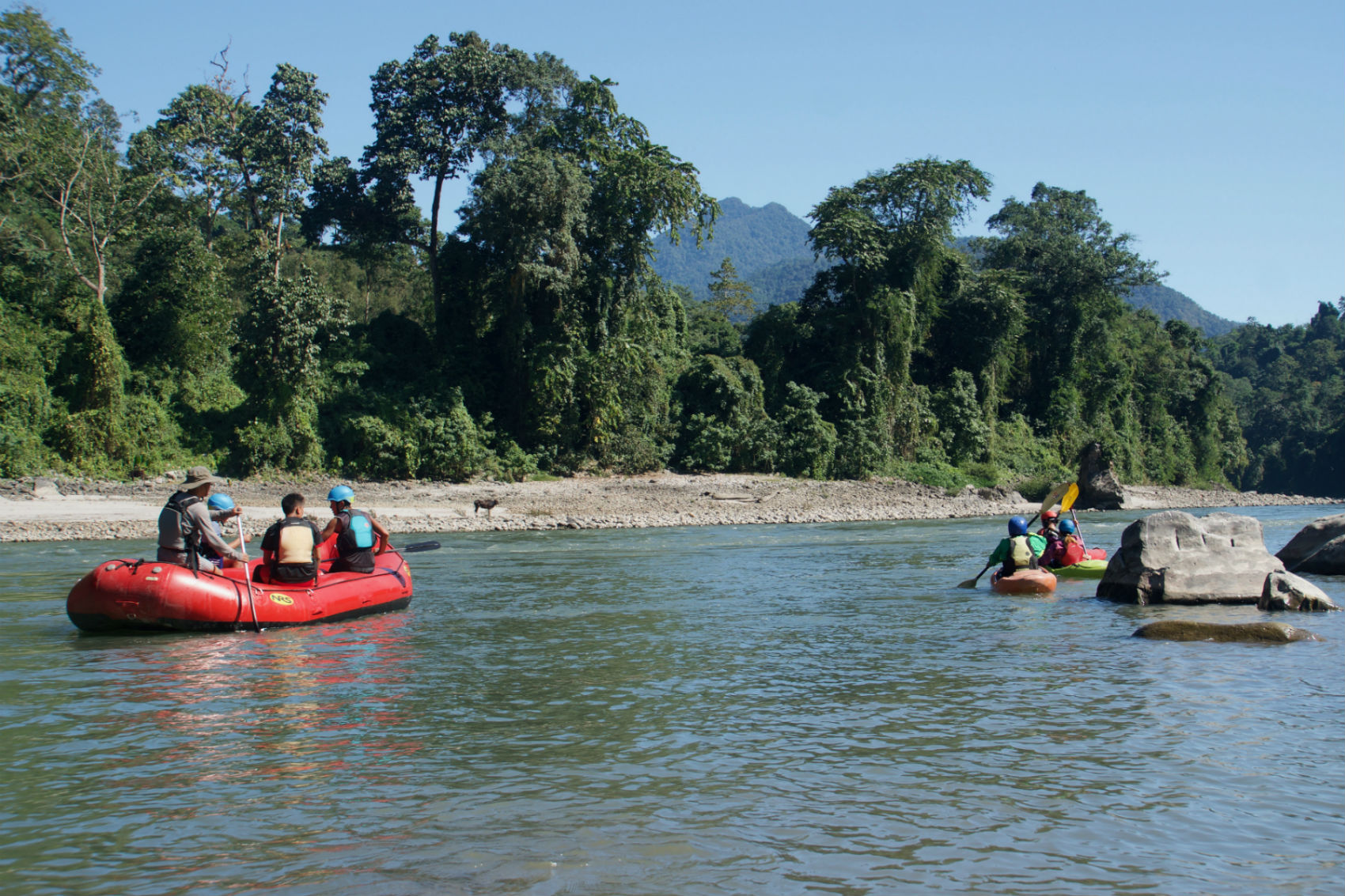 In Bhutan, there are two types of lines: “tiger lines” and “chicken lines.” Gathered at the put-in eddy that day, I told the team, “Today, we are going to run the chicken lines like tigers!” and then went over the game plan for moving downstream. While everyone kayaked like tigers that day, of the three kayakers on the water for that first Mangde Chhu run, Tshering was the only trainee who didn’t swim.

As is usual with beginning kayakers, different skills click at different times, and all the trainees excelled in various, exciting intervals. RGP recruited two of the kayak trainees, Rinchen Thopjur and Sangay Dorji who were young construction workers from nearby mountain villages working the remodel of RGP’s Marang Jungle Lodge. While they had no previous experience on the water, Khenda noticed their hard work ethic. A third trainee Sangay Phuntsho, had attended a previous RGP raft training, done very well, and was interested in learning more. 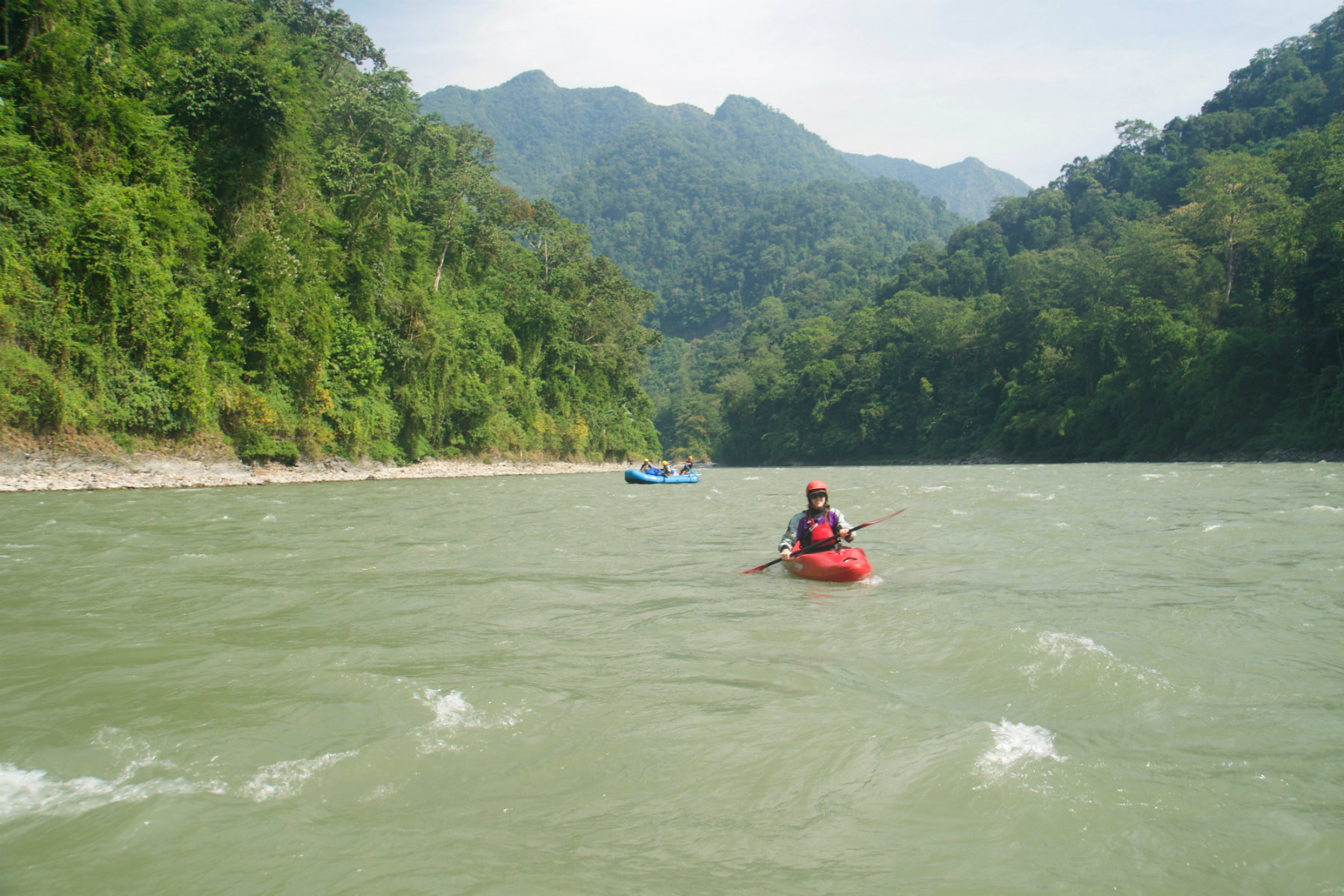 Despite countless Youtube tutorials and tries, two of the founding members of RGP, brothers Lam and Namgay had had some experience in a kayak and excelled with previous knowledge of being on the river, but throughout RGP’s existence, they had never had the opportunity to learn to roll. The River Guides of Panbang literally had a kayak and been waiting for six years for someone to teach them how to roll it.

At first, Tshering Choki had the most consistent roll of the team in training, but during our second week, she seemed to lose it, which is certainly not uncommon. After a couple of days of Tshering’s missed rolls, nineteen-year-old Rinchen ran up to me on my way to our morning meeting and said, “Today, we need to put all our effort into Tshering, so that we will all be on the same level. We need to support her, so today, you should spend more time with her. That way, we can all move forward together as a team.” 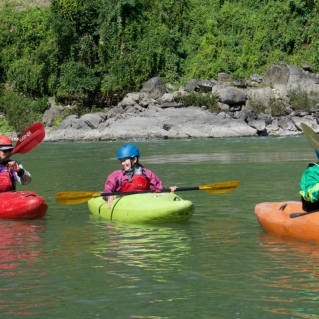 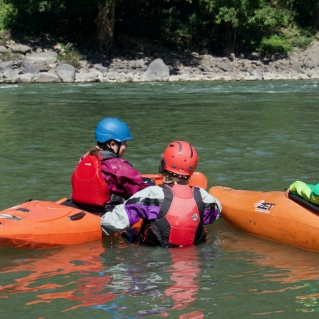 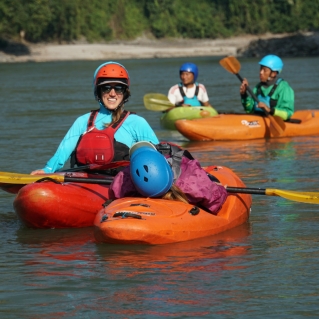 The team mentality of RGP and their trainees, and especially everyone’s genuine motivation to invest time and effort into Tshering Choki continually humbled me. Simply put, the instructor to student ratio (1:5-13) made one-on-one time quite valuable. But the team always insisted that I focus my attention on whoever seemed to fall behind in a given moment. Moreover, all of the River Guides of Panbang beamed when they talked about supporting the first female kayaker in Bhutan. 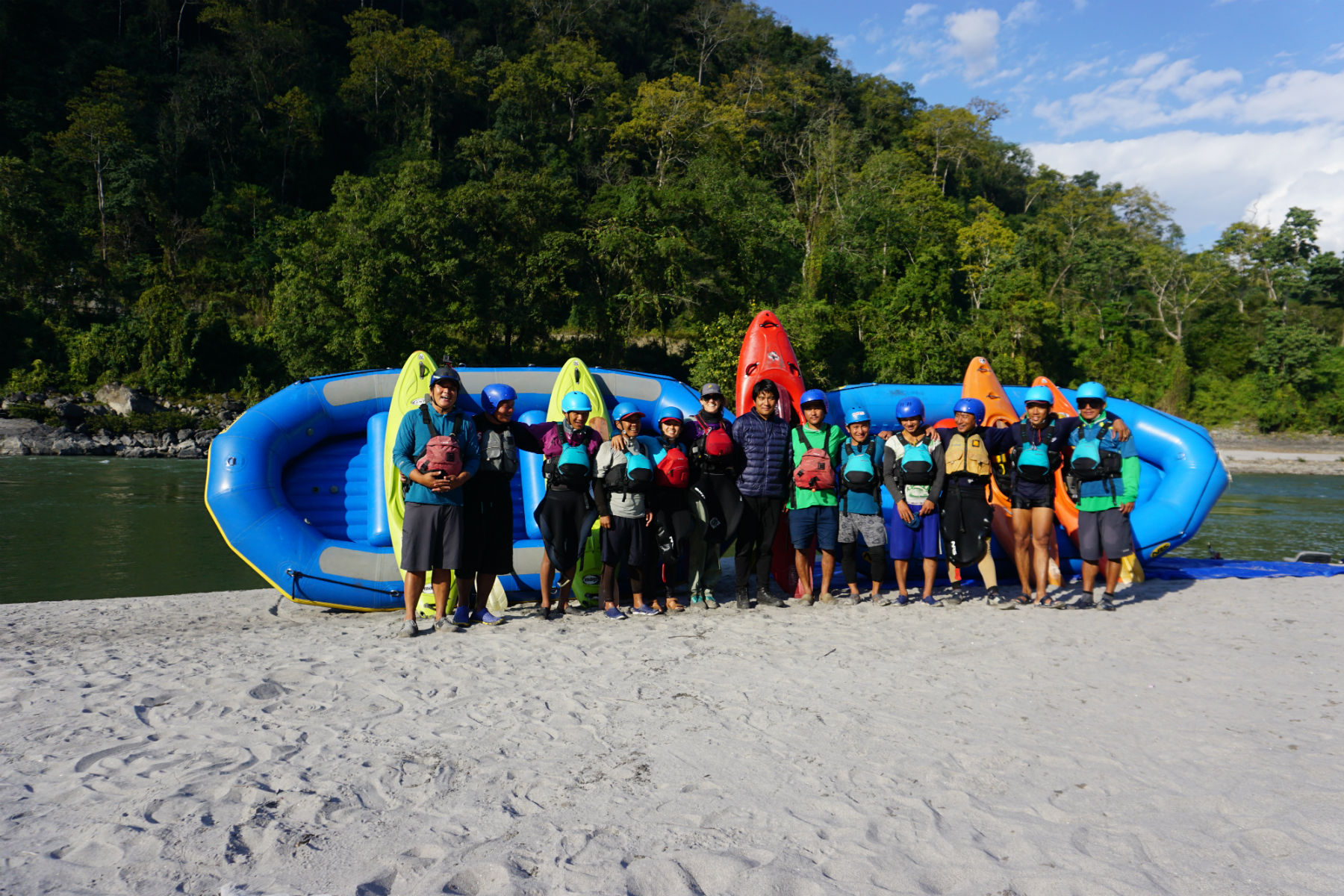 After I left in mid-December, RGP restructured their pricing so they could hire two safety kayakers with every trip in order to continue to progress Tshering and the others’ skills and provide employment to the next generation of youth. Tshering, Rinchen, Sangay Dorji, Sangay Phuntsho, Lam, and Namgay all safety kayak the Manas section now, and already, only a month after I left, Tshering Choki began teaching the country’s second female kayaker, Sonam Dema.

While expanding the opportunity for more women around the world to kayak and work in the whitewater world may “take a village,” at the end of the day, it all starts with one.