Retracing a First Descent on the Rio Apurimac

A magnificent vertical wall painted with white strokes looms ahead, emitting a somewhat ominous feeling as if a warning sign. In 1975, Giddings and his team had to camp in this area for three nights before finally finding any evidence of a feasible line through what they called the Acobamba Chasm. Thanks to their commitment to complete the first descent of the Apurimac’s main whitewater section, we can confidently enter this box canyon just before nightfall. For the last hour, each of us kept an eye on the banks hoping to find a decent camp spot without success. Forced to push forward, we aim for the exit of the gorge where Giddings’s book describes various sandbars that appear when the walls open. The low water prevents us from running the two main rapids and filming slows us down even more. To top things off, two out of our six-man team are sick. 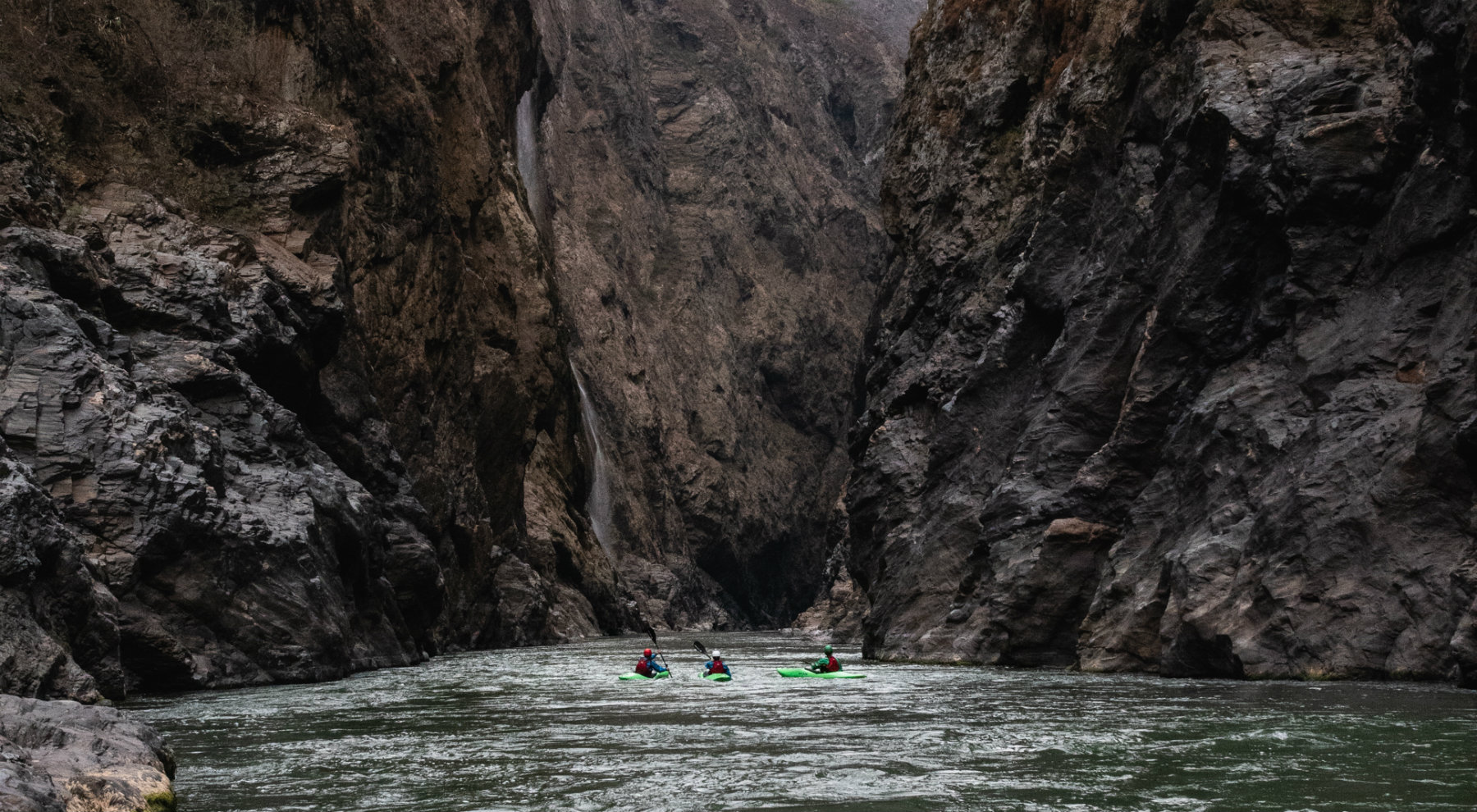 Peru’s Rio Apurimac is one of those places where no matter what is going on you have to stay calm and process methodically. We’ve all agreed to this motto: “We will scout every single rapid we don’t have a visual on the exit.” The second portage of that dusky hour is often paddled against the left wall with more water but is now feeding into a nasty undercut. After a straightforward but tiring stroll amongst massive boulders, carrying our loaded kayaks, we make it back on the water for a unique experience. The show the Abyssmo provides us is of mystical proportions. It’s so dark down here that the sky appears as only a white line drawn by the rims of the overhanging walls. I can’t imagine anyone other than kayakers has ever been here.

It takes us great mental efforts to kayak out of this very special place and seek a camp. As expected, banks re-appear shortly after the gorge and a nice sandy space reveals itself on river right about fifteen minutes before the pitch black Andean night settles upon us. We had paddled 42 kilometers since launching earlier that day. Making this much distance feels good. We refuel with a filling but vitamins-free dinner. The decision of going lighter for the tougher part of the river is nice for those long portages, but the bland dinner is hard to swallow. 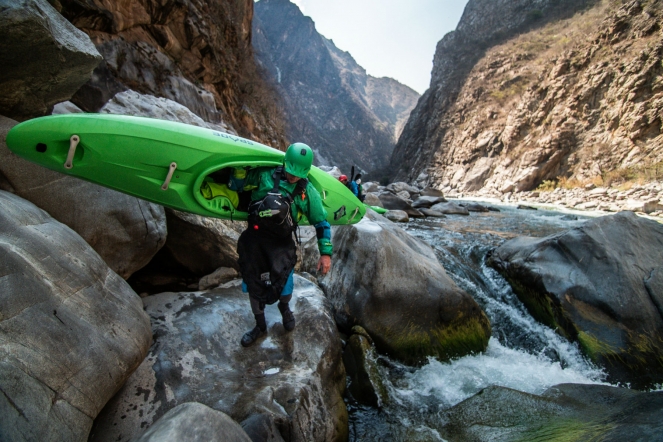 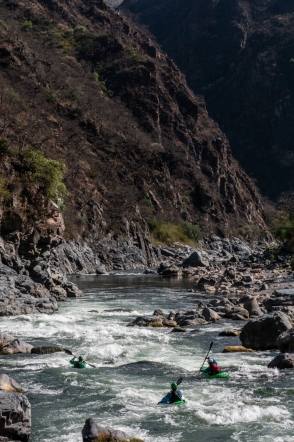 Our next goal is the Playa Rosalina bridge, where we can hike into the region of the Choquequirao ruins. Poorly known since Machu Picchu was discovered, the Incas believed this ancient citadel was the Cradle of Gold and many treasure hunters have tried desperately to find its supposed precious metal. But on-foot access appeared almost impossible.

Early on the morning of our ninth day, we hop in our boats dreaming of those ruins and of course, the tasty meal we hoped to devour at the campground by the bridge. At this point, we don’t realize that we’ve just entered the hardest and most dangerous part of the river. We’re exhausted by mid-day but we have to keep going. It takes us two full days of long scouts and longer portages but thankfully, the beauty of this unique geology along with amazing runnable rapids keep our spirits up until reaching camp. We reward ourselves with a bowl of well-deserved, tasty Lomo Saltado (beef sauté with rice and veggies) at Playa Rosalina. 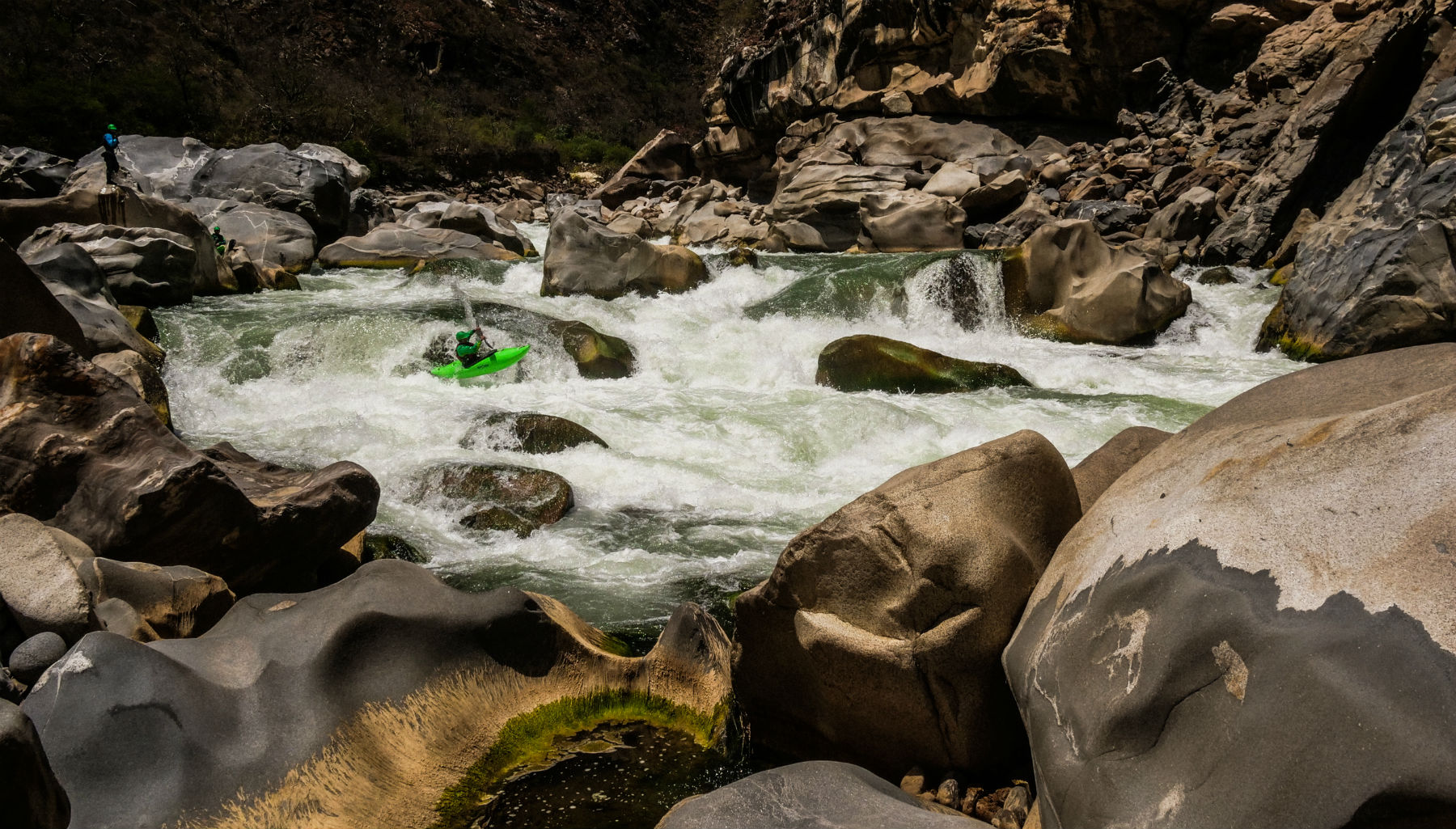 All seven of us are keen to hike the 1500 meters to check out the remote Inca ruins. We keep our packs light and start trekking up the steep trail on river right. It’s the first time in eleven days that we have left the flow of the Apurimac. For those eleven days, this river has been our everything. It hydrates and exhausts us, allows and challenges us from going down, entertains and scares us. Her voice slowly wanes into a faint rustle, though always present even so far down. The view from higher up is delightful and puts our last two weeks into perspective—the whitewater we’ve paddled and how far we’ve come.

We started a bit higher upriver than the usual put-in of Puente Tincoc but not as far up as Giddings crew in 1975. With easy road access, we gave ourself an extra day on the water through a beautiful class IV-V section. From then, the trip turned into a routine of stoke and good times on the river and at camp. We worked together well even though documenting the journey slows the pace by quite a bit. And now, eleven days later we stand on the trail to Choquequirao. 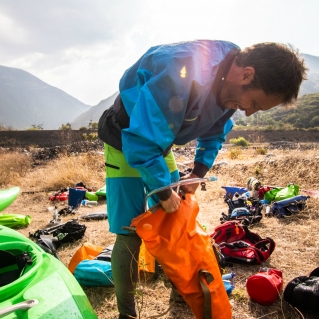 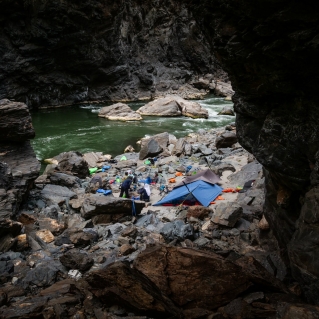 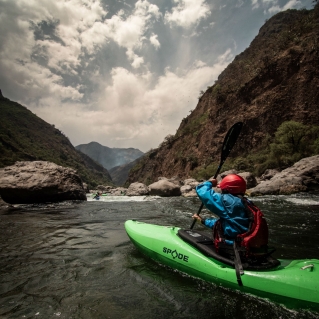 The vegetation turns greener and the temperature decreases as we gain elevation. After four, uphill hours, we reach Maranpata, a small village that provides campsites and accommodation for trekkers. We hunker down for the night and play cards as the sun sets around us.

With fresh bodies, we hike another hour in the morning until we’re sitting on the flank of the steep mountain looking down into the ruins. Exploring the remains of a civilization we know so little about is very intense. We follow the stoneworks which eventually lead us to the rim of the canyon, a visual preview of what we planned to paddle the next day. The ruins offered a very unique view of the tough class V boating but we could make out clean lines. Comforted, we start the return hike to meet our kayaks and put on for three to four more days of canyon paddling before reaching the jungle. At camp, we hope for fewer portages in our future since everyone’s legs are spent from the hike to Choquequirao.

The Apurimac roars providing us another two days of amazing whitewater, concluding the 100 kilometers of this world-class section. A few tributaries join the flow along the way, boosting the volume and making rapids bigger but cleaner at the same time. We maintain a steady pace, paddling from big rapids to boxed-in canyons. Even when we think it’s over, a few drops surprise us before we hit the confluence with the Rio Pachachaca, another tough Peruvian classic.

The Rio Pachachaca marks the end of the Acobamba Abyss. Relieved to have run the Apurimac without any problems, we take out at the Puente Pasajes bridge to enjoy a late lunch at the restaurant and try to resupply. Turns out, the village is deserted. The only two people we meet don’t seem very happy to see us and leave us without any information about where we could find food. A truck rolls in, passes us and stops to load bananas from the second unfriendly man. We learn the loaded vehicle is driving fresh goods to the cities up the hill. Amused to see us here yet not really believing our story, the driver agrees to sell us some bananas, plantains, yuka and corn. Even the crabby man finally relaxes and agrees to sell us two kilos of rice. Our diet remains unvaried but at least this fresh food is enough to last an extra three to four days if needed. 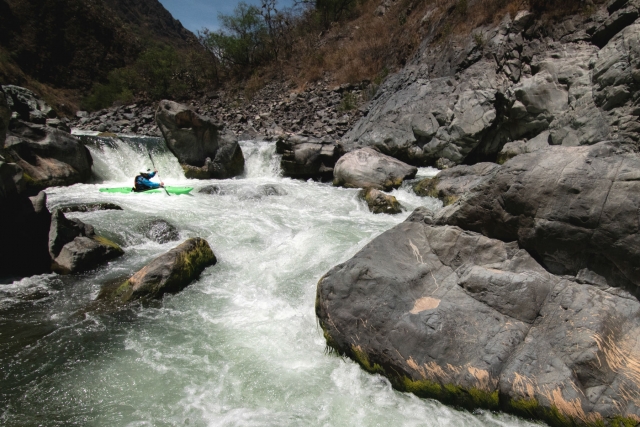 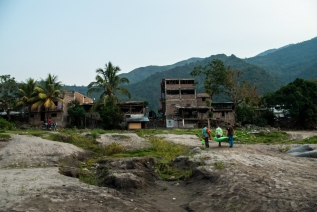 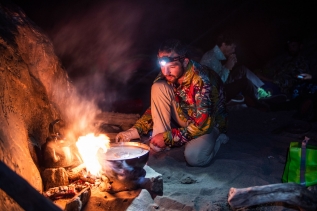 Although it’s late, we depart the empty village and launch into the last stretch of our trip. There’s little beta about this section of the river. We’re aiming for an average of 50 kilometers per day. Though, just around the corner, a major rapid halts our progress as most of us choose to portage. Afterward, fun class III+ big water rapids return. But at this time of day, the valley breeze makes it too difficult to paddle on the flats. We find a sweet campsite where the blue water of the Rio Pampas almost doubles the Apurimac flow. The valley is wider than what we’ve been used to until now and for once we have sun to set camp. We celebrate this moment with spicy salted popcorn and fried plantains.

Day 16 of our adventure starts early and soon the breathtaking landscapes appear one after another. The expected jungle feel is not showing up and instead, the cactuses and dry earth look like the set from a cowboy film. We make steady progress until the breeze picks up again and slows our progression through the bends of the river until it’s hardly fun at all. Dust flies in our eyes and it’s frustrating not being able to talk to each other. Quite suddenly in the afternoon we finally see a change in the vegetation. New insect noises appear, too, and we find a nice camp spot with a creek running nearby and grass to sit on. 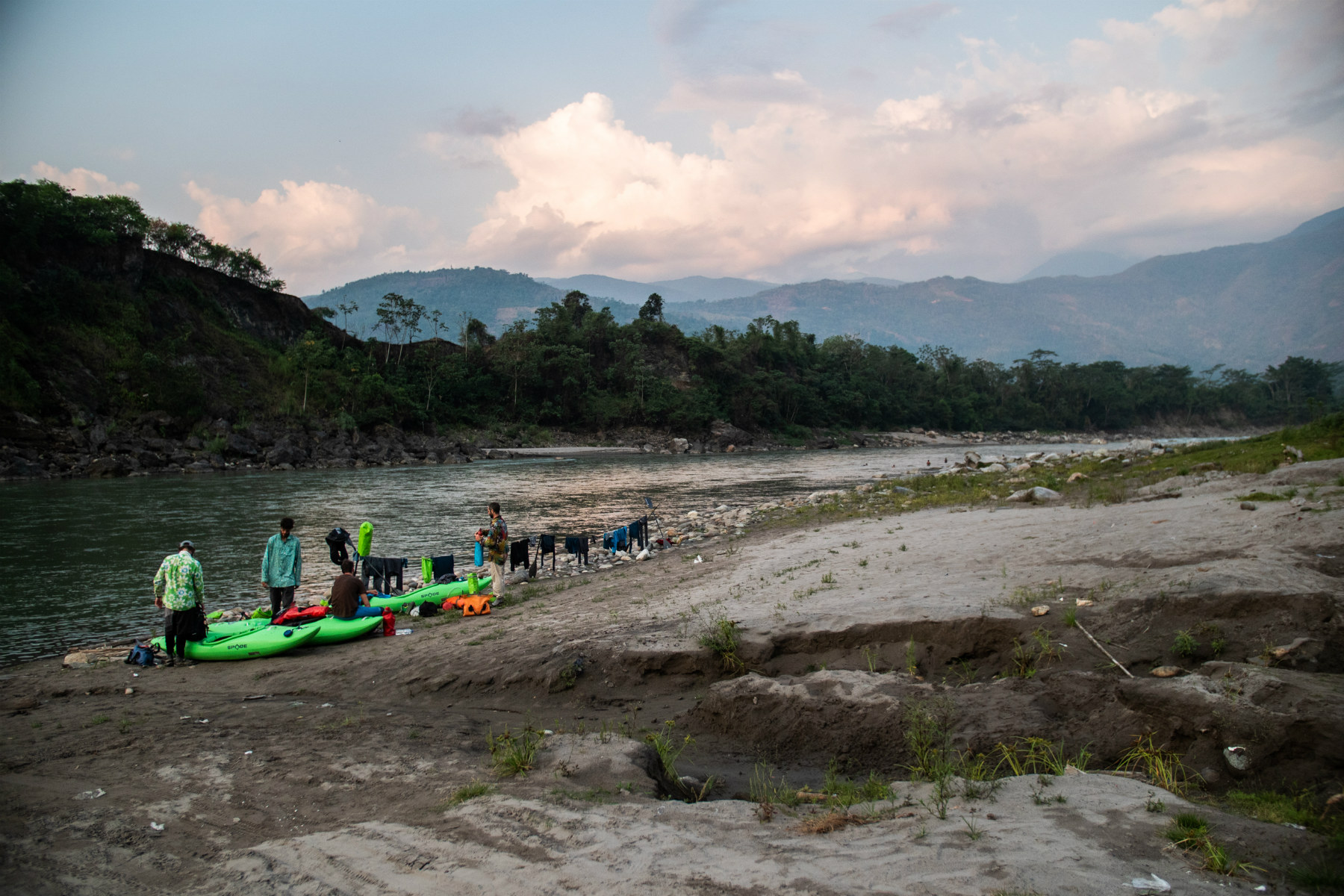 This is our last night by the river and each one of us have a different feeling about it. We are about to complete our objective to descend the main whitewater of the Rio Apurimac following the tracks of the first descent in 1975. The first descent took almost twice the time as we had. By the time they had reached the end, the team had split up. Happily, our crew holds together well, even though each personality is very different and the filming can wear your patience down.

Entering the jungle pleases us, but it also has a direct effect on night bivouacking: so many new bugs show up attracted by the headlamps. We opt out of playing cards and head straight under the bug nets after dinner. At least we’ll feel fresh for our final early rise. 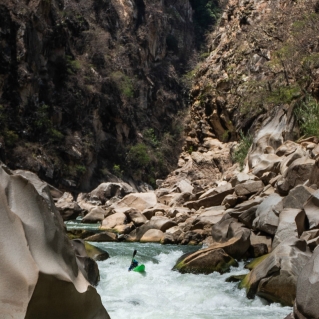 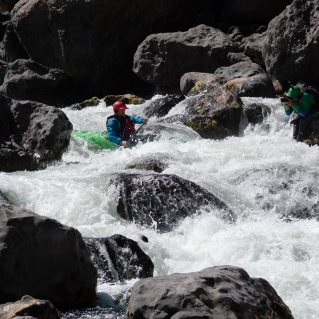 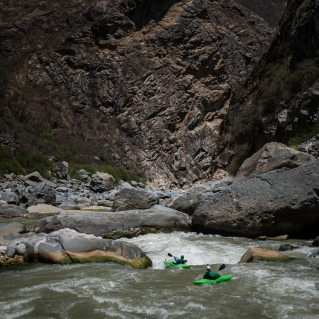 As we transition into the jungle, we also enter another gorge. This gorge is actually made by the low level of the river flowing in the bedrock and lasts for most of the day uninterrupted. The insects’ sounds are extremely powerful, almost overwhelming but the whitewater is fun, the waves bigger and faster than the previous day. As icing on the cake, the breeze doesn’t pick up this time.

After those last six hours of kayaking, we make it to village of Lechemayo, the first major village we’ve encountered on the banks of the Apurimac in over 350 kilometers. Leaving the next day at three in the morning, we easily find a ride out of this remote valley and back to the “real” world. 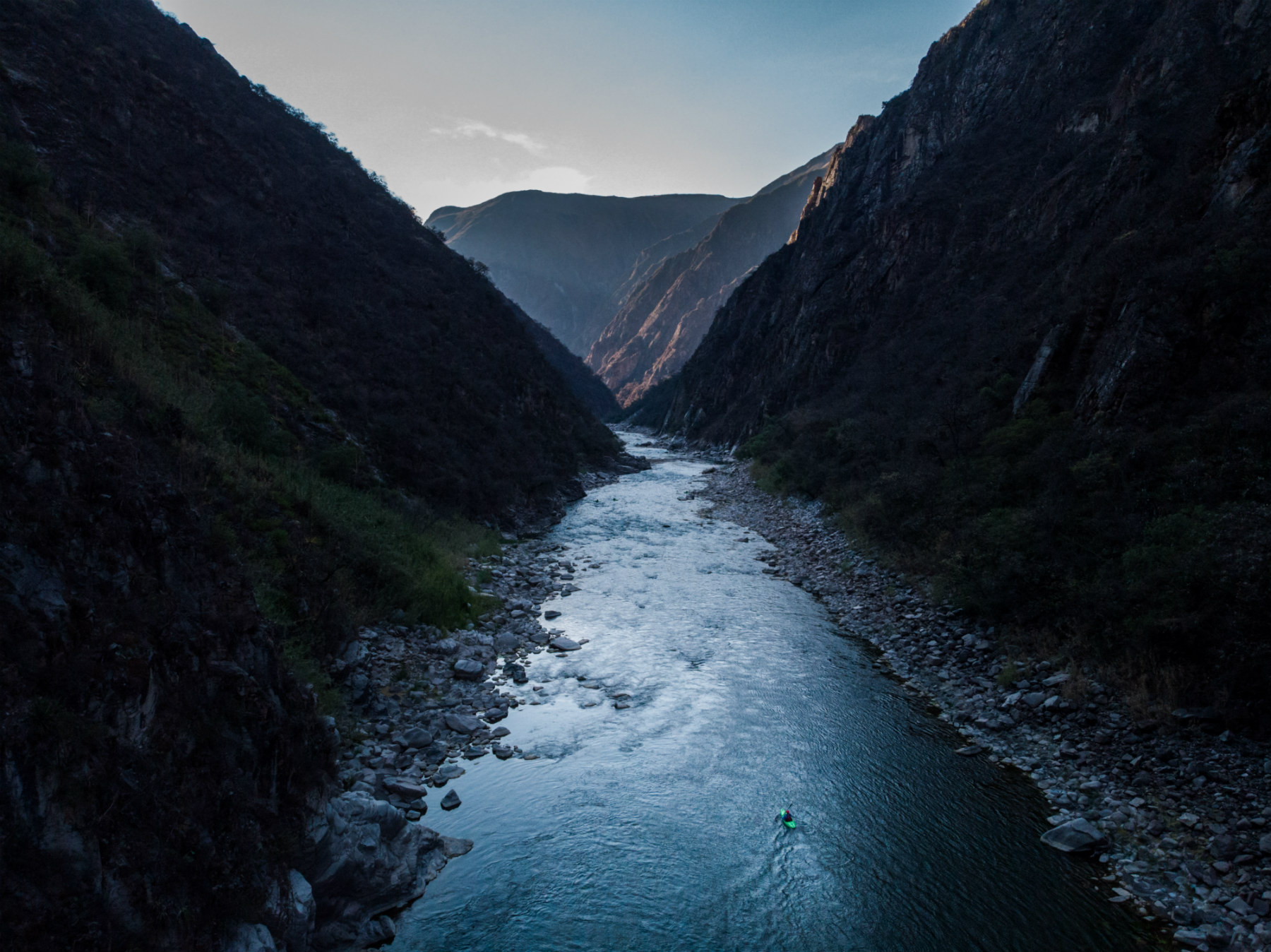 After putting on 17 days ago, we return to the routines of a “normal” lifestyle. Comfy chairs and restful nights in warm beds, hot showers and the relentless pings of emails and text messages. Such a different lifestyle. And we wonder, how long before the river call will be too strong to resist it?

Editor’s Note: Words by Mathieu Coldebella; Photos by We Are Hungry. “Retracing a First Descent on the Rio Apurimac,” tells only one part of the story. Be sure to watch the film, THE RIVER’S CALL from We Are Hungry.