To Catch an Eddy

The Salmon River rushes downstream; rapids continuously carve its meandering path. While the bulk of the river’s water continues on with the current, my eyes remain stuck on the eddy. A fraction of the water circles back upstream into a pool to pause, breathe, and slow down in its safe place. I feel the ebb and flow of the river in my own life through the rapids and eddies. Rushing downstream in high water, I charge the rapids head on as butterflies flutter in my stomach.

When I eddy out, the jolt of crossing the eddyline forces me to hang on so I don’t fall out of the boat. Time slows down as the boat climbs to shore. The calm of the eddy and the beach allow me to stall for a while. But eventually, I have to push back out into the current and let gravity take me downstream. My mind and body crave the comfort, but the river—and life—await. 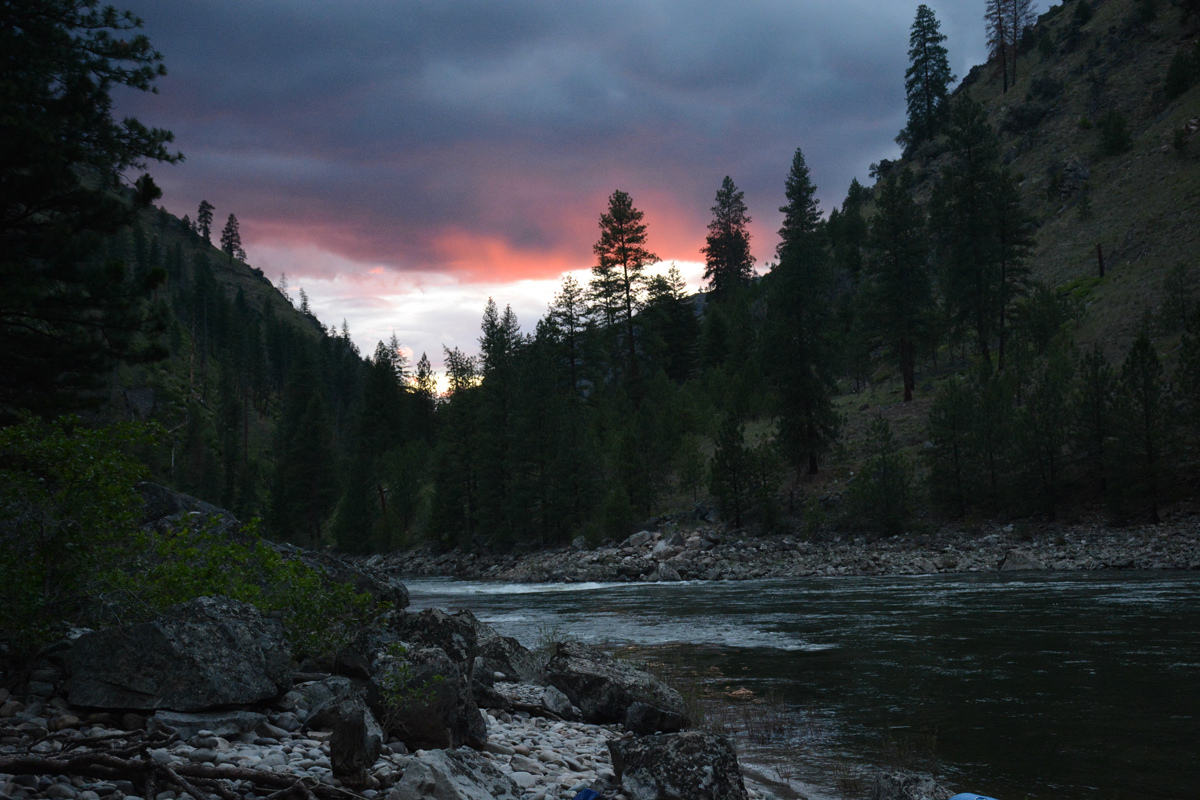 I eddied out for almost a decade while navigating migrations of seasonal work in the outdoor industry, which some refer to as “Neverland.” I worked as an outdoor educator and led quasi-intrepid kids on backpacking trips through the wilderness. I chased the ski bum lifestyle in a mountain town as a ski and snowboard instructor. Sometimes, I led trips across the world to places like Nepal and Ecuador. Though the years passed, I didn’t feel the pressure to find a career or a pull to make money. I preferred instead to sit on the beach, talk about the weather, and let time pass slowly. A year turned into six, then seven. I started to notice new wrinkles when I smiled, intermittent grey hairs, and light sunspots on my hands. Reminding me that time passes, even in Neverland.

After several years of content stagnation, I knew I needed challenge over comfort. Rapids over eddies. I solicited advice from my dad, which is generally best received from a barstool. I voiced fears of moving forward, fears of leaving things behind and not wanting to give up on fun. After hearing me out, he took a sip of his beer and said, “You know Steph, at some point, you realize you aren’t going to be young and cool forever.”

I had planted myself in a picturesque mountain town to explore adventure and beauty. I took jobs that left me living below the poverty line, and convinced myself I didn’t care. This place and these jobs allowed me to say, “I’m living the dream”—and it was cool. His words stung slightly, but the impending doom of not being “young and cool forever” provoked movement: it may have been slow or slight, but it kept me from standing still. 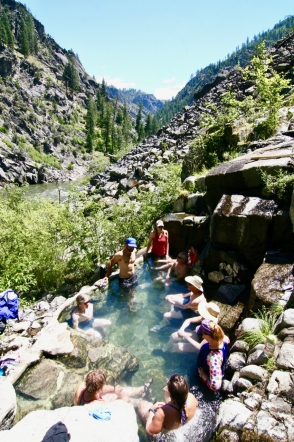 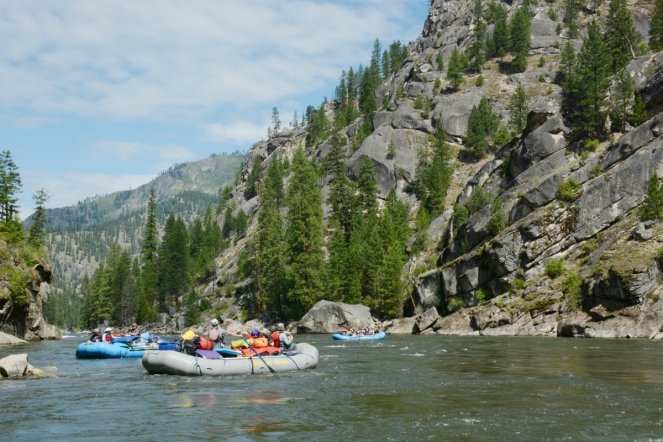 As the days on the Salmon pass, my focus shifts from the awe of the river’s movement to the observation of the river guides. Their laughter reverberates through camp each morning. They scurry around the kitchen to chop food, light stoves, grab eggs and other ingredients from the coolers that remain strapped in the boats. Coffee is ready to go for the bleary-eyed guests at 6:30 a.m. Eventually, they yell, “Breakfast!” and bang spoons on the pots and pans until we stagger over. Their jubilance makes me smile. They are entertainers. They recite stories of the Salmon River: big waves, burning forests, the wilderness history, the human history. 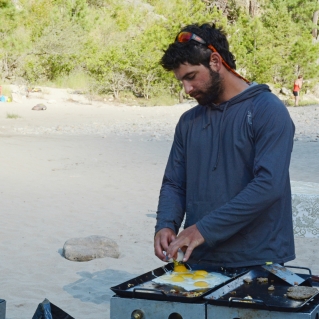 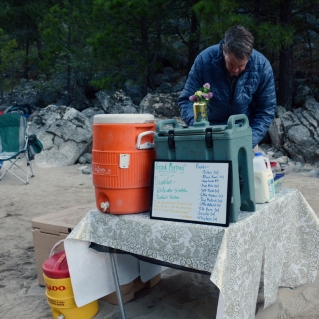 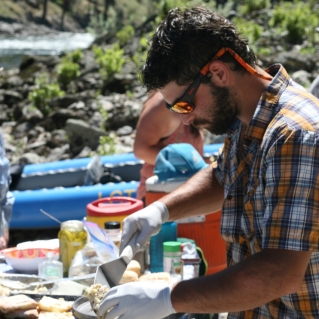 Most days, I sit lazily at the bow of Danny’s boat with my feet perched, watching the canyon pass by. Danny rows with grace, his eyes on the river, holes, eddies and the horizon. He sinks the oars into the water, effortlessly, changing the boat’s course. I envy the guides’ intimate relationship with the river and wonder, are they stuck in eddies too, or are they racing downstream?

I imagine myself in the center seat of the rowing frame. My heart says it wants to catch this next eddy and spend the summer with sand between my toes, sleeping under the stars. The water lapping at my oars while I dress in flowery shirts and flip pancakes in the morning. I feel younger than I am, I can escape what I thought I knew I wanted to do. On the river, I wouldn’t have to look at my crow’s feet in the morning, but I’d still see the sunspots on my hands.

One afternoon, Danny tells me there’s a bridge up ahead where we can jump off into the river. “Do you want to jump?” he asks. “Yes!” I respond emphatically. We round the corner, and the bridge comes into sight. It looks higher than I imagined. In a moment of confusion, our boats nearly float past the eddy when the trip leader announces no one wants to jump. “I do,” I say quietly, not assertively. I don’t want to hold up the group. Danny can hear the disappointment in my voice because of this lost life experience. He flips his oars, turns our boat toward the eddyline and rows us to shore, “We’re jumping off the bridge. We always jump off the bridge, and we can do it fast.” 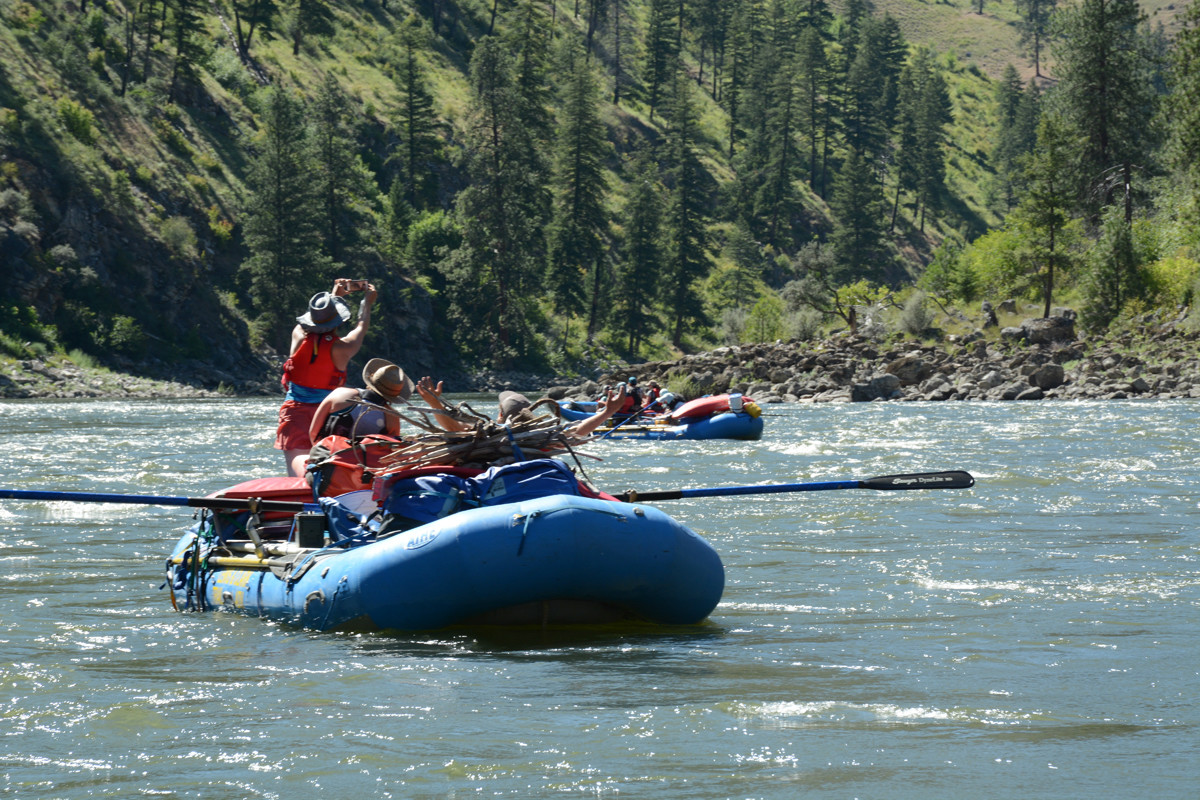 We hurry out of the boat and climb the short rocky slope to the bridge. My heart beats faster. My breathing becomes shallow and short and my gut feels a little sick. Must be those butterflies. I follow Danny; he seems rushed. He instructs me to climb over the railing and stand on the two-inch wide cable. “Face out,” he says. Getting my leg up and over seems harder for me than it was for him. I’m shorter, I think. I imagine tumbling off the bridge if I lose my balance. Sweaty palms and shaky hands grasp the bridge as I face out.

How high are we? Like 35 feet maybe? The water looks far away. “I’m scared!” I yell to Danny. I don’t remember what he says back, but Cory, another guide, docks his boat below and races uphill to join us. Neither of them wear shoes, even though Danny told me to wear mine. Cory hops over the railing with ease. Danny says we’ll jump on three. 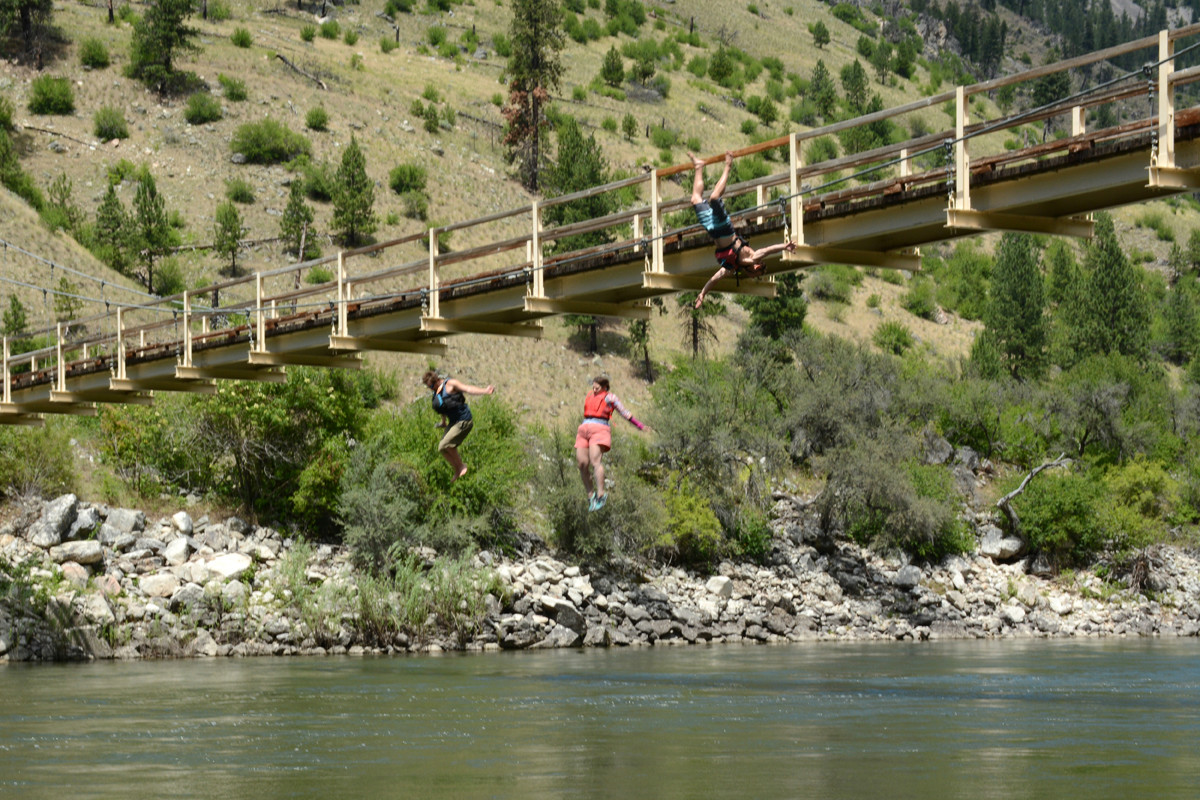 I know that if I don’t jump on three, I won’t jump. I hear him say “two,” I hesitate for a second, then I jump out leading with both feet. My legs flop out in front of me, I try to pull them back, but the water approaches quickly. My body slaps the water and I gasp at the sudden chill. I surface, breathe, and swim to shore against the current. I squeal with joy. Everyone cheers. Someone took a video. Danny looks happy, too.

Back in the eddy, I’m safe. But, I realize the joy and thrill of jumping off the bridge trumps the feeling of safety close to shore. Staggered breaths, a beating heart, and jumping in when I wasn’t sure I wanted to left me feeling wild. I don’t need to catch this next eddy to stay young and cool. I need to jump, with both feet first, into the river.

Editor’s Note: Guest contributor Stephanie Maltarich calls herself a Colorado native currently living in Missoula, Montana. In 2018, she enrolled in The Freeflow Institute to supplement her master’s degree in Environmental Studies with a focus on Environmental Writing.  Before returning to school, she spent ten years leading teenagers, young adults, youth and individuals with disabilities on adventures in the U.S. and abroad. She’s written for Crested Butte Magazine and Misadventures Magazine and currently interns with  The Freeflow Institute.