The Best of the Southeast’s Bike-Paddle-Run Races

Whether you’re a weekend warrior trying to squeeze in as much adventure as possible out of your short window of free time, or you just really enjoy pushing the limits of acceptable suffering, there’s something deeply gratifying about cramming multiple adventure sports into a single day. A morning run followed by a quick lap on a local stretch of river, capped off by a ride or a climb feels like a perfect day for an outdoor connoisseur with too many hobbies to pick a favorite. So it stands to reason that as the adventure world grows with opportunities for competition and racing, the classic run-bike-swim triathlon might take a different shape when it comes to multi-sport events.

Since we love to paddle and often build our multi-sport days around the river, we’ve compiled some of our favorite multi-sport events in the Southeast that include a paddling leg; some are notoriously brutal, some are for a good cause, and some are a little under the radar… but all are sure to test your limits and give you a good reason not to forget about your bike or running shoes next time you head to the river.

You’ve probably heard of the Green River in Saluda, North Carolina because of a little downriver race that happens on the first Saturday of every November, but you might be surprised to learn that fall is not the only time paddlers go fast and take chances on the Green River Narrows.

Every spring, a small but committed crew of folks sets off for an intrepid ‘baddle’—a bike and paddle—in honor of a lost friend and to raise money for a good cause. The race began in 2006 with the help of Jerry Beckwith, an avid rider and member of the Green River community who was diagnosed with Amyotrophic Lateral Sclerosis (ALS). The race began as a fundraiser for ALS research and family support, and now continues to do so while celebrating Jerry’s memory. 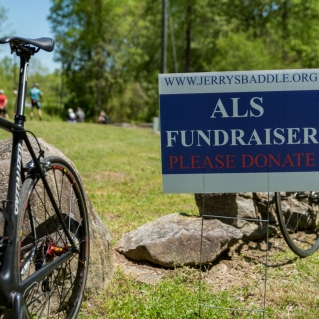 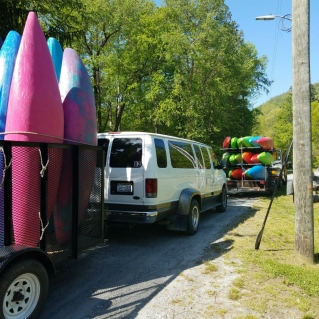 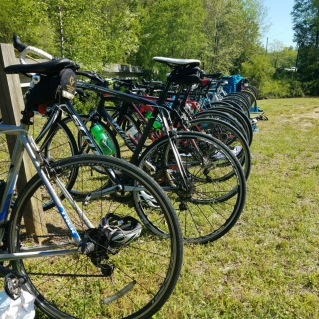 A downriver dart of the Green River Narrows kicks off the race before paddlers transition to bikes or tag in a teammate for the ride. The subsequent road-ride is no joke; if you’ve ever wound up and down the infamous two-plus-mile long switchbacks on the way to or from the Narrows take-out, you can look forward to that not being your only big climb of the day!

Jerry’s Baddle often sees first-time racers thinking about that first Saturday in November as well as veteran competitors getting a jump on their training, but a handful of racers and volunteers who come back to contribute and celebrate year after year make the event whole. After much self-induced suffering, racers, spectators and volunteers come together for a warm, homegrown celebration at the finish line to enjoy great company, friendship, and the memory of a good friend.

Racers sprint down the Class II Lower Green River before swapping paddles for pedals. But don’t sleep on this race just yet. The riding and running you’re about to do is some of the hardest in Western North Carolina. Racers will ride pavement four miles back upstream to access a rugged eight-mile trail loop in the Green River Gamelands for steep, technical riding. The final leg is all about the feet. Racers retrace their tracks, running the same trail route they just rode, letting runners relive the more than 1,700 feet of gain they encounter (again) mostly in the first six miles. 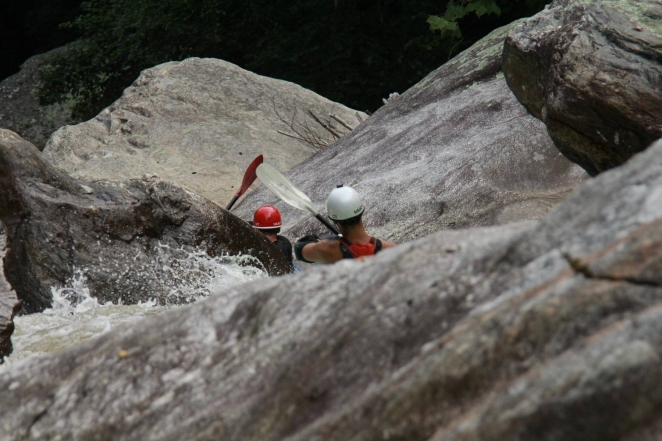 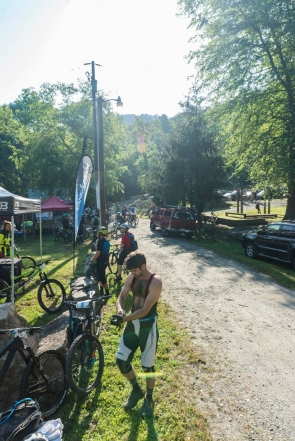 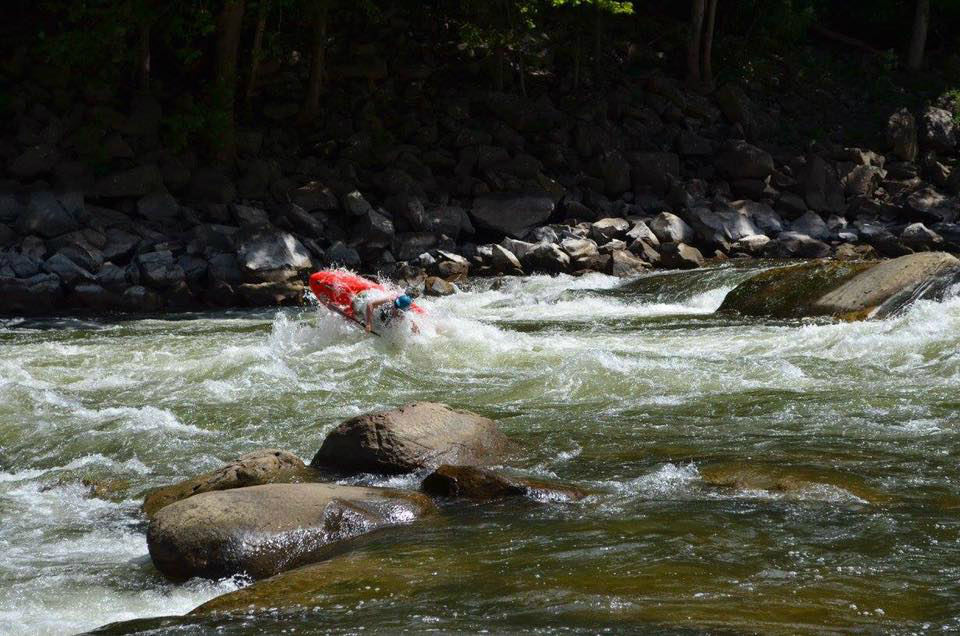 Perhaps one of the most iconic in the niche world of multi-sport paddling events, Captain Thurmond’s Challenge takes racers on a grueling romp up and down one of the oldest river gorges in the world. Take on this challenge as a relay, raft team, or individual. Regardless of your approach, toe that start line prepared to endure 28.5 miles of all the best adventuring that West Virginia has to offer in the dead heat of August.

Suffering begins at the start line in downtown Fayetteville where you’ll ride mostly singletrack to descend into the New River Gorge to the paddler’s put-in at Cunard, but don’t go thinking it’s all downhill, or that it’s all easy. Once you transition from wheels to water, get ready for a long sprint down ultra-classic Southeastern whitewater for several miles of Class III-IV+, big, boomin’ fun. Still have it in you? When you hit the take-out at Fayette Station, you’re so close, but still so far away from your reward as your remaining mission requires a final 1,100-foot ascent on foot. 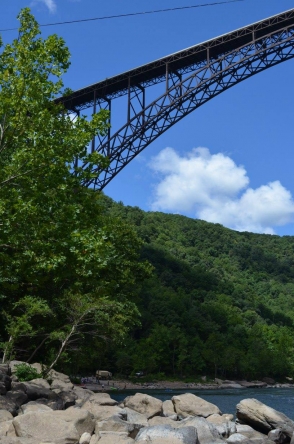 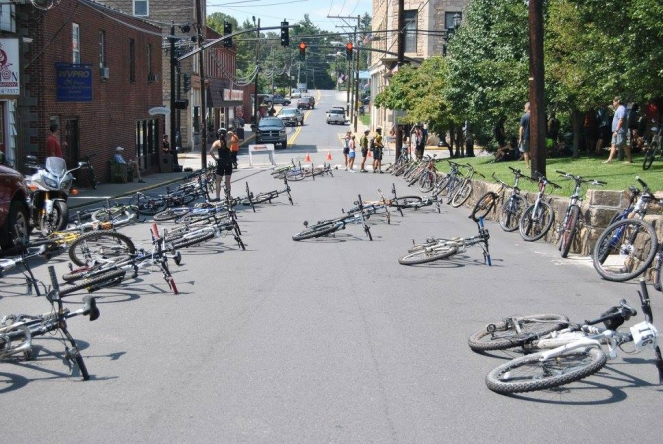 While each leg, individually, might not be the toughest ride, paddle, or run you’ve ever done, you can be sure that when stacked one after the other, this will make for one of the most demanding adventures you’ve ever tackled. Racers, spectators and volunteers will undoubtedly enjoy post-race festivities in Fayetteville, with famously good food and unbeatable scenery.

While the whitewater leg in the New River Trail Challenge, which showcases Virginia’s New River Trail State Park, might be some of the more accessible on this list of multi-sport events, prospective racers shouldn’t count this sufferfest as remotely easy. Class I-II whitewater and ground surfaces mean much longer race segments and much more necessary training prior to race day if you want to make it to the finish line.

Front-of-the-pack-ers fly downstream in high-performance sprint or sea kayaks, surf skis, and even Wildwater boats. Seasoned competitors liken the  requisite fitness training to that of a half-Ironman. 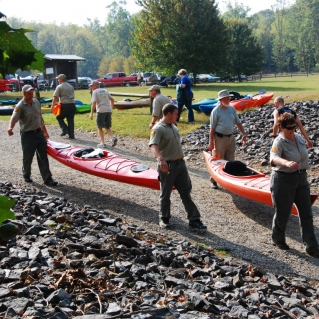 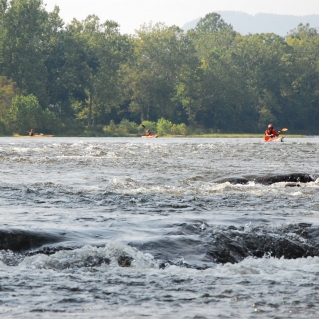 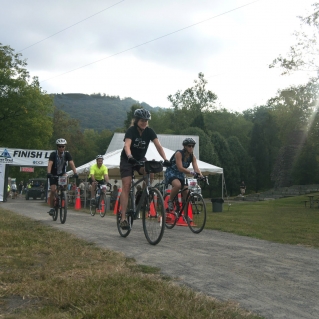 Don’t be scared away, though, the New River Trail Challenge sees solo racers and teams of all backgrounds and skill levels, and the paddling portion accepts a variety of design, from the aforementioned to recreational, sit-on-top, and even whitewater-specific boats. A small race field capped at 300 participants ensures a smooth operation, and racers and spectators alike can enjoy post-suffering food and drink of local flare.

This multisport battle is core: relatively small and restricted to whitewater designs only (no keels, no sea kayaks). The urban adventure community that has sprung up around the James River in downtown Richmond, Virginia has shaped the King of the James race. Basing out of Forest Hill Park, racers will get to enjoy some of the best urban adventuring the southeast has to offer while linking up segments of mountain biking, running, and whitewater paddling.

Each year, organizers of the King of the James make some adjustments in the order of operations and the distances of each leg. For instance, last year’s race kicked off with nearly 10 miles of tough mountain biking before transitioning to a trail run. But, don’t worry about getting bored as you’ll pound the dirt on a different trail than you rode just to keep you on your toes! Finally, you’ll hop in your craft of choice for what you think will be the easy part, but have you ever tried sprinting downstream through Class III when you’re already gassed? This year, that entire order could change. The unpredictable nature of the course keeps competitors coming back year after year. 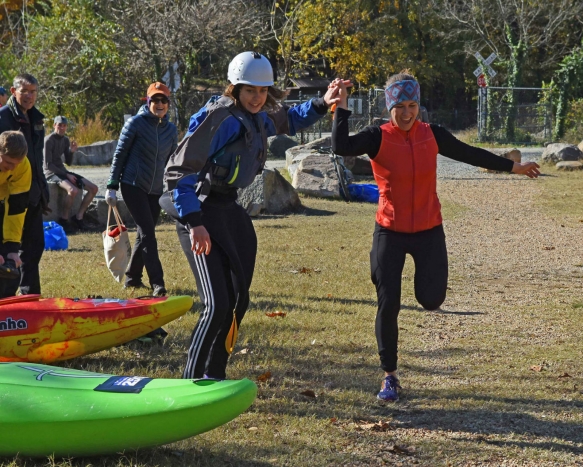 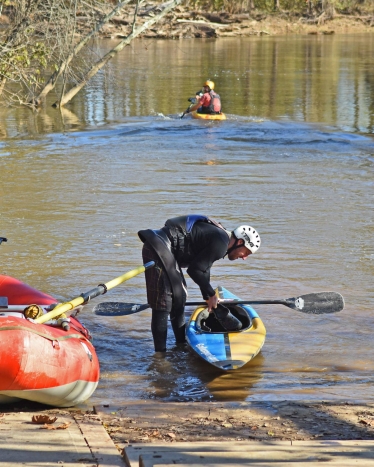 If you can keep it together for 2.5 miles of concrete jungle whitewater, you might be the next King or Queen of the James. Hosted by the James River Outdoor Coalition, the King of the James event raises funds and awareness for this urban adventure paradise, showcasing the diverse opportunities to get outside and play in downtown Richmond, and continuing support for park improvements and access.

‘Baddlun’ is an amalgam of bike, paddle, and run, and your first backyard baddlun is only waiting on you! Some competitive Baddluns are a little less official than those listed above, flying a little bit under the radar and maybe just starting out as a group of friends trying to push each other. Many of the southeast’s classic whitewater runs are proximal to networks of trails or bike paths excellent for running and riding, begging for a multi-sport adventure with the promise of eternal (or annual) glory for a few and a great time for all, although it will likely be that ‘Type B’ kind of fun.

Check your local paddling boards for info about some of these lower-key Baddluns to find out if there’s a multi-sport race you should be in the know about, and if there’s not, it might be time for you to take the reins and make your own. Fitness tracking platforms like Strava make it easy to set official courses and start some friendly competition if you’re looking for motivation, and if your favorite stretch of lake or river happens to pair well with a run, ride, or both, you might be well on your way to ‘baddlun’ your friends.