Packs and Paddles in the Desert: The Long Way to Lake Powell

“We are going to carry these things HOW far?” My friend Kate is straining under the weight of her backpack loaded with six days’ worth of overnight gear and food, a three-piece carbon paddle, and an 11’6 Escape inflatable standup paddleboard.

Maybe my planning for this trip was a bit over-ambitious. You see, I love SUPs and I love the desert. I’ve been able to combine my passion for both on the occasional Lake Powell adventure in the past, but those lake trips present one logistical problem: the lake is massive and getting to some of my favorite spots in a human-powered manner isn’t easy, no matter how you slice it. 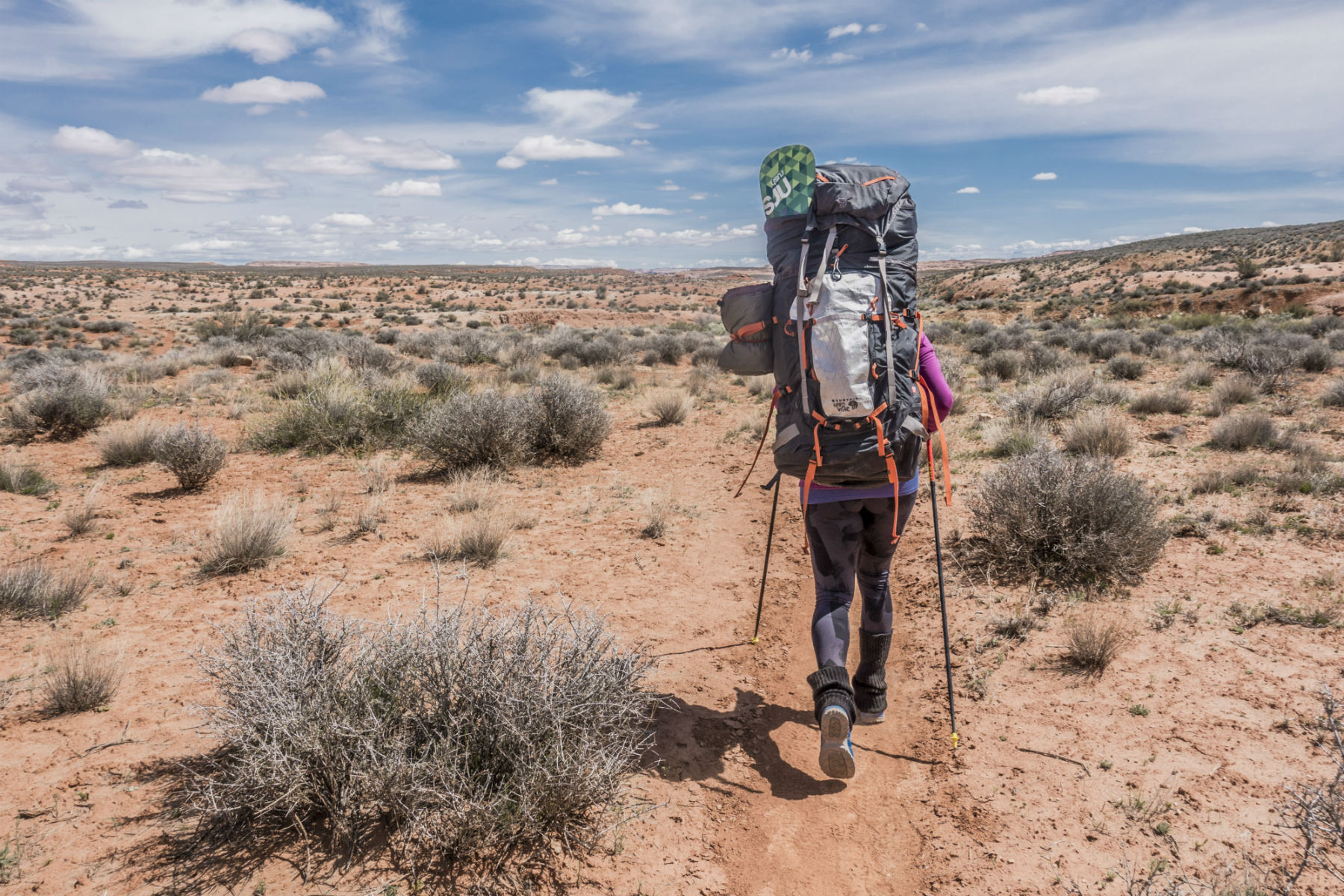 I first paddled an SUP on Lake Powell in 2016. Drawn by an otherworldly photo of the elusive Cathedral in the Desert, I put in at the drive-up marina in Halls Crossing. Equipped with overnight gear and food for nine days, I had to paddle 26 miles down the rather unexciting and tedious main arm of the lake in order to get to the sidearm where I actually wanted to spend my time. This was before I had any NRS gear; my cheap inflatable SUP punctured and very nearly committed all my belongings—camera included!—to a watery grave. Still, that week+ solo SUP trip turned into one of my best-loved adventures of that season and made me crave more of the same.

I went back for a second round a year later. This time, with better gear and friends and a different plan. Instead of dealing with the marathon paddling approach to my favorite flat-water paradise, the Escalante arm, we would arrive at the lake from the north via forty miles of dirt road and five miles of cross-country slick rock hiking in order to access the lake through Davis Gulch. Five miles on foot aren’t much by my standards (I have a penchant for long endurance missions on the trails), but they culminate in a steep descent to get into Davis Gulch and the Escalante. After our little group spent the better part of a day slogging through one-mph terrain, I could confirm what I had already been suspecting: the slick rock hike into and back out of Davis Gulch is laborious; I wasn’t keen on repeating it on future trips any more than absolutely necessary. 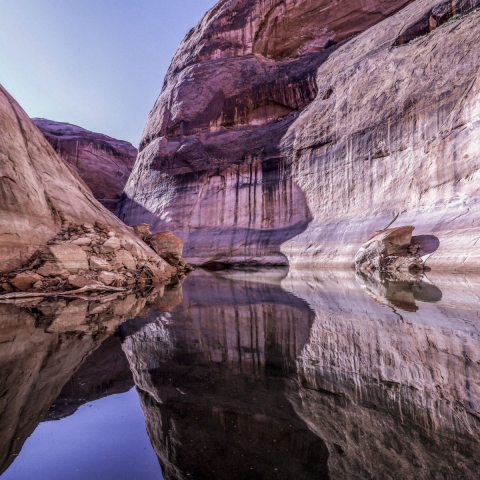 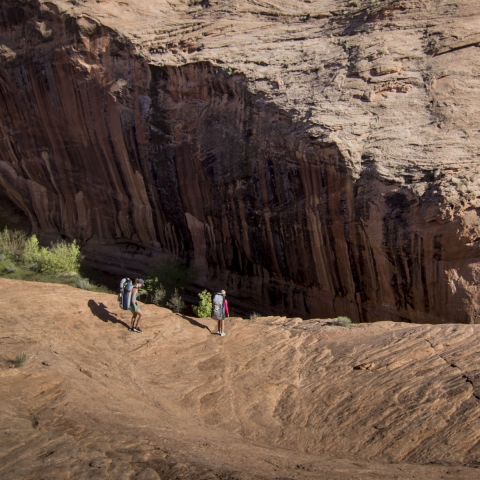 The slick rocks of Davis Gulch.

Then, two years later, Kate calls. “This SUP thing looks so fun. I’d love to give it a go.” We block out a week on our calendars, and I get to work planning. This time, I decide to opt for an even more extreme overland version: if you have to carry your SUP for more than a few hundred yards, might as well do it on the scenic route! This time, we would fully embrace the hiking portion of our SUP adventure and carry the boats through the length of what is commonly considered the crown jewel of the Escalante region: Coyote Gulch.

Desert aficionados know that Coyote Gulch is a hike beyond compare. Gorgeous arches, massive alcoves, a plethora of dazzling waterfalls and even a natural bridge conspire to make this side canyon of the Escalante a world of its own. With its terrific camping, beckoning shade and ample fresh water Coyote Gulch is a magnet for backpackers from all over the US, which is also the reason I’m keen on showing this little piece of paradise to my desert first-timer friend. 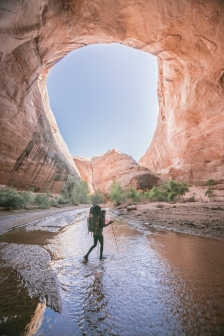 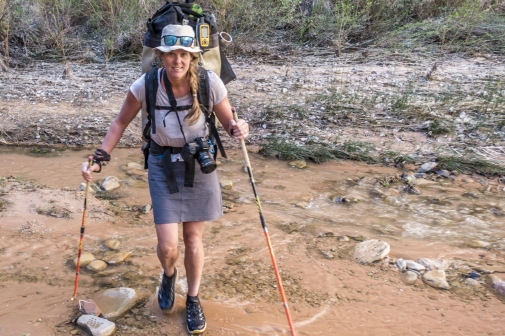 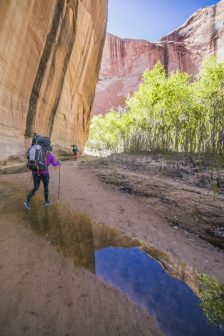 But I know that the Coyote Gulch approach means we’re in for multiple days of heavy carrying in order to get to and from the water—a real hurdle, seeing as Kate is a city-dweller who has never backpacked before. To lighten our loads on the 13-mile approach, I enlist the help of my husband, Paul, who is always game for hard work if it comes in the form of a good adventure. Off we go after obtaining our free overnight permits from the Escalante Interagency Visitor Center: “Number in Party: 2 – Trip Length: 6 Days – Destination: Coyote Gulch / Escalante River / Lake Powell – Watercraft: Yes – Pack Animals: 1 – Type: Husband.”

So, that’s it: our plan. Kate, Paul and I start hiking from our cars at the Hurricane Wash trailhead on a Friday morning, SUPs and paddles fitted tightly into our massive packs. A day and a half later, we reach the confluence of Coyote Gulch and the Escalante River. This is where Kate and I get to work: we empty our unwieldy backpacks, roll out the SUPs and start inflating our boats.

From here on out, the SUPs will carry us rather than vice versa. There is only one more obstacle between us and the beckoning flat water of Lake Powell: some six+ swift water miles on the Escalante River, which are completely new terrain to me.

Kate and I have been through thick and thin together—her penchant for adventure is just about as strong as mine despite her much more urban life—but neither her nor I know anything about standup paddling whitewater. With a healthy dose of naivety and an equal amount of optimism we get situated on our boards, keep the fins off, and launch—straight into a small rapid that keeps us on our toes (or rather: knees).

Turns out the river is mostly mellow, cataract free, and the flow just high enough for our boards. We make quick work of the six or so miles that, according to the map, separate us from the lake. I’ve explored the mouth of the Escalante river before and remember it well: lush vegetation on the riverbanks, towering sandstone canyon walls, and a quick transition from the robust flow of the Escalante into a seemingly bottomless lake.

Well. That was three years ago. This time, despite record snowpack over the winter, the water level in the lake is about 40 feet lower than the last few seasons. Six river miles turn into eight, then ten, floating through a dust storm, past a post-apocalyptic landscape of dry dirt and desolation, formerly floating buoys marooned in desert dust. The farther we go, the less water there seems to be. 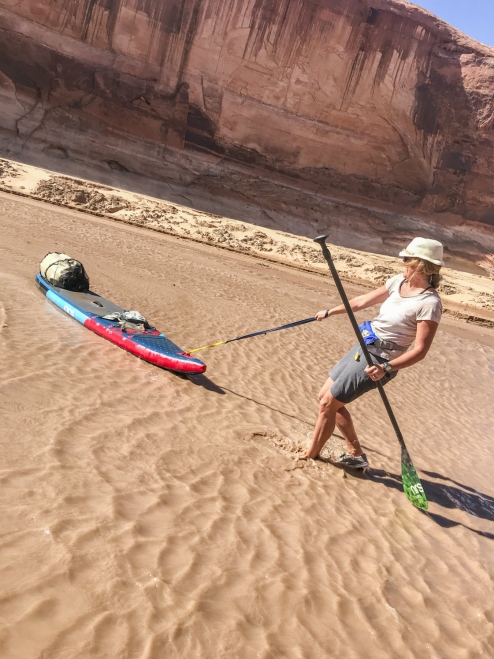 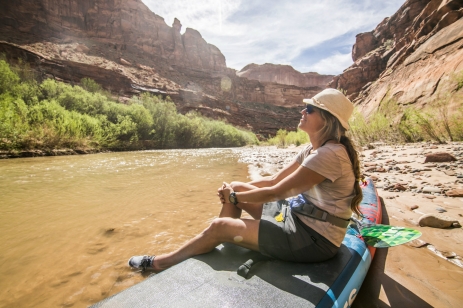 Resting on the banks of the Escalante. 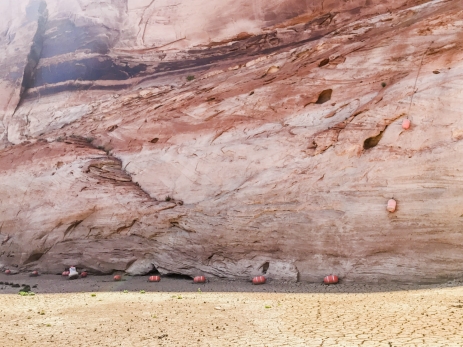 Stranded buoys along the banks of the Escalante.

While I’m starting to question my sanity as well as our ability to reach the lake by evening, Kate digs deep and finds humor in this waterless epic as the Escalante becomes wider and muddier by the minute. I finally give up on paddling altogether and get off my board to drag it through quicksand, only to abruptly fall into the lake when we finally do reach the mouth of the river.

It’s four o’clock in the afternoon and I’m exhausted. Across the mouth of the river lies a small barren island, newly emerged from the lake’s receding water levels. The island offers no protection from the elements, but after our epic lake-finding mission it beckons. A few minutes of hard paddling against the wind get me to the hard-crusted beach, where I promptly stumble across an unopened can of IPA that has clearly been around for a few seasons but is undamaged and full of liquid gold. Luck must be back on our side. 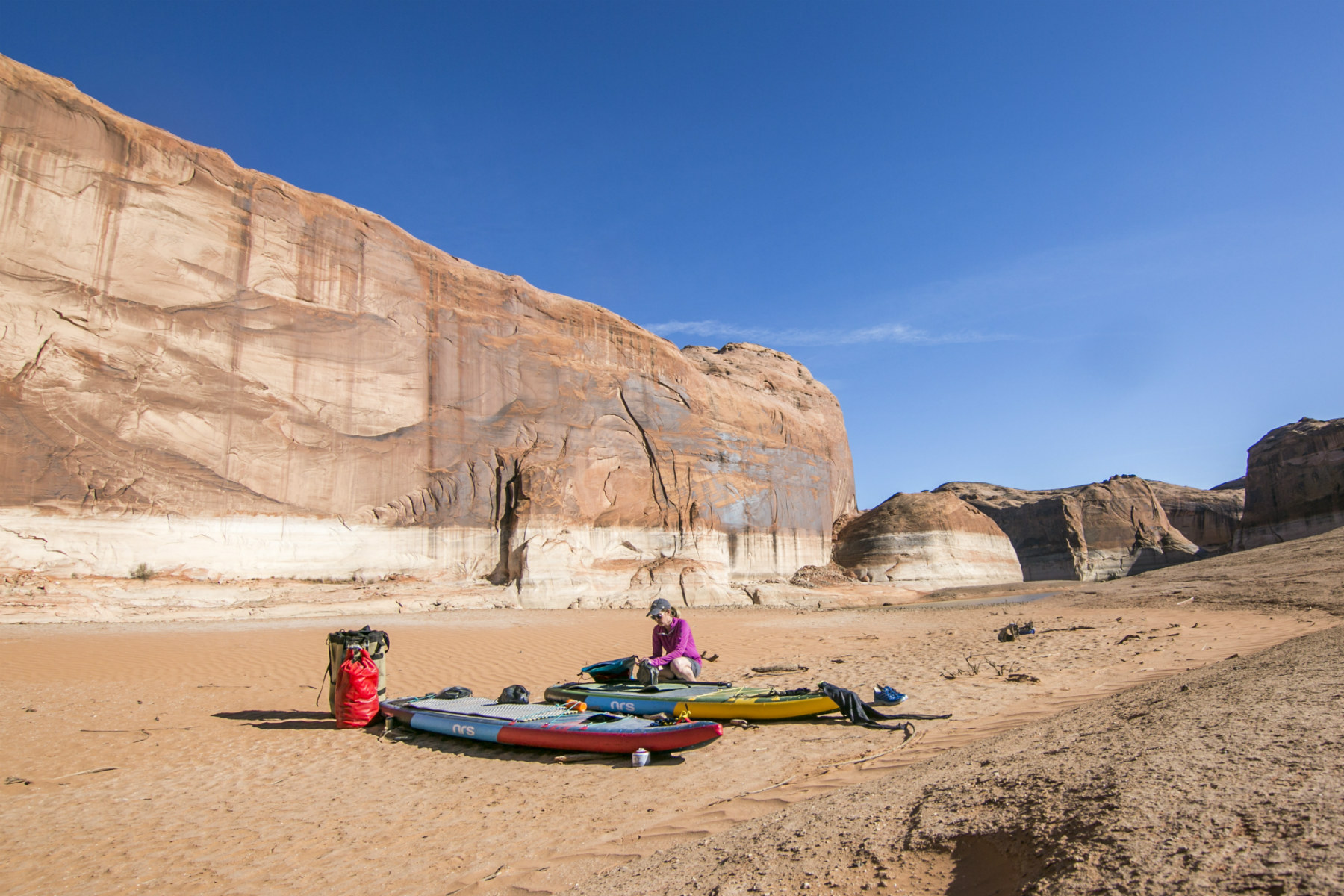 We settle into camp early to rest our tired bones, using our paddleboards as giant inflatable air mattresses for a night out under the stars. As so often on the lake, the wind dies down at sunset and we get to enjoy a beautiful open bivy.

Now, this is why I love paddle boarding on Lake Powell: beautiful glassy flat water surrounded by the enormousness of gorgeous sandstone walls; secret camp spots among hidden beaches and massive alcoves and a plethora of twisty side canyons to explore, sprinkled with Indian ruins and mind-blowing natural features. 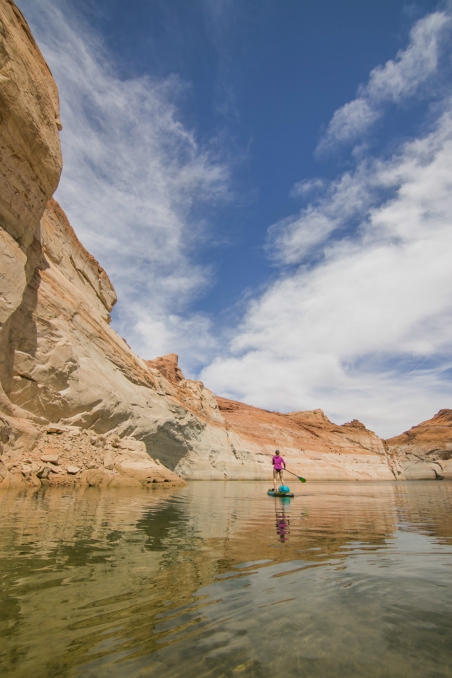 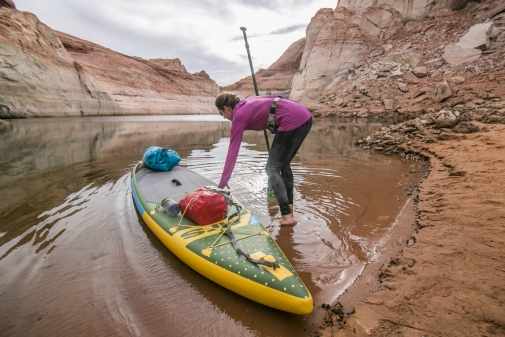 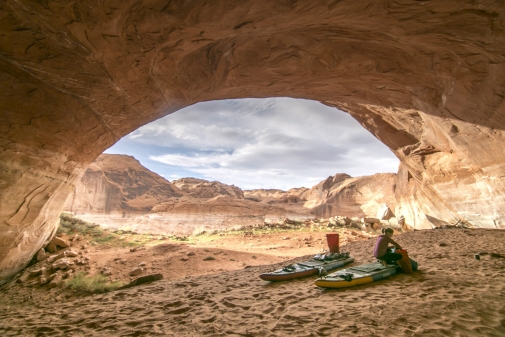 Kate and I spend two more days and nights reaping the rewards of our hard-earned lake time. We paddle and play among a true sandstone paradise that we have almost entirely to ourselves. The boating season for Lake Powell hasn’t yet kicked off. After exploring up and down the lake we transition back, first to quicksand and eventually, solid ground in Davis Gulch, where we enjoy one final night camped right by a natural arch—tired, happy and full of new deep desert memories.

All that’s left for us to do is to find our way back to civilization, to hike out to our cars—and by the time we have done that we will have carried our SUPs for over twenty miles, floated the Escalante River for ten, and paddled another fifteen or so miles of flat water on Lake Powell proper. Overambitious planning? Maybe, but with memories like the ones that we got to make you can bet that I’m already busy dreaming up the next adventure! 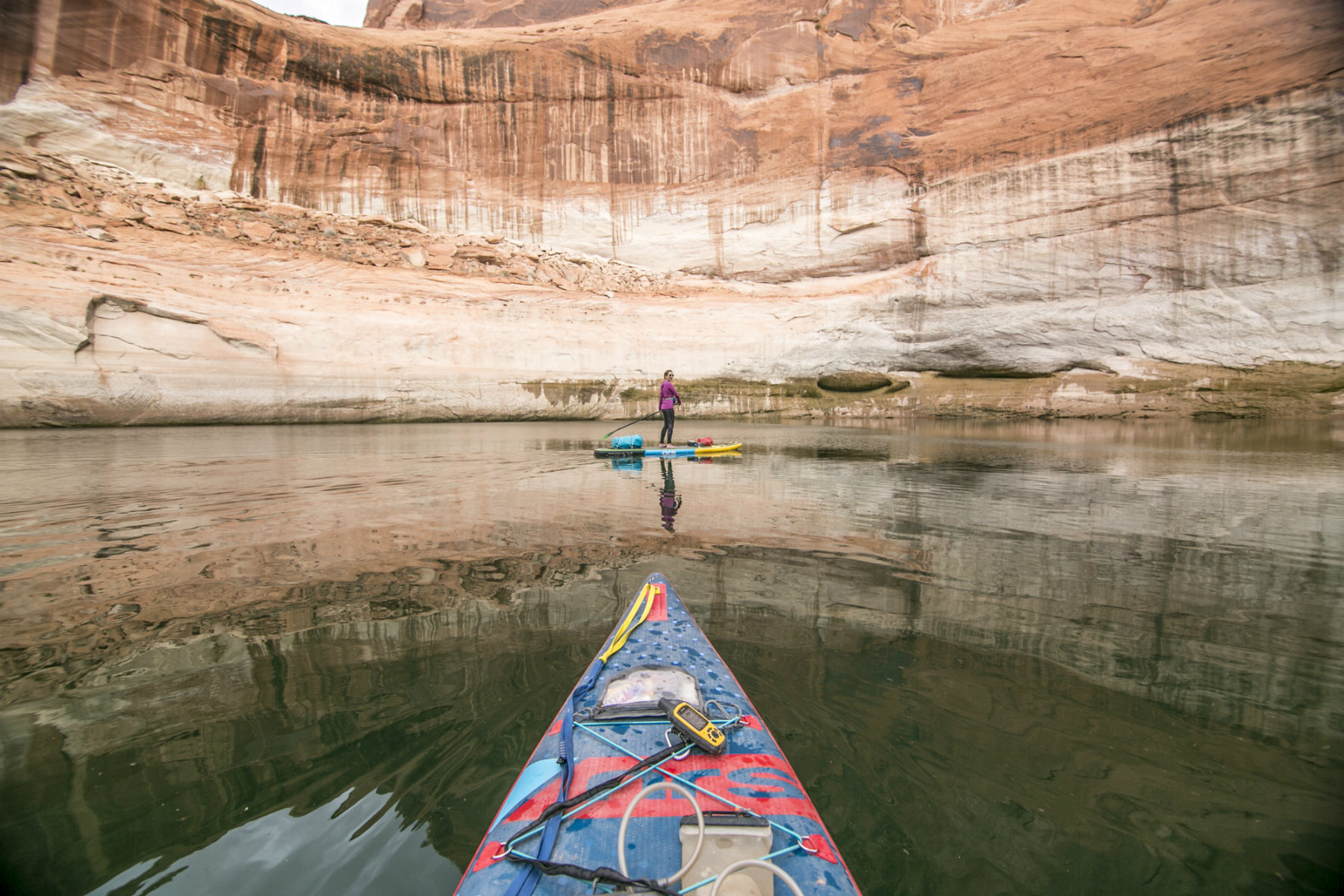 Editor’s Note: Guest contributor Sunny Stroeer is a nomadic adventurer who excels in the high altitude endurance realm but also has a love for water, the unknown, and photography.  Sunny holds multiple speed records in the greater ranges of the world, runs Aurora Women’s Expeditions, and is an award-winning photographer whose images have been published in National Geographic, Outside Magazine, Forbes and many more. All photos by Sunny, unless otherwise noted.