It’s a cold and rainy morning after a full day of packing, phone calls and last-minute emails while we figure out if we have put everything necessary in our vans for the week in Romania—a country unknown to the Balkan River Tour team, but with its stories of thick forests, rich culture and wild rivers, it’s very alluring. Using the strategy of completely filling the van until there isn’t space for one more piece of gear, we embark on the 1,500-kilometer drive from the little village of Zgornja Lipnica, Slovenia to the even smaller village called Vadu Oii in Romania. Vadu Oii lies just upstream from the confluence of Basca Mica and Basca Mare rivers, on the border between Transylvania and Walachia. 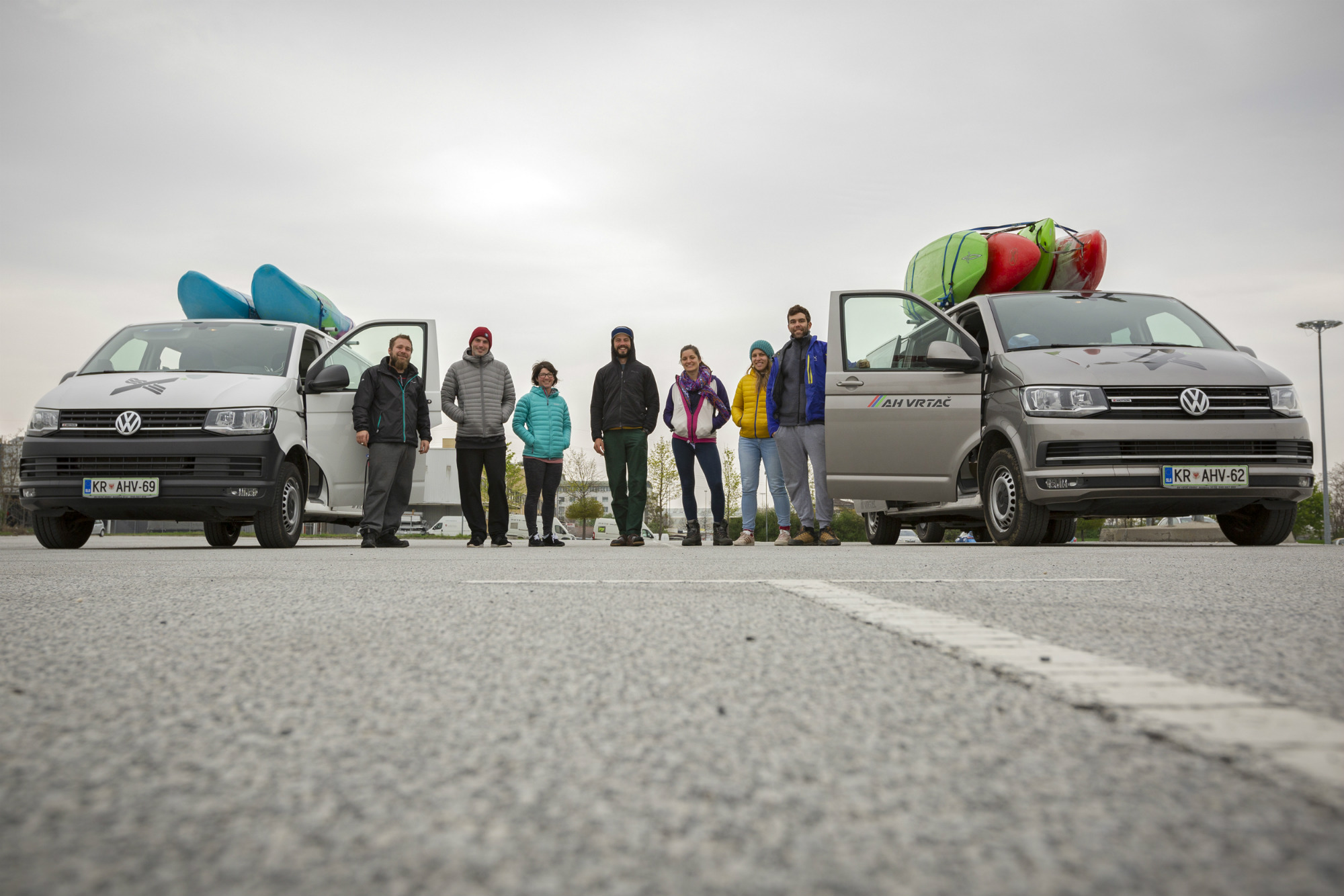 The Balkan River Defence crew is stoked to be on the road and water again, reconnecting with all the tour members after a long winter. Stories, ideas and expectations are running high. The mission for the first third of this year’s tour is to help passionate Romanian river defenders.

The craziest of them, Catalin Campeanu, has been contacting us via emails and Facebook messages since our first tour in 2016. When that didn’t (quite) work, he decided to join us for the third Balkan Rivers Tour to make sure we heard about Romanian’s stunning rivers and the dangers they’re facing. We saw the spark and determination in his eyes at the raging party at Tara Fest. Deep in the canyon of that incredible turquoise Montenegrin river, we gave him a promise: “Catalin, we are coming to your neck of woods next year to do all we can to help you protect your river!”

With a new concept and a completely new country, we didn’t know what to expect. Instead of paddling for 32 days across six countries we decided to split the tour into three sections: one week spent in three different countries—Romania in April, Slovenia in July and Bulgaria in September. Why? So that we could spend more time in one place, be more efficient in supporting the local fight for their rivers and make it easier for others to join—on the river, in the fight and all the celebrations in between. 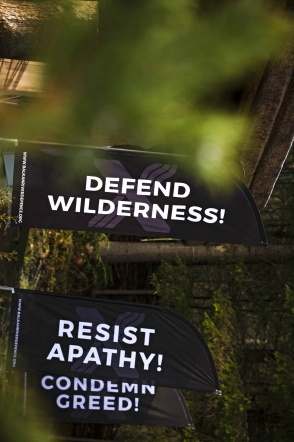 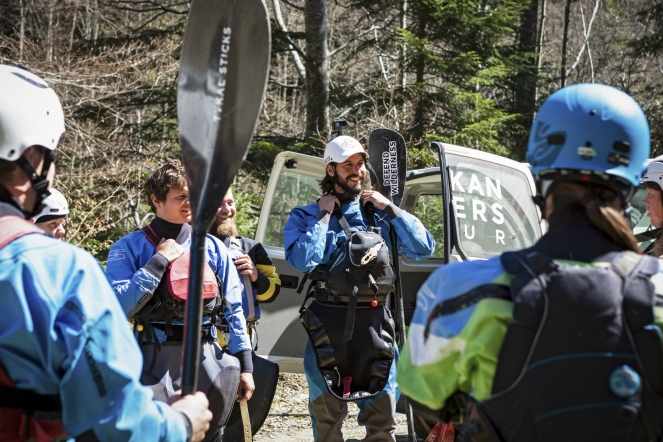 We arrive in the village of Vadu Oii in south eastern Romania late at night after two days on the road. Catalin meets us on the road leading to the New Old Village campsite, a brand-new camp celebrating its grand opening this season, after lying dormant in the heads of three close friends for more than 15 years. Stunned by the location, designs, thoughtful details, and the hospitality of the locals—not to mention the strength of local liquor called tuica—we immediately feel at home. Yet, at the same time, it’s like we’re in a kind of fairy tale. Morning arrives with a packed itinerary of preparation. We spend the day setting the basecamp and scouting the local river. By the evening, we’re ready for people to arrive. BRT 4 would officially kick off in the morning. 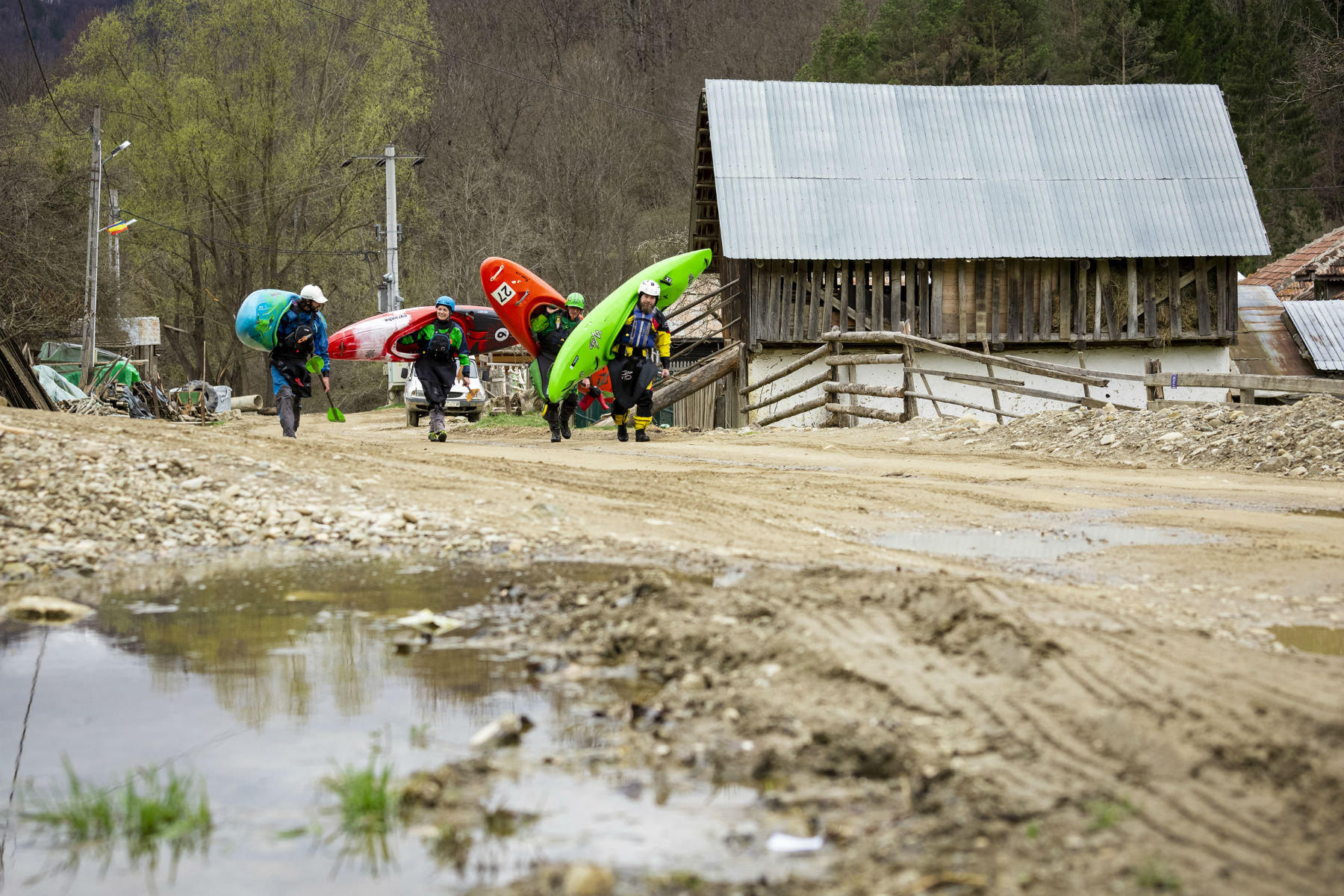 The Basca Mica, Basca Mare, Basca Rozilei, Buzau and Jiu are all rivers that you have to experience in a kayak. Little Basca Mica (Little Basca) surprised us all with its 25 kilometers of continuous slides, boulder gardens and drops. And the takeout brought us back to our basecamp. Its bigger sister, Basca Mare (Big Basca) was even a step better, with a boulder-packed, class IV middle canyon and a super fun class III-IV lower section; it’s a river you can paddle over and over again. And we did, three times! 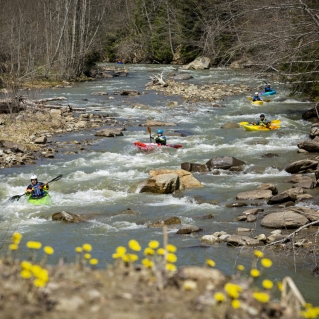 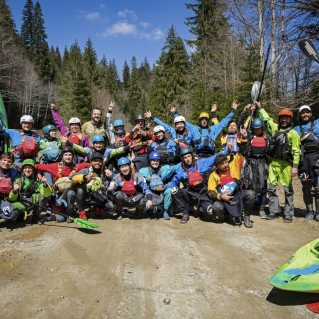 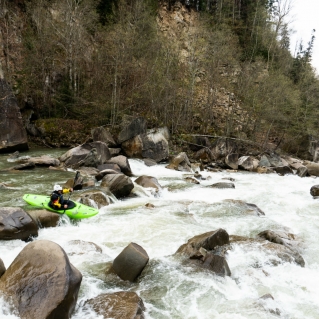 After all that time on the water, we decided to explore the logging roads adjacent to the river. After two bumpy hours, a dam construction site forced us to turn around, but not before we stepped out of our vehicles and let the reality sink in. Seeing the destruction made by the construction of this controversial dam, we could instantly understand why Catalin and his friends have been fighting for this river for the last five years.

The dam is in the midst of a Natura 2000 protected area called Penteleu and is currently on hold due to the collapse of one of the material transport tunnels. If this illegal project is completed a tall dam will block the river completely, flooding the side valley of the three major tributaries and diverting the entire flow of water downstream of the dam into a 20-kilometer long tunnel that would provide the poorly designed Siriu reservoir with more water. In short, the Basca Mare will only be a distant memory.

Our protest there was small and symbolic. But every person in attendance witnessed the potential threat deep in the Romanian forest. Each kayaker and local present left with a determined look on his or her face. A look that said, we will do everything possible to help stop this unnecessary massacre. 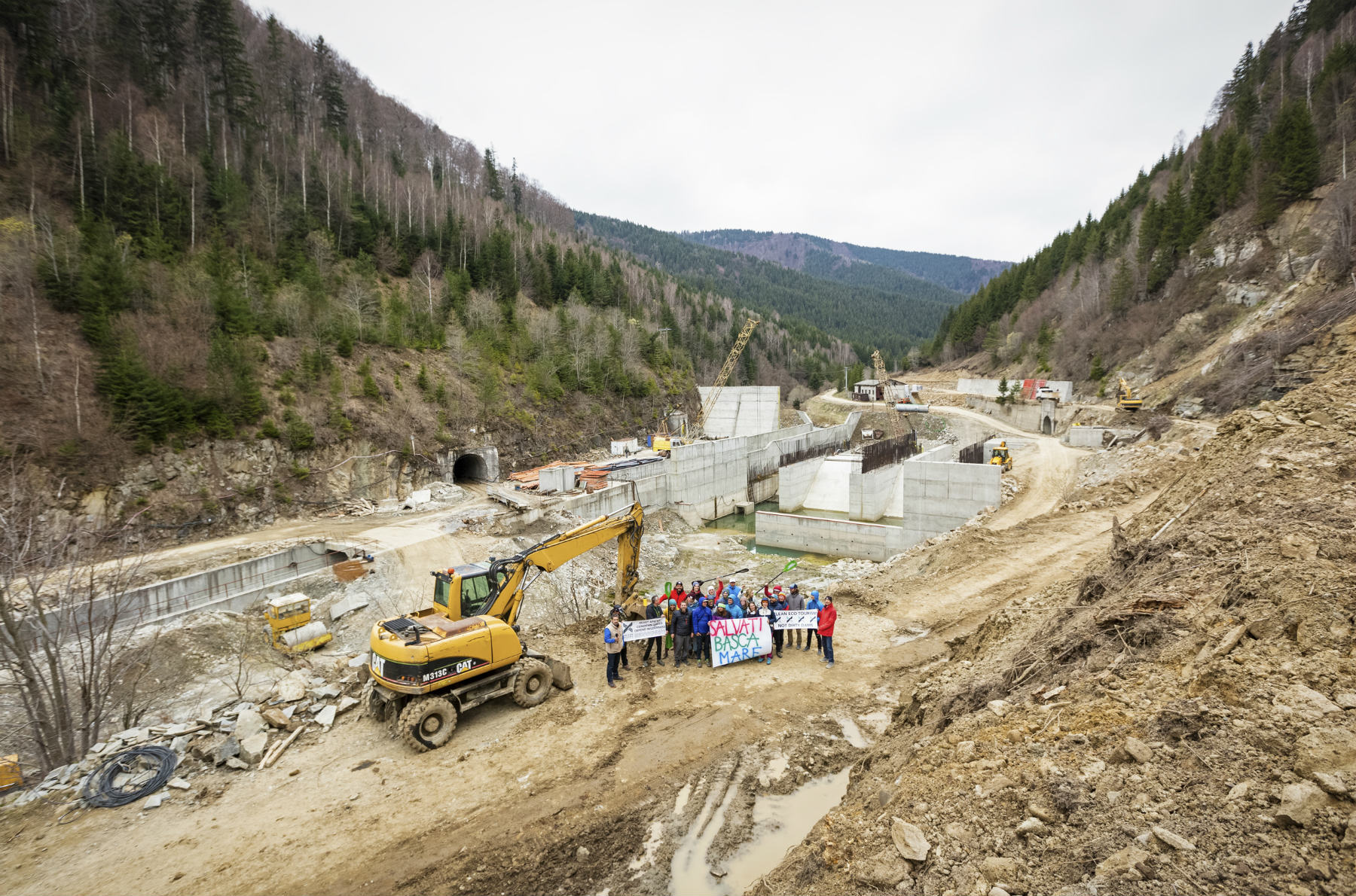 We barely tasted the Basca Rozliei, a river born from the confluence of the Basca Mica and Basca Mare, but scouting from the road we could recognize the potential for some super fun runs farther downstream, especially in higher flows. The main river of the region is the Buzau and the rafting section is a cool class III. Flowing just downstream of the Siriu Hydropower Plant, the put-in lies between plum orchards and the town of Nehoiu. But to paddle it you have to be lucky to catch the outflow from the turbines since the dam authorities are reluctant to provide information on dam releases.

At its roots, Balkan Rivers Tour is a group of passionate kayakers, but we did more than just kayak in Romania. Two mayors sat down with our team to discuss pending dam plans and how sustainable tourism can be a more economically viable alternative. We organized a day of action and workshops with kids at the local Gura Teghii Elementary School. Kayakers turned into fly-fisherman on the Basca Mica River with the help of local fisherman and rod designer George Minculete. Our time in the village of Nehoiu concluded with a river clean-up on Buzau, followed by a projection of The Undamaged and a real Balkan Party that lasted into the early morning hours. 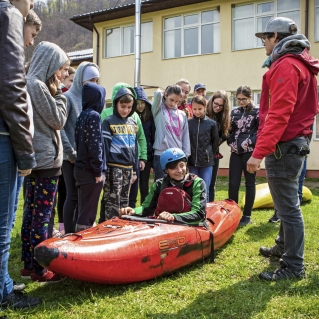 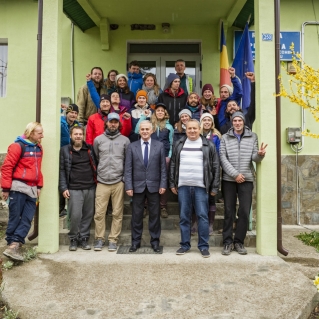 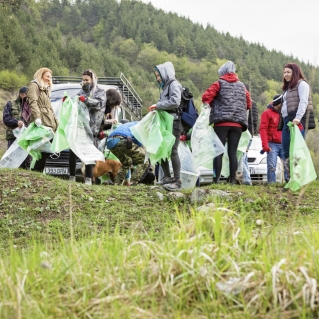 The following morning, we packed the BRT4 Romania basecamp and sat in the vans for a six-hour drive to a very special river, one with a powerful success story. Local activists have been fighting for the Jiu River and working hard to stop the illegal dam construction happening inside a National Park for years. The group’s dedication and fearlessness led to a success and just in the nick of time. The Supreme Court admitted that the company Hidroelectrica—run by the Romanian government—failed to follow the necessary procedures and laws. As a result, they forced the dam construction to cease, even though it was 95% complete.

This concrete monster now stands with opened gates allowing the river to run through, feeding the awesome class III rapids and offering an opportunity to expand eco-tourism along its banks. This victory story is one that motivates us in the face of so many rivers under threat. 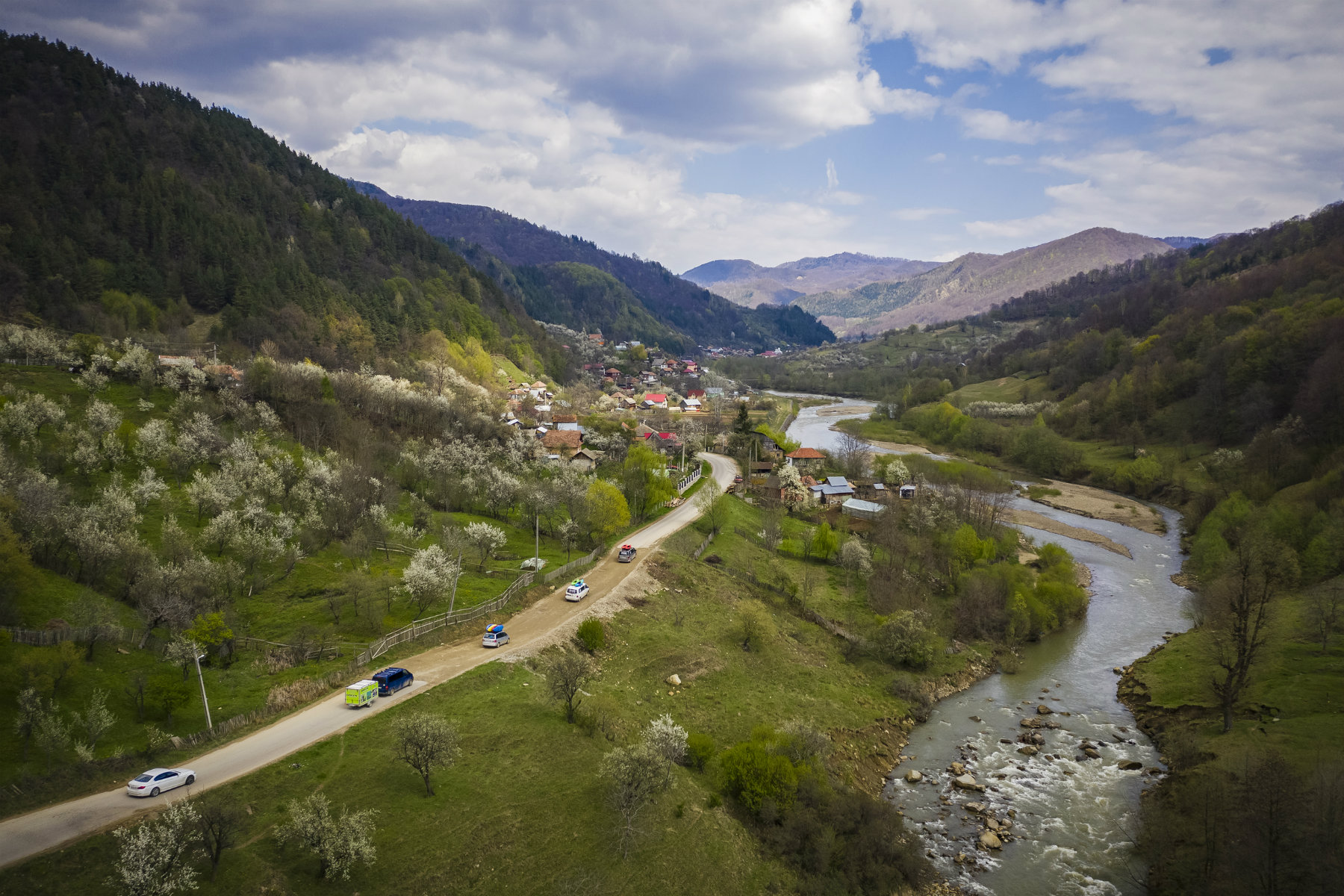 On the next stop, the crew returns to their home river—the Soča River—in Slovenia and invite all to join from July 7-13th for paddling, protests, a mini film festival, concerts, workshops and discussion sessions and of course a party or two. Defending wild rivers is a wild good time!

Editor’s Note: Story by Rok Rozman + Carmen Kuntz; Photos by Katja Pokorn + Mitja Legat. For more about past BRTs, read about the Balkan Rivers Tour 3, where the team paddled 23 rivers in the Balkan Peninsula; Balkan Rivers Tour 2 was a source-to-sea paddle on the Soča river. Follow along on the BRT 4 journey with Week 2 in Slovenia.