The deep-throated groans of howler monkeys echo off the steep river banks. Gusts of wind send pink and white flowers floating to rest on the water. Small fruits plunk below the overhanging trees. The machaca wait below, feeding off the buffet line delivered by each new blast of air funneled down the river corridor. Machaca are the herbivore cousins of the piranha. Rather than razor-sharp teeth made for cutting flesh, they have a full set of human-like teeth built to crush nuts and fruits.

Shale Dog is tied to the raft frame on a short leash, forcing her to remain on the floor. She doesn’t understand the new restraint, especially on such a placid stretch of river. On our home waters in the western US, she has the freedom to bounce around the raft and surf the tubes. But the owners of the Costa Rican farm where we are camped have warned about a crocodile. They lost two dogs this year and I wasn’t taking any chances with my girl.

I tie on a pink foam hopper because I’m fresh out of flower and fruit patterns. The machaca are largely herbivores and I’m banking on finding one curious enough to taste a piece of foam proven on Montana’s trout. I hold the oars mid-river, waiting on the next gust of wind. It comes in a flurry and the big flowered tree begins shedding, its petals floating elegantly to settle on the water. I grip the oars and steady the position until the wind settles enough to grab the rod and make a cast.

I huck the hopper at a group of feeding fish.

One pokes it, I twitch. It pokes again, I twitch…then wham! A little machaca attacks the hopper, more like a predator than an herbivore, and fights like crazy, doubling over a 6-weight fly rod for a minute before coming to the boat. Another hour of fishing and a few more machaca on the dry. Tossing a ball of fruit would likely produce better results. 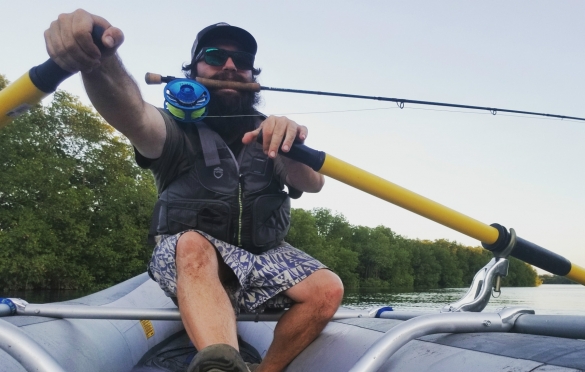 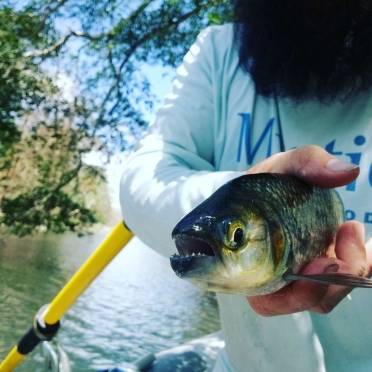 Not far from the takeout, I cast a big streamer against a submerged log. I know very little about the species here but a streamer is never a bad idea. After seeing the machaca’s teeth, I considered switching to a steel leader.

As I pull in the fly to fix a new leader, something slowly begins rising off the bottom of the deep pool. It looks like a dead log casually ascending. A few seconds later and a profile takes shape through the tea-colored water. A large crocodile is looking directly at Shale who is leaning her head over the tube, unaware of the predator beneath her. It accelerates toward us and I swat its head with my 6-weight. The crocodile makes a big splash, tail-slaps the water and disappears below the boat, leaving a big wake. In hindsight, the oar would have made a better deterrent.

I’m on a river in northwest Costa Rica, just south of the Nicaragua border. After three months on the road in my 1994 Safari van, this is the first time my Star Bug has really seen the water. It made a short and futile appearance in Nicaragua on a coastal estuary. Otherwise, it’s been stashed under the van bed, working through a slew of military checkpoints and border crossings in Central America with the overarching goal of reaching Patagonia for a full five months of a southern hemi summer.

My time in Mexico was largely spent on the Baja Peninsula, fishing the Sea of Cortez where the raft had little application. After some last minute research on mainland Mexico, I ran across a potential float in the southern Chiapas region. The large, mountainous area is water-rich and has several amazing float opportunities. It’s also logistically challenging and launching without a guide is difficult.

I just missed a launch date with Rocky Contos who, as far as I know, is the only person organizing multi-day trips in Chiapas with local guides capable of navigating permissions from local communities, descendants of mayans who are still making their living in remote river canyons. Driving past the Chiapas rivers without floating still stings a little but I continued along to the next border to make my shipping deadline in Panama.

The Guatemala border agent checked the raft and fired off a series of questions before deciding a non-motorized boat required no extra permissions. I blasted through 90 miles of broken roads and traffic to park on Lake Atitlan hoping to row around and fish for bass. My “lakefront” campsite ended up having a quarter mile of stairs to reach the lake, leaving me to fish from shore and off the docks for small bass in the shadow of a beautiful volcano.

I made quick work of western Honduras, driving straight through the mountainous country on the western side. The majority of river systems I crossed were very low or without flows during peak dry season. After a night in triple-digit heat at the southern border, Shale Dog and I pushed into Nicaragua, paying a series of bribes to bypass the failing bureaucracy associated with a brutal dictatorship. The final bribe—a 20-dollar bill—avoided the giant vehicle scanner where they make you unload the entire vehicle before running through a big X-Ray machine. 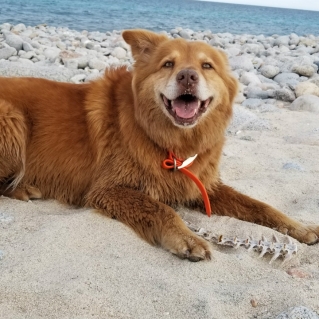 Shale Dog in lounging on a beach in Baja. 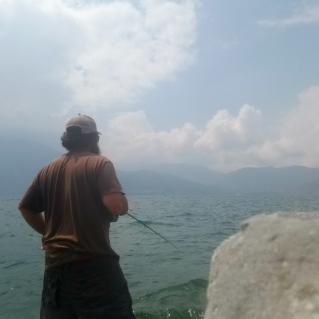 Fishing the banks of Lake Atitlan. 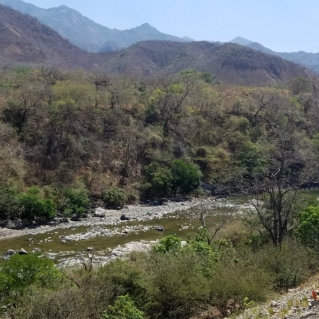 After four hours of sweating through the Nicaraguan border, a country full of smiling locals, some of the kindest people I encountered in all of Central America, greeted us. After fishing the North Coast for a week and studying the maps, I found a series of promising rivers, all tributaries to the massive Lago Cocibolca that essentially divides the country in half. It was finally time to explore new rivers and really dig into the freshwater fishing.

I drove the only road that crossed the series of rivers, dodging potholes deeper than my axles and stopping at several military checkpoints, staffed by young, eager men patrolling the Costa Rica border. Each one searched my van, repeatedly asking if I carried guns and drugs but they really seemed more interested in picking through my gear to check out the fly boxes and the mule deer antlers functioning as a hat rack. I asked about the fishing and they all let me through after a short interrogation. Unfortunately, none responded with any detailed information about the fish.

I crossed the first river and quickly realized the fault in my plan lied in the remoteness of the location. Only a single road crossed each river, leaving no option for a practical launch or takeout. At each bridge, locals gathered to bathe and do laundry. I would stop, looking upriver into a jungle with almost no human traffic and although I was out of options short of a helicopter drop or a multiday, border crossing expedition from the headwaters to the termination points in the lake. At this point, simply knowing the sanctuaries exist is comforting. Few rivers in Central America are largely void of human influence. These are among a precious few that are far removed and unspoiled.

After crossing into Costa Rica and fishing the farm, I pieced together trips down the Corobici and Tonorio Rivers. Shuttles are the biggest challenge and my bicycle wasn’t an option for the longer shuttle routes in the area. The rafting community came through with incredible hospitality, recognizing a river bum desperate for time on the oars. A local outfitter let me camp on their property and tossed my raft on their trailer to follow the commercial trips.

The Tenorio River is a small, mellow class II float with incredible wildlife viewing. We saw crocodiles, monkeys and iguanas sunbathing on the banks. Pacing, though, on the commercial trip schedule limited the fishing time available but the river was stunning and the guides shared their pineapple snacks and local knowledge. 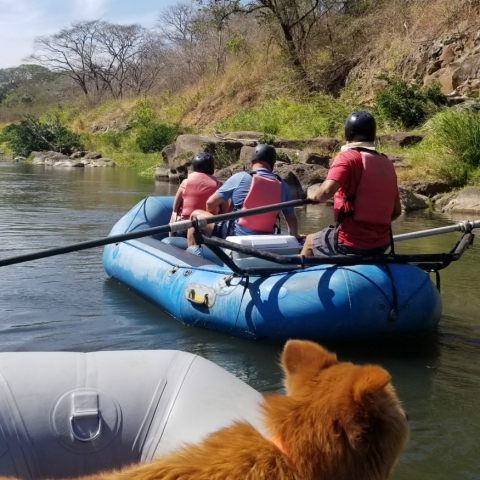 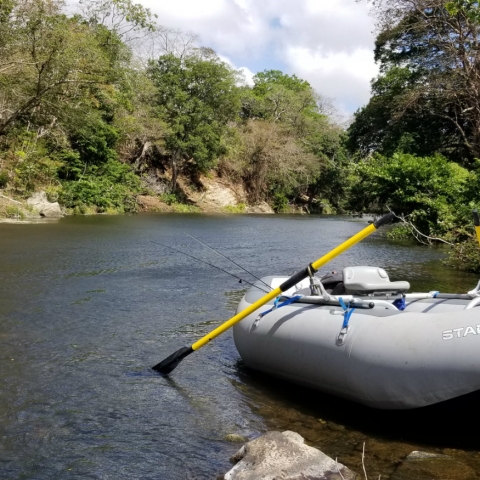 The Corobici was the next stop, offering bigger water and a chance to really feel out the Bug in big eddy lines and shifting currents. The Bug sits high and maneuvers like a cataraft but still has the front rocker to punch against waves. It’s as nimble a raft as I’ve rowed and will be the perfect setup for multi-day runs through the rivers of Patagonia.

In the meantime, I just shipped the van around the Darien Gap, landing in Cartagena, Colombia. That leaves several months to make river runs in Columbia, Ecuador and Peru. September and October will see river time in Northern Argentina and possibly Bolivia, chasing Golden Dorado until the fishing season opens in Patagonia to the south. After battling the heat and dry season in Central America for several months, I’m relieved to have reached South America and ecstatic to have a full year of rivers and mountains ahead on the continent with my van, raft and best four-legged friend.