Areas with class V rapids generally don’t have the type of habitat or the easy access needed for quality spawning grounds for fish. Typically, salmon and trout are abundant where the flow of water opens up from the constricted canyons it cut through the mountains over millennia. These calm stretches are the preferred habitat for fish to be conceived, born and raised. And for whitewater kayakers, these are less-preferred stretches that we generally try to avoid. 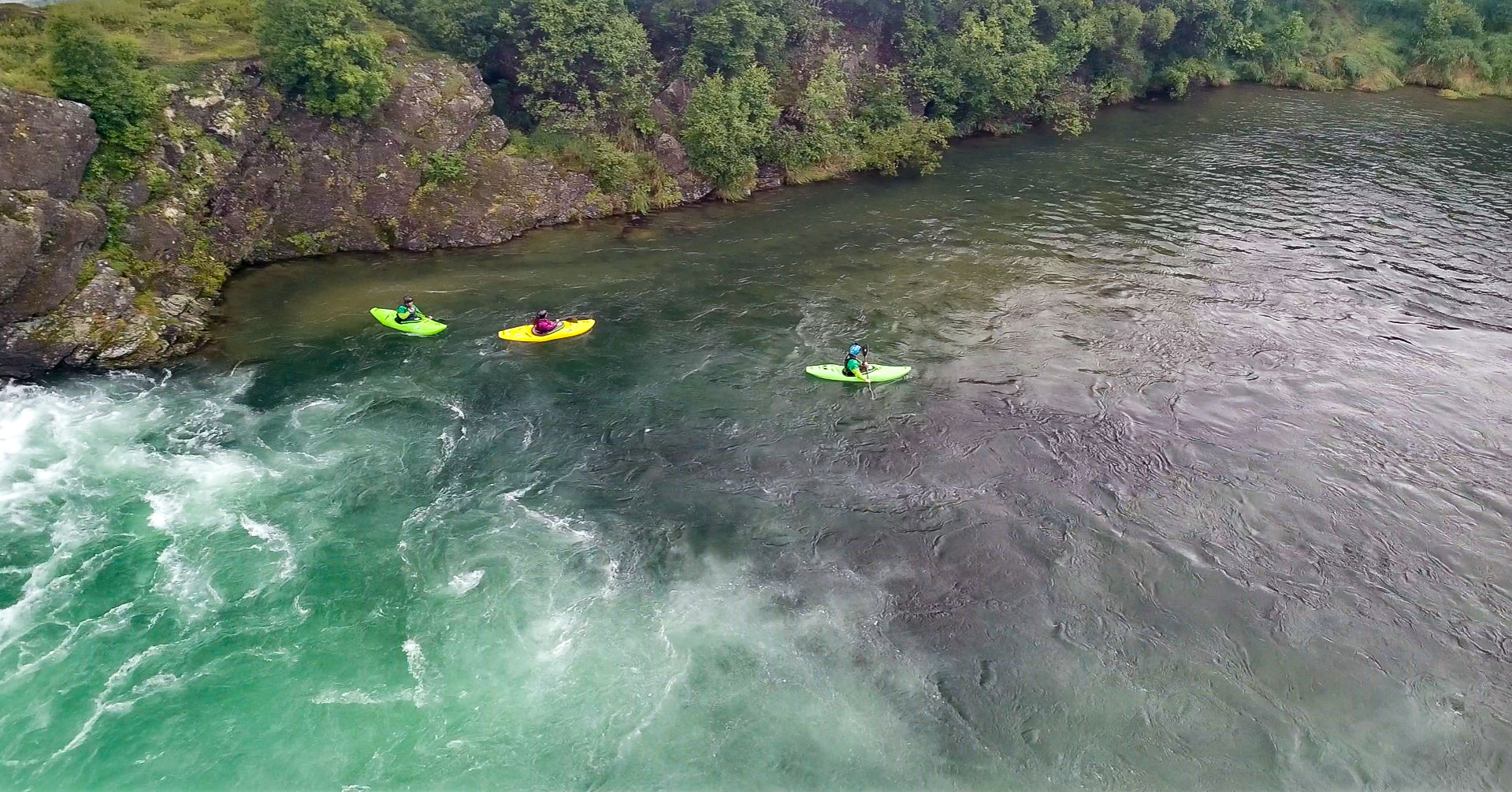 However, Alaskan salmon and trout have no choice. Raging glacial rivers, that don’t let up until they freeze over in winter, guard much of their desired habitat and spawning grounds. Northern salmon have evolved with the mountains and rivers and are born for the task of running Class V, both swimming down it as two-year-old fry and back up through the whitewater come adulthood. That gives a whitewater-kayaker-turned-fisherman—like me—a seldom, but fortunate, chance to chase both obsessions. 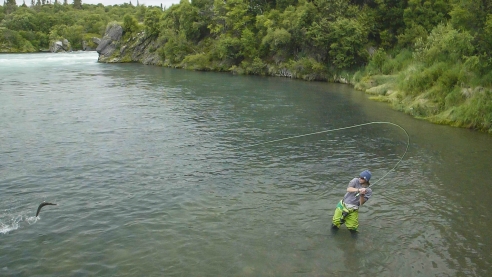 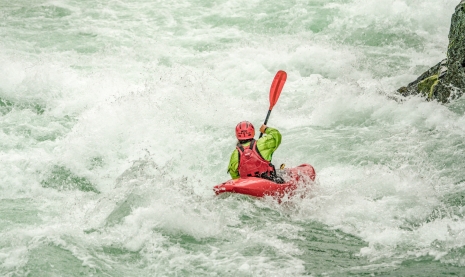 Harvesting my own food has always been a keen focus of mine—from wandering the woods to floating down rivers. Fly fishing helps me fulfill this desire—and gives me another excuse to spend even more time on the river. Plus, it’s a mental and physical challenge that takes a lifetime to learn and offers an understanding of rivers and ecology in a fascinating new way.

Nearly every kayaking trip I’ve done in Alaska or Canada I’ve carried at least one, if not two, fly rods in the back of my boat. Ninety percent of the time I would take them out only to practice casting, and more often than that there wasn’t a hope in the world of catching a fish. 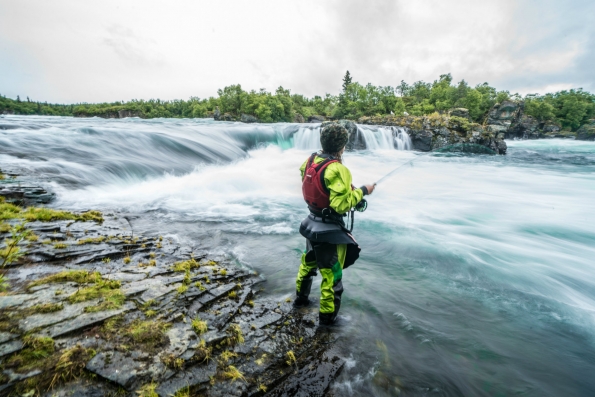 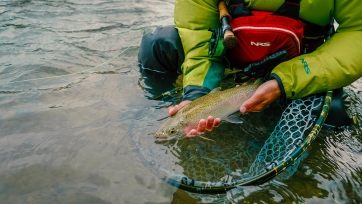 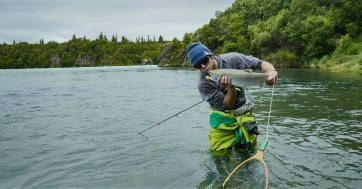 After the better part of five years packing the usually burdensome flies, rod and reel down the river, determination and loads of hope finally paid off. We headed to Alaska’s Bristol Bay region, well known for its abundance of fish but not as known for its quality whitewater runs. I thought the legends I heard growing up in the Columbia River Gorge of “so many fish you could walk across their backs” were only that—legends from pre-industrial times. But in Bristol Bay, where industry has yet to reach and few homo sapiens are to be found, the legend lives on. And the whitewater exists, too. 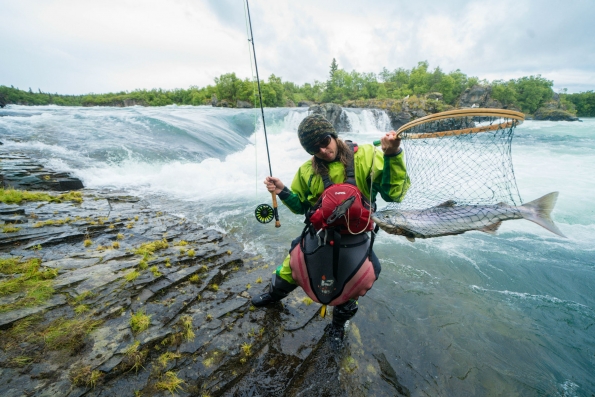 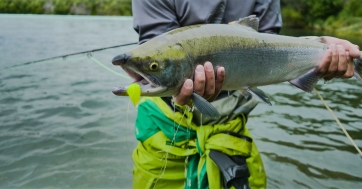 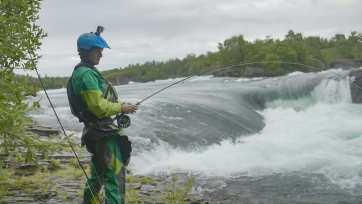 Within a day of arriving, we were surfing dozens of tall, fast green waves before rounding the corner into the first substantial rapid. As we got closer to our first sight of the rapid, our smiles became even wider as the roar of whitewater drowned out every other thought. Dodging holes and catching air off the backs of giant standing waves, we hooted and hollered with each other.

We eddied out to scout our next lines. Mesmerized by geology so uncharacteristic of Alaska, the river split into three main lines all of equal size and difficulty, I didn’t even notice the seemingly fake scene occurring at my feet. Hundreds, if not thousands of salmon were rolling and boiling and bouncing off of each other. Wherever there was water there was also fish. 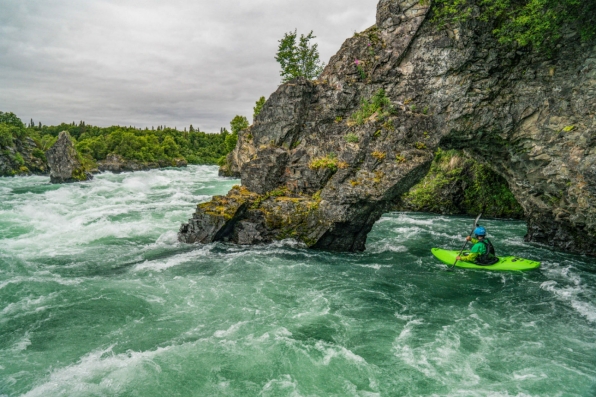 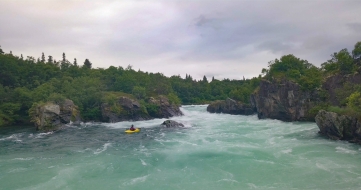 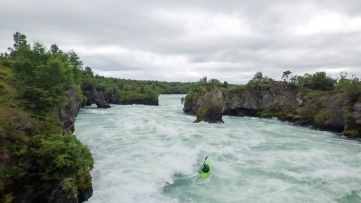 Perhaps more excited about the of fish than the whitewater, Todd, Parker and I all chose different lines, took turns setting safety, then swapped our paddles for fishing rods. Within minutes we hooked into beautiful sockeye salmon, threw egg patterns for oversized Dolly Varden, and caught rainbow trout the size of salmon.

After our wrists were sore from fighting fish and the brown bear downstream began to slowly work his way into our comfort zone, we added the extra twenty pounds of fish to our boats and let the warm current (for Alaska standards) take us downstream. Several more high-quality class IV-V rapids and numerous surf waves capped off the day. 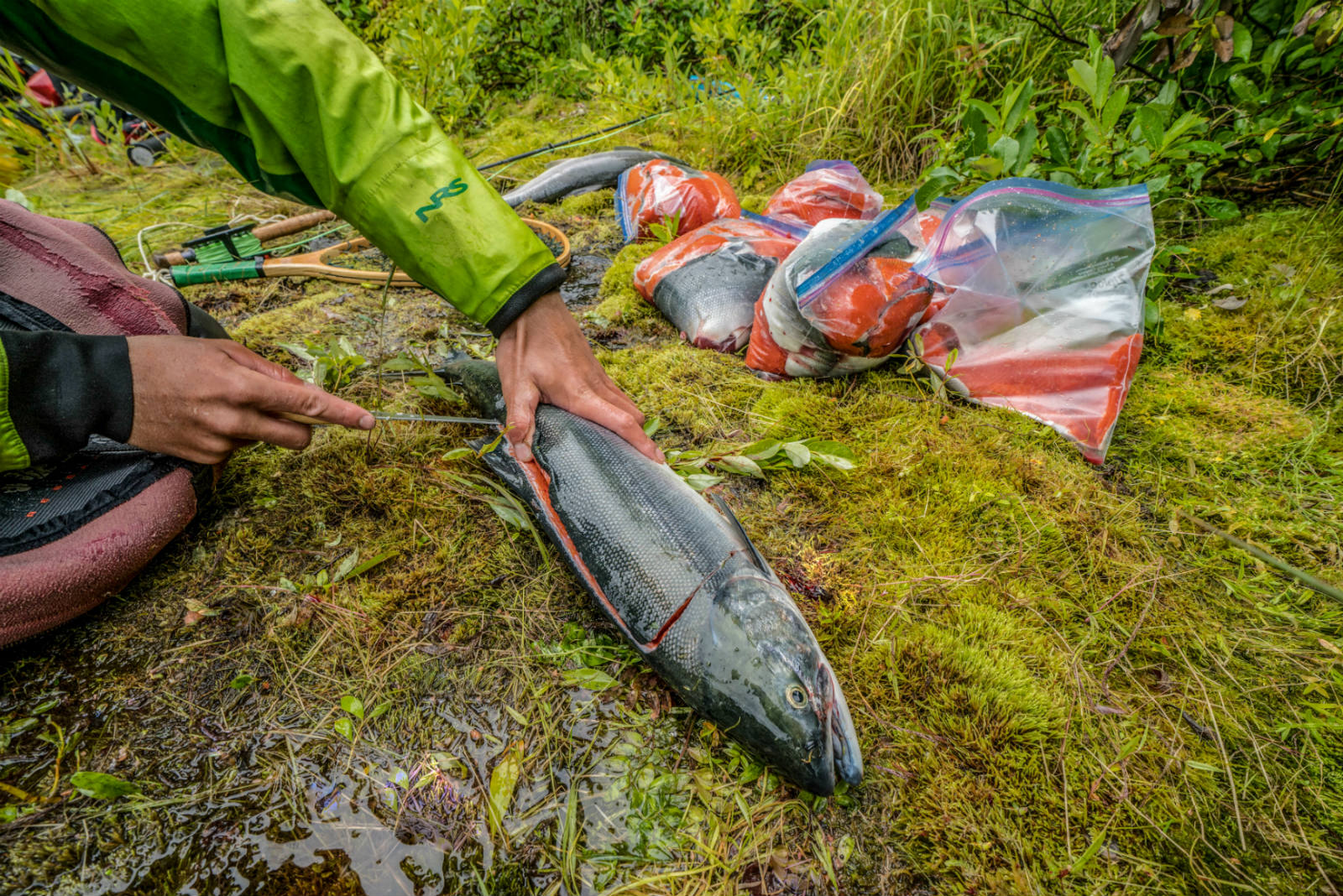 It’s a logistical challenge to get anywhere in Bristol Bay, but the abundance of bush planes and eager, experienced pilots can make just about any trip possible. You can basically pick a river and be certain there will be fish. Finding whitewater might be a little trickier, but there’s certainly much more to explore in this magical land.

Editor’s Note: Be sure to watch Brendan’s film Class V Fly Fishing the third episode in the Flowstate series.