You know what’s easier than taking your kids on the river? Pretty much anything else you can do with them.

It’s easier to stay at home and let them watch a movie because it’s the weekend. Or simply turn the hose on in the backyard. It’s even easier to stay in the basement folding laundry while they create a new and impressive obstacle course which only involves knocking over a few breakable items including their sister. And none of those things are bad.

But you know what’s better than taking your kids to the river? Nothing. 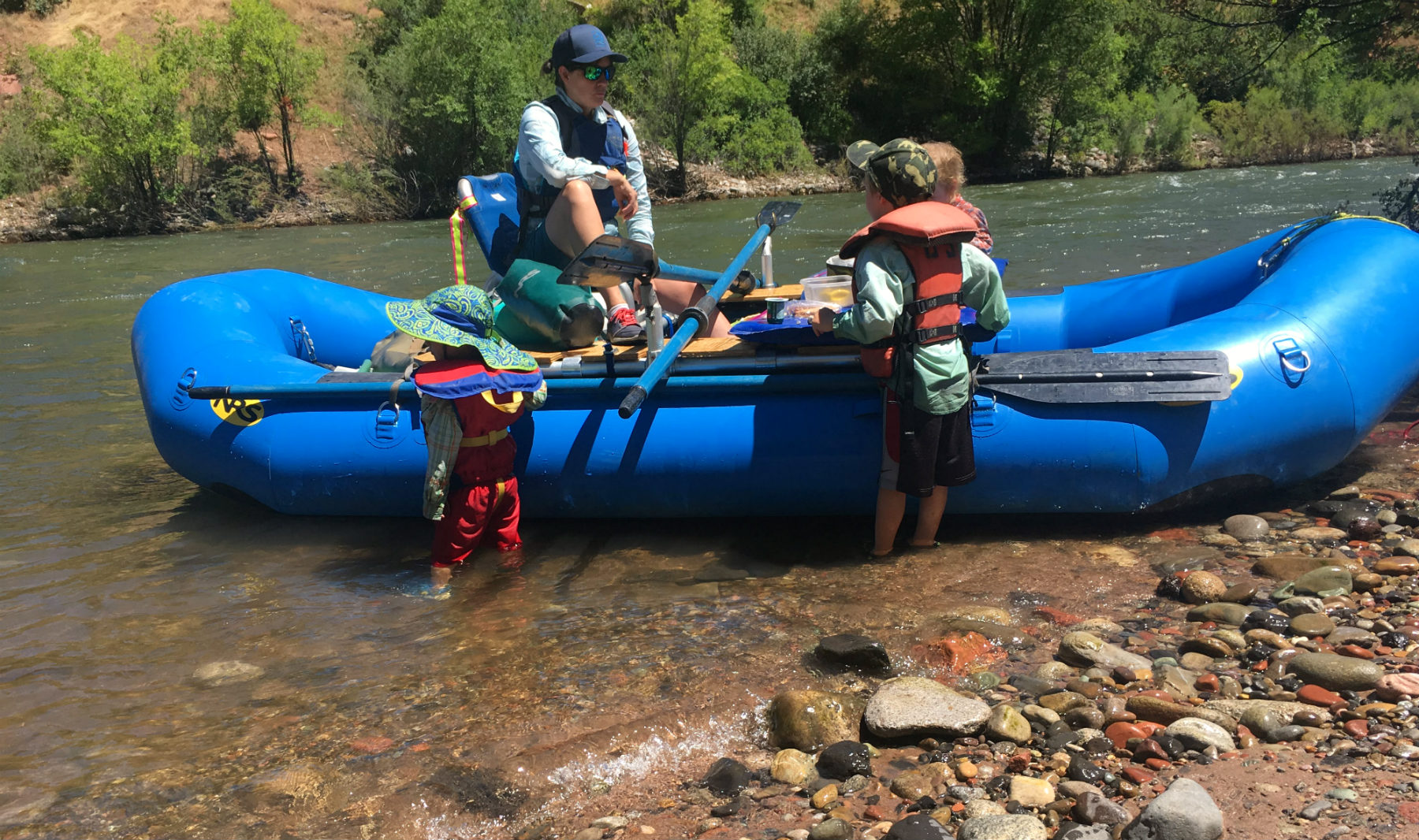 Our oldest is only six, but I can already hear the siren call of soccer games, sleepovers, and last minute science projects. There are invitations for parties and play dates and t-ball leagues nearly every weekend. I know that I’m racing against the clock to stockpile memories of joy and time together in the outdoors while they’re small enough to just want to be with us, pretty much wherever we want to be.

So my husband and I have decided to prioritize the people we love in the places we love above all else. The world will always be there, with a million distractions, expenses and stress. Our children will only be bouncing up and down in the boat screaming ‘RAPIDS’ in a toddler voice for a few more years. 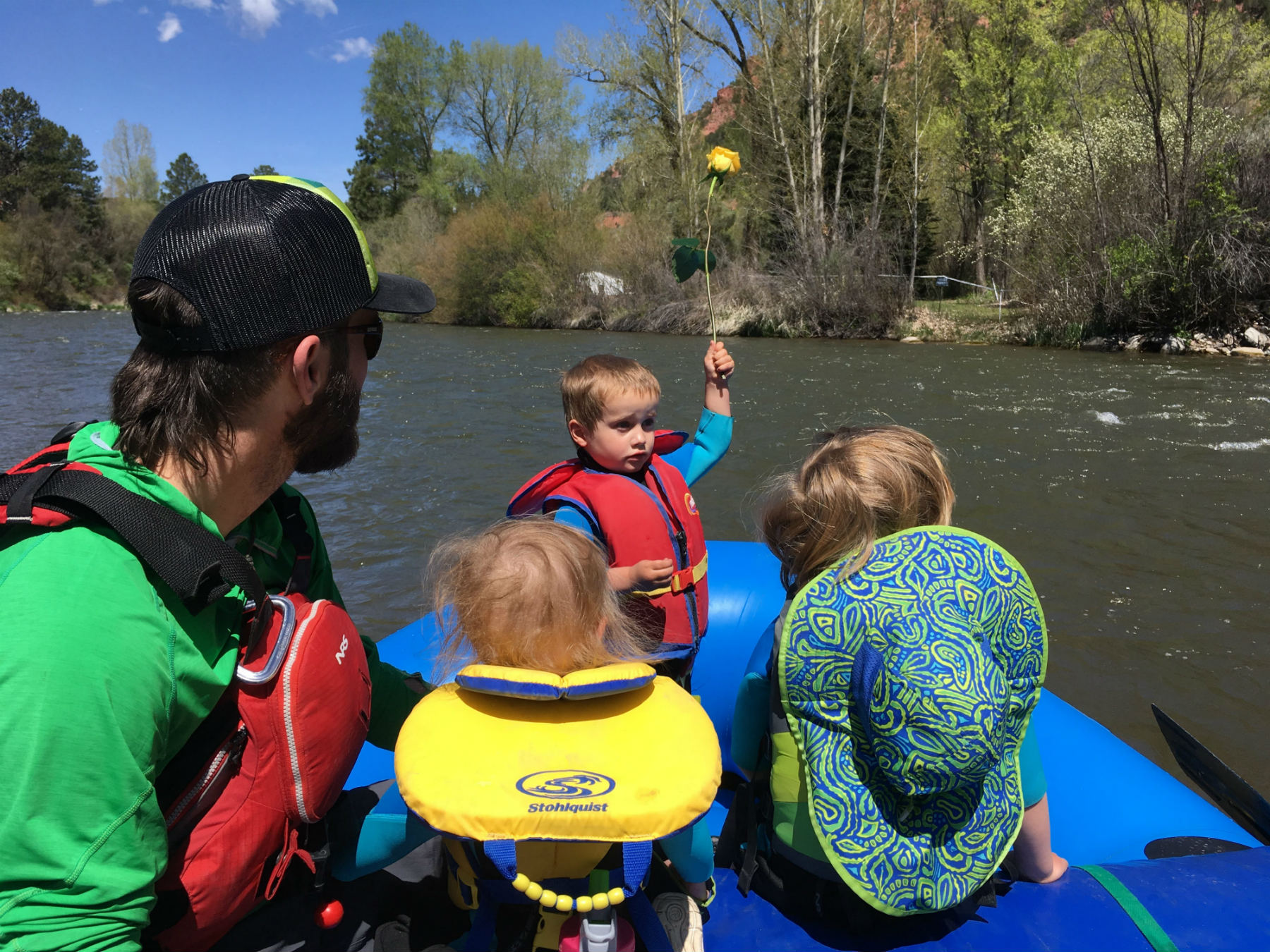 If you’ve read any of my stories this summer and thought, ‘I could never do that,’ maybe you could. Take a pass on the logistical Everest of packing for a multi-day, and the insurmountable wall of ‘must-have’ gear. Find a mellow float, toss a Walmart cooler in the second-hand paddle boat and cinch down the kids’ PFDs.

Day floating is a great way to start, and once you’re on the water it all makes sense.

Now, there is a reason we are calling this series Family Rafting 101 and not Family Rafting 402. I am not an expert in boating with kids and am constantly learning from parents who have been doing it way better for way longer. It’s like I’m finishing up a bachelors, maybe, for a good entry-level job, still staring at my professors in awe. Imposter syndrome is my daily acquaintance. 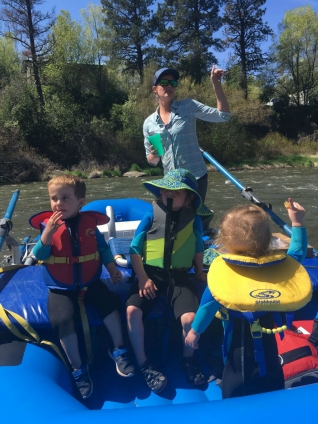 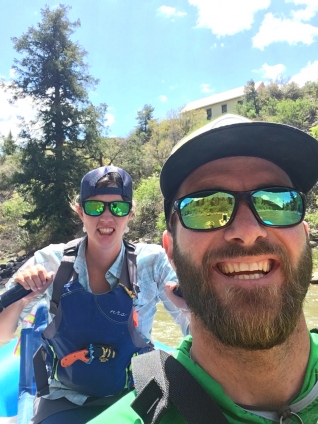 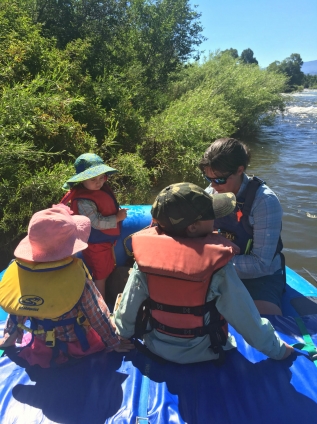 On Mother’s Day this year, I told my husband to forget roses and brunch. All he had to do was help us get the family on the river and let me row the whole trip. He’s a wise man and happily obliged. As a bonus, I even got to run shuttle. This is only a bonus if you’re a parent of young children and 45 minutes of quiet alone time with your choice of radio station, and the grown-up conversation on the way back is the most you’ll get all week.

We were taking advantage of some sunny skies and boating a local stretch of the Roaring Fork River, meeting up with some other rafters who also looked forward to an easy day on the water. While waiting to see who actually showed up for the trip, I pre-mixed a light mimosa and we all enjoyed observing the local population of hookum enlippus try to get on the water as slowly as humanly possible. 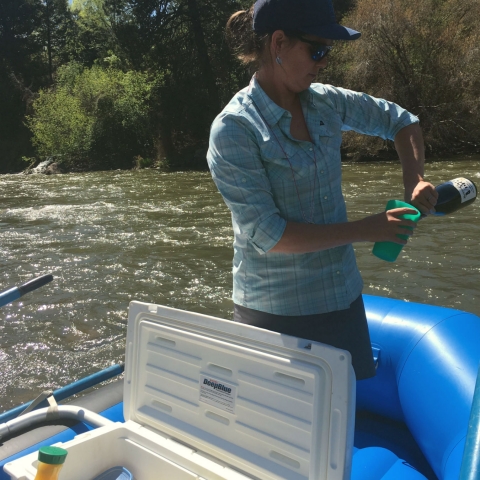 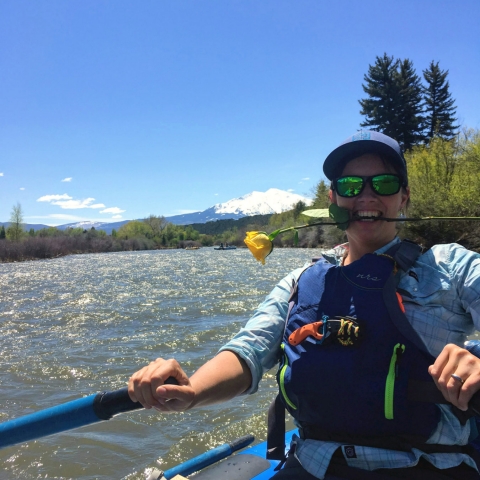 All her Mother’s Day wishes + a rose!

On this particular float, we did learn a few things. For example, we learned not to bring more than two rubber ducks on strings to float behind the boat. We learned that although you may launch surrounded by excellent people on other boats, until your kids are of a certain age, you won’t be having a real conversation with anyone and might as well just go by yourself to save on shuttle wait-time.

We figured out that two hours on the boat is our current limit, after which, the kids need to go ashore and kick sand around for a while.

Floating down the river, we enjoyed spotting wildlife and heron rookeries. We laughed about how much poop there was on the branches below the nest. Then we just laughed about the word poop for another five minutes, and then we gave all the kids apples to make them shut up and stop saying poop. We learned that an apple is both a healthy snack and about ten minutes of entertainment. 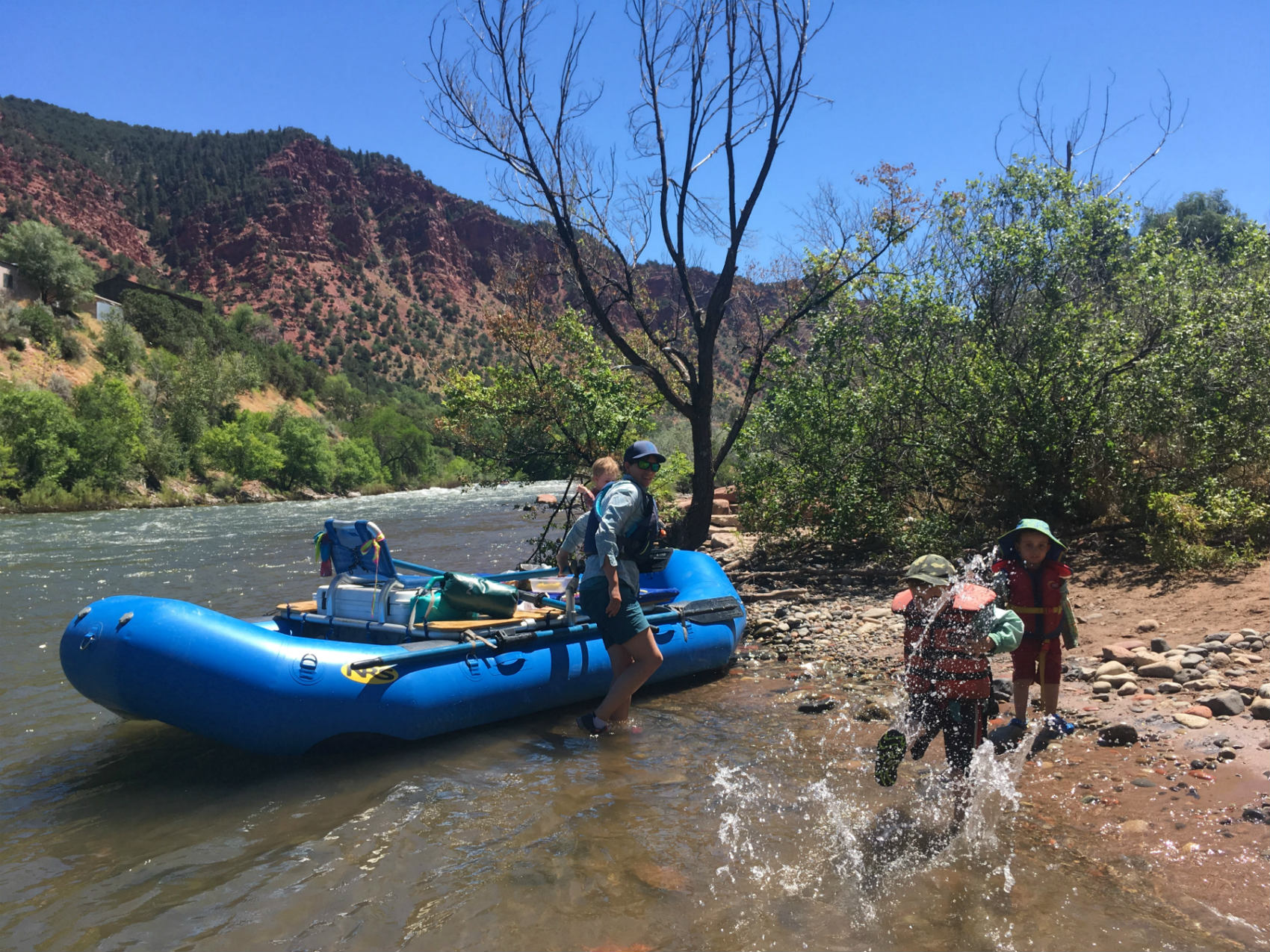 My youngest girl who has some light sensory issues is challenged initially by being in the raft. She is off-balance from the movement of the water and dislikes the texture of her lifejacket at first. But with snuggles and snacks, she always relaxes. At least until a cold splash of water hits her in the face and we start all over again. Yet without that time rafting, where she doesn’t really have an escape besides my lap, she learns to cope in surprising ways.

Malcolm, the Dude, always sets himself up in the front of the boat, hanging on to the bow line, peering ahead at the water. It’s one of the only places where that poor middle child gets to be first. Next year, we’ll teach him how to ride the bull. 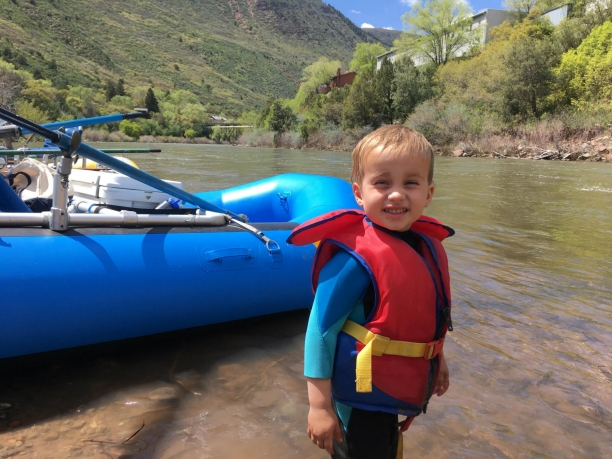 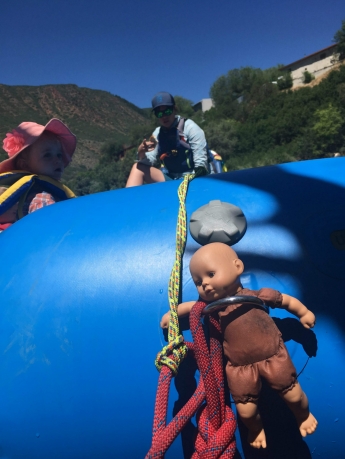 Hunter loves to initiate water fights, but at six, he’s only just starting to enjoy the return fire, sometimes still taking it a little too personally. In another big milestone moment, he has learned to embrace the cold water and let the buoyancy of his life jacket keep him afloat.

After the class II+ section of rapids called Cemetery, which runs right behind our house, Hunter looked at us and said, “That was ‘meh.’ I wasn’t scared.” Guess we’ll be throwing him in next time.

Another important thing we learned was to plan ahead for the shuttle wait time for the kids. We needed some kind of special snack or dedicated game for that period of time. As the kids get older, I doubt this will be as much of an issue, especially when they can start swimming more on their own. As it was, a few Jolly Ranchers saved the day. 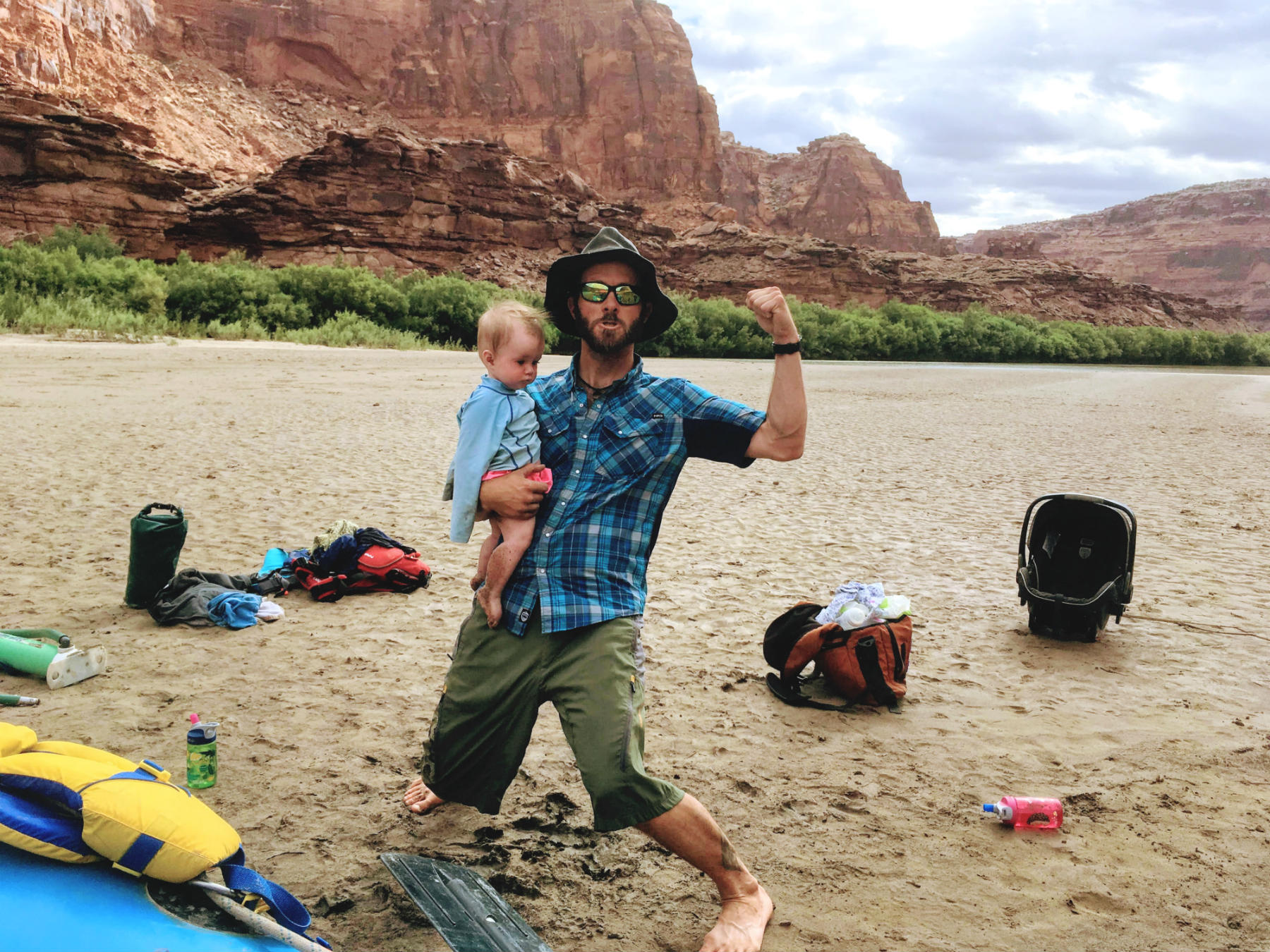 There is the saying that ‘You make time for what’s important,’ and that is the case 100% of the time. So when we take a day float, even a half-day float, we know we will come home to unwashed dishes and crumpled laundry. We know we won’t have a modern kitchen any time in the next decade, and that our yard will likely remain a cross between accidental xeriscaping and a grossly neglected jungle.

I also figured out that it is always pointless to tally up hours to figure out if a trip is ‘worth it.’ Did we spend more time on the water than we did packing, driving shuttle, and de-rigging? The answer is sometimes—often—no. But those hours of work involved don’t change the fact that for three hours, we had our kids all to ourselves.

Editor’s Note: Lindsay’s Family Rafting series offers tips on risk management, packing and much more. And you can read more about her boating family on the Down River Digest.