It was mid-November in Central Colorado. There had already been one big snowfall of the season—15 inches back in October—and though the remnants had long melted, the ever-shrinking amount of daylight reminded me that the coldest, darkest part of the year had arrived. In most mountain towns at this time of year, people are dusting off their skis, heating wax, and sharpening edges while awaiting the spinning of the lifts. The air is cold enough at night for snowmaking and mountain culture shifts its mindset from boating, biking, and running, to slashing and carving.

Not us though. At least, not yet. There was still water to float. 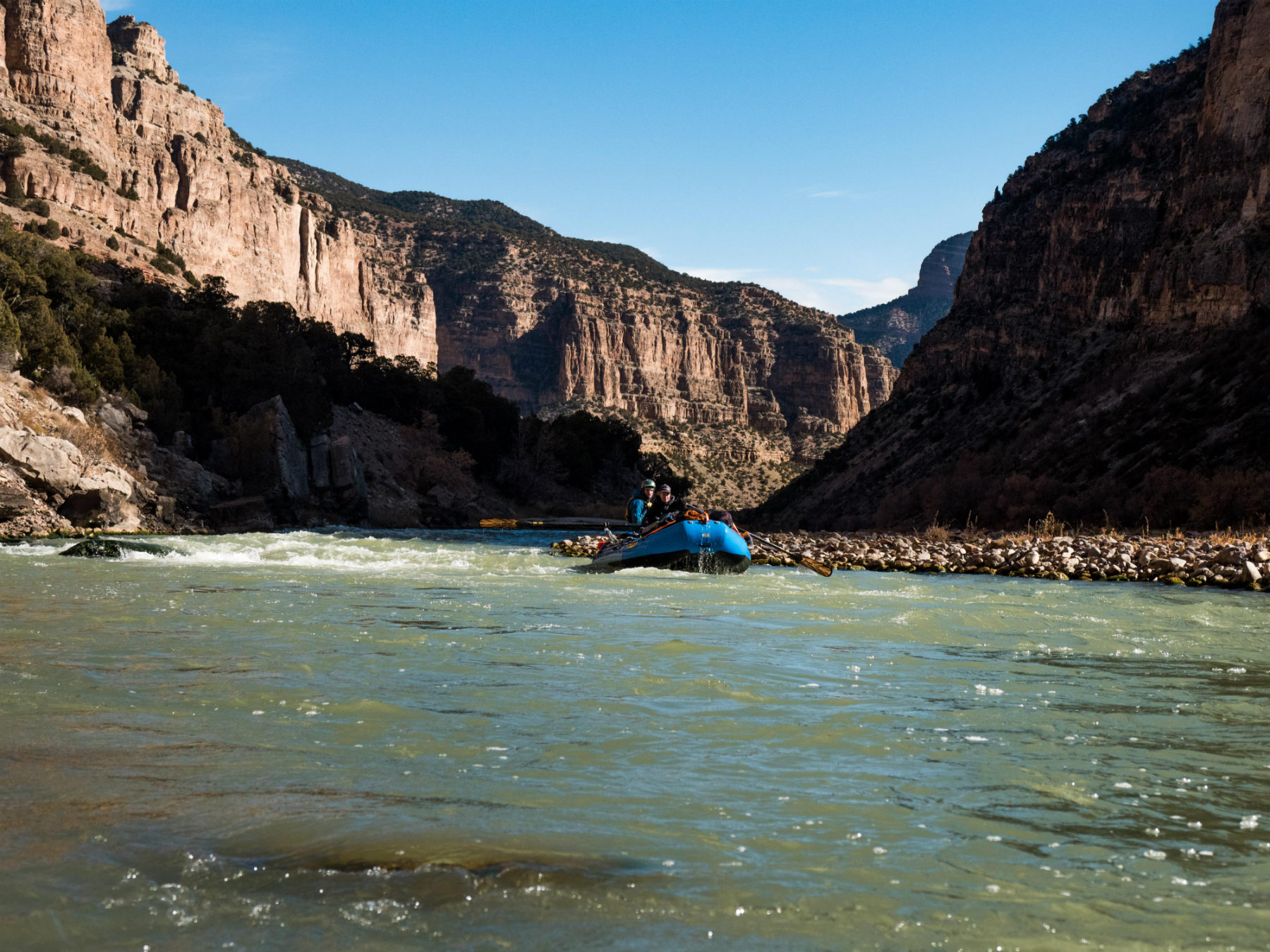 A weird stream of thoughts goes through your head when you receive this text message from a friend: “Pulled a low-use permit. November 4th, Gates of Lodore. You in?” The initial reaction is some emphatic response of stoke followed by some expletive-laden statement upon realizing the probable temperature in 3,000+ foot canyons in northern Colorado in November. But slowly, as those thoughts of cold begin to thaw, the stoke crawls its way back into position.

During the shoulder seasons, as we call them, most ski-bums and river rats take off to warmer places or to visit family members. We lose ourselves in those last bits of travel before work ramps up and snow blocks the high mountain passes. And normally, I would be doing the same thing. But instead, I found myself driving north on Highway 13, chasing the small traces of light down the parched, windy ranges of Northern Colorado. 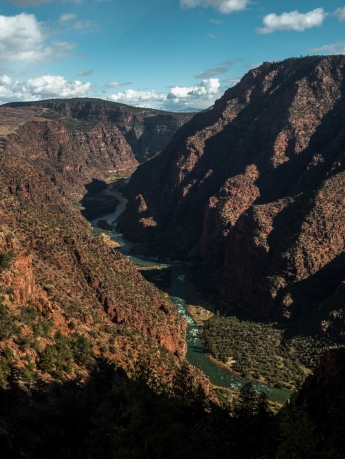 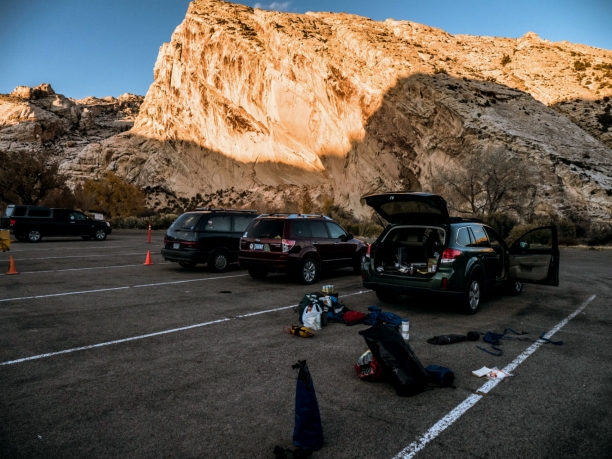 It seems that no matter how much planning I do for a trip, I’m always in a frenzy. Panicked to prepare gear for every situation I might encounter, yet trying hard to keep the gear as minimal as possible. My competing packing habits occupy the final moments of time leading up to a trip like this, and while I long for the trip to come, I can’t help but feel conflicted as I wish I had more time to prepare.

It’s a strange contradiction, wanting time to slow and speed up at the same time—kind of like the idea of paddling in late fall. You’re excited for the new season that approaches, but desperately holding onto the season that’s almost over. A swelling of bittersweet feelings—it’s important to take a deep breath and enjoy the last touches of light that grace the day. And then, here we were, prepared and ready to paddle through the Gates of Lodore, our home for the next five days. 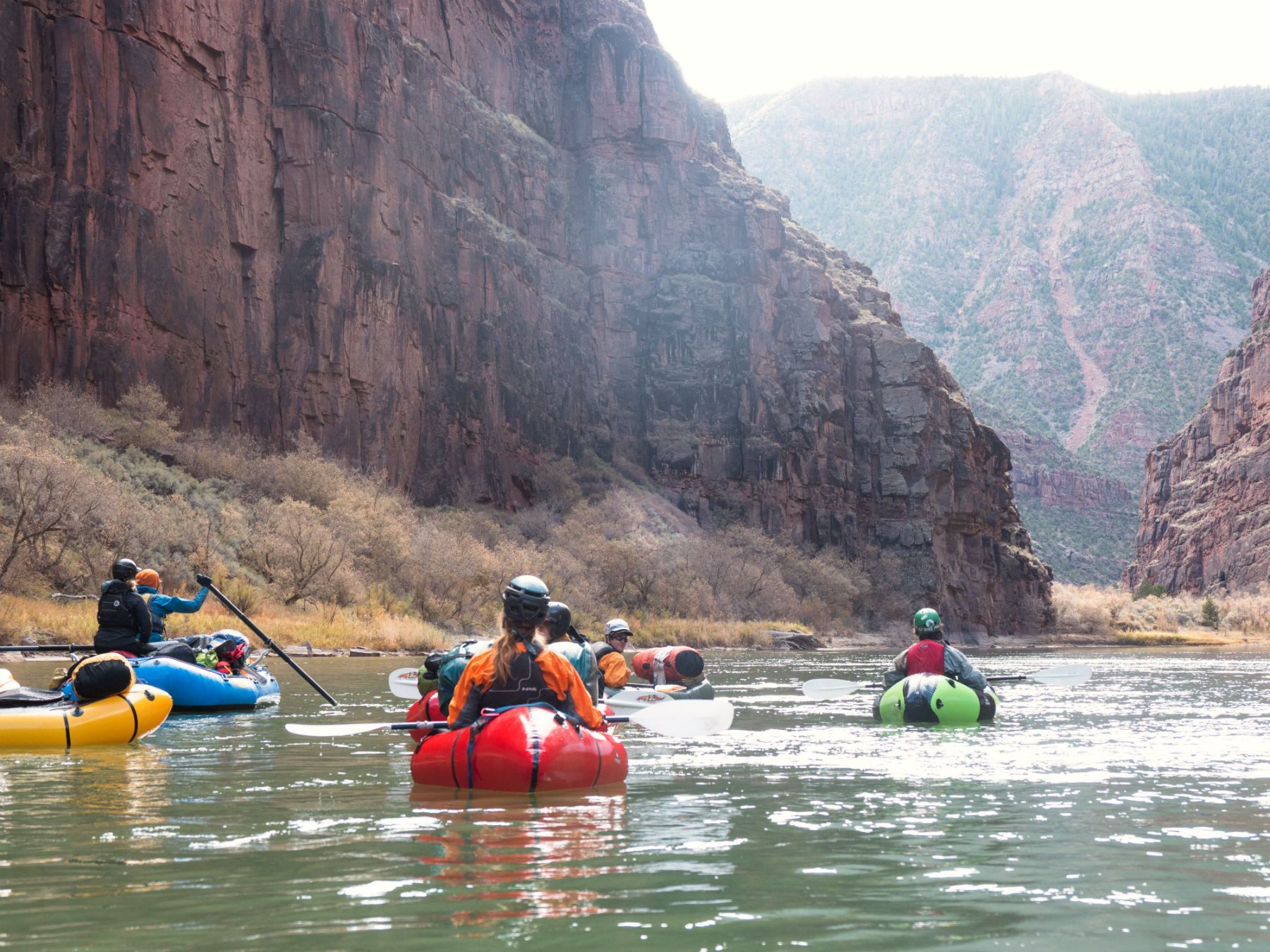 The Gates of Lodore section of the Green River is 44 river miles, punctuated by sections of Class III-IV rapids. The Green River is one of two rivers that flows through Dinosaur National Monument. The other river, the Yampa, is one of the last dam-free rivers left in the West, or as I like to say, the first “freed from a dam” river of Colorado. Hopefully, we can find a way to free others.

The two converge at Echo Park, which has significant conservation history. In the 1950s, David Brower joined the fight to eliminate the Echo Park Dam from the Colorado River Storage Project. His and other conservationists’ efforts were successful. I paddled the Yampa back in April, and its majesty brought me to the Gates, ready to explore the other side of Colorado’s northernmost monument. 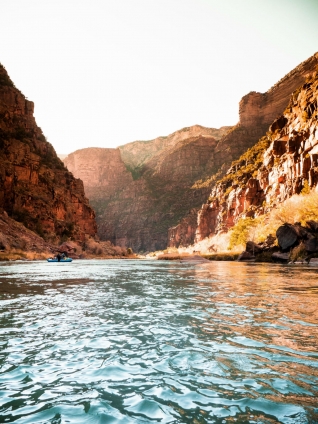 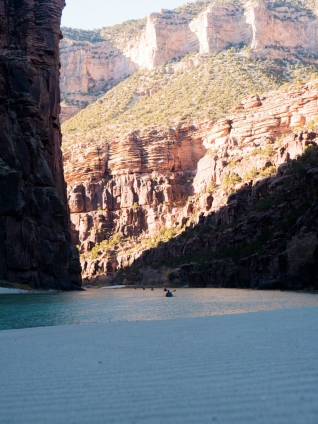 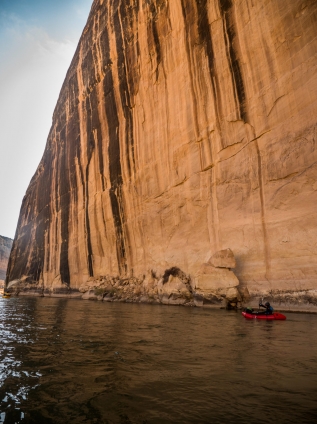 Our group of nine had a mix of experience—from seasoned paddlers to a first-timer—most paddling packrafts with one support raft. That support raft made for a rather luxurious trip. We stockpiled the rubber with warm liquids, extra layers and all of our food.

There are a lot of advantages to jumping on a Low-Use Permit, but given the nature of these trips occurring in colder weather, there are a few tips that I wish I had had in preparing for this one. I’ve worked to simplify and consolidate these tips so that you might feel a bit more prepared for your next cold-weather paddling excursion. 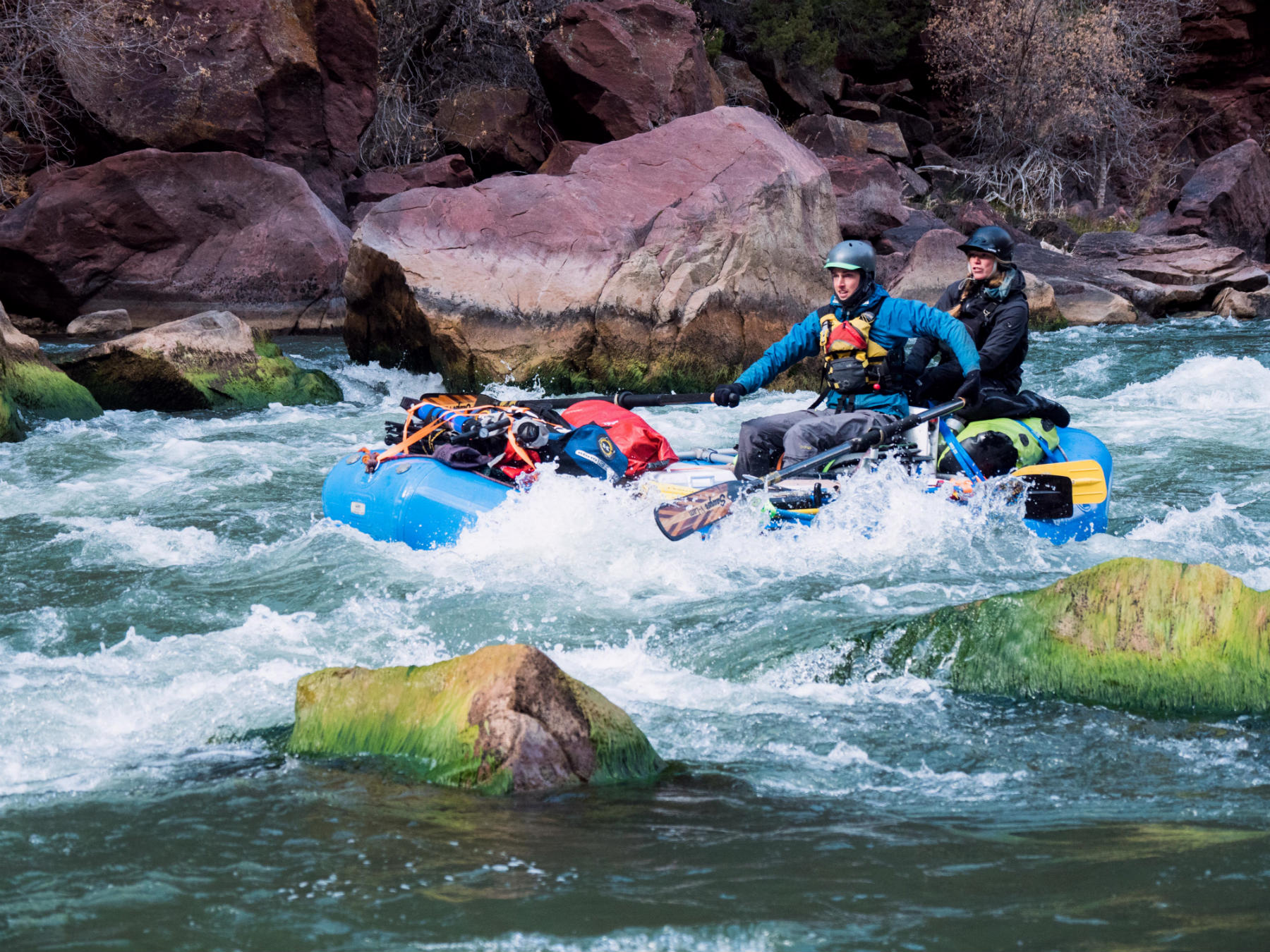 Level Up with a Drysuit
When it comes to cold(er) season boating, having adequate waterproof gear or a drysuit is crucial. This was my first trip in a drysuit, and wow, what a game-changer. I think every recreational paddler talks about wanting a drysuit, but tend to rely on other (cheaper) systems that work instead. While I would never judge someone for those practices—I was that boater up until this trip—I cannot tell you how dramatically the drysuit changed the game for me.

Not to mention, when in a drysuit, you become a lot more helpful to the group. From helping unload gear in deeper water, to having a quicker transition from wet and cold to dry and ready to cook dinner, you’ll be the person in camp everyone is thankful for. 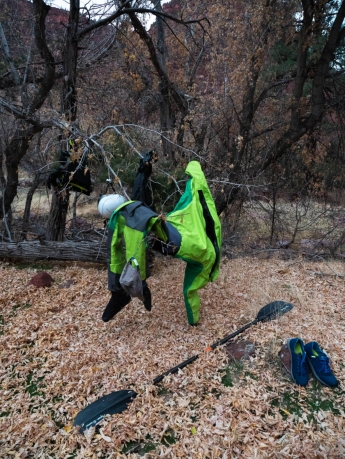 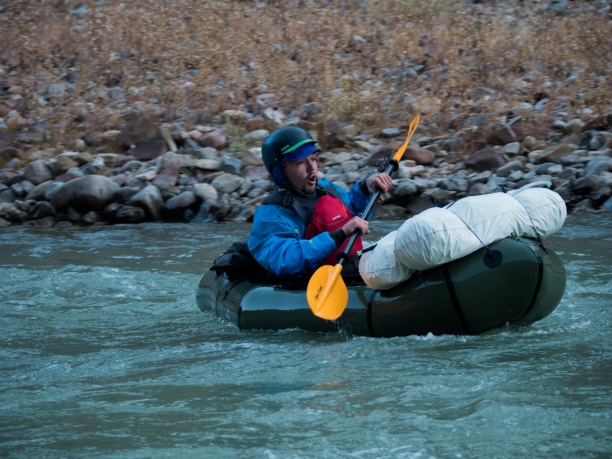 Learn How to Turn on Your Body Furnace
Unlike summer trips, going for a quick dip out of your boat is less than desired, in fact it can be quite dangerous. With the sun just barely dipping in from the rim of the canyons, we often found ourselves paddling hard just to generate heat—turning on that body furnace. Paddling is an easy way to generate heat and keep your core insulated, but whether you choose to invest in a drysuit or are still working with the dry top and dry pant or neoprene combo, it helps to fuel your body furnace with ample layering. Choose technical apparel that wicks excess moisture and dries quick—think fleece. Just buy fleece. 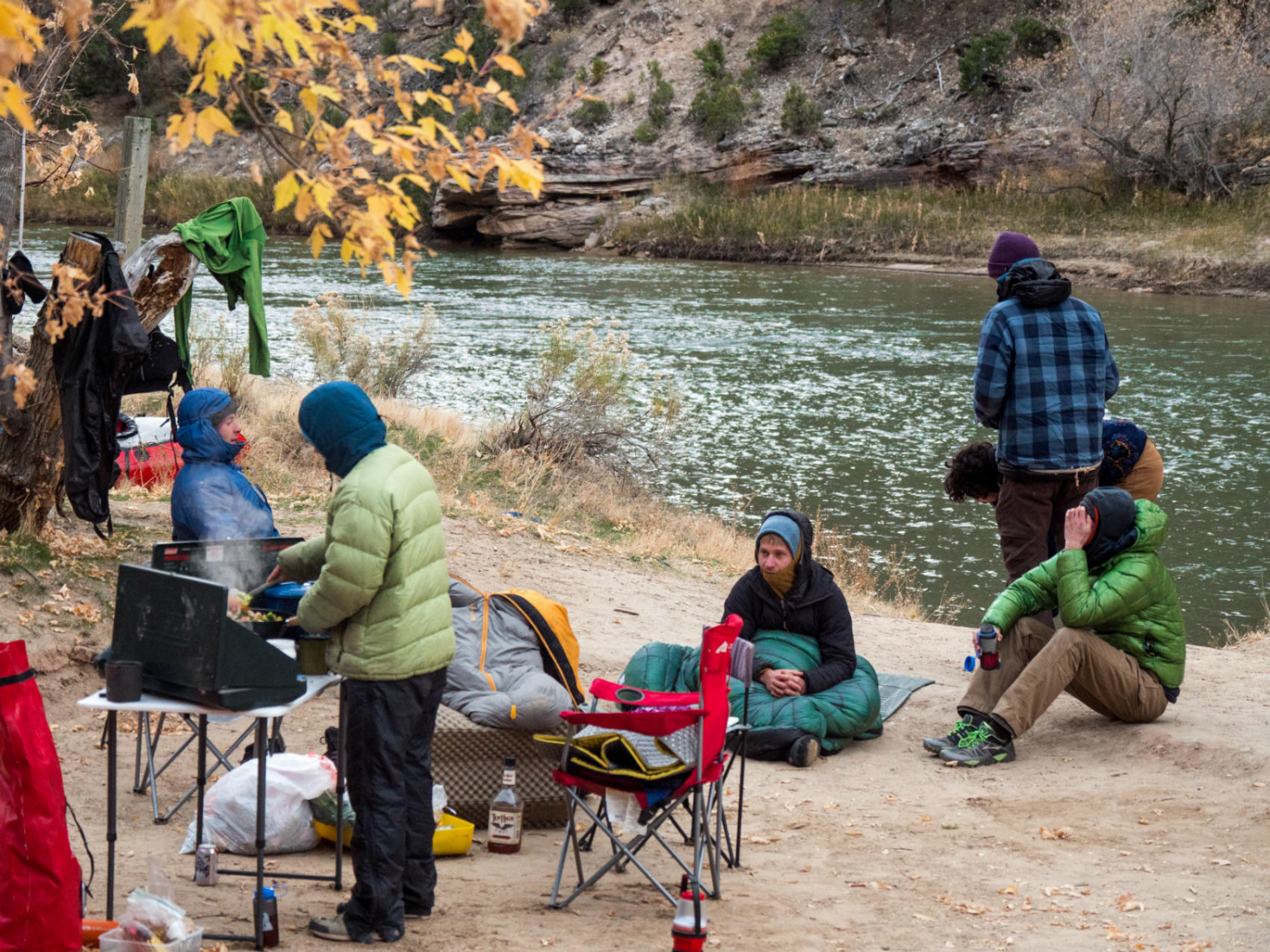 Pack Beverages (and Food) That Will Warm You Up
Staying warm in your boat is half the battle. Once we got to camp, we transitioned from drysuits to wearing our sleeping bags like onesies. Each night, a similar pattern unfolded. Slowly, a circle of sleeping pads and bags began to form around the coolers of food. Inevitably, someone started snacking, which would lead to chopping and preparing dinner. But not everybody was willing to take their hands out of their toasty bags.

It helps to plan meals that don’t require a lot of prep or time. Soups are not only easy to feed a lot of people, but the broth doubles as hydration and warms you with each spoonful. On the other hand, whiskey takes no space in the cooler and zero prep. I encourage a bottle (or two), but it’s not essential…maybe essential. Regardless of what you eat, staying warm throughout the day burns more calories than summer boating. You should eat dinner. The more the better. 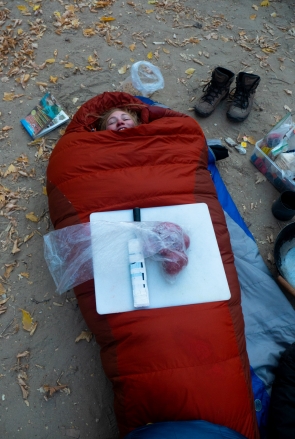 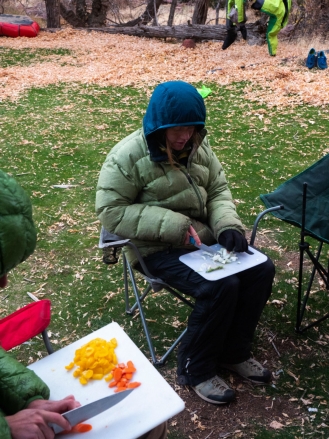 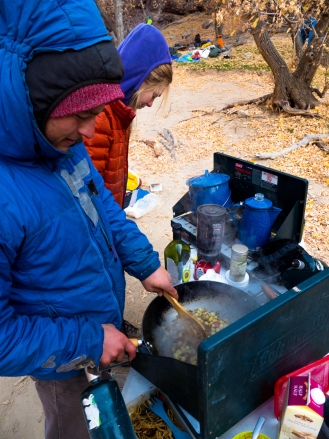 And after dinner, although the thoughts of cozy slumber may overwhelm you, don’t forget, you’re on a river trip. The campfire and camaraderie is the real reason we’re out here. Unfortunately, another symptom of the dry winter and hot summer meant that rangers strongly discouraged fires, not to mention the necessary nature of having to pack in all of your firewood. But once we passed Echo Park, the regulations changed, allowing us to gather firewood. And so, on the last night of the trip, we let ourselves have a campfire. 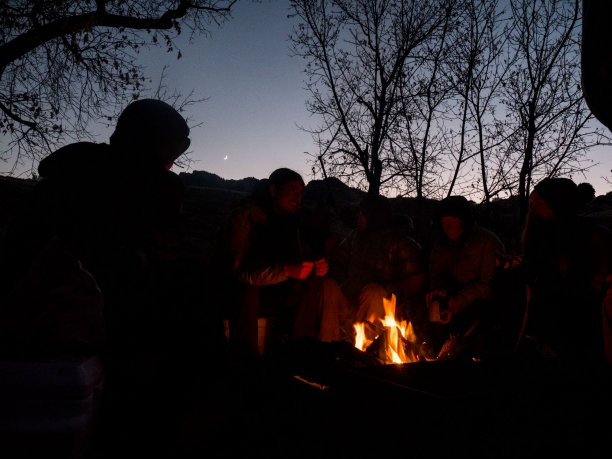 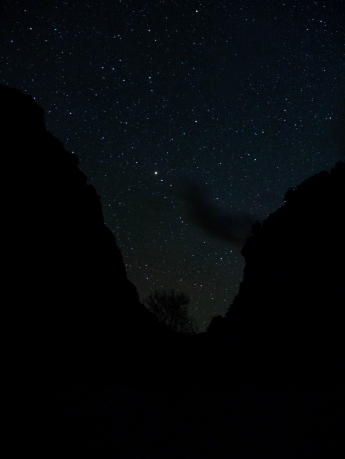 Bring Some Version of a “Board Game”
With the sun setting early, it was hard not to succumb to an early bedtime. But while some of us prepped dinner, others broke out the games, igniting a friendly competition. Each night, no matter which game we played, the draw of a rematch beat out any thoughts of sleep for a few hours. As stars began to shine, headlamps illuminated the travel backgammon board—one of the best last-minute gear decisions we made. 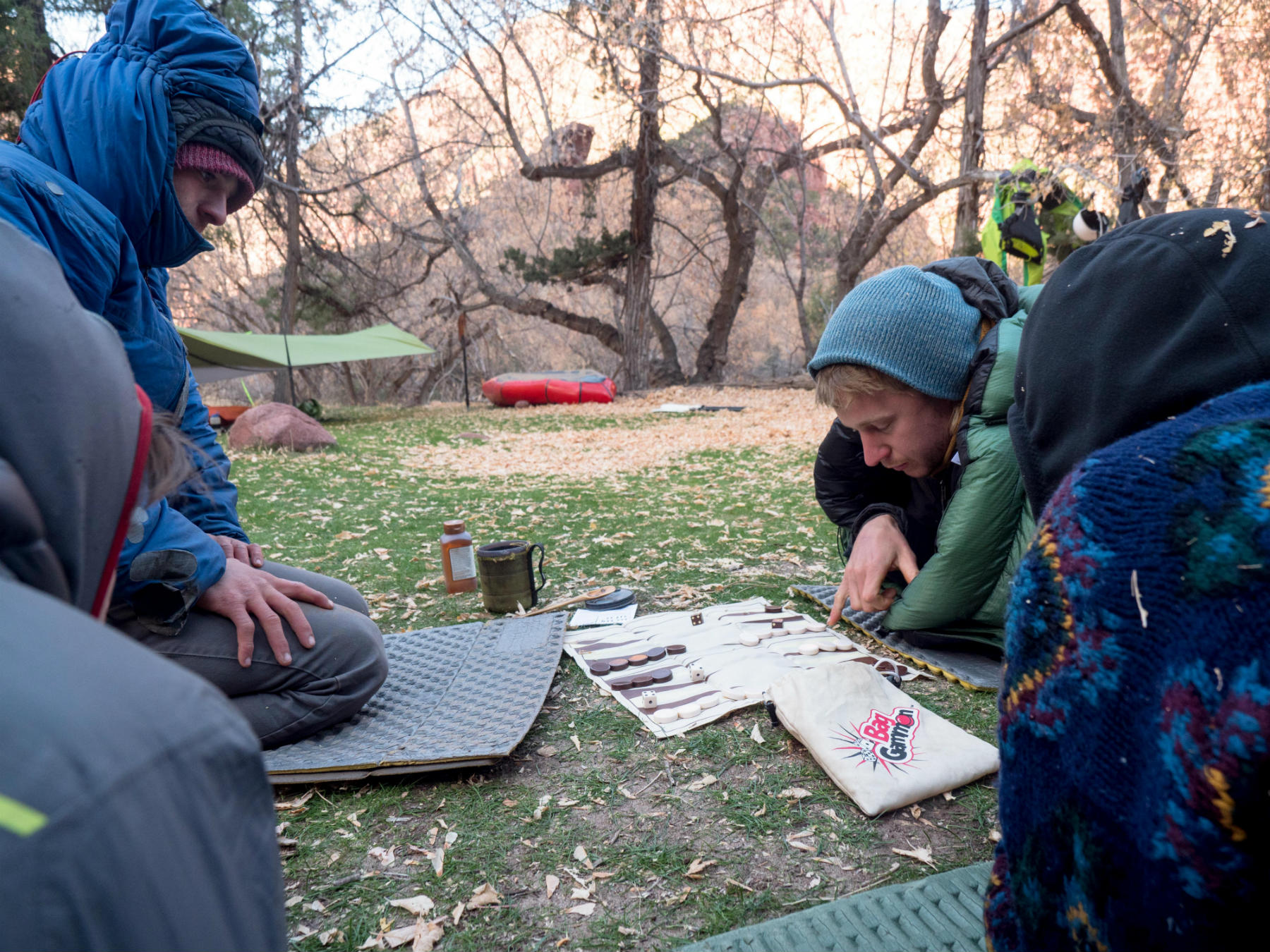 Be Surrounded by Good People, Some You Know, Others You Don’t
Inevitably, a feeling of group cohesion and camaraderie takes over on these types of trips. The best part of river trips is getting to know new people and deepening the bond with those you knew before. Five days never really seems long enough. Perhaps it was the cold, but the connectedness of the trip really began to take hold as soon as we passed through those grand gates.

Having a few novice paddlers on the trip helps build that bond too, as they look toward the more experienced boaters to lead the way. Hell’s Half Mile is considered the most difficult rapid on the Gates of Lodore, and though the Green River is a dammed river, keeping the flow relatively consistent, a dry winter paired with a hot summer meant the river was running lower than usual. Luckily, that made the line through Hell’s Half Mile a bit more manageable for those with a little less experience. There was some creative routing necessary to thread our tiny boats through the field of holes and submerged boulders, but we managed and celebrated at the bottom. 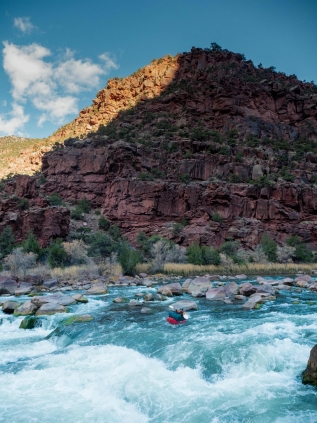 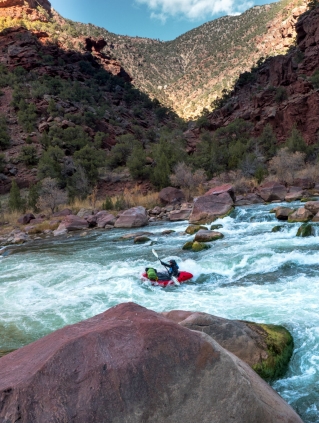 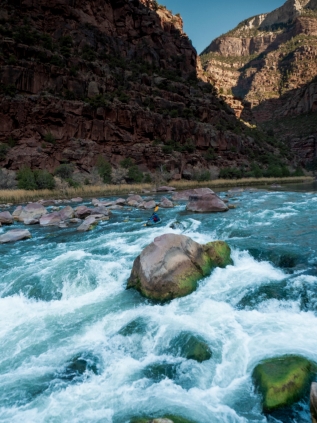 The trip went off relatively without a hitch, aside from a broken paddle (always have an extra!). Some nights hovered just above the single digits, and days were not warm, per se, but definitely manageable. The sunsets, however, were pretty spectacular. All in all, this was the first of what I hope will be many, late-fall/winter paddling trips.

Just remember, even when it feels like the seasons have changed, the flow is low and the days are short, there is water out there to float. So, float on.

Editor’s Note: Guest contributor Michael Stevens is a director and photographer based out of Colorado who’s motivated to create through exploration.