As we round the last oxbow for the evening, we beach our SUPs at our first night’s camp. I’m exhausted and slightly frustrated. Not sure if I want to cry or throw a tantrum. We just paddled more miles than we ever had in a single push and we still had seven more days ahead of us—a total of 114 miles. Sunburnt against my proactive efforts and reeking of sweat and grime, all I want is a shower and that won’t be in reach for three more days.

I drop my face into my hands and try to wipe away the grimace before my husband notices that I’m into pieces. I can’t help but wonder why we are doing this. We’re celebrating our sixth wedding anniversary and our first-ever multi-day trip away from our kids on the winding Neuse River in North Carolina. I should feel hyped right now, but the exhaustion and realization of being in BFE has gotten to me—and way sooner than I imagined. I pull myself together and put my one “moment” behind me and set up camp. 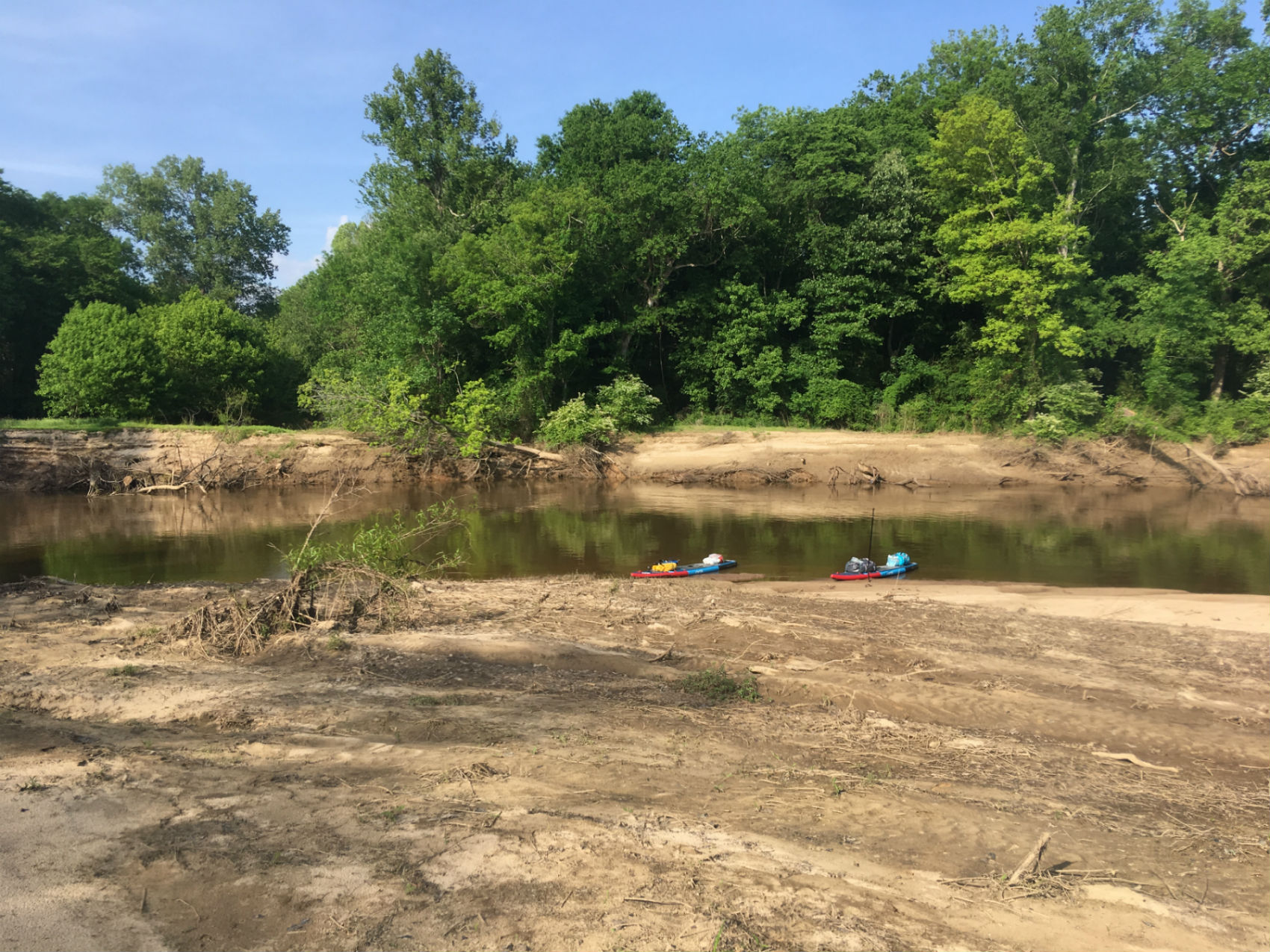 We scatter our gear around us in a semi-circle, keeping everything within an arm’s reach. I bask in the experience of wine in the wilderness as the trees start bustling in the distance. A coolness creeps over us. The first night was our only chance of bad weather, but the forecast had only predicted rain. Yet, during those last few sips of wine, the distant wind grows louder, reaching an intensity that makes us question what we are hearing. We exchange looks of confusion–A boat? Rain? 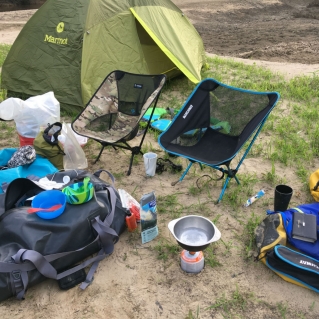 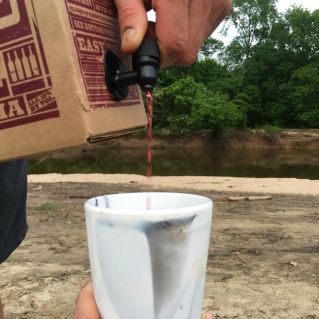 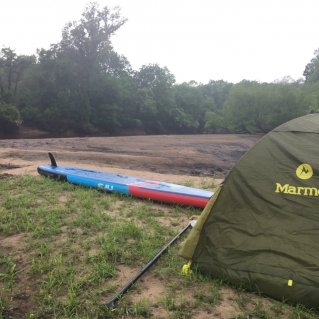 As soon as the raging wind has reached our beach, fat raindrops begin to fall from an eerie sky. With no good reason to hang around outside, we start stuffing our gear into our dry duffels. (There’s nothing worse than going on an expedition with wet gear other than maybe not having it.)

I love a good storm. And with my earlier freak-out still fresh in my mind, I’m oddly excited to lay down and journal, but it’s not long before the need to keep the tent from buckling replace my initial joys of journaling. We can only assume our stakes have been pulled out and flung across the beach. I glance over at Daniel who’s using every extremity he has to keep the tent erect. The torrential rain shows no sign of letting up and at this point, the wind has intensified to grown-man-lifting strength. Literally. I watch as Daniel takes the brunt of the gusts, occasionally lifting him off the ground.

We entertain the thought to call for help—we have service after all. And truth is, at this point I don’t want to be here. Less than 24 hours into our grand adventure and already I’d rather be cuddled in bed with my kids. Weathering a storm like this seems ignorant but I wouldn’t be the one to call it. 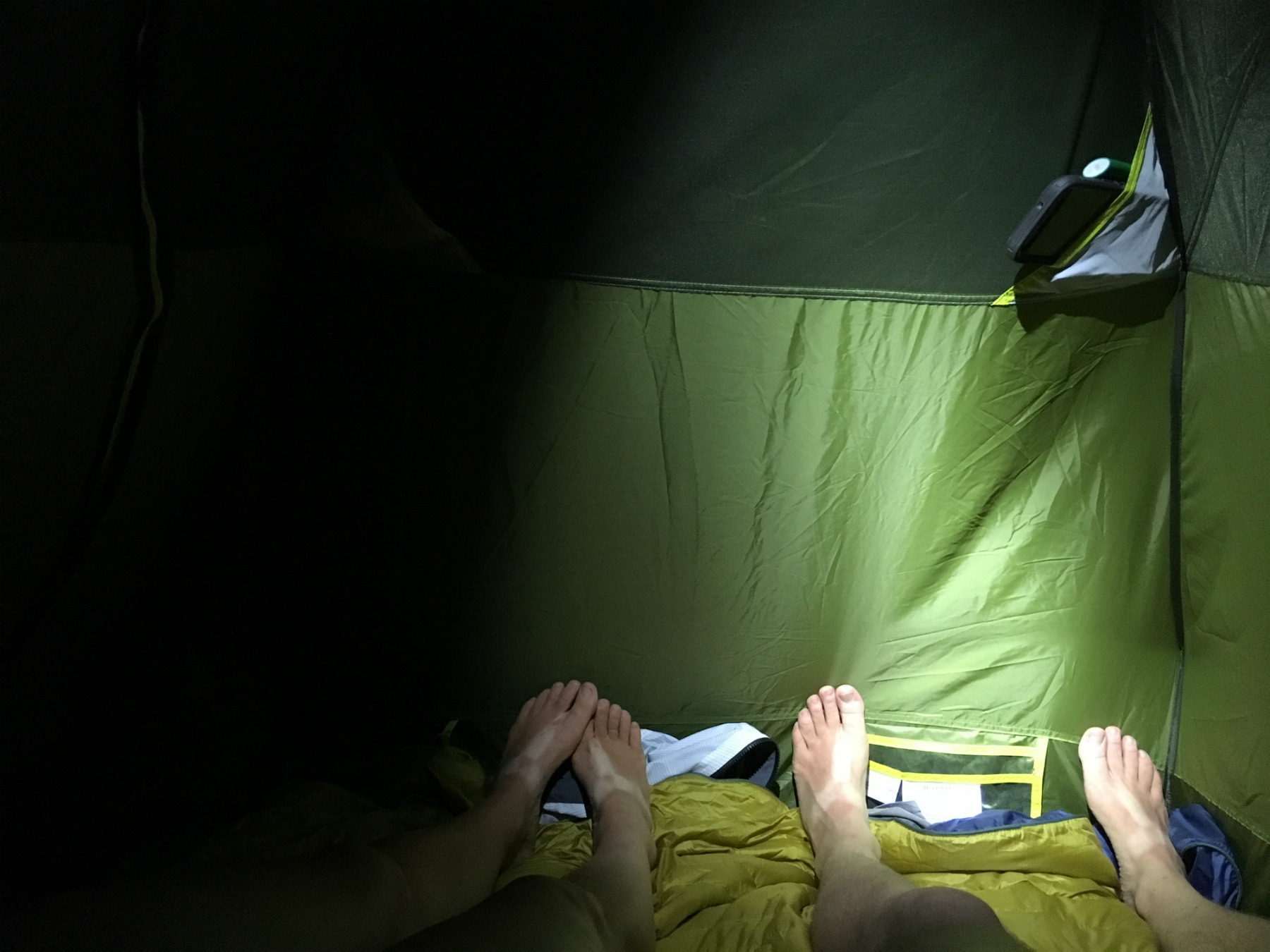 The storm lasts only a couple of hours but it feels like days. But somehow a blanket of tranquility falls over us as the wind sings us to sleep.

Nature’s third-shift wakes me in the early morning hours. I check that our gear is still nestled under the fly and fall back into my pillow with relief. Glancing at my husband, we mutually (and silently) celebrate the fact that we made it through the night. I can’t help but remember my moment of weakness as we hit camp the day before. After weathering a literal storm, I try to push aside the thoughts of more internal ones. Turns out, there would be more.

Although roughing it in nature is where we thrive, certain moments tug on our blanket of comfort and test how strong of a team we really are outside of parenthood. 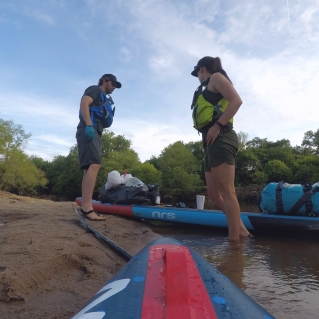 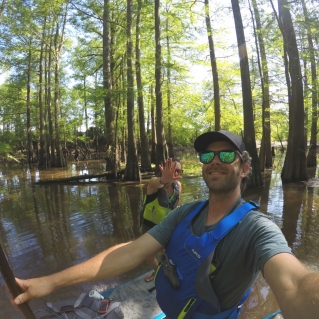 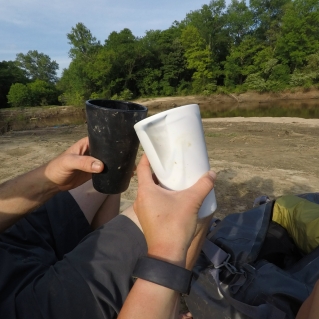 Like our mid-paddle poop breaks that are inevitably a collective effort. First, you have to admit that, no the urge is not going to pass. Then you have to find a place with a little seclusion to eddy out. From there, you ask your partner to hold your board, which isn’t a big deal until you realize you don’t have any toilet paper. So, you have to ask for TP, which they somehow have to deliver to you without losing not one, but two boards. (Tip: each person should carry TP to avoid that awkward moment). And let’s not even get into the in-the-wide-open squat that isn’t comfortable for anyone no matter how long you’ve been married.

Like the nights when fatigue rests so deeply within us that silence grows fonder than conversation. Then waking in the wee-morning hours wondering if we told each other goodnight.

Or when the coyotes and wild pigs become curious outside the tent at 2 am, Forcing us to orchestrate the most eclectic sounds to deter them. 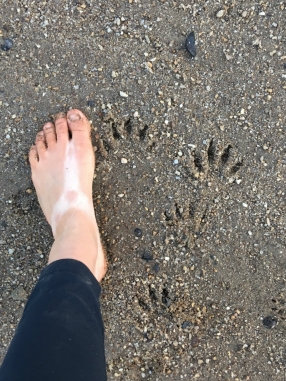 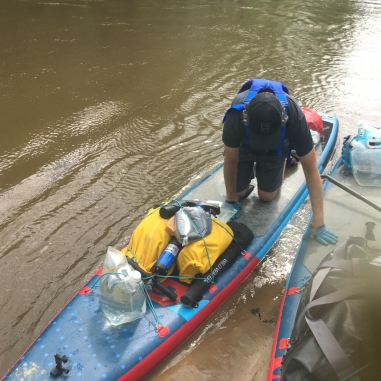 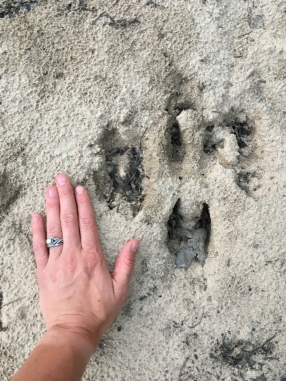 Like when our campsite falls through due to shady circumstances and forcing us to paddle through dinnertime site searching. Inevitably, one of us feels the need to take the blame and the other must reassure them that it isn’t their fault and that we will be okay—unsure if we would be setting up camp in the dark… or be okay.

Like sleeping on a slanted embankment and the frustrations of continuously sliding down until you’re crumpled at the foot of your sleeping pad like an old sock. And somehow, always waking up in this position, just after your partner has repositioned himself and seems to be sleeping so peacefully. So out of spite you wake them up with your rustling but then feel immediate guilt for doing so. 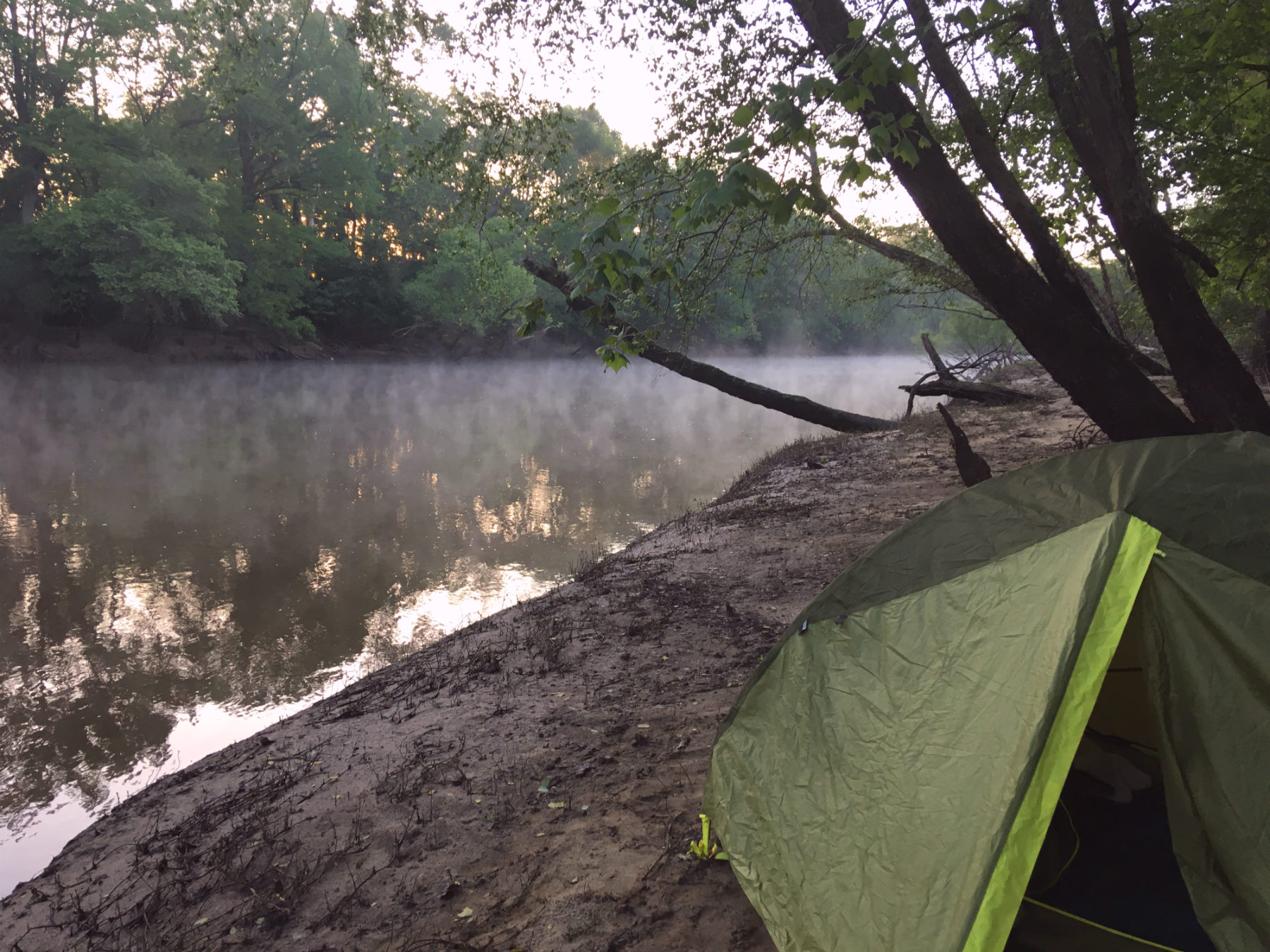 Or the times we snap at one another for no good reason other than pure exhaustion. Resulting in the next hour of paddling in complete silence while maintaining at least a 20-foot distance.

Like having to ration our last half-gallon of water for the remaining 18 miles of the trip because someone only filled two water bags instead of all four at the previous stop. Not to mention, the foul mood that drinking hot water on a hot day puts you in.

Even though this is where we belong those moments tested us. The literal storm that first night was tough but the internal ones that smoldered throughout the trip were the trickier to overcome as an individual and a teammate. Regardless of which storm, in the end, they both brought us closer than we realized in the moment, leaving us with something to take home and apply to the next adventure. Just like any partnership, on the river, we’re one. From a buckling tent to a silent night, coming together as one not only became an expectation but a necessity. 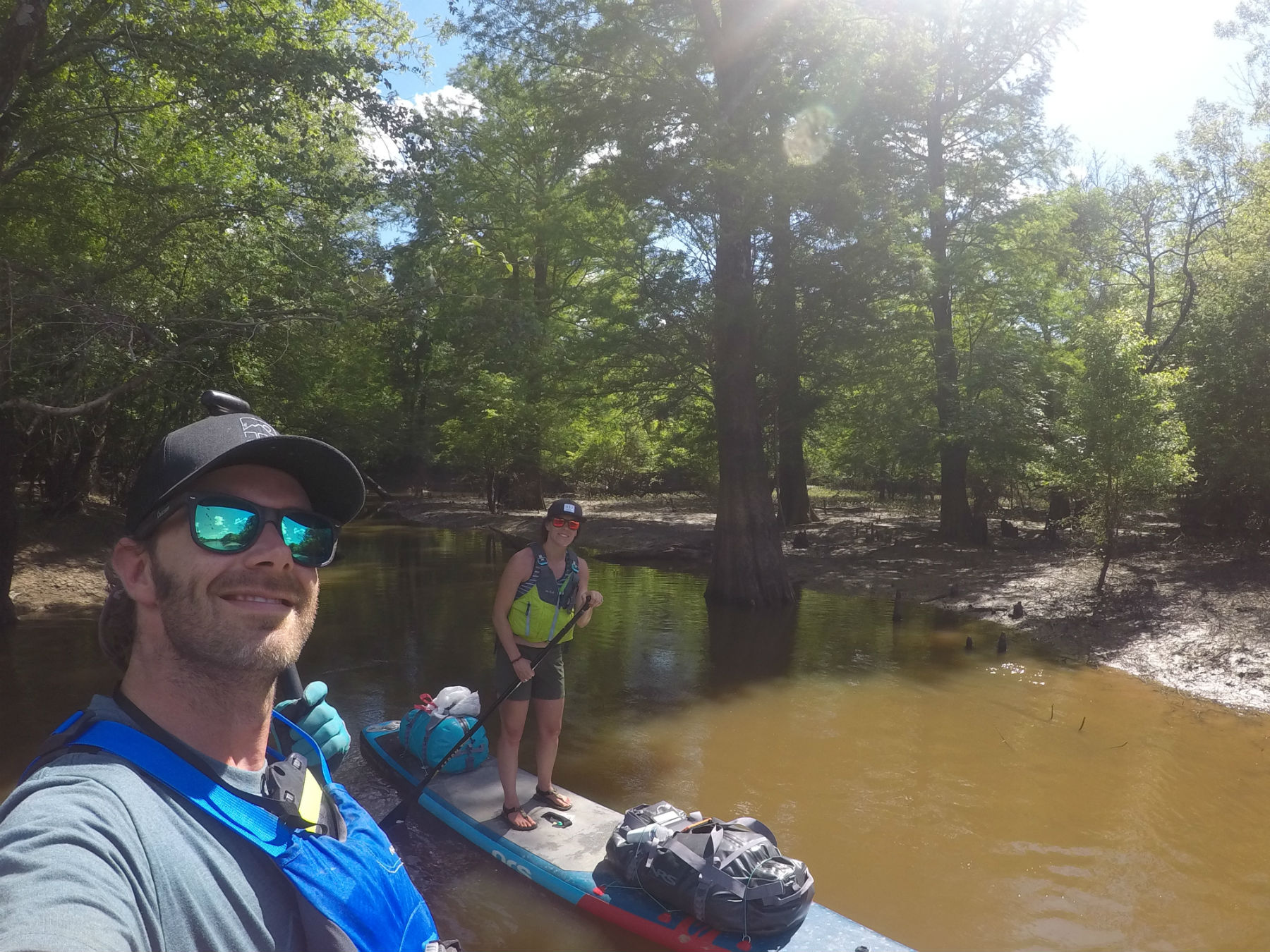 The calm of each morning helped us reflect on the previous day and the reasons we chose to take this adventure. There’s a beauty within the chaos and that beauty is far greater than the negative. That’s what makes these trips so special. You can plan as much as you’d like but when you’re in nature, she calls the shots. You take everything that comes with the expedition and live the adventure. And at some point go with the flow.

Editor’s Note: Guest contributor, Ashley Hardison, is a stay-at-home mom to two kids with a passion for yoga, stand-up paddling and cooking.