An Anniversary SUP Adventure on the Neuse River

The plan and reality of an adventure couldn’t be further from one another. Against all efforts, a trip never goes as anticipated. We may have spent months planning, but the river writes her own story and we’re just mere characters. This trip wasn’t the first time we’ve been forced to throw our detailed itinerary into the wild but letting the river guide our adventure somehow always unravels the perfect trip even if it isn’t what we expected.

On the hunt for a wedding anniversary adventure, the Neuse River in eastern North Carolina and the towns dotted along its banks drew us in. Just the two of us, everything we needed for a week strapped to our stand up paddleboards, with putting in miles as the only daily requirement was going to make for our wildest anniversary trip, yet. On top of that, this was one of the very few times since having our second kid—two and a half years ago—that we would be childless for an extended amount of time. Did we even like each other still? 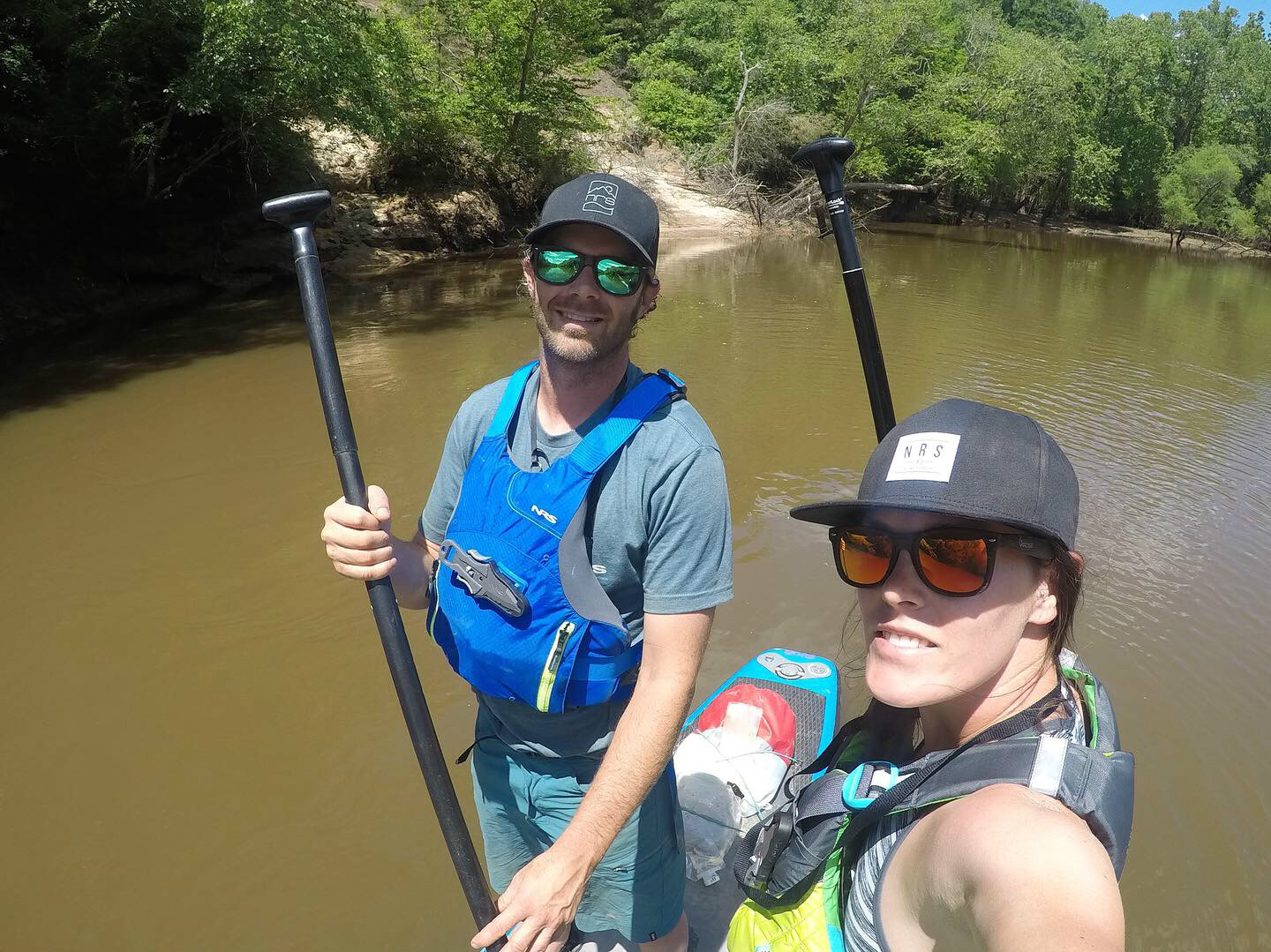 Ambition reigned over our sensibility when we decided to tackle 215 miles of the Neuse in just eight days. After a few months stressing over the thought—and monotony—of eight 30+ mile days, we refigured our plan, backed off of the mileage to 114 miles while still including stops in towns that would offer all of the views and eats.

The thoughts of exploring two towns—Smithfield and Kinston—really excited us. Each one’s main streets backed up to the river, providing food and drinks within walking distance. We looked forward to breaking-up our freeze-dried meals, hearing a few river stories and to maybe tell our own. I carefully planned each day down to paddle miles, arrival time, restaurant, and a specific spot to camp. The Neuse had a different itinerary.

Originally, we planned to arrive in Smithfield late afternoon on day one, eat at a riverside restaurant, The Little Brown Jug, then hop back on our SUPs and paddle another mile to camp along the riverbank. Arriving earlier than expected, our eyes set on a quaint building, its deck overlooking the greenway and river. The laughter spilling over the treetops gave me all of the hope in the world for bar nachos and an IPA. Pushing the doors away from us, we walked in and as if we turned it off ourselves, the music stopped. No lie.

We awkwardly stood in the doorway of the now-silent, standing-room-only pub peppered with locals. Sweaty and reeking of a hot day on the river, all eyes turned to us as we asked for food. The bartender offered us microwaveable pizza. We declined and left the dimly lit pub, opting to explore the small festival in town. Walking through the streets of white canopy tents, we bought lemonade and smoked ham sandwiches, which we devoured to the sounds of live music before getting back on our boards. 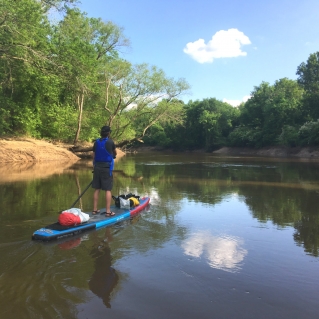 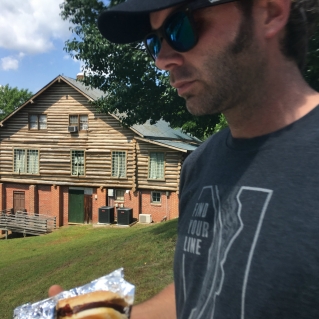 Pit-stop in Smithfield for festival food and live music. 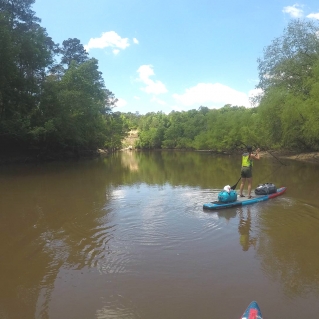 After a couple of nights on the river, our next off-river stop was the River Bar in Goldsboro. Our itinerary was totally shot from the beginning but winging it day-by-day became our jam and at this point, we were already ahead of schedule. The owners of the River Bar had given us permission to camp on their property and after Smithfield, we were pretty dang excited. As we approached the dam, we had two options: go left and paddle seven miles to the destination or portage the dam and paddle one mile up river to our camp. Arriving at the split midday and with our plan to end our day in Goldsboro, we chose to paddle the seven miles. I say we, as if this was a group decision. It may or may not have been my idea.

Rounding the last bend, we spotted the bar on a hill overlooking the water. The cute yellow building from afar turned into a run-down biker bar as we paddled closer. We couldn’t believe it—fooled again. If only I had thought to ask ahead of time if they served food. Thankfully, I packed enough meals to support us through our trip—you know, just in case. 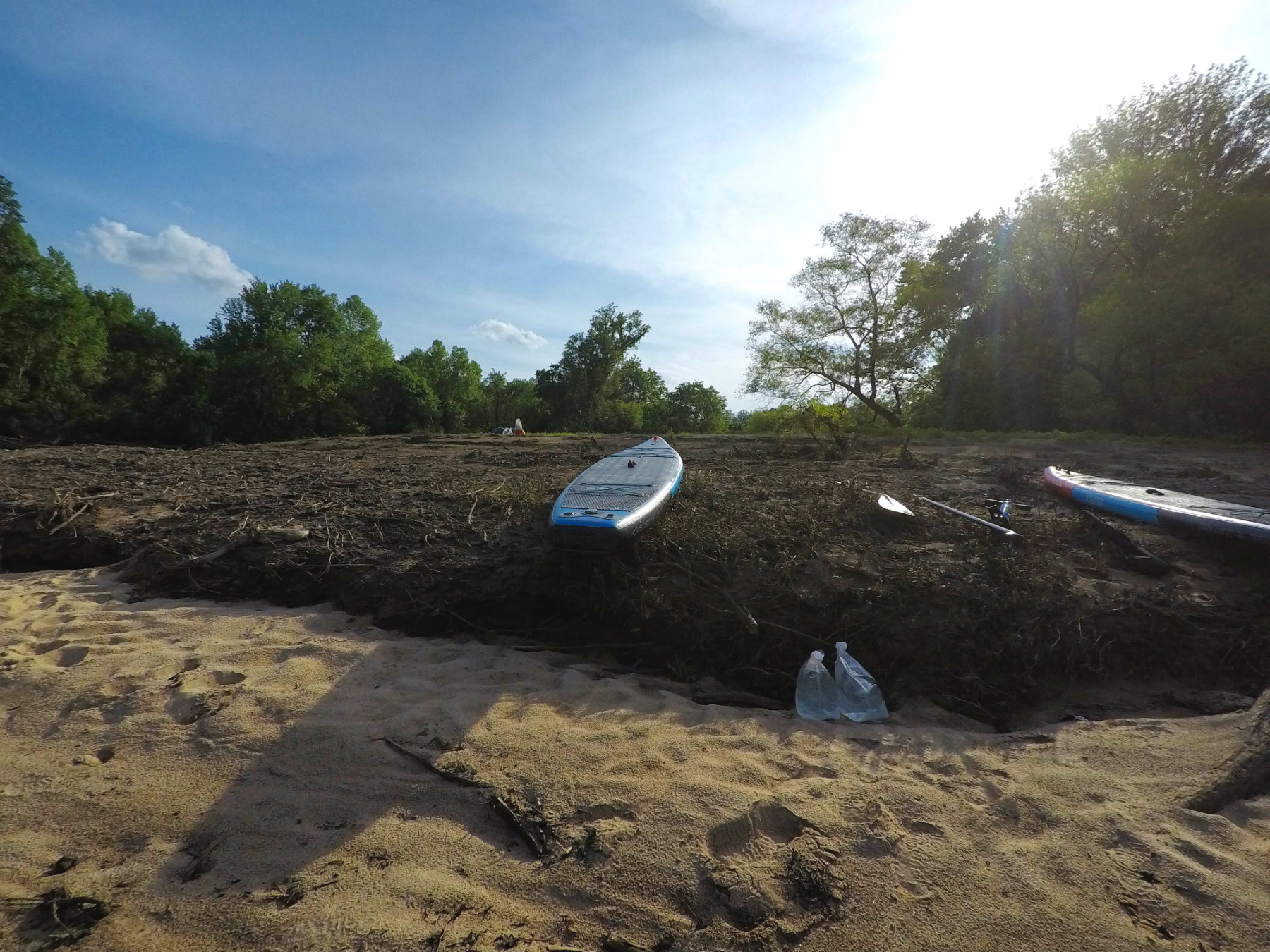 The bartender motioned to where we could camp which was a solid half mile trek carrying all of our gear. I wasn’t into it. Low on drinking water, we asked if she minded refilling us and told her we would paddle down to see if we could access the camp from the river. A recent flood had washed out most of the riverbank. So we said goodbye to what should have been our camp for the night and continued paddling. The sun wouldn’t set for another three hours, so we had plenty of time to find a suitable camp. But the farther we paddled that night, made us that much more ahead of schedule.

Putting in nearly 29 miles, we settled for a subpar campsite on an unlevel bank just past Seymour Johnson Air Force Base. We made a single track pathway from our SUPs to our tent to avoid slipping off the muddy bank. Coyote and hog tracks littered our site. Just before crawling into bed, I dimmed the lamp and positioned it on our SUPs while my husband fashioned a knife on the handle of his paddle just in case things got rowdy.

Spoiler alert: Daniel didn’t get to use the shank. 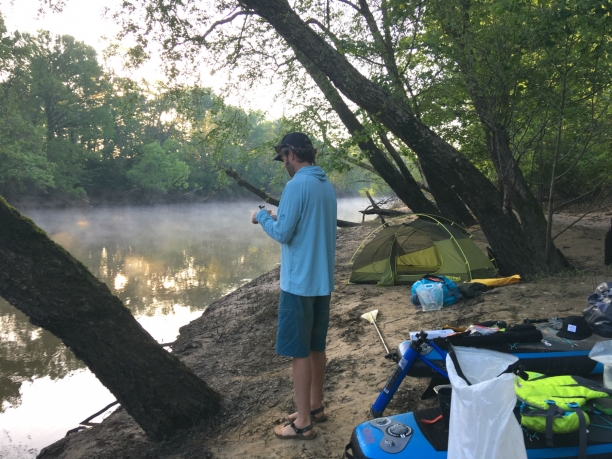 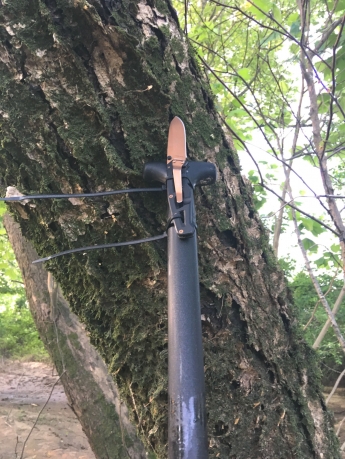 Had we stayed true to our schedule, we would have spent our anniversary night (night five) at Cliffs of the Neuse State Park. The park had captivated us with the thoughts of hiking, hot showers, the chance to hand-wash our clothes and delivery pizza. It would have made an amazing anniversary and the time off the water would rejuvenate us to conquer the rest of our trip. That was the plan, of course, despite our early arrival we still possessed child-like excitement for showers and real food.

We pulled our SUPs closer to the granite bank to meet a couple of hikers. After chatting with them, we made a quick call to the ranger, who not only denied our request to camp at the base of the Cliffs but also informed us that the park had closed the bathhouse for renovations. Lacking a single good reason to stop, we continued until we found our riverbank B&B. 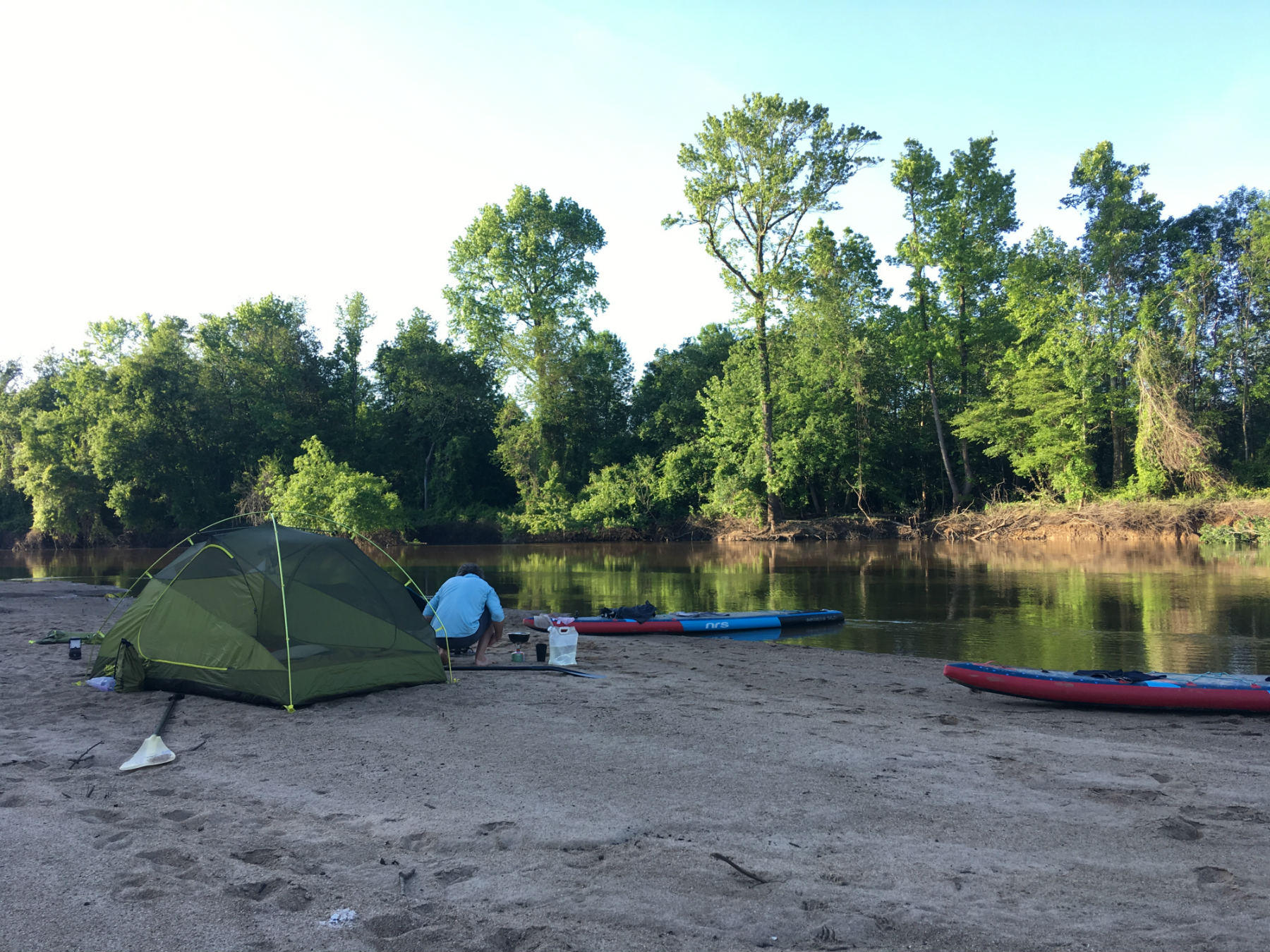 Nearing the takeout, we managed to put ourselves a few days ahead of schedule which only meant we would see our kids sooner. We had zero complaints. Going with what the river dealt, we made do and it was perfect. Camping among the dense forest every night drew us into our tent at dark allowing us to wake up early and tackle the day. During those few moments of feeling less in control, we realized that there’s something special with going with the flow and seeing what the river has in store. 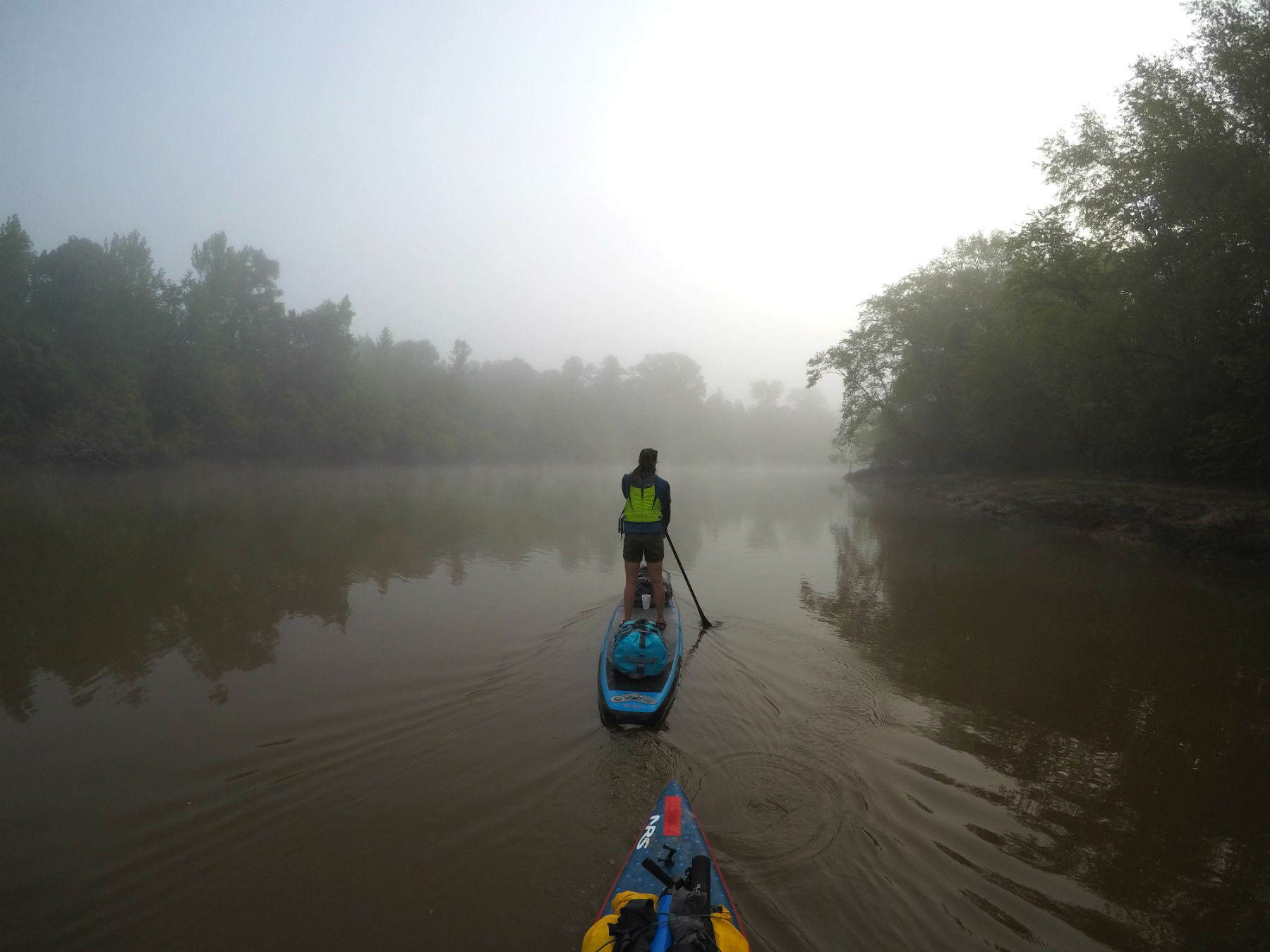 Anticipation for the Neuseway River Park drained. It was our last day and although the least amount of miles it was the hardest paddle. Our muscles ached and blisters rounded into the double digits. Finishing our 114-mile paddle in five days to celebrate our anniversary in Kinston seemed almost too perfect. But those last 18 miles felt like 40. We deflated the SUPs and loaded all the gear. Although we still hadn’t had a shower, or even have a room booked for the night, it was finally time to celebrate our anniversary and our accomplishment of 114 miles down the river.

We had two places in mind, Mother Earth Brewery and The Boiler Room Oyster Bar, both of which have made a name for themselves in Kinston. Just a five-minute walk from the river, MEB Taproom is housed in a beautifully constructed industrial building, with cathedral windows that reflect the colors of the sky. Plus, the taproom and brewing facility are 100% solar powered. The Taproom welcomed us with a street-side garden and an open-air, flower-filled patio. Grabbing our beers we headed back outside to enjoy the sunshine. It’s funny how harsh air conditioning becomes when you’ve been without it for a few days. The sweat of my Rosé IPA glistened as we slumped into the couch, avoiding the group across the patio deep into a political discussion. 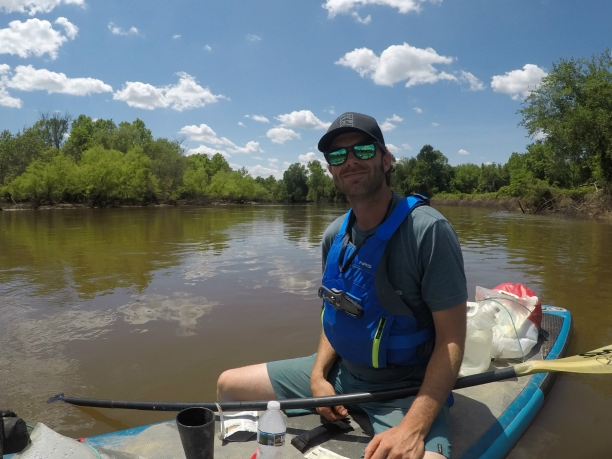 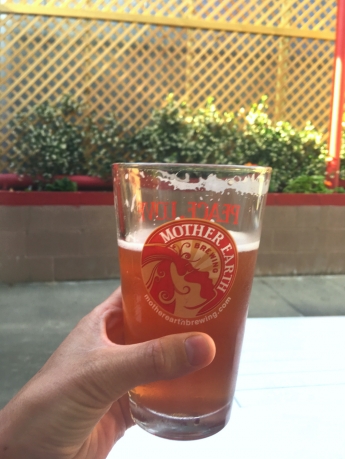 Thankfully, a string of people walked in and asked if they could join us. Single file they each filled in the empty patio furniture. Two of the owners of Kill Devil Hills Rum, “Uncle Ed” the local banker, the General Manager of the Down East Wood Ducks, a Minor League baseball team, and Vivian Howard’s personal assistant groomed us with their energetic laughter—an energy we lacked at that moment—and talk of the day’s baseball game. Their company was refreshing and a welcomed change from the past few days of our own conversations on the river.

They asked us about our plans for the night and where we were staying. After explaining that we couldn’t find a hotel with vacancy due to the baseball games, Uncle Ed excused himself to talk to the owner of the brewery who also owns the O’Neil, an old bank-turned-hotel. His assistant quickly introduced himself and offered us a room if we wanted to stay with them. We gladly accepted and gave him a call after our well-earned oyster and burger dinner at The Boiler Room. 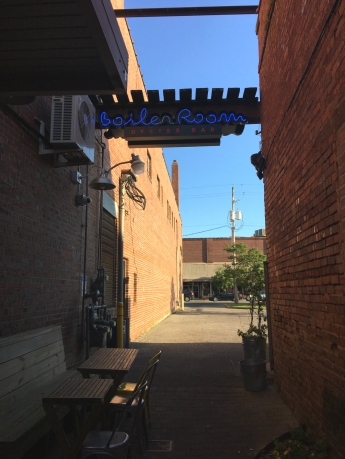 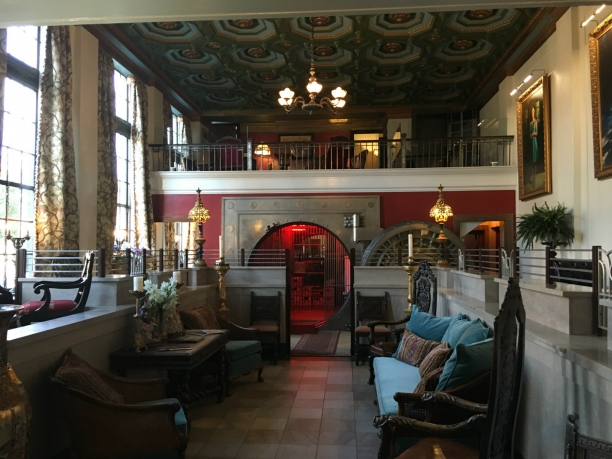 Inside the O’Neil, a bank-turned-hotel in Kinston, NC.

We spent almost a full year planning this trip. I thought we had everything planned precisely. But we learned that flexibility is a great thing and even though you’d like to see and do as much as you can, change is good. Changing our plans and rolling with it shaped our trip into such an adventure. When your only plan is to paddle and camp, you notice things like the angelic singing of the birds, the dense wildlife of the swamps, and the loud silence of the outdoors.

Camping in subpar conditions made that next sandbar extra perfect and more appreciated and we discovered the small things that excited us the most—sipping our morning coffee as we drifted down the river and jet-boiled dinners paired with box wine. Our trip didn’t last the full week as planned but we were able to celebrate our anniversary in the grandest of ways and return a little earlier to our kids who we were missing ever so badly. As wrong as things felt at times, and as fragile as the plan turned out to be, the reality was actually pretty damn perfect.

Editor’s Note: Guest contributor, Ashley Hardison, is a stay-at-home mom to two kids with a passion for yoga, stand-up paddling and cooking.