We wake in the morning to a sky haunted by clouds, hounded by wind. There is no sunrise, just a gradual lightening of the surroundings. The colors of the Canyon radiate as if the light is not coming from above, but from within. Iridescent hues of purple, pink, and green pop on walls, so often depicted in palettes of red, orange, and tan. As we spend the next couple of weeks floating this landscape, time seems to ebb and flow like the river itself.

Sometimes people, events, conversations are suspended, languishing in calm pools, or orbiting in immense eddies. Sometimes the world rushes by as if caught in the downstream current. Sun and shadow dance across a beach with the speed of a specter, a day may last only an hour, a night the blink of an eye. All about us time, time, time, rolls and twists upon itself like a cataract. 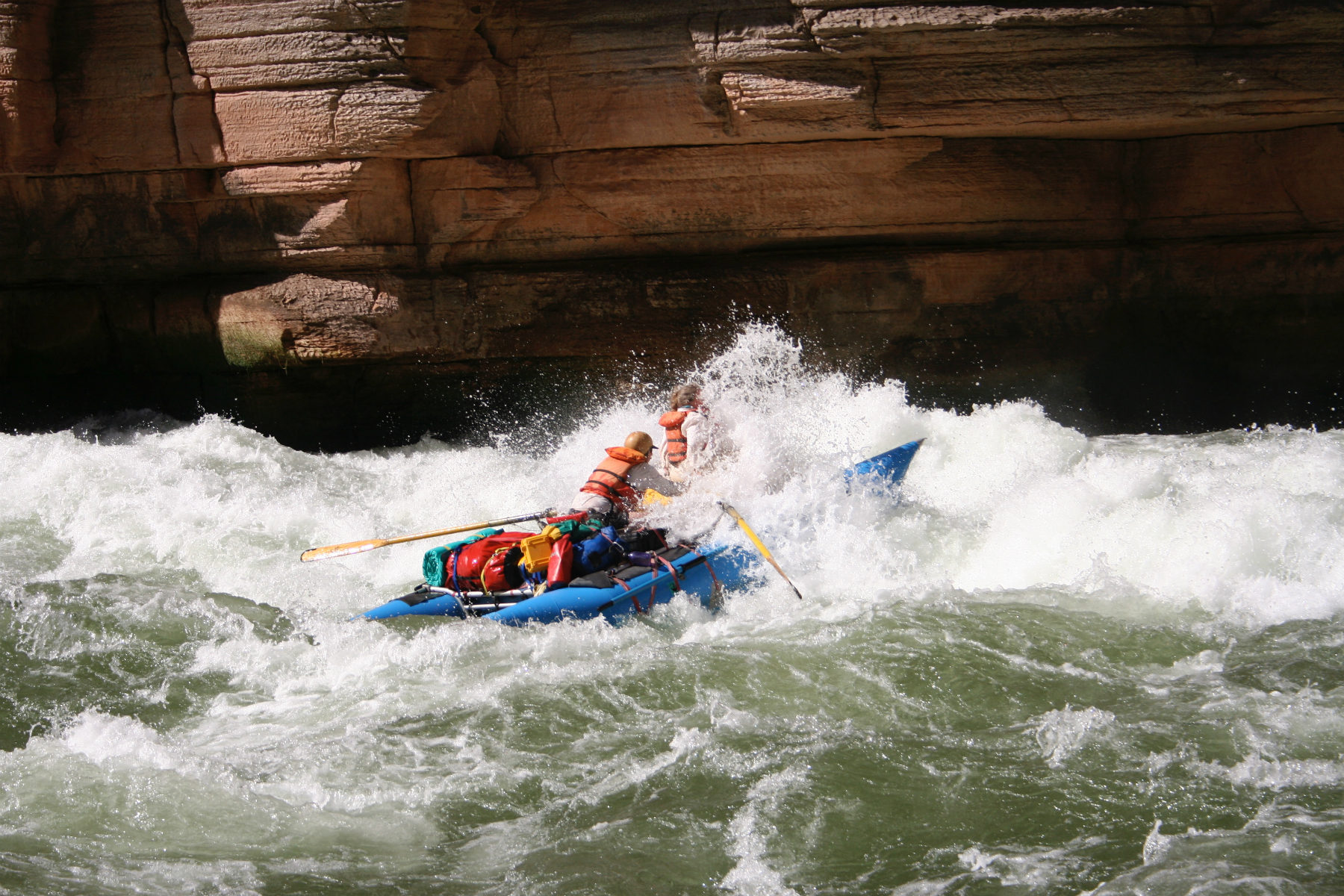 The Grand Canyon has all of the traits desired from a multiday river trip. Intimidating whitewater. Rapids that seem to warp the laws of physics and hydrology. Magnificent scenery. Vistas and sunsets burn into our memories with colors that grow more vibrant with age. But the trait that distinguishes the Grand Canyon from other river trips is the sense of time incarnate.

Eons of geologic activity can be noted with mile markers and relics from those before us spark the imagination. Abandoned oars and boats lend testament to expeditions gone wrong. Pictographs express the visions of a shaman or maybe the sketches of a bored child. Hidden granaries convey periods of fertile weather and brutal societies when food was guarded like treasure. 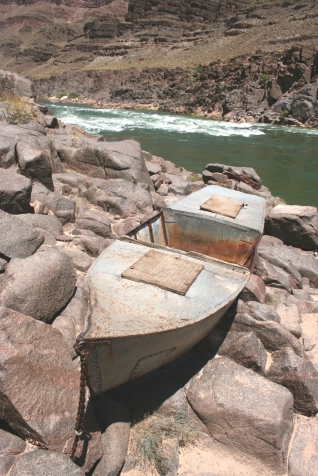 The Ross Wheeler was a boat used and abandoned in a 1915 expedition of the river. William Bass later accommodated the boat and fixed it up to ferry supplies across the river. Mile 108. 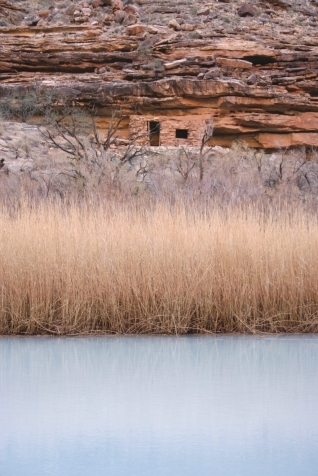 Miner Ben Beamer built and lived in this cabin in the late 1800’s. It’s a well-known landmark on the Little Colorado River just up from its confluence with the Colorado. 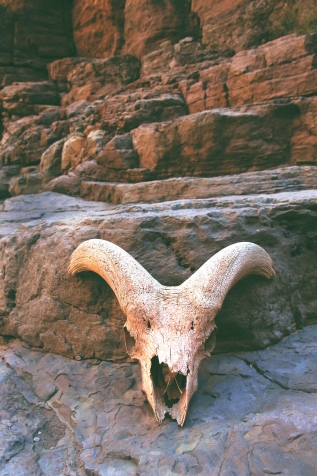 A common cliché uttered at the beginning of a Canyon trip is that it looks like another planet. However, after a few days of watching the rock stack and weave and compress, one realizes that we have not left the Earth, but been absorbed into it. What we refer to as the Grand Canyon is not just the sheer cliffs along the river, but also all the washes and tributaries that feed it.

The best way to comprehend what is going on in the Grand Canyon is to explore one of the many smaller side canyons within its corridor. Though most are dry or contain only a modest amount of water, they tell tales of violent storms and ephemeral floods. Driftwood piles hang 60 feet in the air, and rock suspended in mid-fall cling to vertical walls.

One of my favorite washes to walk up is Blacktail Canyon. As the size of the rubble along the wash begins to increase, I feel like I am getting smaller. Sand becomes pebbles, pebbles become boulders. Until I come to a spot where I’m surrounded by the Great Unconformity. The ancient rock walls to either side of me bend and twist upon themselves with such violence they seem to be in motion. Abruptly, this rock formation is cut horizontally and topped with the much younger and more orderly Tapeats Sandstone. 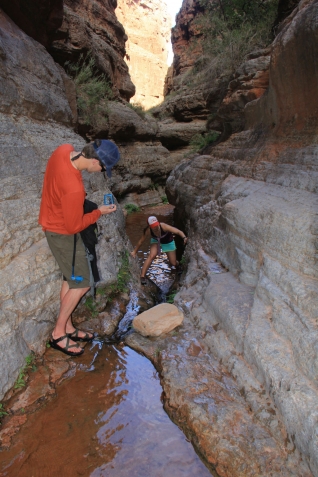 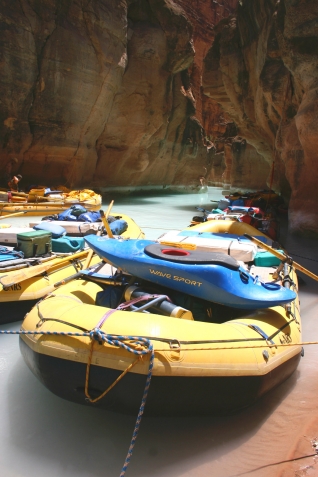 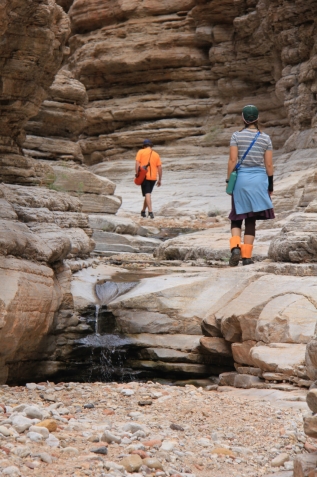 The Grand Canyon is often described as a book placed flat on its side, pages upon pages of geologic history that present themselves with the continuity and sequence of an epic novel. But if it is a book, then it is one with not just pages, but entire chapters missing, millions of years torn from the binding and scattered to the wind. And where one page ends in mid-sentence, another begins with new characters, settings, timeframe, and an entirely different style of language.

And it is the lack of continuity that is the story itself, the fact that we see evidence of mountains higher than the Rockies, eroded down to a plain as flat as the delta, then covered with layers of compressed silt and sand from an ancient sea that existed and disappeared before the dawn of the human race. 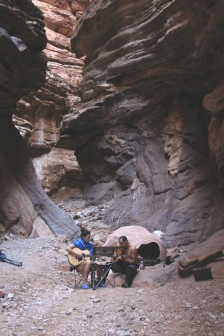 There is an area in Blacktail where the abrupt change in rock layers allows a close inspection of the Great Unconformity. 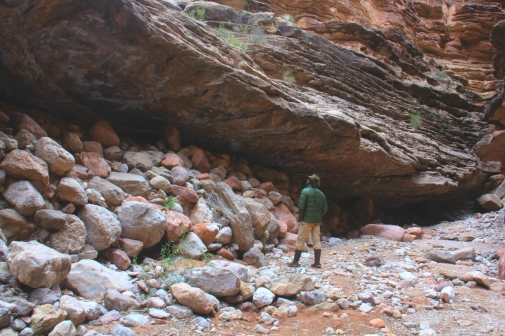 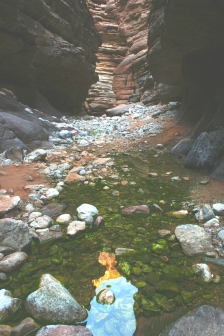 After walking about ten minutes into Blacktail there is a place were a small pool and high ledge create a convenient termination point for the hike. In the protection of the wash, the roar of the river disappears, and the only sound is the slight trickle of water filling a stagnant pool.

It is said that Blacktail is haunted, that people who have tried to sleep in here have been tormented by nightmares, awoken by the chants and drums and rituals of ancient inhabitants. Perhaps, Blacktail is a place where souls can roam from one era to the next. Perhaps it isn’t Blacktail that is haunted but the people themselves. For we are all plagued by our own ghosts, cursed by our own legion of demons.

Either way, Blacktail provides a space without intrusion, where we can, if not understand, at least appreciate the landscape engulfing us. The Grand Canyon offers no secrets on how to preserve our legacy, our deeds, our memories, or even our names. Rather it encourages us to enjoy the time we have, relish it. It teaches us that 100 years is the same as tomorrow, is the same as a moment that is soon to pass or cease to come. 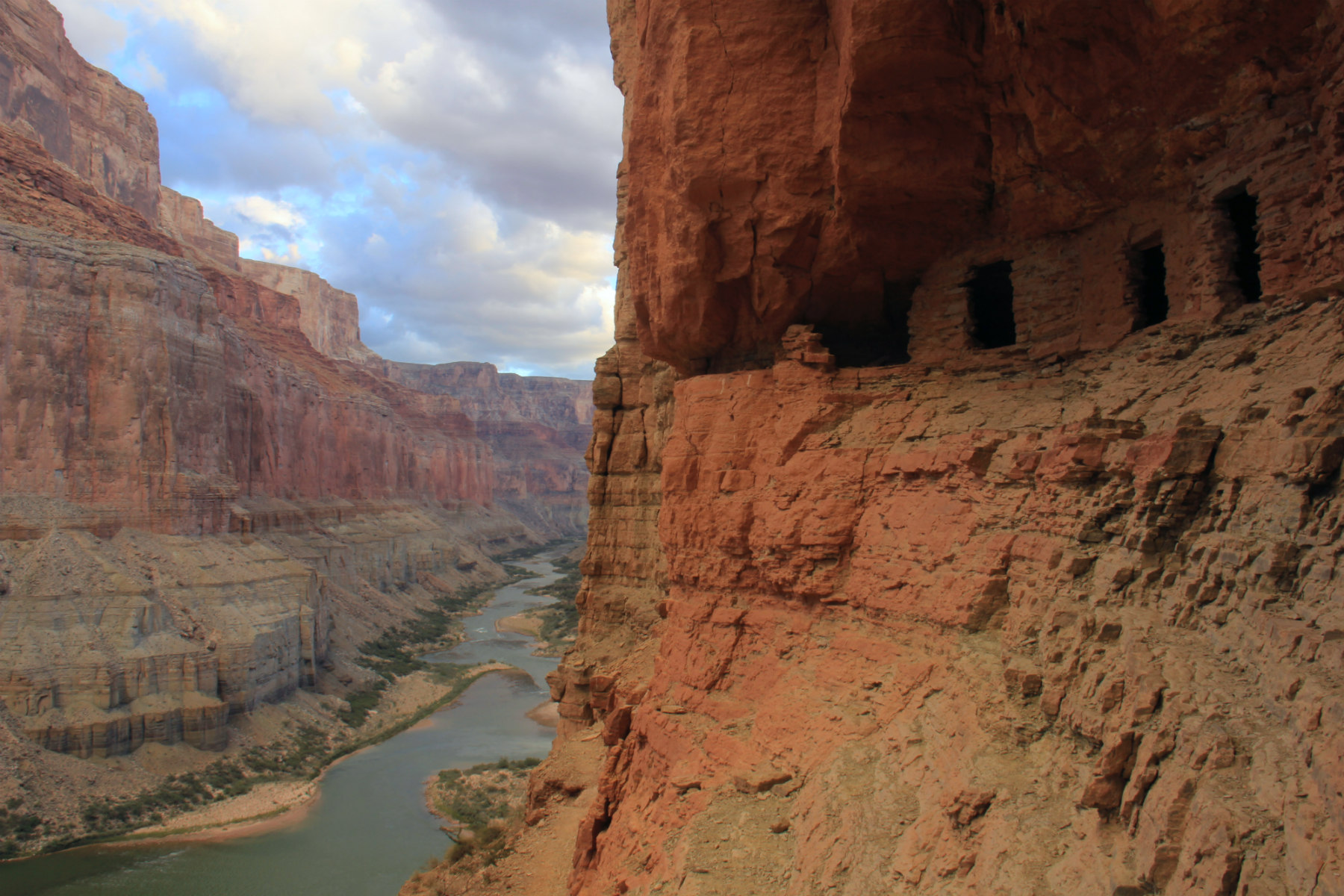 Away from all distractions and indicators of the outside world, I lie down on the gravel and look at the darkening sky framed by the canyon walls. Bats begin to hover and flutter above me, swooping within a couple of feet from my face, no doubt feasting on the bugs drawn to my body, still as a corpse.

Gravity weighs heavy on my breath and my body. I not only feel myself aging but also decaying. My skin draws tight upon my cheekbones. My eyes sink into my sockets. My legs and arms are like phantom limbs. My soul no longer feels trapped in my body, merely floating about its shell.

When we describe feeling dwarfed by the size of the Grand Canyon, it is not rock we are talking about for there are taller mountains, deeper canyons. No, we are humbled by time. And in its immense presence, we feel our own brevity. Time is not lost in the Canyon, rather we are lost in Time. 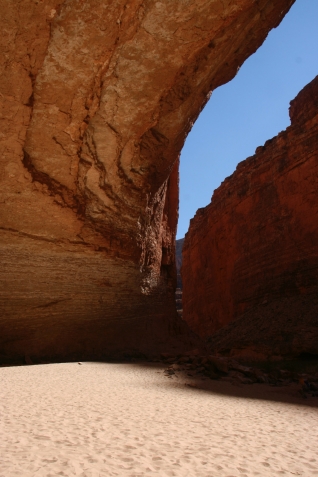 Shadows traveling along rock walls mark the pace of the sun and passing of the day. 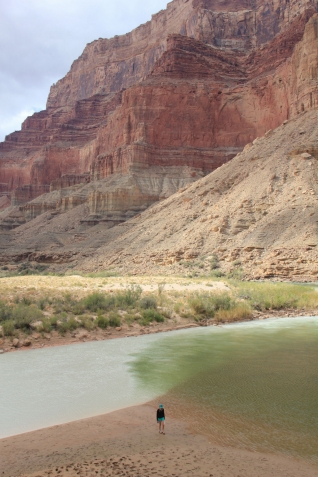 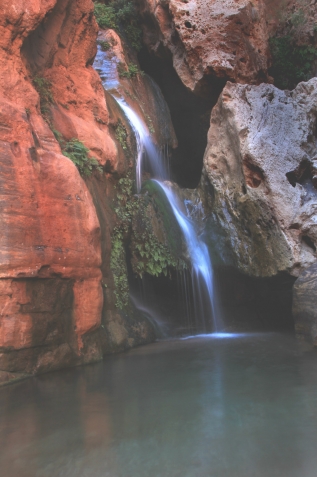 Elves Chasm is a beautiful side hike.