Romania is a country of stunning mountain range landscapes, fascinating history and welcoming locals. But it’s victim to an unfair stereotype. The Irish novelist Bram Stoker cursed the country when he wrote the novel Dracula in 1897. Stoker never visited Romania. In fact, it’s believed that Stoker actually drew inspiration for the novel’s dark and spooky castle from the English coastal town of Whitby.

Stoker never experienced a wild Romanian river or stared up at ancient old-growth forests dappled in bright spring sunshine or watched a golden eagle soaring above a deep canyon. He never enjoyed the warm welcome from the locals or felt the warmth of a shot of Romania’s plumb liquor, tzuika. His book did a massive disservice to a country that should be recognized first for its stunning wilderness, captivating culture, local hospitality and awesome whitewater, and not for some blood-thirsty fictional book character.

I explored this under-the-radar paddling destination during the 2019 Balkan Rivers Tour, and if you’re a kayaker looking for uncrowded whitewater plus culture, take these steps to follow my journey.

Step 1 – Get to Romania
Fly into Bucharest. Most European international airports offer daily direct flights. (Pro tip: look into discount airlines for cheaper options.) Flying with a boat? Take some time to plan ahead. Hire a car or van to carry gear, friends and boats and arrange for roof racks, which are available at some airport car rental agencies. Bringing your own inflatable roof racks can avoid boat transport drama.

Step 2 – Get to know Romania
The area of Romania is about 92,000 square miles—roughly twice the size of Pennsylvania—making it the 12th largest country and 7th most populous in all the EU member states with almost 20 million inhabitants. Five countries border current-day Romania: Ukraine to the north, Moldova to the east, Bulgaria to the south, and Serbia and Hungary to the west. Historically, this geographic placement between Christian-ruled Europe and the Muslim-ruled Ottoman Empire meant the country was constantly exposed to invasion and war. You’ll notice this blend of cultures in the architecture, taste it in the food and explore it through the country’s rich history.

But what sets Romania apart from neighboring countries is its wilderness. The Carpathian Mountains, dense old-growth forests of Transylvania, and wild rivers make it a country like no other in the EU. Peppered amongst the wild landscape are medieval villages, historic sites and fortified churches. For dirtbag kayakers keen on exploration on and off the river, Romania provides. 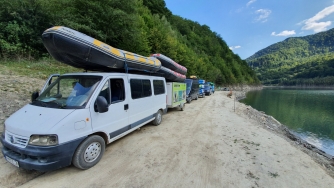 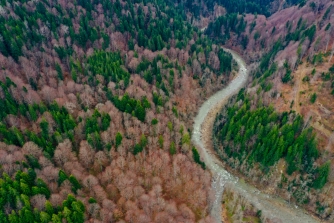 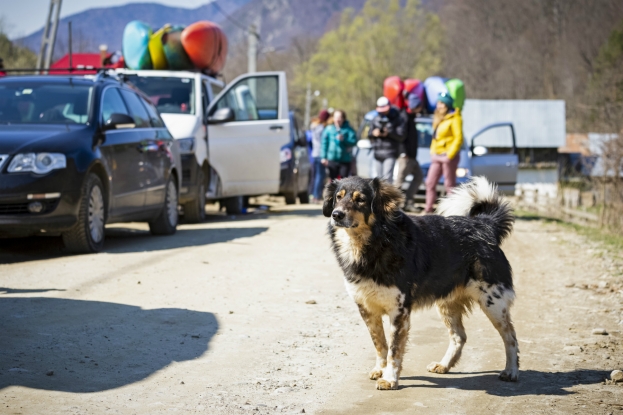 Step 3 – Explore Bucharest
Even if you aren’t a city person, it’s worth spending a couple of days in the capital city for a taste of Romanian food and culture before heading out in search of rivers. During the day, wander the narrow, cobblestone streets of the old town, and take in the unique mixture of century-old buildings, communist architecture and modern high rises. The city is known for it’s massive Communist-era palace of parliament, Palatul Parlamentului, which is a panoramic site to see and has three museums inside—the National Museum of Contemporary Art, the Museum of Communist-Totalitarianism and the Museum of the Palace. It remains the present-day national government building and is the world’s heaviest building, with 4.4 million tons of brick and stone used during its construction which took 13 years (1984–1997). Built by the dictator and former Romanian President Nicolae Ceaușescu the building stands as a reminder of the nation’s tumultuous past. Additionally, tourist agencies offer every imaginable kind of tour–from walking food tours, to castle tours, beer tours.

Step 4 – Explore Bucharest at night
Bucharest’s old city has plenty of bars, cafes, hotels and hostels and the city is home to a vibrant nightclub scene, making it a popular destination for backpacking tourism. There are hostels galore, in and out of center town/the party district. Puzzle Hostel is an affordable option with dorms or private rooms and a cozy underground den with a kitchen, washing machine and foosball. Plus they offer a free basic breakfast to guests. Pura Vida Sky Bar & Hostel is an above ground option with an onsite sky bar with a killer view of the city. They offer a free glass of wine in the evening and a free cup of coffee in the morning. (Can we call that breakfast and dinner?)

Taste some Romanian history by sampling traditional food, like beef goulash (stew), bluz (roasted polenta balls with cheese), or a sour beef-tripe soup, a staple at Romanian family dinners. Pastry stands are sprinkled throughout the city, where you can try traditional Romanian pastries like Plăcintă, round or square pastry cake filled with apples and young cheese. From bakeries to breweries to medieval churches and parliament palaces, the best places to tour and worship are outside of the sprawling city limits.

Step 5 – Get to the River(s)
On the 3.5 hour drive north from Bucharest, the forests, mountains and rivers of Transylvania will take you back in time. Exploring and paddling in the Transylvania and Wallachia regions of Romania the southern Carpathian Mountains are visible to the east and south and rise some 1000-2,500-meters high, skirted by virgin forests and wild streams—a playground for paddling adventures.

Set a basecamp at Camp Green or New Old Village, both locations just outside the village of Vadu Oii. These two camps offer cabins, camping, a restaurant and bar and are within an hour driving radius of three great kayaking rivers: the Bâsca Mare, Bâsca Mică and Buzău rivers. 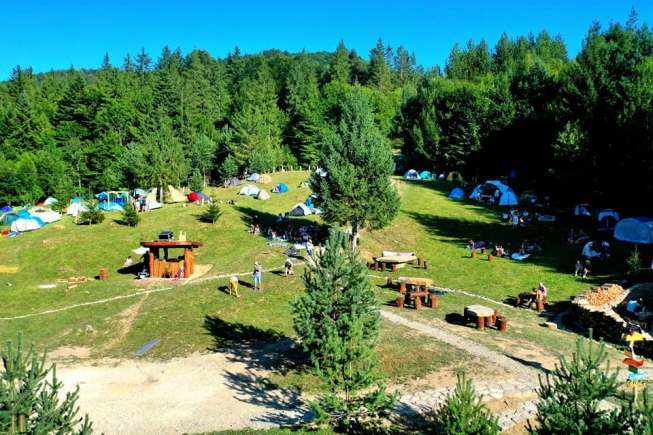 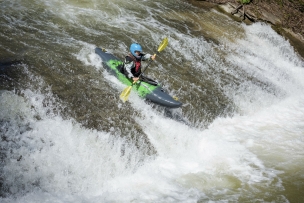 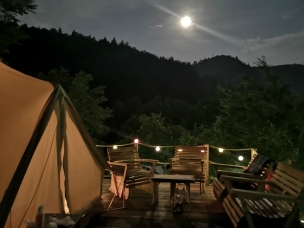 A fairy-tale night at Camp Green.

Camp Green is co-owned by kayaker and dedicated river defender Catalin Campeanu, who can pass on details about put in, take outs and even provide shuttle service. He organizes Vadoo Chill Fest, a busy music festival in August, and this year his adventure tourism agency Green Adventures together with Camp Green organized a conservation event called Save the Basca Mare, gathering kayakers and locals to keep illegal and unnecessary hydro dams off the Bâsca Mare.

Solid snowpacks in the southern Carpathians combined with rising spring temperatures of the temperate-continental climate make it the ideal season for paddling. Autumn can also have good water levels, but are rain-dependent and thus less consistent. The Bâsca drainage basin has an area of 300 square miles, cutting through sandstone and conglomerate formations creating some exciting runs.

Step 6 – Get on the Rivers
Bâsca Mare means ‘big’ Bâsca and is a river with a range of features and rapids of varied difficulty (class II-IV+). Some steep sections feature boulder gardens and steep creeking, while in other places the river opens up with some solid class IV rapids at high flows. The upper canyon is technically less difficult than the lower canyon, and paddlers should take care to scout rapids because siphons and undercuts are plentiful. A broken weir about 1-2 kilmeters upstream of the confluence with the Bâsca Mică (also the take out), has crumbled into a dangerous siphon and should be avoided at all water levels.

Balkan Rivers Tour 4 visited Romania in the spring of 2019 to raise awareness about the destruction of the Bâsca Mare, as a government-run company is currently building an illegal dam on the river, which would divert it into a 20-kilometer pipe to supply the poorly designed Siriului Reservoir and dry out the Bâsca Mare completely. By visiting, kayaking and supporting local businesses, kayakers can help keep the river wild showing decision makers that their river is special and people will travel to enjoy it. 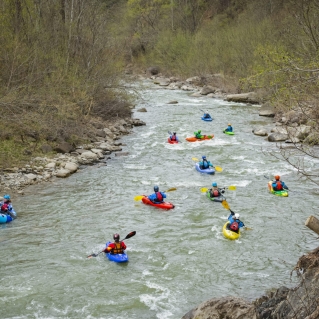 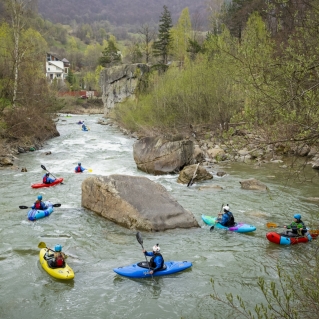 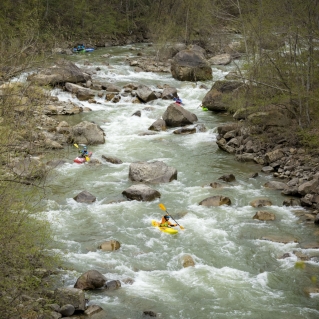 Bâsca Mică means ‘small’ Bâsca and runs through a parallel, less steep valley to the Bâsca Mare. A dirt road runs beside the river for its entirety, making car scouting easy and allowing paddlers to choose how far up the river they would like to start. This river host tons of slides and makes for a playful section to paddle. It meets the Bâsca Mare river in the village of Varlaam, marked by an impressive pillar rock formation.

The Buzău River is known for its commercial rafting but is a dam release river, so knowledge of release times are essential. Just a 30-minute drive from Camp Green, the put-in is basically where the water is returned to the river after turning turbines within a run-of-the-river hydropower plant. Over the course of the 9-kilometer rafting section, expect wave trains and watch out for a few drops (up to six-feet high). The Buzău is not a particularly technical river (class II-III+), but has some challenging rapids with easy scouting options.

Romania is a land of proud people, who have withstood constant invasion and occupation. They proudly display their horses and carriages to curious kayakers passing by, displaying honor and class that’s hard to find in modern Europe. But with the country’s recent acceptance into the EU, another type of invasion threatens the people and landscapes of Romania: illegal clear-cut logging of ancient forests.

Take caution driving as massive transport trucks rumble past burdened with gigantic logs that predate the castles of Romania. As corporations turn wild forests into ‘organic’ firewood for Germany and Austria, wild bears, boars, wolves, deer and lynx are losing their habitats. It’s a sad reminder of how green trends–like hydropower–can lead to rampant destruction to the last wild pockets of the world.

Step 7 – Get off the Beaten Path
Take some time off the water to explore the historic city of Brașov (a two-hour drive from Camp Green), known for its medieval Saxon history and architecture including the towering Gothic-style Black Church. Continue from there to the walled town of Sigisora (three hours farther), an ancient town and historic trading post. Each Romanian town will have its own rich history from the days of the Soviet Block, Romans, Hungarians and Ottomans. Skip the crowds (and the Dracula associations) at Bram Castle, and check out one of hundreds of other castles peppered throughout the country.

Don’t come to Romania looking for anything Dracula-related. Come looking for awesome whitewater, wild forests, amazing people and a landscape not from a horror novel, but from a fairy tale.