Like most river-runners, I have a love-hate relationship with rocks. In the river, rocks are usually dangerous objects to be avoided. But they also create the rapids that give rivers their personalities; and they are the art that frames the canyons. In camp, they are essential tools to pound in tent stakes, secure rafts to shore, and win rock-skipping contests. You can’t be a river runner without getting at least a little curious about the billion-year-old layers of rock you float past and the billion-year-old histories they encapsulate. 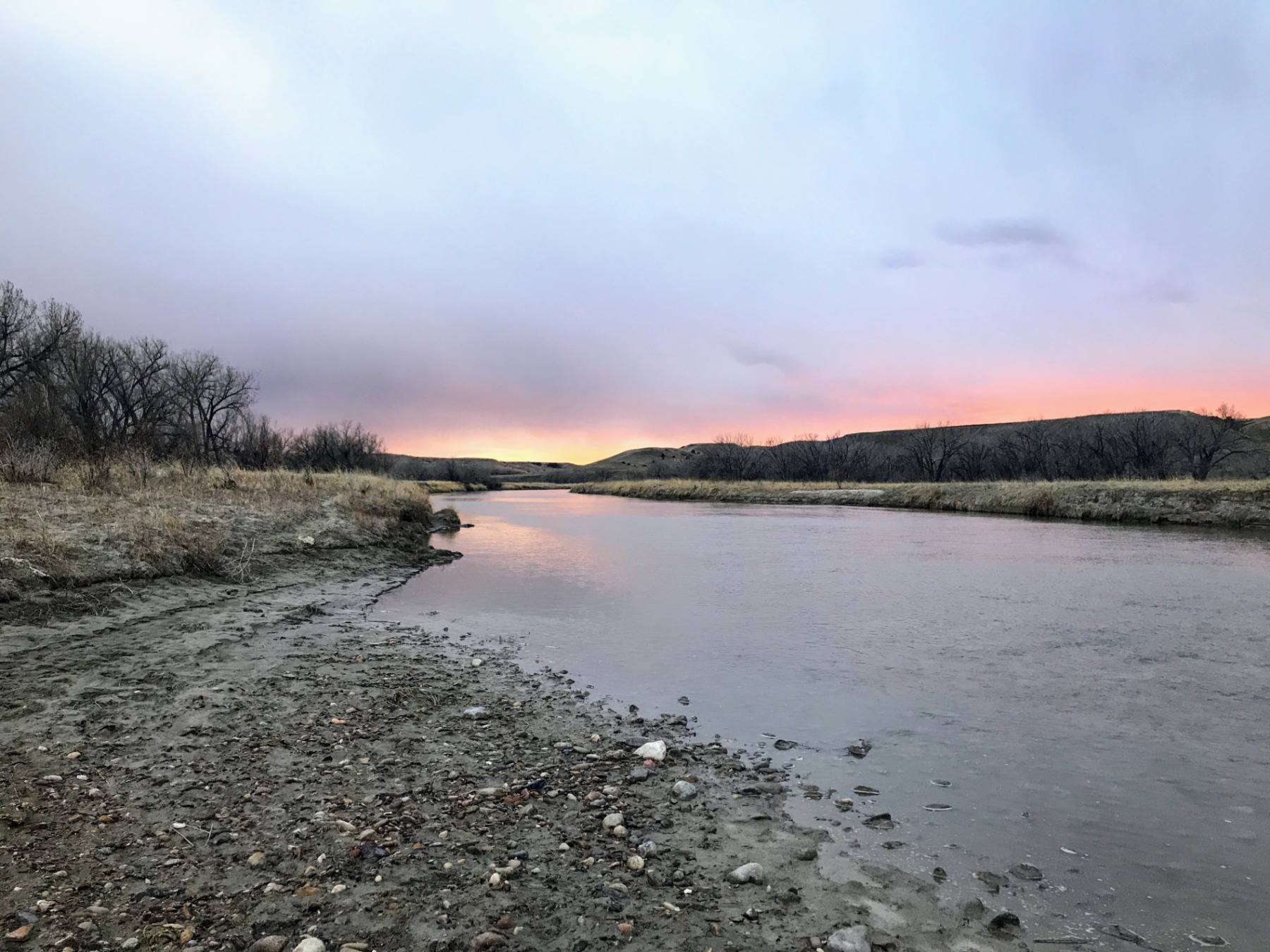 I have, at various times, threatened to go back to school for a geology degree. My wife laughs each time I do.

I suppose I could remind her that geologists like ‘em old, but I don’t bother. My interest in geology is not really scientific. I don’t need to know anything about “linear seismic inversion.”  I just want the basics: What kind of rock is that?  Why does it look like that? How was it made? How old is it?  To this end, I’ve dabbled. I’ve read a few things (mostly just the geology section) of already thin river guidebooks). Any time I have delved deeper, however, the magic always slips into math, which is where I stop. For me any sort of education requires a carrot or a stick or, as I found out this spring, an agate. 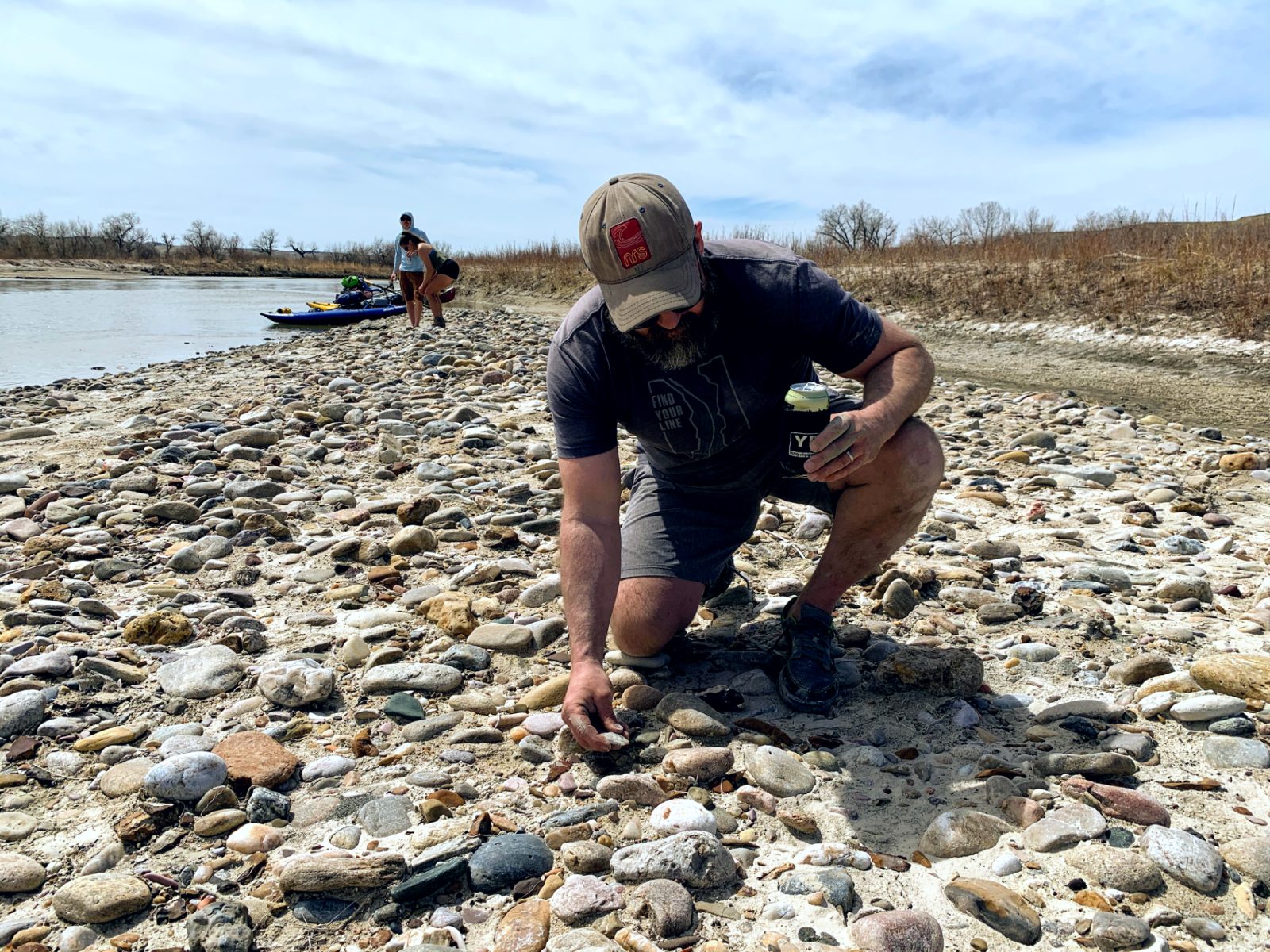 In February, our usual rafting crew celebrated the unexpected good fortune of securing four prime season permits on western rivers. But, as the pandemic began to unfold over the coming months, our celebration turned to lamentation. For weeks, the anticipation of an April 25th Montana Smith River launch was a beacon of hope at the end of a long, hard winter. We pulled rafts from storage and inflated. Organized kitchen boxes. Propane tanks were filled and trailer tires topped off. For a while, the trip seemed likely. Then possible. Then pretty unlikely. Then canceled. There is no heartbreak quite like that of anticipation dashed.

So, all dressed up and nowhere to go, our South Dakota crew—all taking quarantining and self-isolation very seriously, decided to stay closer to home and take advantage of spring flows and float the Cheyenne River. 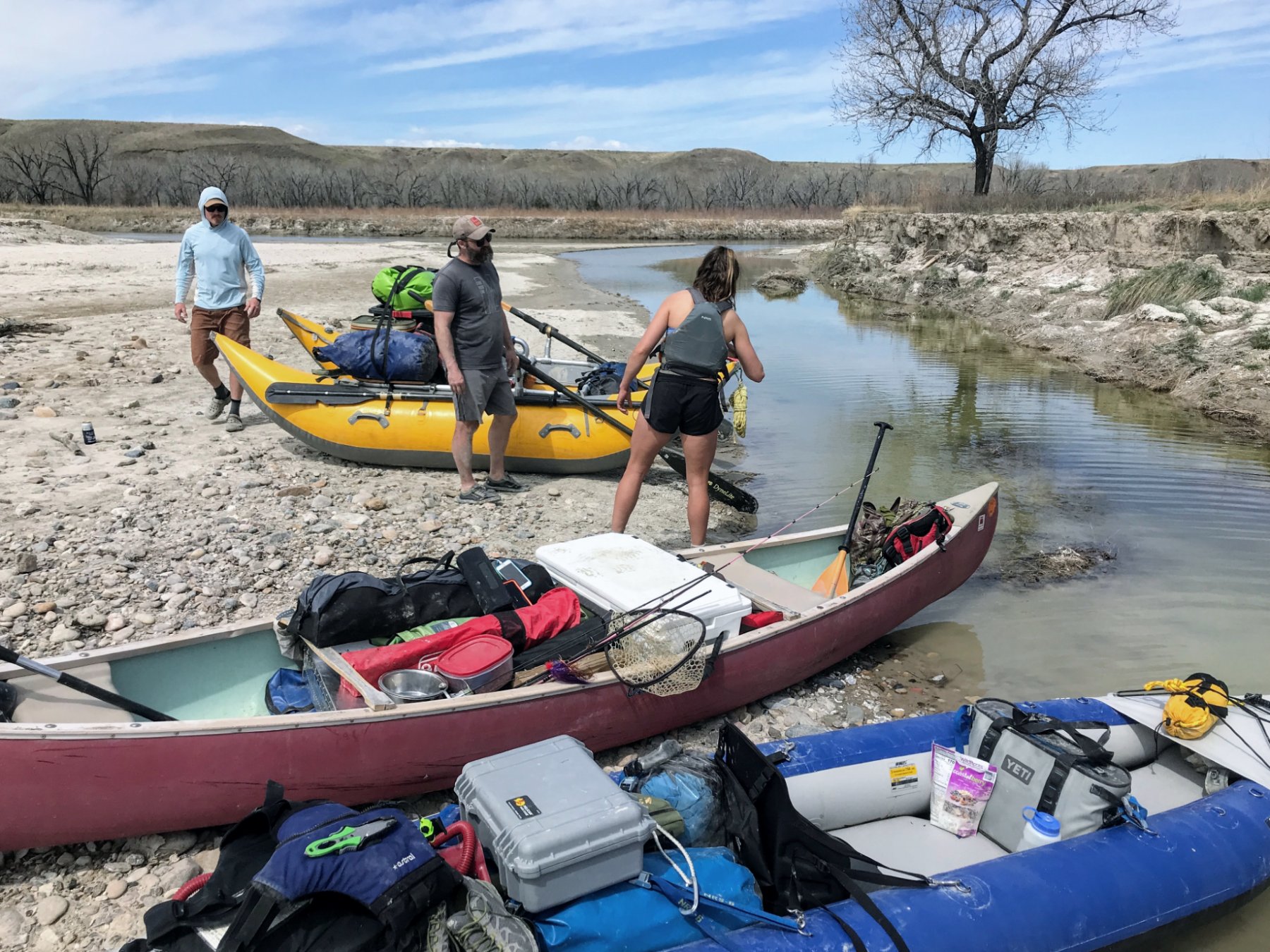 We finally arrived at a bridge over the Cheyenne on Friday afternoon and set up to launch. The day was breezy and in the high 50s, the cottonwoods and willows along the river had yet to sprout leaves, and last year’s dried grass still buried the fresh green grass of spring. But, the meadowlarks sang loudly, and migrating waterfowl littered the river, and for all this, it felt like spring, which is more of an attitude than a season anyway.

Eric had an inflatable kayak, Andy and Sarah were in a 16’ canoe, and I was in an Aire Wave Destroyer cataraft. Perhaps overkill for water that doesn’t exceed Class II, but it sure can haul a lot of gear. The flows were a little on the low side, which meant we had to choose our channels carefully or risk running aground. The low water also meant that the river shore was miles of sand, gravel, and cobble, a fact that would become fortuitous later in the trip.

After a few hours of floating on Friday afternoon and a brief spat of rain, we set up camp at the confluence of the Cheyenne and several draws that drain the Southern Unit of Badlands National Park. We built a fire, cooked dinner, pitched tents and told stories before slowly growing hushed to watch the stars come out amidst the songs of distant coyotes and wild turkeys. If you’ve never seen the milky way on a clear night on the South Dakota prairie, you’re missing out. 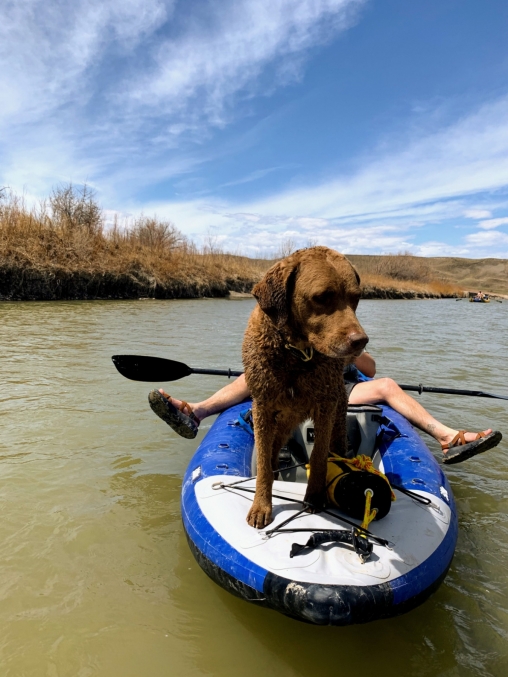 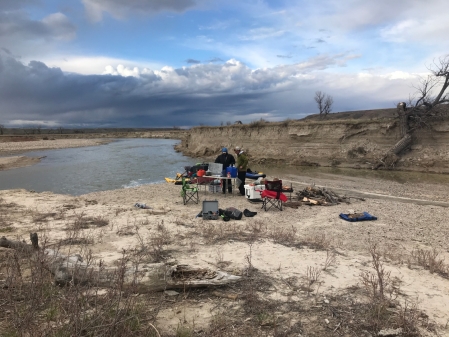 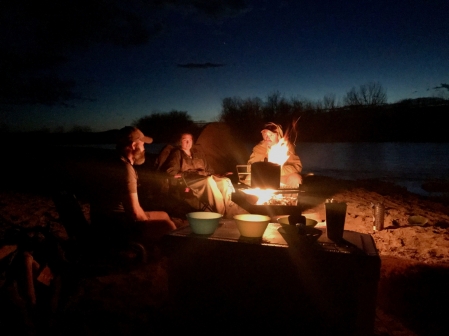 The next morning frost covered the tents, but the sky was clear and the forecast was good. We climbed a nearby hill to take in the sweep of land. This particular stretch of the river runs through the Buffalo Gap National Grassland with intermittent private ranchland. The landscape is cottonwood groves along the river, juniper stands in the river breaks, all framed by the mottled edges of badland buttes.

Early afternoon on Saturday, the wind started to be a problem. Our original plan was to float from Red Shirt to Wasta, a trip of 50+ miles. But, the wind was ripping directly upstream, and progress was slow and laborious, especially in the cataraft. A few times, if you stopped forward-rowing, you started going backward. Exhausted from five hours trying to make progress in a 20 MPH headwind, we began to look for a good place to camp, a spot sheltered from the wind. We pulled into Indian Creek, which was behind a steep bluff, a reprieve from the blasting wind. 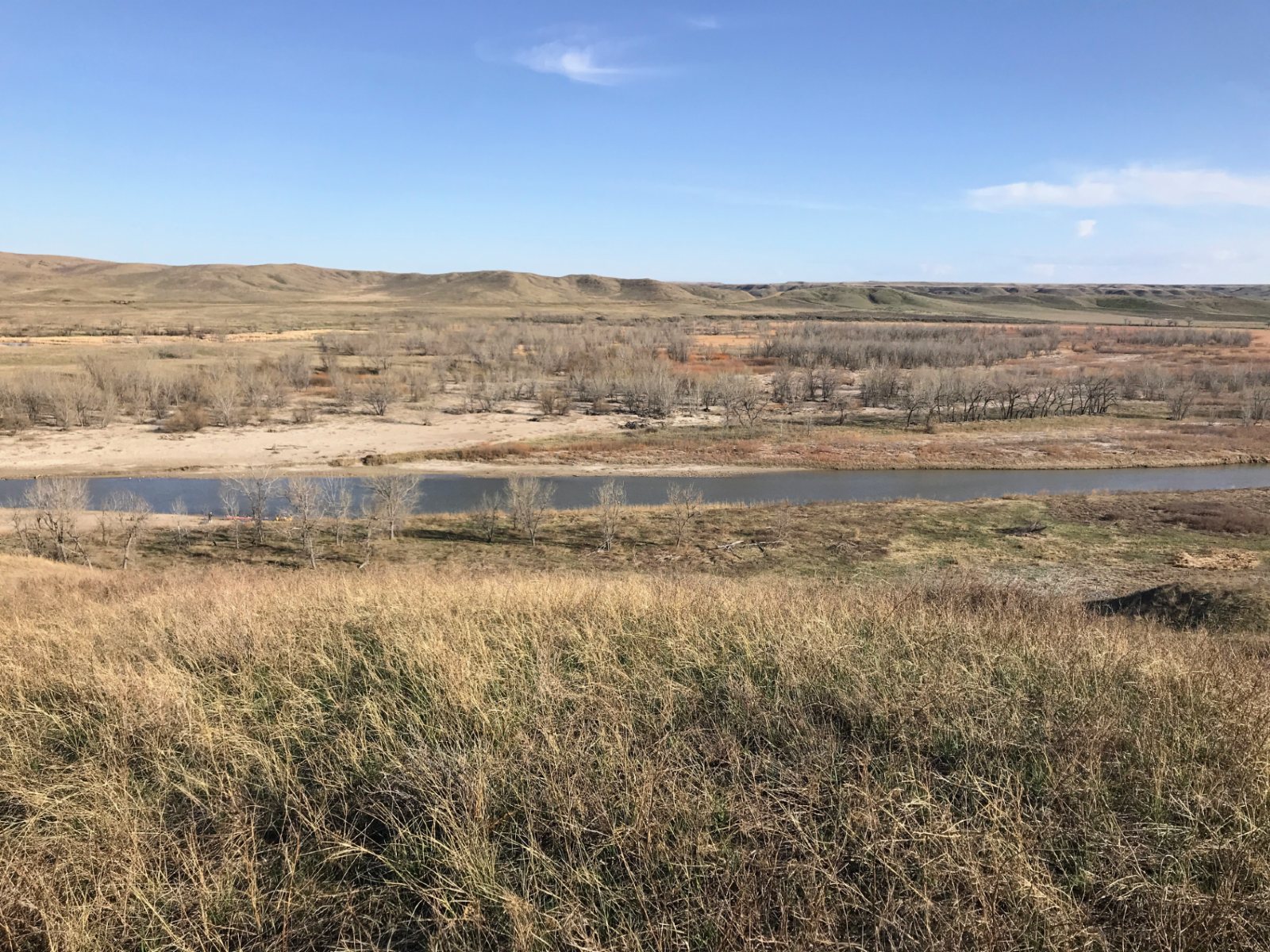 As we pulled in, shockingly (and serendipitously) we met two men hiking along the bank. We were truly out in the middle of nowhere, so they were about as surprised to see us as we were to see them. One man wore camouflage neoprene bib waders, a full beard, a lip piercing, and a 12-inch knife strapped to his chest. I’m not going to lie, it was a bit like that scene from Deliverance. But the guys were super nice, and we asked them what the hell they were doing out there. Looking for Fairburn Agates, they explained.

“Did you find one?” we asked. They did, and they showed us a small cream-colored rock banded with stunning and perfectly formed deep red and yellow striations. “I just collect them, but you could get about a thousand bucks for this rock.”

I just about dropped the small rock.

This set off a chain of “one-upping” stories between the two men. It was hot, and they’d been walking in the sun all day, so we offered them cold beers while they educated us. The stories culminated with the tale of the Harley Davidson Agate—an agate so large and beautiful that someone traded it straight across for a $30,000 Harley Davidson Motorcycle. They explained that you could collect agates for your own collection from the Buffalo Gap National Grasslands but not commercially. 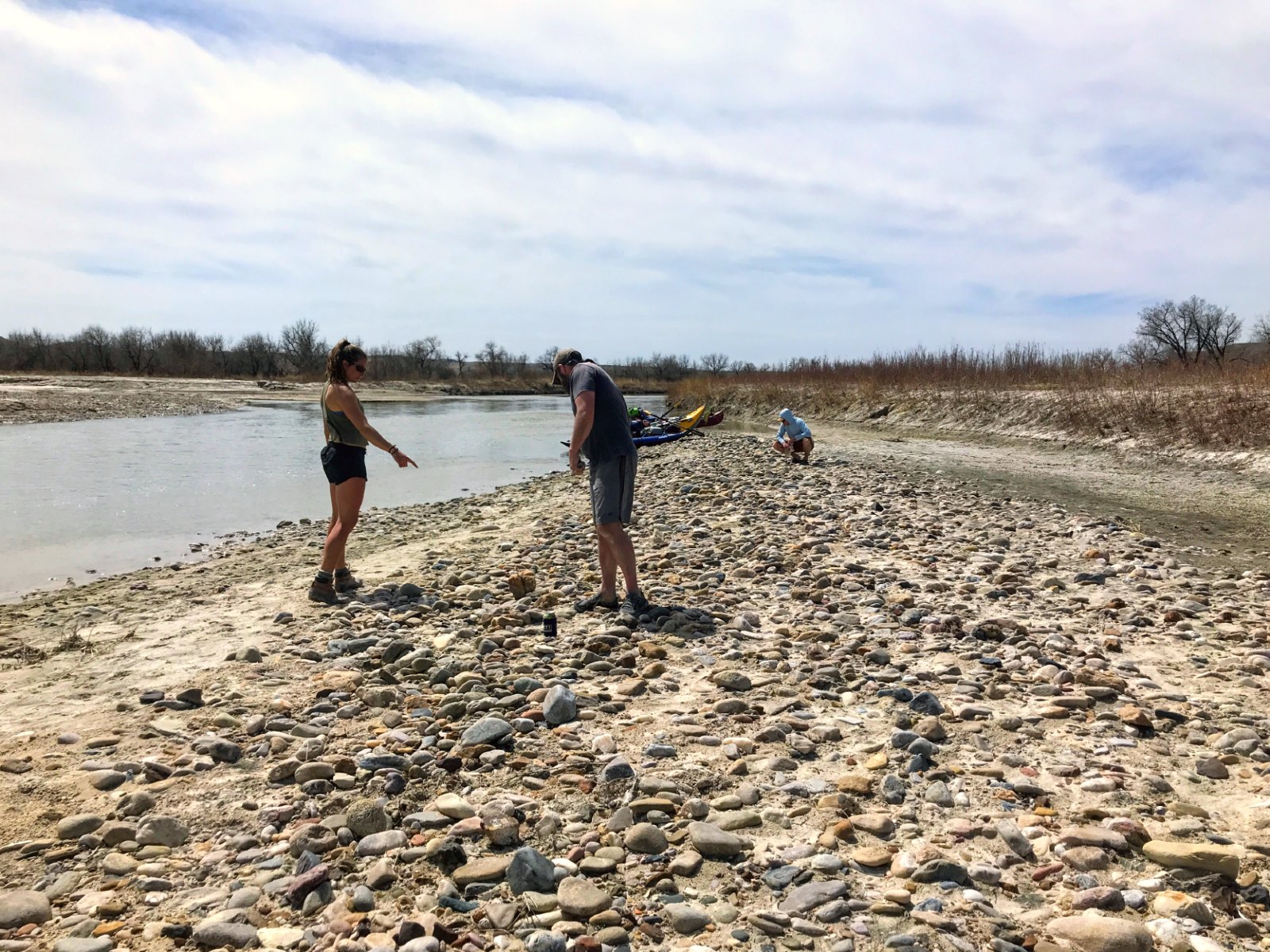 We asked about how to find them. And they talked about finding the right host stones. We asked where we could find them. And they said everywhere. The important thing was looking. They said. Really looking. Down-on-your-hands-and-knees looking. Sometimes they hunted at night, so they could just see what was in their headlamp glow and not get distracted. They told us that splashing a little water on the rocks would help bring out the color of the stones.

Sarah absolutely had to be at work by 2:00 p.m. on Monday, and so, at some point in the day, we abridged our plan to float to Wasta and instead, chose a take out twenty miles closer at Highway 44. This itinerary change gave us some unplanned free time, which is exactly what we were looking for on this trip anyway. Why rush? Let’s just slow down. Enjoy the outdoors after working from home and recreating at home and just being home for so long.

Ten minutes after the unexpected rock hounds had waded across the river and disappeared, all four of us had dropped to our hands and knees to pick up rocks, looking—we joked—for the “Retirement Agate.” This was our posture for a good part of the rest of the trip. We stopped at every gravel bar and scoured our next camp. 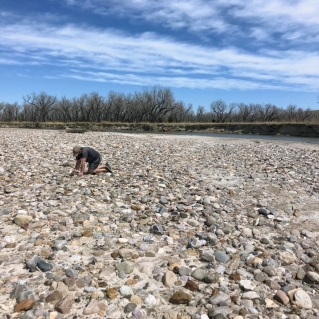 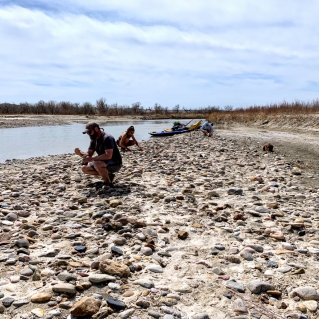 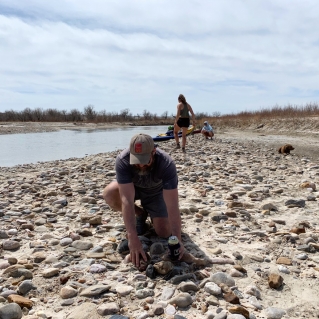 Had we any cell phone service we all would’ve become Fairburn Agate experts. We would’ve learned that the Fairburn Agate is a semi-precious stone formed in sedimentary limestone. It’s composed of concentric layers of cryptocrystalline chalcedony and colorized by different trace minerals. Furthermore, we would’ve learned that Fairburns are unique because of a process called “fortification,” in which the concentric bands have sharp “jags” rather than the smooth curves of other agates. But we didn’t learn any of that on the river, because there is no cell service on the Cheyenne in the middle of rural South Dakota. And it was just as well.

Instead, we became kids again, flying kites, inspecting animal tracks, playing frisbee, drinking beer, trying to catch catfish, sunbathing on sandy beaches, swimming in the muddy river, cooking over a fire. And picking up and inspecting pretty rocks along the river and showing them to our friends, which was all pretty rare and precious, too. 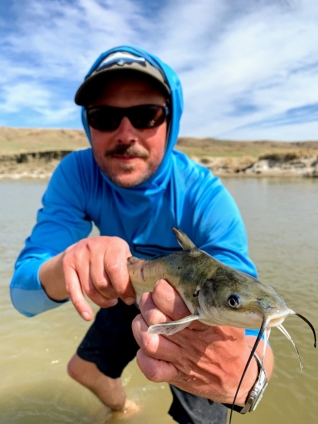 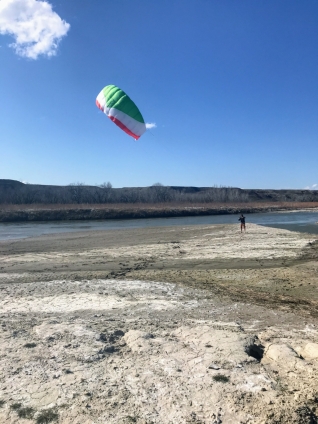 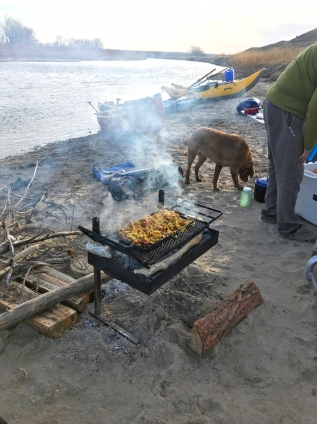 Over the course of the trip, we picked up a thousand rocks—none of them were Fairburn Agates. One may have been a “Baby Fairburn” or maybe a chert—several internet forums are presently debating that question—although all of them were interesting.

Sometimes river runners get so fixated on the world-class western rivers and winning the permit lottery that we lose sight of why we float down rivers in the first place. In the end, whether it’s rivers or rocks, to find something truly precious, sometimes you need to slow down and focus on what’s right in front of you.