Soft morning light bathes the streets of Jaen, Peru in a warm orange and a tall man ducks through the too-short door of a hostel. He gives the impression he’s a local as he pads down the bustling street in flip-flops and a faded tee, but his 6’3” stature, fair skin, and dusty blonde hair give him away. He casually greets friends on the street, saunters up to the nearest food cart and orders in fluent Spanish. After he eats, he sits down at the desk in his rudimentary hostel room and opens his computer. 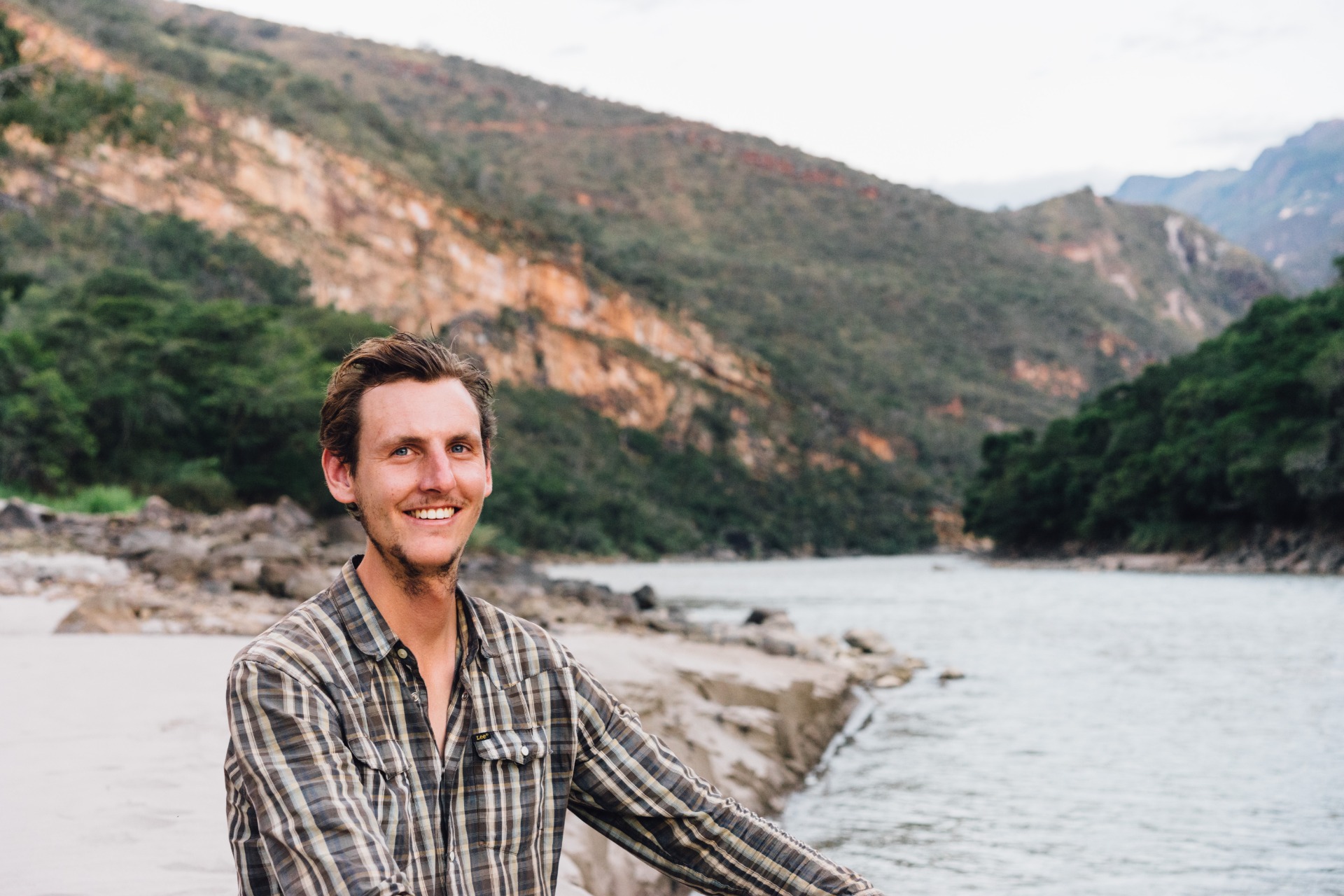 Ben Webb came to Peru six years ago because of one river: the Marañón. The Aussie kayaker traveled halfway around the world not just to kayak, but to help protect the headwaters of the Amazon. Today, Ben is part of a small but dedicated group of river defenders. Ironically, that means he spends a lot of time far from the impressive rivers that snake through the Andes, his days in front of a computer screen in busy cities helping keep Peru’s rivers from being dammed, diverted or flooded. He’s not just paddling, he’s paddling with purpose.

Ben’s path to Peru was a meandering one. It started with an old fiberglass canoe and some river trips with his dad. “When I was a kid, Dad bought a big old fiberglass canoe and a kayak and we would go and run some class II whitewater on the Yarra River,” Webb says. “I was 10 years old and the grade II river looked massive! I would ask Dad, are we really gonna run that?!” After a few trips with his dad, Ben was hooked, and he quickly learned where a boat and paddle can take you—all the adventures (and misadventures) with friends and that same fiberglass canoe in his ‘backyard’ beyond the city limits of Melbourne.

When he got in a plastic boat for the first time it was with the Melbourne University Mountaineering Club. The club introduced him to the basics of kayaking through some mellow surfing and sliding on the Goulburn River. “In uni I was learning more about kayaking than I was about engineering,” he says. “I found a cool group and we had a lot of fun going out camping and kayaking on weekends. The sport kind of grew on me from there.” 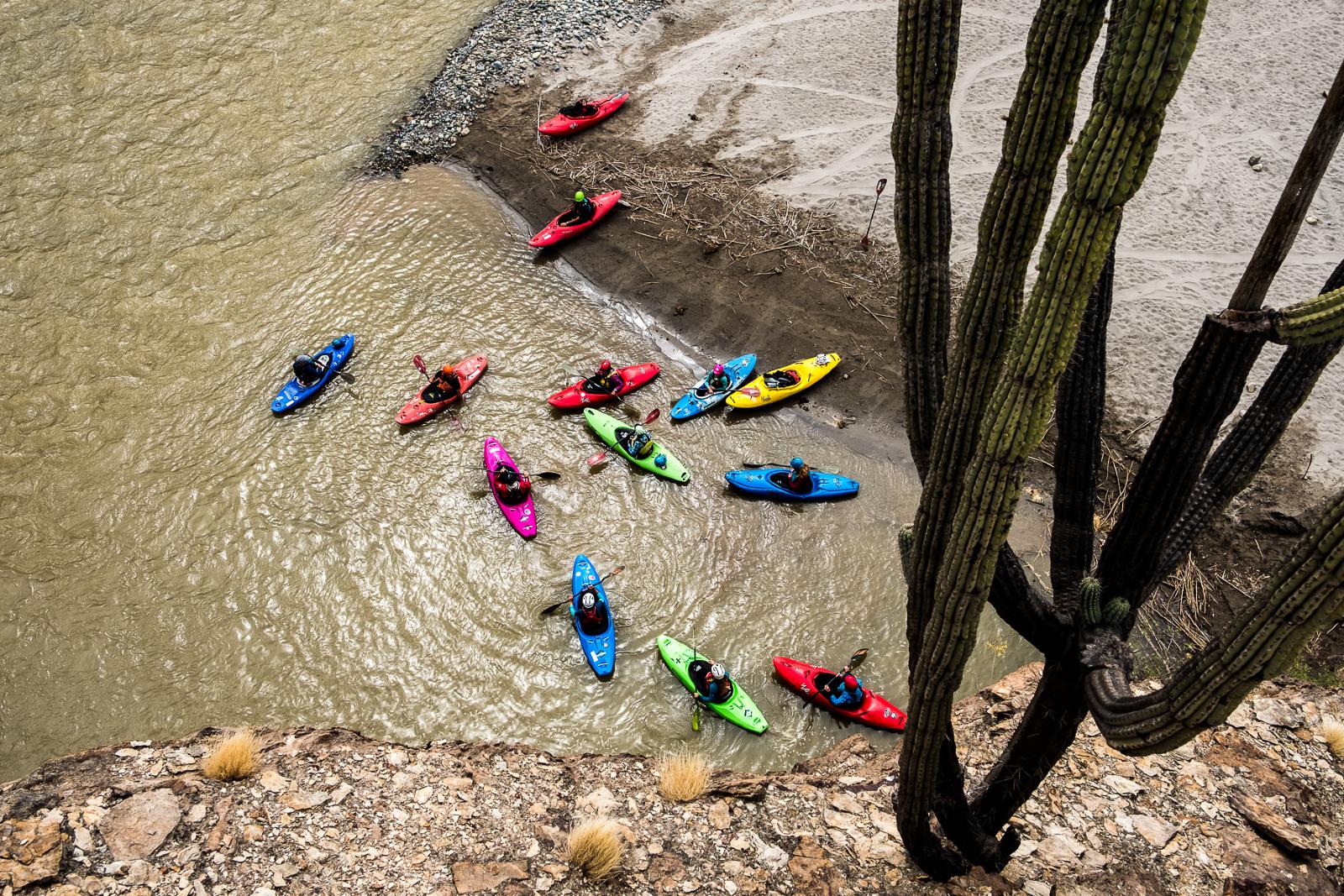 Ben paddled all over Australia, where his trajectory into river conservation continued. “Kayaking and rivers became important to me; great times with friends appreciating the wilderness,” he says. And one trip specifically—exploring and paddling the Dennison River and Franklin River in Tasmania—inspired him to create his project to take action and contribute to the protection and preservation of rivers.

“On the Denison, you get into this valley and it’s a prehistoric wonderland with thousand-year-old huon pine trees, some of the only stands that remain in the world.” It was paddling through this World Heritage Site and part of the Franklin Gordon Wild Rivers National Park that Ben learned more about the history of river conservation. There he read some deeply inspiring words from those who took part in the Franklin River Blockage of 1983, one of the largest river conservation protests in history. Because they were successful in protecting the river from being dammed, Ben and his friends were now able to enjoy the canyon. “It was the most amazing ecosystem I had seen up until that point in my life,” Webb says. “And I thought, what could I do with my time that would be more useful and more important than protecting an area like this?”

After graduating in 2011, it only took Ben one day to realize that a career as an engineer wasn’t for him. With lots of free time in the office, Ben spent a lot of time Googling. This is how he found the Marañón. It wasn’t long before he was on the road with his kayak.

First, Ben spent some time on the technical rivers of neighboring New Zealand, then traveled solo to Chile in 2014. “I bought a little van and drove around for six months before selling the van and bussing up to Peru to paddle rivers like the Colca, the Cotahuasi, and the Marañón.” His trip sparked a love for adventures in Latin America, but he wanted to do something more than just travel and kayak. “When I learned more about the Marañón, I was like, this sounds like a pretty damn important river, maybe there is something I can do to help there?” So, Ben dreamed up a conservation project, named it Paddling with Purpose, and did some fundraising. Then, he quit his job and went to the Marañón.

The Marañón flows more than a thousand miles, drawing an upsidedown L from the eastern base of the Andes near Lima. Flowing north toward the Ecuador border, it cuts through tropical dry forests lined with cacti before merging with the Ucayali River and the Amazon Basin. It’s home to ancient indigenous tribes who have depended on the river for centuries and fauna and flora yet to be discovered by scientists.

As Ben paddled and learned more about the Marañón, he also learned about threats to the river, including plans to build 20 massive hydro dams. The Chadin II and Veracruz dams alone would inundate over 7,000 square kilometers, putting uncounted endemic species in peril and displacing indigenous people. The dams also put Peru’s natural heritage at risk, flooding many ancient pictographs and sacred sites.

Paddling with Purpose was born first from a desire to show locals their home river, before it was destroyed, which was expected to happen within that year. “My thinking was, if I take these young Peruvians down the river, at least there would be some living memory of their river.” 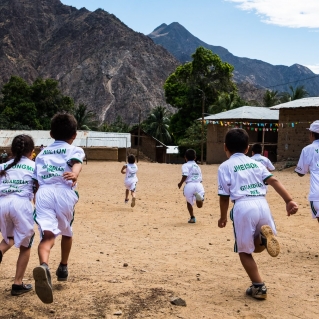 Local kids who live along the Marañón River. 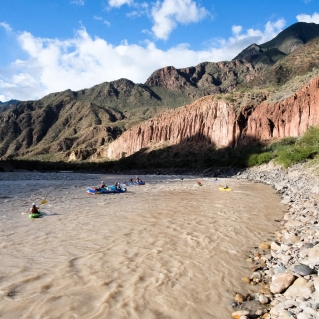 Sacred sites on the Marañón.

As Ben met more people and Paddling with Purpose took shape, the plans to start construction on the dams started to slow. “Things just started to balloon. First someone wanted to make a movie, then someone wanted to start a campaign, people started getting involved, some Peruvian, some international.” Due largely to the connections and friendships Webb made in the riverside villages, the project morphed into an NGO, Marañón Waterkeeper (MWK). Today, MWK is part of the international river conservation collective, Waterkeeper Alliance.

Ben is part of a strong team comprised of fellow activists, like Peruvians Bruno Monteferri and Luigi Marmanillo, MWK’s Supervising Director and National Coordinator respectively. Bruno is an environmental lawyer, while Luigi has a background in tourism. Together, with Ben and many groups of dedicated locals, they are defending the Marañón working from the communities to the courtrooms. Their projects include Remando Juntos, a community-based outreach campaign aimed to educate and spread awareness about the importance of the Marañón River. 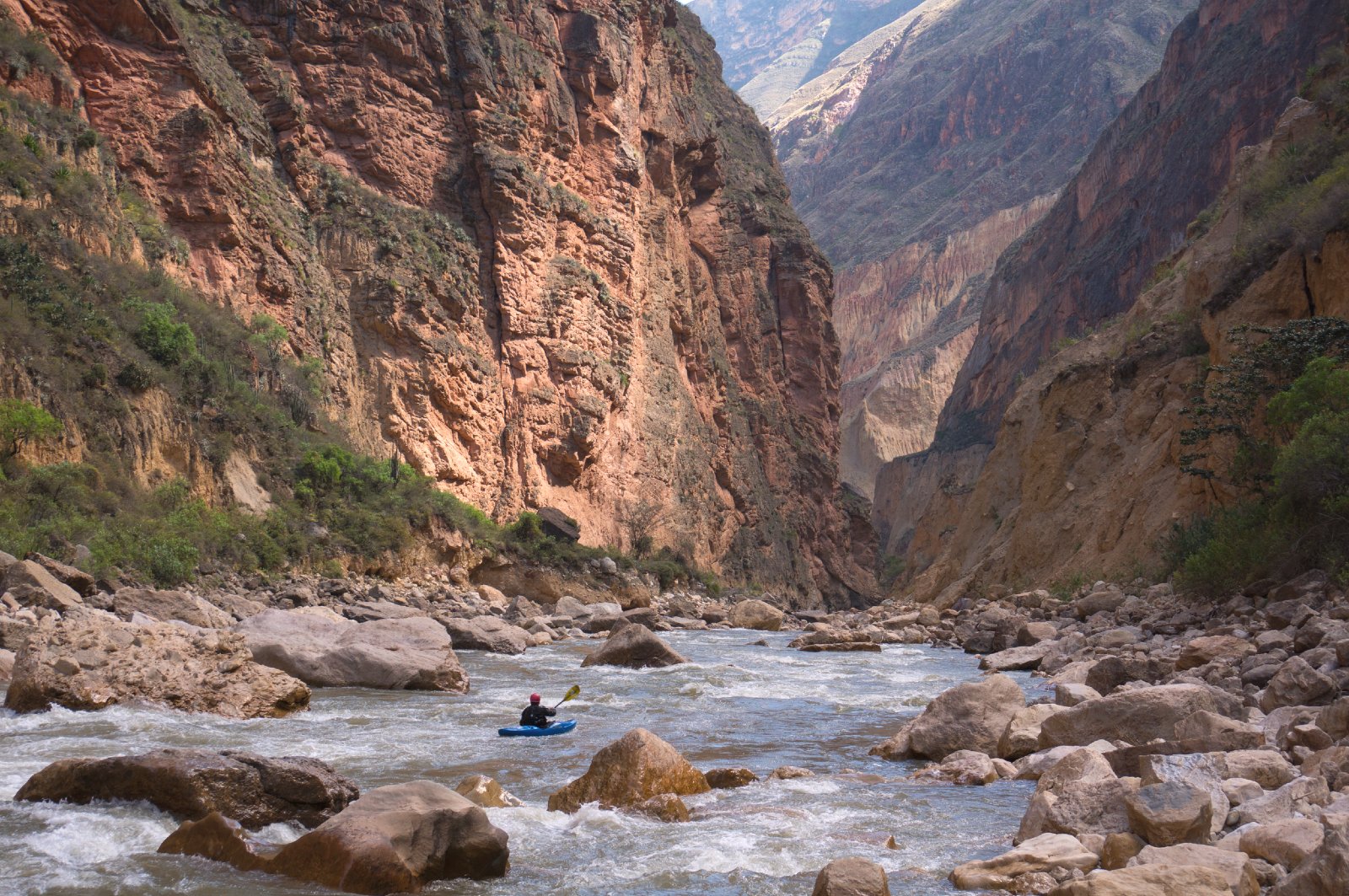 Since its formation, the team has created photographic, video and print materials and regularly runs community events. Last year, they came out with Confluir, a documentary about an international team of scientists and river experts who raft the Marañón for 28 days, documenting the ecological and cultural resources that proposed dam projects would impact. MWK’s ongoing efforts include running legal analysis and an accompanying media campaign with an aim to annul the Chadin II and Veracruz dam concessions. They use media campaigns to promote responsible tourism in the area, and prompt the Peruvian authorities to recognize this as an important resource in the region and create legislation that will protect Peru’s most important rivers.

Ben’s official MWK title is International Coordinator, but like most grassroots river conservation organizations, he’s a jack of all trades, doing design, social media, writing articles and taking a majority of the images for the NGO registered in Peru. For five years he worked as a volunteer with no intention of being paid, but as the organization gained recognition, he earned a small wage for the first time last year. 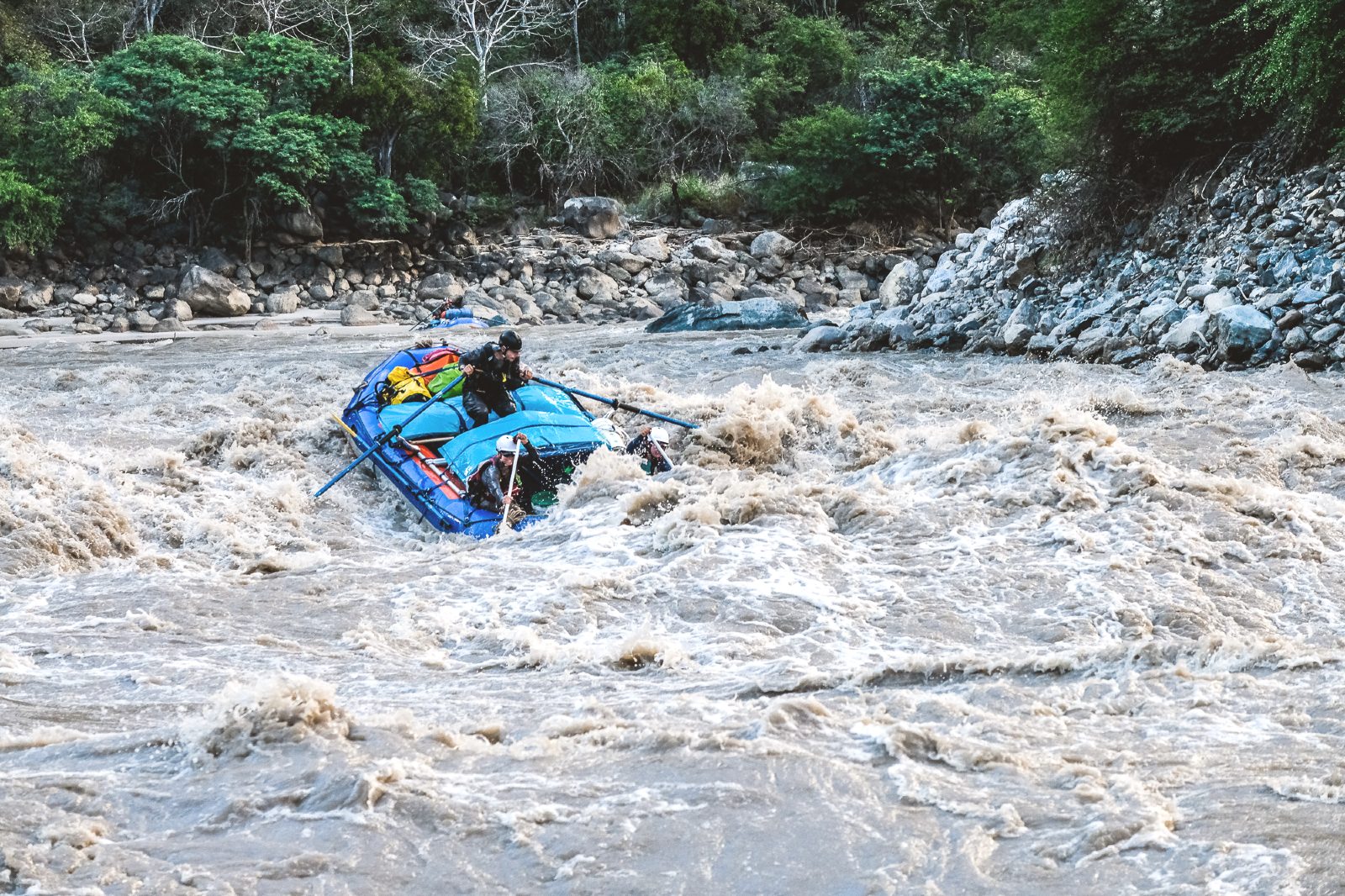 Ben has turned a passion project into a lifestyle. And in September of 2020, he is inviting international kayakers to the Amachay Yumi River Festival, a month-long festival to protect the rivers that are the lifeblood of Peru. Connecting conservation and kayaking, the event will be divided into five stages open to various whitewater craft and paddling abilities along the way.

The first three weeks involve grade V kayaking but the tour mellows out in the second two stages. Rafts and paddlers that can handle grade III-IV whitewater can join the tour at stage four while the final stage is a week down the commercially rafted section. The goal of the event is to pressure the government of Peru to cancel the contracts for the Chadin II and Veracruz dams. The group will paddle 1600 kilometers of the river, creating over 20 public events in riverside villages and towns. “Through this tour we hope to capture the personal story of the Marañón and the way that hundreds of thousands of people interact with her.” 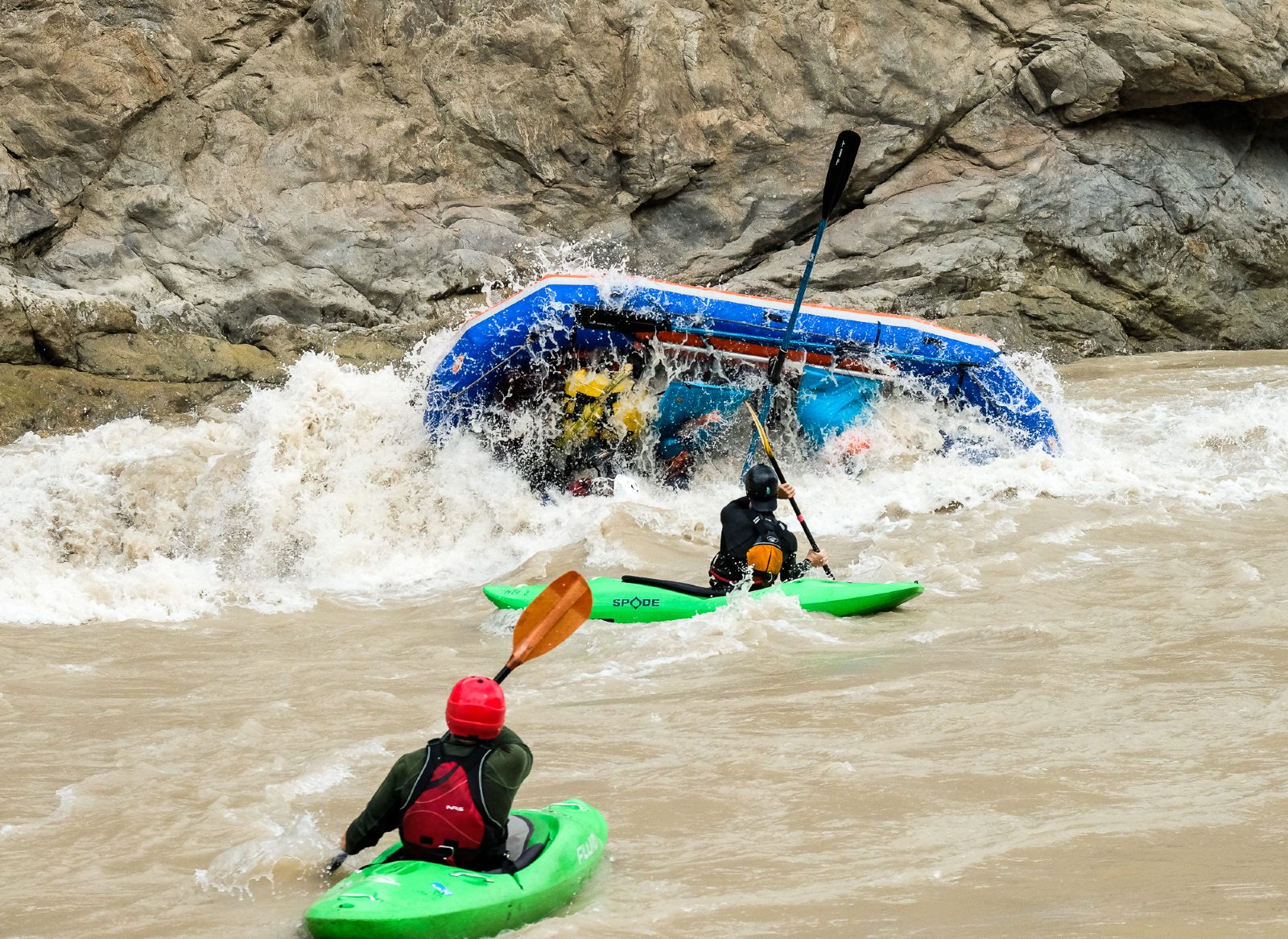 With emails sent, court cases nudged along, campaigns in the works and phone calls made, Ben checks out of the hostel and the city and heads ‘home’ to the river. Throughout the year he makes a living from raft guiding both in Peru and Australia, splitting his time equally in both countries. And he balances that screen time with ample river time. “I’m on the water for 150-180 days of the year…basically every second day, but a lot of the time this works out to 20 or 30 days straight at one time.” The balancing act of being in Peru to help while also making a living is tricky. So, Ben has started showing foreigners the river. In 2018, Luigi and Ben started their own guiding company called Marañón Experience which allows him to bring income into the villages and stay connected to the communities resisting the dams, while giving tourists a chance to get to know—and indirectly help protect—the Marañón.

“We have introduced a permit fee of $40 USD per person which goes straight to local development in villages and is overseen by MWK,” says Ben. “We’ve also reinvested all our profits to date in land purchases to create the Marañón Libre Conservation Area.” Most of his clients are American, but he’s in the process of making the trips more affordable and accessible. “We’ve just created a shorter two-day itinerary which we are hoping will be more accessible to the local and South American market, too.”

An average morning for Webb on the river has no computer or traffic. It does still contain some fruit and some eggs though. “Put the coffee on, make the brekkie—eggs, fruit salad, pancakes—then get people up, rig up and float down the river, maybe stop in the village have some beers, drink some coconuts, chew some coca leaves, maybe dance if there is a fiesta then lose a game of soccer or volleyball to the local kids. Then we head on down river and stop in the afternoon when we find a beach, set up camp, sit around the fire and enjoy the stars. Yea, that’s a good day on the Marañón. 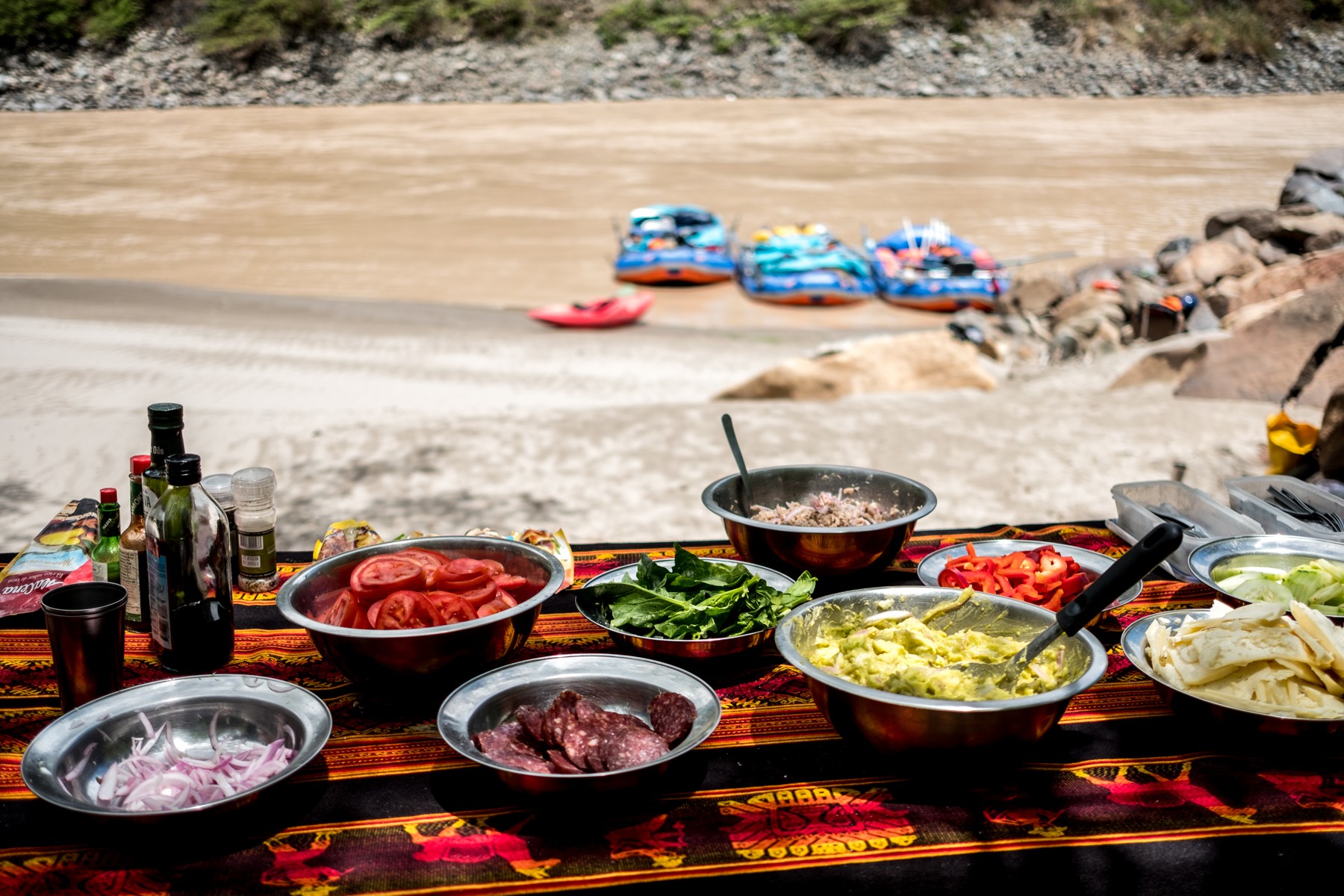 Floating down the café au lait colored river, surrounded by the rugged, rust-colored mountains, it’s no wonder Ben chooses to spend his time fighting to protect it. “I feel that protecting a free-flowing river—the source of the Amazon to be exact—is the most valuable thing I can possibly imagine doing. And it’s in that nice crossover of where I find fun, where I can be useful and where I can just make a living.”

“Kayaking gets me in the flow. It helps me find my flow. And it provides peace.” That energy can easily flow into something productive, something useful. “Just think about what the most valuable thing you can do with your time, and then do it.”