A Little Grand Canyon in the San Rafael Swell

Things didn’t look promising. We’d left pavement behind and I was—not exactly driving—sort of skidding my truck through a mud trough in the rain. Up ahead, a soiled hatchback made like wet clay on a pottery wheel and spun around, slogging back toward the interstate.

Most of the year, this was a dirt road through the recently designated San Rafael Swell Recreation Area. But heavy rain had been falling for days during one of Utah’s wettest springs on record. Now parts of the Canyonlands region looked more like Ireland. Other than this road, the rest of the Swell hadn’t received the message. The landscape beyond our windows seemed as dry as ever. Hopefully, we’d actually find a river to paddle. 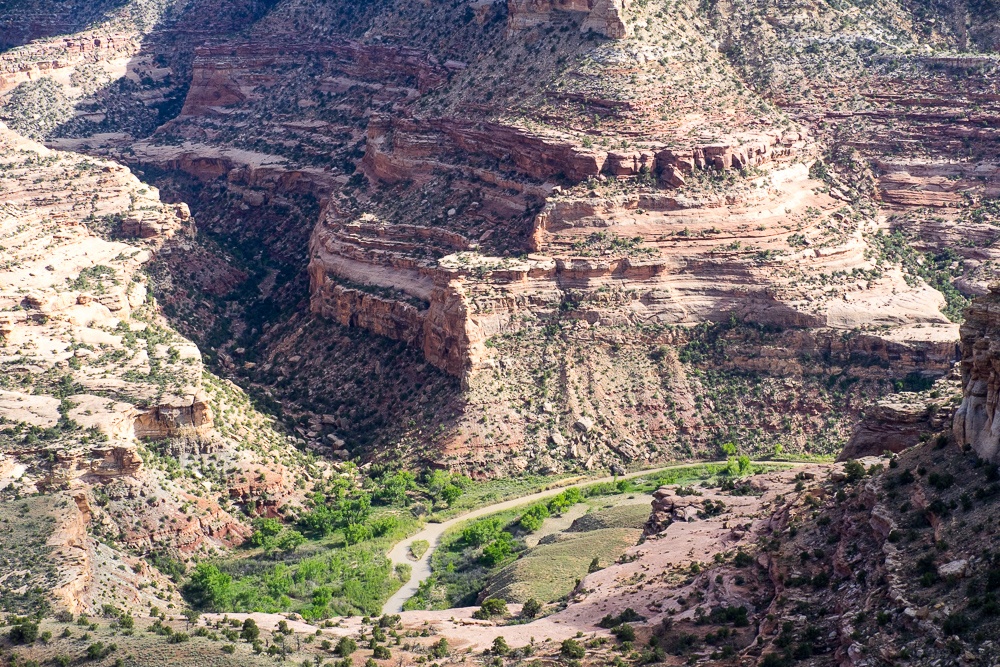 Over a slow-moving hour, the road descended 1,400 feet in elevation. We first crossed a sloping plateau and then passed beneath colorful buttes and mesas. At the foot of distant cliffs, we spotted a green ribbon of vegetation.

The rain stopped by the time we parked in a nearly empty campground. There were all the curious signs of a place where paddlers sometimes congregated. Two kayak paddles leaned against an information board, which offered mostly staples holding tattered corners of papers long blown away.

Despite it being Friday of Memorial Day weekend, only three sites seemed occupied. But no people. A single tent had fallen onto its side and flapped in the wind. I walked out to the old Swinging Bridge and was relieved to see about 500 CFS of silty gray water racing between sunken banks of the San Rafael River. 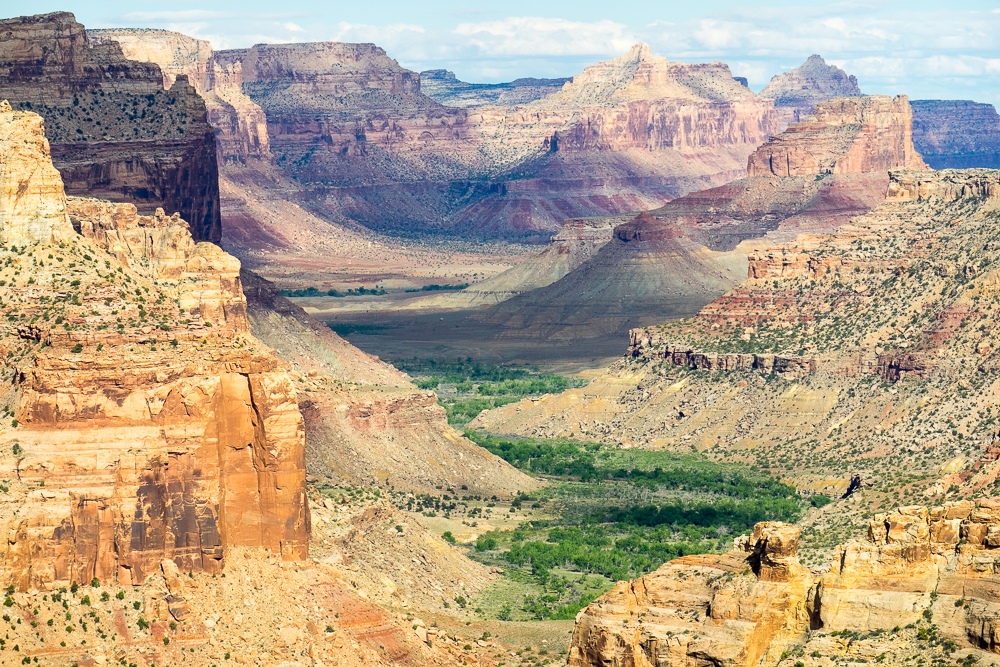 After setting camp, we drove up Buckhorn Wash, stopping to examine a pictograph panel. There were dozens of images on a cliff face of Wingate sandstone, painted over 2,000 years ago by Native Americans using an iron-oxide pigment. Most images were human-like figures with elongated and triangular bodies. A distinctive feature of the Barrier Canyon Style rock art found in the region.

We followed dirt roads toward the overlooks on the little north rim. We weren’t sure what to expect, given how many places claim to have smaller or “other” Grand Canyons. There are Grand Canyons of the South, the East, the North, and the Midwest. Of the ten flattest states in America, at least seven have their own so-called Grand Canyons.

But as we walked out to the viewpoint, it was clear that Utah’s was worthy of the name. Compared with roughly 5,000-foot depths of the real Grand Canyon, the Little Grand offered a 1,200-foot chasm formed from layers of orange, white, and red rocks. A low-volume river meandered through riparian bottomlands. 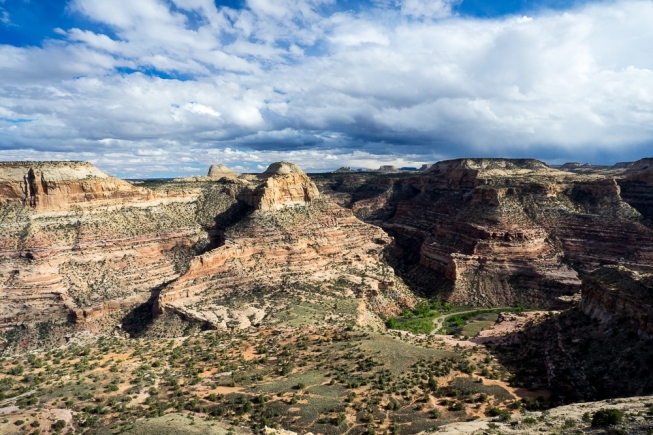 View of the 1200′ depth of The Little Grand Canyon. 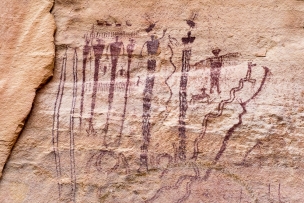 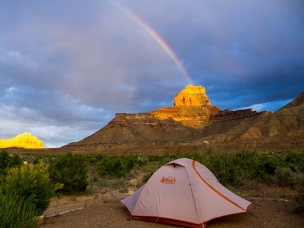 We walked a short way on the Wedge Overlook trail. It runs for about 12 miles along the rim, which we planned to hike and bike later in the weekend. When we returned to camp a few hours later, the scene had completely changed. Almost every site was occupied. There were kayaks atop vehicles and rolled inflatables on tailgates. Our original plan was a bike shuttle. But after an evening of meeting campground neighbors around a fire, we agreed to join forces.

The next morning, we rolled across a high desert plain in a caravan with new friends. Our four generations of paddlers included a pair of brothers on a paddleboarding reunion trip. The two of us in our Pyranha Fusions. A family in a mini oar rig. And an adventurous retired couple with a double IK.

We were early arrivals to the put-in, dropping our boats and parking with a few other vehicles on a high bluff. While gearing up, a steady stream of arriving vehicles transformed the dusty Fuller Bottom into a miniature Lees Ferry. All the classic features of a Grand Canyon launch were on display, just smaller. 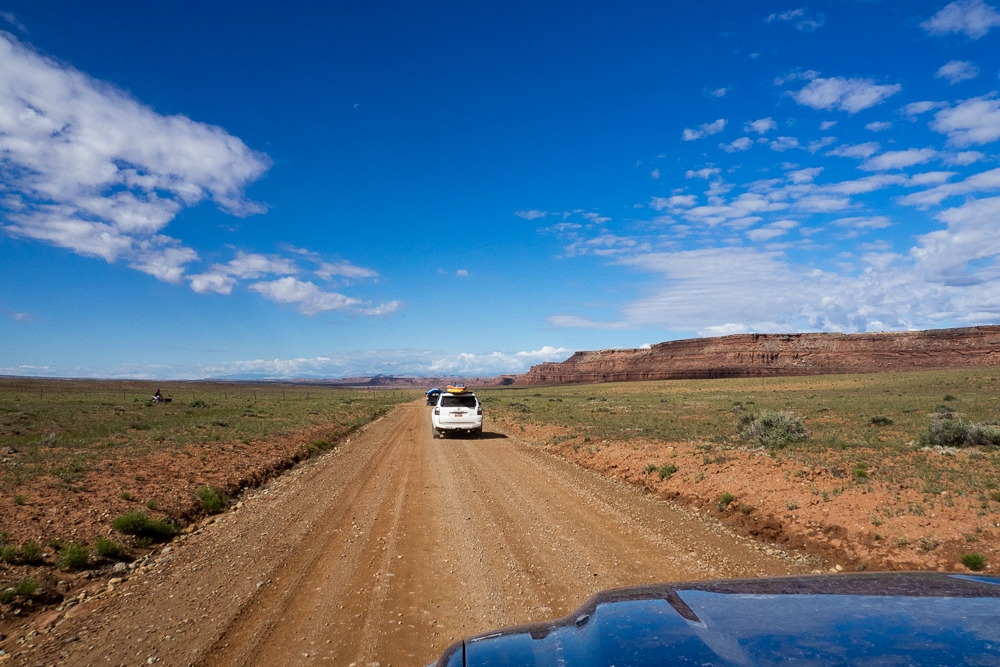 One car blocked another, which began honking. A river family dragged SUPs, paddles, and day-bags toward the river. They dropped something, turned back to retrieve, dropped other things in the process. Soon the roadway looked like a flea market stall.

A young couple argued at their truck over where a certain whatnot had been packed in which drybag for their overnighter.

We took to the river like bandits escaping from the law, except in this case we were fleeing the long arm of logistics. Just like an actual Grand Canyon trip starts with low cliffs of Kaibab Limestone that only hint at what’s to come, Little Grand began in an inauspicious bottomland of Cottonwoods that didn’t suggest anything grand. We floated between wheatgrass and willows, waiting for the canyon to rise. 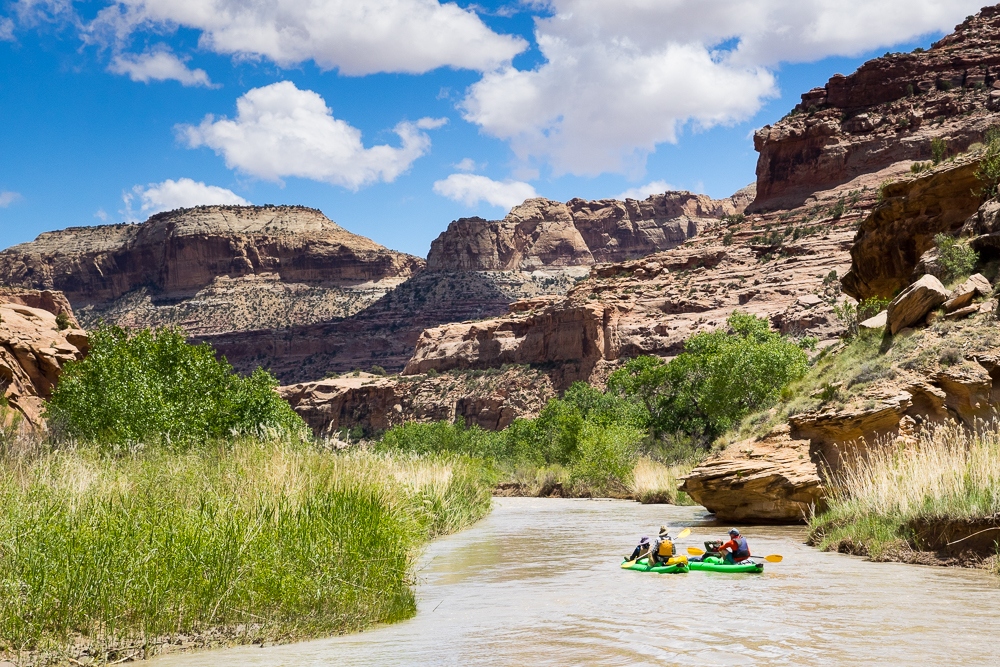 Unlike the Grand Canyon, and most of the Colorado Plateau, which was lifted as one massive block of horizontally layered rocks, the San Rafael Swell was squeezed upward into what is called an anticline. Basically, a dome of warped sedimentary rocks. For that reason, some rock layers in parts of the Swell have a curved or folded appearance. Over eons, erosive episodes carved out inner sections of the Swell, with the San Rafael River forming the deepest gash through the Little Grand Canyon.

As we paddled downstream, we passed the first of Little Grand’s rock units. The Carmel formation, which creates slopes from alternating layers of light-brown sandstone and light-gray limestone. 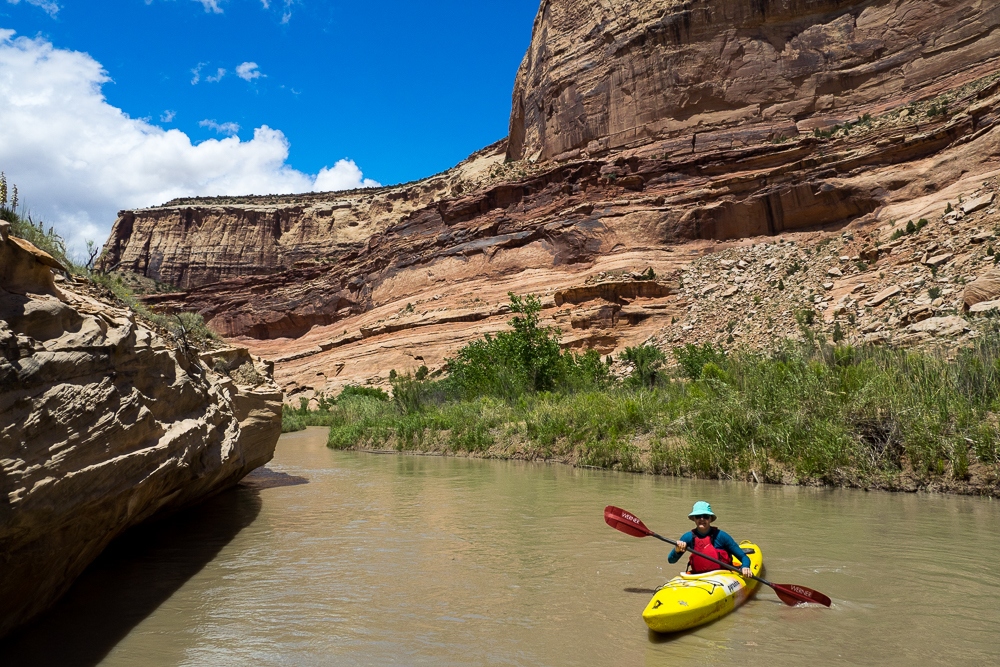 Emerging from underneath, next came one of the Southwest’s most famous rock formations. (Scoot to the edge of your seats, please, while I draw this out.) It’s the same formation that creates the sheer cliffs of Glen Canyon, including those found through Horseshoe Bend on the Colorado River. (Prepare for applause.) Created by ancient sand dunes, the windswept patterns of which can still be seen frozen in time. (Am I the only one who treats geologic formations like celebrities?) Please welcome, none other than Navajo Sandstone.

Often having an orange-brown color, here it displays a more whitish hue with streaks of black desert varnish. A few hundred feet thick, the Navajo Sandstone unit visually anchors the Little Grand. From river level, it appears to move ever higher up the walls while progressing down the canyon, much like the Redwall in the actual Grand.

We were ahead of the pack as we paddled downstream. We passed a semi-nude couple lying together on a high bank near a tent. They were possibly sunbathing, and maybe doing something additional, as we approached. They hurriedly covered themselves with towels and waved.

Our group was on the lookout for a side creek called North Salt Wash. It comes in midway on river right and has a short hike to some pictographs. We found the creek mouth in the Little Grand’s third geologic unit, the reddish-brown Kayenta formation, which forms slopes and terraces.

After lunch, we hiked up the creek and spotted the pictographs in an alcove. The images depicted groups of Barrier Canyon Style figures clustered together. They clutched long shafts which were probably hunting spears. That said, these spears also mildly resembled paddles, like an ancient interpretation of the put-in scene at Fuller Bottom.

The human history of the Swell is only sporadically known. Ancestral peoples were in the area starting several thousand years ago, including the Barrier Canyon culture which left much of the rock art. After them came the Fremont culture, but they mysteriously vanished about seven hundred years ago.

Later tribes, like the Utes and Paiutes lived in the area seasonally and passed through on the same trails arriving white settlers used. During the late 19th-century, outlaws frequently fled into the Swell after robberies. There have also been periods of grazing and uranium mining, but little modern development. There are no permanent residents, and there’s only one paved road, I-70, which splits the Swell in half. 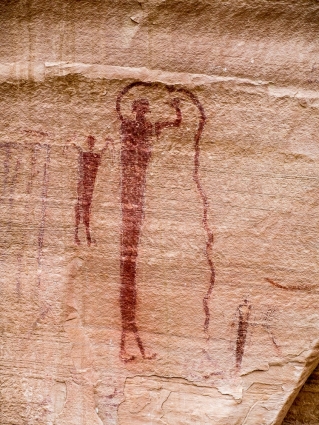 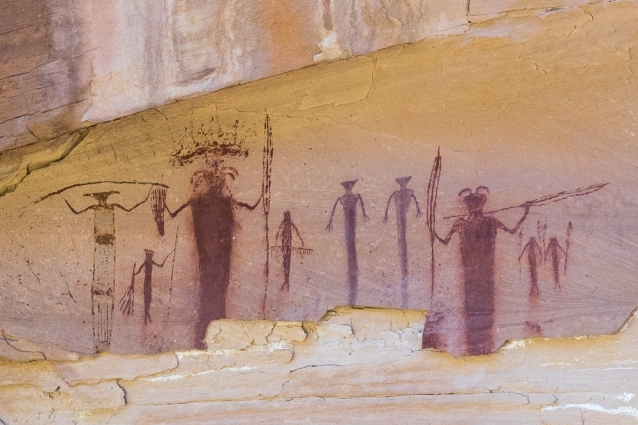 For the past 20 years, various plans have been proposed for federally preserving the region. In 2019, the Dingell Natural Resources Act designated 217,000 acres as the San Rafael Swell Recreation Area, which is interwoven among 14 wilderness areas totaling an additional 450,000 acres. The new designations allow established recreational uses to continue while protecting the area from future mining operations. The BLM will continue to manage the newly designated area.

Returning to our boats and continuing down the San Rafael River, we found ourselves in the middle of a paddling pack. Perhaps 50 to 60 paddlers had launched on the Little Grand during this Saturday of Memorial Day weekend. Maybe 20 of them seemed to be on overnight trips, and we accidentally stumbled into a miniature game of campsite competition.

“How far you headed for the day?” I asked one group, as we passed them on the outside corner of a pool.

They glared at us and refused to answer like we were aiming to steal their favorite beach. They didn’t hear me when I explained we weren’t camping, just curious. A few of them tried to sprint out ahead, but they soon grew tired and fell back. 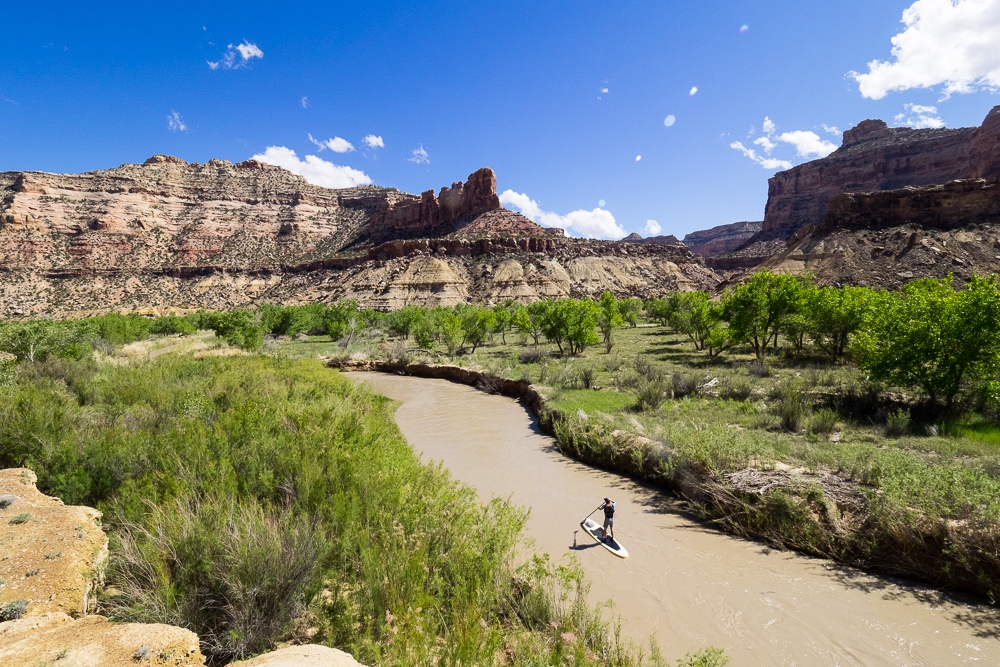 We left them behind, to catch their breaths in loaded boats, and we paddled onward through rising cliffs of orange-reddish Wingate Sandstone. Next came the Chinle Formation, with interbedded layers of sandstones and limestones, the hues ranging between greens, grays, reds, and browns.

Finally, the Little Grand Canyon opened into a corridor with meandering Cottonwood bottomlands between slopes of Moenkopi, a reddish-brown siltstone. Fun fact, if you’re into the field of coincidental geology: Moenkopi is the same formation that creates the crimson slopes at water-level, just across the river from the boat ramp at Lees Ferry. 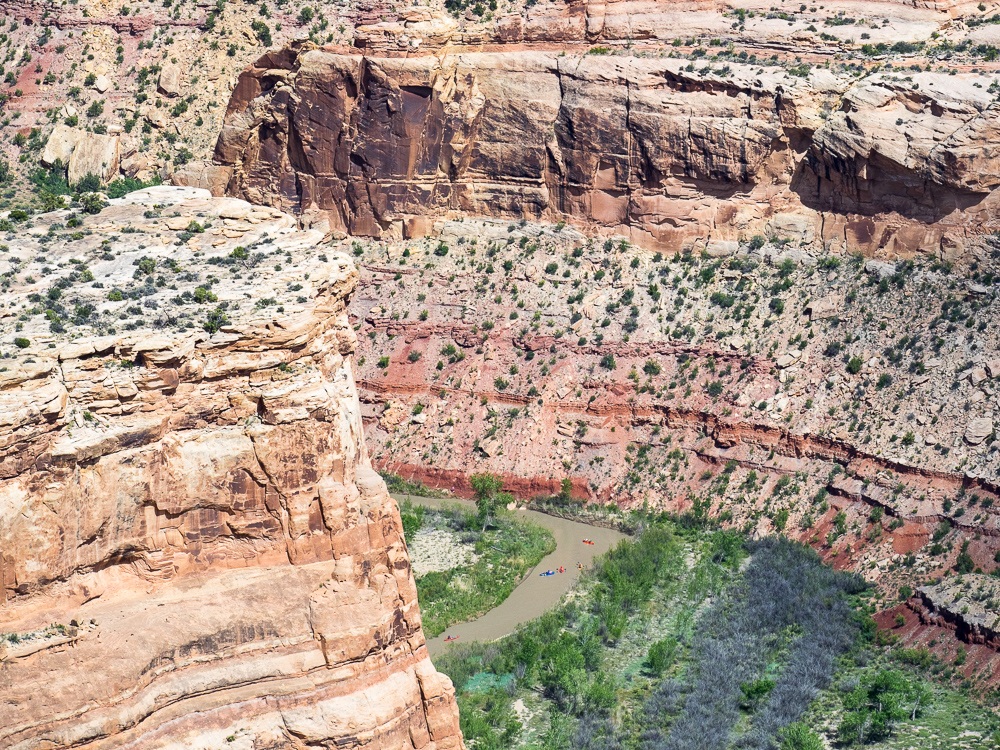 The total mileage for the day was 17, and everyone in our party was feeling tired.

“This is really great,” said my wife. “But kind of long.”

A bit like how a real Grand Canyon trip can feel, but with this one shrunk down to weekend size. After taking out at Swinging Bridge, we all agreed on one thing. Just like the real deal, we’d definitely be paddling the Little Grand again.

We stayed an extra night and checked out the rim-top trail by foot and bike. By Monday night the crowds had completely deserted the entire area again, like no one had ever even been there. 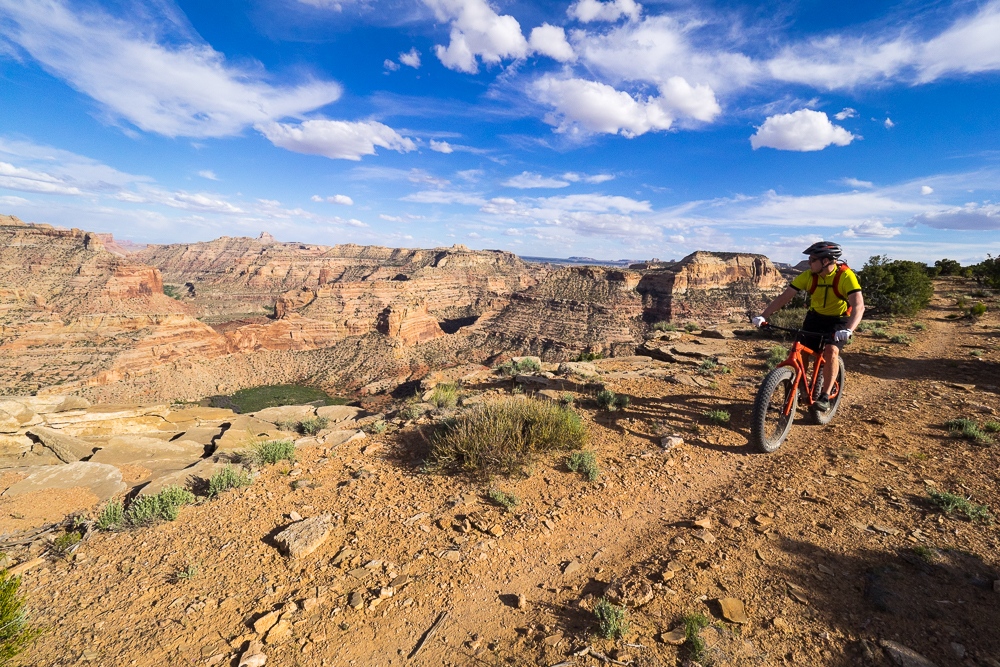