Getting Through the Gates on the North Platte River

“I don’t care what rivers your buddy has run. This is Northgate and Northgate eats rafts,” said Hack of Hack’s Tackle in Saratoga, Wyoming.

Allegedly…that’s what Hack said.  My friends, Dave and Eric relayed Hack’s words to me second-hand.

We were already at the Routt put-in on the upper North Platte River, gear strewn all around us, and just on this side of “too late,” when Dave and Eric reenacted Hack’s reservations about our fishing trip. The water level for our early June trip was at 850 cfs and falling. Below 900 cfs the river guide lists the run as “Very marginal for rafts.”

In hindsight, cracking a beer with a shrug was probably not the correct response to Hack’s dire warnings.

The Upper North Platte is an amazing but fickle river. It originates in Northern Colorado, but only becomes large enough to float as it nears the Wyoming border and then only for a short time in the spring and early summer. Its intermittent flows, difficult access and somewhat technical whitewater combine to keep it under the radar of most western boaters.

But for those who know about it and those who time it right, an Upper North Platte multi-day river trip delivers the goods: canyons, whitewater, trout, hikes and some great camps. 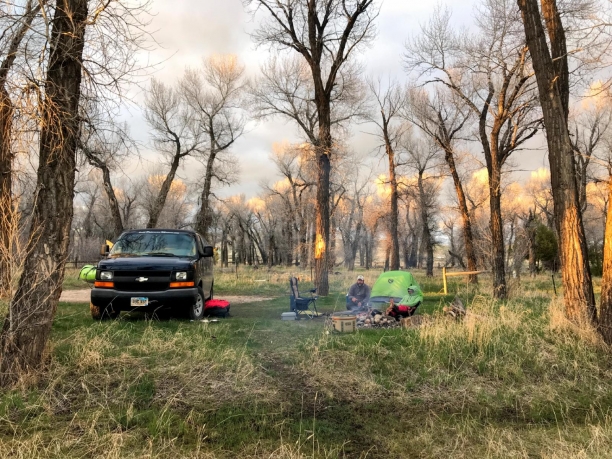 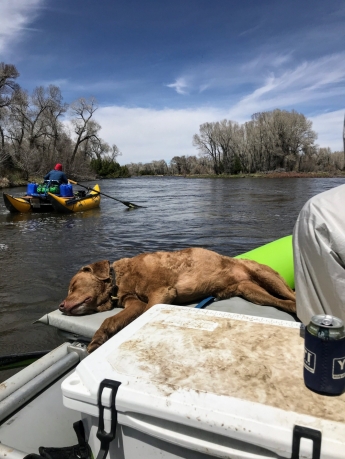 For the brave—or foolish—the trip starts at the Routt River Access point just across the Colorado border off of Highway 230. But “river access” is a term that should be used loosely for the North Platte. At the end of a dirt road at the top of a hill, two metal rails descend about six flights of concrete steps that end in a concrete cliff ten feet above the river—and this is the “better” of the access points for North Gate Canyon.

Those looking to avoid the rapids of Northgate Canyon must put in at the Six Mile Access site, which requires boaters to haul their gear over a quarter of a mile down a steep trail to the river. And because Six Mile Access is located in the Platte River Wilderness Area, no carts or mechanical means of conveyance are allowed. The Six Mile Access will absolutely test how much you like to raft.

Back at Routt, the river looked tame and floatable. With the raft rigged and the gear packed we shoved off—the North Platte wasn’t going to pick up more water while we sat there and thought about it. The river became bonier the farther we rowed from the Routt put in, but not disastrously so. I stayed alert on the sticks and dodged some rocks (a push, a pry here and there), and ordered some bouncy house impressions (everyone to the front of the raft, everyone to the back). 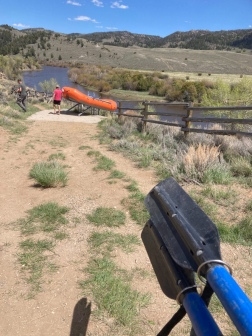 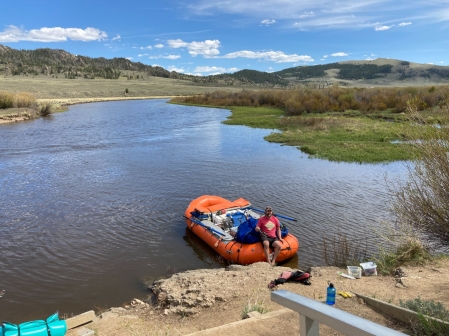 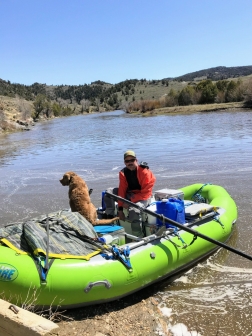 Windy Hole Rapid, which is the first rapid about a mile in, was loud but tame. Guidebooks list the rapid as class III, but mostly because of its remoteness, along a road it would be a III- or a II+. We didn’t scout. I made a couple of moves off the rocks and high fives all around. Hack’s warnings be damned was the general consensus.

Just about five miles into the canyon, we came to Tepee Camp on river-right. Just up a short trail sat a stone fire ring and a couple of flat spots to pitch a tent below tall but not dead pines. A small creek trickled down a ravine into the river, providing a harmonizing soft water sound to the river’s louder movement.

In the morning we cooked breakfast, loaded the raft and moved downriver into the heart of the canyon. Since no one had bothered to bring a map, we were all working off of imperfect memories of maps we had seen coupled with a few YouTube videos of the major rapids. What could possibly go wrong? 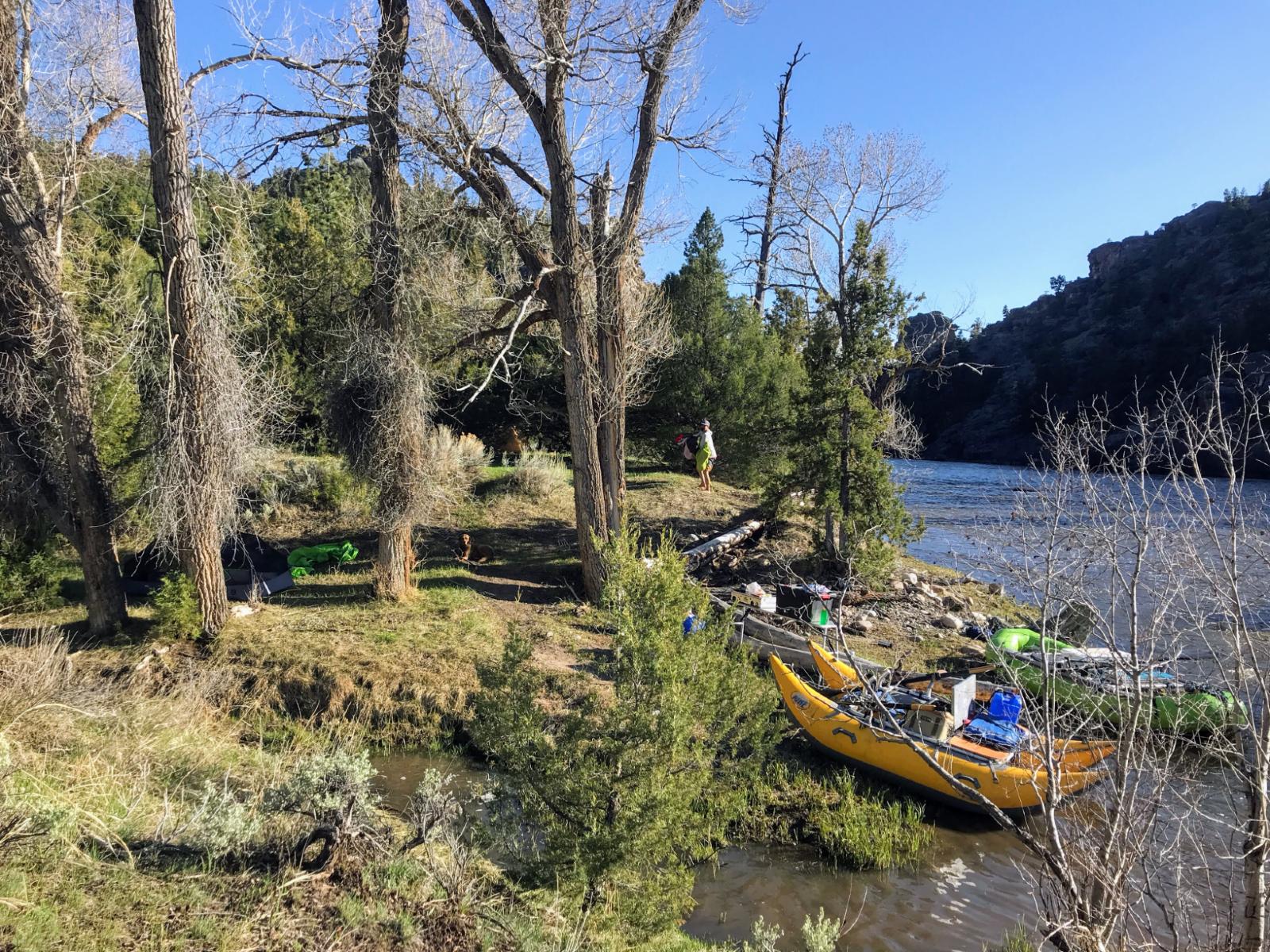 A few small rapids, some deft oar strokes and we were mocking Hack.

All of the five major rapids come in the first nine miles of the run, officially known as Northgate Canyon. At flows between 900-2,000 most of these rapids are II+ to III. But as flows increase above 2,500 eddies disappear and IIIs turn into solid IV and IV+. Here the canyon rises, big boulders stand guard at the river and the water picks up speed. You can scout some of the rapids but Cowpie and Narrow Falls are difficult to scout because of the length of the rapids and also because the canyon creates a “gate” at Narrow Falls. You can see the horizon line of the rapid but you can’t see what comes next.

For all practical purposes Cowpie and Narrow Falls a.k.a “The Gates” form one continuous rapid—and it certainly felt that way once we hit it. 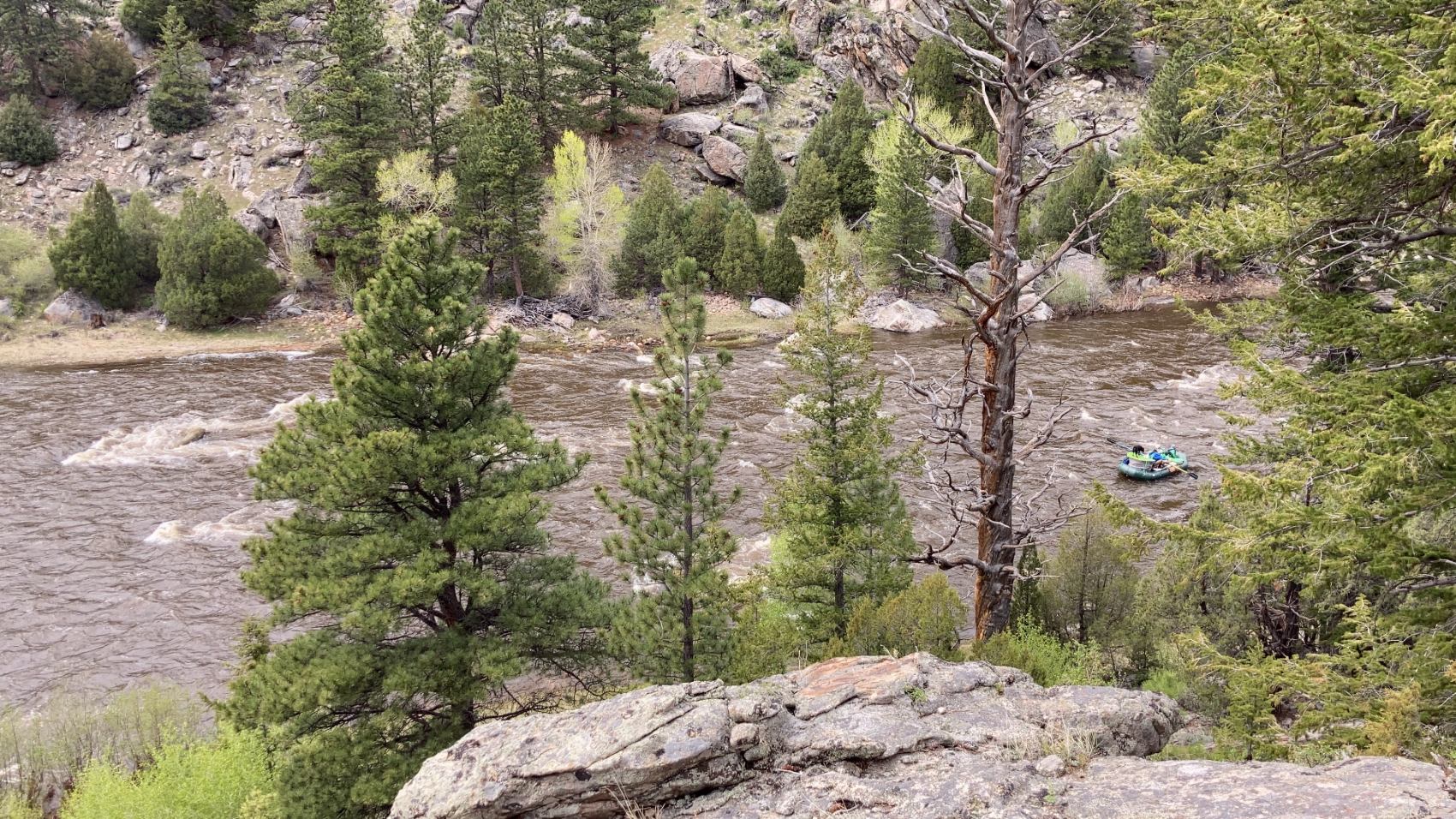 At most flows, Narrow Falls is a straight right-hand drop and flush. The move is to keep your “right shoulder just off the boulder” but the lower falls can be chaotic with some rocks to dodge. More than a few rafters have flipped or pinned in Narrow Falls. The whole run deserves respect. More than we had given it.

I tried to stop to scout but after one aborted effort in which we nearly left Eric’s dog behind onshore, we ran it blind. We plunged into the boulder field, I’d like to describe it, but something about terror obliterates your memory. I remember two key moves, both of which I only did partially right. One was a missed channel and a split-second decision to squeeze my raft between two rocks that were not much wider than the raft. Dave flew off the swivel chair of death on the fishing frame and landed just behind me.

The next mostly missed move was at the top of a narrow falls where a large rock sits, waiting to—just as Hack said—eat a raft. We did that section backward, not because I wanted to, more because that was what the rapid wanted us to do.

Spoiler alert: We lived. But for the rest of our lives, we would show more respect for Hack’s advice. 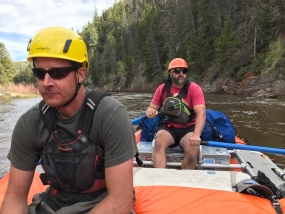 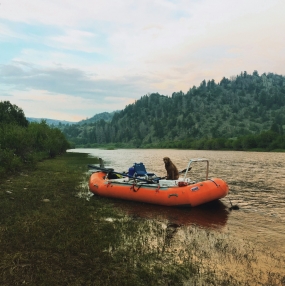 Following Tootsie Roll rapids and Stove Pipe Rapids (straight-forward IIIs), we passed the Six Mile Access area. The highest density of camps on the Upper North Platte exist between Six Mile and Pickaroon. Most of the camps have established fire rings and boaters can find an abundance of driftwood along the shore throughout the canyon. Wyoming has fairly lax campfire laws, which largely amount to “don’t burn down the forest.”

On river right a hiking trail provides access to fishing and other trails that crisscross the rugged land of the Platte River and Savage Run Wilderness Areas.

The second night we camped at the best camp on the Upper North Platte. Which one? I can’t remember… (with a wink and a nudge). 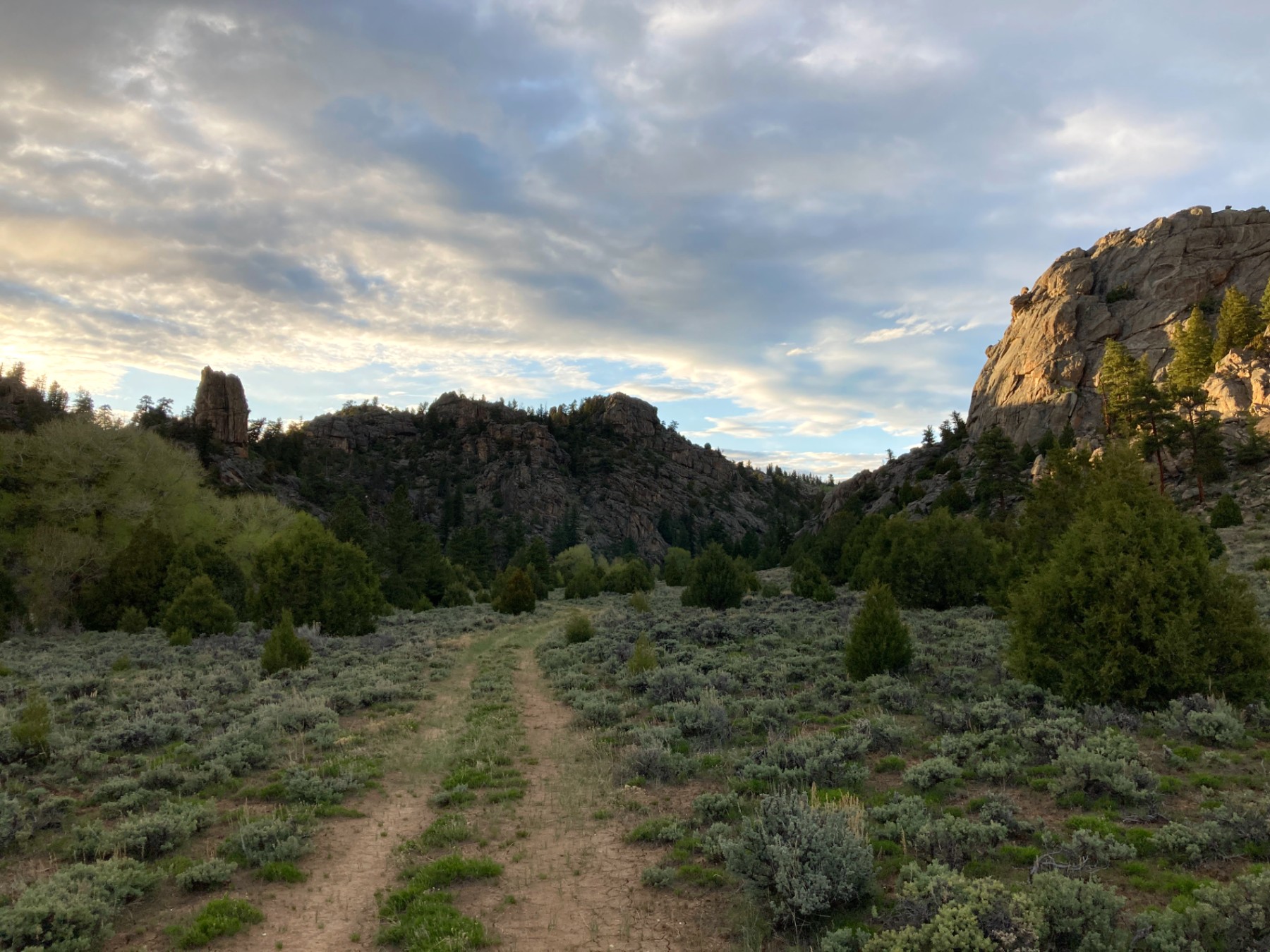 Pickaroon Campground is the next boat access below Six Mile. Again, access is used loosely. The campground is remote and beautiful. Twenty-seven miles of bad roads stand between campers and Pickaroon.

Once past Pickaroon, the big pines of Northgate thin out and the landscape opens up into high rock buttes covered with grass and sage. Downriver, more and more of the land is private and, in Wyoming, that includes the banks of the river and stream bottom itself. Even anchoring on the bottom of the river constitutes trespassing. Fortunately, small red and blue rectangular signs respectively mark private property from public.

We fished as we floated. The water cleared but remained tea-colored, so we hucked streamers toward the banks and were rewarded with some nice rainbows and a few brown trout. The entire Upper North Platte River from Sage Creek below Saratoga to the Colorado/Wyoming State Line is classified as a blue-ribbon trout waterway, managed exclusively for wild trout. In addition to rainbows and browns, the river also carries some cutthroat and brook trout.

Like everything else on the Upper North Platte timing is everything. If you come at the right time, to the right water level, to the right hatch, the fishing can be lights out, which explains the Lear Jets at the tiny Saratoga Airport. When the fishing is good, Mach I becomes an appropriate speed. 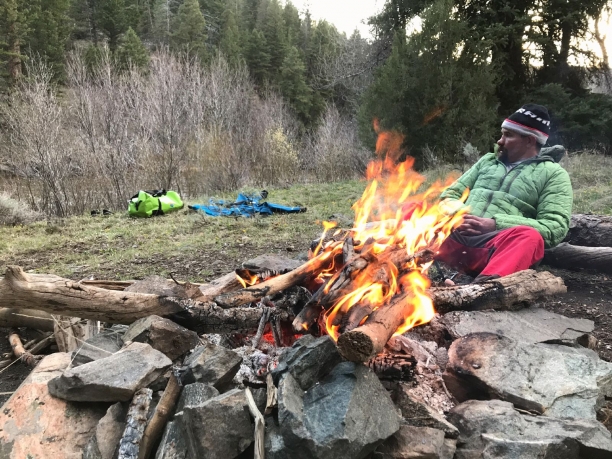 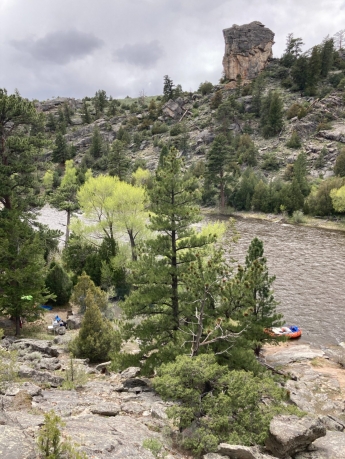 Dave rowed for a time. The section below Pickaroon is, in places, shallower than Northgate. Dave learned an important lesson about downstream oars in shallow water. An oar stuck on a rock and the loaded raft rolled right over it bending it, severely. My spare was a last resort spare oar—at least a foot shorter than my other oars. We used the crook of a fallen tree to bend it back and it looked fine.

The plan for the day was to find a campsite early and wade fish. This I didn’t understand at the time was an indirect complaint of my rowing skills or my raft or a combination of both.

Apparently, when descending a river there are multiple types of rowing. Like rowing to go nowhere, rowing to go somewhere, rowing to save your life, and rowing for fish, which I guess, according to Eric, involves not rowing at all. He claimed that my oar strokes scared all the fish.

I have come to believe that the appeal of fly fishing is in the endless excuses available—if you do not succeed it’s probably no fault of your own. 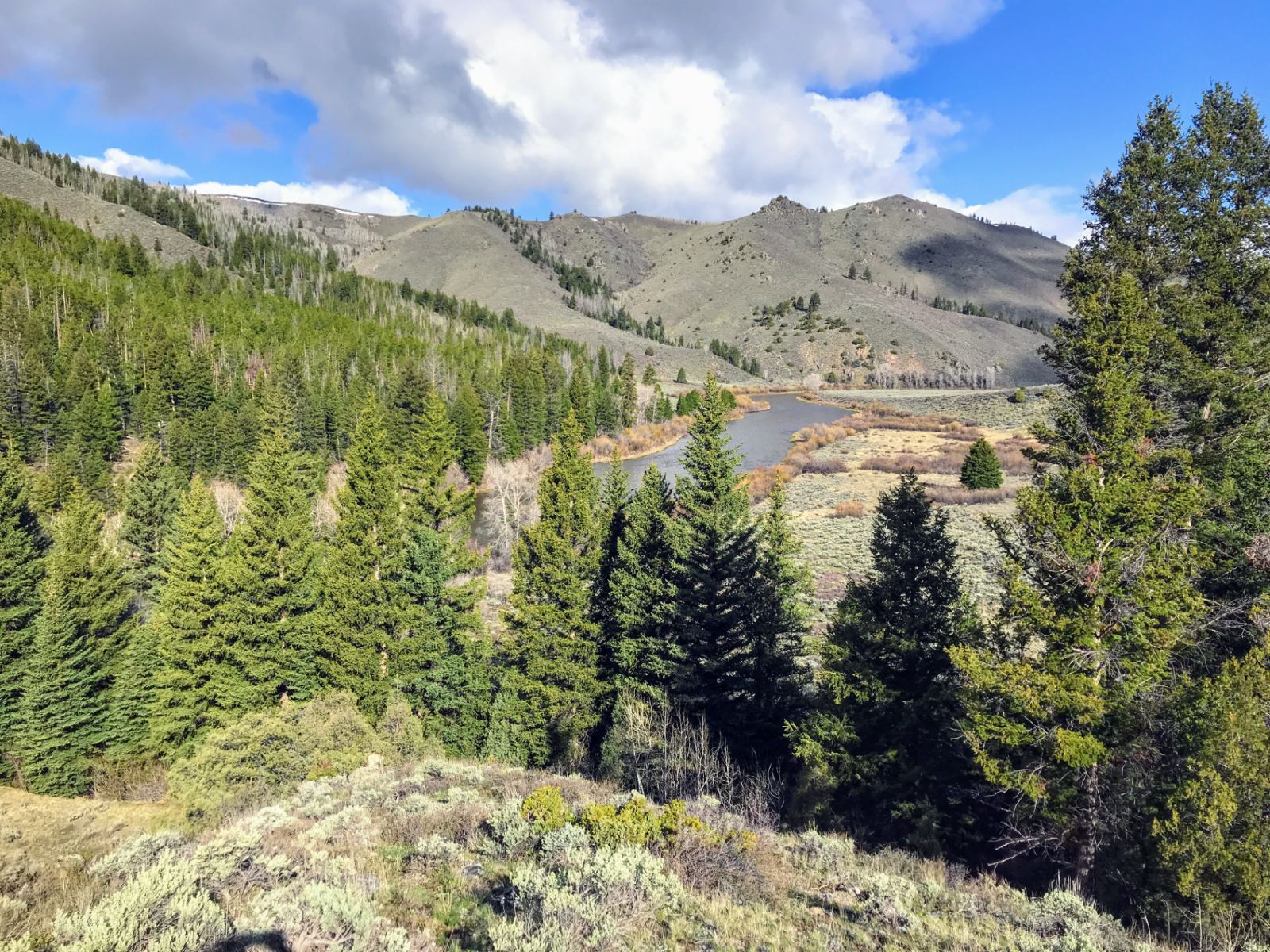 The third night we camped at Big Creek on river right. After dinner, I climbed a butte behind the camp. Empty gravel roads swept away into the distance but nothing else infringed on our solitude. It was, as much of Wyoming is, wild, without trying to be.

The next morning we loaded the raft and continued. Below Big Creek the river crosses lowland pastures and irrigated fields, some of the wild feel disappeared, here and there a house appeared along the river, or cattle grazed, but fish filled the braided channels of the slower river offering some consolation.

Once under the French Creek road bridge the landscape began to return to rocky peaks and big trees as it entered the BLM land surrounding Bennett Peak. Here another great campsite along a small creek awaited us on night four. We climbed back to a high meadow and came across a herd of elk. We also found a number of deer and elk antler sheds. 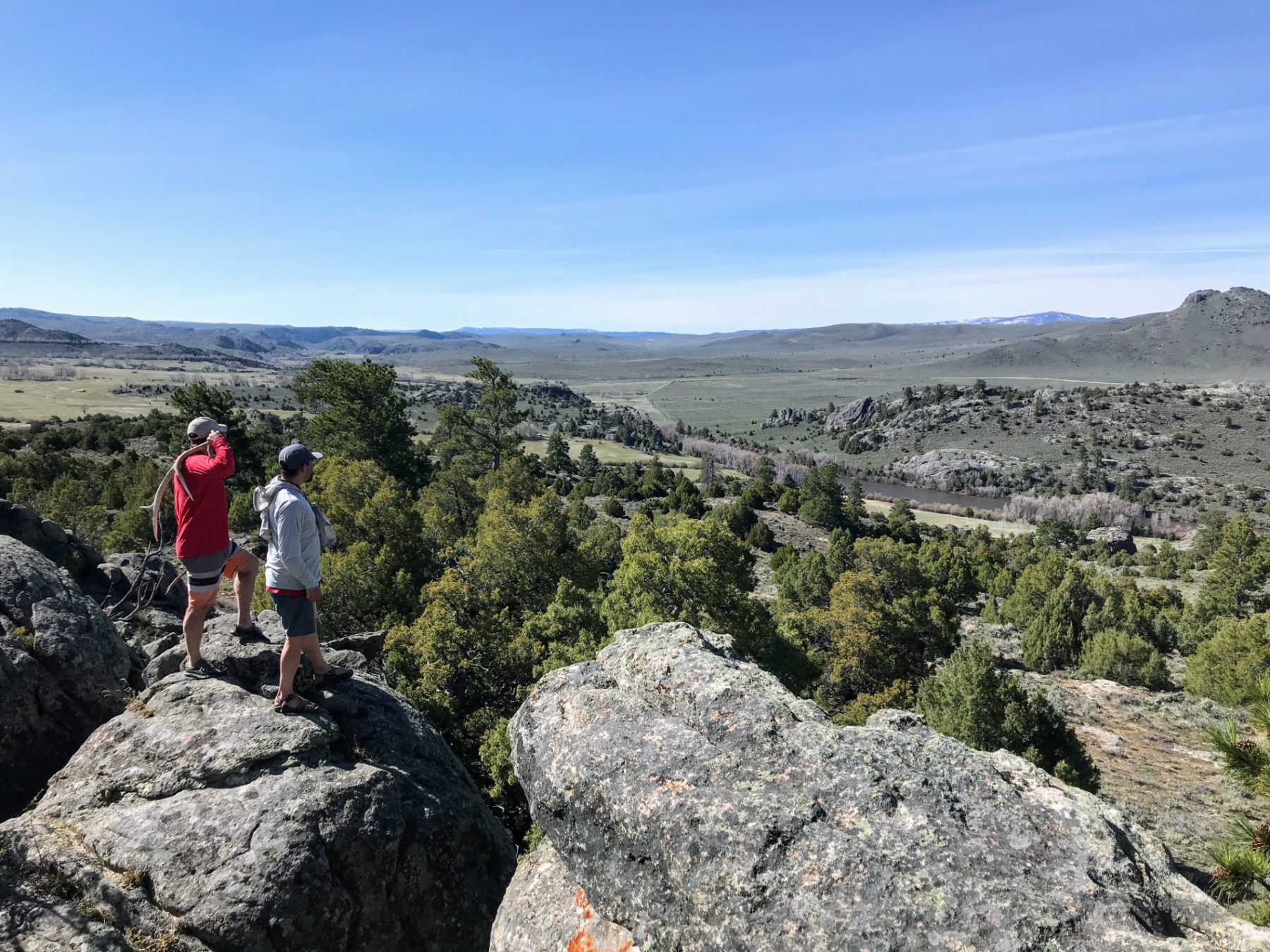 On day five we floated out to the Treasure Island Takeout. On our way we passed a moose browsing on some willows and more Bald Eagles than we could count on our fingers and toes.

Then, at some point, on a mostly empty river, we looked behind us to see a line of rafts. The river braids considerably but we couldn’t figure out where they had all come from until we remembered that the Encampment River, another world-class trout fishery, flows into the North Platte near Treasure Island.

A cloud of mosquitos at the Treasure Island boat ramp forced us to keep our de-rigging celebration short.

But back in Saratoga, we celebrated at the Hobo Hot Springs, which is free and open to the public 24 hours a day. The hot water felt like the perfect ending to a great trip.

Oh…and on the way out of town, we had one more errand: we stopped at Hacks and gave him a tip for the shuttle…and a tip for his tip.

(Moral of the story: Support the locals… And listen to them!)