Upon reaching Nebraska, I exhaled in relief. Every direction offered nothing but rolling hay fields, plots of corn, and patches of wildflowers. I drove through the occasional rural town, mostly empty except for a few locals chatting around pick-up trucks in the shade of grain silos. 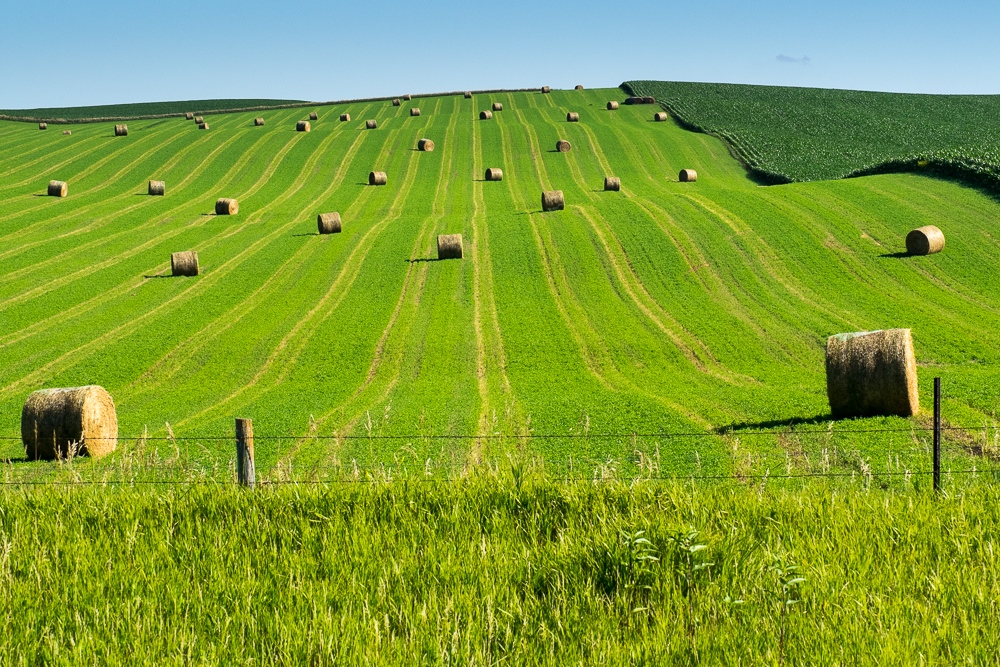 It was the second week of July, the fourth month of the pandemic, and my fifth day driving west like an outlaw fleeing the Deep South. My first day, I bypassed south of Atlanta on rural roads and stopped to stretch my legs in the square of a pleasant town. Immediately, a county sheriff’s vehicle began circling, with the deputy inside watching me closely. Looking up, I realized I was standing under a massive confederate monument. All around the square, restaurants and shops were packed with crowds who seemingly dismissed the virus as overhyped or a hoax.

Pushing onward, my next stop was the riverside ghost town of Old Cahawba in Alabama. The site director later said strangers on the streets of nearby Selma were arguing about whether masks prevented or caused Covid. To say it was a strange time to be traveling across the U.S. was a major understatement.

After months being locked down in the coastal Low Country of South Carolina, I was finally out trying to salvage the timeline for my next book, Adventures on the Outlaw Trail. The project combines stories from the Wild West era with a trip guide to land and water adventures, outlaw hideouts, and historic sites along old escape routes. 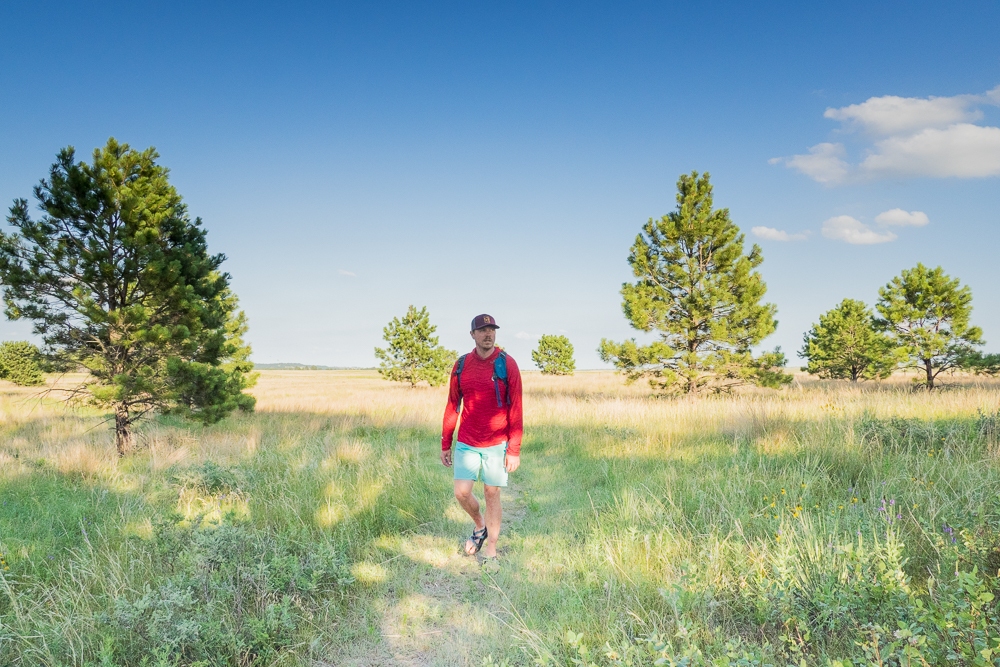 Reaching the Ozarks, I tried to keep to my original spring schedule, despite it now being humid summer. On the hot morning of my third day, I hiked into the Irish Wilderness, above the Wild & Scenic Eleven Point River. Here was where Quantrill’s Raiders once launched their murderous bushwhacking campaigns and where the Jesse James Gang formed.

I probably looked like a marching drum major, using a branch to sweep the trail of cobwebs. Returning from Fiddler’s Spring, I was chased by a nearly three-inch and definitely 10-legged spider—which maybe just wanted someone to chat with about everything going on in the world? Next, I drove through Gads Hill, site of the gang’s first train robbery in Missouri, on my way to the headwaters of the Current River, where they hid out afterward.

But something felt off in this hilly region known for quirky and isolated locals. Trucks flying massive confederate flags seemed to be patrolling the highways. The campgrounds were overflowing with typical summer crowds, but strangers who normally kept a polite distance were getting closer to one another than usual. Like they were overcompensating. I could almost see viral mists forming in the few feet between talking mouths. 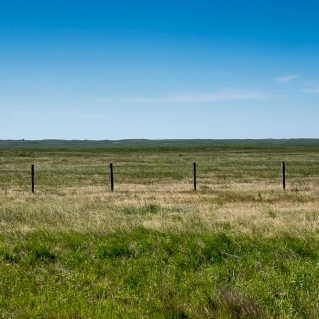 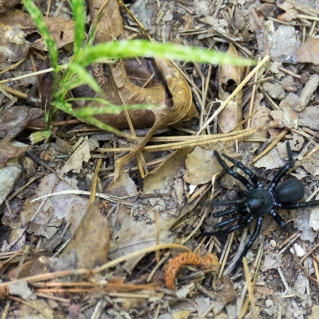 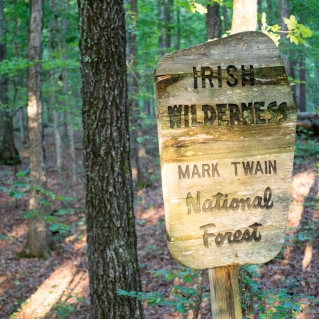 When I pulled into the bustling parking lot of Meramec Caverns on my fourth day, the tourist crowds streaming in and out of the famous hideout cave were way too much after months of isolation. This whole state seemed about to blow up, virally speaking, so I hit the gas and peeled out, heading northwest. (Sure enough, a few days later, Missouri spiked.)

That night I camped at Rock Creek Station, a restored Oregon Trail ranch where Bill Hickock shot and killed David McCanless to become Wild Bill. Then I drove north to join Nebraska’s Outlaw Scenic Byway (NE-12) near the town of Ponca. I spent my sixth night next to a bluff on the banks of the upper Missouri River before pushing east toward Valentine.

A quick detour toward the ghost town of Meadville took me downhill away from flat farm fields into the lush hidden canyon of the Niobrara River. During the outlaw era, rustlers like Doc Middletown would hide stolen horses in the breaks (aka side gullies) of the Niobrara, like the one the road descended. 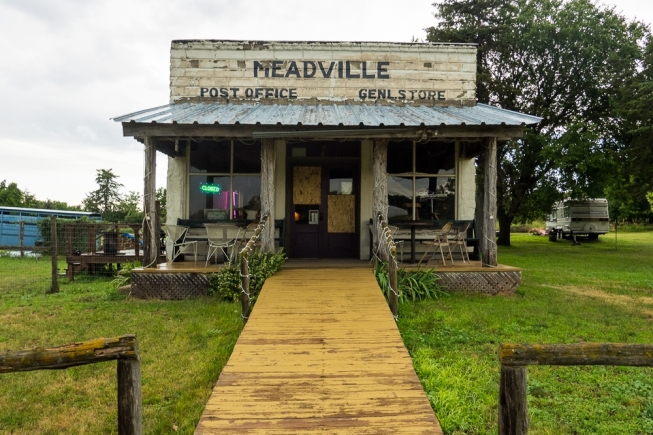 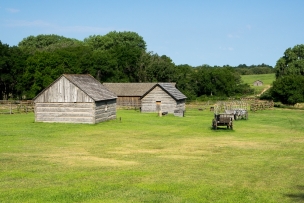 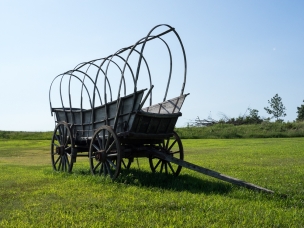 A sudden thunderstorm caught me while driving the clay road, which turned to clay soup under my slipping tires. At one sloppy spot, I almost skidded into an embankment. Luckily, the truck kept mud sliding down the final hill to the braided river, which was the downstream portion of the Wild & Scenic section.

After waiting for the road to dry, I went to Smith Falls State Park and set up camp in the walk-in riverside area. Two couples were coming off the river. The young leader of this group was originally from the southeastern Ozarks, now relocated to Kansas City. We struck up a conversation about lives and pandemics and rivers.

“We’re naturalists,” he declared, cataloging the wildlife they saw while canoeing through the Fort Niobrara National Wildlife Refuge. Most typically, otters, falcons, deer. Though even the occasional bison has been spotted.

Heck yeah, you’re naturalists, I thought, impressed by their earnest passion for the outdoors. They’d paddled a 25-mile day trip. With a sporty gradient for a float stream, the Niobrara moves so swiftly there are often small standing waves running down the center. 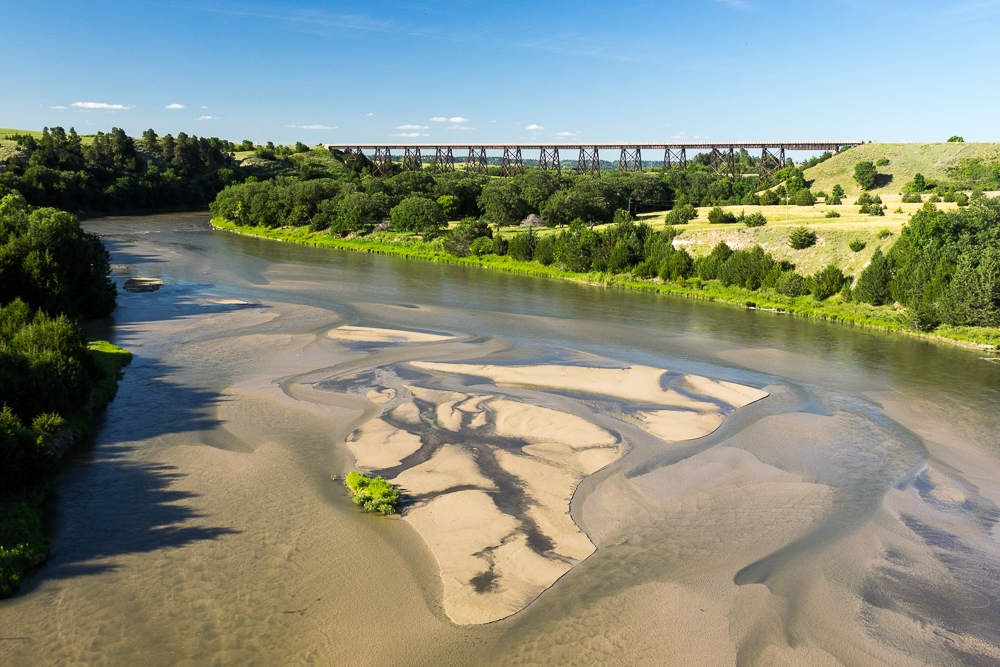 That evening, when I waded into the current for a swim, I felt sand and stones shuffling past my ankles along the river bottom. As the sun set, I watched a single paddler, with a dog in the bow, float under the historic railroad bridge.

The next morning, I launched my NRS Quiver from Cornell Bridge into the wildlife refuge. For the upper 30 miles, the river is channelized in a canyon-like setting, passing through Western Nebraska’s picturesque sandhills. It’s green from ponderosa pines, cottonwoods, birch, and aspen trees. Sandstone cliffs break up the vegetation and yield one of the best features of the Niobrara: the many waterfalls. 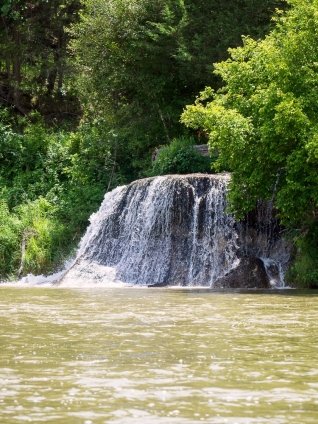 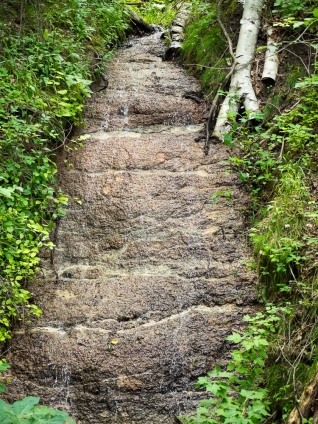 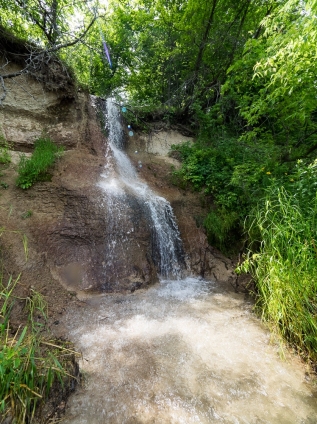 Yes, you read that correctly. Along the 75-mile Wild & Scenic section, over 200 waterfalls drop into the river. The reason is that this canyon—especially on the river right side—cuts through the Ogallala Aquifer.

Joining me for this midweek waterfall extravaganza were a few dozen other floaters. Most of them lounged in inner tube flotillas, while some opted for kayaks, and others bounced down on inflatable couches or inside plastic tubs, which resembled Old West bathing barrels. They oohed and ahhed, mostly after opening light beers. But, also, the waterfalls. We took turns paddling beneath and feeling the cool mist that offered relief from mid-80s air temps.

The biggest and tallest waterfall in Nebraska is Smith Falls. It plunges 63 feet over a Rosebud sill. It’s a common stopping point for float trips and my take-out. After riding a mostly shade-free bike shuttle, I returned to camp. I went to my usual swim spot for the sunset. Once again, that same mysterious paddler and dog lazily floated downstream through the shadowy dusk.

It was my day off after a week of constantly moving. I did camp chores before hiking the short nature trail. The path looped up from the river, past yet another waterfall, and circled the edge of the plains. From above, you’d never suspect there was an Eden-like valley below—nor a raging pandemic beyond the horizon.

That evening, I had new neighbors. Three college guys who were the happiest, most chuckling trio of friends I’d ever met. They constantly helped each other: fetching water, setting up their tents, grabbing another beer.

“I’ll get it!” they shouted while racing each other to the cooler. 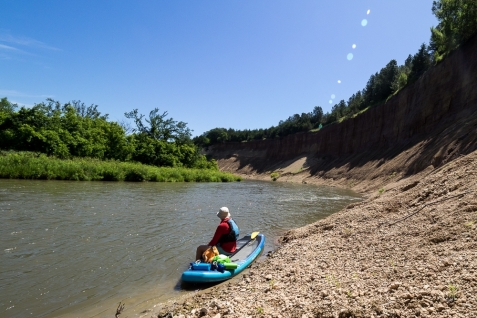 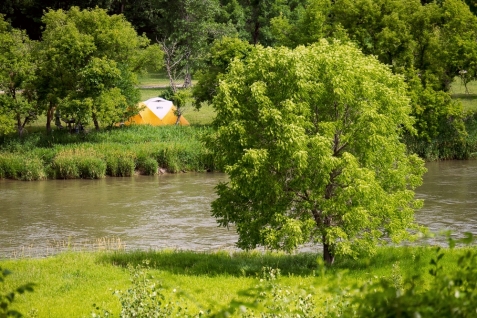 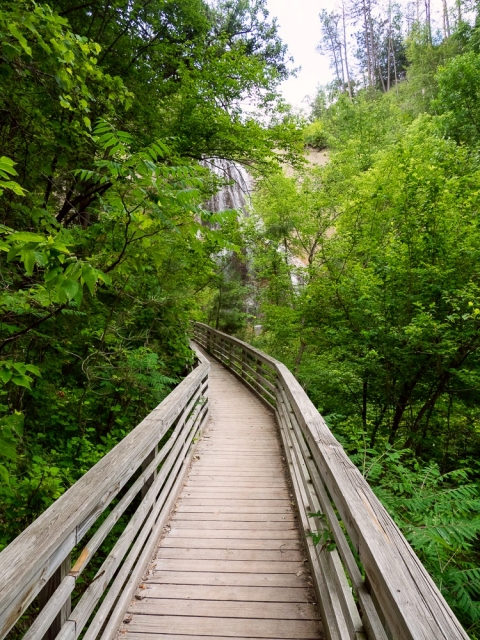 At dusk, the same mysterious paddler and dog came down the river again. This time they hopped out on a midriver sandbar, newly formed from steadily dropping flows that are typically floated from mid-June through Labor Day. Everything felt about as far from a downward spiraling America as could be.

The next day, I wanted to run the lower river. But while loading my bike, I discovered a broken spoke—maybe a rock strike during my shuttle? Now the wheel was too bent to ride. Plan B was a driving tour, first checking out the Cowboy Trail south of the river. When completed, the 321-mile cross-Nebraska rail-trail will roughly follow the route of the world-famous Chadron to Chicago Horse Race of 1893. 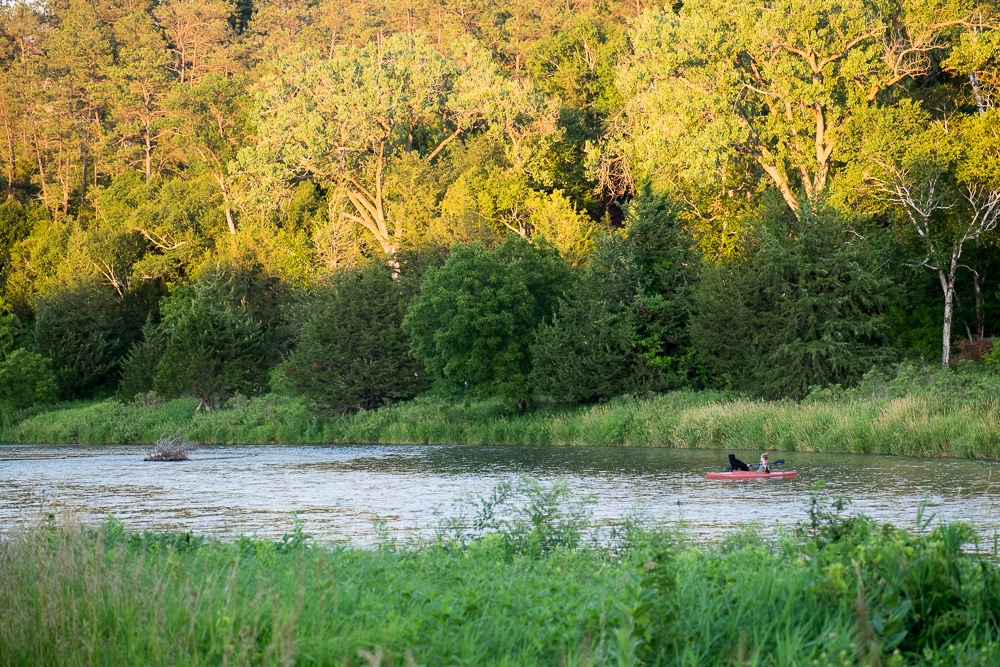 Sponsored by the town of Chadron and Wild West Show creator Buffalo Bill Cody, on June 18, 1893, nine riders—with nicknames like Rattlesnake Pete—set off from Western Nebraska. The whole idea began as a practical joke, but the 1000-mile race was serious business.

Eight hours less than two weeks later, an exhausted rider named John Berry arrived at Buffalo Bill’s tent at the Chicago World’s Fair, having average 70 miles per day. Only a handful of riders legitimately finished. Doc Middleton, who had gone straight in recent years, dropped out and took a train to the finish line. He returned to a life of crime not long afterward.

Driving the road along the lower river, I crossed into the Niobrara Valley Preserve, managed by the Nature Conservancy. Down here the river passes through several class II rapids, a class III, and ends with a Class IV waterfall that most paddlers portage. 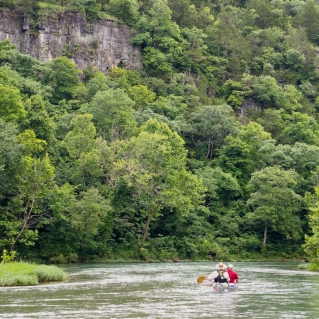 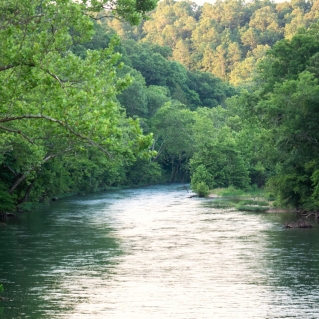 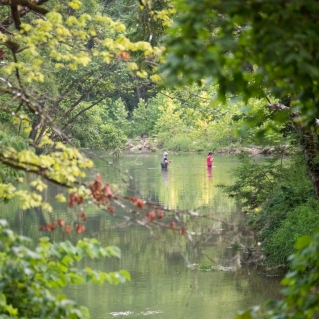 At the Norden Bridge, I met a dirtbag canoeist, sometimes raft guide, frequent through-hiker, van lifer for life. He came over for dinner and told me about getting kicked off the Arizona Trail at Grand Canyon. So, he went paddling. Like everyone I met, he’s concerned about the country. He’s debating two options. Either bugging out to off-grid Alaska or, maybe, he’ll hike the newly created Great Plains Trail.

It was my final evening at the Niobrara. The same paddler and dog made their nightly appearance. The next morning, I meet the manager of the state park and realized she was the mystery floater. It was an unexpected five days, much longer than I’d expected to stay. A surprisingly beautiful place which reminded me that we often think we know the most about the places we know the least.

I didn’t know what would happen when I left the valley and returned to pandemic reality, but I did know one thing. When it came to the Niobrara, and Western Nebraska in general, I would definitely be escaping here again.