The first time I spotted a sign for Awendaw Creek was a few years before we finally paddled there. We were doing what most visitors do in this part of South Carolina’s Low Country, zipping 70 mph down Highway 17 through a box canyon of longleaf pine trees.

We were passing through Francis Marion National Forest, on our way to check out one of the oldest historic districts in the U.S., founded in 1670 by King Charles II. While the region between Georgetown and Charleston was definitely scenic, with matchstick pines, cypress swamps, and blackwater rivers, we didn’t think about stopping along the way.

My wife and I had recently relocated to a college town near Myrtle Beach, and I wasn’t exactly thrilled with the move. I grew up out west, and my interests lie mostly in mountainous regions, where one could plummet down rapids in a kayak or bomb down a trail on a bike.

As far as I knew, no one ever came back from a place called Low Country blurting things like: 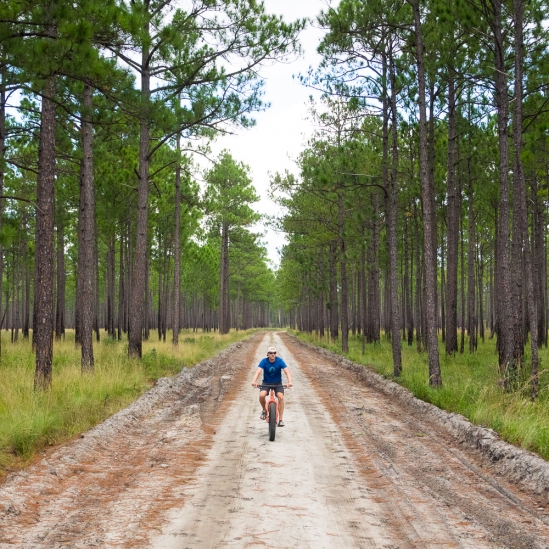 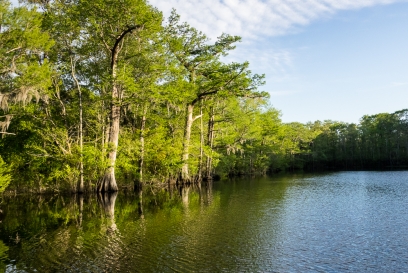 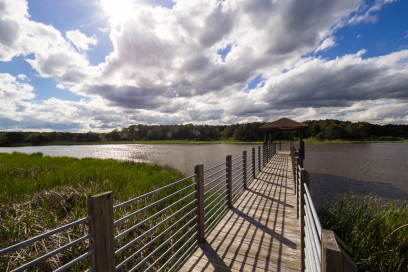 Frankly, I didn’t give the Low Country region enough of a chance at first. Not long after moving, I thought I’d identified all that appealed to me. A section of the Waccamaw River for paddling. A beachside state park and inland wildlife refuge for hiking. A local dunes trail for mountain biking. And a suburban neighborhood where I rode five-mile laps on a road bike until my brain went numb. First chance I got, I hit the road heading west.

Then, 18 months ago, a friend mentioned a place I’d never heard of called Cumberland Island National Seashore. Five hours south I paddled to a near-wilderness barrier island of tangled live oaks, Spanish moss, undeveloped beaches, and sandy roads and trails. On the drive home, I wondered what else was hidden between developments? The first place I wanted to look was the Low Country area we’d been skipping past, where I’d seen the intriguing sign for Awendaw Creek. 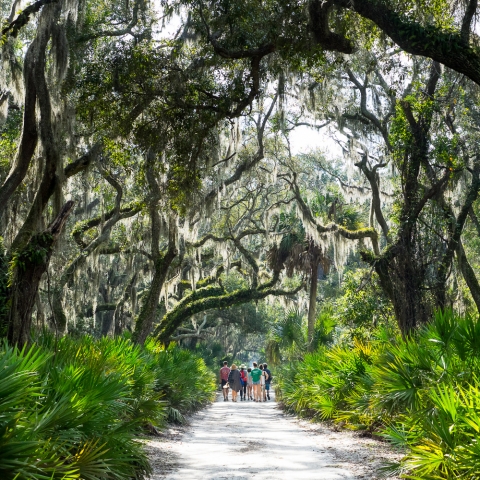 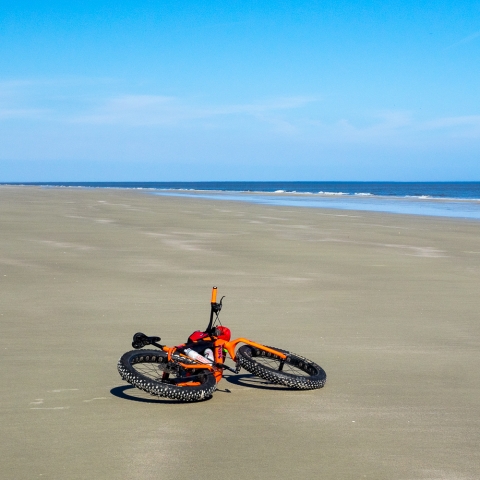 My wife and I arrived at the canoe launch on a sunny Saturday the following February. It was the type of warm morning when better-known put-ins across the country would be swamped by boaters, but we were the only paddlers in sight. There wasn’t much to suggest a topnotch paddling destination. The floating dock was damaged, with one corner jutting upward and the other underwater. A reminder of hurricanes in recent years and the fact that, in Low Country, first impressions can be deceiving.

Inky blackwater engorged the Awendaw Creek channel, which was barely moving in the upstream direction due to the peaking tide. It didn’t look particularly inviting for paddling in our intended direction, toward the Intracoastal Waterway. But any minute the tide would start falling, and the current would move downstream, snaking through plains of golden cordgrass. Until then, we readied our gear and waited for the switch. 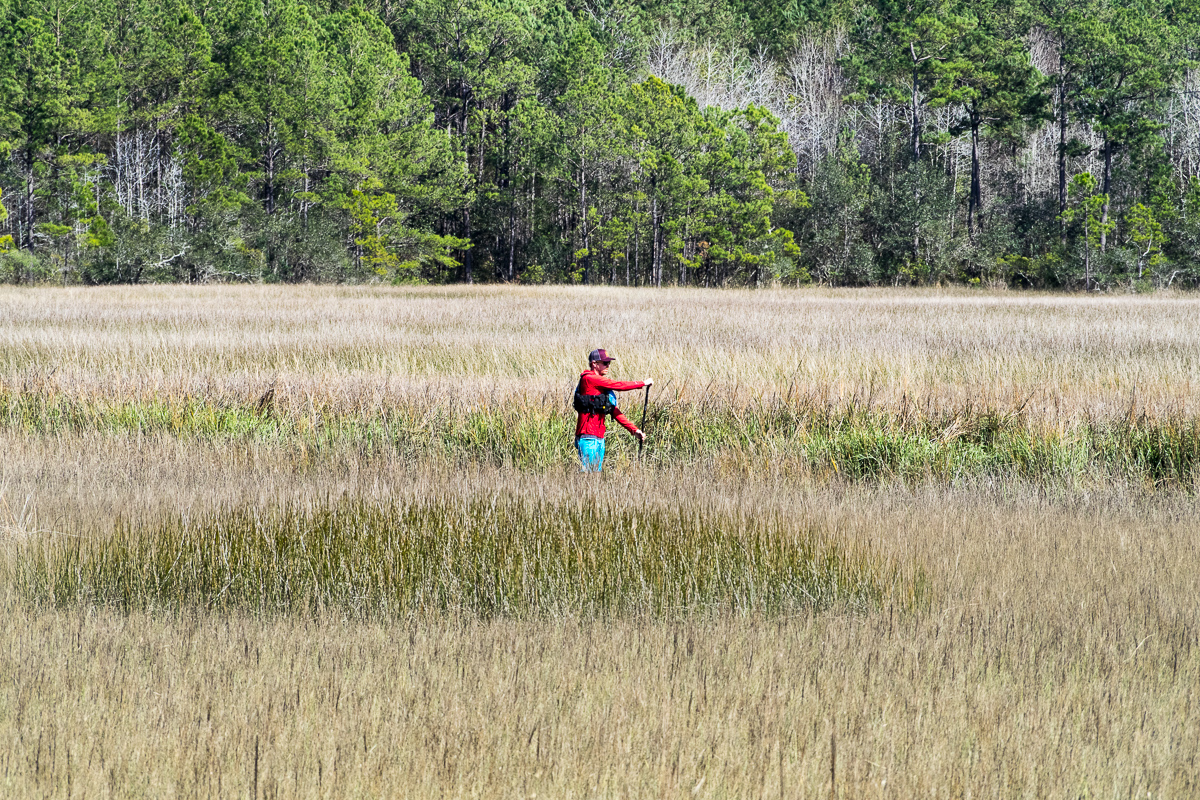 The reddish-black color of the surface waters in Low Country isn’t from suspended sediment, nor a sign of pollution, but caused by tannins from decaying vegetation in the swamps. Blackwater rivers are most common in the Amazon and the Southern U.S. The water is high in acidity and low in nutrients. While it might look dirty, blackwater is lower in bacteria than most clearwater streams. For this reason, blackwater was carried in casks by early sailing ships for drinking supplies because it tended not to spoil.

As we paddled away at 10 am, the current moved sluggishly downstream. Coming from a river running background, figuring out a tidal creek took some mental effort. Along the Southeastern Coast, there are four tides every day. Two highs and two lows, with a range of about four to five feet in Low Country. Each rising or falling tide lasts six hours, and the bulk of water moves through during the middle third of a changing tide when the current is fastest in either direction. 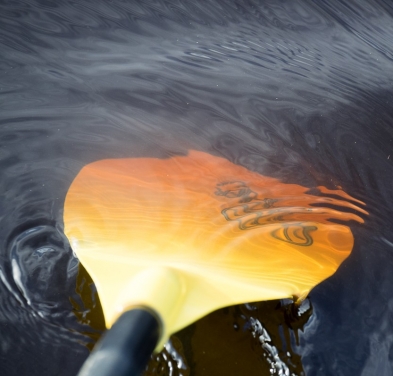 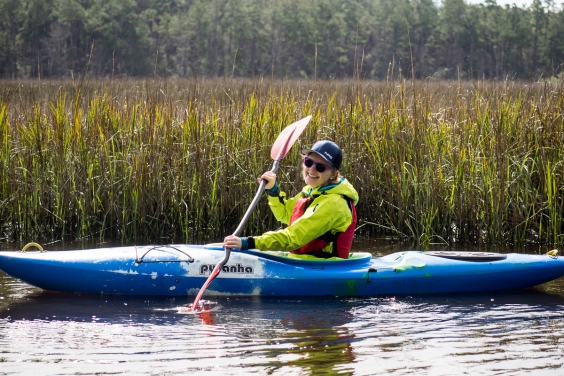 While pumping up my paddleboard, I’d noticed the tide switched at the canoe launch around 9 am, meaning the current would move fastest downstream from 11 am to 1 pm. Sure enough, our first hour moved lazily downstream through sweeping meanders between pine forests. Herons circled, fish jumped, and I checked out a narrow side channel before thinking twice about alligators and hustling back out.

Several times we passed beneath the Awendaw Passage Trail on the creek-left bank. The previous month we’d hiked the trail and decided it was one of the most scenic we’d seen in the area. I returned to bike the seven miles and continued on the 44-mile Swamp Fox passage deep inside Francis Marion National Forest, where I crossed a bridge over Steed Creek, the headwater tributary of Awendaw Creek.

Paddling downstream, the current quickened and the water level dropped. This revealed the cordgrass roots, mud banks, and eventually loamy flats covered by oyster reefs. Occasionally, a slightly elevated island of hardwood trees would rise up from the marsh grasses. These small islands are called shell middens, made by Native Americans who piled oyster shells above the high tide level. Archeologists are uncertain about the precise purposes of these elevated platforms. They were probably created for a few reasons, including fishing, camping, religious ceremonies, harvesting oysters, and collecting refuse.

Passing beyond a few mid-channel oyster beds, a green navigation marker was visible in the distance. From our creek-level vantage point, it was tough to spot the Intracoastal Waterway. A passing tugboat looked like it was plowing through tallgrass. 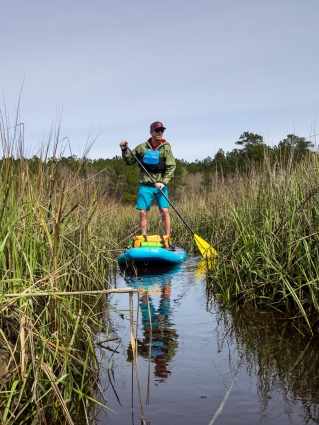 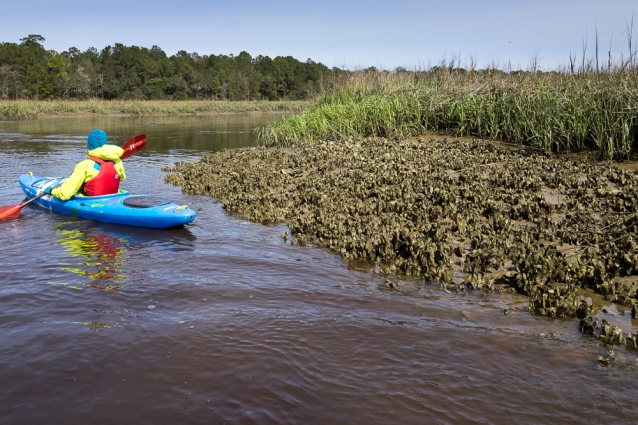 The Intracoastal Waterway is a series of channels, bays, and dredged canals that stretches 3,000 miles from Massachusetts to Texas. Through Low Country it follows the tidal rivers and inlets between the mainland and the barrier sea islands. Thinking back on my past two visits to the ICW—one time paddling to Cumberland, the other time taking a ferry to hike around nearby Bulls Island—a memory flashed.

My wife perked up curiously as we rounded a corner and entered the waterway. Not much seemed to be happening at low tide. A few fishing boats floated a few miles away. In front of the nearby campground of local paddling outfitter, Nature Adventures Outdoors, a floating dock rested on a mudflat. A single pelican soared across the channel, and a few bored cormorants tried to look busy. 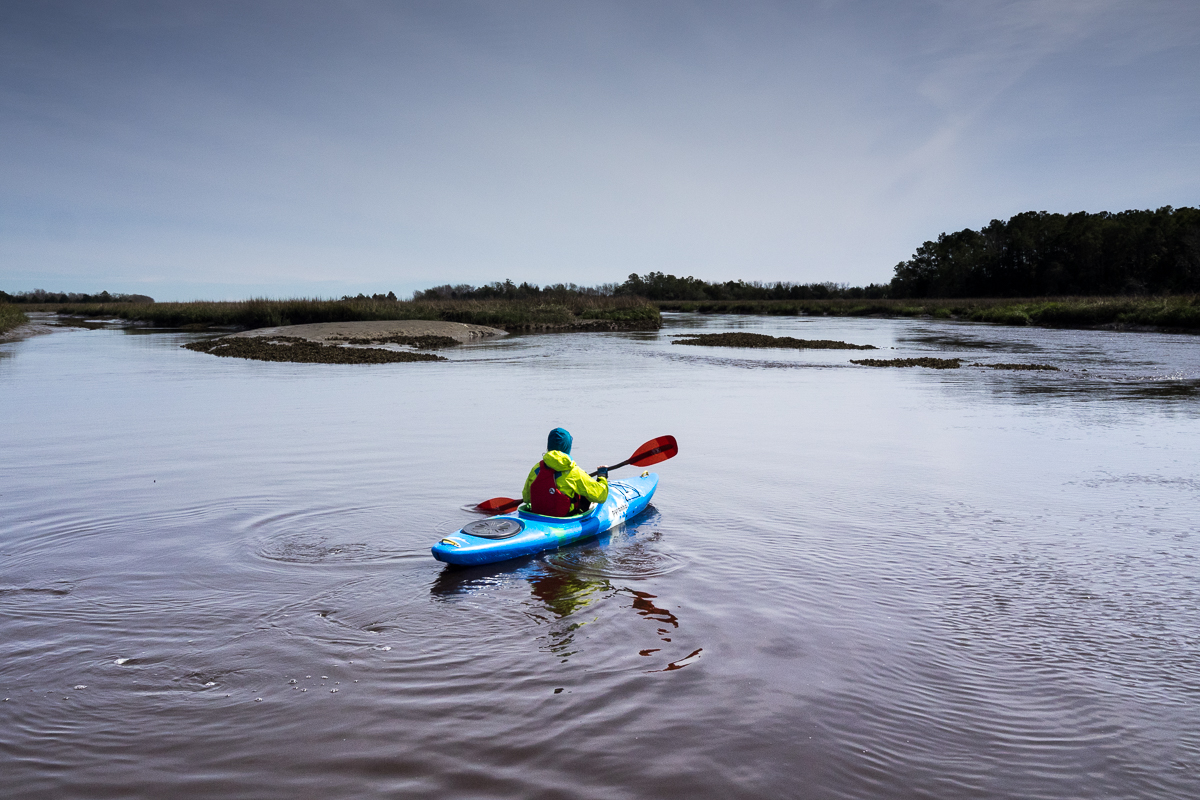 Standing on my paddleboard, I could see our intended lunch spot at the Buck Hall Recreation Area about a mile away. There were two shapes coming our direction through the water.

Two bottlenose dolphins were swimming directly toward us, their fins rising every twenty feet. Approaching close, they diverted from our path and circled around playfully for twenty minutes, before continuing their swim south. 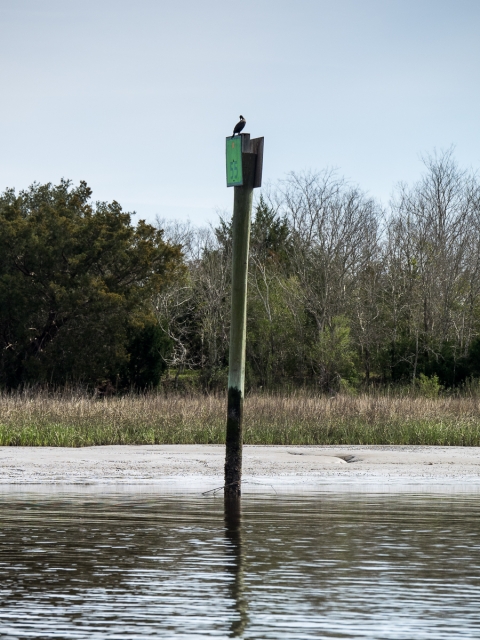 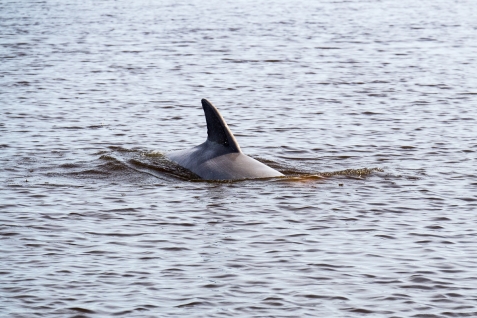 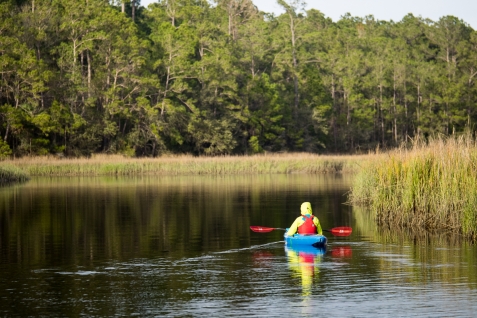 We paddled to Buck Hall and had lunch on the bluff, while waiting for the current to switch directions so we could paddle back upstream with the rising tide. Awendaw Creek had proven it was definitely worth the trip, and while driving home we made plans for where to go next.

In early March, we went back and tried paddling up Awendaw Creek into the swamp. But the day was even warmer. After a mile, we startled a six-foot gator who was sunning on flattened grass in a narrow section of the channel. After watching it move into an adjacent side channel, we decided not to paddle past its hiding spot and went hiking instead.

In mid-March, we drove into the forest and checked out the Wambaw Creek Wilderness Canoe Trail. Being farther inland, the tidal effect here was noticeable but less so than Awendaw. The creek was running high out of the swamp, still falling after winter flooding on the connected Santee River, with rings of pine pollen on the tree trunks.

On a Sunday at Wambaw Creek we were once again the only paddlers. Saw palmettos grew at water level. Massive cypress trees loomed overhead, some of which were just starting to glow lime-green from the needle-like leaves which bud in early spring and fall in early winter. 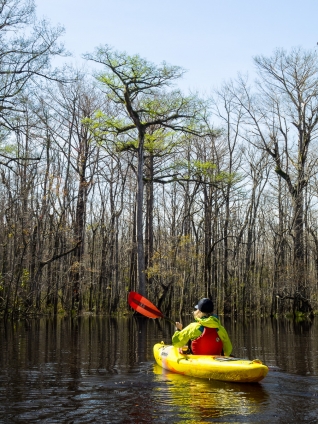 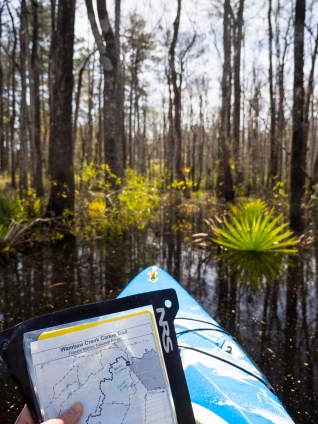 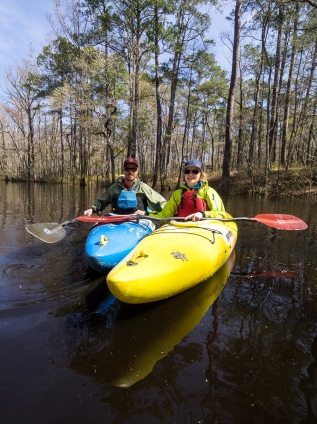 Coming around a bend, there was a downed tree blocking the channel and a gator sunning motionless on a log. But this gator didn’t even blink, nor move. So, we quietly backpaddled away and called that our turnaround point.

Afterward, we visited Hampton Plantation State Park, touring the mansion and slave quarters and hiking the abandoned rice fields. The park guide told a story about the forest’s namesake, revolutionary war hero Francis Marion. In the early 1780s, he led a ragtag militia in Low Country against the British, boating rivers and creeks between towns and hideouts.

One time, Marion stopped by Hampton Plantation for supplies and fell asleep in a rocking chair. When a British patrol approached, Marion snapped awake. He ran out the back door, swam across Wambaw Creek, and hid on a nearby island until the patrol had left. Today, there’s a dirt boat ramp by the spot, which is occasionally visited by kayakers coming down the Wambaw or Chicken Creek Canoe Trails. 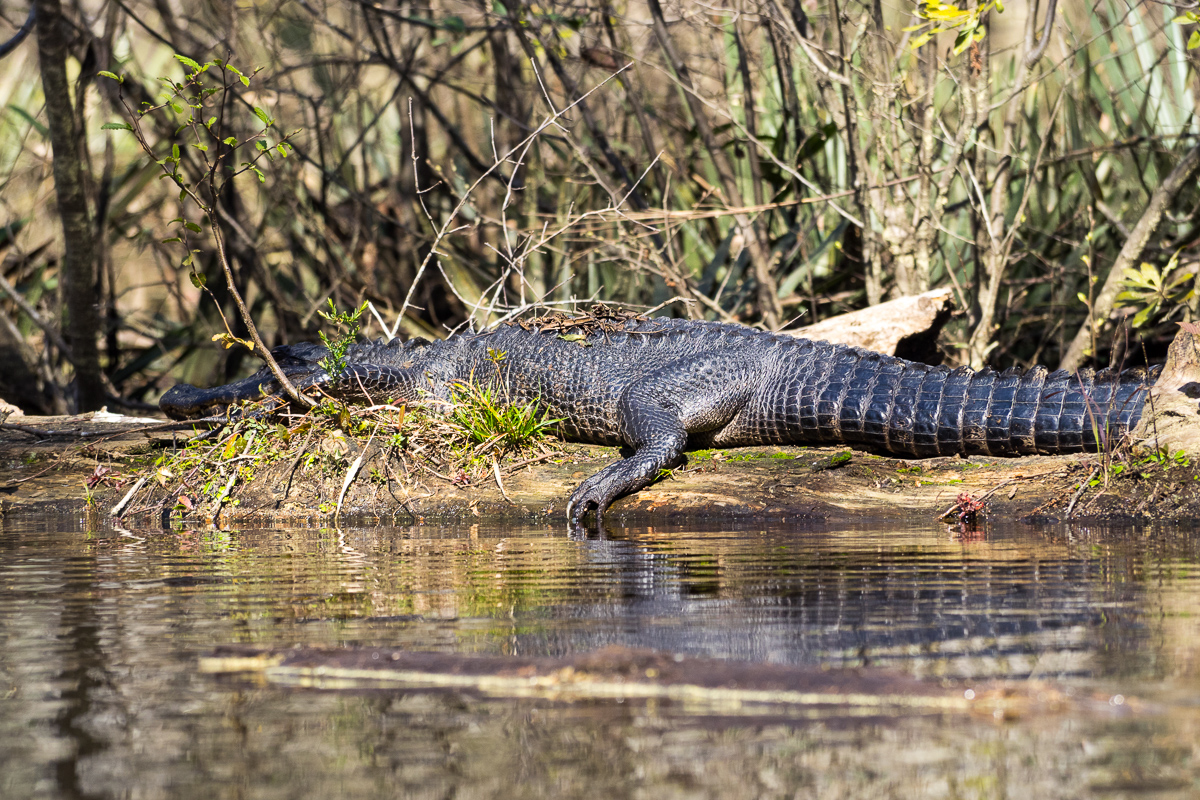 We finished the day with a hike out to Battery Warren, a Civil War fort on a bank of the Santee River. Between earthen mounds, Confederate troops in the 1860s mounted cannons to protect the railroad crossing at Jamestown, 10 miles upstream. The fort never saw battle, and today there’s a small interpretative site and yet another little-used canoe trail passing by, which starts on Echaw Creek and finishes at the next landing below the fort.

Spring was in the air, along with something else—mosquitos and gnats. Rising temps would lead to relentless biting insects in the swamps. Some paddlers use repellants and keep boating here through the summer. Others stick to the inlets and coastal waterways, like Awendaw, where frequent winds help reduce the bugs. Soon, I’d be heading west for work. But having discovered even more new trips, there was paddling to look forward to when I returned.