Steak and Potatoes on the Rogue

I wake to the chirping of an osprey chasing an eagle. After starting the water for coffee, I gaze upon the low fog, rolling down the Rogue River, and take in our surroundings.

The beach where my wife and I are camped is not on any guidebooks. And though we are sharing the river with multiple commercial and private groups, there is no one around us. The great thing about being a small trip is that even on a busy river, you can find private nooks where few people explore and fewer camp. 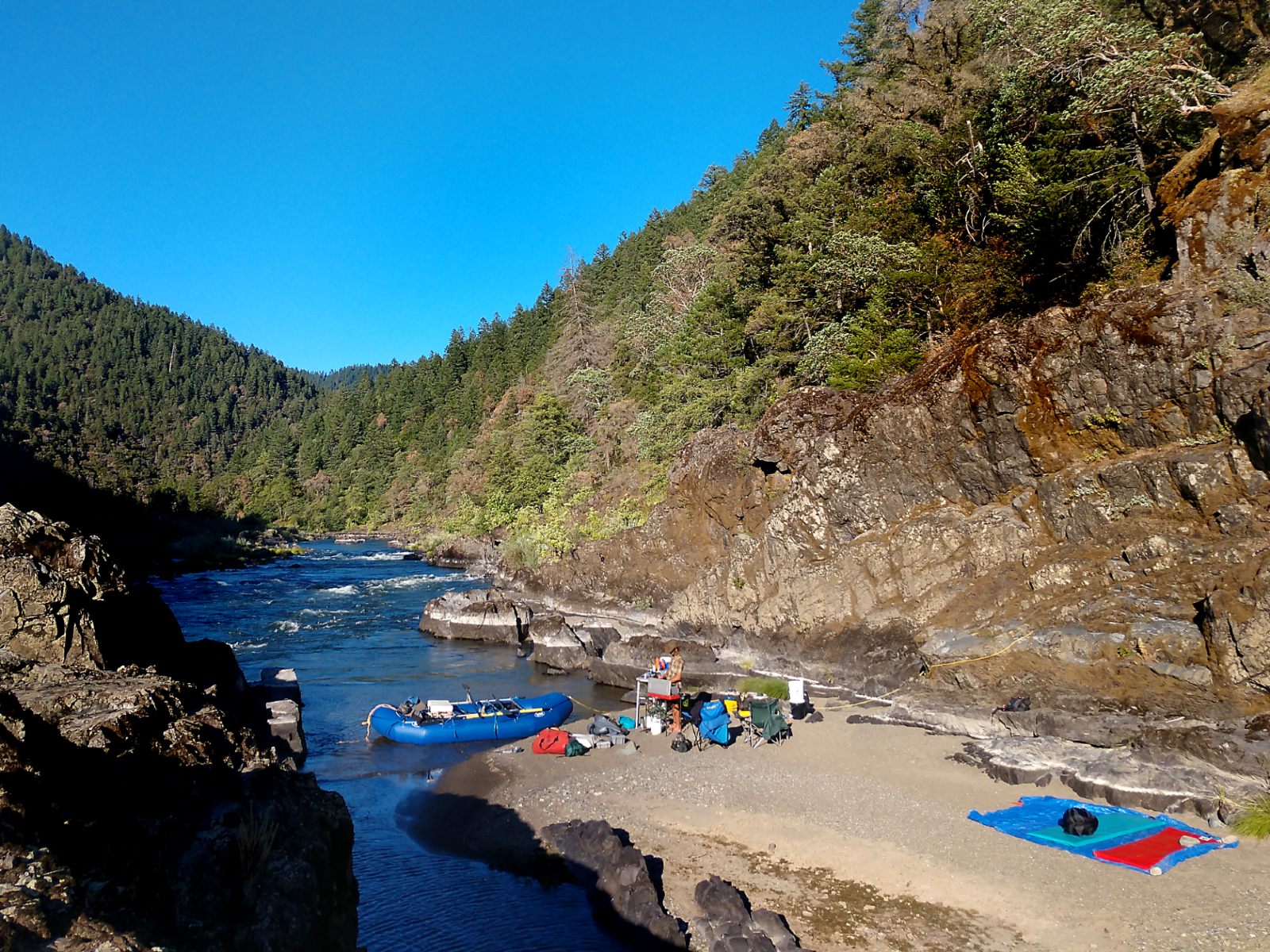 Of course, being a one-raft trip means we are more limited on space for camping equipment. But I made sure our kitchen box included a small Dutch oven.

Most people associate Dutch ovens with coals and campfires. But they also do great on the stovetop. Whether it be cast iron or aluminum, the heavy walls of the pot hold in the heat. And even if you don’t have coals, by heating up the lid of the Dutch oven on a burner, you can still take advantage of the oven’s ability to bake.

Our first night’s dinner is steak, potatoes, and vegetables all cooked in the same pot and topped with a homemade Chimichurri sauce. 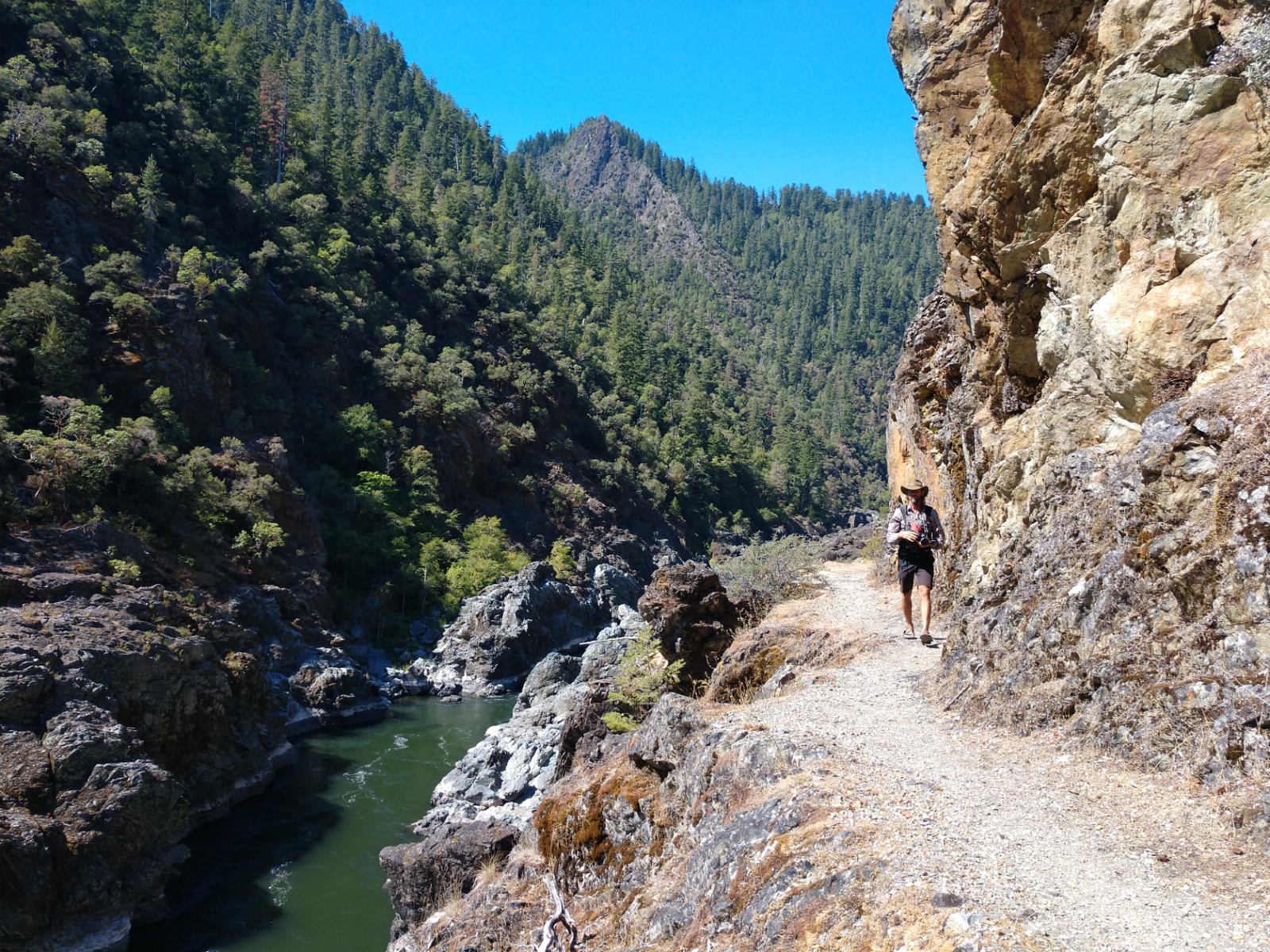 Chimichurri Sauce
Chimichurri is an Argentinean sauce used primarily on meat. Its core components are parsley, olive oil, and wine vinegar, but there are lots of variations on what herbs and spices are added. My version uses cilantro and relies less on the vinegar and more on citrus for its acidic punch. The result is a chimichurri that compliments fish and vegetables as much as it does steak and pork. 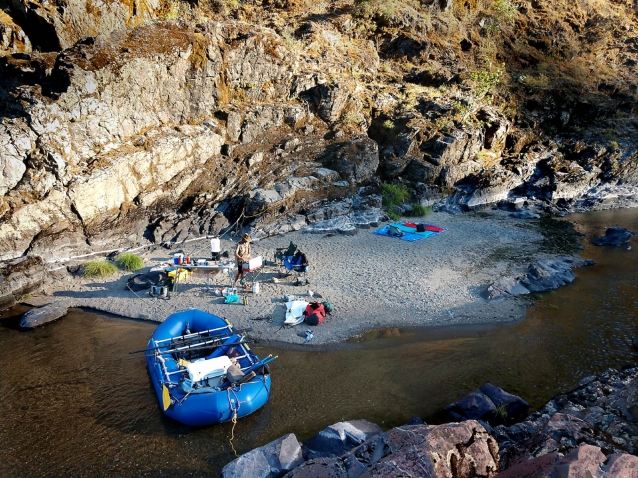 I prefer to make the chimichurri the day before the trip and store in an airtight container in the cooler. But it only takes five or ten minutes of slicing and dicing, so if I’m pushed for time, I’ll make it on the river.

Parsley and cilantro often come in bunches in the produce section. The size and quality of these bunches can vary.

First, chop the parsley with a knife. Then grab the cilantro by the stems and use a fork to comb through it, away from your hand, to separate the leaves from the stems. Chop the cilantro leaves. You should have slightly more parsley than cilantro. If you have any extra cilantro it makes a great garnish for other meals.

Combine the herbs and chop a little more until they’re well mixed.

In a large bowl, mix the herbs and remaining ingredients including the juice of one lemon and one orange. Stir until well blended. 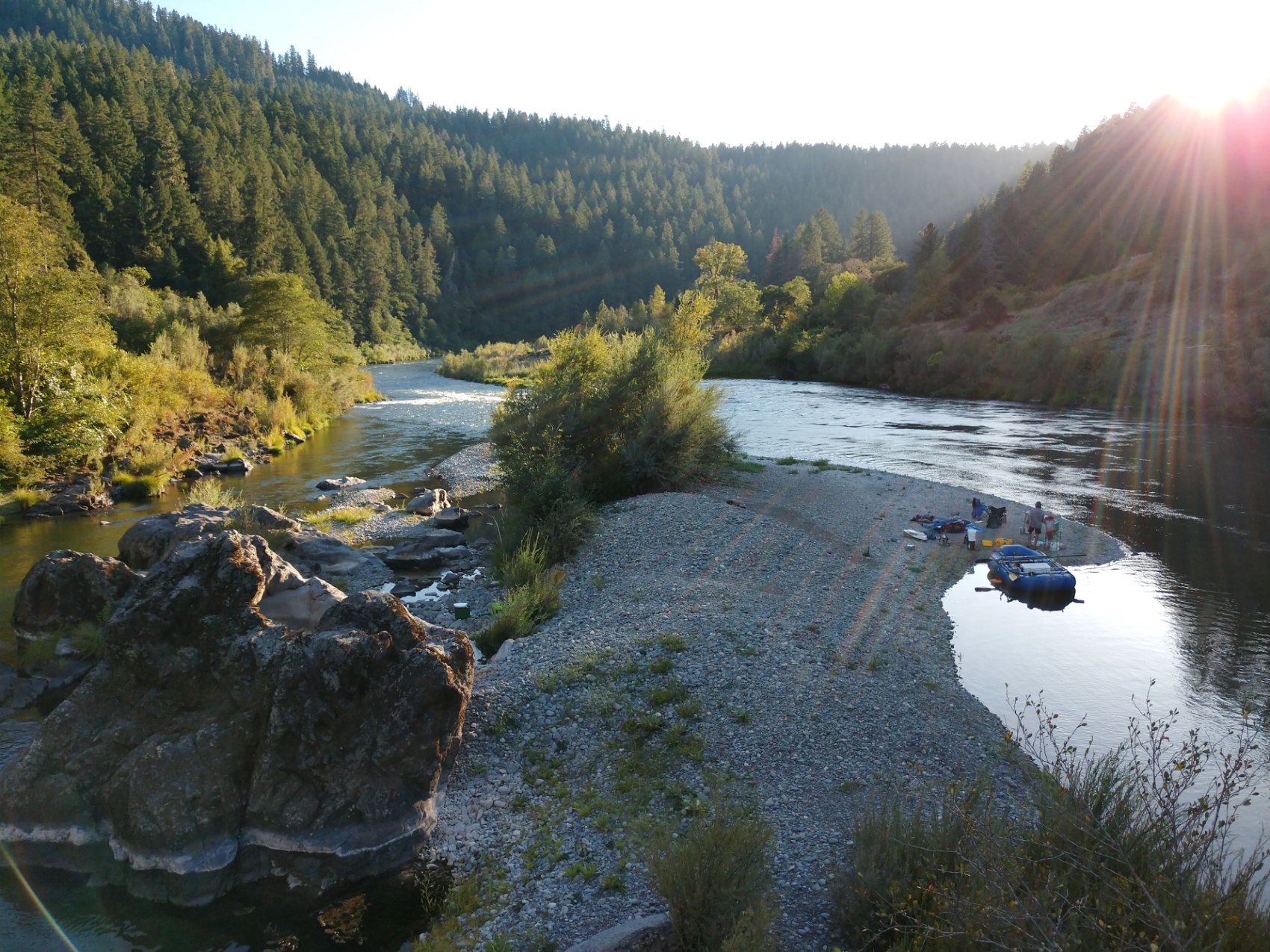 Steak
I typically use ¾ to one pound of steak. Liberally season the steak with oil, salt and pepper. Pan fry in Dutch oven flipping the meat as needed until it is cooked to rare/medium-rare. Place steak on a plate and cover with foil. The steak will continue to cook as it rests, so plan accordingly.

Potatoes
I used to have a problem with my skillet potatoes turning out mushy. But then I learned a few tricks to make keep them crisp.

Tip #1: Don’t boil the potato pieces before frying. If you’re cooking for a large group, you may not have a choice. But the drier your potatoes are before frying them, the better chance you have to get them crispy. If you have enough surface area in the pot, start with the potatoes raw and let the potatoes brown on one side before turning them. This is hard to do with a thin-walled pan. But the thick metal of a Dutch oven makes this task easier, and its tall sides can accommodate all the ingredients in one pot.

Tip #2: Don’t add the other vegetables too soon, because as veggies cook, they give off moisture, making your already cooked potatoes soggy. So, cook the potatoes until tender (and crispy), then add other veggies. 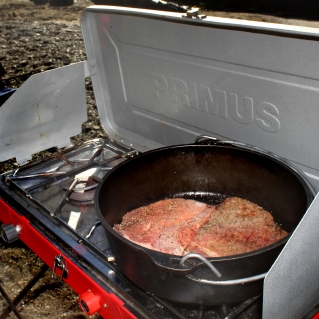 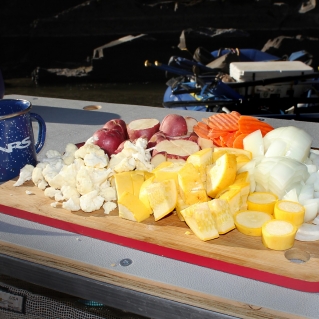 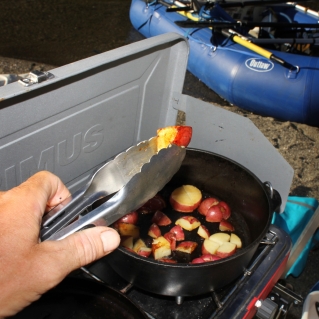 Even without coals, you can get the Dutch oven lid hot enough to bake the potatoes with a dry heat. Also, don’t skimp on the oil or the salt. The best way to ensure good seasoning is to keep adding a little more every time you stop and stir.

When you’re ready to start cooking, preheat both the pot and the lid by placing each on separate burners. If you only have one burner, you may be able to place the lid on the burner underneath the base of the Dutch oven and heat both at the same time. Cut the potatoes into large chunks. Scrape up any spots where the steak stuck to the pot and add oil. Season the potato slices with oil, salt, and and place in the Dutch oven, flat side down. Using a pot lifter, pliers, or thick hot pad, place the lid on Dutch oven. Remember whenever you go to lift the lid to check on the meal, it will be hotter than normal.

Let everything rest for a few minutes, then serve with chimichurri on top. 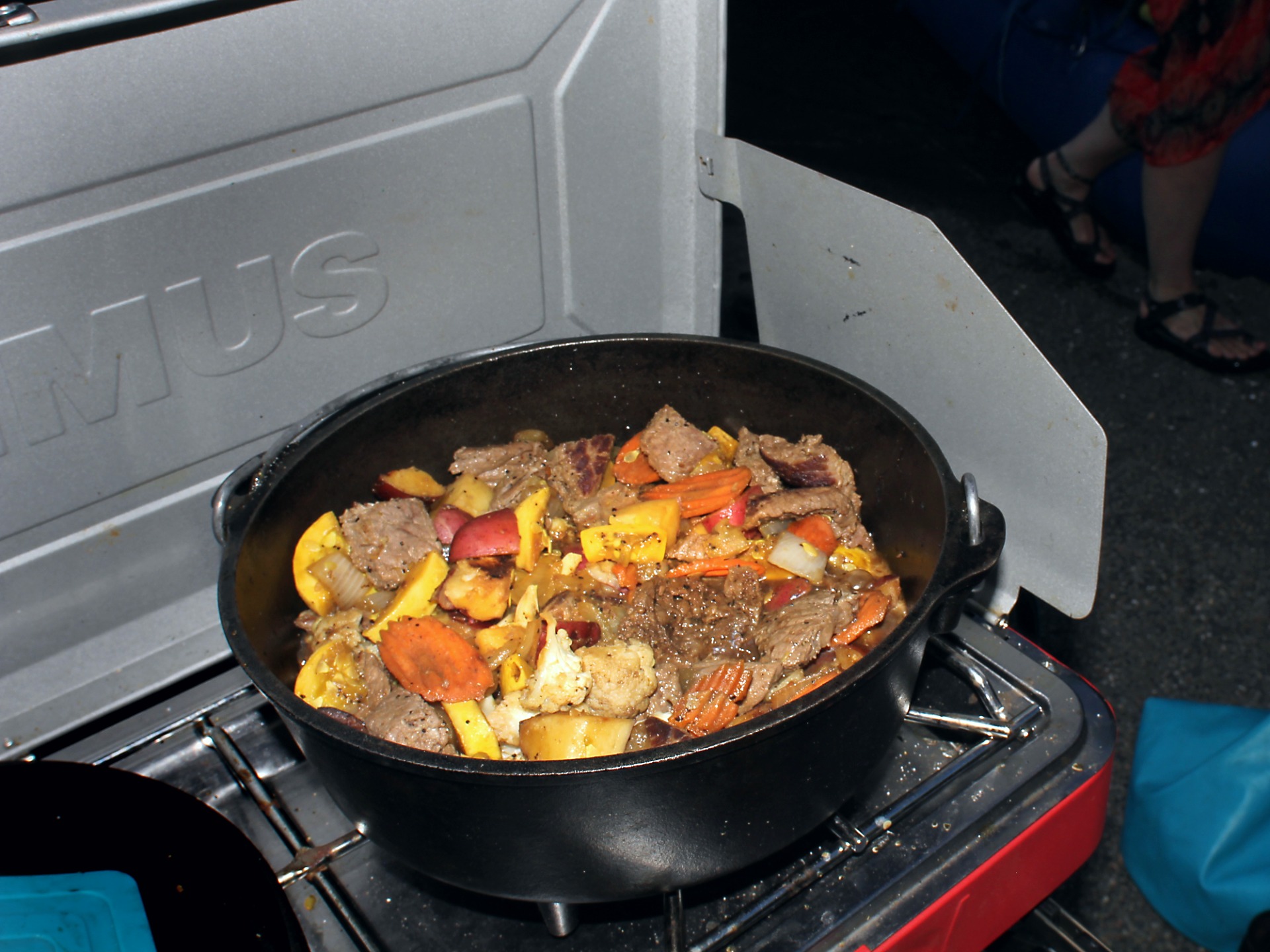 At our next camp, my wife and I awake on a small island upstream of Winkle Bar. Our only company is a flock of mergansers that seem upset at having to share their space. While the coffee is brewing, I wade out with my fly rod and try to get a few casts at the top of the gravel run. I am a better cook than I am a fisherman and lucky for my wife, I packed a well-stocked cooler.

This morning is another potato stovetop Dutch oven meal. 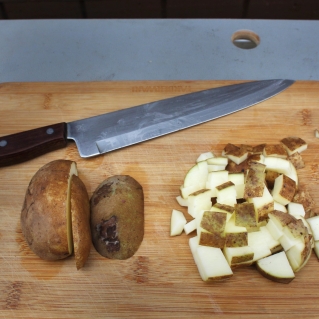 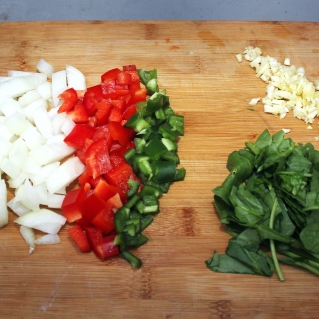 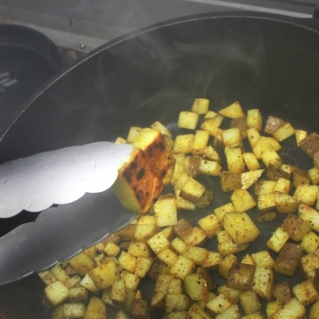 When I cook potatoes in a hash, I prefer to dice them small. Just as with the dinner recipe, start with just the potatoes. Season with salt, pepper, and turmeric, and let them brown on one side—three to five minutes—before flipping. Preheat the Dutch oven lid and place over the potatoes as they brown. As your stir, add more salt and pepper and cook for another two to three minutes. If you’re cooking a lot of potatoes, you will need to keep browning and stirring until the whole batch is mostly cooked.

Place the lid back on a burner to get it hotter while you prepare to add the eggs. If your Dutch oven has legs that keep it a higher off the burner, you may consider shuffling around the hash to make little nests for the eggs. If the base of the Dutch oven is directly on the flame, then crack the eggs on top of the hash.

Season one last time with salt and pepper, then place the lid on the oven. Check the eggs after three minutes, increase the heat as needed until your eggs are cooked to your liking. 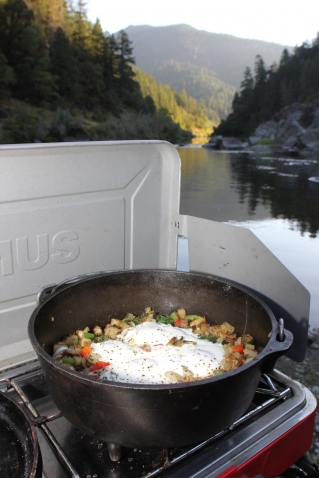 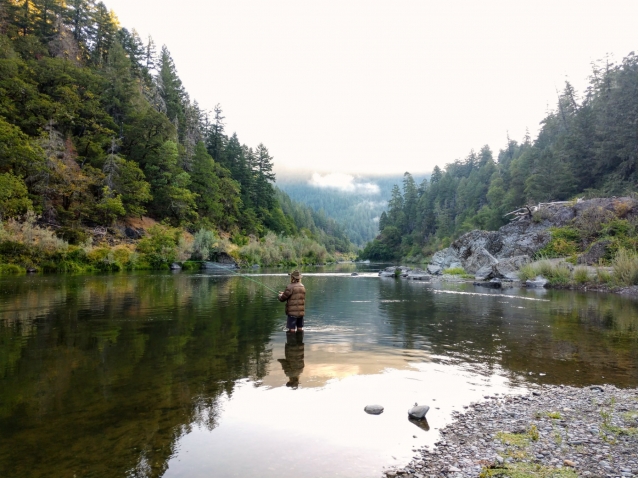 Dutch ovens are heavy and cumbersome, but they can be the most versatile pot in any kitchen. So even on rafting trips where you want to keep things small and simple, they are usually worth their weight.