Paddling as a sport is progressing more than ever. Paddlers are redefining what’s possible, running harder whitewater, doing bigger tricks and exploring more remote places. The sky is the limit as skills and gear continue to evolve to meet our growing ambition. What if, however, we challenge ourselves to progress in a new direction. Redefining what’s possible by asking, not what or where we can paddle, but who can paddle? 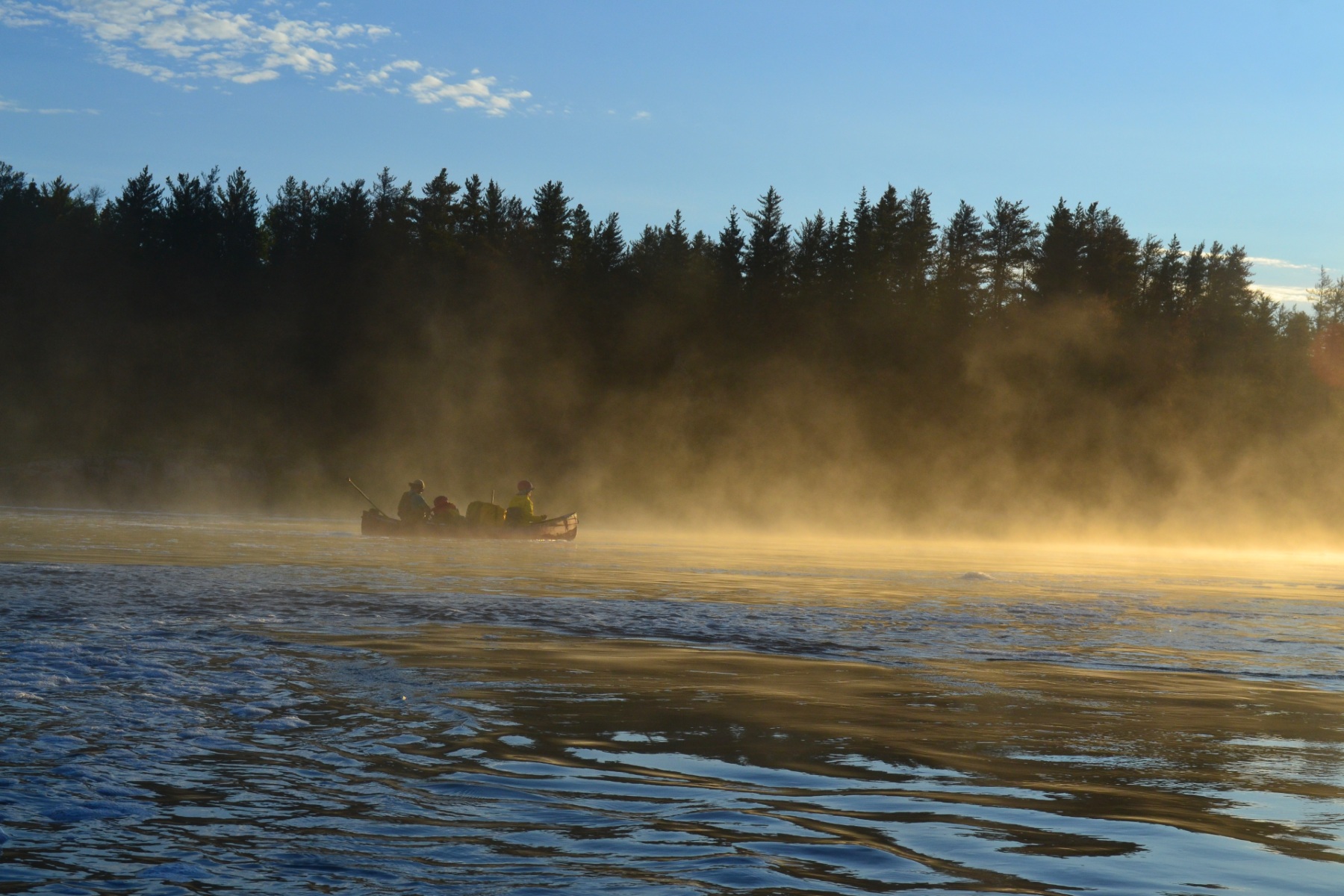 Colin and I unload our dry bags, food barrel and paddles from the truck and onto the gravel parking lot of the floatplane base in Bissett, Manitoba. The volume and weight of two weeks’ worth of food and gear looks impressive, but the prospect of fitting it all into a 17-foot whitewater canoe seems nothing short of daunting.

As the dockhand helps us move our gear toward the ramp, he skeptically asks, “You aren’t actually taking that guy down the river, are you?” He points to Rick, the 78-year-old man sitting in a chair on the deck of the float base. The dockhand has just watched us lift Rick out of the truck and support his weight on either side as he shuffled his way to his position.  We smile and nod, “Yeah man, he’s showing us down the Bloodvein River.”

The Bloodvein River is revered as one of the best whitewater canoeing rivers in Manitoba. It’s accessible via a floatplane flight to Artery Lake. It’s a Canadian Heritage River and forms part of the Pimachiowin Aki UNESCO World Heritage Site, acknowledged for its stunning natural beauty and cultural significance.  The river flows 225 kilometers from the Ontario border and cascades over approximately 80 rapids through wild and rugged boreal forest. 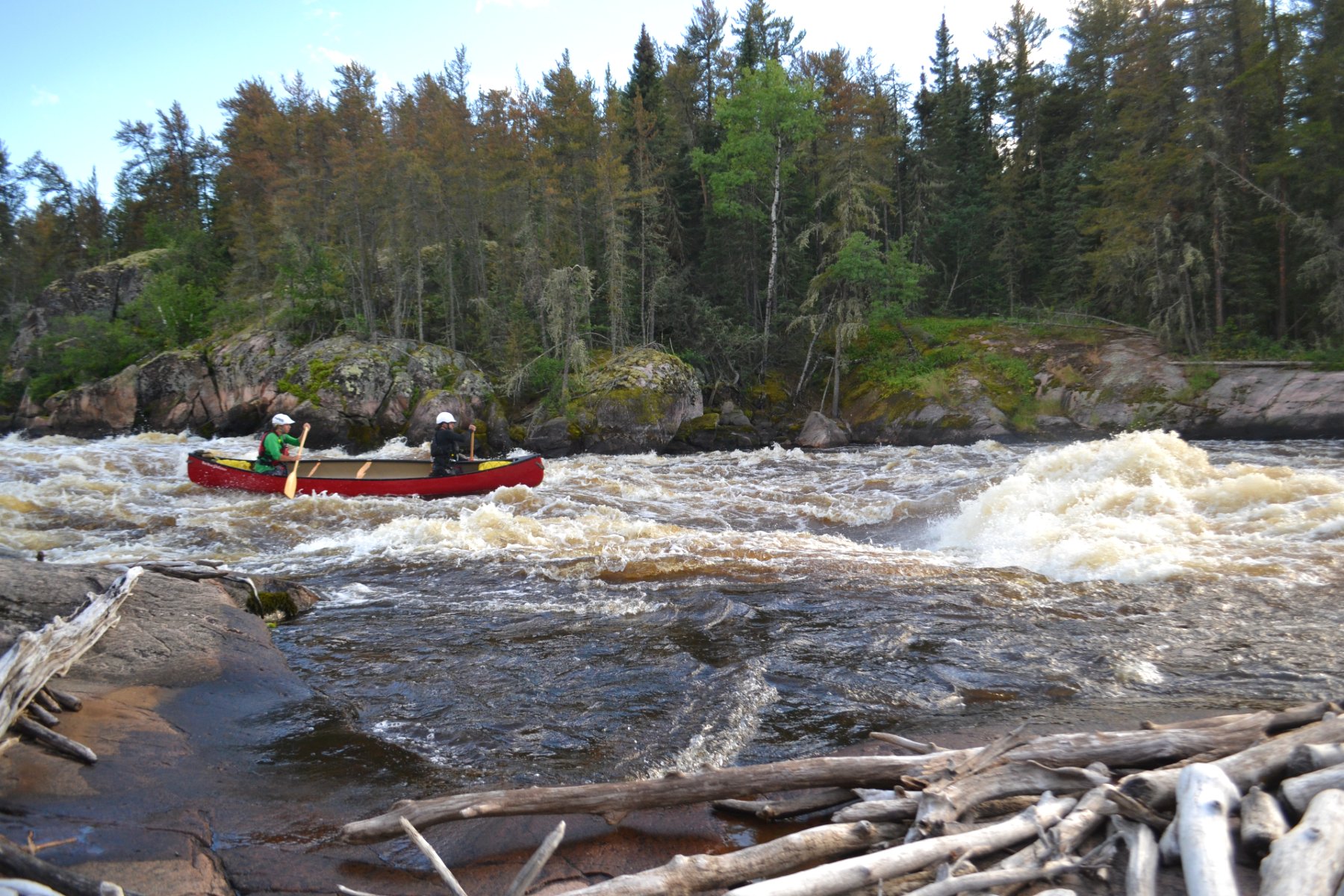 This may not sound like a place to be taking a 78-year-old man, but you see, Rick is not your average senior citizen. Rick has lived a life of adventure. Born and raised in Detroit Michigan, Canada has infatuated him since he was a kid. So much so, that he became a wildlife biologist and moved to Canada at the age of 25. His research has taken him all over the Canadian Arctic and Northern Russia, where he lived traditionally with Inuit people for years. He has lived in igloos and caribou skin tents while traveling with hunters on the land studying their ways of life. He has lived a lifetime of adventure and has more than enough incredible stories to fill more than a few books.

Just over a decade ago, Rick was diagnosed with Parkinson’s; he now finds it hard to talk and difficult to walk, yet he hasn’t let that slow him down. He and his wife Jill are committed to keeping the adventure going despite the disease. That’s where Colin and I come into the picture, as guides/caretakers we have been adventuring with Jill and Rick for almost four months now. The Bloodvein River, however, is our greatest undertaking yet. 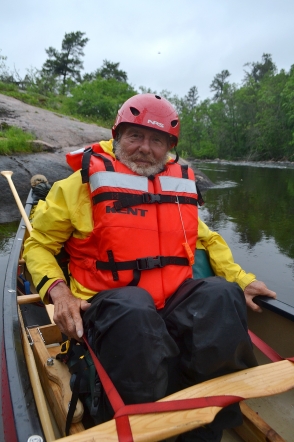 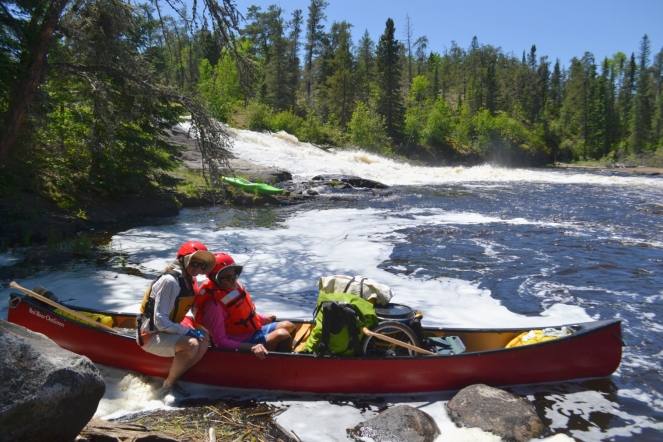 The turbo otter float plane pulls up to the dock, and Rick lights up when he sees it. He has spent much of his career flying to far off wild places in bush planes just like this one.  Colin and I quickly load our gear into the aircraft before heading back up the dock for our pal. With one of us on either side supporting his weight, Rick shuffles his way down the floating dock as it shifts beneath us in the wind and waves. The pilot and the rest of the staff stand back; we understand.  The scene is so unusual.

Colin and I share a look of uncertainty as we eye Rick’s next obstacle, the metal ladder that goes from the pontoon of the plane into its fuselage.  That ladder is a sobering symbol of the challenges ahead and for just a moment, we pause and look away to focus our thoughts and muster our courage.  When we turn back, Rick is up the ladder and in the plane with a huge smile on his face. In that moment, we know we are doing the right thing here. The plane takes off and before we know it, we are landing on Artery Lake. 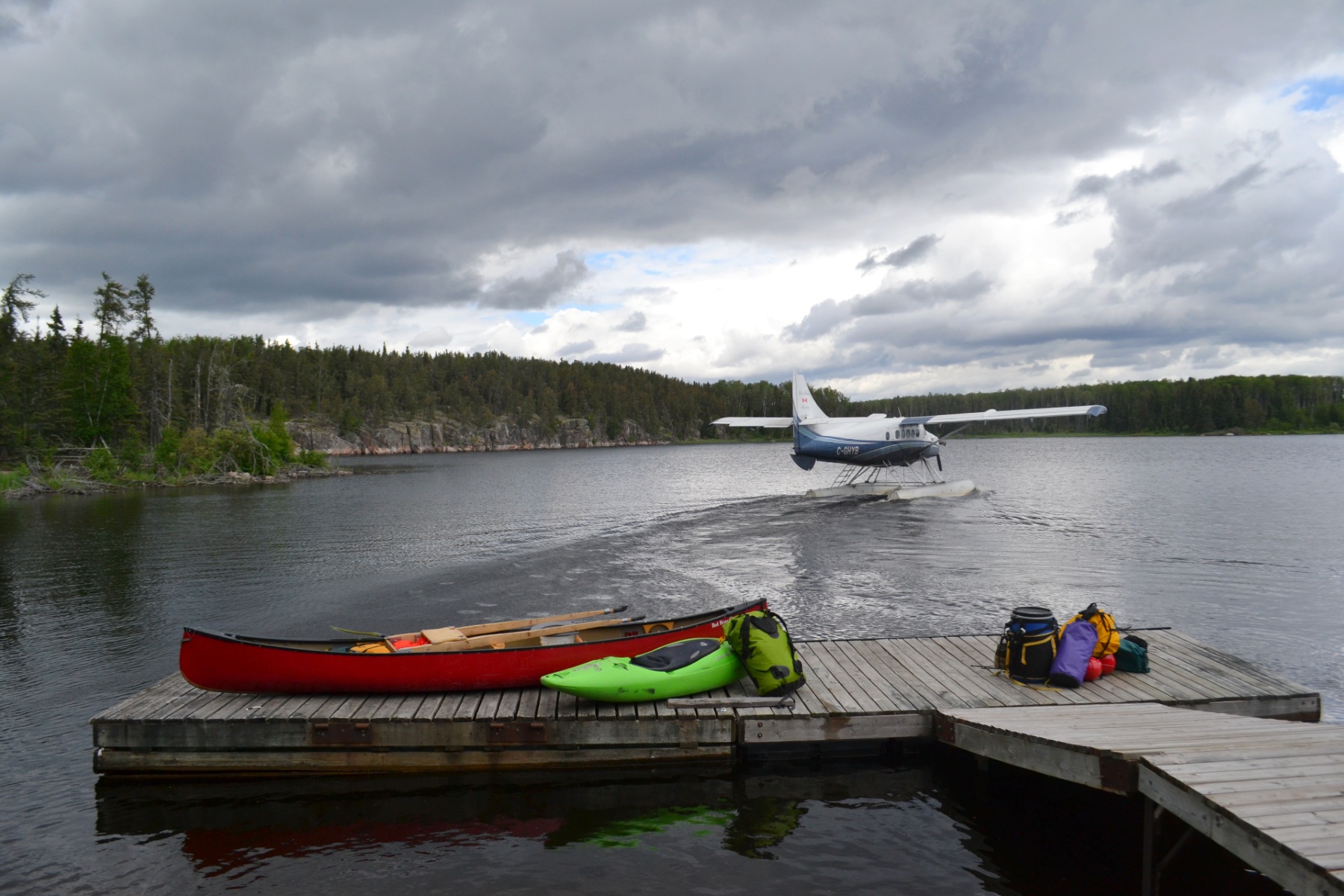 After we quickly unload the plane and bid a nervous farewell to the pilot, we set out on the Bloodvein River. For Jill and Rick, this will be their second time down this river; we are retracing their steps from a trip over 30 years ago. Over the next 10 days, we navigate the river’s rugged winding course through stunning forest without seeing a single person.

We run some of the easy rapids with Rick in the canoe; it is clear he absolutely loves it! We walk more rapids than we probably would normally, but we don’t take any chances. Portages are no easy feat though, Colin and I do our first trip carrying the food barrel and two packs to scout the trail and come up with a game plan to get Rick over safely. 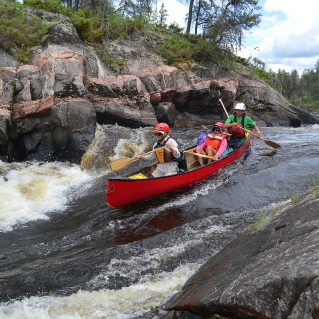 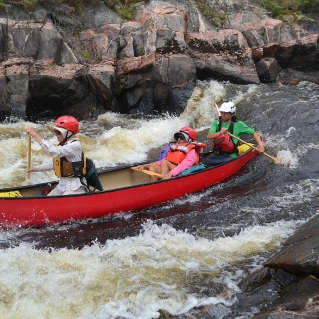 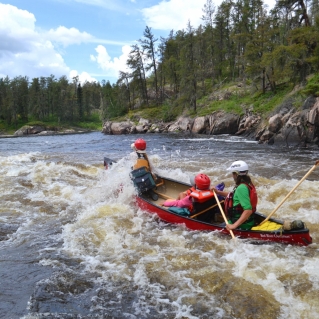 If the portage is short, Rick walks the trail with Colin and I supporting him on either side. If the portage is long, we get Rick onto a custom-built ‘all-terrain wheelchair.’ A unique looking contraption built by a team of kind friends back home. The frame is made of cedar with 20-inch mountain bike tires on quick-release mechanisms for easy transport. It works well at navigating rocky rugged terrain found along these portages. Although on more than a few occasions, we find ourselves carrying the wheelchair with Rick in it up and over fallen trees that litter the portage trails. Once we get Rick to the other side, we go back for the canoe.

I’d be lying if I said this trip wasn’t grueling for Colin and me. It is right up there with one of the hardest things we’ve ever done. The two of us have done many trips together on distant rivers all over Northern Canada, however, our trips have looked quite different. We’re often out exploring wild places with fellow young paddlers. We paddle for ourselves, determined to push our limits and those of the sport, going bigger, further and faster on remote rivers that have seldom been run. On this river, we are here for Rick. Our backs are stiff from the heavy lifting, our minds are tired from the constant planning, problem-solving and risk management, but there are countless precious moments making it all so worth it. 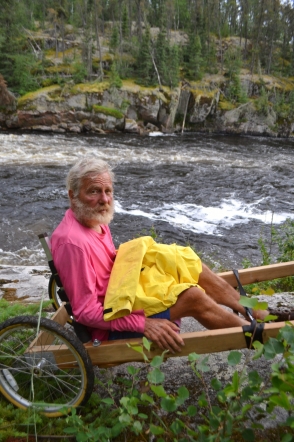 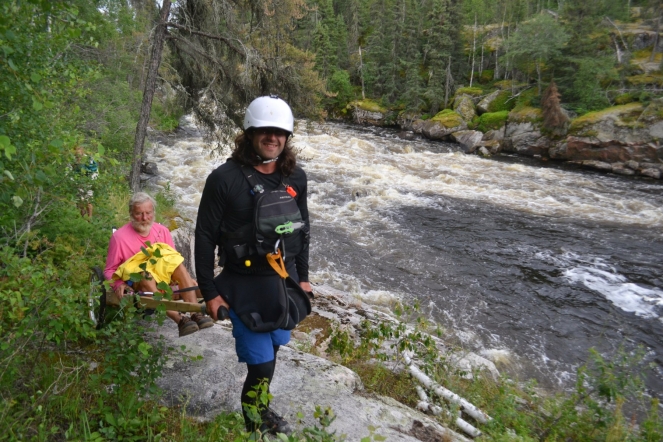 On an early morning, we paddle around a bend in the river to find a moose-feeding knee-deep in the river. Rick points to the animal and watches it attentively. For years Rick has taken biology students from the university on field trips to study moose and their mating behavior during the rut. Students watched as Rick called for moose, and stood in awe as they responded to his calls and approached.

He has spent his career traveling to wild places such as this, in pursuit of moments with majestic creatures such as the one standing in the river before us. We watch in silence as the moose slowly retreats from the river and vanishes into the willows. Rick doesn’t need to speak for us to know the joy he feels, a simple smile and the glow in his eyes is all it takes. 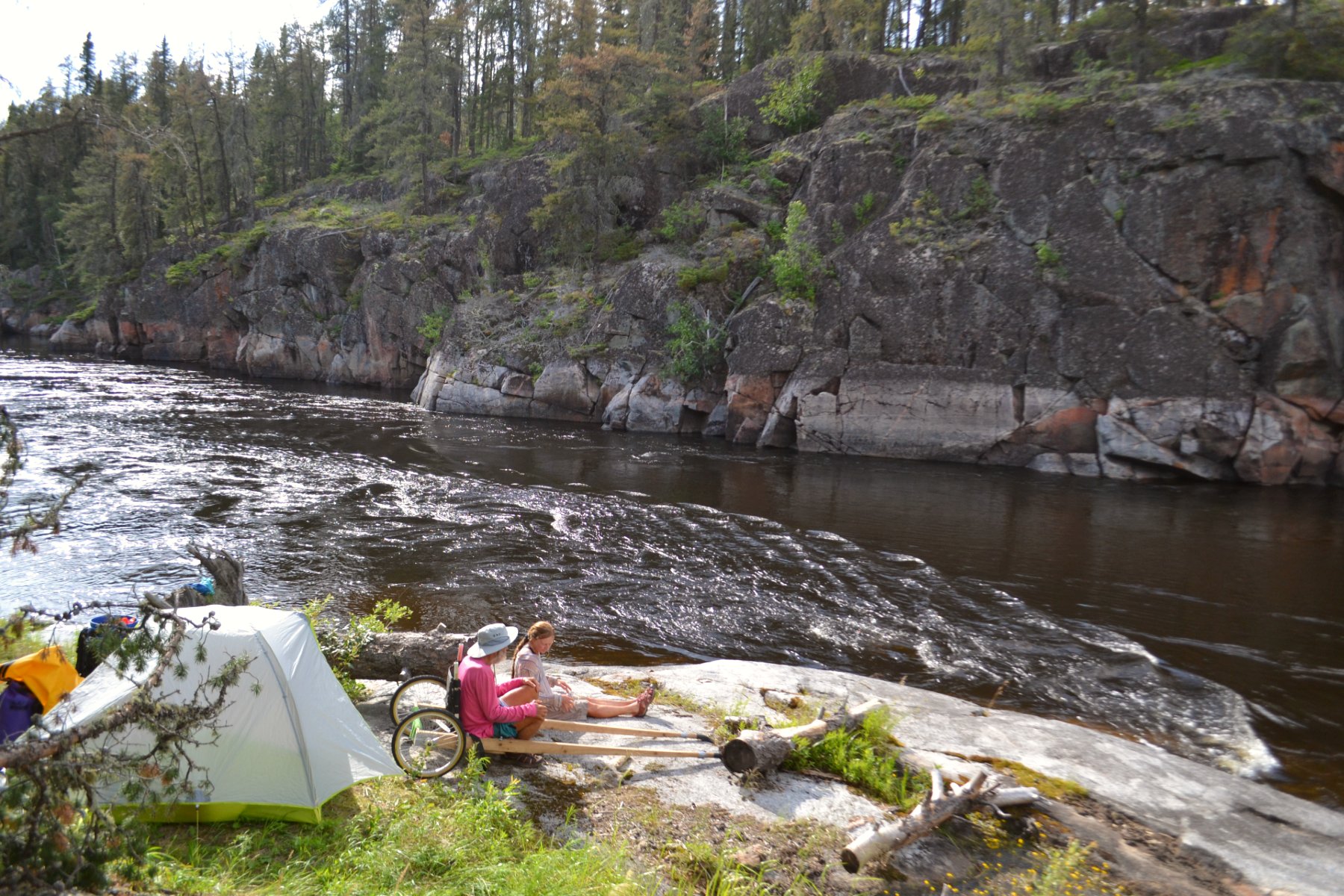 The rushing sound of water flowing over the Precambrian shield is the soundtrack to our evening routine around camp. Jill sets up their tent, while Colin filters water, I’m making dinner while Rick supervises. I let him sample the chicken stew as I continue to stir. The golden light of the setting sun beams through the forest and Jill turns to Rick. “Are you loving this?” she asks. His response is short but to the point, “I sure am.” Jill has often said Rick is happiest in the woods, and I have no doubt in my mind it is true. Rick is living proof that adventure is happiness, and happiness is health. 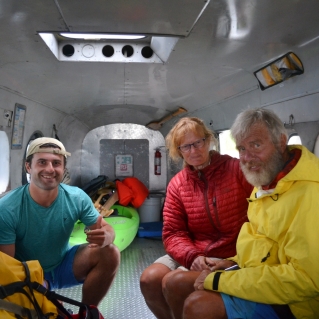 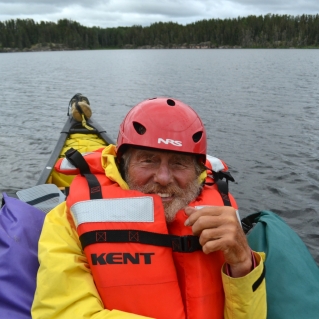 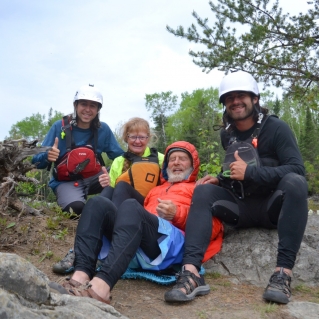 Who can paddle? I am not suggesting we should rush to take senior citizens into remote fly-in wilderness rivers. That’s a high-risk endeavor that should not be taken lightly. But while our adventure was a bit out there, I see it now as a wonderful exchange of gifts and the experience is most certainly one of my all-time best adventures. It all leaves me wondering if we should pay more attention to who is left on shore, watching. A simple afternoon paddling flat water on a local lake or river with an unexpected aspiring paddler offers an opportunity for something very special, all around.