The Battle to Circumnavigate Stewart Island

We were isolated and alone off the remote western coast of Stewart Island, New Zealand’s third-largest island. The wind was building. It beat us down with 40-knots of bitterly cold Southerly right in the face.  And the swell grew big, really big. It was tough to make progress and exhaustion crept over the team. Conversation dissolved to just critical shouts pointing out obstacles.

The massive rollers moving in from the southwest smashed our gear-laden boats, before crashing into the West Coast bluffs and refracting back in a turmoil of water. Every big set threatened to flip my sea kayak and pushed me closer to the unforgiving cliffs. The icy inhospitable waters of the Southern Ocean raged. Between two storm systems, we bee-lined for the South Cape and safe harbor—a must-make move if we wanted to round the South Cape alive. We hunkered down in our determination to paddle 10 kilometers of exposed coastline. 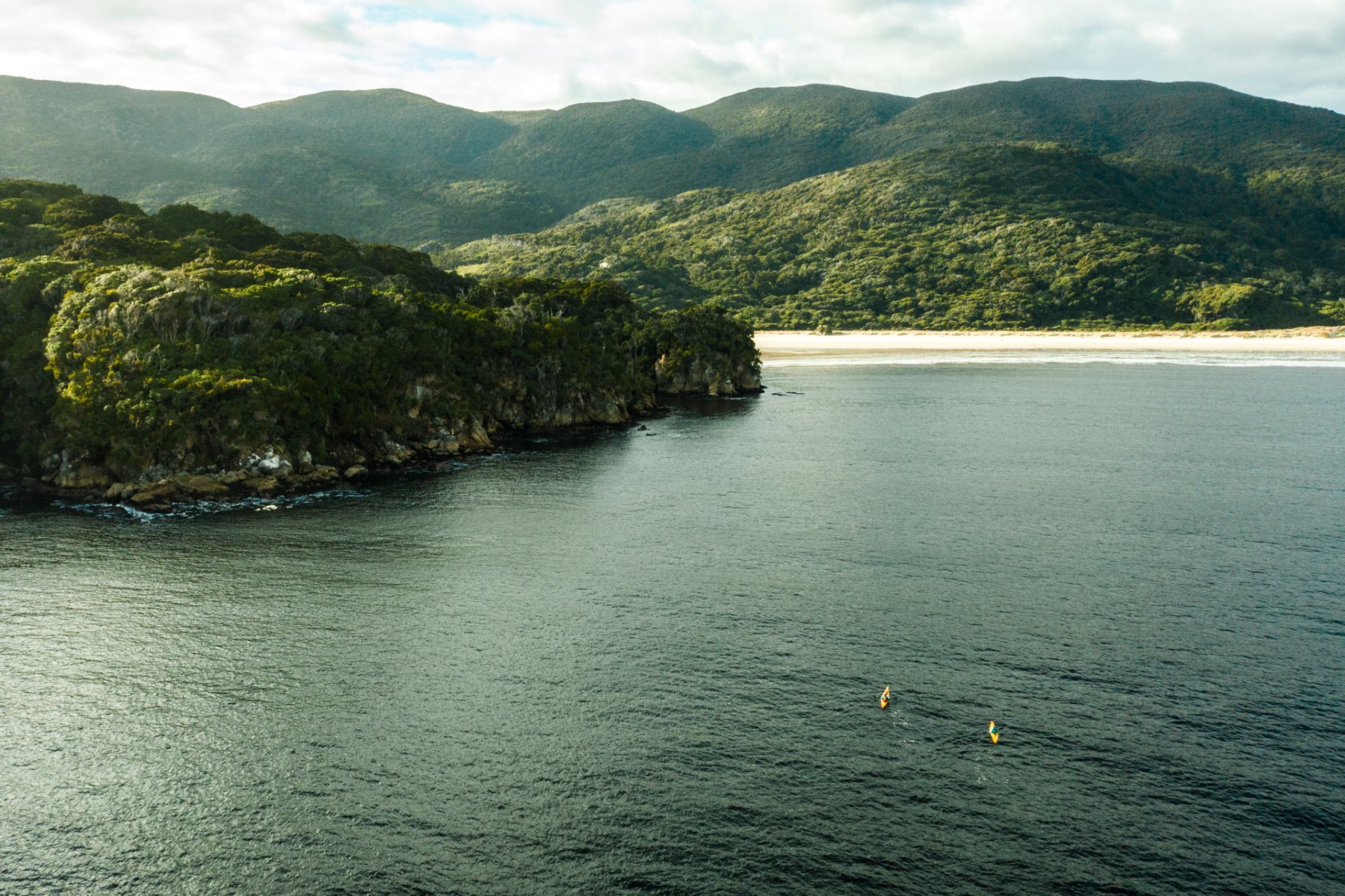 Eight days earlier, the ferry had docked in Oban, Stewart Island’s capital, and really, the only town on the island. It’s a quaint fishing town perched on the shore and slightly hidden at the back of Half Moon Bay. Home to adventurers, conservationists, fisher-people and anyone just wanting to take it down a notch, every face beckoned with a friendly smile.

For us, Stewart Island was where we would launch our adventure. After too many days of travel, we were fired up to get on the water. Smack in the center of town, we turned the Half-Moon Bay beach into a sprawling mess of equipment, Radix food and kayak kit as we prepped to attempt a circumnavigation of Stewart Island. Barely 12 hours later, as the sun began to peek over the horizon, we launched our kayaks and headed west. We departed with a goal to complete the circumnavigation in 12 days, but really, we didn’t know when we would be back. 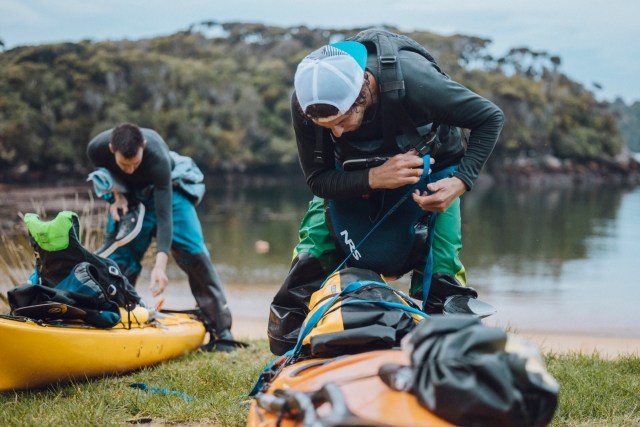 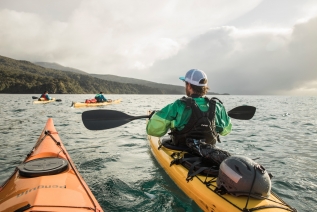 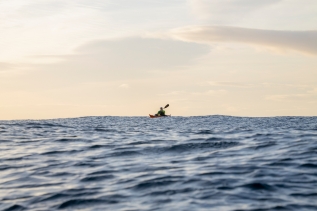 The idea to paddle around Stewart Island in the depths of winter had been born in the heat of the Covid-19 New Zealand Lockdown. This adventure had always been talked about but continuously sidelined for a variety of reasons. But lockdown gave the idea newfound energy and suddenly a passing comment evolved into logistics and dates.

Despite years of whitewater kayaking, I have to admit that sea kayaking is a totally new game for both my crew and me. The planning involved unchartered conversations and research—swell charts and wind forecasts, currents and tidal charts, and safe harbors to rest and shelter. Marine radios, forecasting, GPS Comms… the gear list went on and on. But within two months, we had dialed in the logistics and gear and we pushed off into the Southern Ocean.

We headed west along the edge of Foveaux Strait. In the distance, Bluff Hill silhouetted the southern tip of the South Island against the dawn sun. Our progress was fast, and within minutes, we left behind all signs of civilization and the constant advice of the upcoming weather. 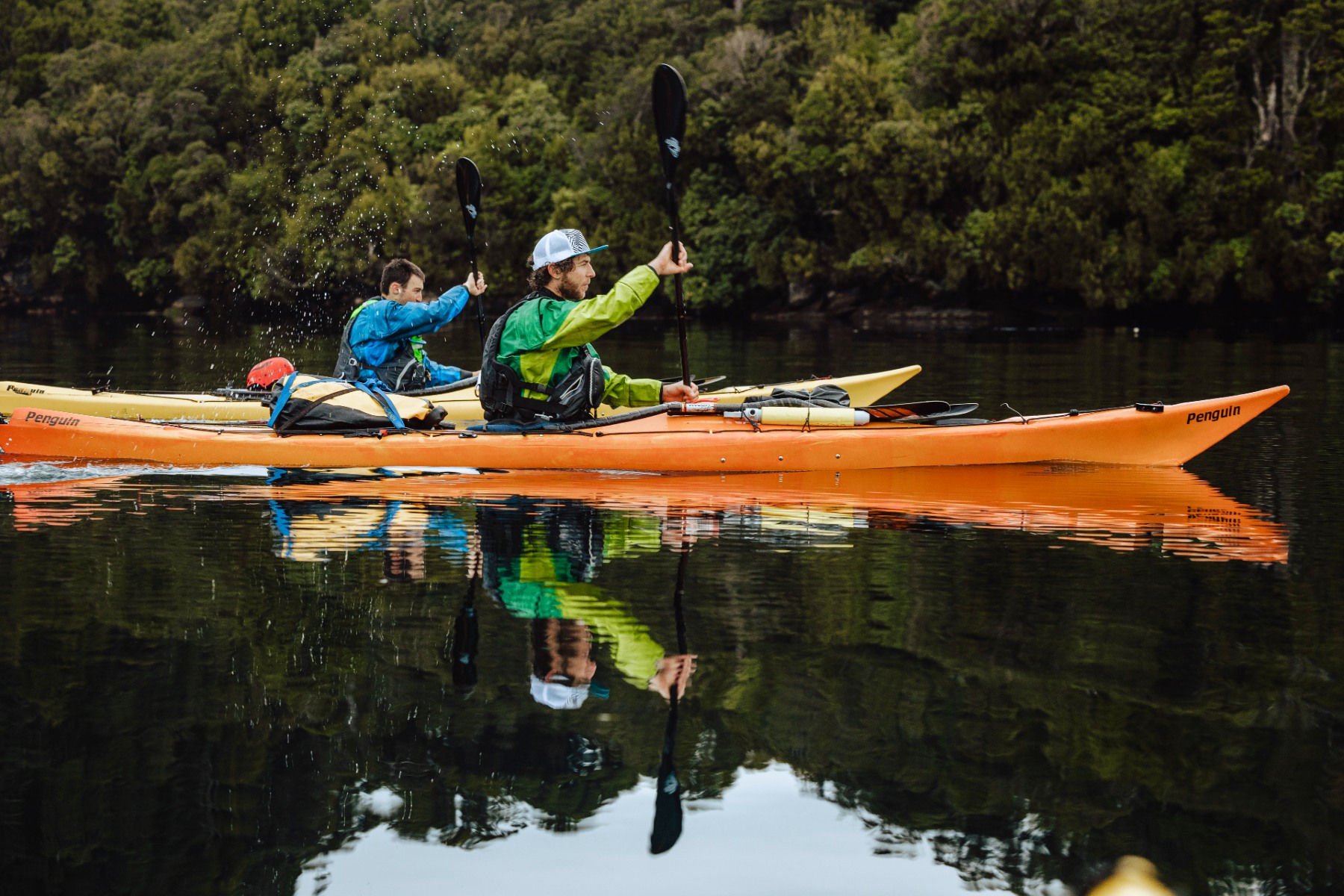 Māoris call Foveaux Strait Te Ara a Kiwa or “The Path of the Whale.” It separates the southern coast of the South Island with Stewart Island and is infamous for its deadly currents, vicious winds and scattered rocky islands hidden in a low, dense fog. Rounding out of the bay, the current quickly drug us out toward the North Cape. We hugged the coastline and worked our way west, setting the scene for our expedition. It was quiet out there. A place where only a few people venture on the land, let alone on the water.

As the days progressed, it became obvious our biggest challenge was time. The roaring Westerly had picked up, slowing our progress to a near standstill. We hoped for great weather but planned for the worst. It was mid-winter after all. We made little progress along the Northern Coast during the first four days as we constantly battled the gusting Westerlies. Eventually, we sought shelter at the Christmas Village Hut to wait out the storm, recalculate our timeframe and count our food—again. This gave us a moment to wander inland and explore some of the magical forests that blanket the island. 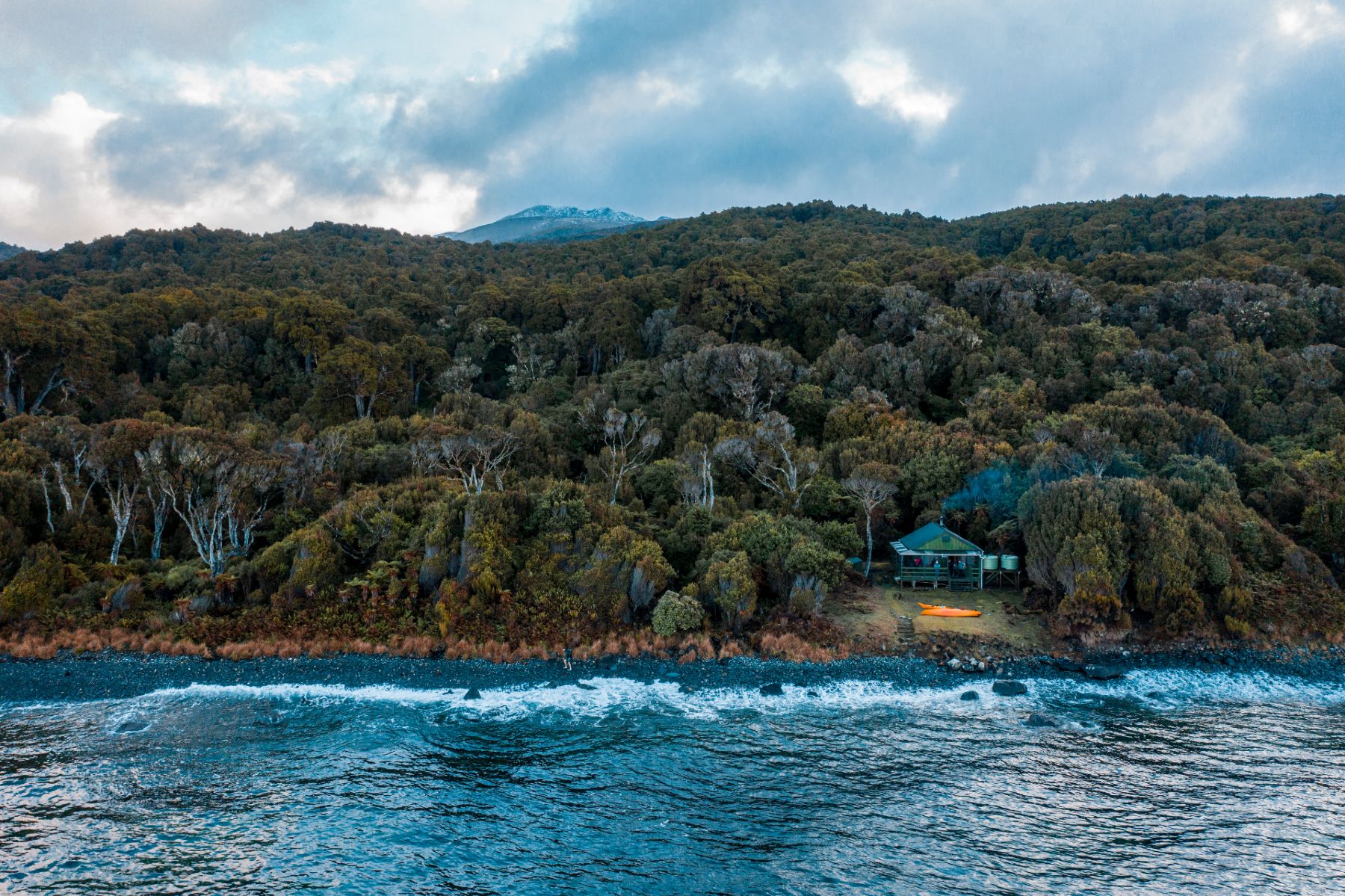 Finally, the waves and wind subsided, and we pushed to round the North West Cape. With pre-made Radix meals tucked into our lifejackets, we prepared for a massive day hoping to reach DOC hut in Doughboy Bay, a safe harbor for the night. This day highlighted the relentlessness of this coastline. Exploring the bays of Long Harry and seeing the towering pillars of the East Ruggedy Mountains blew our little minds.

The currents of the Inner Passage gave us a needed break and pushed us more than 10 kilometers offshore. We by-passed the massive Mason Bay, an eight-kilometer-long white sand beach that attracts some of the most epic—and isolated—surf in the country. The island remained just visible in the distance as a slight tail swell combined with a northerly wind gently pushed us south. The day’s goal had been ambitious, but we knew that if we didn’t cover ground the expedition was over. Our food rations would last for 10 days and we had already used five without even getting a fourth of the way around Stewart Island.

Doughboy Bay is one of the best-kept secrets on earth. Frustrations from the eight-kilometer struggle against the brisk outgoing tide vanished when we rounded the point and entered the bay. Sheltered from the wind, a small hut stood as a stunning oasis on the edge of the white beach, nestled amongst the thick Southern bush that blankets the edge of the bay. A tanned water stream beading down the beach reflected the golden light of the setting sun. It was a picture-perfect welcome. 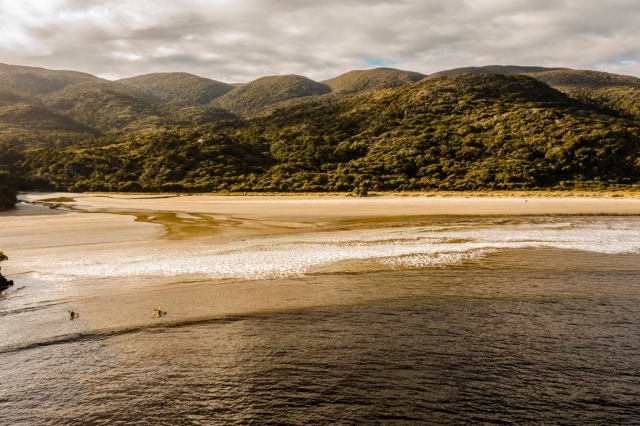 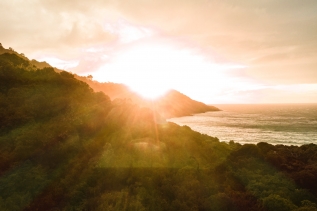 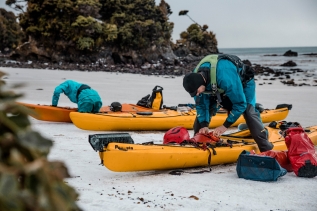 The following morning, we pushed off in the dark, leaving the safety of Doughboy Bay, we entered the most exposed section of the circumnavigation: 10 kilometers of coastline before Easy Harbour. Paddling down the West Coast was incredible, seeing the island from the sea and how rugged and wild it is. The Roaring Forties constantly bash this coastline. On top of that, it’s the first landmass that giant waves reach, building up for nearly 6,000 kilometers from Antarctica. There’s a reason it’s an isolated, inhospitable place.

Rocky bluffs eliminated all options to head back to shore until a large channel gifted access to the shelter of Kundy Island. But to reach the island, we had to battle the Southern Ocean swells. The wind picked up and the swell began to build. Soon, huge breaking waves barrelled over our kayaks then bounced off the bluffs, refracting back to slam our boats from the other direction. It was an intense few hours, and we all had to draw from our whitewater experience. We needed to get to shelter and fast. The wind and waves made it hard to communicate and make a plan, but it was obvious we all wanted to get back on solid ground.

Finding the channel into Kundy Island was a challenge. With every rise of the swell, we studied the horizon as far as we could see trying to figure out whether the waves were breaking across the channel. Waves breaking in the wrong direction would push us into some unforgiving cliffs. We crept toward the shore. As the water shallowed, the opposing current created some massive surf, which we used to our advantage. Each surf we tried to edge our boats in the direction of Kundy Island. Two kilometers or so later we pulled into calmer waters and finally relaxed. 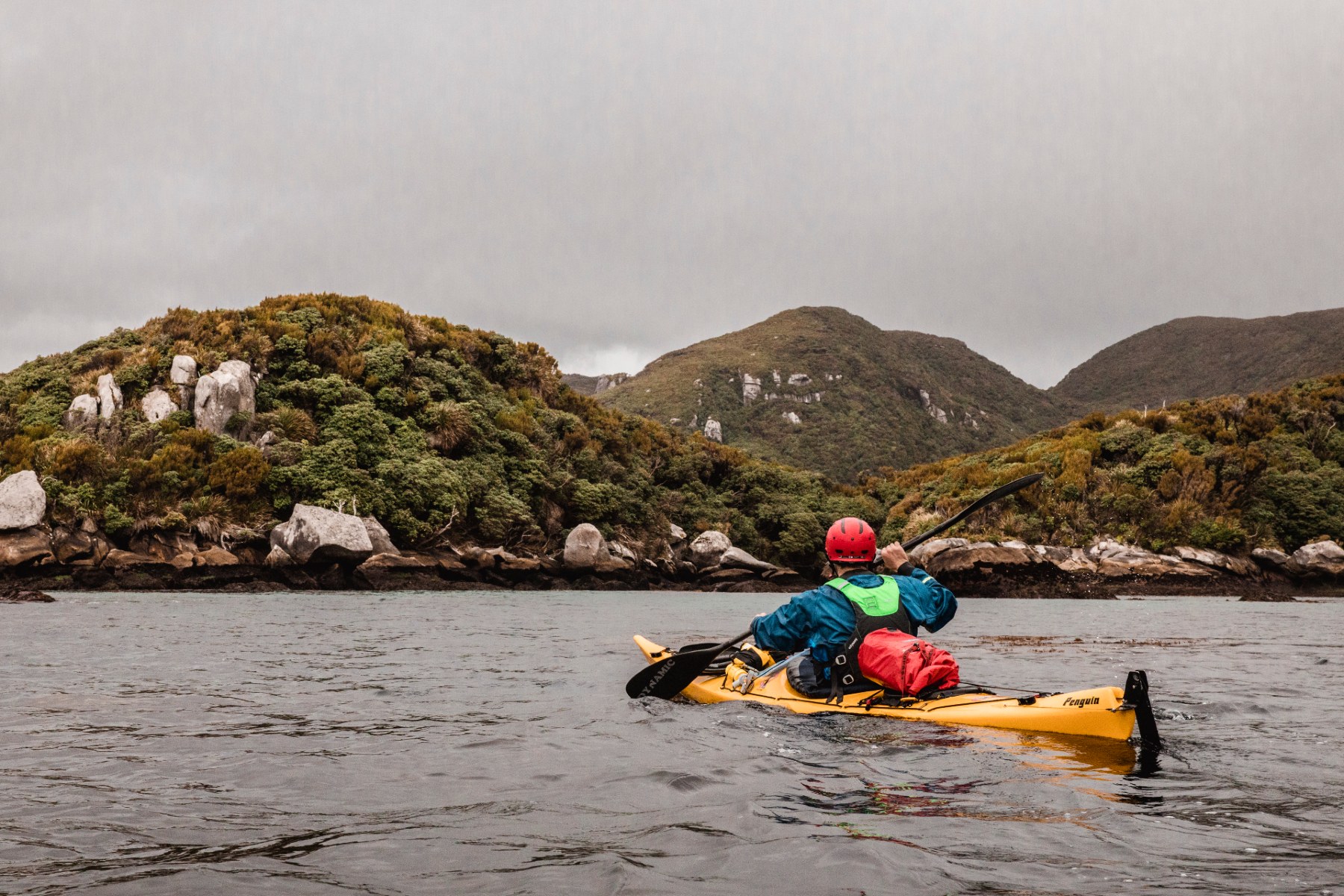 From here we hopscotched behind scattered Islands unable to enter the open ocean. Taking it slow in those tough conditions was vital to get us farther south to a better staging ground for rounding the South Cape. From here it was a waiting game for the swell to subside before making an attempt. In a wild place such as this, there was no way we wanted to head out in less-than-manageable conditions. A day later and the conditions looked good—variable winds with 2.6 SW swell. We went for it and several hours later, the shelter and beauty of Port Pegasus greeted us. In the shadow of the giant granite domes of Gog and Magog, we dropped a line, caught a fish and relaxed after what was a fairly massive day paddling past the most epic coastal landscape imaginable.

As we paddled along the Eastern Coast, we started to see more and more fishing boats working the coastline feeding the constant demand for Southern Crayfish. We crushed the distance needed to reach Oban. The strenuous demands of the Western Coast made this side feel like plain sailing. But in reality, it was still two huge physically taxing days. 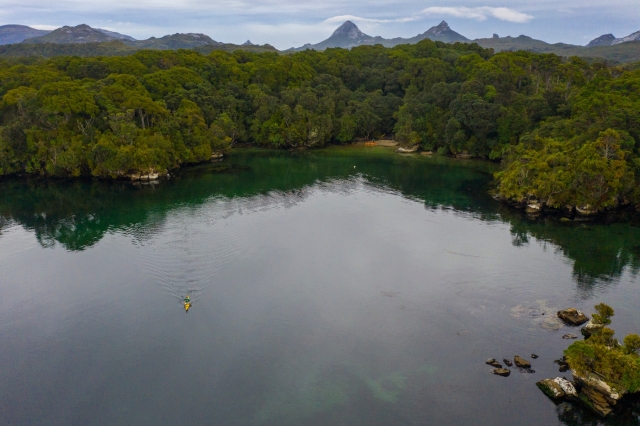 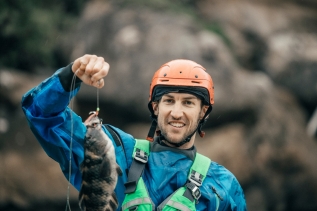 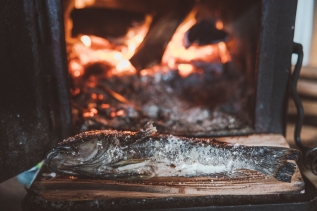 When we left Port Pegasus, a pod of dolphins surfaced and started swimming toward us, leading us out of the harbour and back into the ocean. They seemed to stay with us for a while, randomly reappearing before heading out to sea. We passed bay after bay as we headed north to Lords River, one of the most beautiful places on the journey. The river snakes its way inland and could only imagine the whitewater gems hidden in the hills.

On our last night, as we were drying out on the beach at Lords River Hunters Hut a cray boat pulled in. We shared a few comments with the crew before they tossed a bag of crayfish on the beach next to us. Dinner was served. We devoured the six prime-sized New Zealand Cray tails, fueling our bodies for our last big but achievable day. Tomorrow we would return to Oban. 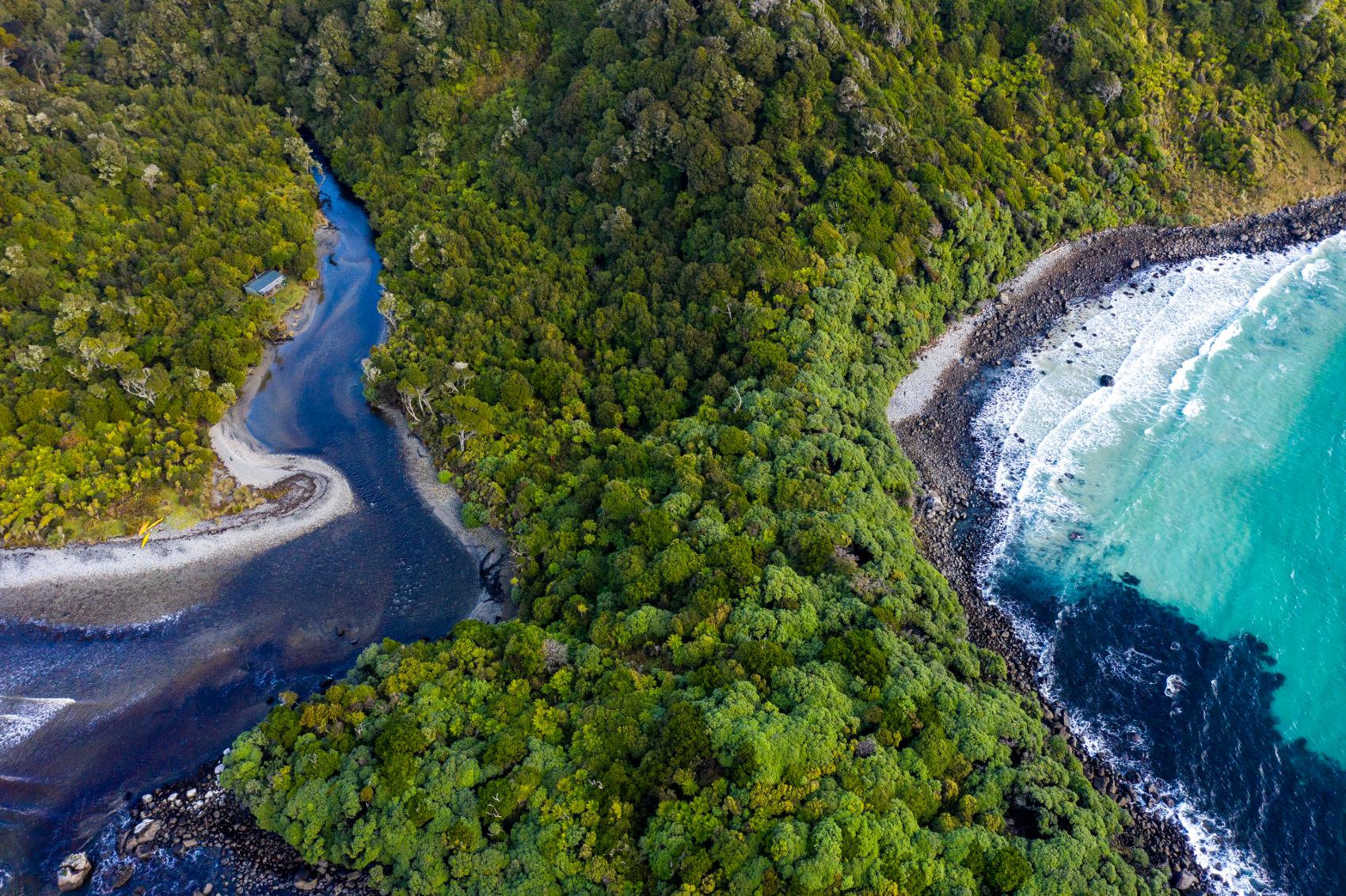 We knew it would be a long one—some 50 kilometers against a headwind and edging back into the currents of the Foveaux Strait. After eight hours, we rounded the Needles Point, and Oban became visible in the distance. We pushed it across the last exposed section of the trip before arriving at the edge of Half Moon Bay. The wind subsided and we enjoyed the last two kilometers as our fatigued and broken bodies steered our boats to rest on the beach we had set off from 12 days prior. We pulled our boats up to their final resting spot, ditched our soggy paddling clothes and headed to the pub for a beer!

A note from Mike Dawson on capturing an expedition on camera. 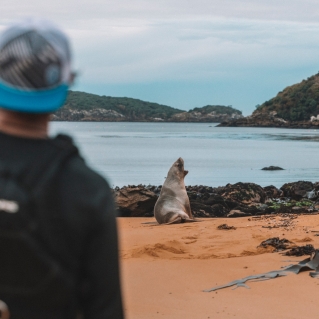 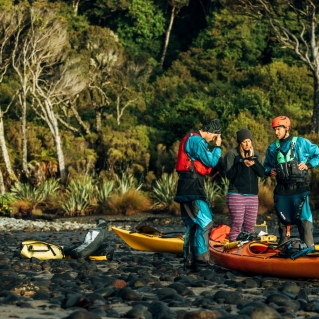 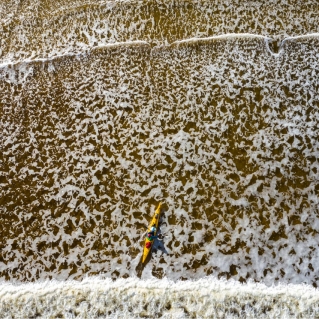 It’s a challenge balancing capturing the expedition to tell the story of being out there without taking away from the authentic experience of just enjoying it. Alone. Isolated. Exploring an untouched, beautiful landscape for the first time. For me, the question is always: What camera set-up should I add to the monstrosity of equipment packed into my boat? Ultimately, in the wild world of adventure photography, less is usually more. The simpler more diverse kit the better. Countless expeditions to corners of the globe have taught me the importance of the minimalistic approach to documenting a trip like this. You want a set-up that gets the shot but doesn’t slow the team down. It needs to be accessible, less you miss capturing the moment.

Shooting from a kayak is a dangerous game. I kept my camera balanced precariously between my legs. And there’s nothing quite as daunting as taking off the spray deck of your kayak when you’re far out in the ocean and sacrificing the only thing stopping the icy cold seawater from rushing in and sinking my bright little kayak—just to get the shot. And there were plenty of shots missed. Magical moments on the water where I couldn’t dare get my camera out, let alone take a hand off the paddle. Scary moments where the sole focus was survival. But that’s all part of the game of sharing the story.