Kayaking is the easy part; getting to the river, however, can be a whole ‘nother story. This is particularly true when the river has never been paddled before and flows through an inaccessible jungle. In order to find out what lay within the canyons of one of the last un-run rivers in Costa Rica—the Río Telire— we first had to figure out how the hell we were going to get there. 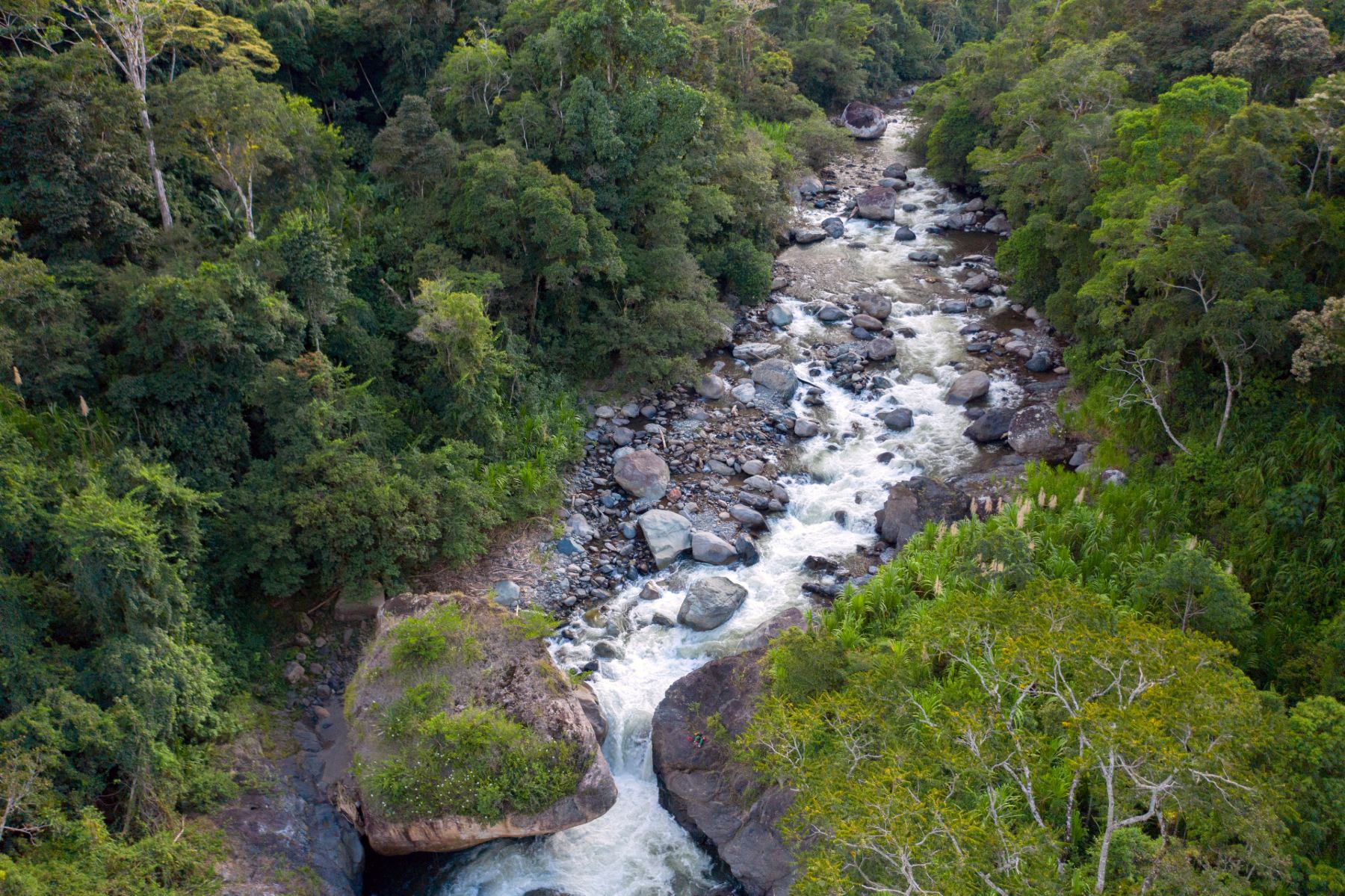 The Telire drains the entire eastern flank of 12,500-foot Cerro Chirripó, the highest peak in Costa Rica. As it flows east toward the Caribbean, the Telire cuts through the Talamanca Mountains before emerging into the Caribbean lowlands, where it confluences with the Yorkin and becomes the Río Sixaola, the river that separates Costa Rica from Panama.

The Bribri and Cabécar are closely related but speak their own respective languages. Various matrilineal clans makeup both tribes, meaning the mother, or the matriarch, is the head of the household, and the bloodline follows accordingly. In a time when many indigenous peoples are being assimilated into society and their languages lost, both ethnic groups have proudly fought to maintain their culture and identity and continue to communicate in languages uniquely their own. 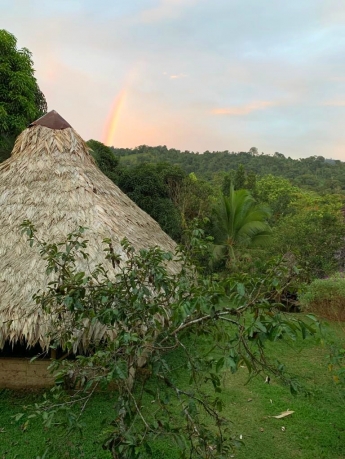 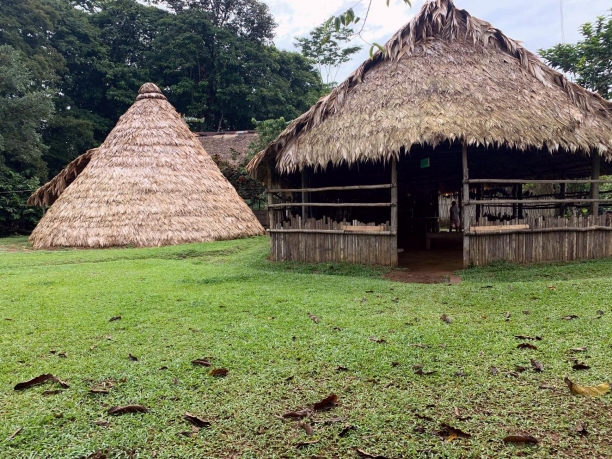 While teaching a group of students during the fall semester leading up to the trip, I had the privilege of living with a group of BriBri on a tributary adjacent to the Telire. This experience gave me the unique opportunity to learn about their culture and acquaint myself with the area. Living in this village is where I first heard talk of whitewater in the upper reaches of the Telire; needless to say, it piqued my interest.

Alto Telire, or Piedra Mesa, as the Cabécar call it, is the most remote settlement of indigenous people in the country. Surrounded by mountains and lore, it was difficult to discern concrete information about this little-known region. We learned of a history of narco-trafficking, foreign cartels and, more recently, of on-going infrastructure projects by the government, building clinics, schools, and houses.

In the months leading up to the trip, the biggest logistical hurdle was how to reach the put-in. There is little infrastructure in the Talamancas and even less information about the rivers. Different ideas of how to access the upper reaches of the Telire lead to dead ends and discouragement. “No, it’s not possible,” said some. “Bad idea, it’s too dangerous,” said others. But if you know Todd or Brendan Wells, you know what we did next. Despite the unknowns and despite what the naysayers said, we had to go see for ourselves. 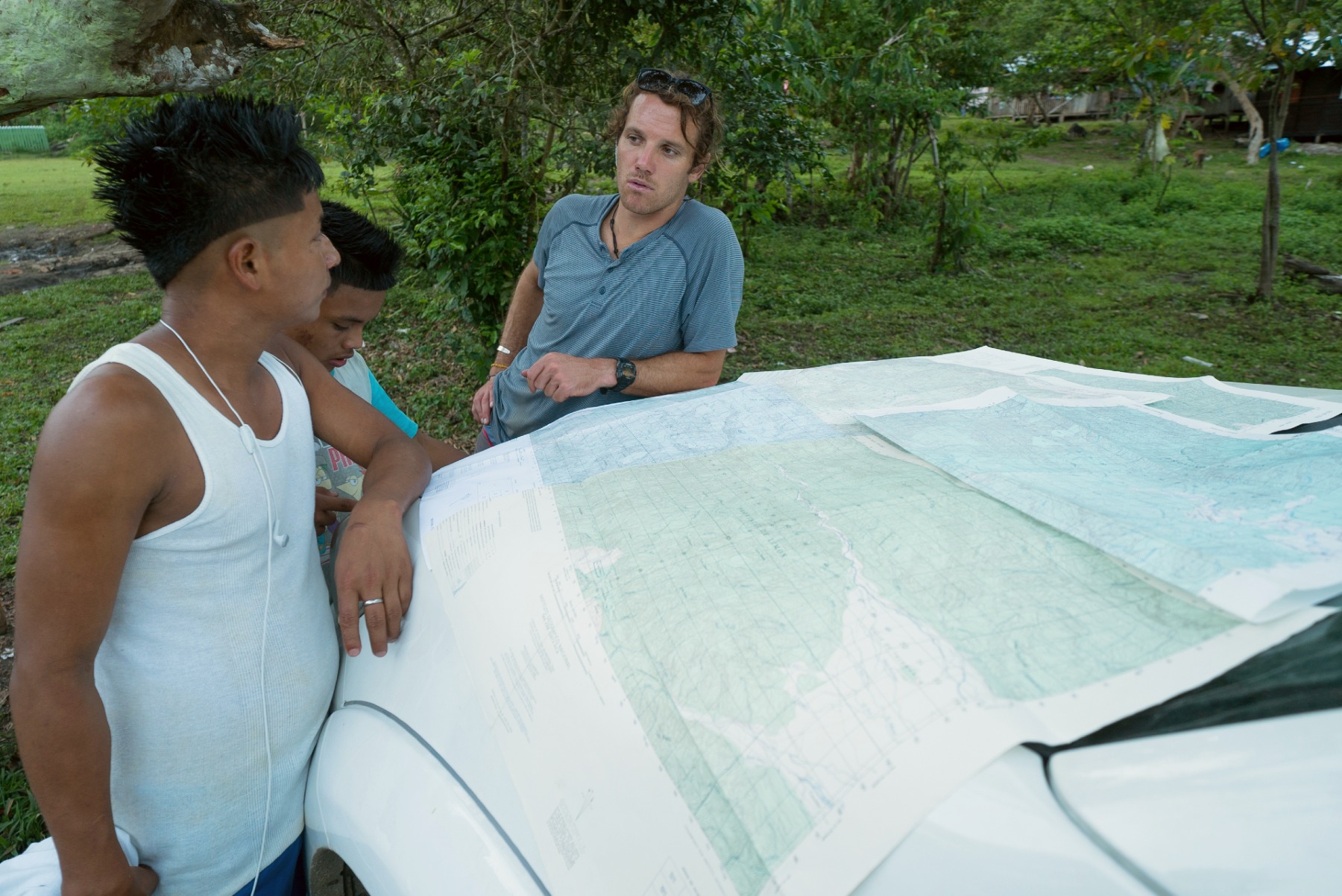 We knew one thing for sure, there were two ways into the Telire—by foot or by air. By foot, the options looked grim: a four-day hike up the drainage through steep, mountainous jungle or an ambitious crossing of the continental divide following the headwaters. By air, it would be a quick thirty-minute helicopter flight.

All of the locals we spoke to said the hike was off-trail and too arduous for carrying kayaks. We knew that the government had a contract with a heli company and was flying supplies into these upper communities; however, every helicopter company in the country told us it was simply not possible to take kayaks in or on the chopper.

With hope dwindling, we sat down to make a decision. We batted around ideas that slowly began to sound crazier and crazier. The Telire started to feel distant, and with only five days left on our visas, we began to look for other options. That was until ‘Big Dog,’ Todd and Brendan’s infamous father—who had been listening to our half-baked plan—simply said, “We’re going!” and began to prepare his things.

Even if we made it no farther, we knew we had to at least drive until the road ended to see what would happen next. 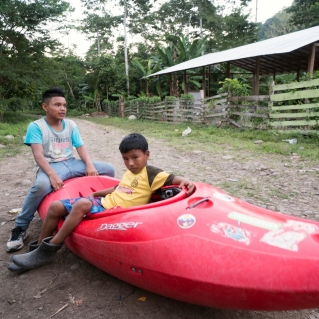 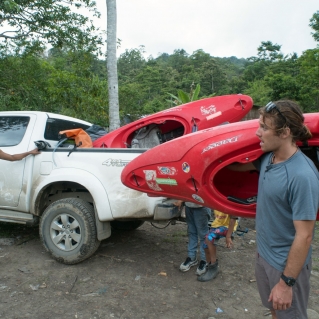 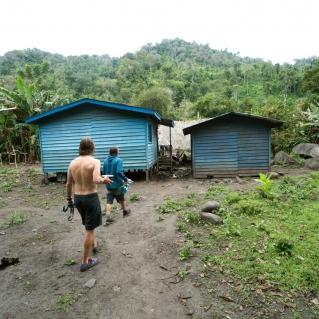 So, we journeyed across the country, through seas of banana plantations, until we arrived late in the day to the community from which our hike would begin. In Cuen, villagers spoke more Cabécar than Spanish. Despite much reservation, a handful of locals agreed to guide us in, but only to the next village, one full day’s walk away. From there, we were on our own. We tentatively agreed and began to backtrack down the long bumpy road to the closest town with a grocery store where we could organize food and gear.

The next morning, before committing to the hike, a gut feeling convinced us to make one last minute stop. We had heard from some guys on the street that a helicopter made a routine pit-stop in a nearby soccer field to load supplies before heading into Alto Telire. It seemed dubious but we had to follow up. A little more poking around and another neighbor assured us that the heli would land soon.

Sure enough, a glistening blue helicopter soon appeared on the horizon and moments later the air around us erupted as the ship landed on the midline of the soccer field with building materials sticking out of both sides of the cabin. The pilot had heard of the three gringos trying to hitch a ride to Alto Telire, but this was the first time we had the chance to talk to him face to face. Thirty minutes after he arrived, we were loading kayaks onto the skids.

“No puede ser!” It was happening. 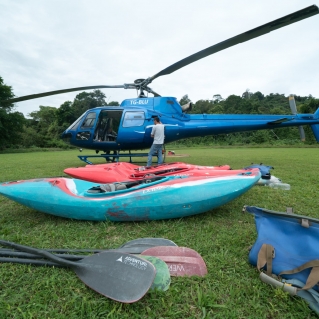 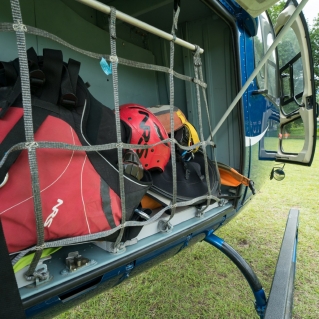 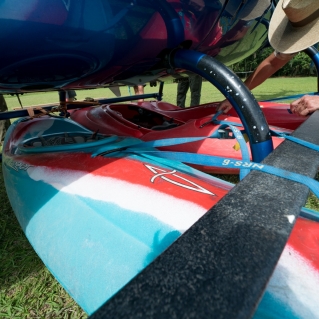 The flight was everything we could have imagined: spectacular views of the Cordillera de Talamanca and a few chance glimpses into the canyon we would soon descend.

Before we knew it, we banked sharply toward a small field and the valley filled with the sounds of the rotors reverberating off the canyon walls. As I waited for some direction, or a safety talk, the pilot ushered me out and pushed the paddles into my hands. I lowered my head and ran below the whirling blades. Before I had a chance to ask myself if I had all of my gear, the pilot was off again. I turned my eyes away just in time to see the rotor wash lift two kayaks off the ground and fly toward Todd. He ducked and we began to pack our things.

Slowly, several curious Cabécars materialized from the surrounding jungle. They watched as we divvied up food and then, neither group speaking the other’s mother tongue, we introduced ourselves in Spanish and shared what extra food we had. 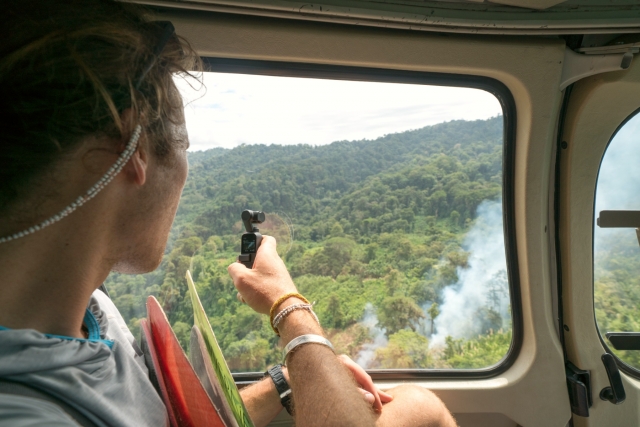 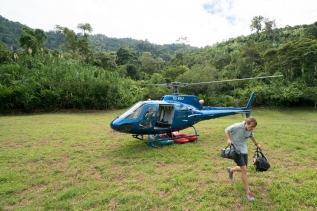 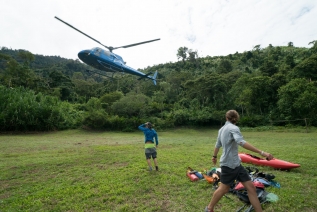 After a quick bushwack through the jungle, we emerged onto a bedrock terrace with a beautiful double drop into a mini-gorge in front of us. Oh yeah, this was the place. We hopped into our kayaks and headed downstream. Steady gradient and fun boulder gardens kept us busy until, after lunch, we arrived at the confluence with the Río Psei and the biggest horizon line yet.

From above, a colossal, house-sized boulder dominated the view, and it appeared that the entire river disappeared beneath it. We scrambled downstream along the left bank to get a better look. Fearing the worst, we were elated to find a perfect waterfall squeezed between the bedrock and the boulder. 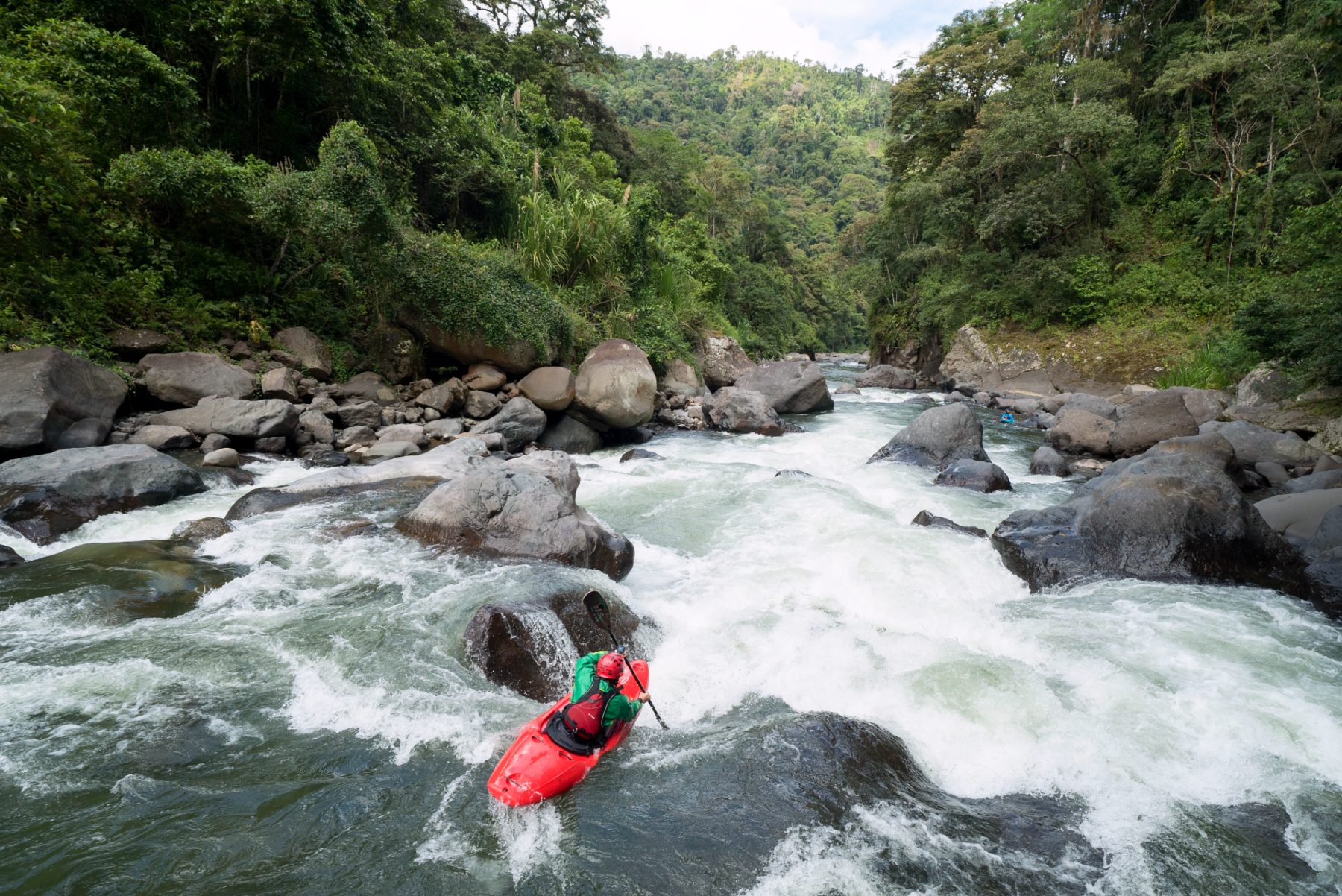 Thus, began the best sequence of whitewater on the Telire. After a fun lead-in to the waterfall, the river flushed through a beautifully scoured basalt gorge that ended as we paddled beneath two chockstones mysteriously suspended between the walls above us. Buzzing with the special stoke of exploring a river for the first time, we made camp for the night on a small beach beneath a Cabecar homestead and their fecund orange grove. The days begin and end early in this small equatorial country, and we were asleep in our hammocks by nine. 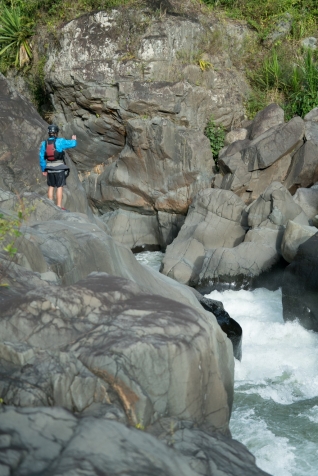 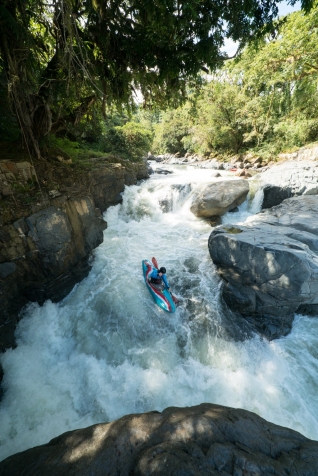 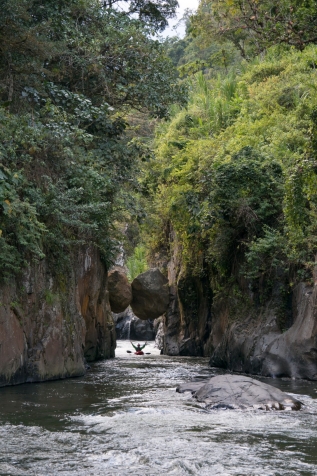 Craaaaaack! We awoke suddenly to the sound of a tree falling under the weight of three well-fed gringos hanging from it. We picked ourselves off the jungle floor and groggily rearranged our hammocks. In the morning, we woke up to a group of Cabécar children, mouths agape, puzzled by the scene before them: a ramshackle, double-decker, hammock and tarp set-up surrounded by a fallen tree and an explosion of kayaking gear. We exchanged food and stories with the kids, assessed how lucky we were not to be squished overnight, and headed downstream. 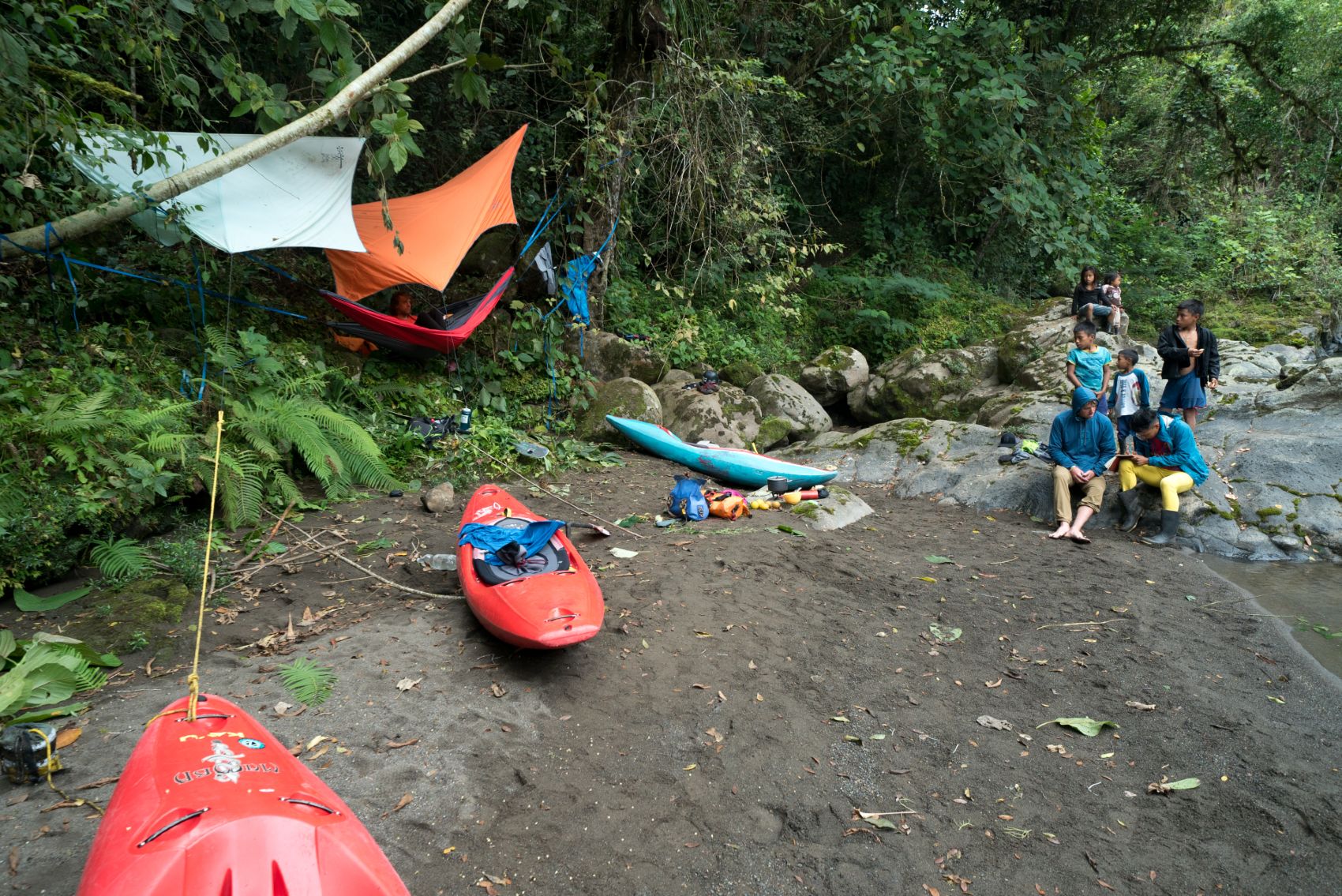 Deep, sheer-walled gorges and barren canyon walls extending far above characterized day two. We realized we were passing through a very special place, different from the rest of the canyons in Costa Rica and quite unique in its own right. Waterfalls cascaded down from both sides as we continued to make our way downstream.

We rounded a corner and saw the same helicopter that had transported us descend into another indigenous community, delivering building supplies for a new school. We couldn’t help but wonder how long this pristine river and the people that live along its banks would remain this way, isolated from the rest of civilization and the developed world. 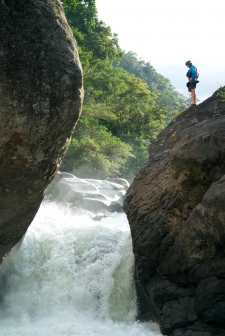 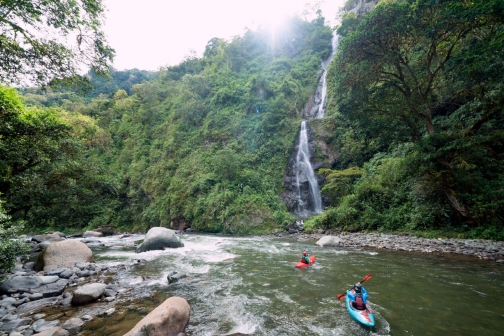 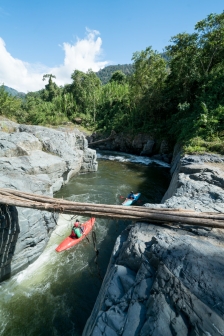 The gradient slowly flattened as the Telire spilled out of the Talamancas and into the vast banana plantations of the Caribbean lowlands. Dug-out, balsa wood canoes with 25 horsepower motors became common-place as we watched the canoes shuttle people, bananas, and even motorbikes up, down and across the river. We grabbed onto the rail of a passing canoe and the BriBri boatmen graciously ferried us the final kilometers to our takeout.

We took out in Suretka, a predominantly BriBri town where locals off-load bananas from canoes and truck them to port in Limon. As I wandered around barefoot, searching for a taxi, a woman read the look on my face and asked, “anda perdido?” (“Are you lost?”). Caught in an existential moment, it took me a moment to reply.

“No se,” I responded, grasping for words as I stood there on the banks of a free-flowing river paradise, my mind stuck somewhere between a place lost in time and a society without enough of it. 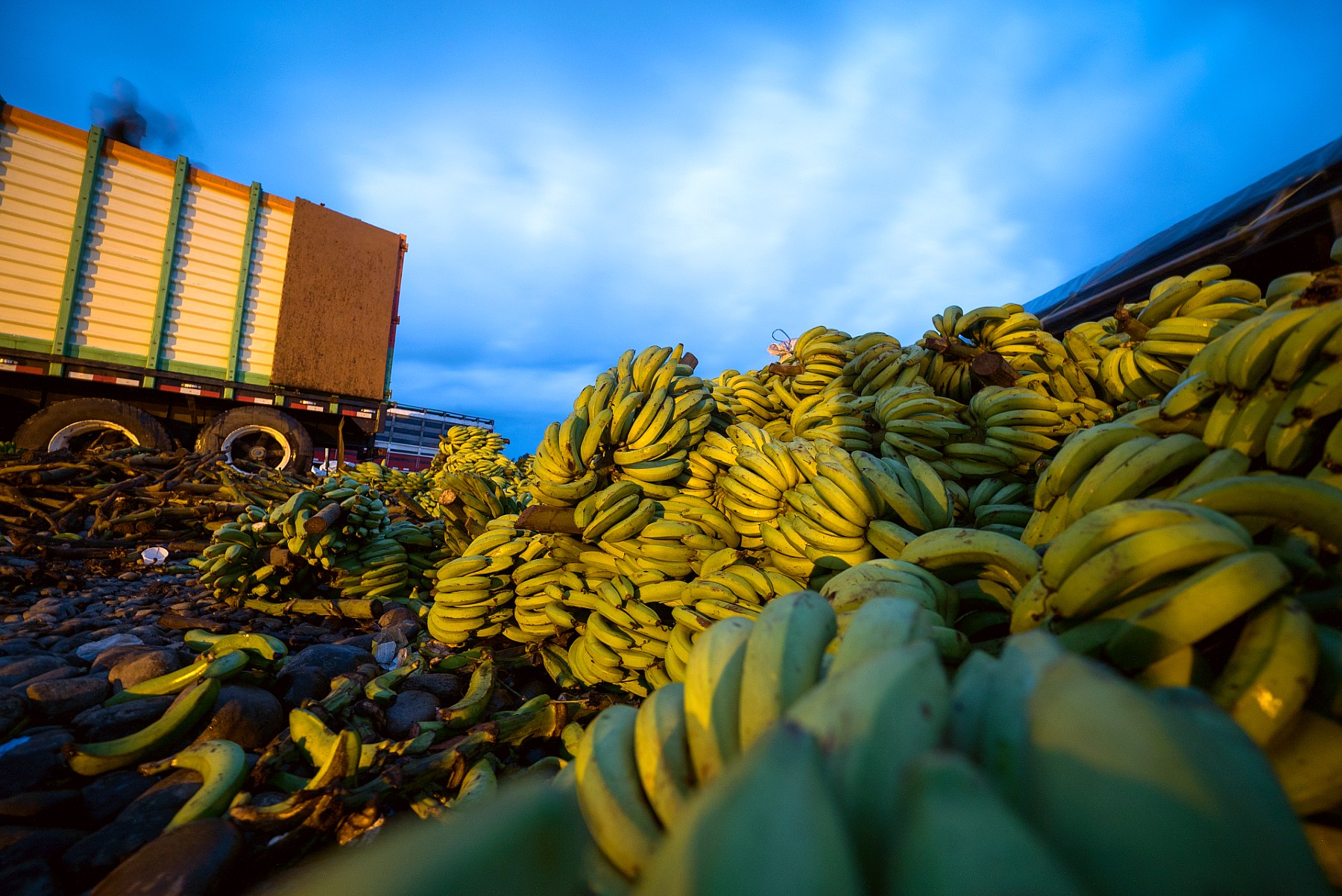 Editor’s Note: Guest contributor Brian Burger grew up whitewater kayaking in Colorado and honed his skills under many mentors and friends in the Pacific Northwest. A true water lover, Brian is grateful for free-flowing rivers and all the wild places kayaking has brought him and the people with whom he has experienced them. Read about Brian’s kayaking expedition through Siberia here.