The Last Wilderness of Scotland

The original intent of this journey was to paddle a remote region and document our adventure. But after watching the fleeting year from my window as a pandemic had the whole country under lockdown, our deep and aching desires to live and breathe the great outdoors no drove this journey.

My friend Ian Finch and I spent much of the 2020 lockdown studying maps of lochs in the Scottish Highlands, looking for ways to link them together to form a multi-day canoeing expedition. We discovered a particular circuit that linked up three lochs—Maree, Fionn, and Fada—with portages in between. It would be a 48-kilometer route through a region that locals and visitors alike often refer to as Scotland’s Last Wilderness. 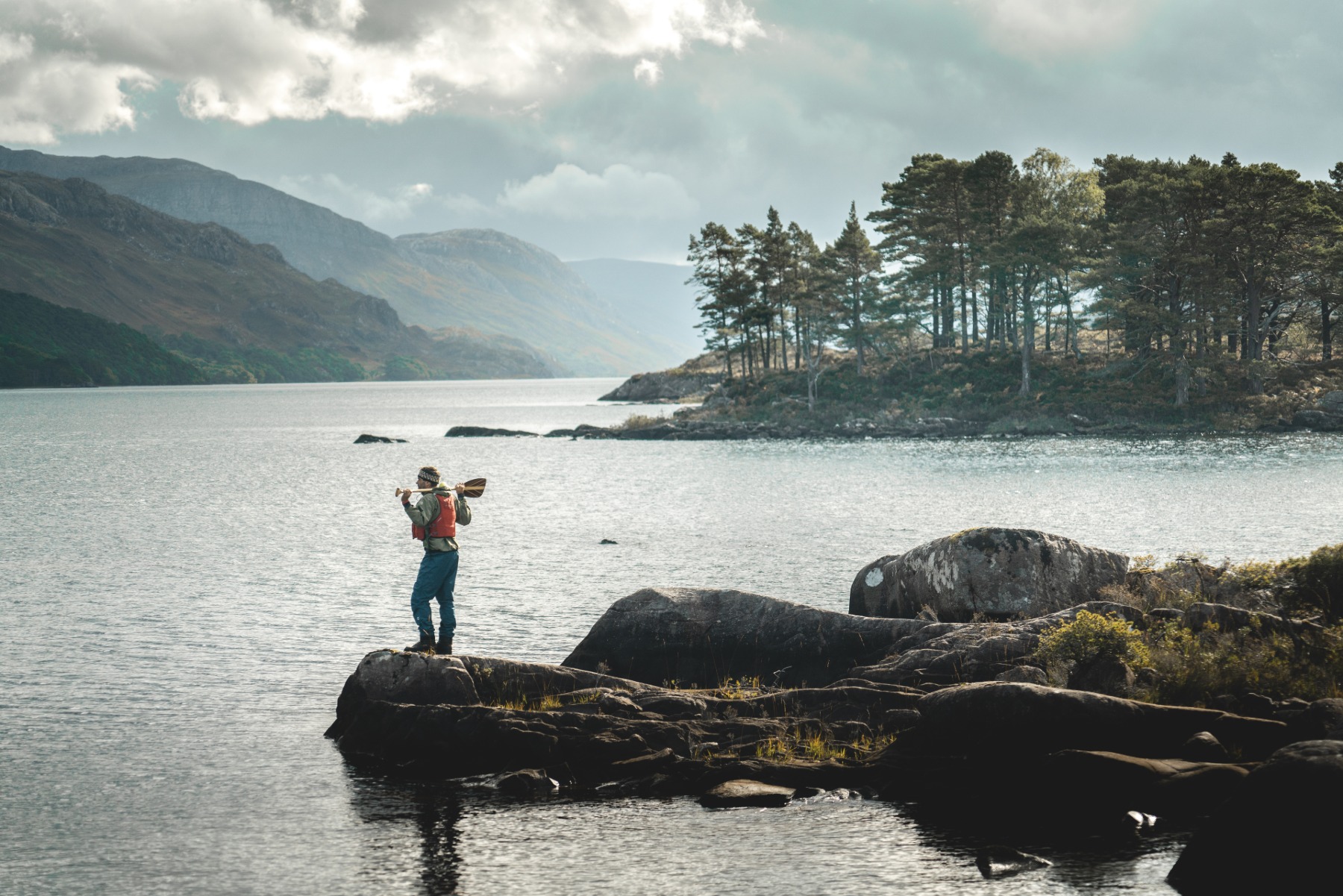 In late September, with lockdown restrictions lifted, we made the 650-mile journey from London to the banks of Loch Maree. We woke up that first morning on an outcrop overlooking the water below a dark overcast sky.

We had parked the car in a lay-by up the hill and had carried all the kit down in the dark. This was Ian’s first time back in a canoe since a 900-mile paddle we had done together in the U.S. the year before. I had only been out a handful of times since then on local rivers, but it didn’t take us long to adjust to being back on the water. The weather forecast predicted calm conditions for the entirety of our journey, but the dark clouds that loomed over the mighty Munro Slioch filled us with uncertainty. 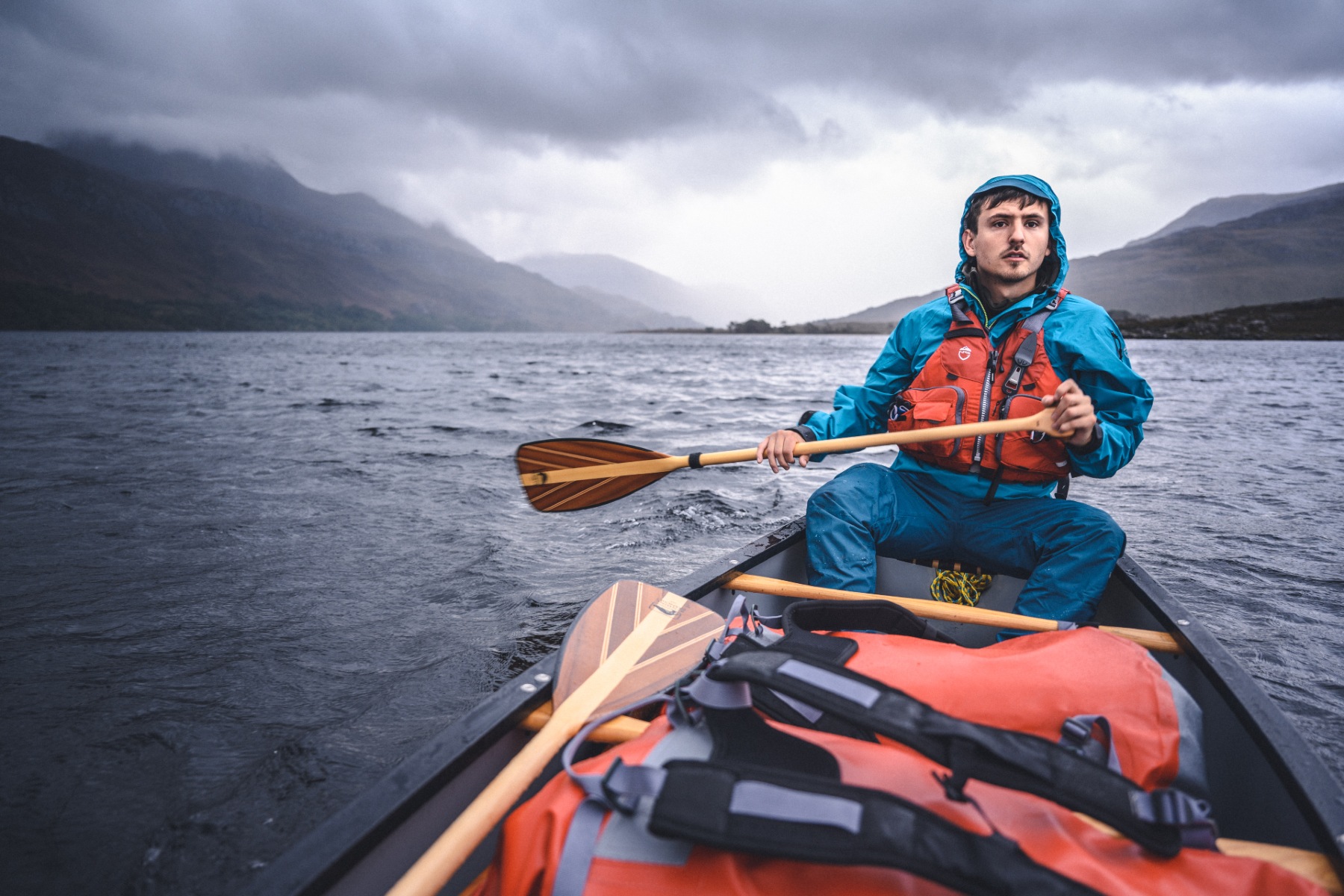 After a few hours of calm paddling along the southern banks of Loch Maree, we reached the western end of the loch, where we began navigating a network of islands. Each covered with Caledonian pines and rich vegetation that served as a fantastic reserve for the diverse wildlife. Renowned for being some of the last surviving natural environments in Scotland, the habitats on these islands have changed very little in the last few millennia.

As we moved later into the day, we set up camp on a tiny island. With the tents pitched and the canoe overturned to protect our gear, we watched the changing landscape as the setting sun bounced off Slioch’s quartz-covered slopes behind squalls of patchy rain clouds. Later that evening, we sat by our fire at the water’s edge, listening to the calls of red stags and the hooting and kewicks of tawny owls. We relished in this brief primitive existence, an experience we had yearned for all year. 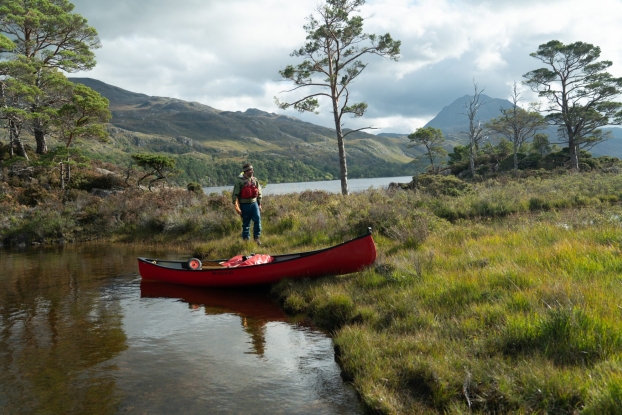 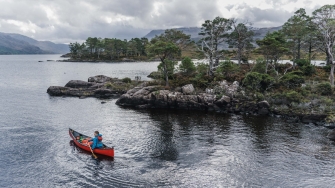 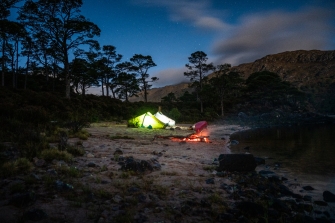 The next morning, we packed up our camp and made a small paddle to the northern banks to finish our stretch of Loch Maree. Strapping a set of wheels to the canoe, we began the six-mile portage, weaving through hills and valleys of the rugged landscape to Fionn Loch. At the highest point of our walk, we paused to take in the scenic vantage point. It revealed the ominous corner of the landscape we were headed into. Fionn Loch sat silently in the foreground.

We pushed out onto the loch with anticipation. The winds began to pick up, and large boulders started showing beneath the surface of the shallow waters, making us feel like we were navigating a minefield. A short while later, the deep roar of a fighter jet drew our attention as it came thundering out of the mountains ahead of us. Terrified that we may hit a boulder or flip the boat in the excitement of our own private airshow, we sat still and calm as the RAF Typhoon circled past and flew back into the mountains. 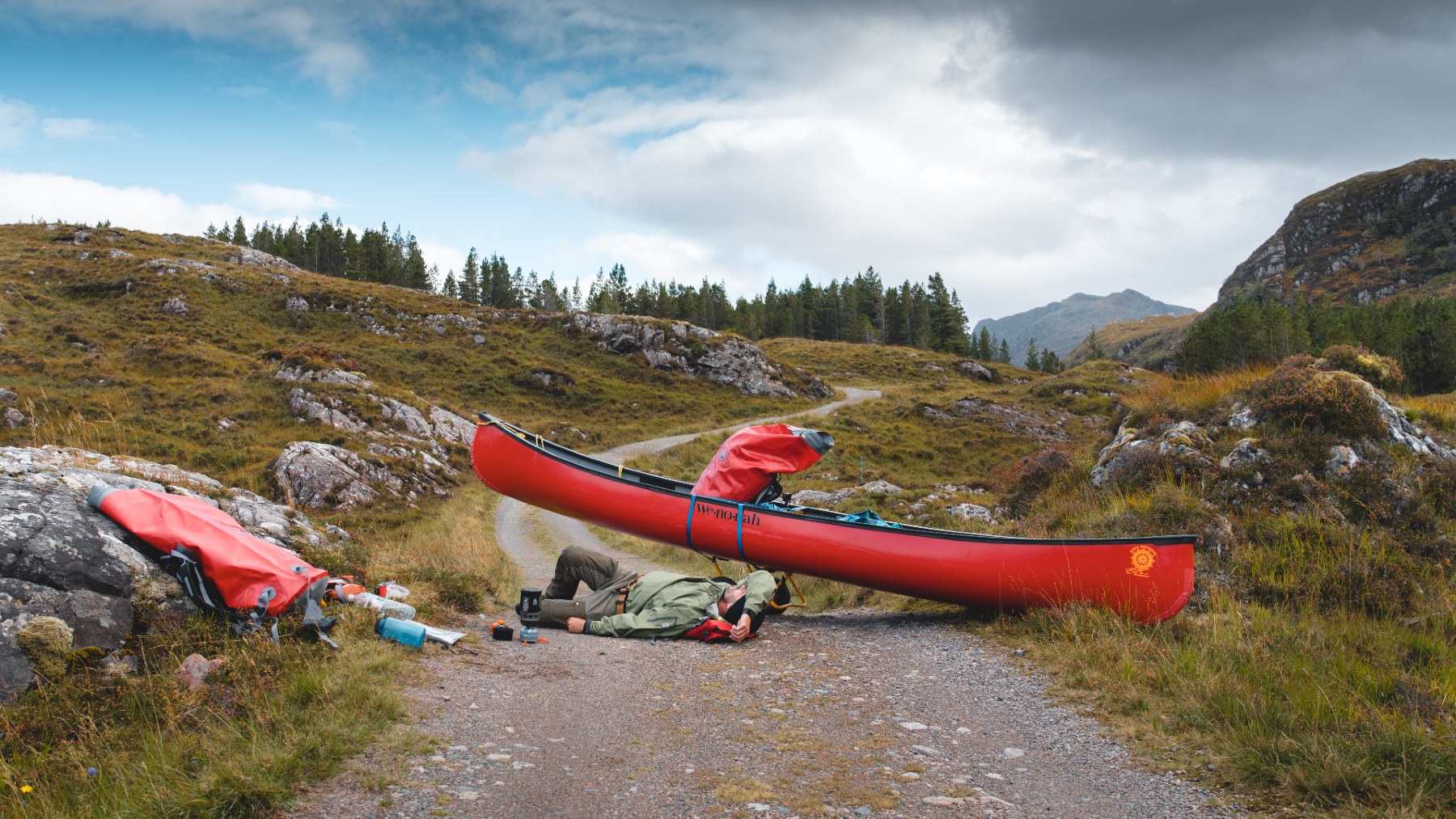 Studying the map, we noticed a remote bothy a couple of miles down on the opposite side of the loch which could shelter us from the coming weather. The only problem was getting there. If we wanted to make a direct crossing of the loch, now was our only chance. We had to consider this carefully; the consequences of flipping a canoe in the cold open water could be severe, especially with strong winds pushing us farther into the opening loch.

With a sudden lull in the wind, we felt confident enough to attempt a crossing. We paddled hard and fast, but soon after leaving the southern banks, the gusts returned, making swells so big that water began breaching the bow. We turned around and quickly retreated to the shore, being careful to minimize our exposure to the side-on wind.

Back on land, Ian suggested we leave the canoe and continue to the bothy on foot. Our tents were strong, but there was no way they would hold in the soft, spongy heather we stood on. I didn’t want to leave the canoe here knowing that we would need to come back, so we attempted pulling it over the thick heather, before quickly realizing this was not a practical option. Ian was right; we had no choice but to leave it and walk to the bothy. 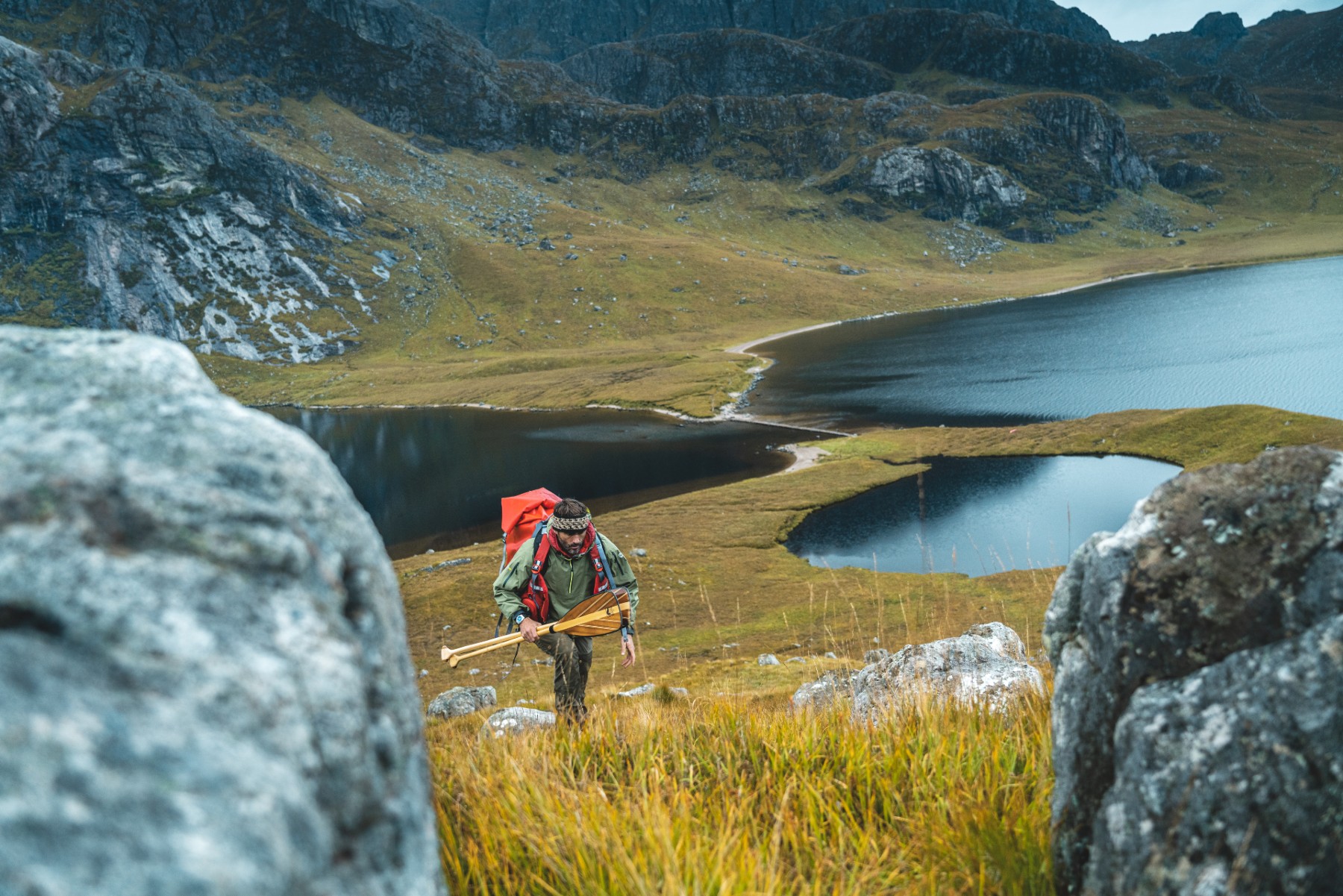 We stashed the canoe by a crag slightly inland. Carrying our heavy drybags on our backs and paddles in hand, we trudged across the rugged terrain guided by our headlamps. After three hours slogging across four miles of heather in the wind and rain, we tumbled through the door of Carnmore Bothy and were immediately surprised to find two beds with mattresses. It’s simple rewards like this that make it all worth it.

We fired up both of our gas stoves to prepare our meals, knowing that we couldn’t wait the extra five minutes for another round of water to boil. As we ate our food, we studied our new-found shelter. It wasn’t perfect, but it was certainly better than pitching our tents by the edge of the water.

Our earplugs were no match for the heavy rain and strong winds that battered the shelter through the night. With weather conditions continuing, the chances of completing our journey’s full circuit were starting to look slim. Before we could consider our options, we still needed to get back to the canoe.

On the other side of the loch, we parted ways with the stalkers and began searching the crags before quickly finding the canoe. With an absence of kit to help stabilize us, and with strong gusts out in the middle of the loch, we had to spend the afternoon paddling around its entirety. 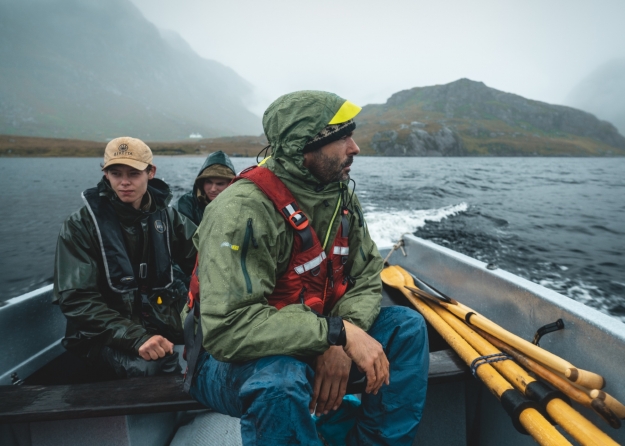 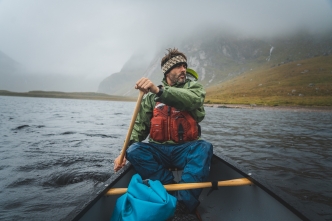 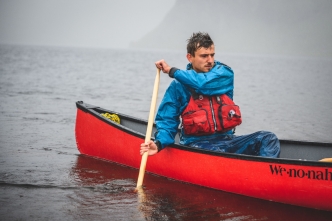 Back at the bothy hours later with the canoe stored safely near-by, we studied the map to see what our options were. The stalkers had told us the weather outlook for the next few days was not good. The intense winds at higher altitudes made portaging the mountain pass to the next loch a dangerous option. If things took a turn, we faced the severe risk of getting trapped on the other side with no phone reception or shelter. This was not a time to make reckless decisions that would involve us taking unnecessary risks. The safest option for us was to wait for the right opportunity to return the way we had come.

We spent the rest of the day at the bothy—logbooks containing records of the visitors over the last ten years made for some entertaining reading. In one account, the writer referred to this region we found ourselves trapped in as Scotland’s last wilderness, which was certainly an accurate description. Joe and Gregor later stopped by on the way back to their lodge, and kindly provided us with some trout they had caught in the loch. We spent the evening with them sharing stories of our adventures and listening to their wealth of knowledge about the local environment. 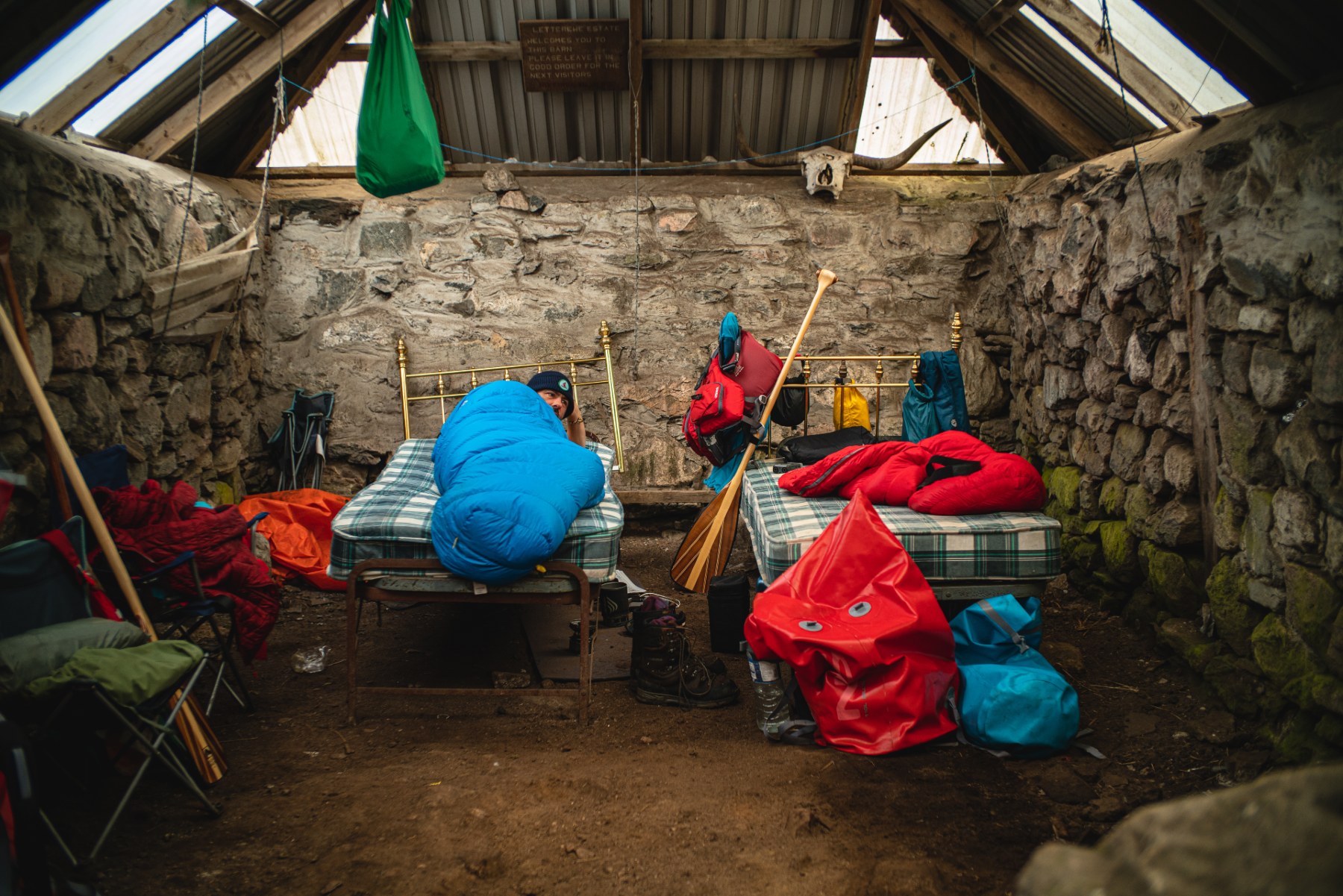 I’ve always believed that the outdoors can be a great teacher if you listen to the lessons it teaches. Nature always manages to find a balance, meaning good things will often come after the bad. The next morning, conditions had calmed just enough for us to make our exit. With quick haste, we packed up our things and made our way to the canoe.

We knew that to get back to the jetty in time, we had to make a paddle straight across the loch as we had no time to go around. Pointing the bow to the opposite side of the loch, we paddled as fast as we could to make the most of a lull in the wind that lasted just long enough for us to make the crossing. Relieved to be on the southern side, we began dipping in and out of the safety of sheltered bays waiting patiently for the wind to let us hop to the next. After an exhausting few hours battling the elements, we finally made it. 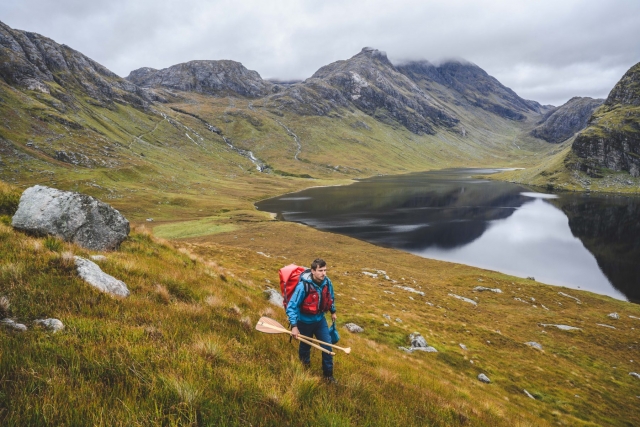 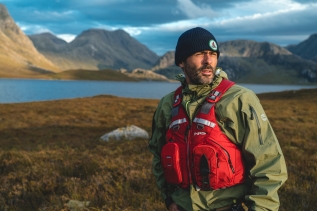 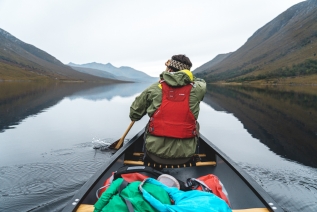 Back on accessible roads, we strapped the wheels back on to the canoe and began an eight-mile portage to a town called Poolewe, where we could arrange transport back to the car. We continued walking into the darkness until we found a suitable place to pitch up for the night.

The next morning, we walked the remaining miles into Poolewe, finishing outside of a quaint little cafe. Looking back on our journey, we remembered that expeditions are never without their adaptations and challenges. There was no destination in this journey; it wasn’t even about completing the circuit. It was just about being out there with all of the things that came with it. Through all of the hardships, we came out the other side with a sense of achievement that is difficult to find anywhere else. Perhaps that is what drives us to do these things, time, and time again. 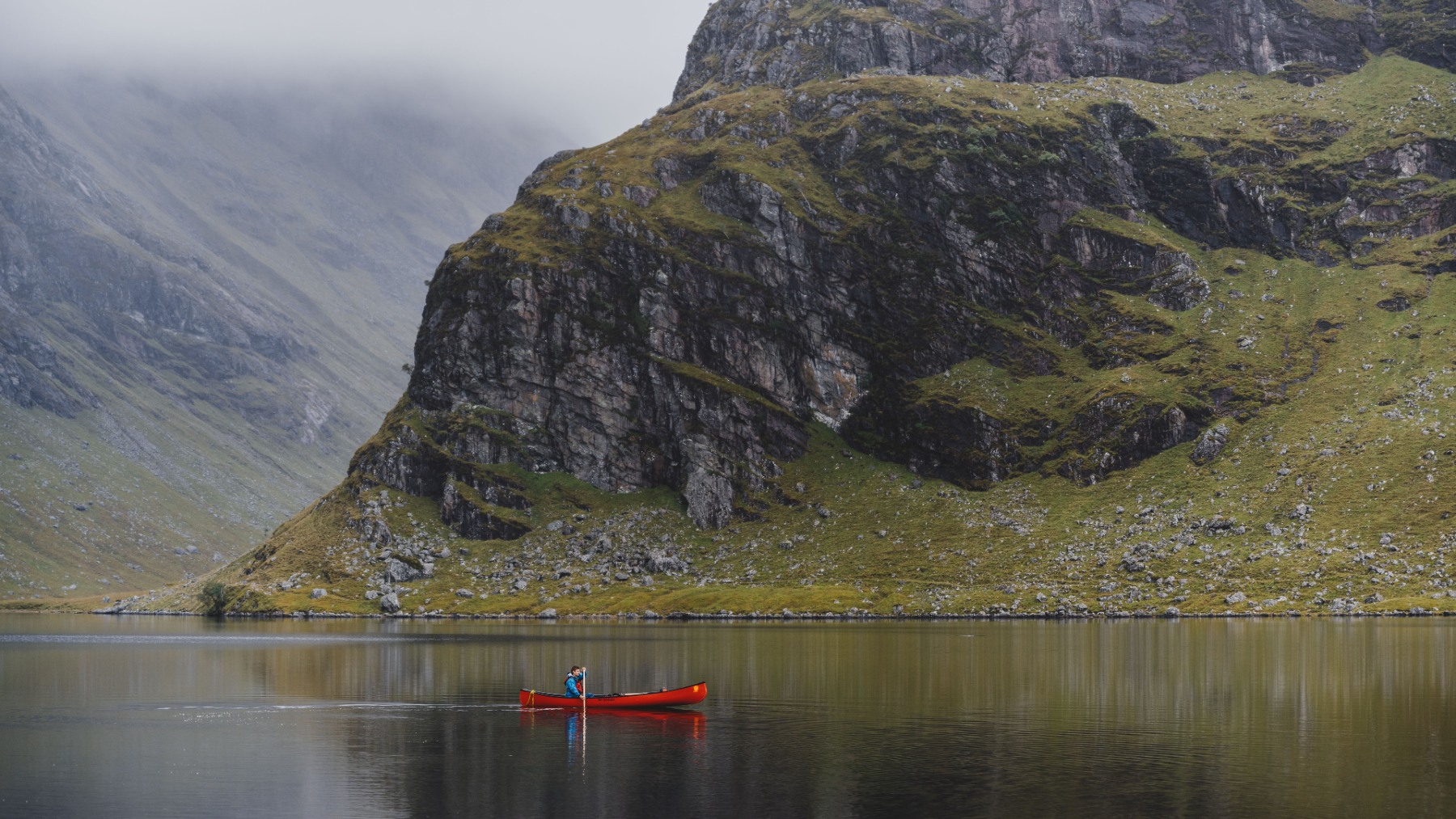 Editor’s Note: Guest contributor Jamie Barnes gets paid to produce video games in the UK. He spends his free time hiking, backpacking, climbing, canoeing and practicing bushcraft and then sharing his adventures in hope of inspiring people to get outdoors and reconnect with the natural world.