Extreme Tramping: A Hike-to-Paddle Adventure in the Olivine Wilderness

We were somewhere in the dense bush of New Zealand’s wild West Coast battling the unrelenting undergrowth. Sweaty, bleeding and tired—but stoked. Despite knowing where we were geographically, as we searched for a route amongst the bluffed-out ridges, landslips and cliffs, the countless dead ends made us feel lost. This emulated the description of Type 2 fun, a challenge that seemed to be never-ending. It was tough going. We crashed through the forest, our pace slowed to a brutal half-a-kilometer an hour. We were dehydrated and hungry, but we couldn’t help to feel in our element getting amongst the very best of what New Zealand has to offer as part of our ‘Extreme Tramping’ trip. 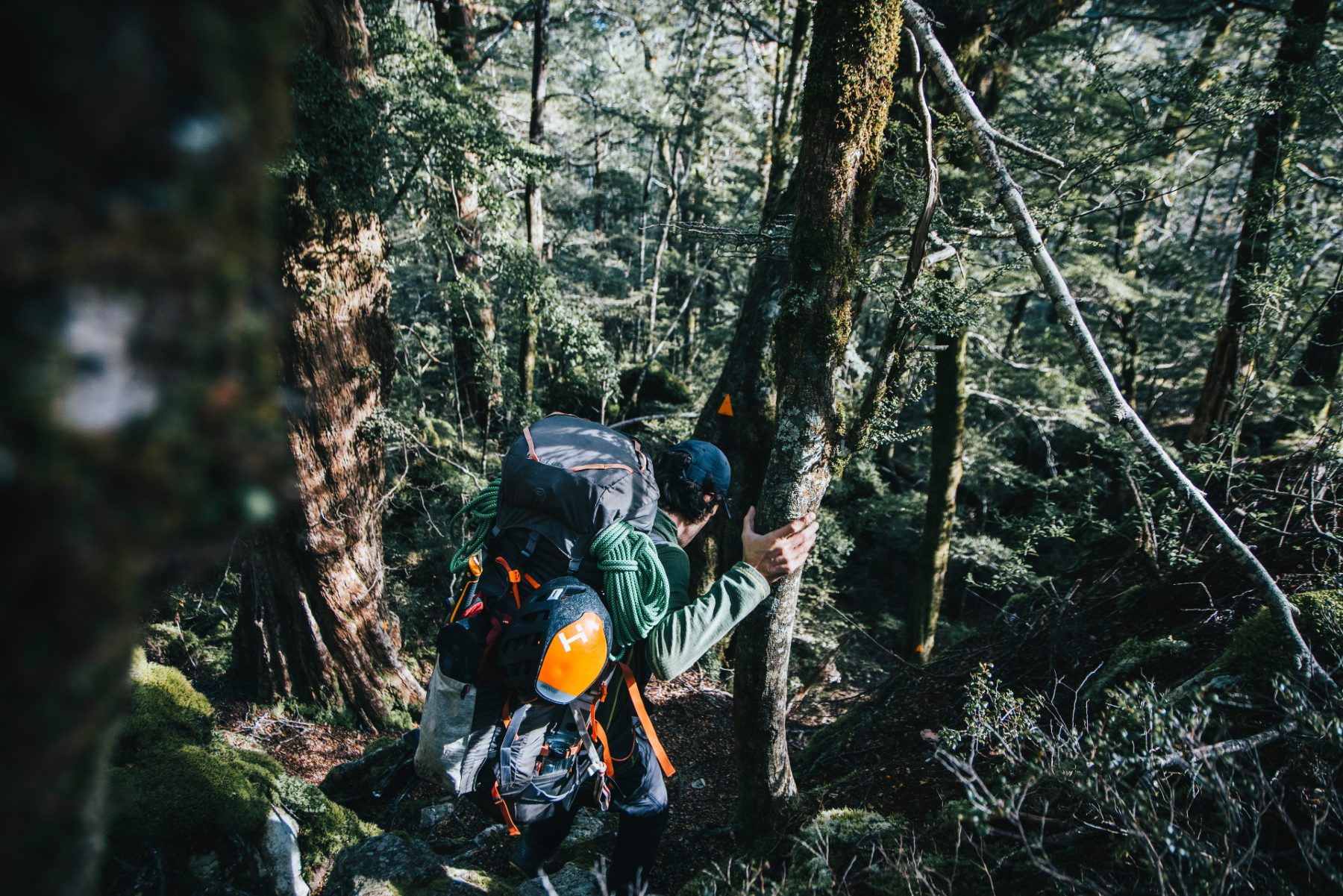 Seven days earlier, in a rush of logistics and gear, we’d set out on an epic Covid-inspired adventure into the heart of New Zealand’s backcountry. As the Air NZ bird descended into Queenstown, we caught a first glimpse of the terrain we were heading into. Our trip was ambitious, one that some had loosely spoken of but never planned. But now, with international travel off the cards, we decided to explore our backyard.

We planned to traverse through the Olivine Wilderness Area and then paddle the famous Arawhata River to Neil’s Beach. Alpinist Alex Hillary joined my mission and the two of us ventured into the heart of a remote, untouched wilderness zone. A place filled with stunning scenery, steep terrain and unexpected adventures. 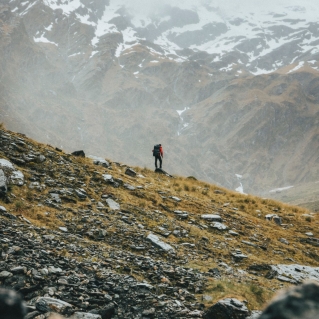 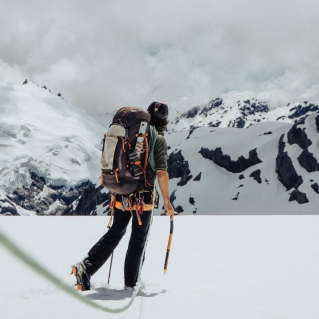 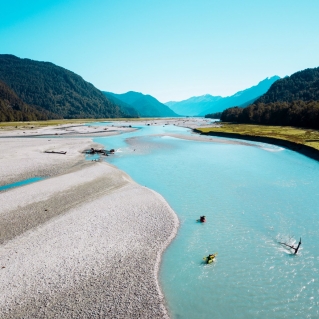 This trip had a few moving parts. Land in Queenstown. Pack as many freeze-dried meals into our packs as possible. Sort packrafts and equipment. And finally, travel 60 kilometers to Glenorchy. It couldn’t have been an easier start of a journey into the elusive Olivine. We’d barely bought a Ferg Burger before Huw and Harry from Queenstown Packrafting had tee’d up our logistics and kit and by dusk, they had dropped us at the Routeburn Track trailhead.

The Olivine is somewhat sacred. It’s the argued home to the mountains of the gods. It’s a place of wilderness and rugged terrain, home to big mountains, bad weather and many failed trips. Choosing the right route can make or break a mission to the Olivine. It’s a paradise out there, albeit, made up of brutal and unrelenting country. In the Olivine, short distances can easily turn into daylong ordeals and the ‘should be all good from here’ never quite eventuates into reality. We treat rivers as roads in a place like this, and our plan relied firmly on our ability to paddle the river to get out of the wilderness. 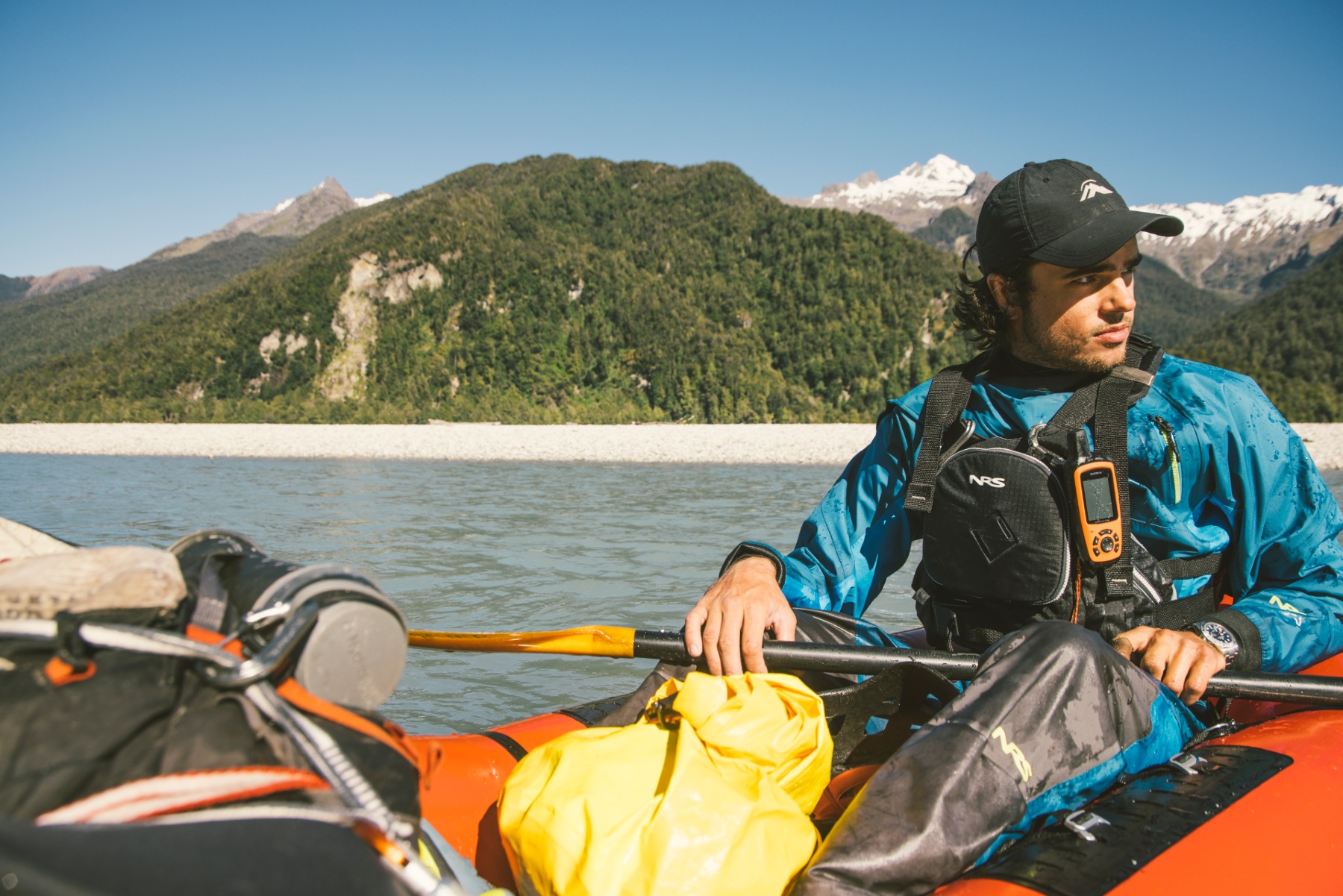 Off we went, clambering into the Beech Forest and quickly moving from the pristine Route Burn Track, over the Sugarloaf Pass and into the Beans Burn. Alex and I began to joke that just getting to the foot of the Olivine Ice Plateau with our brutally full packs would be a challenge. 33 kilos in total slung over our shoulders, laden with gear for our multi-discipline traverse: climbing gear, ice gear, rescue equipment, camp equipment, camera kit emergency equipment, and that’s all before we get to the essentials such as food.

From here we disappeared into the backcountry following the slowly diminishing track through Theatre Flat, over park and cow passes before dropping into the headwaters of the Olivine River and the Wilderness Zone. 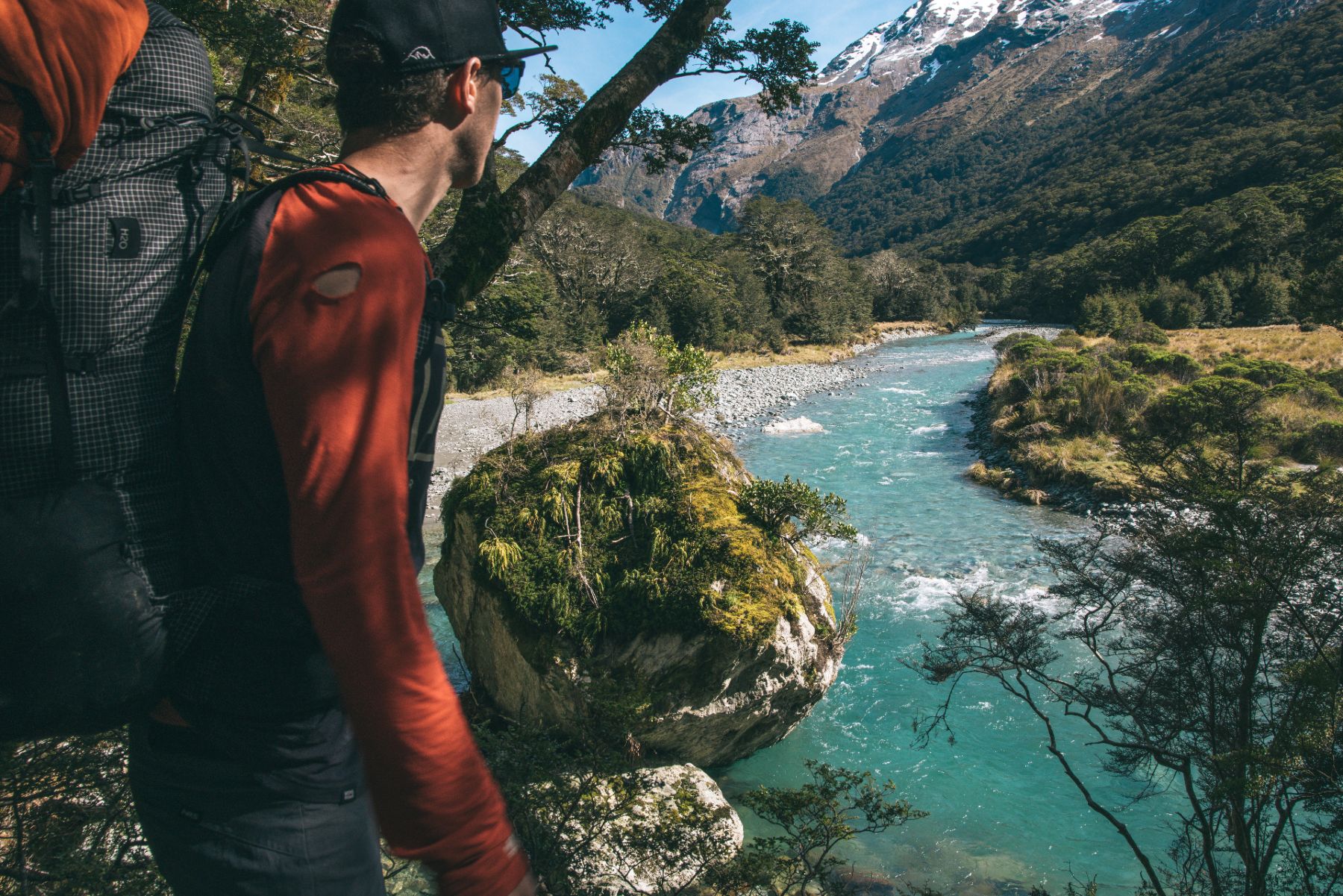 Entering the Wilderness Zone made us feel instantly more remote as we floundered around attempting to follow the river. Up until then, it had been relatively easy going, but the river had an elusive nature as it disappeared into gorges, rapids and deep pools. We swam, climbed and negotiated our way downstream, constantly crossing Its crystal clear but freezing water from side to side. For 13 hours we battled our way down, climbing around rapids and gorges or fording through the pools.

The toughest section of the route required us to negotiate some difficult terrain and slowly work our way to the confluence with the Forgotten River. Right at dusk, we found an epic little camp spot. Early the next morning we started the journey into the Forgotten, and the higher up we wandered, it became evident this place had, in fact, been forgotten. 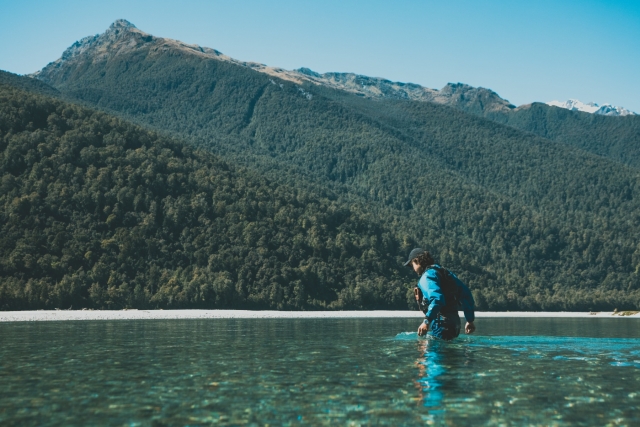 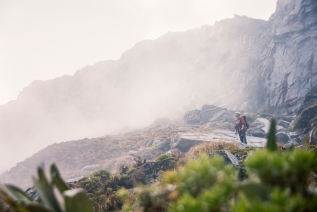 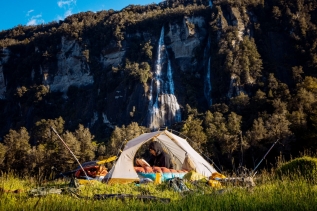 The steep mountain ranges began to surround us. The craggy peaks towering above until rain and fog engulfed the rock. Horrific weather slowly descended into the valley and set in for the night. Up ahead the Olivine Ice Plateau tried to break through the thick cloud. We clambered through the wet, slippery and steep tussock sections until finally arriving at our destination. But the weather forced us to wait.

A giant boulder wedged into the side of the mountain created a dry and sheltered ‘bush hotel.’ We eagerly welcomed the rugged respite from the raging storm. Camping out at the base of the Olivine Ice Plateau in a historic bivvy gave our aching muscles a chance to recover. 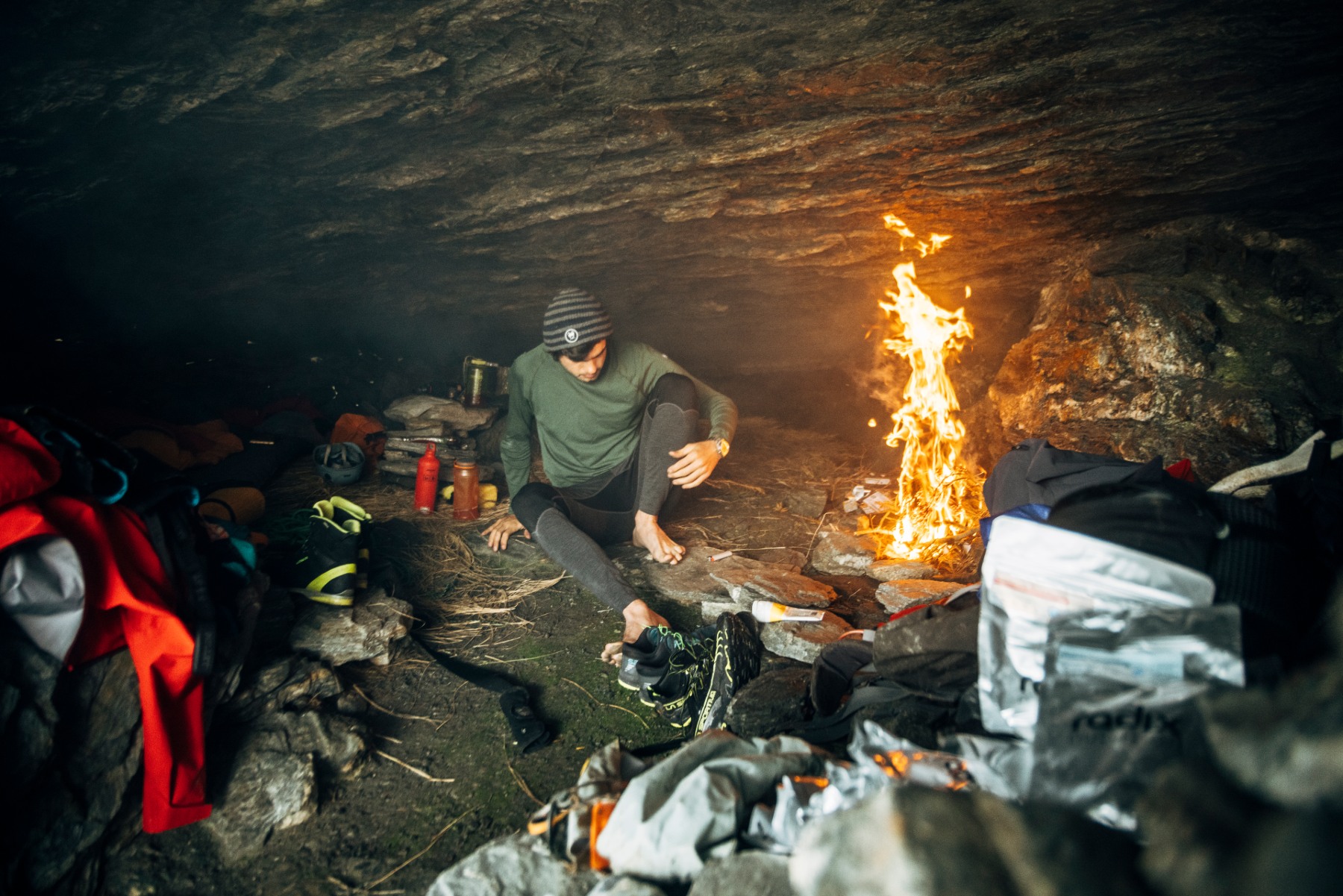 When the storm passed, we headed into the alpine area. Over the Forgotten River Col, we climbed the final 1000 meters and worked our way through a maze of cliffs, bluffs, snow and streams. The trek was all time. As we got higher, the sun began to burn off the thick clouds and we could suddenly see where we were.

High up above the Forgotten River Valley, the sounds of avalanching ice and the crunch of snow under our crampons occasionally pierced the silence of nature. We hit the climax peak to the east, which towered over the Thunder Glacier. From there, we traversed the Memorial Icefall on our north-west route down the plateau toward Futurity Rock.

The weather was bluebird and clear. The clouds dissipated and the weather stayed clear as we began crossing the Plateau slowly, roped up and constantly on watch for hidden crevasses. But just as we reached the edge of the plateau, high clouds circled above, threatening to deteriorate. 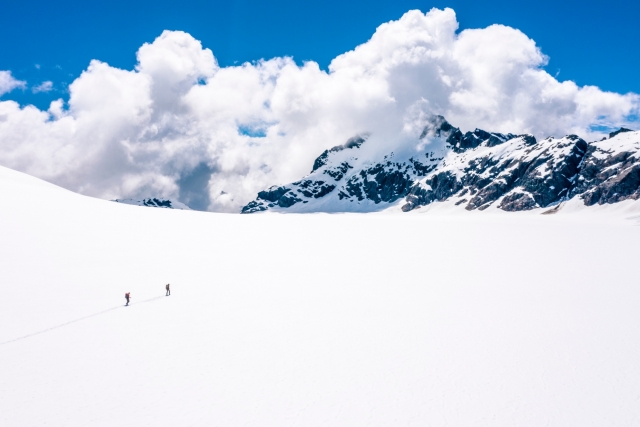 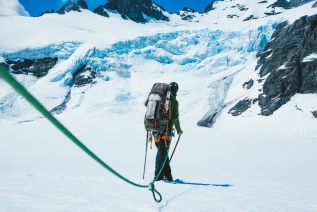 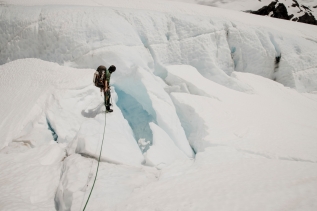 We’d successfully crossed over, but challenges were still ahead. We stood on the edge of Futurity Rock, as the horizon dropped off the edge of the world toward Lake Williamson far below. We began working our way down the couloir toward the Williamson River and the outflow of the Andy Glacier. As we descended into the bushline, massive drop offs, steep tussock lined slopes, creeks and other tricky sections kept the tension high.

The Williamson River, an unknown tributary to the Arawhata River was our first hurdle. The river raged. It was too big for our packrafts, so we started portaging. In the first gorge, the river dropped some 500 meters (1500ft) within a very short distance. Despite its challenging accessibility, there is serious whitewater potential in this region. 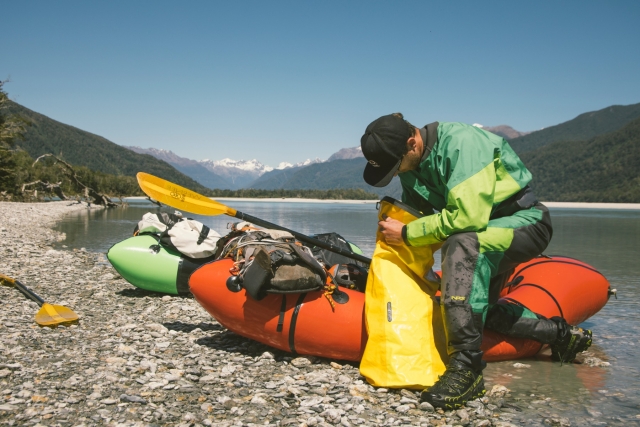 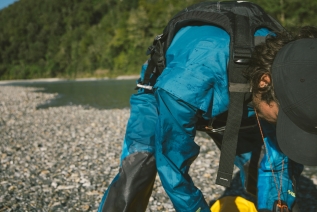 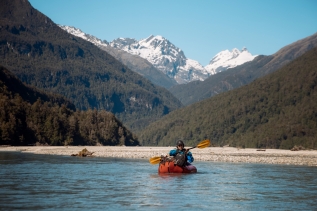 As we arrived at the Arawhata River, we found the river dropped off the face of the earth—or so it seemed. Our route through 10 Hour Gorge was the toughest of the trip. We stayed low to scout it, a decision that lead to tormenting steep gullies, landslides, bluffs and some ‘extreme tramping’ but magnificent views of the rapids hidden in this gorge. There’s no doubt we will be back with whitewater kayaks.

Many hours later the gradient of the river slowly subsided and we jumped into our packrafts. Lashing our packs to the front we started meandering through the Arawhata River Valley and out to the coast. The Mt Aspiring National Park in the background, the Haast Ranges to our right and the Barrier Range on the left mad for an incredible wilderness backdrop. We slowly ticked off the 50 kilometers to the first road bridge at Niels Beach. We’d covered the holy ground of New Zealand’s wilderness in an epic multi-disciplined expedition. 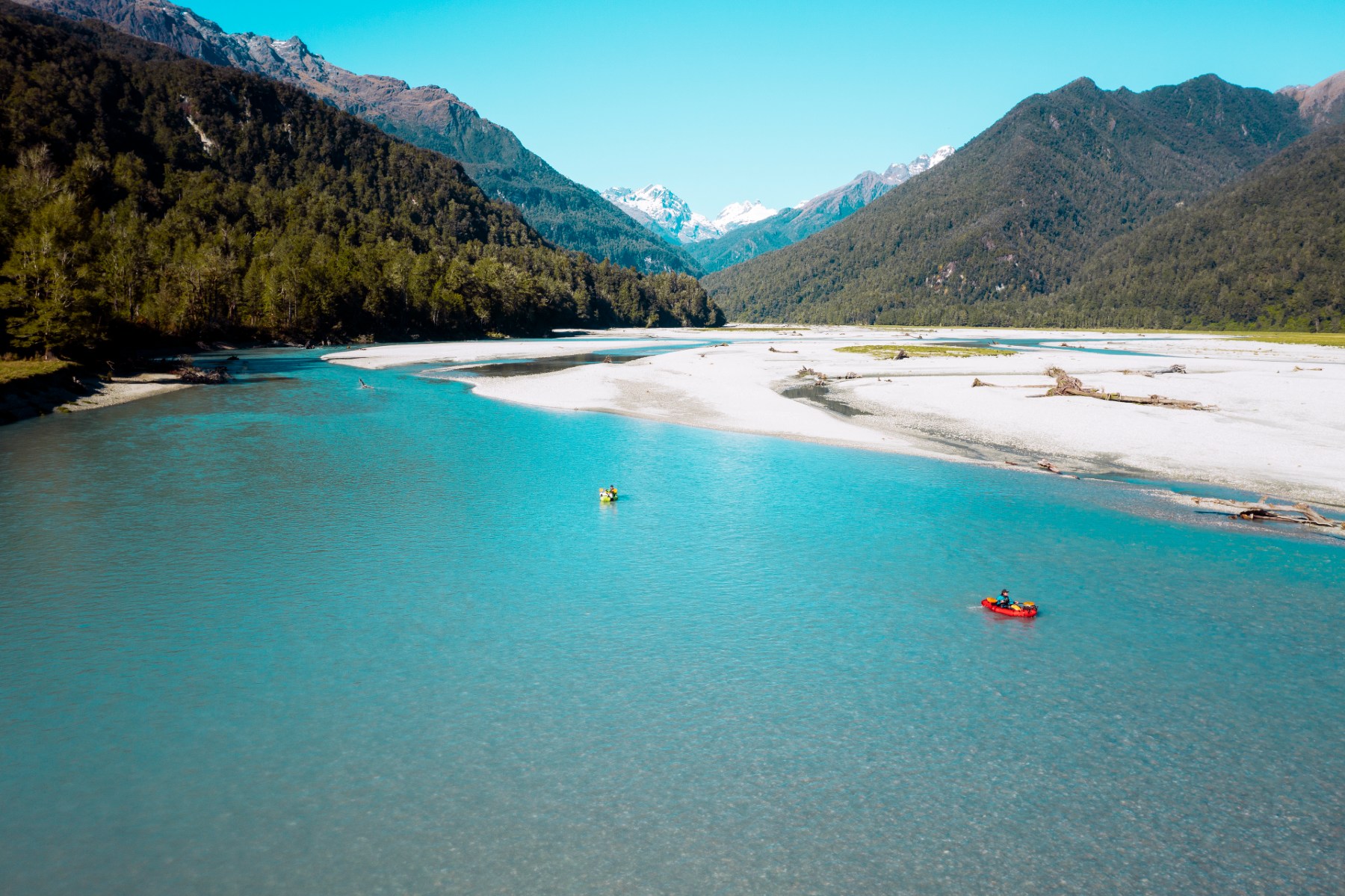