Paddling Through the Seasons on the North San Gabriel River

I paddle all year round. While there are a few days when it’s just too cold, usually with precautions (shorty wetsuit and some layers) I can paddle most of the winter. The water temperature rarely drops below 60, but of course, that’s plenty cold enough to be harmful if I fall in (which happens now and then!). While I’m paddling solo, I’m never far from a house or cell service, and I’m fanatical about wearing a life jacket.

This past summer I turned 65, so I decided I should set a goal for 2020 to get out on the water at least twice a week. To keep myself honest, I started keeping a log of my paddling. By the end of the year, I had logged 125 trips (an average of 2.4 per week), with an average length of about 1.5 miles. The longest was 5 miles on my birthday. 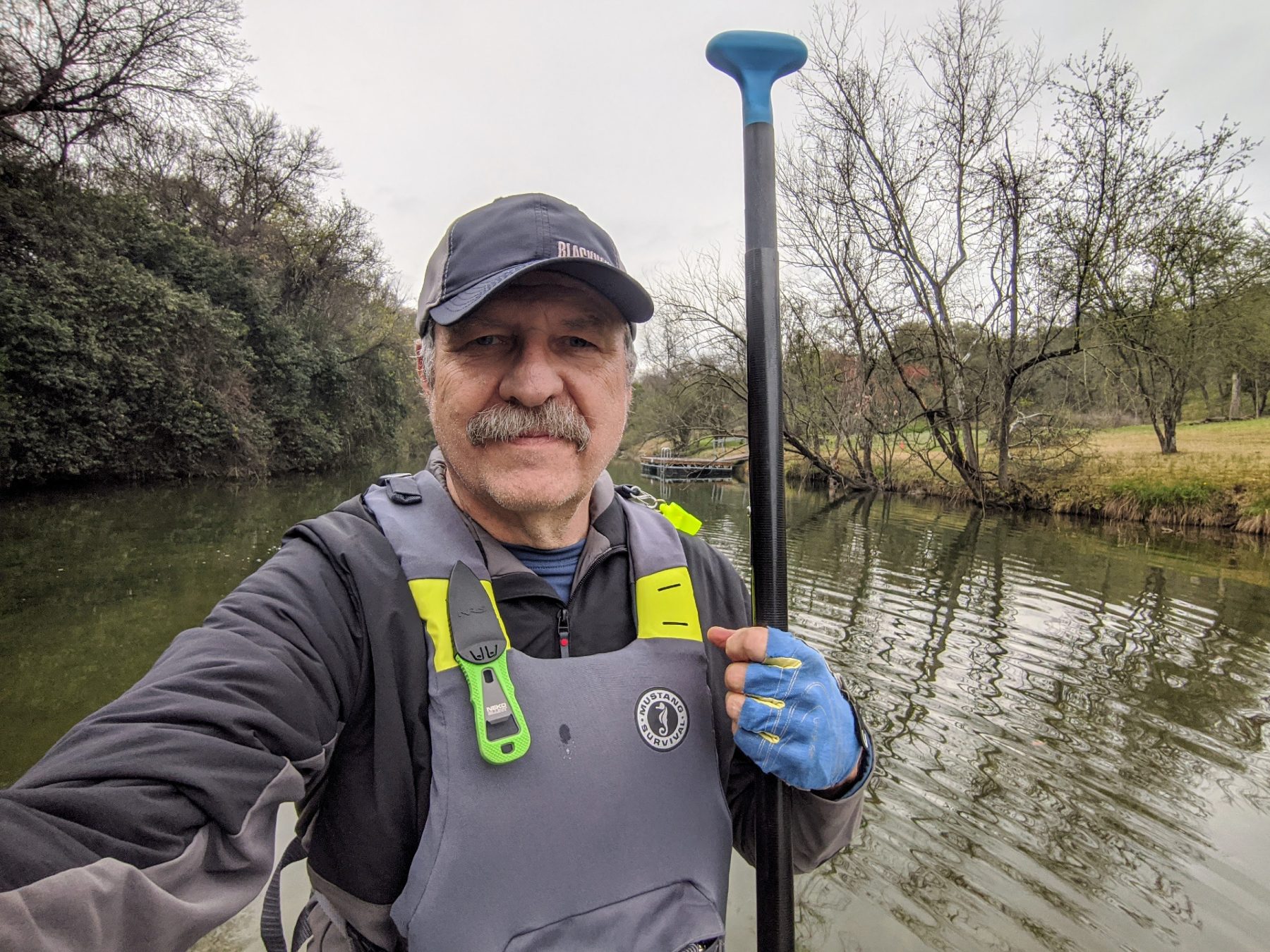 I discovered stand-up paddling late. Throughout high school, I canoed, and took up kayaking in college and have done both off and on ever since. I really started getting re-engaged with paddling when my sons were in Boy Scouts and then Sea Scouts. As they aged out, I continued on as a Sea Scout leader, focusing on all kinds of boating from 100-ton vessels down. At the time, I noticed that the kids were keenly interested in stand-up paddling, but I really didn’t get the attraction. I mentioned that to my old friend, Kip Peterson, who said that he didn’t get it either, but planned to go find someplace where nobody knew him so he could try it out without embarrassment.

That actually seemed like a good plan, so with a bit of research, I found that our local REI ran introductory SUP classes down at Spring Lake, between Austin and San Antonio. Fifty dollars for equipment rental and a couple of hours of instruction seemed reasonable, so I signed up. I can’t imagine a better place than Spring Lake—it’s a beautiful, crystal clear spring-fed lake. The REI instructor, Boris, was actually quite good—knew his stuff and was a good teacher, and most importantly was able to help an experienced paddler like me adapt what I knew to a new kind of boat with very different handling characteristics. 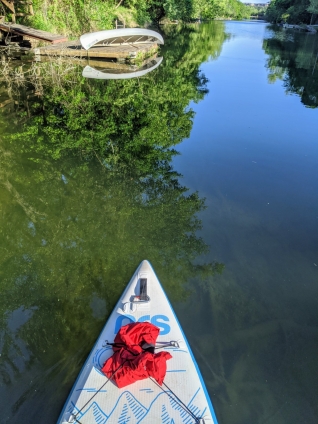 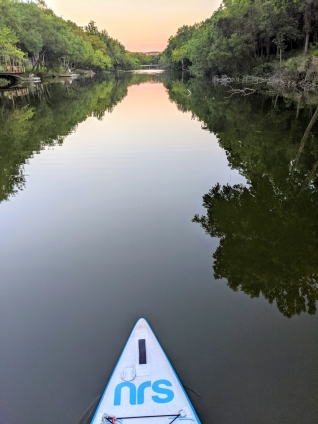 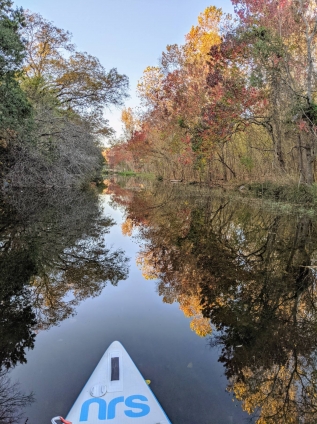 The biggest insight was that you have to flip your J-stroke over and put the hook at the beginning because the fin renders it ineffective if used toward the tail. I got a lot out of that two hours and had a blast, and within a few days, I had bought myself a board. I found a perfect paddling location on the San Gabriel river less than a mile from my home. An old concrete dam creates a flat pool about 2/3 of a mile long, with an additional 1/3 of a mile possible with a short portage over a rocky ledge.

I found that I could slip out after work, toss the board on my truck and be on the water in only a few minutes. To me, the simplicity of handling and launch and recovery is one of the biggest attractions of SUP. There’s no other kind of boat where I can get a useful amount of paddling done in only a bit more than an hour spent away from the house. So, for the past three years, I’ve spent a lot of evenings down on that river. Usually, it’s essentially flat water, but when there is a lot of water coming out from under the dam at Lake Georgetown, it can move along pretty well.

I’ve come to delight in the wildlife I see. Although that stretch of river is right in town, with no place more than 300 yards from a house, it hosts a rich ecosystem with water birds, fish, turtles, even the occasional beaver. I especially enjoy the Great Blue Herons, but also the Golden Crowned Night Herons, the Osprey, the Kingfishers, the Snowy Egrets and lots more. My favorite fish are the spotted gar—they’re such amazing swimmers. And of course, there are turtles all over, scurrying around the bottom. One of the most fun things about SUP is the vantage point to see down into the water and watch what’s going on down there. 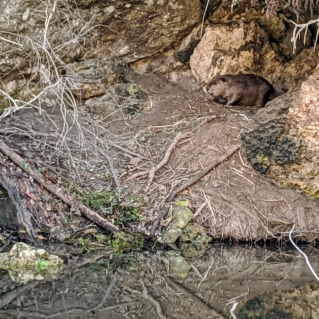 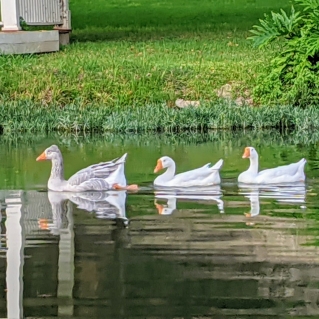 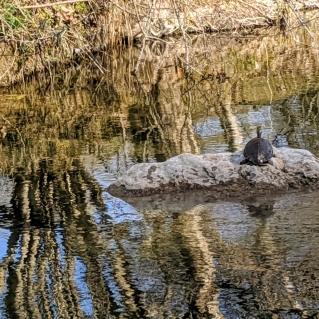 After a few months, I decided I needed a more advanced board, and I really wanted an inflatable, so I picked an NRS Escape, wanting to be able to undertake longer trips. In retrospect, I might have been better off with a more stable board like a Thrive, but I’ve come to love my Escape.

As I’ve mentioned, I have a lot of experience on every kind of boat from an 82′ former Coast Guard Cutter to 10-60-foot sailboats to a wide variety of canoes and kayaks, but this board is my all-time favorite. It just feels so alive and such a part of me. I got the special edition commemorating the 50th anniversary of the Wild & Scenic Rivers Act. Growing up in Arkansas, I wrote letters to my senators and congressmen asking that they support that act to save the Buffalo River, so the board sparks some nostalgia, I love what it represents—and I love the graphics! 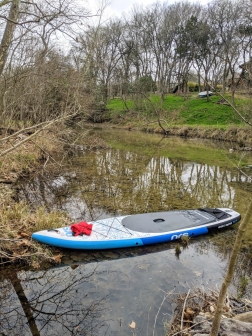 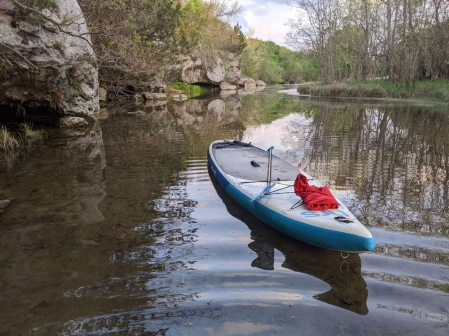 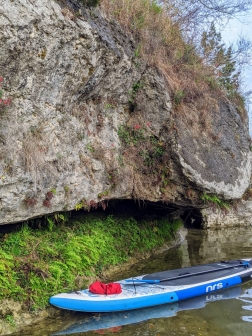 Anyway, that board and I have been quite a few places, including much of my local part of the North and South San Gabriel Rivers, the Colorado River, lakes from my home Lake Georgetown to Watts Bar Lake in Tennessee and Lake Catherine in Arkansas, but most of all here on my little dammed up section of the North San Gabriel River.

Covid constrained my travel out of the area this past year, and an unusually dry summer kept the river levels low enough that longer trips weren’t as feasible anyway, but my little stretch of river has been a wonderful way to get out of the house to clear my head and get some fresh air and exercise while staying safe and socially distancing. So, all 125 of those outings for my 65th birthday were on the same stretch of river, but with the variation of the seasons, it was never boring. 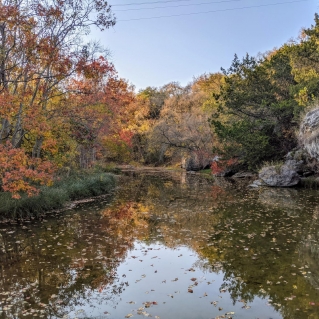 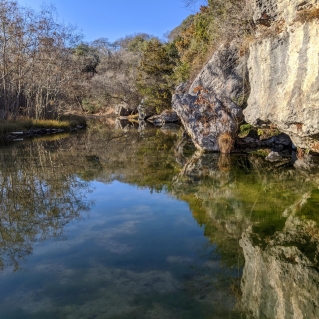 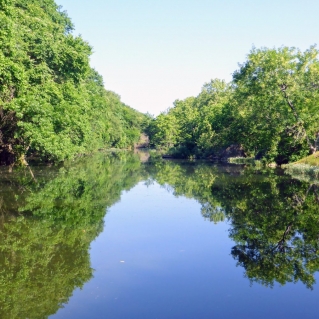 I’m off to a pretty good start for 2021, and this year hope that we have enough water that I can at least explore more of the San Gabriel. There are a few stretches nearby that I haven’t paddled yet.

Editor’s Note: Guest Contributor T.W. Cook is a lifelong paddler who lives in Central Texas and supports his paddling habit by software engineering. He loves sharing all kinds of boating experiences (especially paddling) with young people through Sea Scouts. There is not much he finds more interesting than seeing what’s around the next bend on a river.