In late 2019, a China trip came together like a dreamed reality. But first, let me take you back a couple of years to when I saw a photo of the Detian Waterfalls and immediately knew I wanted to run them. And I wanted the first decent. So, I started putting in the research. Detian Falls or Ban Gioc Falls is actually the collective name for two waterfalls on the Quây Sơn River. The falls—and the river—straddle the international border between China and Vietnam. 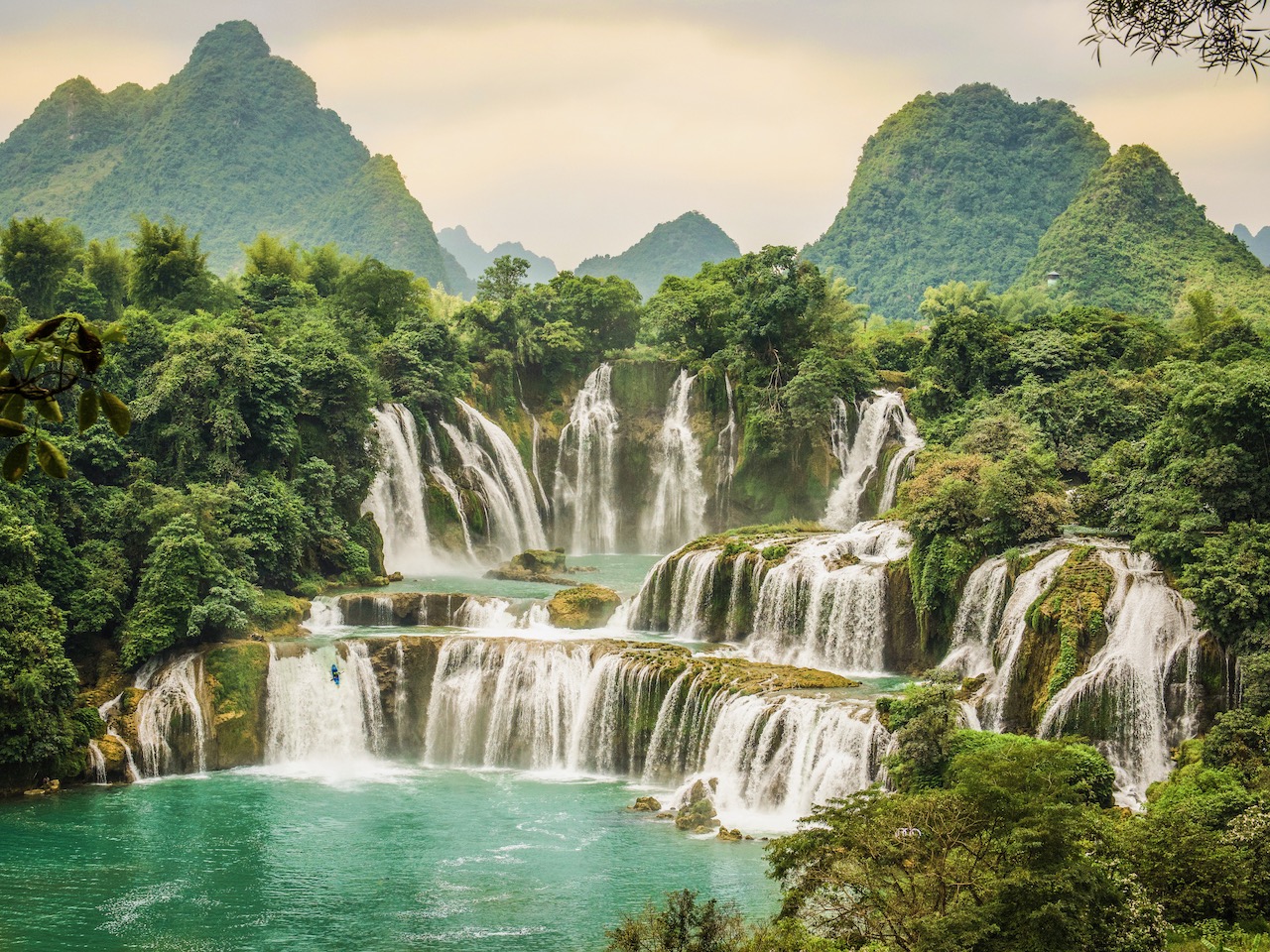 Going beyond the highlights of Wikipedia and Google searches, I realized that to access the falls, I would need to gain permission from both the Chinese and Vietnamese governments, which was extremely unlikely. But I continued to dig and proposed the project to various media and brands, all of whom shut me down. I decided to put this dream project on the back burner and pursue other projects and dreams.

Five years later, an unexpected email appeared in my inbox from a production company asking me to join a waterfall project in China for a TV show. With obvious intrigue, I accepted the invitation. I invited Dane Jackson to join. After a couple of weeks of email banter with our Chinese affiliates, a glitch in our plans forced us to change the location of the shoot. To my delight, they asked if we thought the Detian Waterfalls would work, of which I was immediately excited about. Although I knew firsthand all the permission issues we would face, I couldn’t help but feel five years of excitement bubbling up. 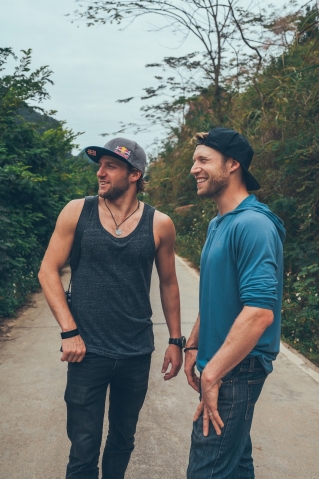 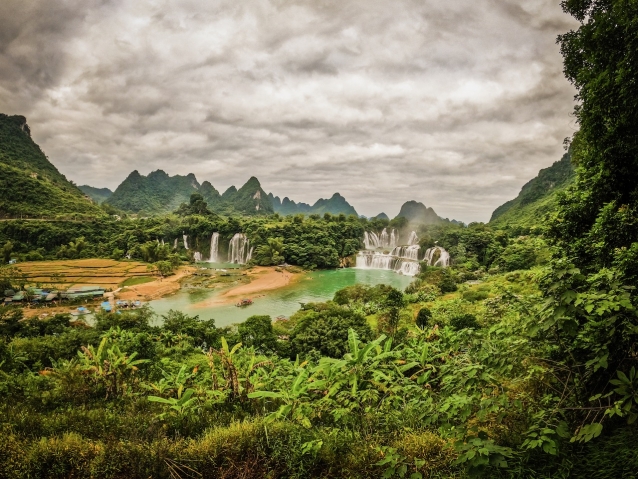 As the saying goes, “It’s all about who you know,” and our Chinese affiliates definitely knew someone I didn’t. Within only a couple of days, they had received the green light to allow us to run the waterfalls and film the first descent.

Dane and I submitted the paperwork to obtain the necessary Visas, organized a couple kayaks from our Chinese distributor, and packed our bags.

All total, with flights and the three-hour drive from the final airport to the Detian Waterfall valley, we spent 52 hours traveling. Add to that the 12-hour time difference that disrupted any chance of sleeping and you get two exhausted kayakers.

Our stomachs reminded us that it was, in fact, breakfast time, so eating noodles for breakfast, became our first cultural experience in China. (Spoiler alert: of all the Chinese food I ate, the breakfast noodles were my favorite.) Once we finished our breakfast noodles, we were both keen to check out the waterfalls that we had traveled so far to see. 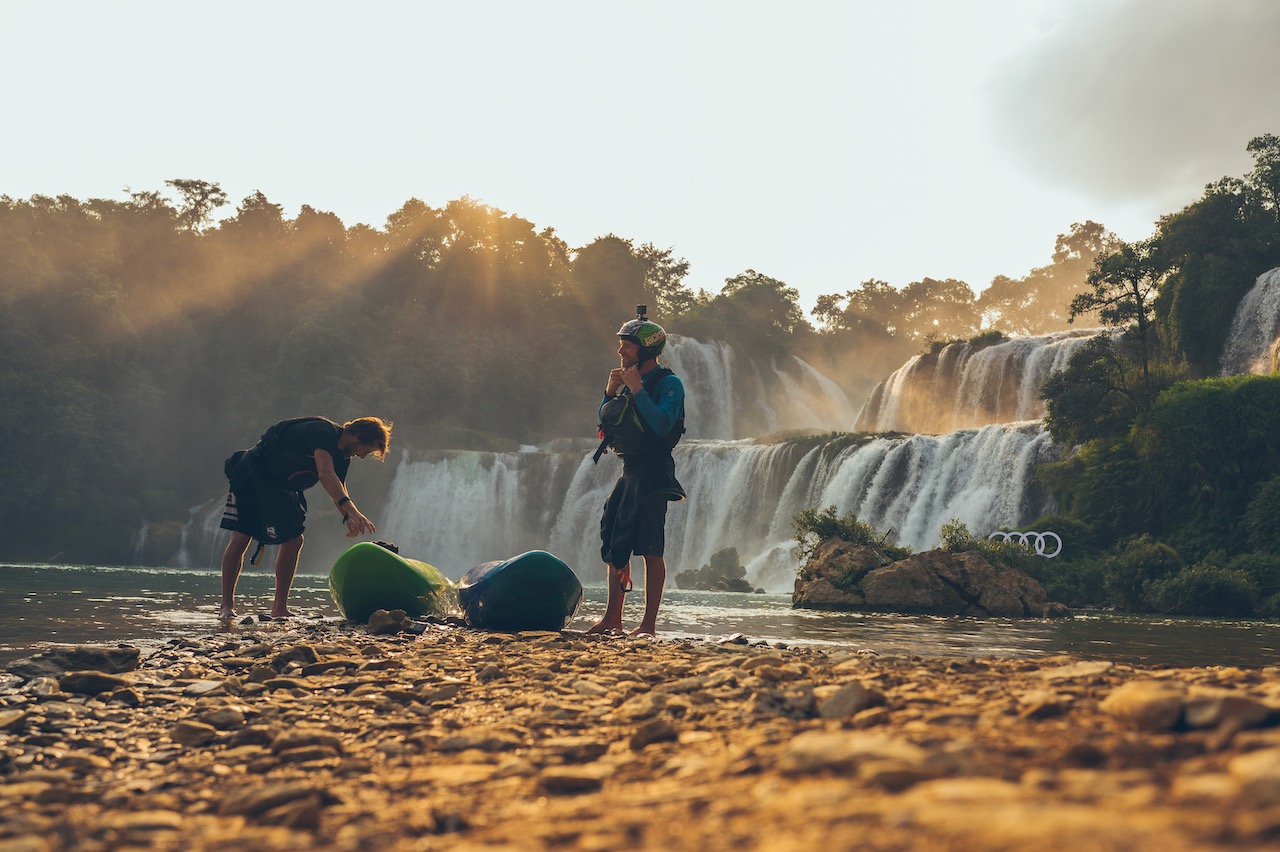 With the full production team in tow, we hopped on a bus that would take us to the falls. The waterfalls turned out to be a massive tourist attraction. It reminded me of a Chinese version of Niagara Falls with several viewing platforms and boat tours—the works. All of that made it seem even crazier that they granted us permission to kayak them.

Within those permissions, we were allowed to jump the fence and give the falls a full scout. In accordance with the permissions given to run the falls, the only restriction put in place was the simple fact that under absolutely no circumstances were we able to touch the ground on Vietnamese land, which pretty much just meant “stay on river left at all times.” The waterfalls had several different spouts and falls, some with clean drops, while others cascaded onto shallow rock. Of course, the one gorgeous looking 80+ footer that looked clean was on river right—the Vietnam side. The water levels were also a bit low and dropping, which limited our line choice.

Throughout the entire scout, the cameras rolled, capturing the deliberation and discussion on lines and safety. Somehow, we had agreed to film a full-on reality TV show. 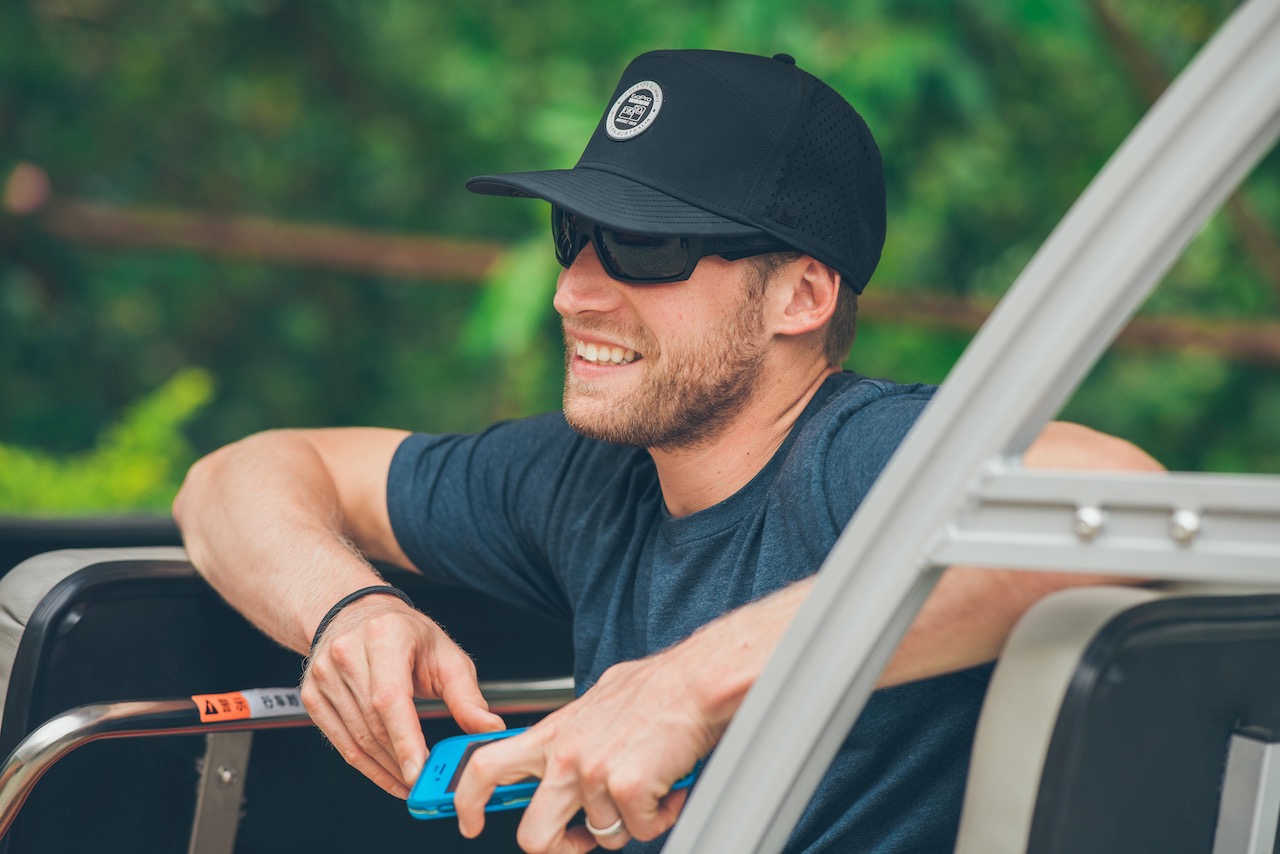 After scouting and picking out our lines on Detian, we felt ready. Though we had to wait for permission to run the drop, so we decided—with the TV crew—to check out a few nearby drops, and hopefully find a decent warm-up. The first drop was a 40-50-footer, but with too little volume and just a trickle of water flowing over the falls. Insert dramatic tension: We happened to plan our trip to China during its dry season and most of the rivers were running at low flows.

As luck would have it, there was another nearby series called the “Waterfalls of Love,” which was a triple drop sequence— a 50-foot drop, followed by a wide, 20-foot rolling drop and finished with a 6-foot boof. Plus, it had enough water for us.

Coming up to the first drop, we hopped out of our boats for a quick scout to confirm the lines. Dane went first; I watched from the lip. From my angle, his line looked great, though I quickly realized that Dane had hurt his shoulder upon impact. With standard hand signals, he communicated that he was ok, though possibly injured.

I lined up the lip, ran the entry and hit my line just as I wanted. It felt perfect. At the bottom, Dane thought he might have torn a muscle, but he was comfortable running the other two drops. 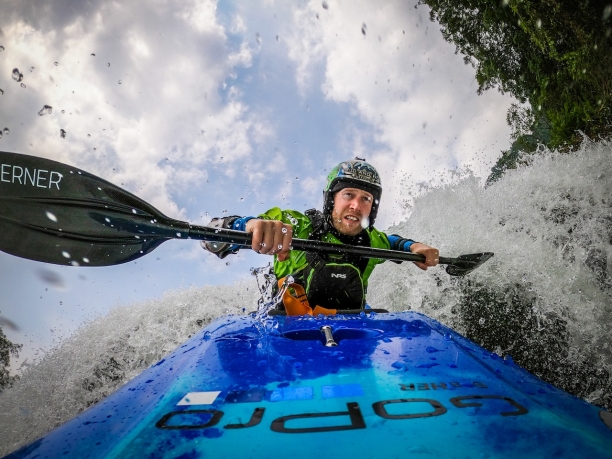 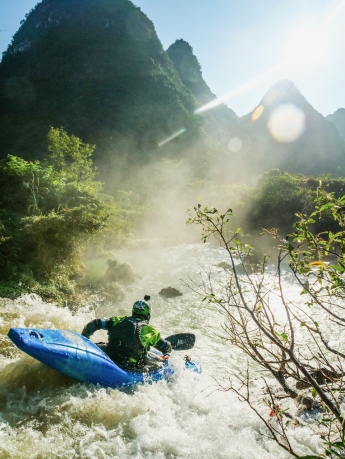 Back at the hotel, we discussed our plans for the next day and the first decent of the Detian Waterfalls. Dane opted to hold off until the next morning to make the final call on his shoulder.

Over breakfast (noodles) and coffee the next morning, Dane made the call to rest his shoulder. Instead of running the first descent with me, he would help with safety and photos.

Part of the TV show’s narrative included teaching Chinese popstar, Han Geng how to kayak. As we geared up for Detian Falls, we quickly met Han Geng, then concentrated our focus on dropping the falls. Leaving the safety crew below and Dane on a balcony to shoot photos, I started the hike to the top. I was on my own.

The original line we had been looking at the day before landed right beside an undercut. Considering I was now paddling alone, I opted for a more cautious line, skipping the drop with the undercut. The line I chose started with an 8-foot boof, with a 25-foot drop between the boof and the pinnacle 40-foot drop of Detian Falls. 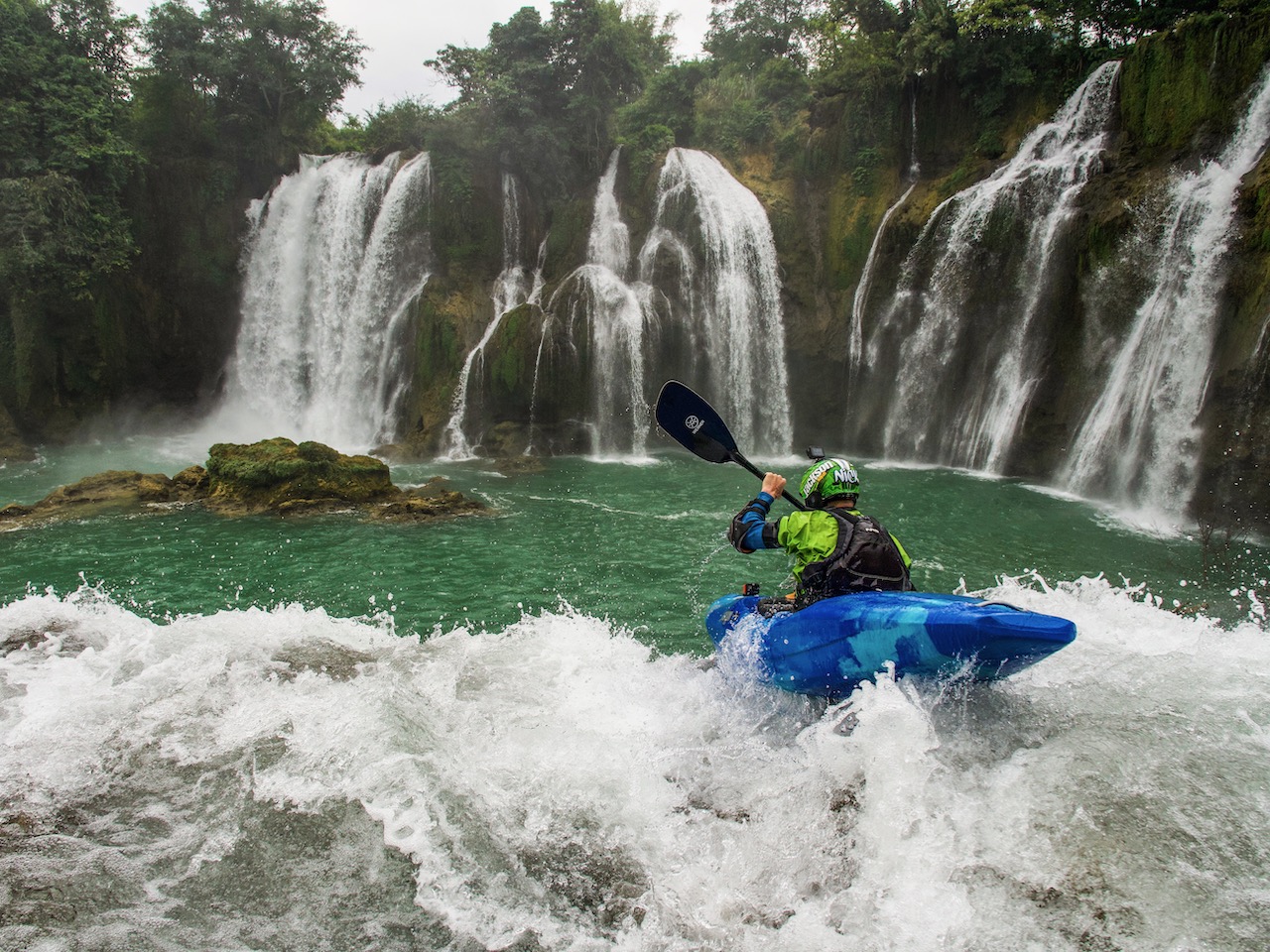 I slipped into the eddy, gave the high sign to our film crew and drone operators, and peeled out into the current. I rolled over the edge and lined up the slight kicker part way down. The intended line hit the kicker to avoid the undercut cave behind and to the right of the drop. I hit the kicker perfectly, tucked up tight and landed softly—it was flawless. I shouted in celebration with our local Chinese paddlers.

After a couple of quick interviews with our TV crew, I focused the rest of the afternoon on teaching Han Geng how to paddle. Even though we struggled with the language barrier—I know zero Chinese and he spoke little English—he was a quick learner and picked up on the strokes quickly.

We ended the day with a unique meal consisting of a lot of bugs. Apparently, the meal is reserved only for VIP guests, and they were so honored to share it with us. I wasn’t sure if that was true or just a ploy to convince me to eat the bugs, though I felt obliged to try them anyway. Though some of them (like the dragonflies), were okay, others, like the bees, were really hard to keep down. Let’s just say, insects will not frequent my dinner table in the future. 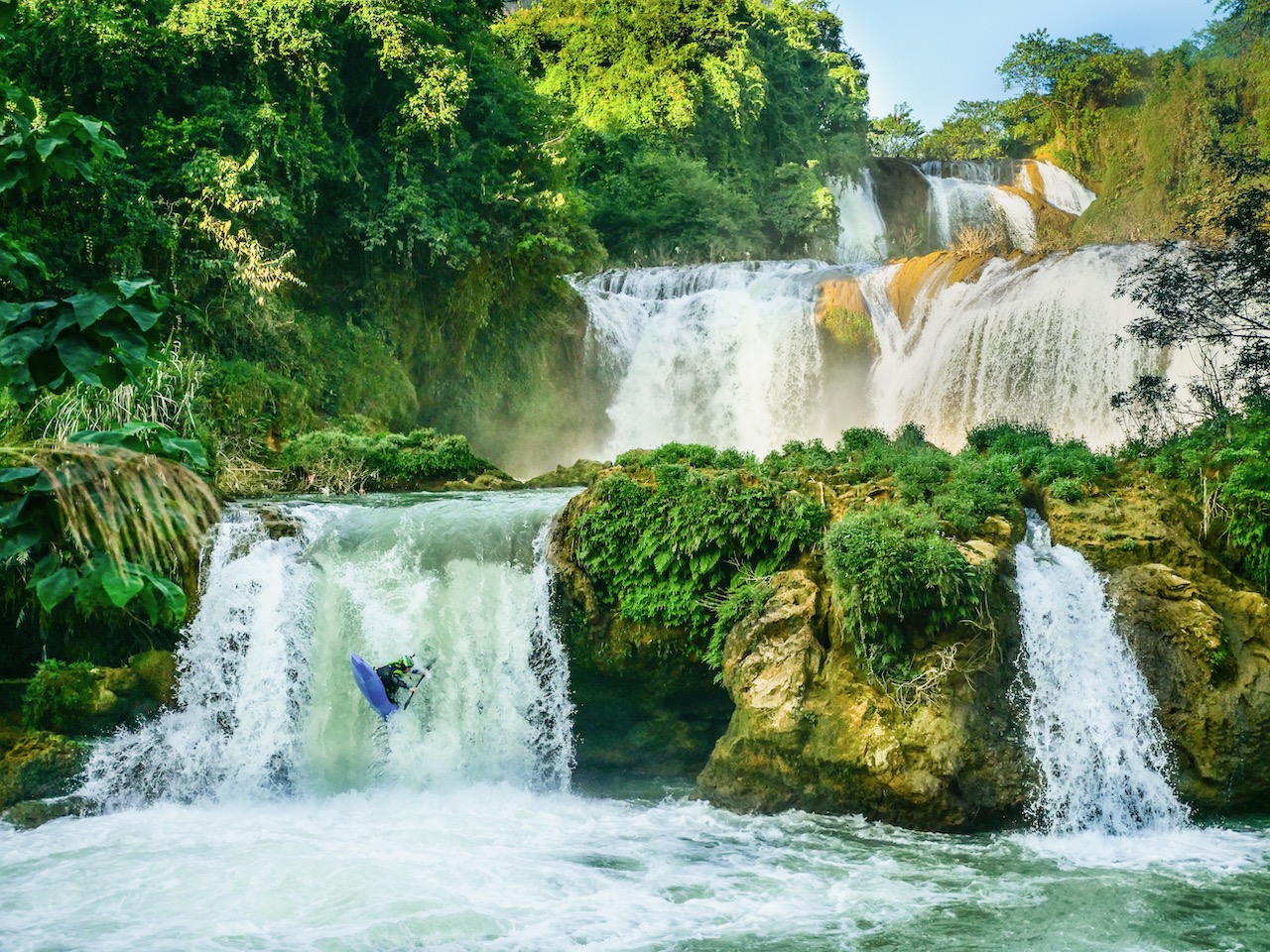 The next day was our final hurrah for Detian. Having passed on running the falls the first time, Dane was super keen to run the waterfalls regardless of his shoulder. He said it felt much better with the rest, though I knew he would paddle either way. We had
traveled too far and knew this could quite possibly be the only time we would ever get permission to do so. Always the competitor, Dane decided to attempt the second of the three tiers (the one I jumped around the day before).

So, this time Dane and I reversed our roles, as I hiked in and ran safety for Dane on the first two drops. He styled them with ease, and I then ran around to watch Dane drop the third and final of the waterfalls.

While Dane was in-between the second and third drop, a crew of armed military men came out of the jungle on the Vietnamese side. They called for Dane to come to shore. He couldn’t tell what they were saying, since the Chinese officials had given us strict orders to never touch the Vietnamese shore, Dane ignored the armed men and dropped off the falls. Dane’s effortless style sold me on the idea of paddling Detian again once the military left the scene.

I gave Dane a quick high five and congrats, grabbed my boat and went back to the top for one last run, this time trying for all three in a row. I rolled off the edge and stomped down my bow for a super soft landing of the low volume drop. Despite a noticeable difference in water levels in just the last 24 hours, I hit another beautiful line, and cleanly dropped Detian Waterfalls for a second time. 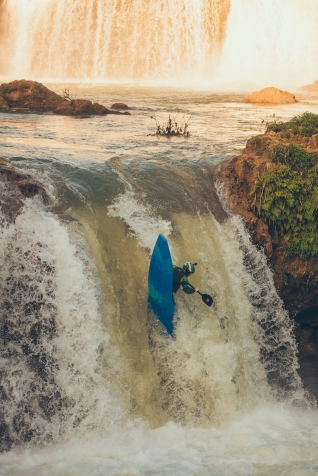 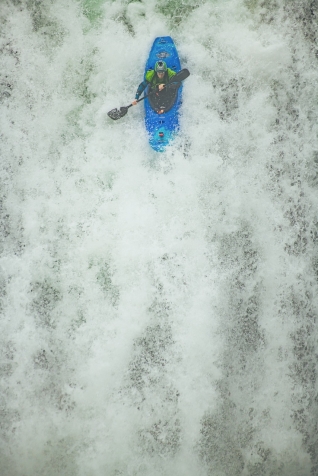 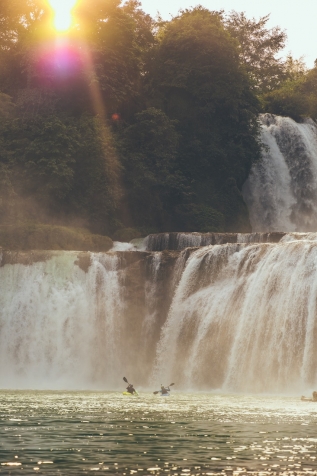 Our new friend Gang Han greeted us at the bottom of the drop with loads of stoke and high fives as our film crew documented it all. We returned to our hotel to relax over dinner—sans bugs—cold beers and an epic Chinese sunset.

On our final day in China, we filmed a few more interviews and captured some footage of us hiking around as well as the drive back to the main city. It was then that we learned that the Vietnamese government had retracted their allowance and no longer wanted us to paddle the drop, which explained the military presence.

We bid farewell to the production crew at the airport and treated ourselves to a final Chinese gastro-experience: the Hot Pot. Similar to the Swiss Fondue where you cook a variety of meats and vegetables in a simmering pot of broth or soup. Yet, instead of only eating the vegetables or meat, you ladle out your ingredients with a portion of the broth to create individual bowls of soup that you then flavor with your choice of spices and sauces. 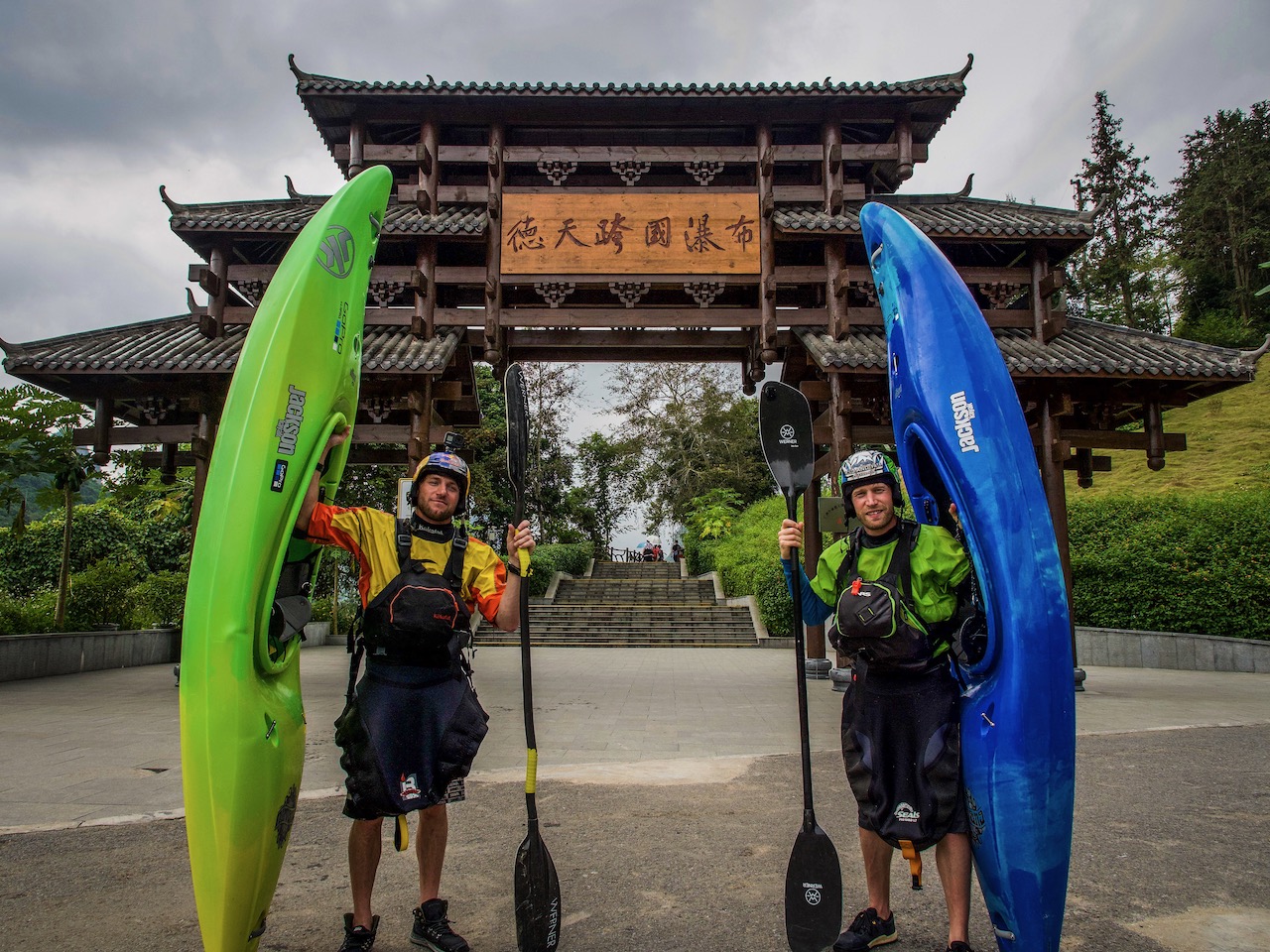 As we started our 48-hour return trip, I reflected on the experience. Claiming a first descent on the Detian Waterfalls was worth the trip alone, but having the chance to immerse myself into the Chinese version of an industry I’m very familiar with within North America—extreme sports and film—was incredible. Add to that the food exploration and our cultural experience in China will be hard to beat.

Looking back, I had no idea that a few months after coming home from China, a virus originating in another province 1500 kilometers north would shut-down the world, restricting travel and forcing me to explore paddling within the boundaries of my own backyard. And yet, that ending makes this trip to China all the more memorable.