Eat Your Heart Out: Reflections on Dutch Oven Cooking and Lineage

River folk are divided into two factions. Those who love to cook on the river, and those who pack leftover pizza slices into daily rationed Ziplocs for sustenance. I descended from the former breed.

Meal planning is one of my favorite parts of river trips. Though this task invokes a sense of dread for some—to such drastic degrees that they will trade cooking responsibilities for groover management—not me. While groover management doesn’t intimidate me in the least, meticulously plotting the most flavorful, healthy and efficiently prepared river provisions (using minimal ingredients) is my forte. 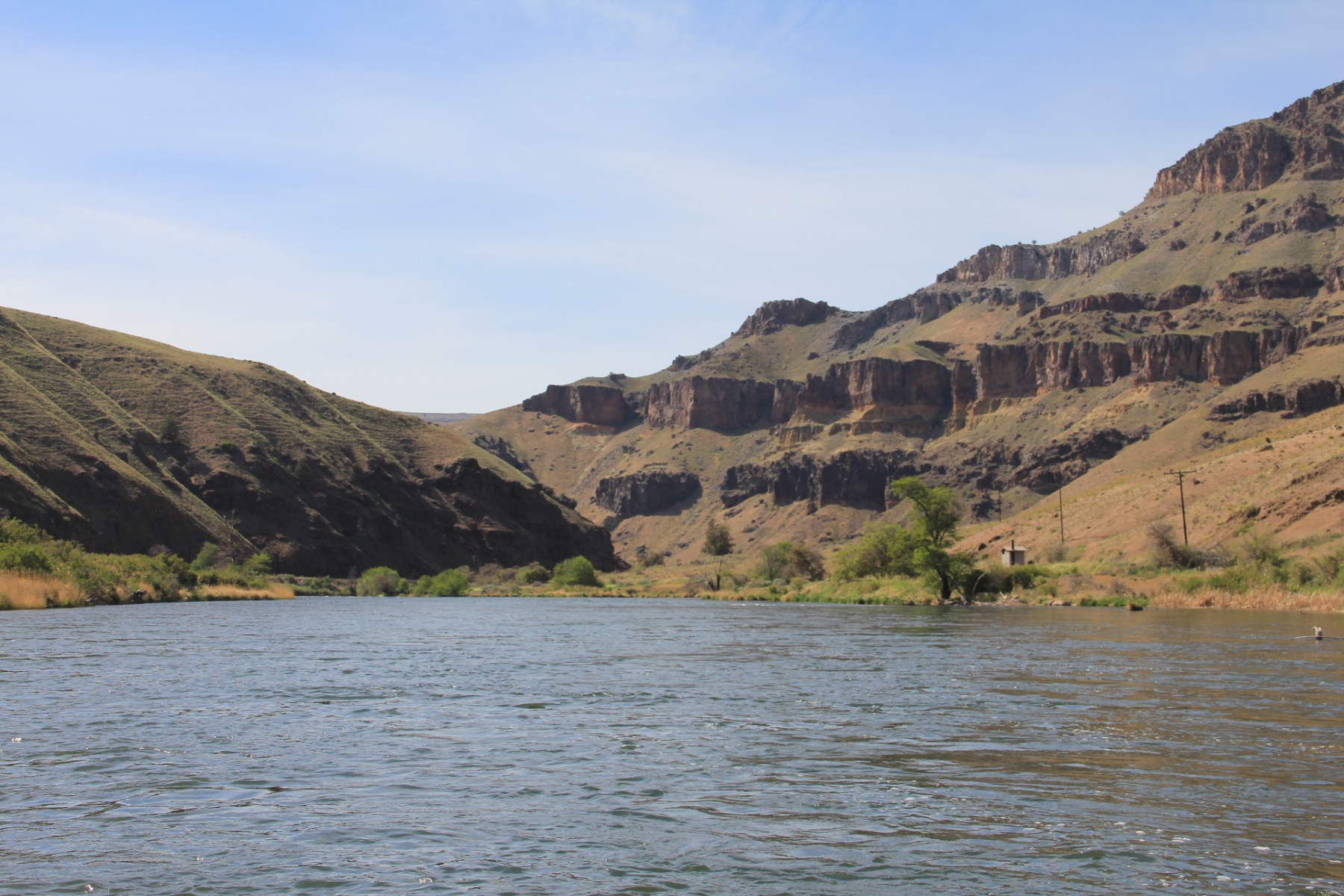 On my first spring river trip of 2021, my love for procuring river grub culminated into one of the most splendid menus to-date. The key to it all? The Oregon Territory chuck wagon first mate: The Dutch oven. I’m talking the original, real deal, full cast iron, rusts-at-the-drop-of-a-hat, heavy as sin, 10-inch OG Lodge model.

I’m not sure how I became so infatuated with cooking on a Dutch oven. Although I have no memories of learning the art of meal prep on an open fire, my rustic kitchen queen of a great-grandmother, Pauline Pearl Powell was a pro at this.

She was born in the 1910s, a daughter of Valsets, Oregon (a now extinct logging town in the coastal range). When the Great Depression hit, she and her logger husband moved to Owyhee country to manage a mining camp. They lived in canvas tents, and as the lone female amongst the crew, Pauline worked as the camp cook. Sometimes I romanticize feeling Great-G-ma Pauline in my bones while squatted next to my cast iron cauldron. I imagine shouting “Soups on!” and grasping a hand-whittled wooden spoon to shovel stew into the bowls of an endless line of starving, soot-covered men. 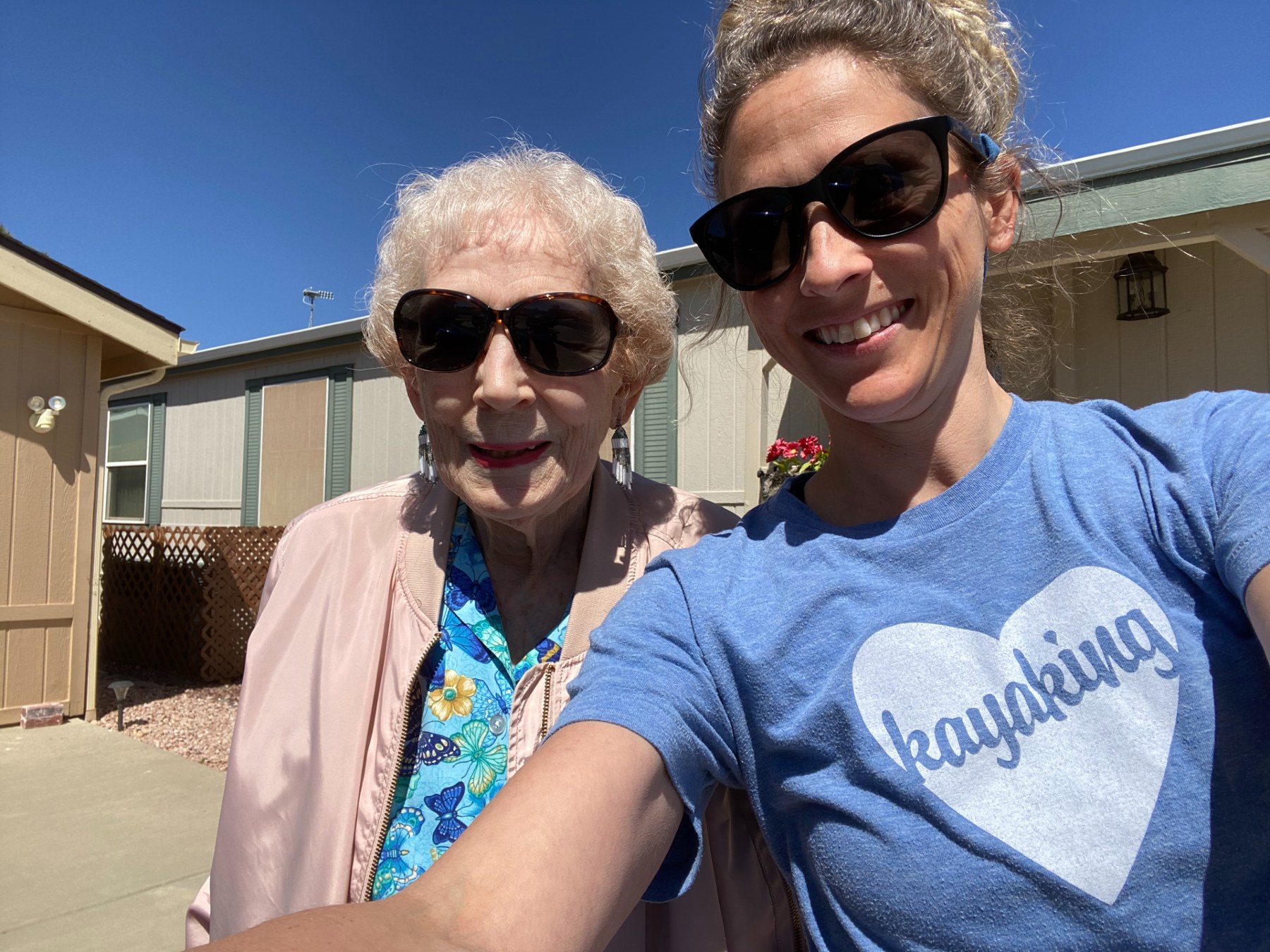 In contrast to the riverside mining camps of yore, to deliver the fanciest food, cooking for two or three maximum is ideal. Therefore, I invited my roommate and trialed my favorite recipes on him. This trip was also the maiden voyage of my new frame, dry boxes and thus, my newly packed and organized kitchen set-up—all based on a Dutch oven cooking model. Luckily, spring timing worked out for the legal allowance of a fire, which is clutch when cooking with a Dutch, obviously.

Sitting on the commissary dry box, (wo)manning the oars, floating down the Lower Deschutes, thoughts of preparing dinner distracted me from my rowing duties. Passing through Trout Creek and Whitehorse Rapids, punching through laterals and catching slack water behind iceberg rocks, visions of curry, desert for brekkie and veggies sizzling in oil danced through my head.

The wildflowers bursting along the riverbanks on either side became the only distraction from my culinary daydreams. 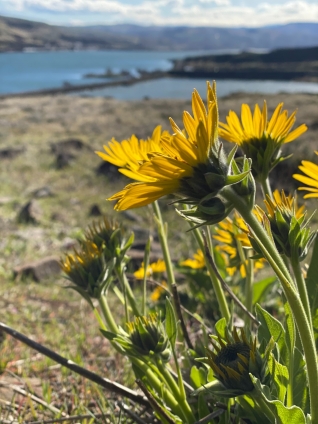 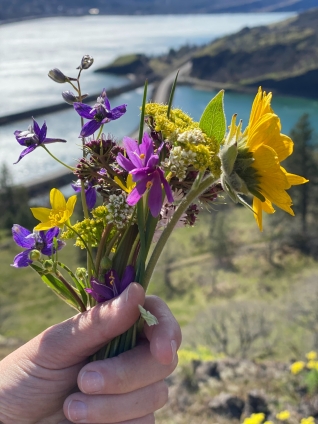 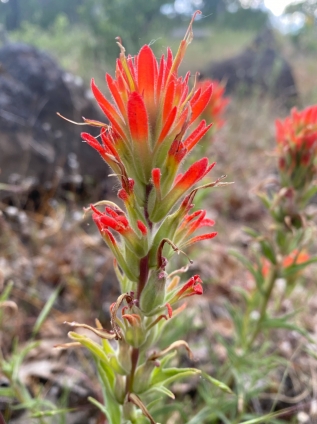 Mid to late April can be a sweet spot for the Lower Deschutes to showcase peak blooms. Desert paintbrush, mules ear, mustard, wild rose, yarrow and an unidentified large bell-shaped lily blooming on a ground vine. In addition to amassing a bouquet to dry and place on the dash of my Ford Escape (my other vessel when I’m not rowing), I gathered tons of fatty mullen leaves to burn—fuel for prayers for my Great-G-ma Pauline. Some say smoke from the mullen leaves, the cooking fire, tobacco or incense are all thoughtful means of expression to the spirit world.

When we eventually docked for night one, I was at the ready to showcase my cookery skills with Indian Cuisine. I selected a Chickpea Curry with rice. In the morning, I opted for a classic sweet treat, Mixed Berries and Yellow Cake (which goes great with coffee), and for the second night, I put together a chicken and veggie fry over sweet potatoes. (Recipes are included below.) 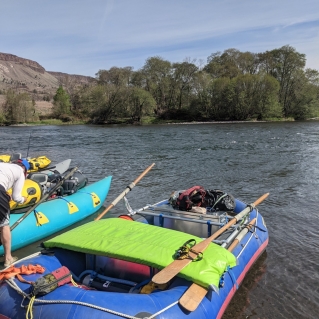 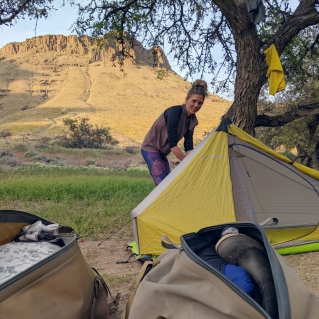 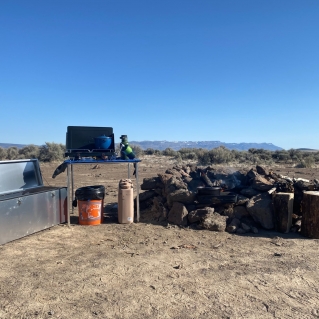 Even though I put way more thought into river meals than anyone else I know, it’s nice to eat well after a long day of paddling. There’s nothing more disappointing than eating a group meal some poor planner put little to no effort into.

I remember the last staff trip I went on down the Rogue River a few years back, one guy brought premade bagged salad for his potluck item. On top of that, he refused to even put it into a serving bowl, insisting we could shake it up with dressing in the bag and then dole it out from its original packaging. While it wasn’t that big of a deal to me, no one on staff ever let him live it down.

Why not go the extra mile with your meals? Why not make your grandma proud and prepare something nourishing and beautiful—an offering equally as striking as the landscape you’re traveling through? Icing on the river trip cake! 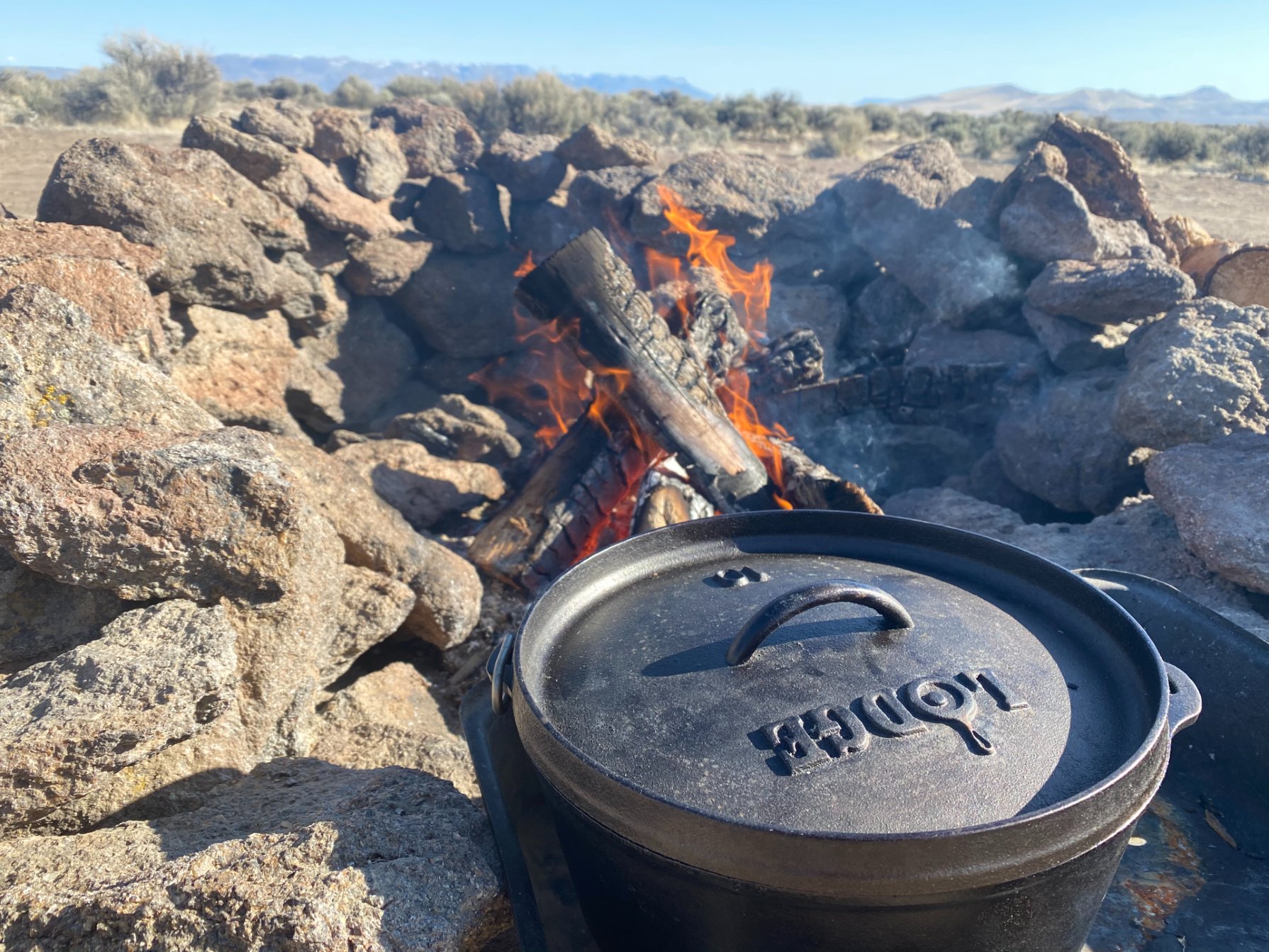 These meals are dedicated in gratitude to Pauline. She didn’t raft, but she was a badass and paved the way for me to be my fullest river-chef-self.

Chickpea Curry
Note: Curry and soup make great one-pot wonders Bonus points if you cook it in advance, freeze it at home, then reheat it on the river.

To save time, cook the rice at home and store in Tupperware. At camp, preheat the Dutch oven over palm-sized coals or smaller. Fry spices in oil, stirring constantly until just fragrant. Add garlic and onion, cook 1-2 minutes to soften the onion, continuing to stir to prevent the garlic from burning, then add ginger and sweet potato. Stir in tomato paste, then add chickpeas followed by coconut milk. Simmer for 20-30 minutes until chickpeas are tender. Add lime and coconut flour (to thicken if desired). I sometimes add kale, or a seasonal green once removed from the flame. Serve immediately over the rice. Let stand for a couple of minutes to heat the rice through. 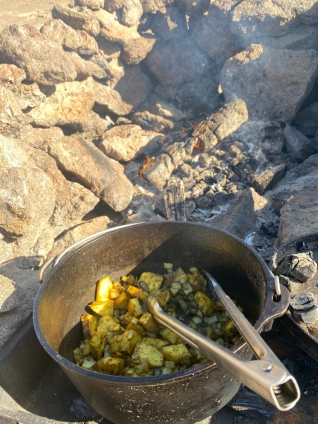 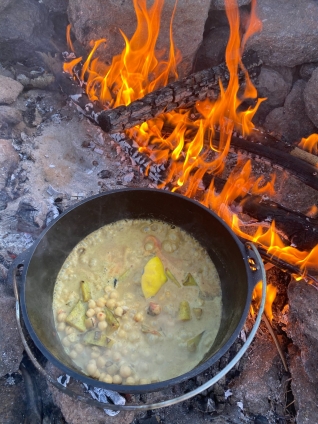 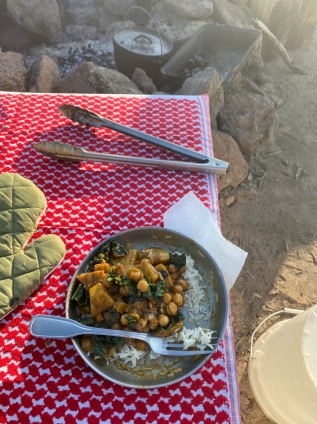 Mixed Berries and Yellow Cake
Note: Although I chose to serve this as a sweet breakfast with coffee, it also makes a delightful dessert.

Pour berries into a bowl to thaw berries. Meanwhile, prepare cake mix according to directions on the box and set it aside. Preheat the Dutch oven over palm-sized coals or smaller. Generously butter the bottom of the Dutch oven and make an even layer of mixed berries. Top berries with cake mix. Put the lid on the Dutch and place more coals on top of the lid than underneath. Add and remove coals often being mindful not to burn the bottom. You can tell when it’s ready by the smell. 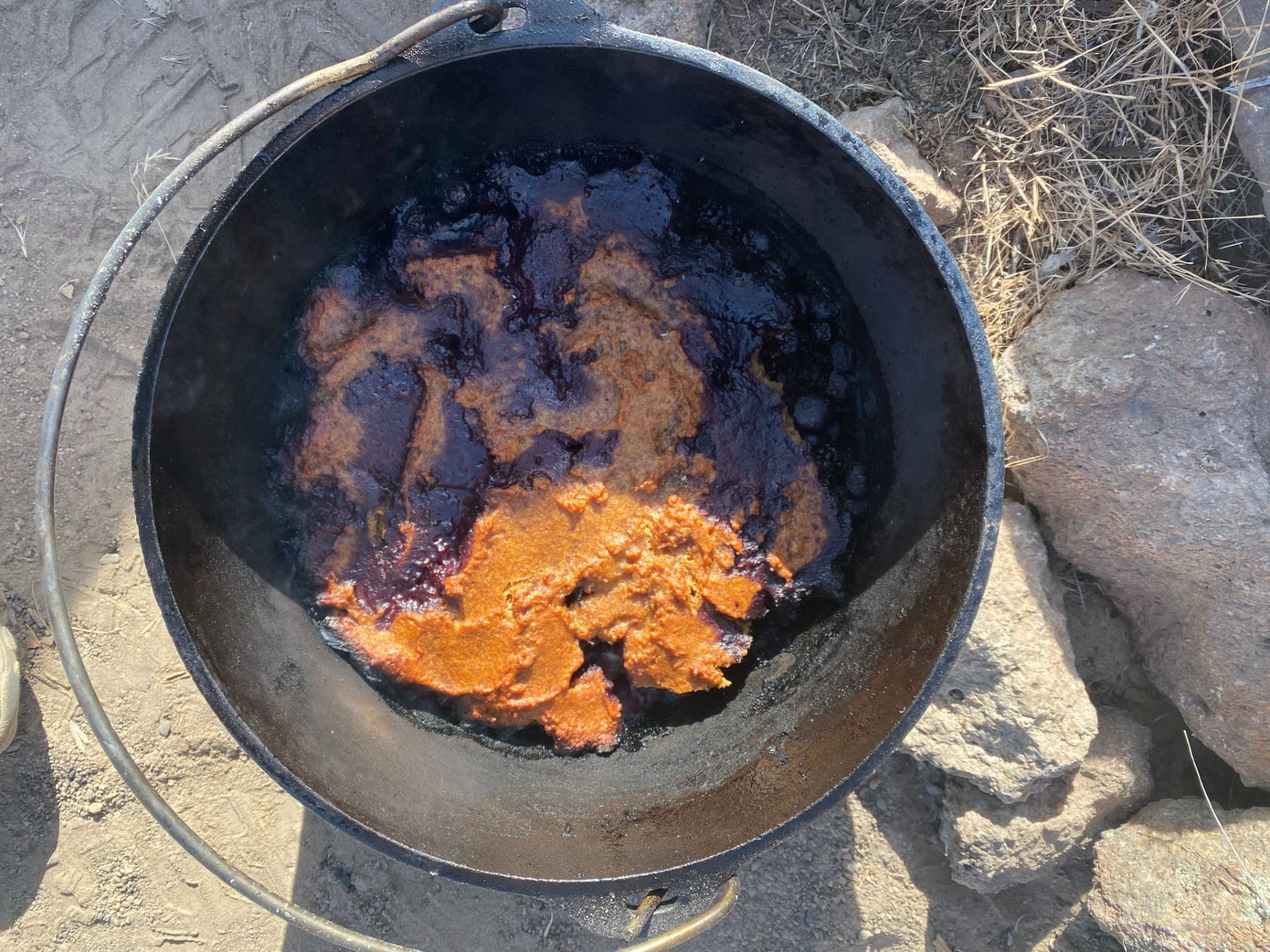 At home, dice and marinate the chicken and veggies. Pack in separate Ziplocs or Tupperware in the marinade for a more intense flavor. While you’re packing, roast the sweet potatoes in tin foil until tender. Pierce with a fork to determine readiness. Let cool, then pack in the cooler.

At camp, drizzle oil into the preheated Dutch oven. Brown the chicken for several minutes before adding veggies. Add the zucchini and mushrooms, stirring frequently and gently scraping the blackened bits from the bottom. As the chicken and veggies cook, use the Dutch oven lid to reheat sweet potatoes. Set the lid handle-side-down on coals, place the foiled sweet potatoes directly on the lid.

Once the chicken is cooked through, veggies are tender, and sweet potatoes are warm, mash the sweet potatoes and spread on plates. Sprinkle the veggies and chicken over the mashed taters, drizzle with any caramelized liquid from the tin foil or fat left in the Dutch oven. 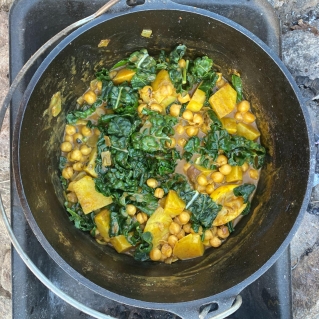 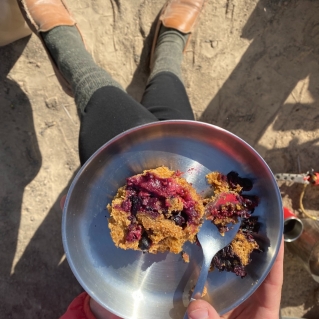 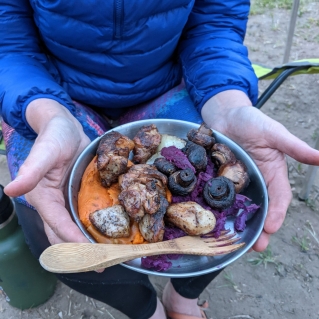