Returning to Canoe Expeditions on the Spey River

The Spey is one of the few rivers in the UK where you can go on a multi-day canoe trip through mountains all the way to where it joins the sea. It can be an entirely uninterrupted week of paddling. 2020 was a lot of things, but it was significant for boaters and canoeists because we couldn’t paddle as a group, and certainly couldn’t embark on multi-day trips. Getting back into expeditions was immensely satisfying because we got to work together as a team again. 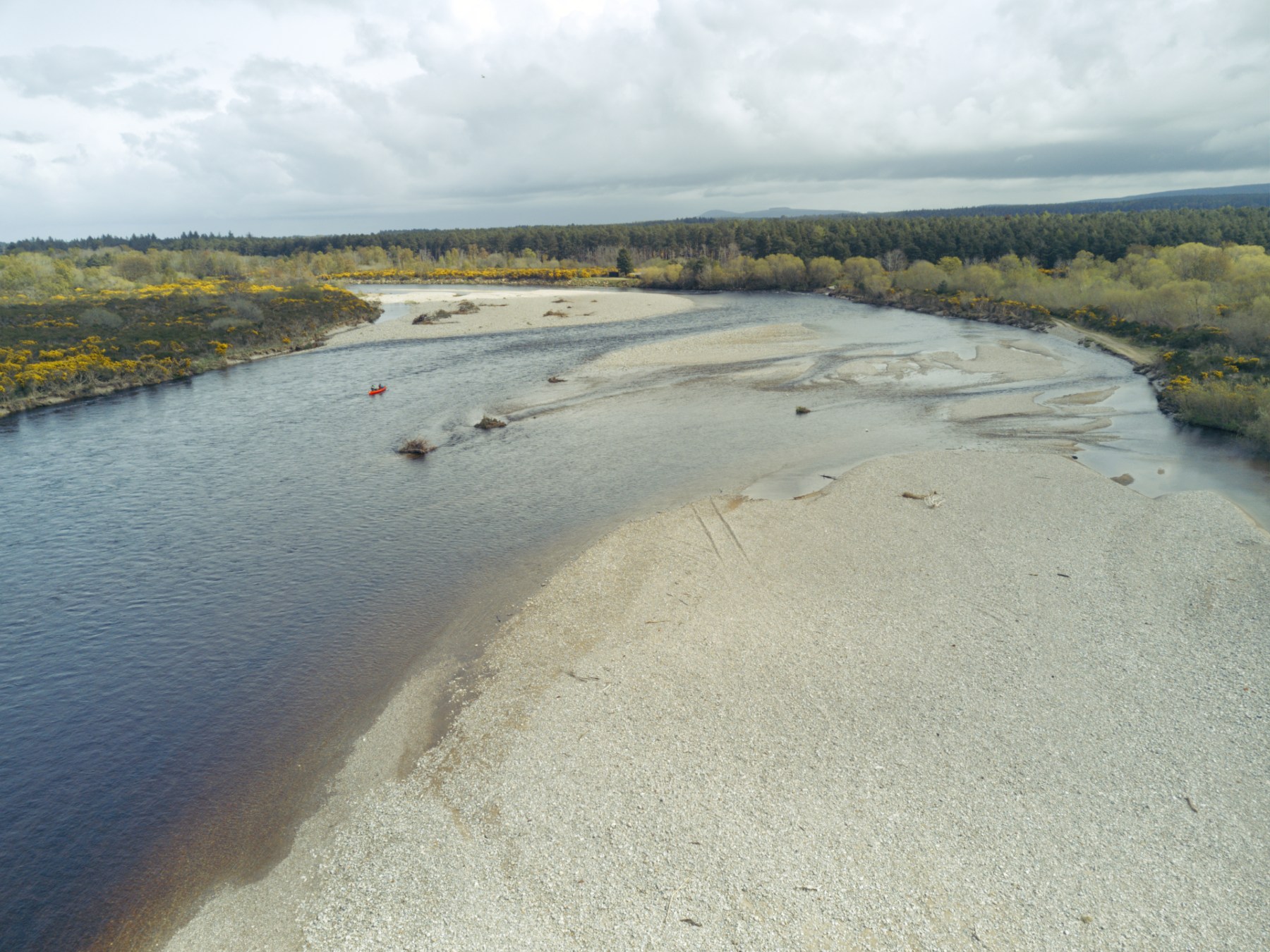 The Spey is the perfect Scottish Canoe expedition. We started the trip at Knockando, below the Aberlour Distillery. Almost every Scottish paddler knows what it smells like to paddle in the presence of a distillery—a smell akin to baking, depending on what part of the distilling process is taking place. Squirming with anticipation after a long 18 months on land, we lowered the canoes down into the gorge on throw lines. The canoes sat satisfyingly low in the water under our gear and food, straining at the lines. Getting that first stroke in and cruising away from the bank in convoy felt like leaving the last year behind.

The trip started out sunny, with a strong tailwind that sailed us out of the gorge. We were so ready to get moving, our spirits soared high with the feeling the water under the heavy open boats. We broke into the rhythms of an expedition with chatter and excitement. As we left the dark green of the gorge, more and more of the river community appeared on the banks. Fishermen cast from almost every eddy, pulling in Atlantic salmon, sea trout, pike and minnows. The bank glittered with freshwater pearl mussels. 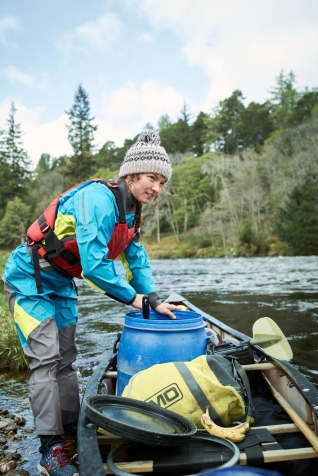 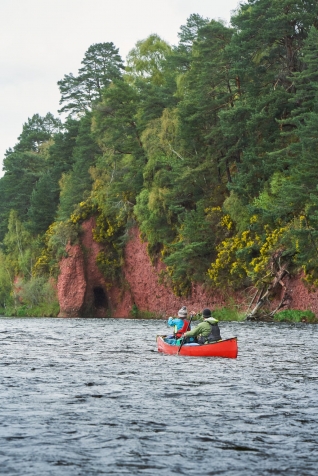 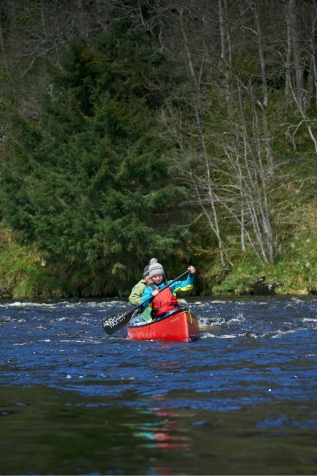 Paddling farther downstream toward Craigellachie, the headwind began to pick up. This part of the river becomes more technical, requiring a balance between respecting other river users—maintaining a safe distance from anglers—and committing to safe lines through the increasingly difficult rapids. Paddling in tandem meant that any line adjustment we made had to be in harmony with one another. You don’t want to miss an eddy when the rest of the team is a hundred meters upstream, and you can see a strainer washed up where the old line used to be.

Despite their weight, the canoes cut through the flow easily, drawing each other ahead in our wakes. The landscape changed to flat green plains, stretching out so far ahead it felt like we were already at the sea. Towering red cliffs replaced the plains, overflowing with foliage. Over the years, huge swathes of clay bank had slipped into the water to create sand bars that swarmed with swallows. We cruised past four more distilleries, the Carron trio and right up against the Balvenie distillery, the only mainland distillery that has four people working in constant shifts to constantly turn the germinating grain. The access was so incredibly easy, we could have tied the canoes to a tree and walked right through the front doors for a tour and a dram of liquid gold. 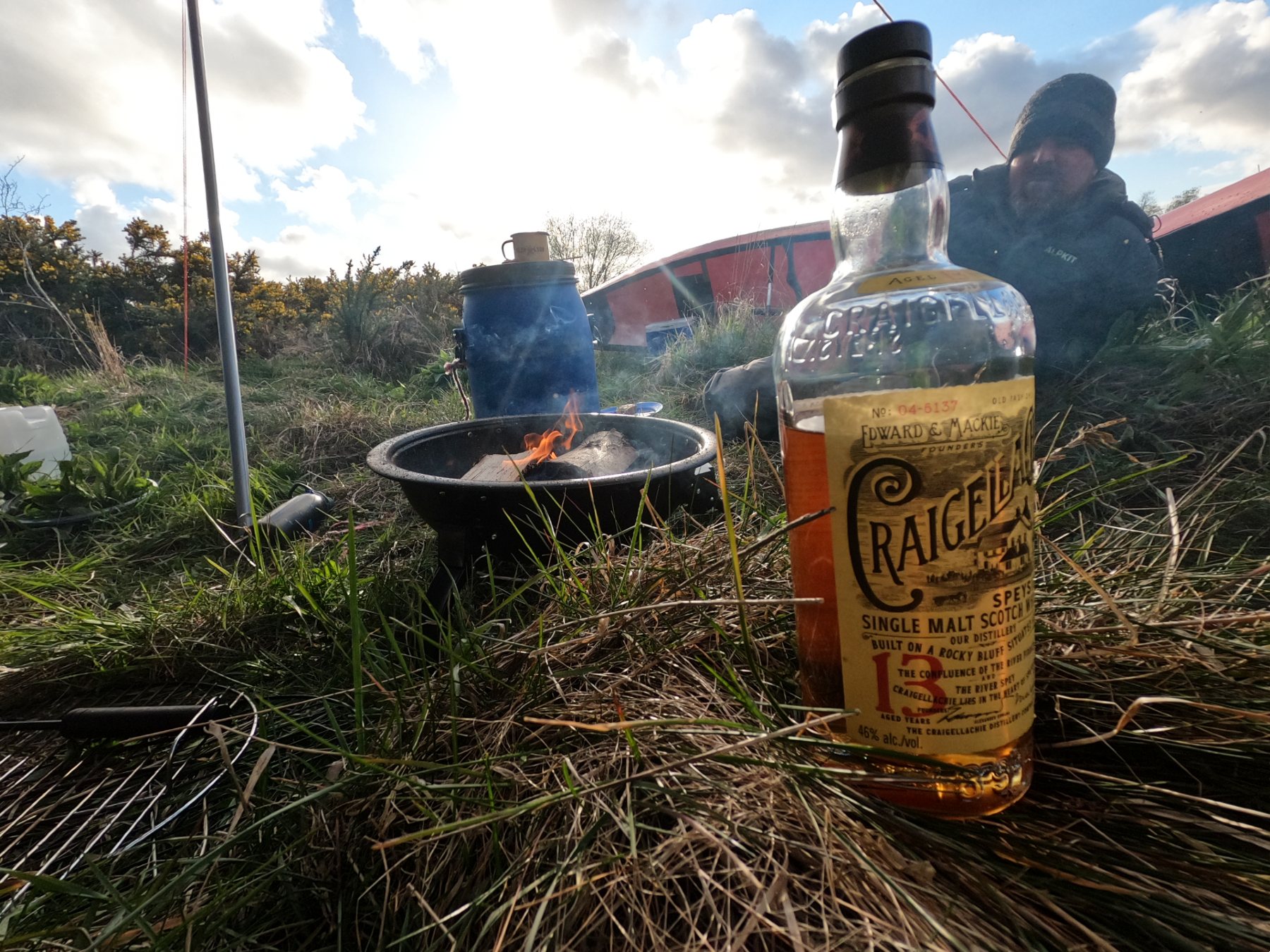 As evening fell, we made camp, sheltered by gorse bushes, the weather was almost Mediterranean. We set up the canopy between our tents and dragged the canoes to make a wind shelter for the firepit. While the burgers charred, we decided to see if having more than nine distilleries on the same river produced anything worth drinking. Sharing a bottle of 13-year-old Craigellachie whisky from the distillery that sits above the confluence of the river Fiddick and the Spey, we agreed that we’d never had a sweeter whisky after a hard day of paddling against a headwind. It felt like a breath out, after a long time of holding in.

I unzipped my tent the next morning to snow on the ground and some colossal clouds building on the horizon. Super keen to get back out on the water and see the villages that cluster around the lower parts of the Spey, we got a breakfast fire going quickly, boiled coffee and packed the canoes. 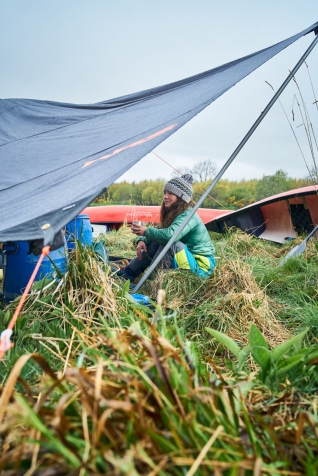 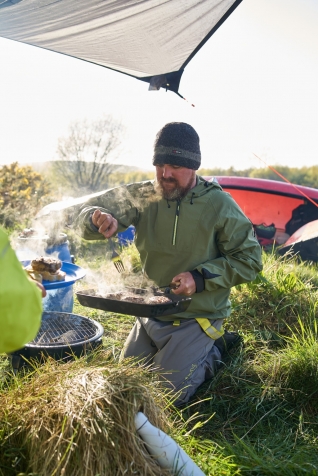 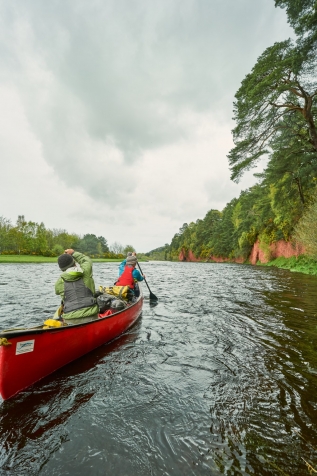 We cruised through the middle of Rothes Village and Fochabers, where the river began to pick up into beautiful green wave trains. With lighter, more agile canoes, we didn’t need to spend the same amount of time picking lines and setting angles. We sailed under Craigellachie bridge, a medieval-style structure with turrets at either end. This bridge represents the entry into one of the most expensive Atlantic salmon fishing spots in the United Kingdom.

As we got nearer to the end of the expedition, we had an overwhelming urge to get out of the canoes and explore an ancient mansion, that looked untouched other than having no glass in the windows and no front door in the frame. We wondered why someone would leave such a cool house. 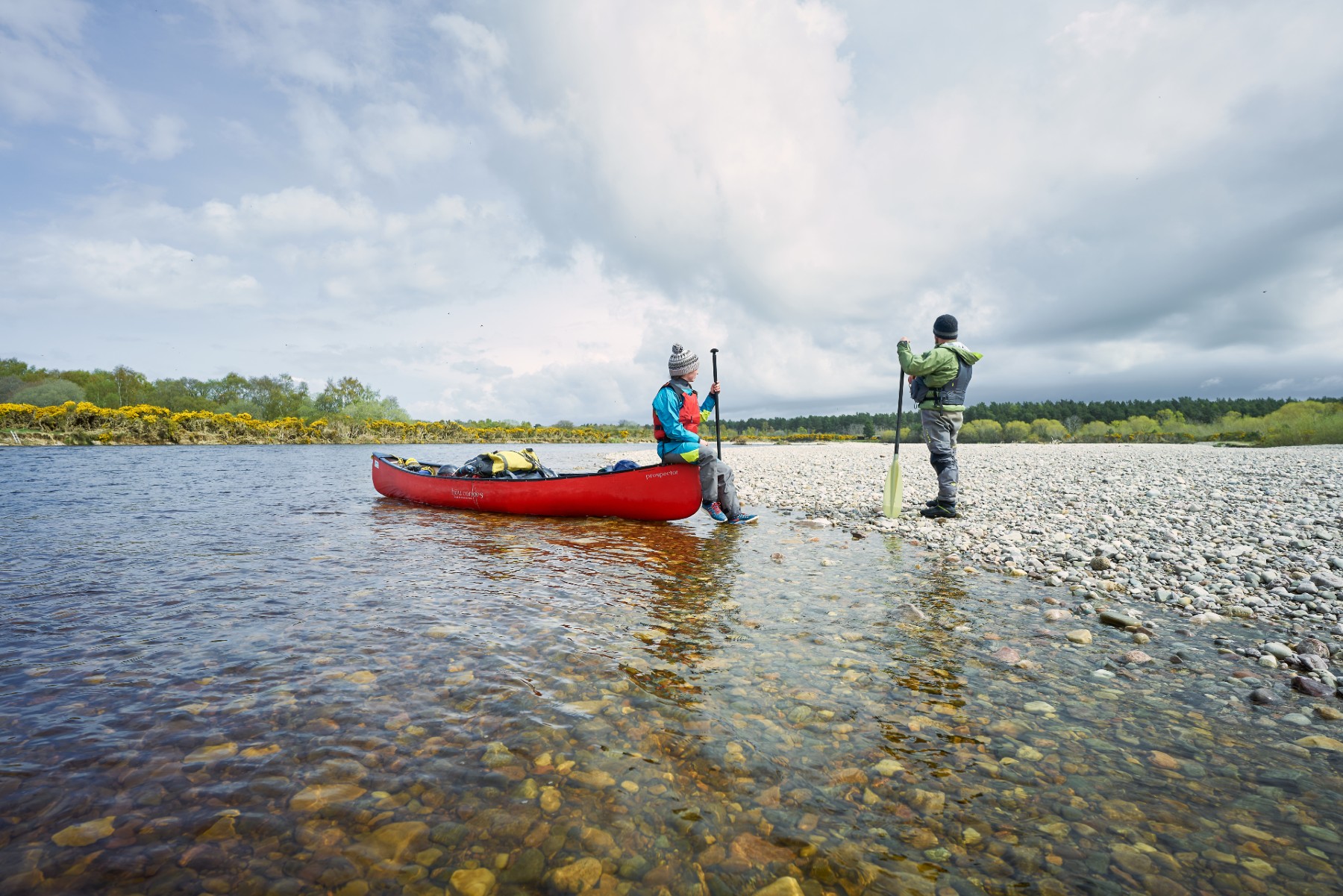 The Spey has a catchment area of over 3,000 square kilometres, which means that when it floods, it floods BAD. Stories of horrifyingly high flows that turn the once-charming whirlpools in the gorge into canoe-eating monsters are common in Highland Scotland—so we presumed that during these kinds of floods, houses anywhere near the riverbank become totally uninhabitable.

In the end, the Spey expedition felt like a glorious blend of nature—otters, eagles and giant fish—with modern features. We passed through whole towns built around ancient distilleries, and the Strathspey steam railway escorted us downriver, clattering reassuringly next to us on the river bank a couple of times a day. Reaching the sea and feeling the satisfaction of completing the expedition, felt extra special because it was the first in such a long time. 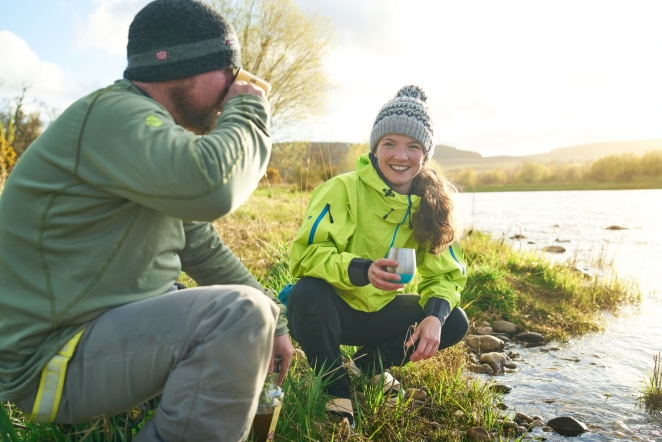 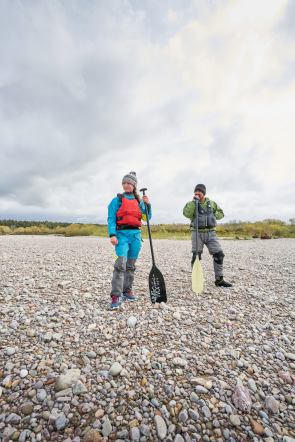 As we clutched a steaming mug of hot chocolate from the Whale Tour Café, we felt like we’d finally pushed past a barrier. We had survived 18 months of self-isolation but had returned to paddling as a team and sharing a journey on one of the most beautiful rivers in Scotland.

Editor’s Note: Guest contributor Amber Maslen is a full-time athlete, specializing in slalom but with a particular interest in leaving certain things better than she found them. This includes improving the space for women in the outdoor community and enabling people to understand how to best look after the natural environments that we love.