Trip Report: The Grand Canyon and Sh*t Creek in 10 Days

Part I: Interpreting the Omens—For Better or Worse

And while there had always been too many moving parts to really believe that I could pull off both trips, things somehow worked out. 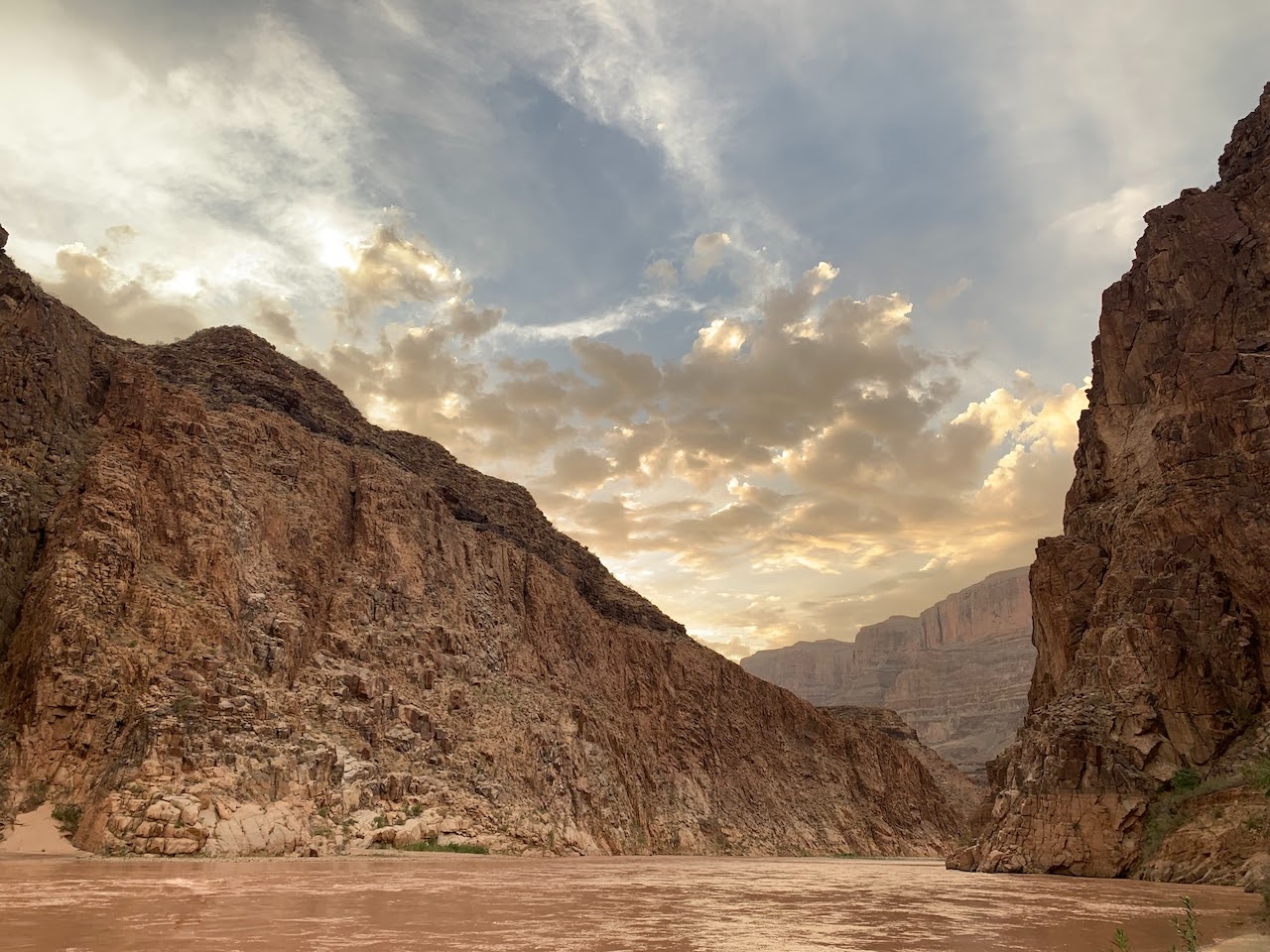 On the way south, I rendezvoused with a friend in Salt Lake City, who had painstakingly but successfully put together our menu for an 18-day Grand Canyon trip between Lees Ferry and Pearce Ferry.

Despite a broken blinker and no trailer lights, we didn’t get stopped once, and we made it to Lee’s Ferry in plenty of time to rig the boat and meet the random strangers that made up our crew.

The trip had been advertised as an eight-person take-care-of-your-own-damn-self and do-your-own-damn-thing kind of trip. Ironically, the trip attracted a group of guys who bonded like brothers.

We differed in all the things that you might expect. We had different ages, different jobs, different families, but we slipped into the kind of easy fraternity that turned us back into boys beside a river. 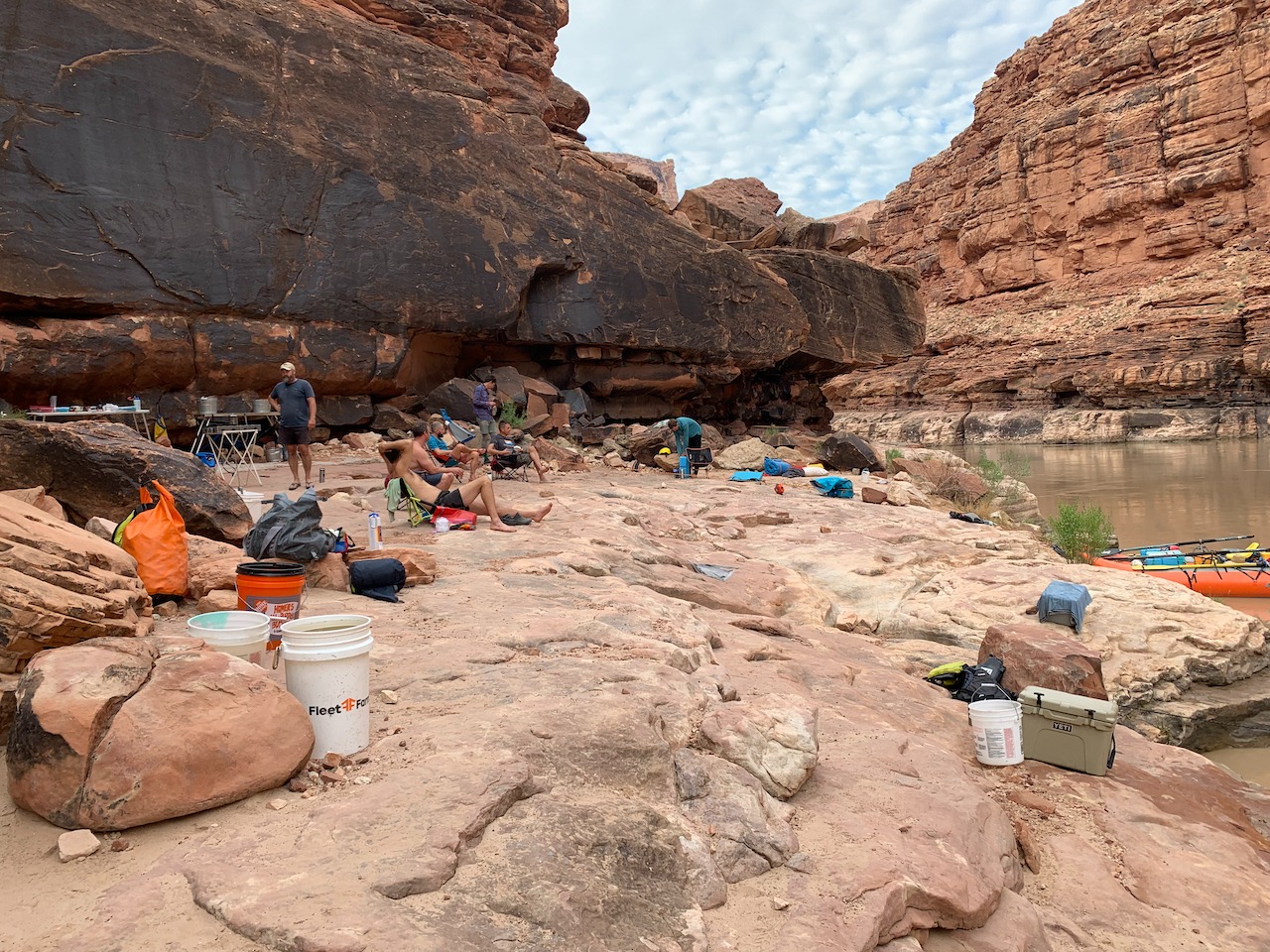 Oh my God, we laughed. We laughed so hard it hurt. Which is what also makes this story hurt so much more.

Again, there were signs. On the freeway out of Salt Lake City, we narrowly missed a bad accident. And early in the trip, during a monsoon rainstorm, a basketball-ball-sized rock dropped off a thousand-foot canyon wall and hit the water 25 feet from our raft. It’s hard to put into words how fast that rock was moving and how very dead we would’ve been had it hit us. It’s also hard to comprehend how long that rock had perched atop that cliff.

Following that bit of bad timing, and while contemplating a particularly tall Century plant, we watched it topple over right in front of us. A plant death like sixty years in the making. Then, at our Nankoweap camp, a bat—probably rabid—landed in the middle of the beach in broad daylight and stayed there cooking in the sun. I don’t even know what that omen means, but it can’t be good. And finally, we saw a California Condor, which was cool, unless you remember that they are still vultures—just waiting for the dead. 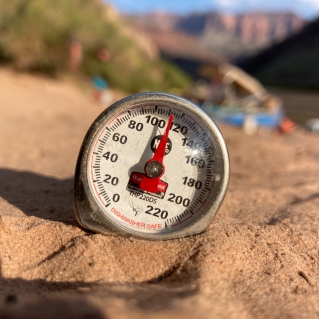 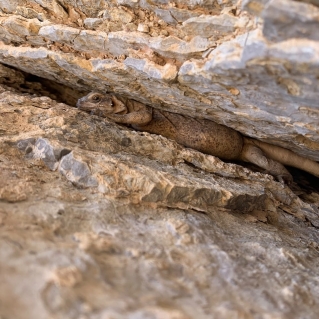 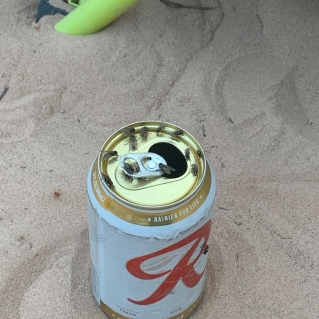 All the signs pointed to erosion, decay, and death so I shouldn’t have been surprised when the ticking-time-bomb of my bad back went off as I lifted the kitchen box on day two. I tried to tough it out but days three, four, five, six, seven it just got worse. Rowing was painful and it was hard to miss must-miss features in the big rapids. My passenger was concerned to say the least.

I worked around the pain as best as I could. I did a fair bit of self-medicating and standing in the river to let the cold water ease the fire in my back. And laughing, of course, which they say is the best medicine, but nothing fixed the problem. By day nine, when I stepped off my boat, my back said “F-You. Your trip is over.” 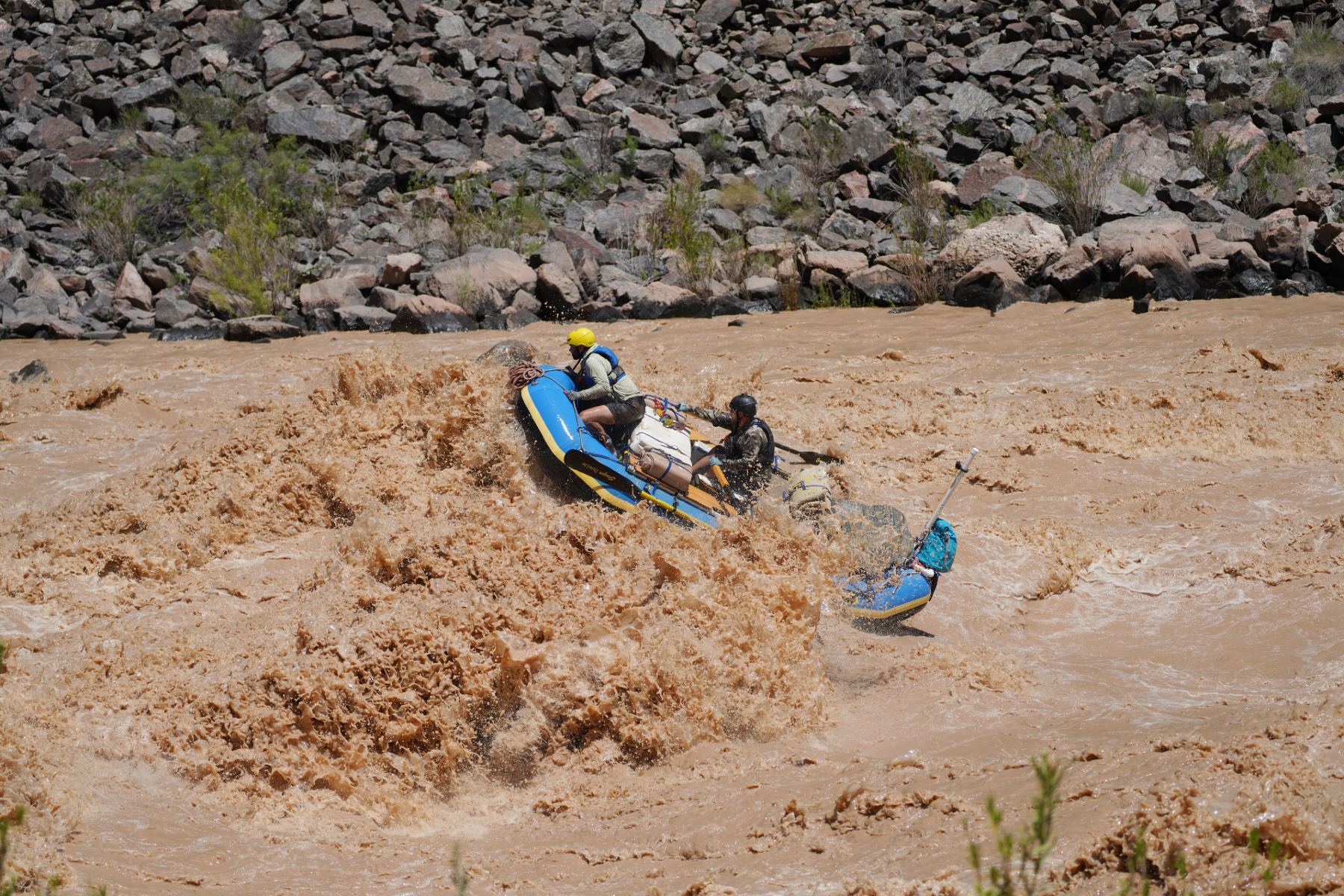 At Bass Camp at mile 109, I collapsed in the hot sand. My back spasmed and I wanted to throw-up or die. I’ll spare you the details. If you have ever herniated a disc, you know, and if you haven’t, suffice to say it hurts—a lot.

Right after I collapsed, a couple of guys got a sleeping pad beneath me and sent someone to hike down to a commercial group in the camp below to call for help on a Satellite Phone. Another private group rolled into our camp, while I was flat on my back and one of the guys was an EMT who had a little hydrocodone. I lifted my head high enough to swallow the pill with a little water and it took the pain down enough for me to think. After a short dialogue, it was decided that my raft needed to keep going down the canyon, but without me. I was flying out. My friend packed my bag and promised to get my raft back to Sturgis. 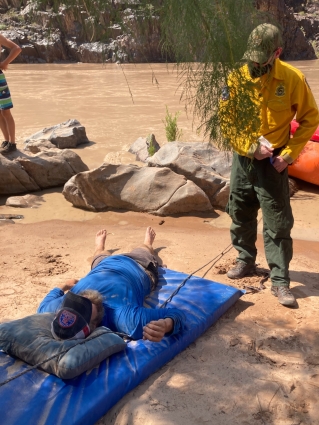 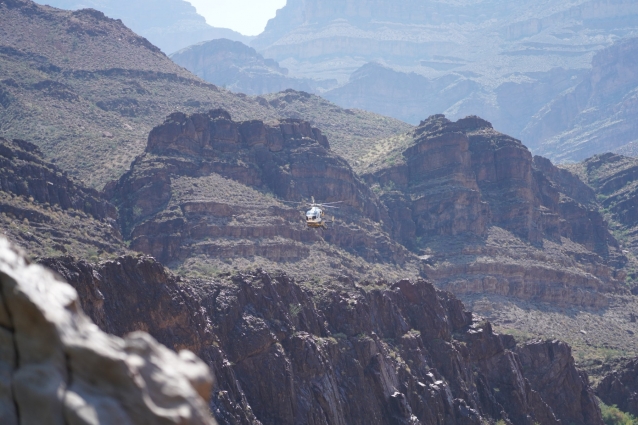 What happened next was something of a dress rehearsal for going to heaven. If you substitute a NPS helicopter and a crew of EMT for angels, and two doses of Fentanyl for the feeling of leaving your earthly cares behind, then I was most certainly going to heaven. As the helicopter lifted, I watched the river recede and the panorama of the whole canyon grow.

Unfortunately, the ride was short, and didn’t end in heaven. Nobody on the South Rim offered me a halo, harp or eternal bliss. Instead, I got an hour and half ambulance ride, and a mostly forgotten corner of the Flagstaff emergency room, which nobody would confuse with heaven. 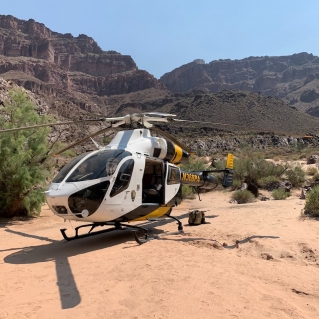 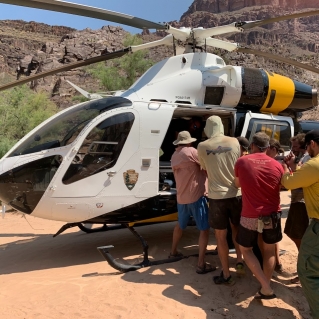 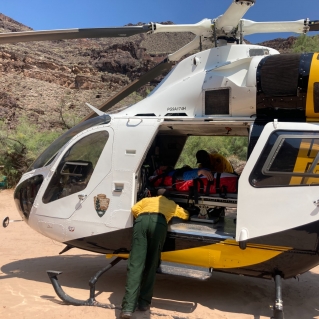 Sand from the bottom of the Grand Canyon still covered my body. I made small beaches everywhere—under my hospital bed, in the bathroom, and probably in the MRI machine.

At some point in the afternoon, the doctor came in and read me the MRI results. I had herniated the disc between my L4 and L5 vertebrae. This was one vertebra down from my other disc herniation. A bummer, but certainly not a death sentence.

With the help of a nurse named Jessica, a physical therapist named, Angela, a walker and some heavy-duty narcotics I was up and on my feet by 7:30 that evening. 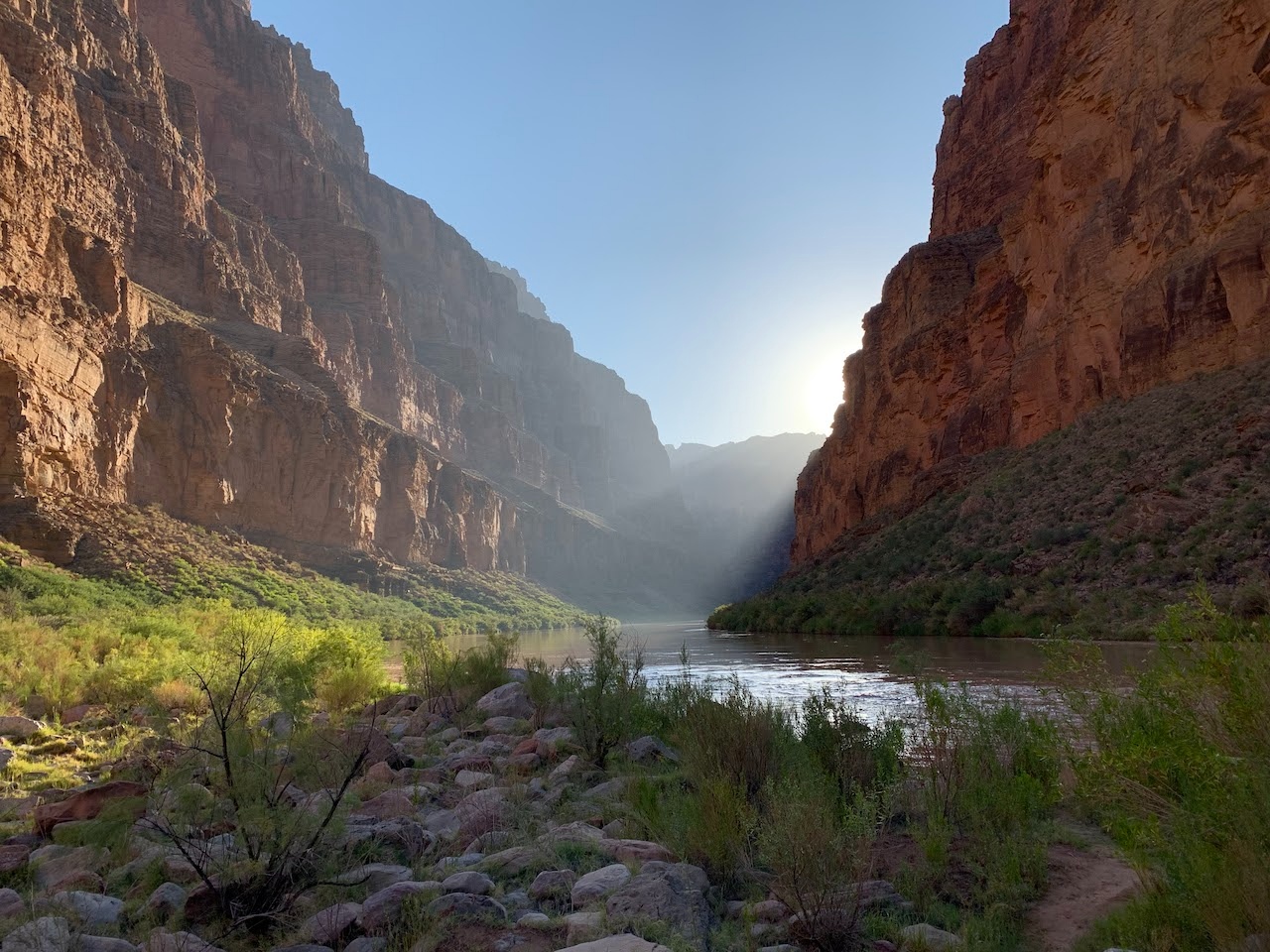 Part II: Up Shit Creek without a Phone

The put-in for Shit Creek was right outside the emergency room of the Flagstaff hospital. Like any put-in, it was busy. Ambulances came and went. Cops brought in handcuffed prisoners. Sad and scared people smoked nervously.

This is the part of the tale in which I tell you that I do not and never have had a cell phone, which is the modern-day metaphorical “paddle” that you could find yourself without. My choice to not have a phone is philosophical, not financial. I won’t get into all of it, but I will discuss the part of that philosophy that pertains to this story.

Going all the way back to my hitch-hiking days in Alaska, I’ve always received a weird enjoyment from interacting with and relying on complete strangers. This is a big part of the reason that I frequently raft with strangers. And while I understand that not having a cell phone is irresponsible and that a phone could save me all sorts of trouble, if I’m gonna be honest, I kind of like trouble.

Besides, I was still covered in Grand Canyon sand and that shit is magic. 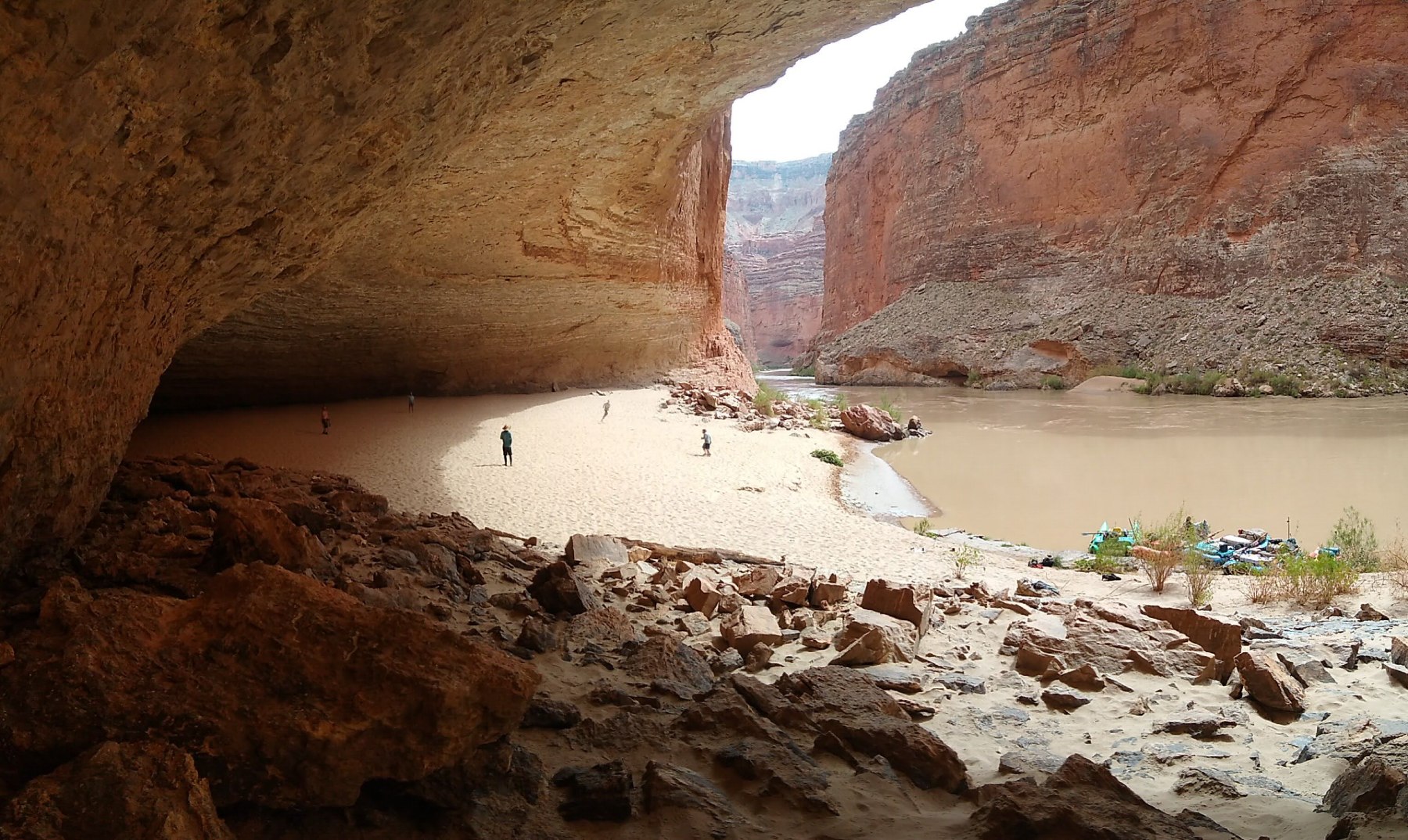 So let me set the scene: There I was, a somewhat high on Oxycontin, dirty, bearded, forty-something guy with a dry duffel and a PFD strapped to a walker standing outside the Flagstaff emergency room looking for a ride to a hotel. I mean, who wouldn’t pick me up?  Spoiler alert—nobody would pick such a person up.  I was grateful the hospital had given me a walker because Shit Creek can get pretty bony and walking was a real possibility.

But I ended up meeting Michael who was waiting outside the hospital to hear about his dad who was in the hospital for congestive heart failure. I explained my predicament: I needed to get a hotel room for the night and then catch a ride to the airport the next day. Michael suggested a hotel and called me an Uber. I guess I always thought that Uber was like a taxi and you paid after the ride, but I guess not. Uber charged Michael’s phone. 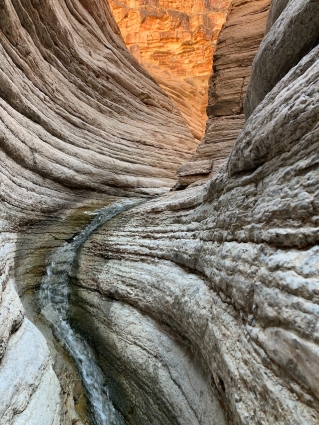 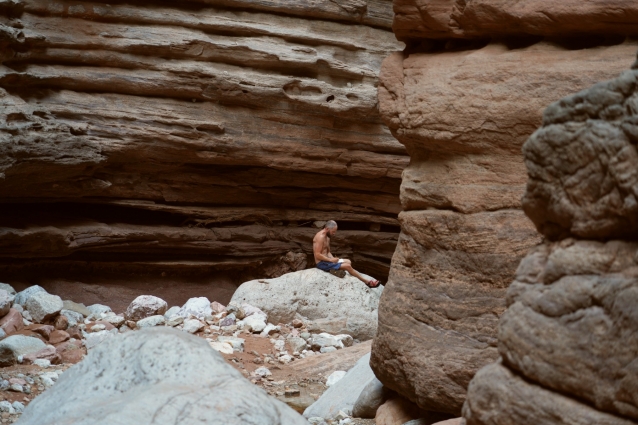 “You got a ten-spot?”  Michael asked.

“I don’t have any money,” I said, suddenly realizing the depth of my predicament. I had a debit card, but without an ATM nearby I couldn’t pay Michael for the ride.

He looked at me and should’ve said, “F you,” but instead he said, “Will you pray for my dad?”

I’m not really religious, but I told Michael that I would and later that night, in lonely hotel room, I did.

An Uber driver named Dale showed up at the hospital. On the ride, Dale listened to my story and then told me his own tale of woe, he had spent most of his life in Florida but had lost everything in the 2008 stock market crash and was now driving Uber in Flagstaff. He drove me to the hotel that Michael suggested, where he should’ve kicked me out of the car, but he took one look at the multiple-story hotel building and said, “I know a better one, with fewer stairs,” and then he turned his meter off and drove me to another hotel.

The other motel was really only better in the sense that it didn’t have any stairs. But I was grateful. 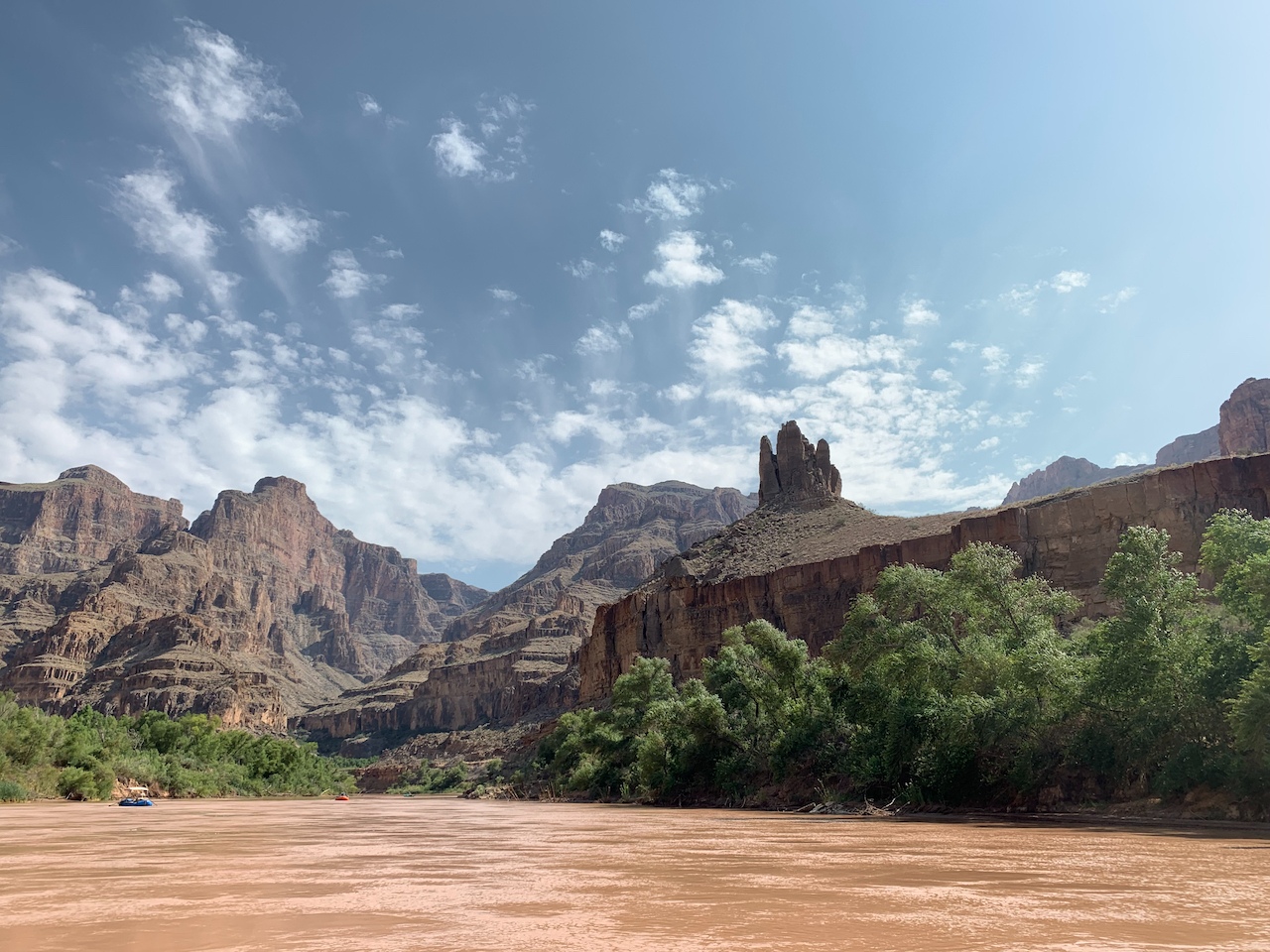 Since this is a trip report, I should say something about the camps up Shit Creek. They are typically dirty motel rooms with mysterious stains where the T.V. does not work. If you’re unlucky, camp is the littered edges of parking lots—or I guess camp might be anywhere that you can stretch out your body and lay your head.

In the morning, I called a cab from the hotel lobby and caught a ride to the airport. The earliest flight back to Rapid City was at 1:30. But I still had one more problem. I had to figure out how to let my wife know that I would be flying home. That’s where an awesome front desk person named Katherine comes into the story. She let me use her phone to call my wife.

From there I headed to my second camp on Shit Creek: the airport bar.

My opioids had worn off, so I ordered a shot and beer at 8:30 a.m. The morning bartender appreciated the company and talked about his business idea of steam cleaning garbage cans in Flagstaff. After lunch, I listened to the second shift bartender talk about her desire to leave Flagstaff and go to Cosmetology school, complicated by her need to protect her younger sister from her crazy mom. When my flight was finally called, I left a couple of big tips for both bartenders and a $20 credit at the airport bar for Katherine who had let me use her phone.

On the flight back home, I listened to a woman talk about her husband who had died flying his small plane in the canyons of Utah. Shit Creek has a lot of such stories.

For me, the takeout of Shit Creek was the Rapid City Regional Airport were my wife waited with some commiseration and some admonishment.

I thought of all the stories and small kindnesses that floated me back from Flagstaff to Sturgis. And said, “No.”

If you really want to get the most out of Shit Creek you have to descend it without a paddle…or a phone.