Smoke and Silver Linings on the Main Salmon 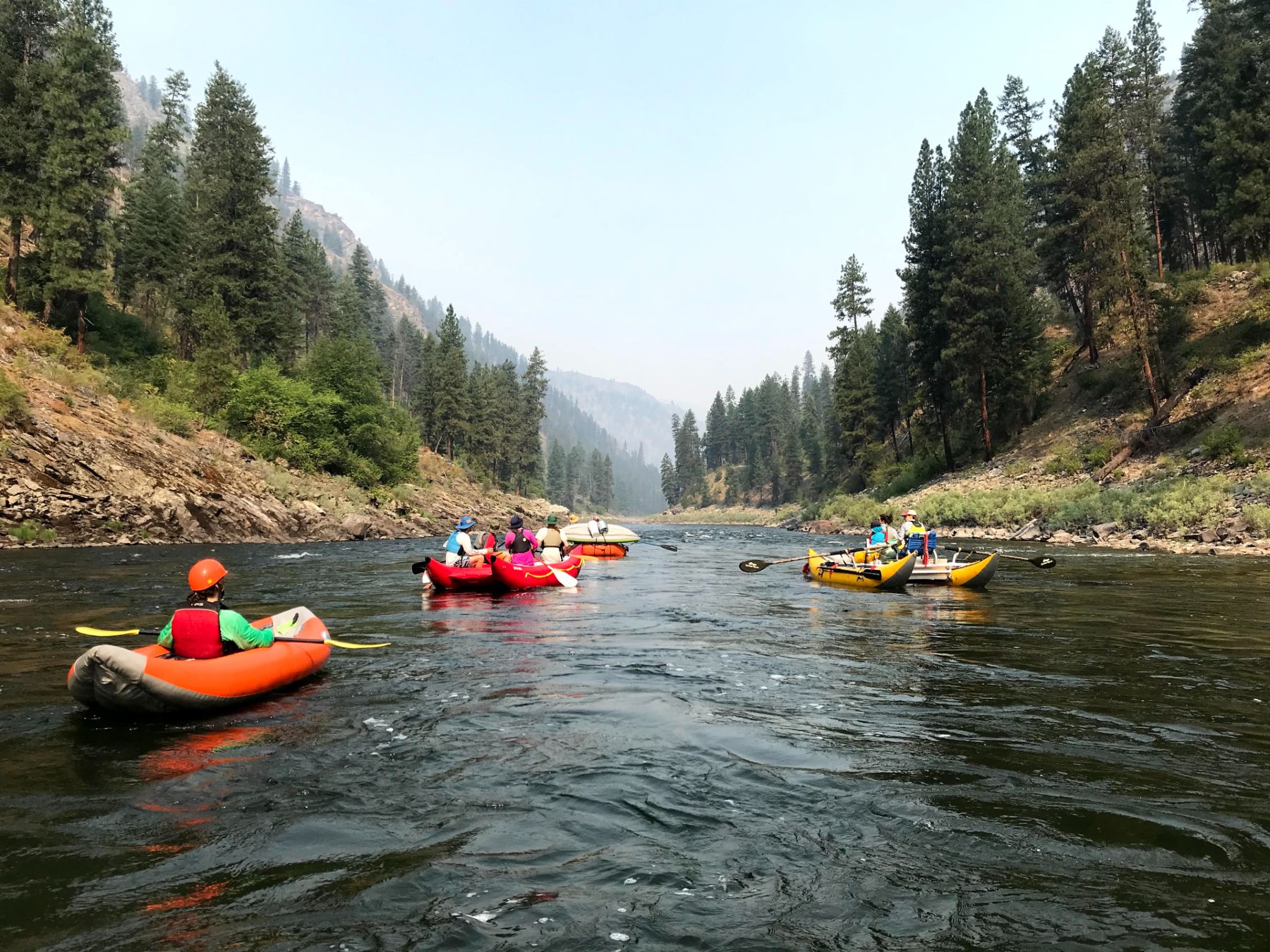 In the halcyon days of spring planning, we started with eight boats and 20 people, then shit started happening.

“I don’t know—too many teenagers. Doesn’t sound like fun,” said a childless friend.
Okay, seven boats.
“I just got this raft. I guess I don’t feel comfortable yet rowing other people down the river. Sorry, I’m out.”
Six boats.
Then sometime in early July, the smoke from numerous wildfires rolled across the West.
“Asthma, sorry we’re out.”
Okay, five boats.
Then the actual banks of the Salmon River started to burn.
“I don’t want to die, sorry, I’m out.”

In the end, guess who didn’t back out?  People without boats. That left us with four boats, although I’m using the term “boat” generously. Our party included seven adults and seven teenagers and our flotilla consisted of two rafts, a partially rigged cataraft, and a paddle cat. 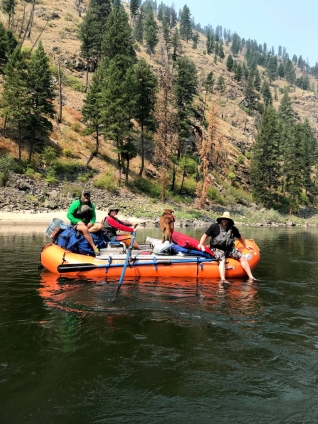 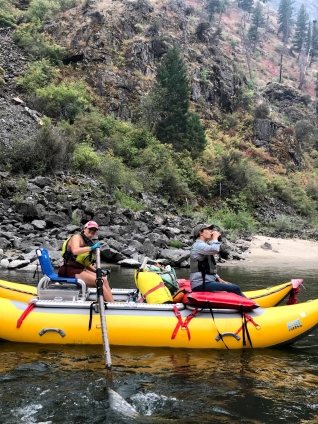 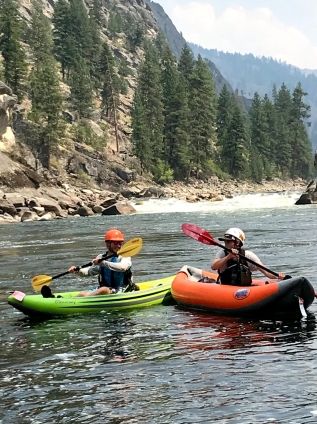 If I’m honest, I wanted to back out, too. As the smoke and the fire got worse, a number of other private trips cancelled—a fire sale, so to speak, on Main Salmon Permits. But I was the trip leader, and the trip was for friends who had never taken a multi-day river trip, I felt compelled to see the trip through. So, we added one of our slightly leaky duckies and a borrowed ducky to the fleet; with these additions we could, potentially, float everyone down the river; their gear was another question.

At Corn Creek launch site, I stuffed gear anywhere it could go on my raft. But the dry bags seemed to be having dry bag babies on the ramp.

One of the non-boating families were hikers. But back when we had more than enough boats they had been told (probably by me) that rafting was not backpacking, and they could bring whatever the hell they wanted. And, as is so often the case for people freed from restrictions, they splurged. They brought a 35L clear dry bag full of snacks. Not food for breakfast, lunch or dinner, mind you, but snacks. It looked like a very good night of trick or treat. 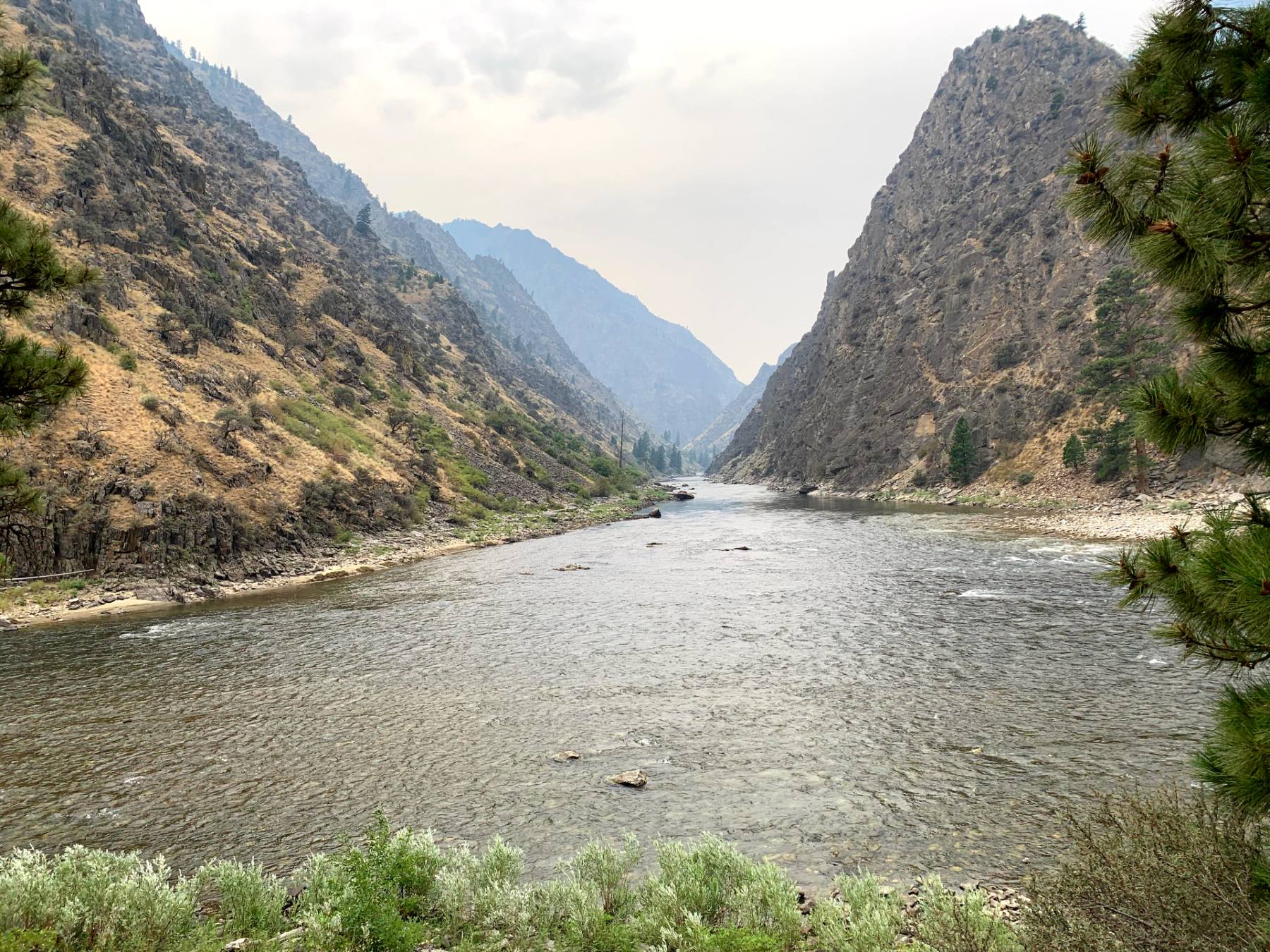 But there were silver linings in the smoke clouds that hung between the canyon walls. The forecast had been for the upper nineties, but the smoke kept the temperatures down. Since only a couple of other groups had decided to willingly float into a forest fire, the ramp was wide open allowing us to leisurely pack our gear. And the lack of other groups had also allowed us to get most of our first-choice camps.

The river was minus one foot on the ramp, which would be a forgiving flow for the teenagers occupying the paddle cat and the duckies.

After the ranger went through our gear and warned us about the increased jet-boat traffic due to the fire and the need to get supplies to the firefighters, we launched.

Our first camp was a short, 8-mile float to Alder camp. This made subsequent days longer, but it allowed everyone to get used to the river and the craft that they were piloting before we hit any of the major rapids. It also allowed us to unpack all the things we had just packed for the chance—since we are looking at silver linings—to do a better rig job in the morning. To further yin-and-yang-ify things, the low river brought out amazing beaches but made gear-hauling a lengthy trek across burning sands. 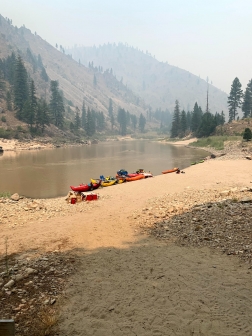 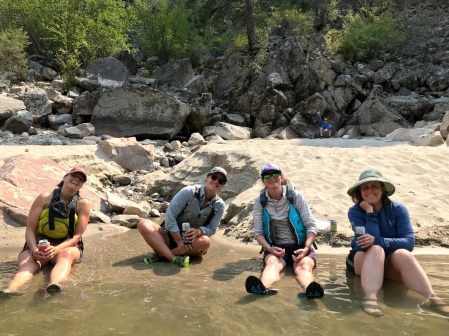 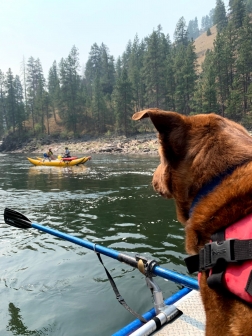 The next day brought a handful of class III rapids. My seventeen-year-old daughter captained the paddle cat—amazingly. Her first crew was a group of inexperienced teenagers. Expecting disaster at the bottom of every rapid, I would turn to see the Slice taking the perfect line through the rapid at the perfect angle. On and off throughout the day, Carlie’s younger brother and sister joined the crew and the three of them, siblings who can’t manage to wash the dishes without fighting, actually worked together. Let’s call this conflict resolution by fear of death.

This is not to say that everything went perfectly. I told both of the teenage boys in the duckies to keep their helmets on and their gear strapped in. They mostly listened. But at Black Creek, one of the steepest drops on the river, one of the boys flipped their ducky, delivering a helmet and throwbag to the river Gods—who, I might add, have no need for safety equipment. 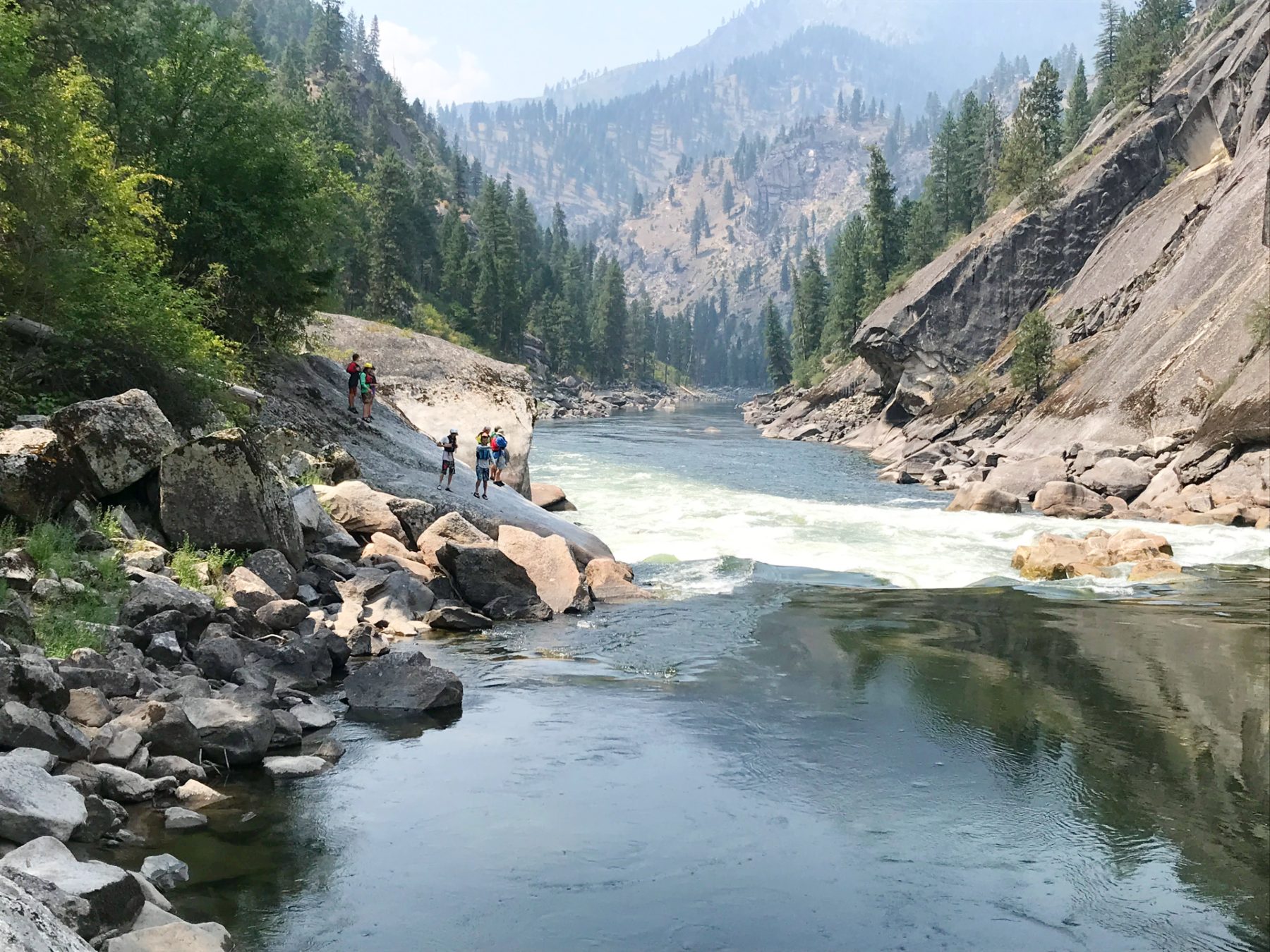 The farther down the river we got the thicker the smoke…er…I mean fog became. Despite the burning eyes and scratchy throats, we worked to convince ourselves that the smoke was a lovely fog or mist. Periodically, this delusion would be interrupted by the pumps placed in the river and the firefighters zooming by on jet boats.

We had been instructed by the ranger to stop at Yellow Pine Bar to check for updates regarding the fire and camps that might be closed. I had imagined a team of firefighters and a full-on briefing; instead, we got a cardboard box on the bank that listed the closed camps in sharpie. Reed, our night three camp, was the only one that appeared to be closed.

Then, we met the fire. The banks were black and smoldering. A few shrubs and downed trees still burned. It looked like we were rafting through the smoking ruins of the burned world. 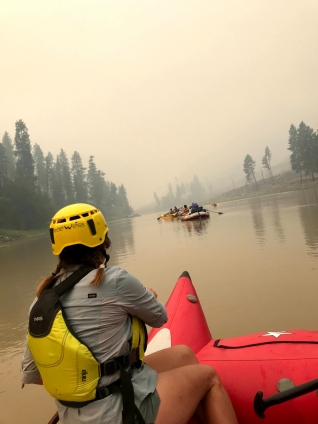 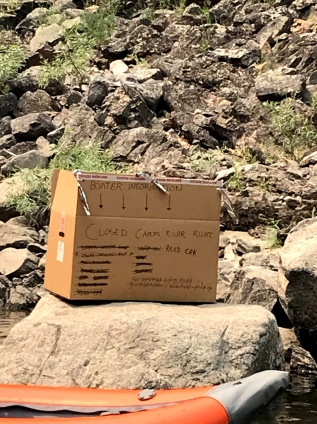 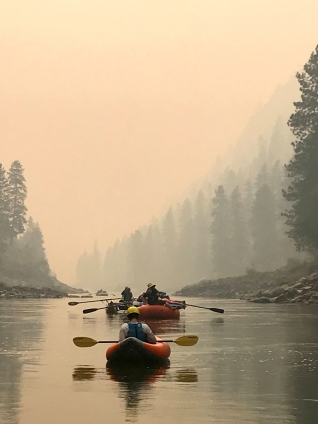 I should probably explain that the Reed camp is my favorite camp on the Main Salmon. It arrives like an unexpected reward on what is usually the toughest day of rapids. You round a blind right-hand corner and there it is, sand and rocks swooping down to meet you in the eddy. Above, big ponderosa trees provide shade on a flat terraced area perfect for tents. Reed Creek trickles through the camp watering a beautiful riparian area. Mostly buried in the sand is the mysterious wreckage of a metal boat.

But it wasn’t. It was really the only camp on river right that wasn’t burned.

We may or may not have stayed there, despite the cardboard box and my wife’s insistence. But wherever we camped, fire appeared on the ridge above camp. And an ominous orange glow filled the sky. In another example of the good with the bad, nobody slept much.

The next day we woke from our ruinous sleep to a muddy brown, opaque river. Later, we would find out that a creek had blown out on the Middle Fork and the sentiment-loaded water had finally caught up with us. 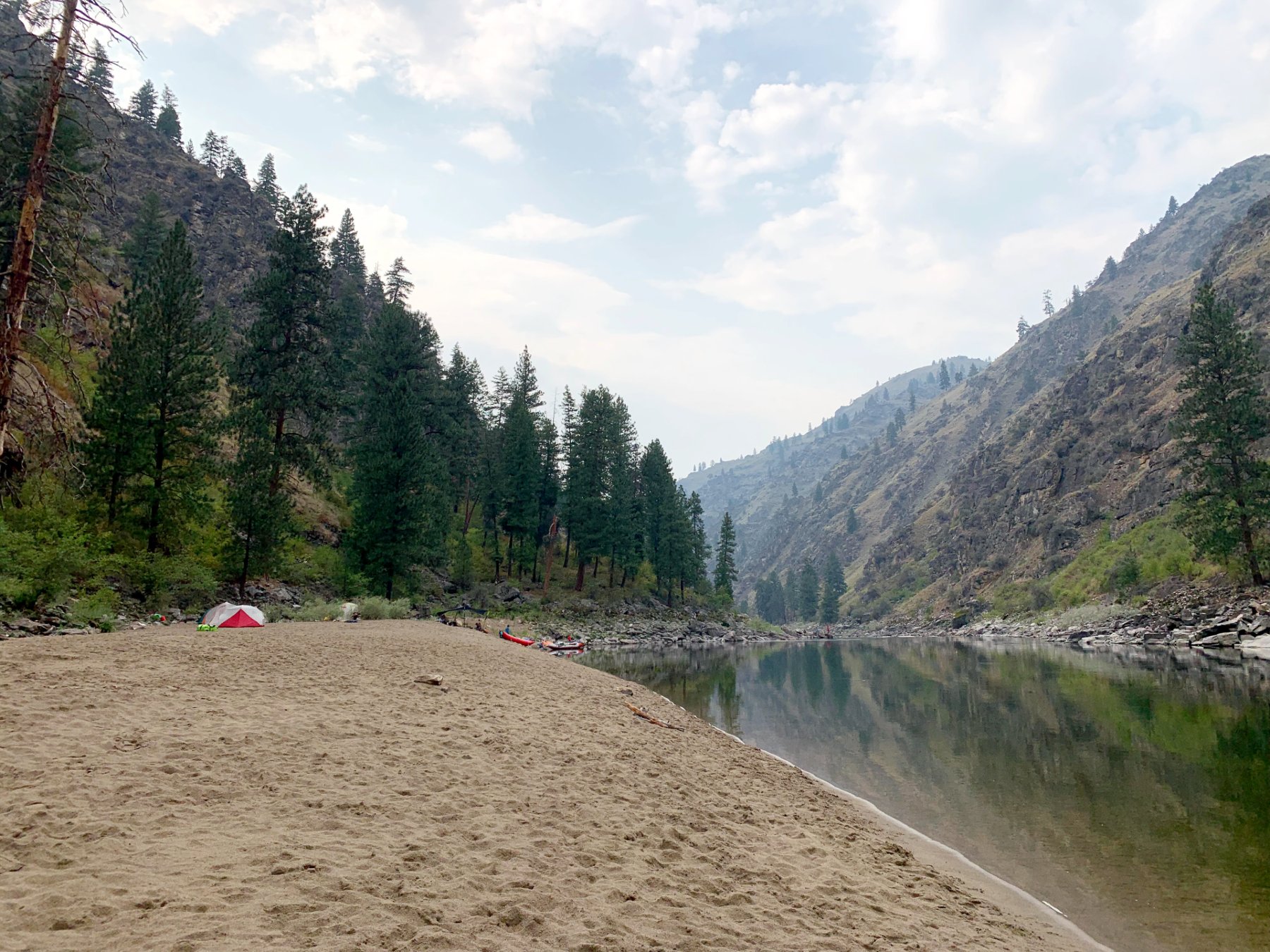 Once on the water, the regularly scheduled afternoon upstream winds started early, which sucked. What didn’t suck was that those winds pushed the smoke back to the point at which we were rowing—I mean really rowing—under bluebird skies. And breathing, albeit heavily, clean air for the first time since we began the trip.

And so it went for the remainder of the trip—the good with the bad. 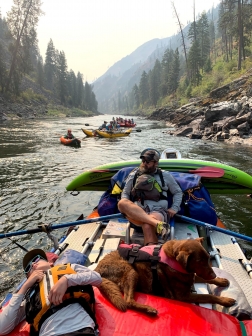 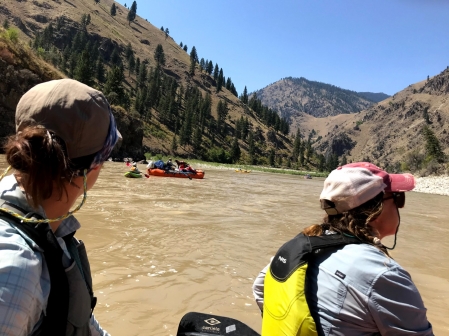 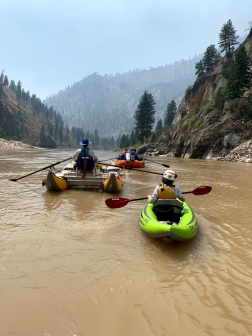 The river remained turbid, but the swimming hole at Swimming Hole Camp was crystal clear.

The smoke returned, but the winds shifted downstream.

On night four, one of the teenagers got sick and we floated out a day early, but, on the bright side, we didn’t run out of beer.

And at the lower flows, Vinegar Rapid was harder, but Chittam was easier.

And for a grand finale, the ramp was hot, but our vehicles were there.

But all rafting trips are this way. The good with the bad, the up with the down, the light with the dark. And the perfect with the imperfect.