A Funeral Flotilla on the Middle Fork

One thing I felt fairly certain of as my stepdad, oldest son, and I drove across Idaho was that we were likely the only people winding down the highway with a jar full of human remains on their car’s dashboard.

It was just a small jar—one of those Bonne Maman ones with the striped caps. The ashes inside of it didn’t take up much space, about four to five tablespoons worth. And my dad had taken special pains to ensure that the lid stayed on by crisscrossing it with several strips of Scotch tape because we were taking the jar and its contents on a six-day guided trip down the Middle Fork of the Salmon with Canyons River Company, owned by my longtime friend, Greg McFadden. 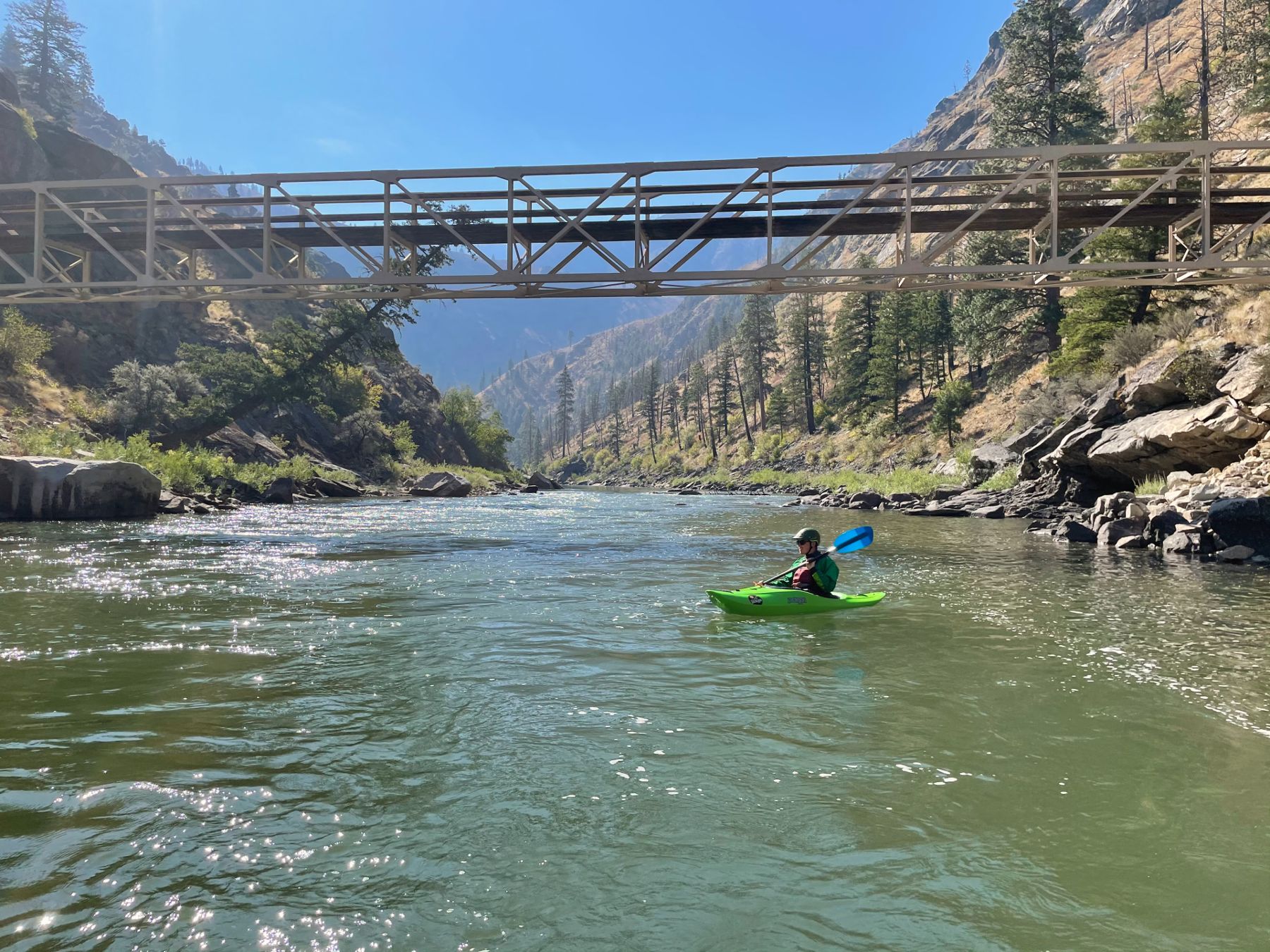 It was August 6, 2021, a year and three months after my brother, Chris, died. He was supposed to have been on this trip; my mom and I had bought a seat for him and one for my dad for Christmas in 2019. But that was the last time I saw Chris. On May 27, 2020, he told my parents, who he was living with, that he didn’t feel well and was going to bed early. It was the height of the pandemic, so my mom didn’t hug him. But she did wish him a good night and tell him she loved him.

Normally back then, she and Chris would get up early and walk in my parents’ southern Nevada neighborhood before the desert sun superheated the blacktop. So, when 9 a.m. and then 9:30 came and Chris hadn’t come out of his bedroom, my mom texted “You alive in there?” And when he didn’t answer, and she went to his room, opened his door, and saw him lying on his back with dried blood crusting his mouth, neck, and upper chest.

Chris had been an alcoholic for more than three decades, and at 53, his liver had finally ruptured. That’s a very sad story, but sadder still is that for seven months before he died, he’d been sober. When I saw him on Christmas of 2019, he was just a month into sobriety. I knew he struggled—and I know how transformative a river trip can be. My mom and I had intended the Middle Fork trip to be a kind of reward for his hard work, a rejuvenation after so much sorrow. So, when he couldn’t come in his human form, she, my dad, and I invited my son, Scout, to go in his place, and Scout, my dad, and I brought Chris’s ashes with us. 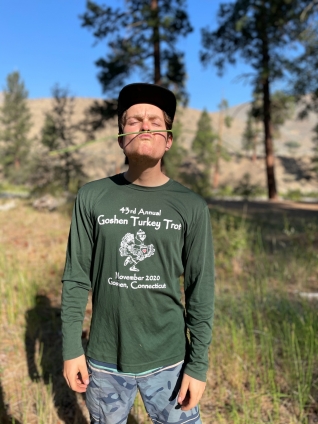 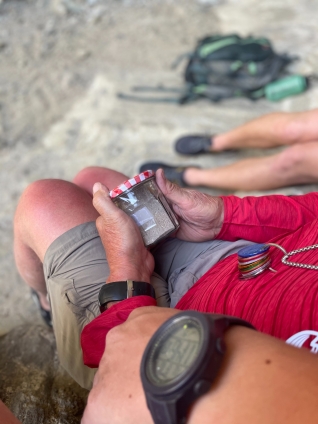 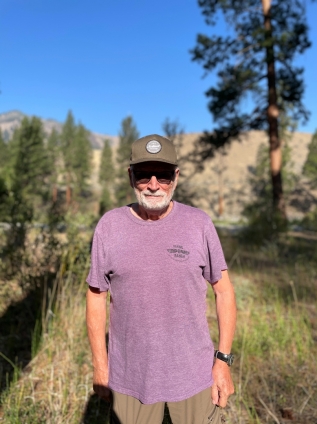 Less than 24 hours after we pulled into Canyons’ headquarters, we were standing in the McCall Aviation office meeting our trip mates. I was the family spokesperson (me before then: “Don’t tell anyone I’m a journalist!” Me then: “Look at me! I’m a journalist!”), Scout was the token teenager; and my dad carried the duffle with Chris’s ashes. That we were harboring dead matter was a secret to the handful of folks who’d fly to Indian Creek landing strip with us, but not to the guides on the trip. In fact, one of them, a smiling 18-year-old with a swimmer’s build and a hint of pink across his cheeks, was Scout’s younger brother, Hatcher, who’d started a job that summer in the Canyons warehouse.

By the first week of August, he had worked his way from packing trips to flying all of the food for a Middle Fork trip once a week to Indian Creek in a Cessna. He’d unpack the food from the plane and haul it to the river. Then he’d fall asleep under the stars to the lullaby of riffles. The following morning, he’d pack the food onto boats that his fellow guides had deadheaded from the put-in.

As soon as Hatcher told me about the best part of his promotion—flying in bush planes—I thought of Chris, who had always wanted to be a pilot. That lead to me thinking of how thrilled he would have been to putter through the origami folds of the Frank Church Wilderness’s mountains with “Hatch Daddy,” his favorite nephew. Hatcher loved him the most of my three kids; he’s also both the most guarded and most emotional. And because he’d already left for Idaho when we had Chris’s long-overdue memorial in Nevada, us bringing Chris along was especially powerful for Hatcher. 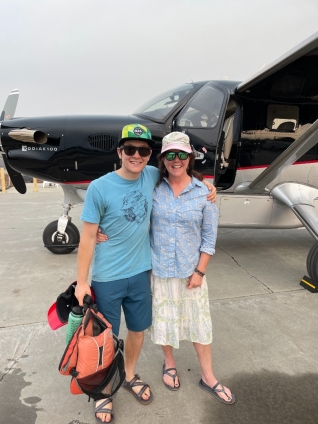 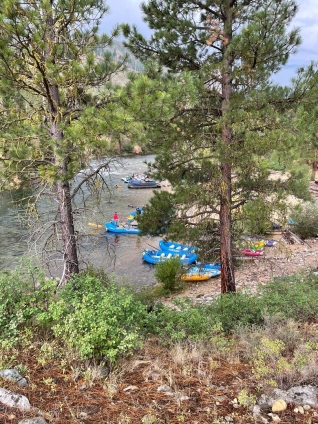 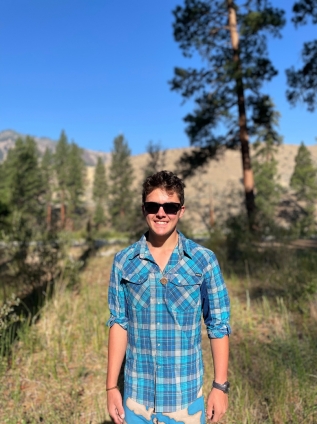 He and Greg had also devised a secret. They told us that Hatcher would be too busy to join our trip. We didn’t argue—it was his first summer and we wanted him to show how hard he could work. We also believed him when he said he was “just going to fly with us to Indian Creek, help the guides launch the trip, and then hop back on the plane when the pilot signaled.” So, I laugh-cried when the plane took off and Hatcher popped out from behind a tree. Then I just cried because Hatcher and Greg—mainly Greg—had made the arrangement. They weren’t the only ones in on the secret though. As we’d soon find out, our mission to honor Chris was also a top priority of the guides, mandated by Greg.

From the put-in, our group of 20 piled into duckies, paddle rafts, and onto the cooler tops in oar boats. The sun beamed down and the sky was cloudless. The water was an emerald green, warm enough to swim in. As we took off, I looked at my dad, who gave me a wistful smile. The journey to introduce Chris to my family’s favorite place in the world, and then leave him, had begun. 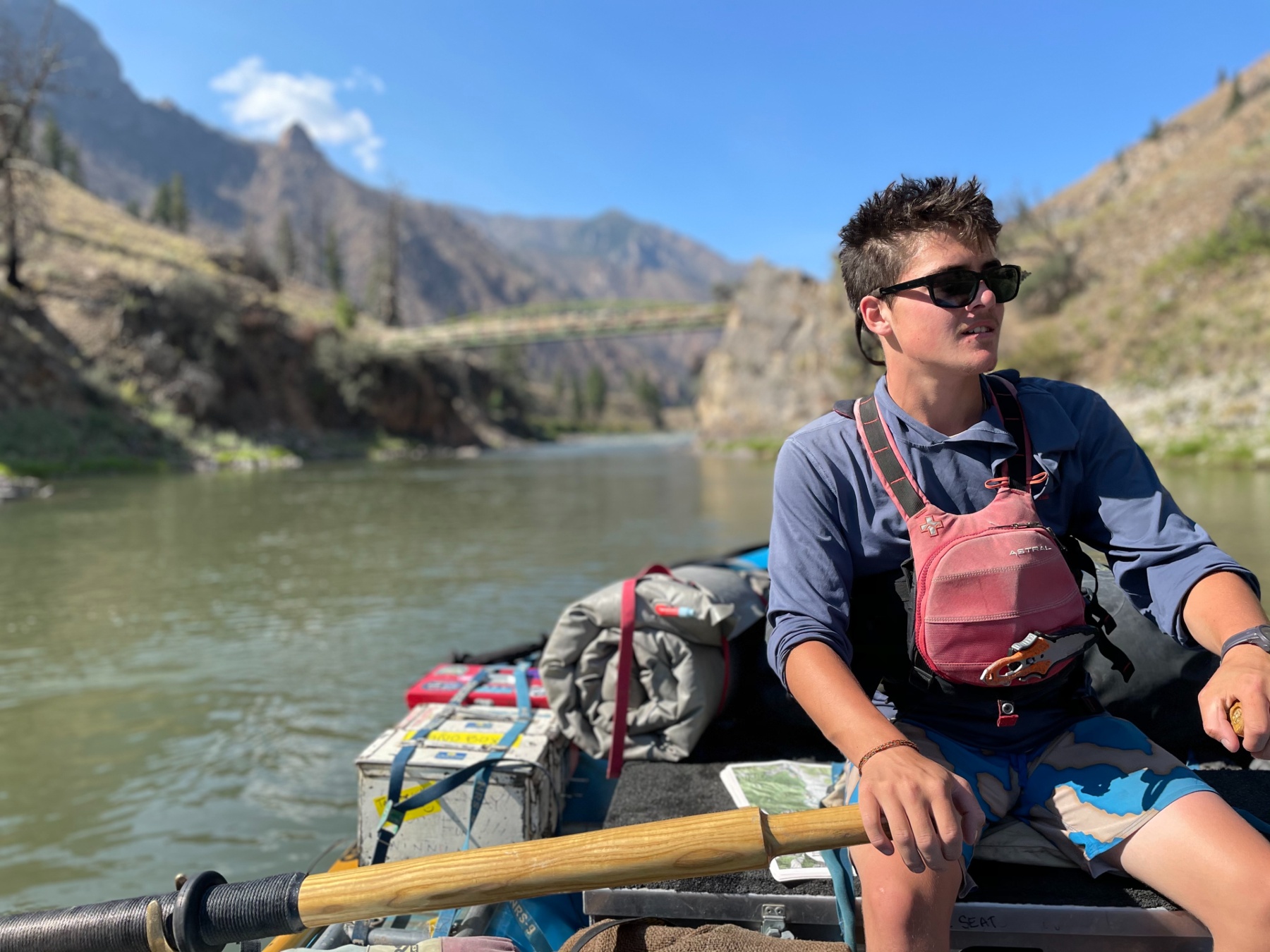 Two days later, we were getting the best of a river trip with Canyons. In low water and perfect weather, the sweep boat piloted by Hattie, Tessa, or Tyler would leave early in the morning. Then two oar boats would go, usually one with a lone guide and my dad. Then the “mama duck,” or paddle raft, leading out the duckies. And often, Hatcher and I were somewhere in the mix, R-2’ing a 10-foot inflatable. That’s when we’d get to say a few things about Chris, conjuring his spirit.

Hatcher talked about how much Chris would have loved the simple act of floating, most likely on an oar raft, with one of the guides rowing. Knowing Chris, he’d want to ride with Bobbi or Tessa. He might ogle them a bit, but he’d win them over with his sense of humor. I thought of how much he would have goddamned loved this place with its twisting canyons, black cliffs, hot springs, sagebrush scent, and Sheepeater ruins. He wasn’t much of an adventurer by the time he died. But I fully believed that the river might have stirred his spirit.

It wasn’t much later that our trip came to a screeching halt, when Tessa and Syver, trying to bump the sweep boat through a bed of rocks in an impossibly shallow rapid, augured it in and couldn’t get it unstuck. As the rest of us came upon them, the other guides initiated a coordinated effort to free the boat. Each guest participated in some way—either by watching up-river for other groups, or by being part of the fire-line Hattie formed to offload some of the sweep’s gear, or by the younger passengers—like Bobbi’s stepmom—helping the older ones—like my dad—carefully navigate the boulders lining the river to get from point A, where we’d stopped, to point B, where we re-loaded our boats after Tessa and Syver freed the sweep. 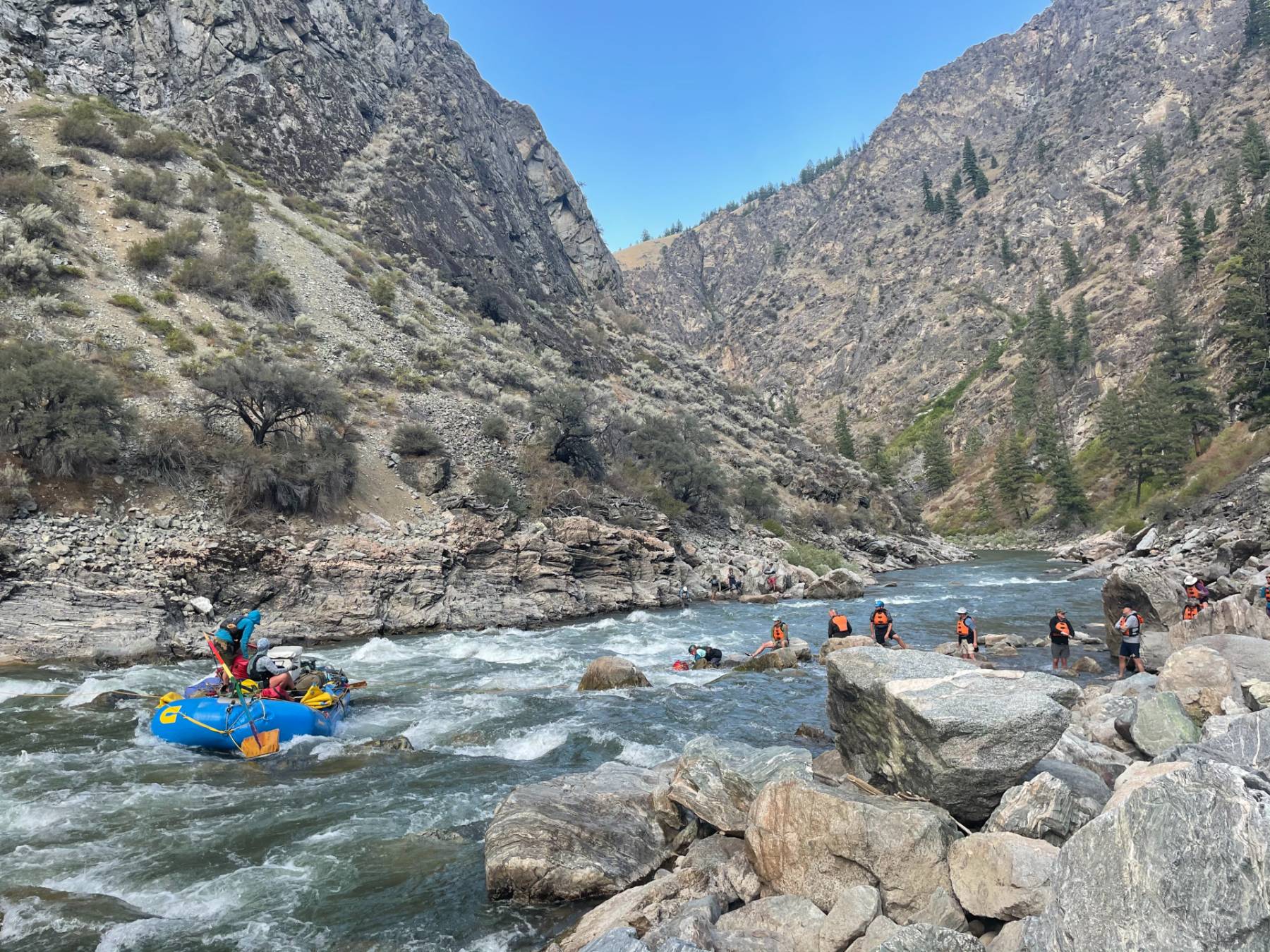 It’s moments like these (and many others) that dismantle the walls between strangers on a commercial trip. Maybe it—and a couple too many beers—is what loosened my dad up at that night’s camp. Whatever it was, he let it leak out that we were carrying Chris’s ashes. I heard him telling Syver with tears in his voice. But Syver was a perfect listener. My dad also told him that we might want to leave some of Chris on the river if we could find the right spot. The one Syver suggested sounded perfect, although before we would give it the thumbs up, we had to check it out.

That wouldn’t come for a couple more days, during which we got to experience more of Canyons’ magic. It starts with Greg, whose name, for me, conjures the word Love. He loves his people (literally hundreds of friends, and family), his work (outfitter and guide, but also eternal party host, acclaimed watercolorist, and champion of the LGBTQIA movement), rivers, wilderness, and humanity. His guides, including, now, Hatcher, embody Canyons’ ethos while bringing their own skills and love. What clients get is stories of their globe-spanning adventures, infectious enthusiasm for Idaho, and a kind of rugged concierge service that ranges from showing you the cleanest line to take through an intimidating rapid to bringing the Sheepeater pictographs to life through their knowledge of history to leading you through muscle-loosening yoga poses as the smell of bacon wafts over the beach.

We had all of that, and, as word of our mission slowly spread throughout the group, a kind of love and support I’d never before felt. Ever so tentatively, different people would approach us and ask a question about Chris. They knew Scout, Hatcher, my dad, and I were on the trip to memorialize him, but it took added probing to learn we had him. I thought we might weird them out or mute their fun, but they only wanted to know more about us, our story, and my big brother. I’ll be honest: we were pretty raw the whole trip. But once the others knew our secret and supported it, we were unselfconsciously able to do things like throw our arms around each others’ shoulders and rest our heads together and cry over the finality of what was coming. 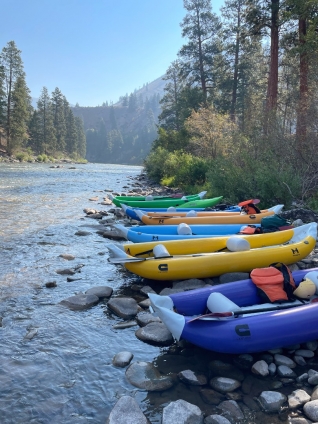 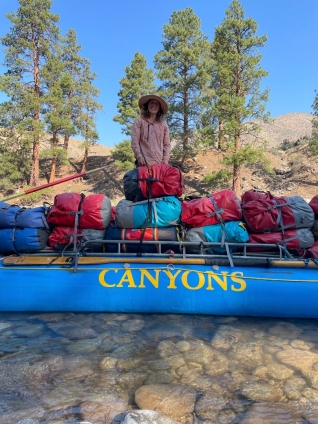 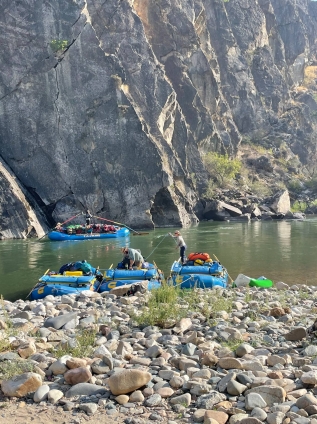 We’d had Chris’s body cremated but we hadn’t buried any of his ashes. On the next morning—the second-to-last of our trip—we would finally make that happen. The guides had made a plan that everyone would understand once they revealed it. After breakfast, yoga, and packing up, the sweep boat would depart camp about an hour early. Just behind it would be Syver, my dad, Scout, and me in an oar boat. And off on his own, but within sight, Hatcher would paddle a kayak. We’d be able to see him, but we wouldn’t know that as he paddled he’d be crying.

As Syver rowed, Tyler steered the sweep while dancing to a tune we couldn’t hear on his AirPods. In reverence, I think, the rest of us were quiet. Well, that’s not exactly true: Syver, always a guide, continued a story of the river that he’d had going all week, about the geology, the history, the wildlife, and the people. My dad, Scout, and I didn’t mind. It gave us more knowledge about the place we’d leave Chris, which we came to as the day’s first rays of sunlight touched the river. 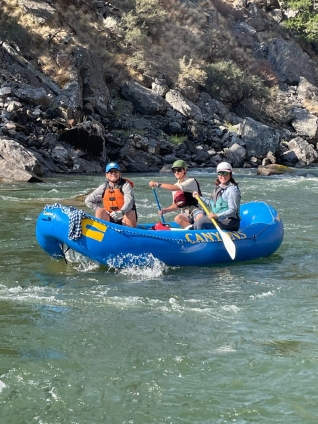 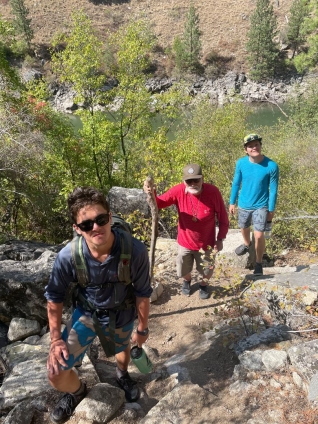 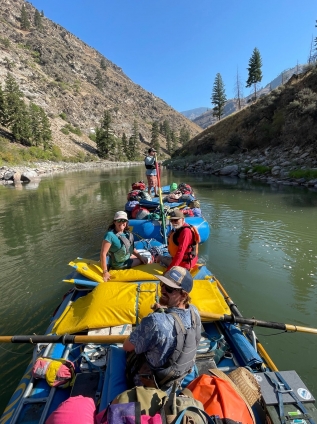 It was a hike to get there, but Tyler and Syver said there was no hurry. The others wouldn’t arrive for an hour, so we could take the time we needed. My dad reached into his dry bag and pulled out the Bonne Maman jar. The tape he’d affixed to its lid had held; inside were the grey ashes, minerals, and bone shards of my brother. My dad asked Hatcher to carry Chris in his daypack as we began the hike to the place we thought we would leave him.

I can’t tell you where it was, but I like to think it was as perfect as heaven. A place where Hatcher can visit him each time he floats the Middle Fork.

A perfect, forever spot where Chris can always hear the river.