For a long time I wondered about kayak fishing. It’s not like I needed any more reasons to get on the water, but I have very fond memories of fishing when I was a kid back in Argentina. I also find other paddlers who incorporate fishing into their kayak adventures—or weekly paddling routines—really inspiring.

A few years ago, my family and I relocated to a region with easy access to lots of coastal paddling, creeks, and marshes — all filled with sea life. We loved the idea of adding locally harvested, fresh-caught fish into our meal rotations. So it felt like the perfect time to give it a try. What I wasn’t expecting was for fishing to make me sound like a 10-year-old again when I caught my first fish. 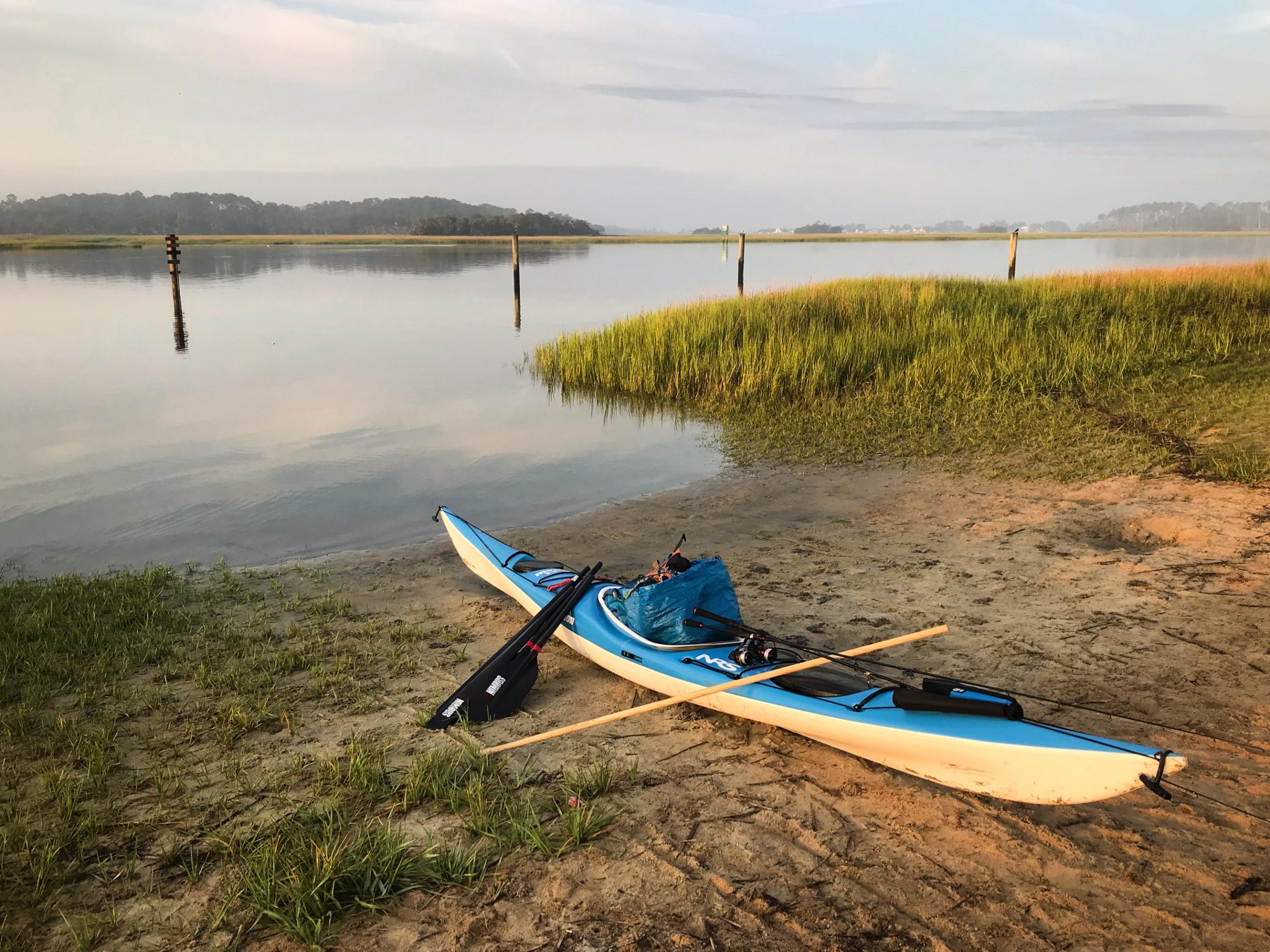 Before my first fishing venture, I researched what types of fish were local to our waters, which would be a good idea to focus on and what equipment would be appropriate. I reached out to friends for advice, got my fishing license and checked local regulations. I purchased a cheap rod online, some lures—the basics—and was ready to go.

I’d be looking for three types of fish: redfish (red drum), trout and flounder. Georgia’s tidal creeks and marshes feature plenty of oyster beds, tall grasses, and varying depths, which would hopefully offer plenty of opportunities to catch something. These fish like using all these types of features to ambush bait—or so I read.

I’d have to get used to using a rod again. It had been a while since my last cast. Though, thankfully my casting started to improve throughout the first day. I felt a few bites, eventually, but didn’t get anything on the line. I changed locations throughout the day, trying to take advantage of the features I had researched. 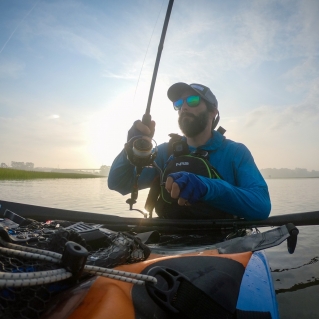 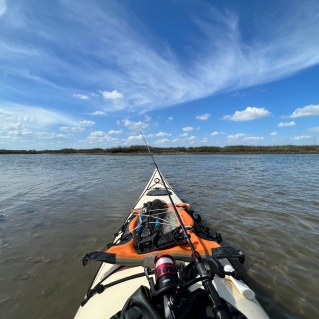 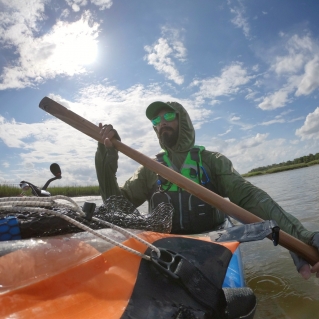 I started day two in the spot where I had the most bites the day before. Some hits came, but alas, no fish on the line. My casting continued to improve, and I started to get a feel for the equipment. By now I had seen the full tidal cycle in several spots, so I hoped it would help me find better locations.

I ended the day at the mouth of a creek that spoked off the main channel. It had a sand shelf and significant depth change. I wondered if I had been trying spots that were a bit too shallow overall. Skunked again, it had still been a wonderful day on the water and was absolutely worth it.

When I got home, I pulled up satellite imaging of the area and realized that all the spots I had targeted were indeed really shallow—the shelf at the end of the day and the creek it led to would be my next area to explore as it would give more options with deeper waters. Shallow is good, but I found I spent a long time at low tide in areas that were extremely shallow. 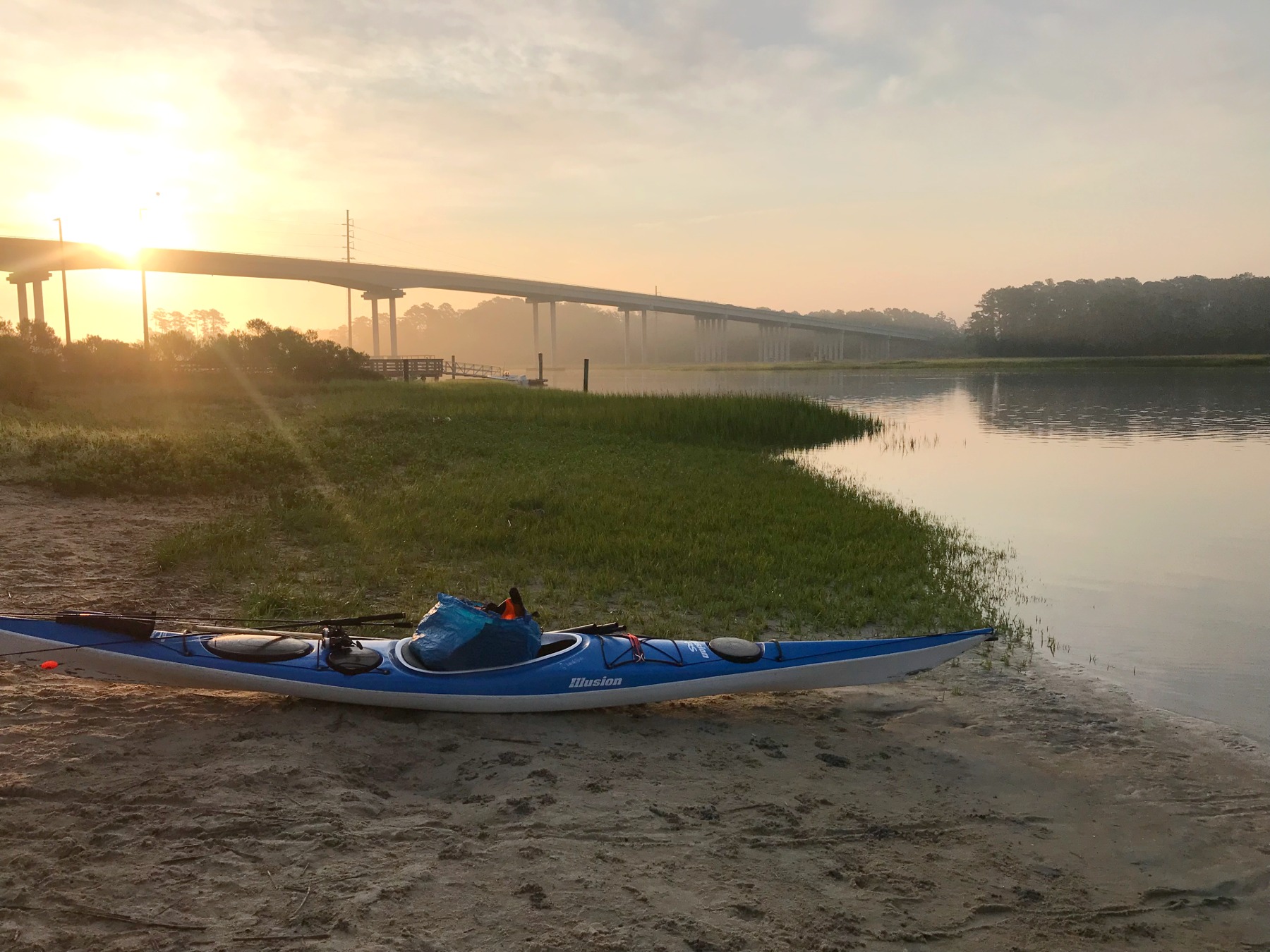 By the third day I was ready to change things up, and now the tides had cycled through enough to start the day at full high tide. This time I’d get to see the entire cycle as the water drained, and my aim was to find as many new locations as possible. The bites were significantly more intense, and I managed to get two fish on the line. Sadly, both came off. I’d have to work on setting my hook. But still, progress nonetheless, and I now had a specific location to target on my next outing. 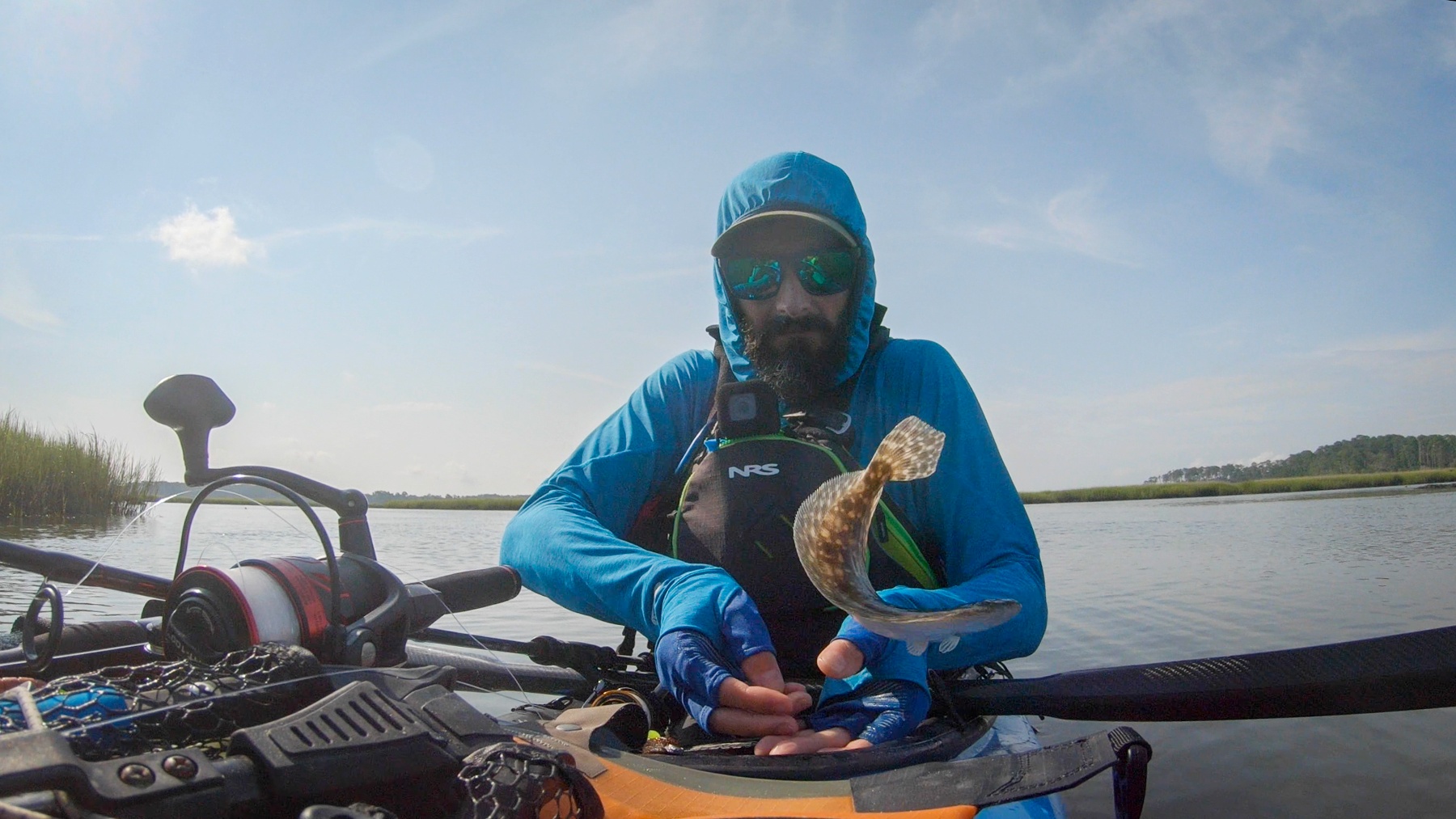 On the fourth day, I had my previously scouted spots in mind and was ready to take advantage of the ebbing tide when I realized my cheap reel would not lock in place. It allowed the line to continuously go out. Despite cleaning the saltwater from the reel each day, it seemed the mechanism had stuck, and then just let go. I tried taking the reel apart to fix it but couldn’t get it working.

The thought crossed my mind if I should head home and come back another time, or if I should work on finding another way to get my line out. I kept thinking of my time in Norway when we used a simple piece of wood with a line and a couple of hooks, and that was plenty to catch enough for some stew at camp. Granted, water conditions, depths, and types of fish were different but overall, I had taken the day off to be on the water and didn’t want to give it up. So I tried a couple of different setups by using my water bottle to hold the line. Eventually, I decided to run the line through the rod and reel it back by hand. 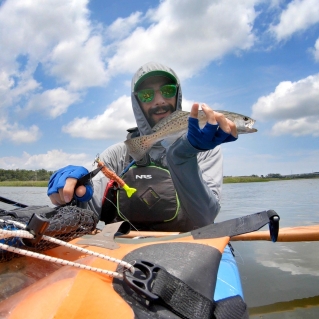 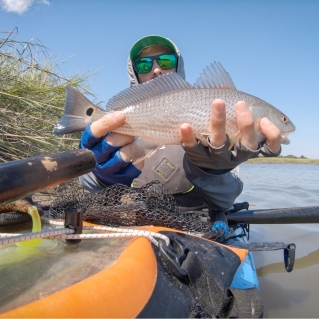 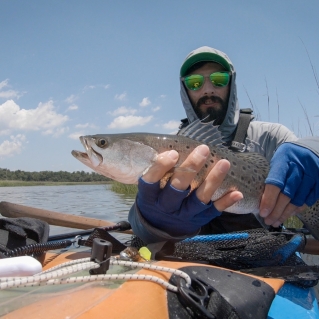 And then, when I least expected it, I caught my first fish. A beautiful little spotted trout came up showing me the setup worked. Also, my new scouted locations had the right idea. After releasing it, I focused on finding bait, spotting ripples moving on the water’s surface and following their patterns. In time, I caught two flounders. The first was a bit small, but the second was a 13 incher. the minimum length to keep is 12. While it may not have been enough for a full meal, it was a delicious addition to our dinner that evening and felt like a huge accomplishment. 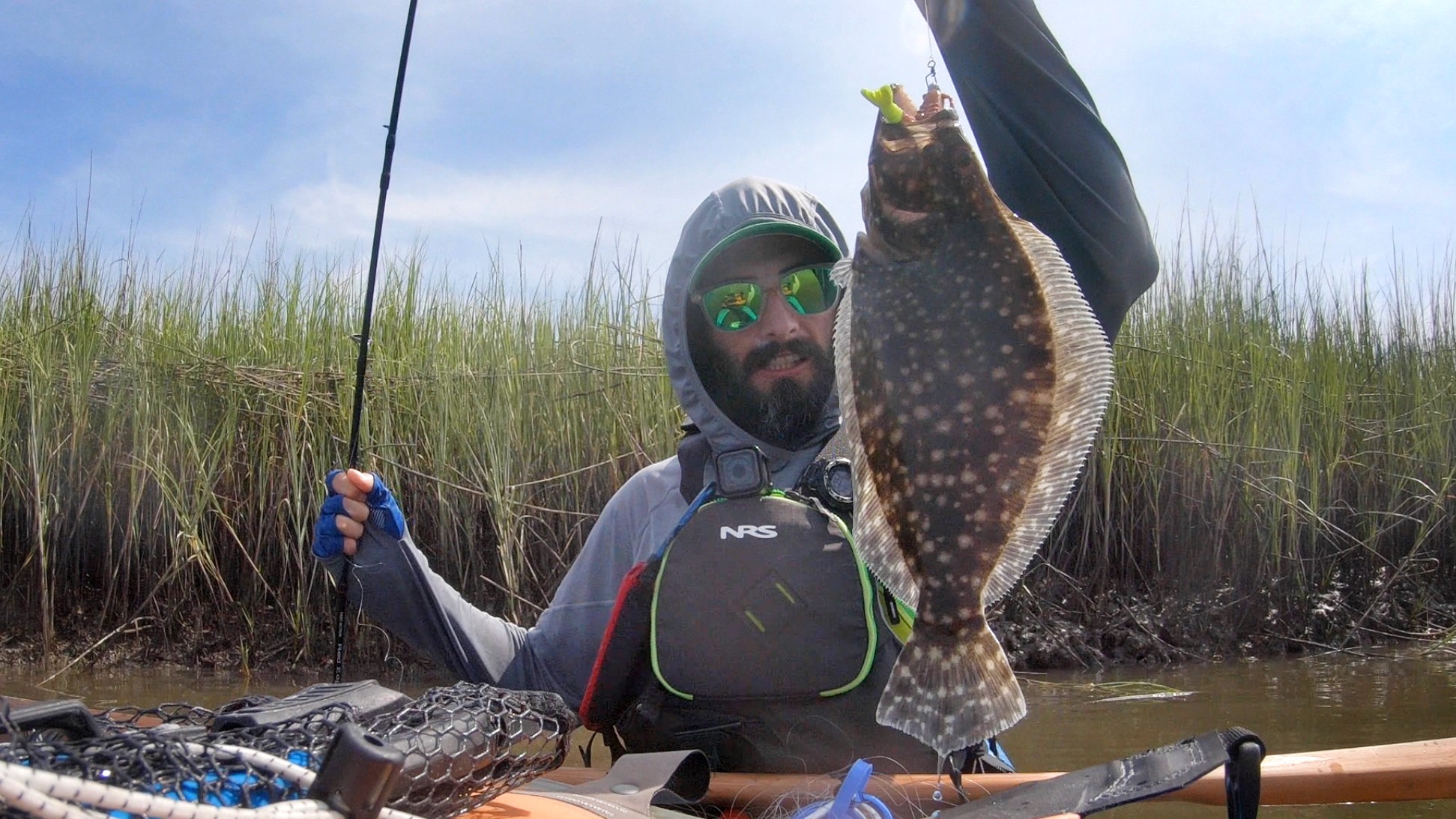 When I set out to fish from a kayak, I knew I would enjoy being on the water all day, learning about the locations, the wildlife, and hopefully the satisfaction of catching a fish. But I never expected to enjoy it this much. I loved it. The magnitude of life found anywhere you looked, the sounds, the tidal transformations—it’s truly incredible. I thought I was taking it all in when we paddled and explored these areas, but so much had gone unnoticed. Day after day, I discovered so much more hiding in plain sight.

And then when I finally caught fish, the excitement of the catch, hoping to land it, releasing the smaller ones and keeping that bigger flounder, it felt just like I did when I’d get lucky enough to eat my catch as a kid.

Editor’s Note: Guest contributor Luke Rovner is an NRS Ambassador, sea kayak instructor and filmmaker. Combining his experience as a photo and video professional with a love for kayaking, he started Kayak Hipster with the goal of capturing outdoor adventures and sharing kayaking tips. Check out his short edit from his first fishing adventure on YouTube.