An Ode to River Maps

Author’s note: Because I went to graduate school for geology and cartography, my overestimation of the importance of a map is likely rooted in ego and academia. Though I sing the praises of river maps, once upon a time the Earth was mapped as flat. Fail safe though they seem, I’m willing to play devil’s advocate to my own mania.

Classic. Try as I might to be on time, I’m arriving a little too late to the put-in for my combination birthday-Thanksgiving-maiden voyage river trip. Upon arrival, trip leader Renee Patrick hands me a conical, confetti print birthday hat and gives me that hallmark, “Chill out, we’re all good,” warm smile. A local thru-hiking, graphic designing, conservation celebrity, Renee is a personal shero and incidentally got me my very first freelance writing gig many moons ago. Amid my Tasmanian Devil’s late arrival, Renee shares the most basic and critical information, “We’re camping at Jones Canyon tonight.” And because of the genius of modern two-dimensional low-tech river maps, in less than a sentence, I get on the same page with her and we head downriver.

Shoving off, I tossed my shiny new Deschutes River Boaters Guide (the standard river map for that section) into the cluttered grave that constitutes my overstuffed dry box. 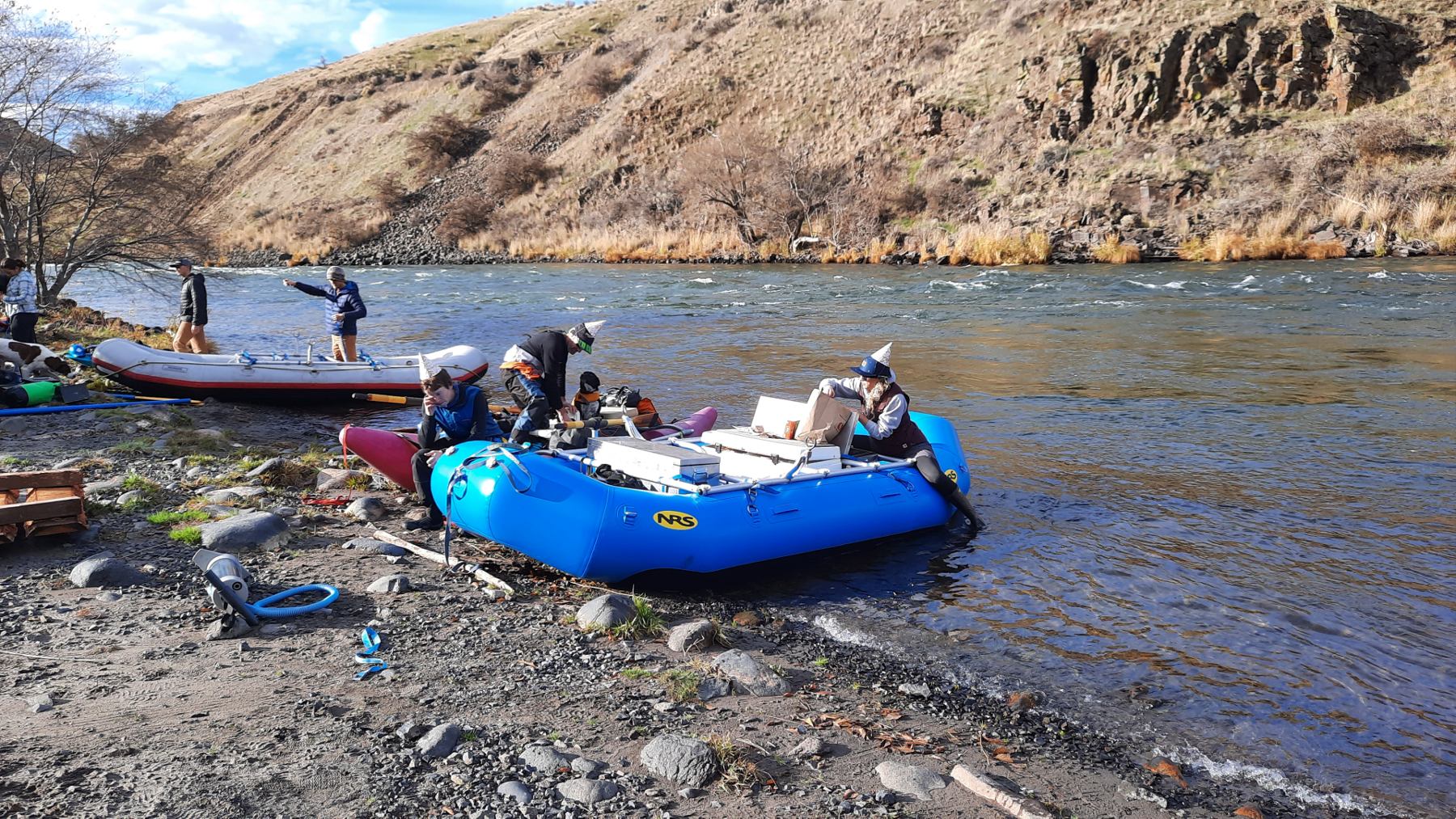 River maps are a small but mighty piece of gear. How do I know this? For one, they elicit confidence and a felt sense of security in my most anxiety-ridden river moments—at least for me. Holding and reading a map is one’s crude equivalent to central command in the backcountry. In a world riddled with screens and information at the tap of a button, the handheld binary paper map is both novel and understated in guiding one on their river journey.

I can always tell how nervous I am on a river by how often I look at the river map. And, how tightly I white-knuckle it in my hands as I brandish it. If I’m sending a virgin run, and there’s no map, I’ll search the internet high and low for, at the very least, an ancient, defunct river sketch that roughly indicates rapid locations—and fingers crossed—includes some beta. For some reason, during first-time whitewater, pinpointing my location on a two-dimensional rendering of intermingling cliffed-out topo lines and drainages gives me peace of mind and a sense of control in an otherwise unknown downriver experience. 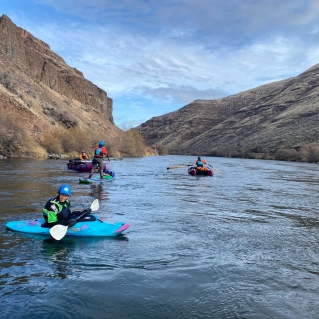 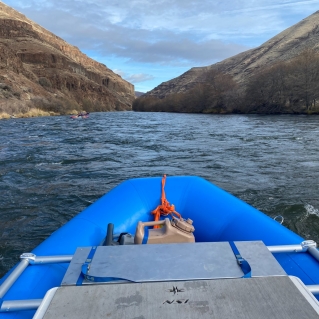 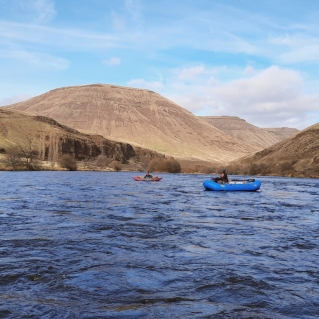 I felt very comfortable on the Deschutes River. Especially with the experienced group I was rafting with during last year’s annual Thanksgiving Lower Lower Deschutes River trip from Buck Hollow to Heritage Landing State Park.

Unfortunately for the usual boating battalions keeping me company on rivers where I am less comfortable, my nervousness manifests as shouting out, in regular half-mile to one-mile intervals: “Where do you guys think we are on the map?” Or brashly noting each approaching rapid and reading its description out loud like a total gaper. All arguably forms of involuntary river obsessive-compulsive disorder.

During this year’s Thanksgiving trip, three separate styles of river maps were enlisted. An original Outward Bound Lower Deschutes front and back instructor’s mish-mash one-sheeter, the most up-to-date Deschutes Boater Manual and the original, spiral bound, published circa 1979, Handbook to the Deschutes River Canyon. 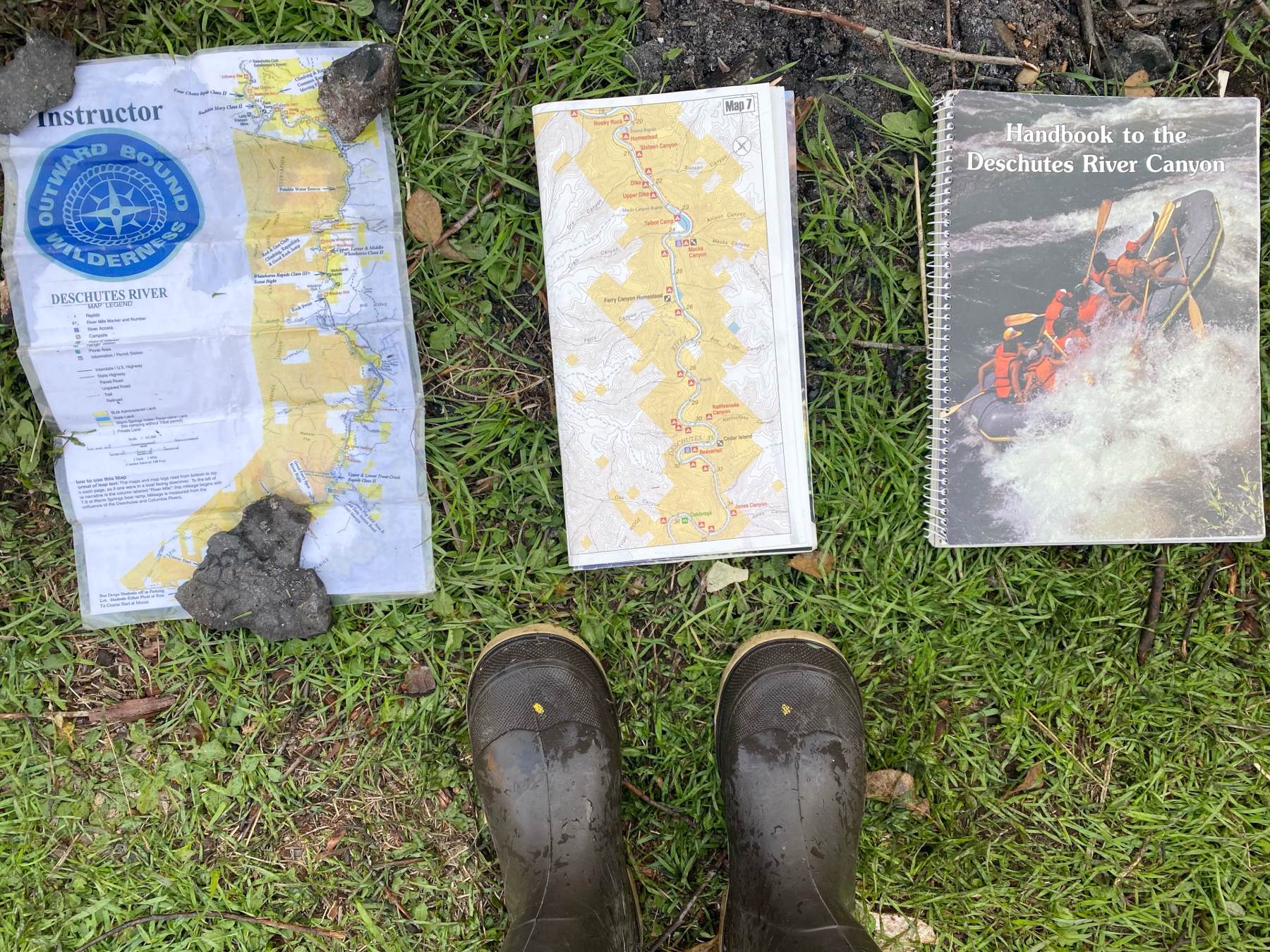 We found the first map style to be the most useful in terms of accessibility. A laminated, foldable, quick reference stored in one’s life jacket. Leave it to a thru-hiker to keep it simple and convenient. The Deschutes Boater Manual is my go-to. With waterproof pages, interpretive notes, and the most recent river beta in print—you can’t go wrong.

The OG Handbook to the Deschutes River Canyon was most often pulled out after arriving at camp and looked over for its long-lost iconography. A library and treasure trove of river carnage that captured premier river fashion of the times and prototype gear from seasons of yore. My favorite feature enclosed was the randomly dispersed catalog of hand-drawn, Deschutes River fauna like owls, otters and bighorn sheep.

The foldable life jacket quick reference is tidy because it easily stows away in a pocket and the Handbook never gets in the way because it only comes out at camp. The unsolvable question: Where should the Deschutes Boater Manual reside while on the river? I’ve tried putting it in a clear plastic waterproof map sleeve which clicks shut with the equivalent of a souped-up beefy Ziplock zipper. This worked for a while but eventually the plastic yellowed and the zip wasn’t easily managed for how often I needed to turn pages.

Invariably, on most trips, the river map ends up alternating between floating around the raft unencumbered or buried under clothes and accoutrement in the junk show dry box I sit on. 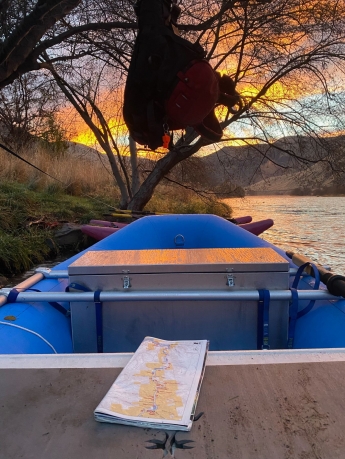 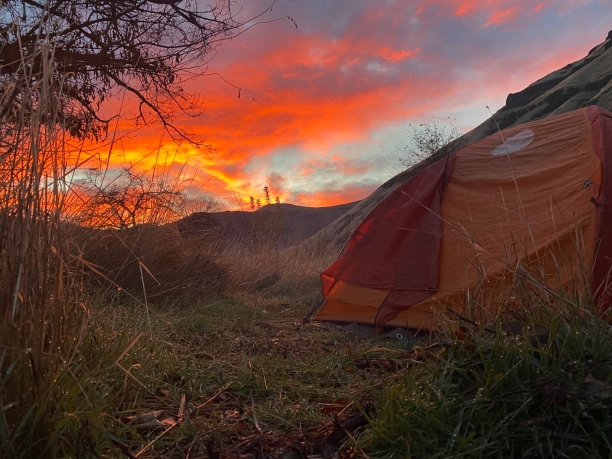 Despite my seeming nonchalance regarding its whereabouts, there are many reasons to carry and applications for a river map.

One of the most relevant to our Thanksgiving crew, and specific to the Deschutes River, was locating campsites with pit toilets to avoid using our ammunition can groover. Or rather, to avoid having to clean our ammunition can groover after said use. Unfortunately, this reasoning was in vain as, over the years, many of the Bureau of Land Management loos have inadvertently burned to the ground in wildfires. This revelation gives new meaning to the phrase “blowing up” the bathroom.

Second to where to lay our daily constitutionals, having a map handy gave us confidence in finding scout points just upstream of rapids that might pose a danger. While most of the rapids were a cakewalk, one terraced drop with shallow, sharky (rocky) waters, Rattlesnake (III) begged a sneak peek. If you can read a river map well, you’ll always have the option of pulling over, scouting and even portaging. If you can’t read a map well, you’ll miss the scout and have to try your odds and run blind. 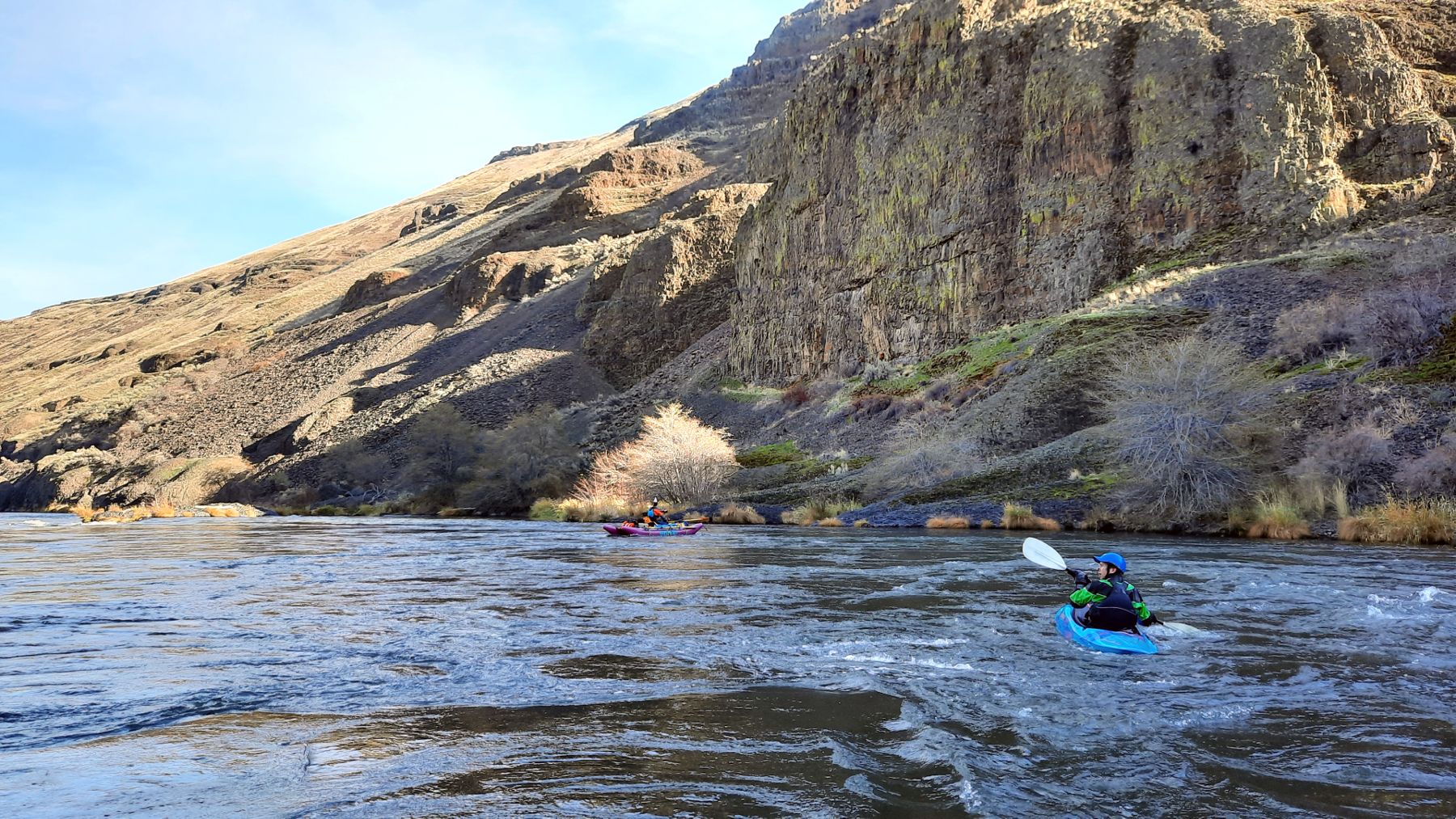 Right before launching for the day, just point at the map—everyone will nod—and boom, plan made. Or, on more difficult missions with more variables and logistics, pull out the map around the fire at night. Pass it around to see if anyone has questions. If not, steady forward on the plan.

Fourth, multi-page maps like the Deschutes Boaters Guide oftentimes layout conservation best practices and expectations as determined by local river managers. It’s good practice to read through these before getting on the river and to keep it easily accessible to reference if there’s any question about fire regulations, disposing of waste or other wilderness best practices. 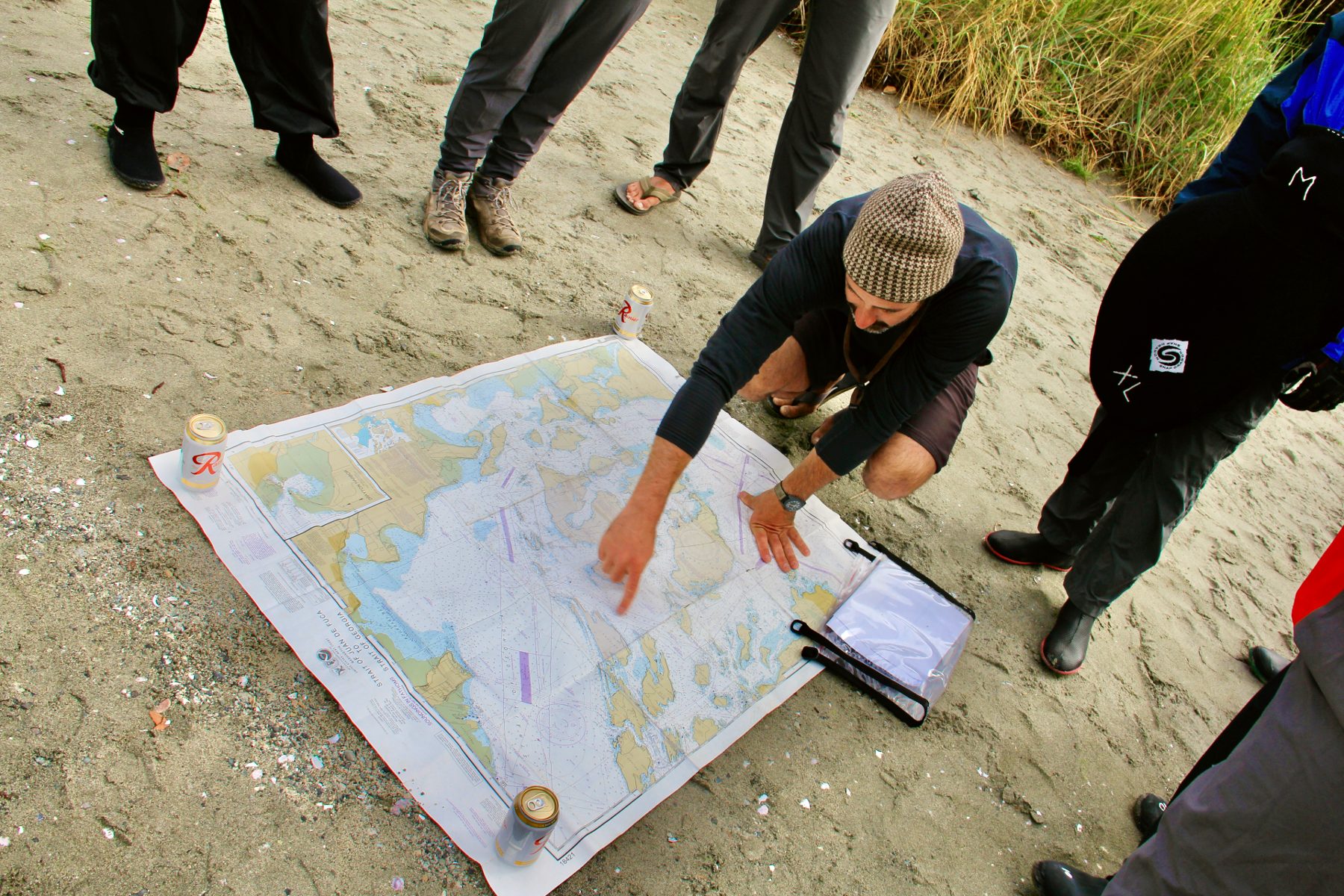 Finally, finding and stopping at points of interest always adds a charming element to any river trip. On the Lower Lower Deschutes River identifying features like bridges, historic railway sites and basalt formations create another dimension or facet to the trip. Yes, boaters are the center of the universe. However, questioning what other industry and history ties us to others who have also traveled along the river corridor we are traversing is an enlightening inquiry.

In fact, when in doubt as to my location on the map, I use the ubiquitous train tracks and powerlines the Lower Deschutes River corridor is paralleled with. If I look at the relationship between the railroad or power lines and the river and find the spot where they diverge—boom I’ve found myself on the map.

Of course, as can happen with all manner of river gear, there are ways maps failed and disappointed us on the holiday trip. Besides dubious toilet beta, fluctuating river levels (sometimes day to day, certainly season to season) affect the accuracy of rapid descriptions. The river is a dynamic place where rocks move, obstacles shift and water levels flux. No name rapids, unmarked holes and newly fallen snags can all pose threats that can’t be captured in real-time on a river map. Therefore, while the map holds critical details, nothing can beat real-life observations. 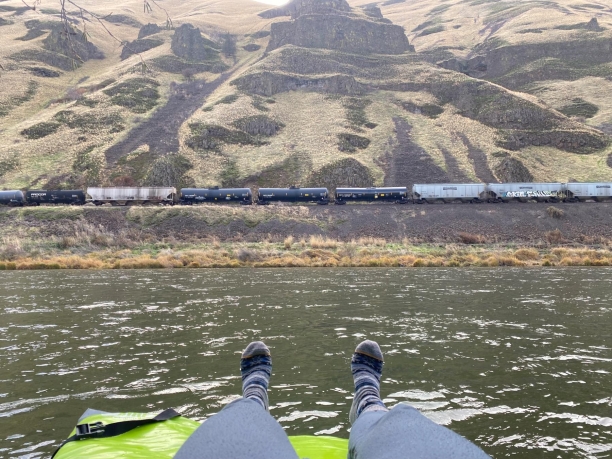 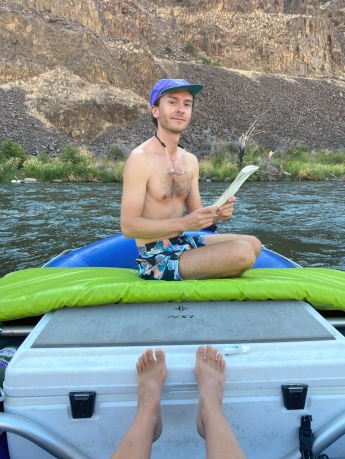 Admittedly, the most unfortunate and frequent ways river maps have disappointed me are related to user error. If I had a dollar for every time I thought I was at point A and I was really at point B…

One thing I love about maps is their unique idiosyncrasies. Some read from the bottom of the page to top of the page in alignment with a south to north river flow. Some river maps pages get stuck together with repeat use in a wet environment, even though the pages are touted as waterproof. They must be carefully pried apart and sometimes a small overprint from the stuck page remains on its counterpart. Sometimes when you share a river map for the first time with a novice boater or passenger, their eyes light up and they don’t put it down for the duration of the trip. This warms my heart. 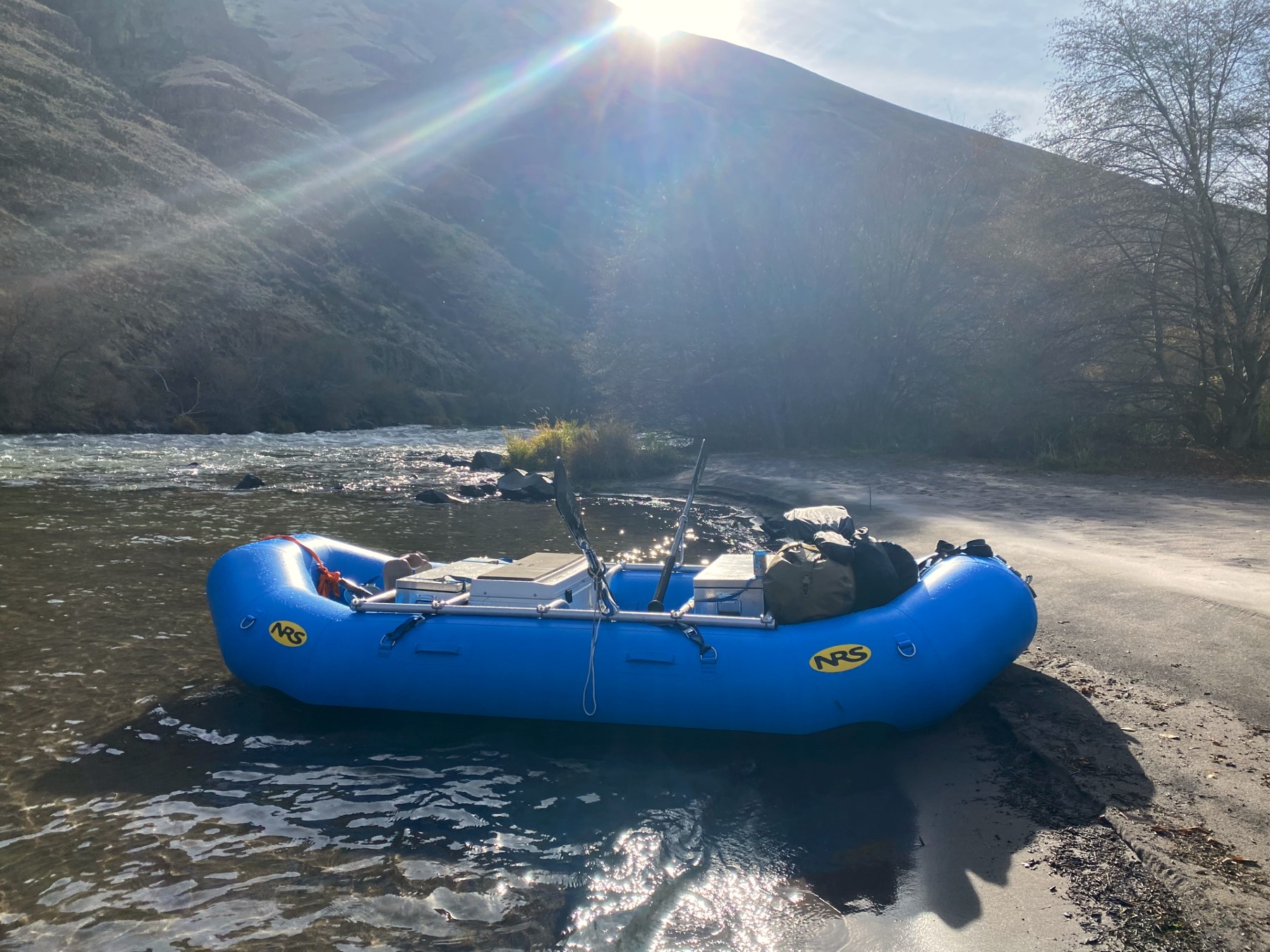 Occasionally, one wants to boat a river for which no commercial river map has been made. What then?

Though most of the John Day River, one of the longest free-flowing rivers in the contiguous United States, is included on a river map, the most upper stretches, the North Fork, isn’t. Once, during the throes of a last-minute solo paddleboard mission, I grabbed a page from a road atlas depicting the 45-mile stretch in painfully zoomed-out detail. If I’d planned better, I could have likely ordered a topographic quadrangle with more detail, but at the launch, the travel atlas was all I had. It was a good resource for knowing mileage at bridge crossings and confluences, and knowing where roads were in the event of a worst-case scenario hike out. I fervently believe relative location check-ins on an undetailed map are better than nothing.

Although I rarely looked at the atlas page that day on the North Fork, knowing it was tucked away in my dry bag gave me a mysterious sense of security. I felt more prepared wielding a floppy piece of worn-through paper with dots and lines and labels than without it. I felt more confident with this congruent, predictable connection to civilization. Even though I was alone, I never feel totally alone when I have a river map.