“It’s such a radical action to take, to be able to play.”

Paul Robert Wolf Wilson, a Klamath and Modoc Tribal Member lives on the Wood River in the small community of Chiloquin near the headwaters of the Klamath River. The Klamath flows through his ancestral homelands of Southern Oregon and Northern California.

Paul’s voice takes on a quiet reverence when speaking about the lands and waters he calls home. This morning, like most, he went for his morning run and then post holed about a mile and a half through crunchy spring snow to the headwaters of the Wood River to fill up his seven-gallon jug of water from the spring. Once home, Paul hops in the river for a frigid cold soak.

“Hearing the birds above, feeling that water and the big old snowflakes, that brought me the most joy today,” Paul said with a smile. He laughed and added, “There’s nothing to feel but present when you’re in 35-degree water!” 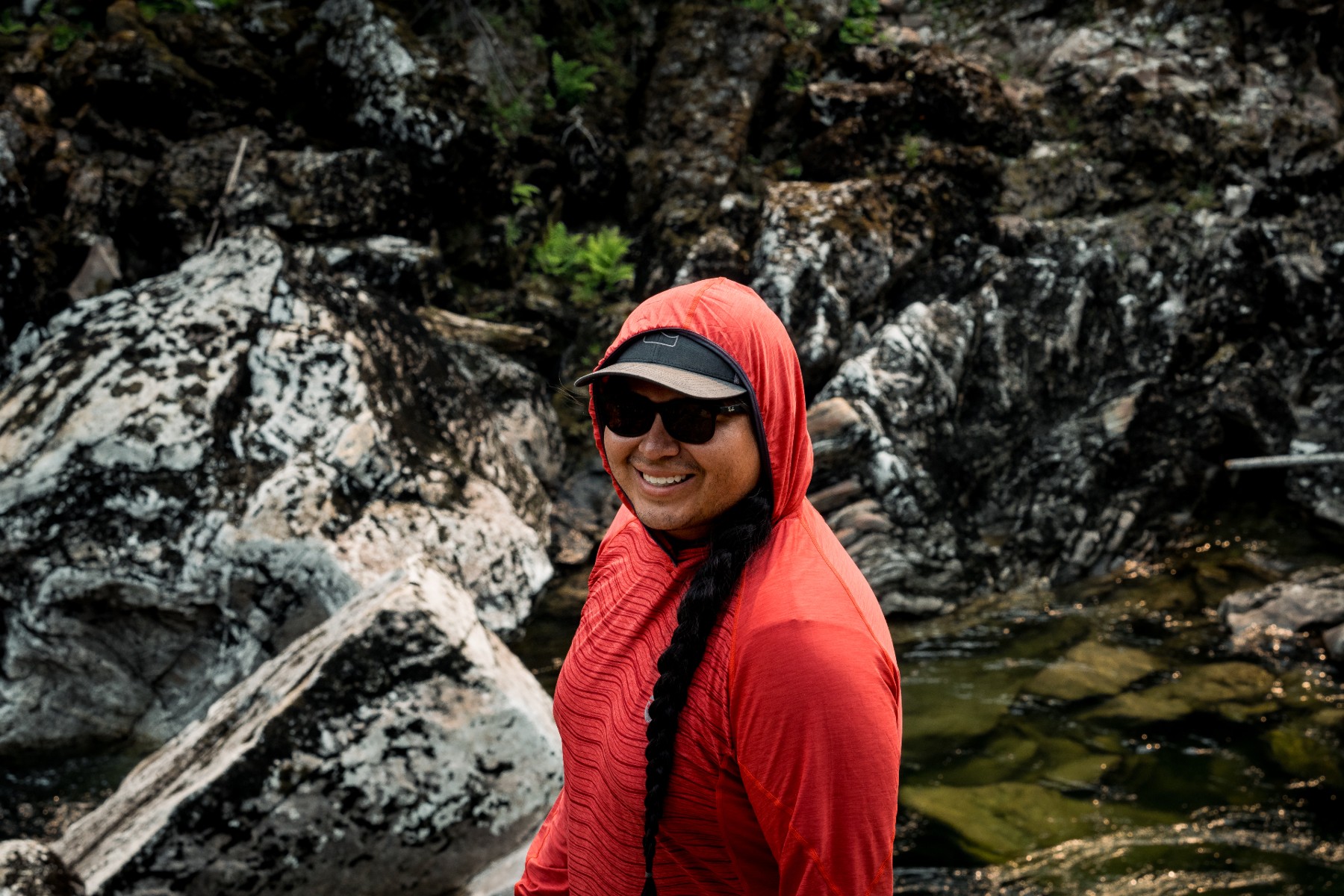 Paul is a photographer and the chief storyteller for Ríos to Rivers, an organization that invests in underserved and Indigenous youth who are intimately connected to their local waters and supports them in building the next generation of environmental stewards. Founded in 2012, Ríos to Rivers exchanges have connected more than 200 youth from 19 endangered river basins in seven countries and community leaders from 13 Indigenous nations.

“That ability to go and play in these places that we hold sacred, it ensures that relationship is still genuine,” he says. “Communities like my own haven’t had access to play. We’ve actively been removed from our lands and waters.”

That’s something Paul and Ríos to Rivers aim to shift. And their vehicle of change? The kayak. 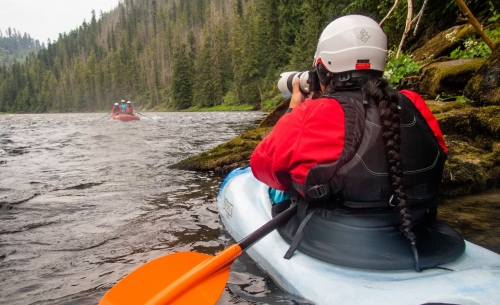 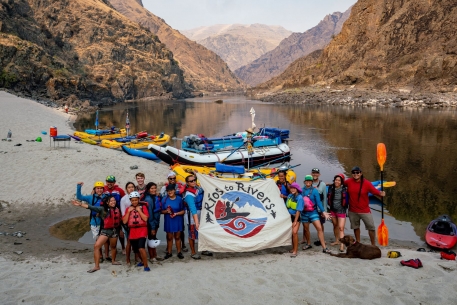 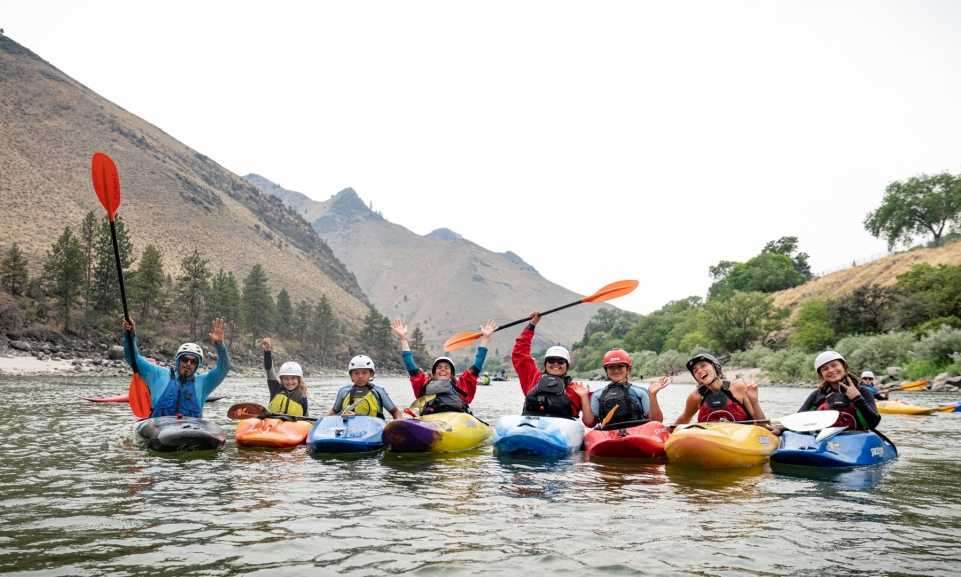 In 2022, Paul and his team launched a new project called Paddle Tribal Waters, a joint initiative between Ríos to Rivers and Maqlaqs Paddle, the kayak club Paul and his sister, Ashia Grae Wolf Wilson, started. Maqlaqs is the Klamath word for ‘people,’ and the club’s mission is to help break down barriers to paddling in their community.

Through treaty rights, Indigenous youth have legal access to vast traditional homelands and waters. Yet, it remains a challenge to help youth understand that they literally have access to those places and to educate them on the responsibilities that come with it. This is where Paddle Tribal Waters comes in. Paul and Ríos to Rivers are working with other partners, including NRS, Jackson Kayak, Werner Paddles, and World Class Kayak Academy, to bridge that gap by providing local youth with the tools and education to recreate on their home rivers safely and confidently, with the goal that they become guides and active stewards of those waters in the future.

“The one issue I’ve continued to run into within the whitewater industry and within nonprofit work is the lack of Indigenous representation within decision-makers and board members, and that’s really restrictive when it comes to the way that I’m able to program in Indian country,” Paul explained. “This was born out of that struggle.” 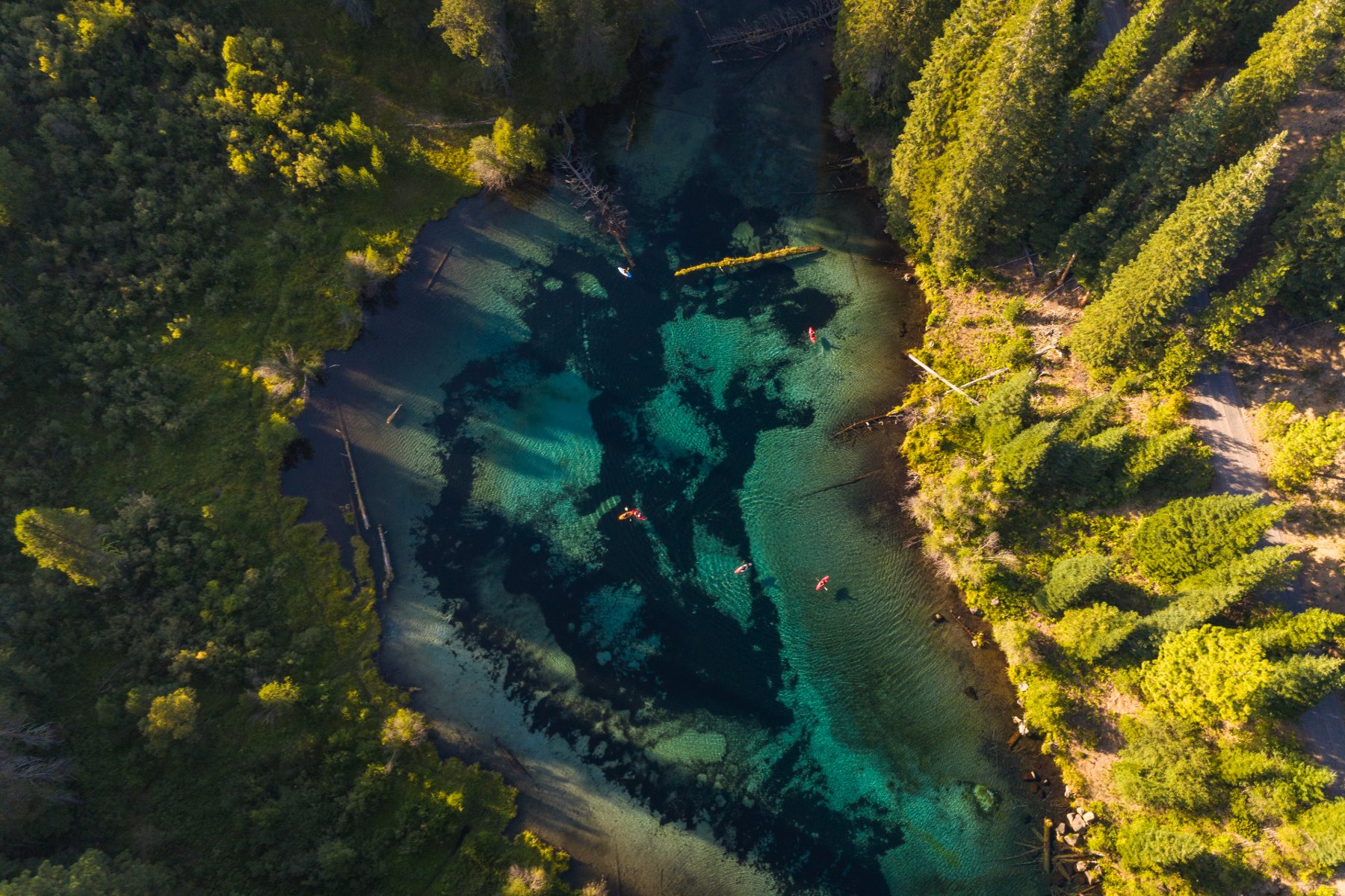 The Maqlaqs Paddle community completely drives Paddle Tribal Waters, which is exactly the kind of movement the team hopes to grow in the Klamath Basin and beyond. “There are people that understand what you’re going through. And there are people that are willing to stand in solidarity with you,” Paul said. “I can’t tell you how invaluable those kinds of conversations are with frontline communities of understanding and feeling that support and finding how to support them. It gives us a lot of power.”

Paul says that for tribal youth to be able to show off the beauty of their homelands and waters, to connect with others who understand the challenges they face, and to teach visitors about their rivers and cultures builds confidence and camaraderie that goes beyond state and country lines. It also opens opportunities for those kids to continue to forge community and solidarity in the face of increasing threats and pressures of climate change. And this camaraderie goes well beyond the students.

“Indigenous communities have such strong senses of community and so does the outdoor recreational space. You can watch any outdoor film and see all the kids lining up on the river as some celebrity paddler goes down,” Paul said. “How do we make sure those kids are able to have that same access? The in-depth relationship that Indigenous youth have with lands and waters is so beautiful. And I want to see that grown, I want to see that explored more.” 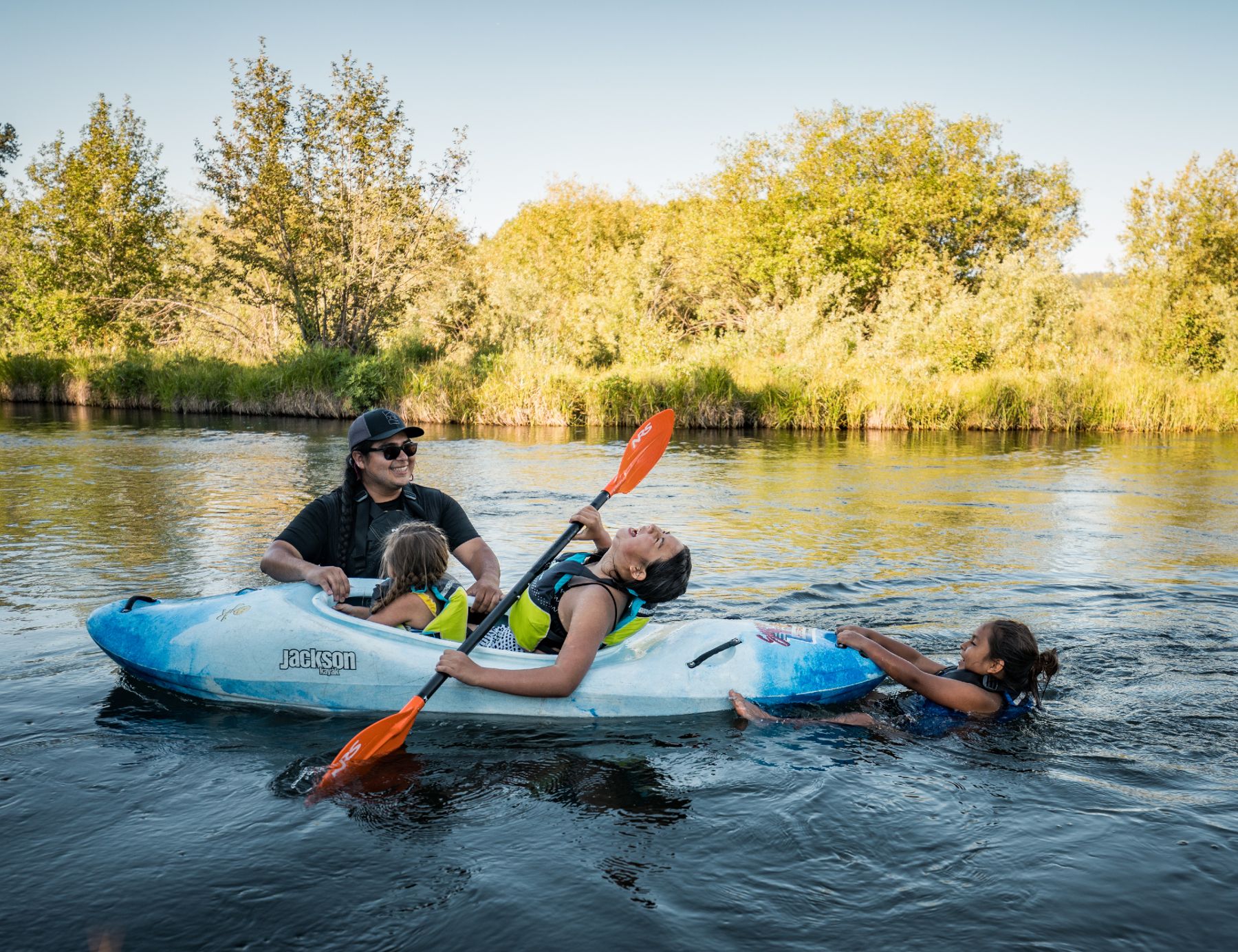 In 2021, Paul and a group of Indigenous youth from river basins across the Pacific Northwest spent a day on the White Salmon River paddling through the former Condit Dam site. On October 26, 2011, 700 pounds of dynamite blew Condit Dam to smithereens, and the White Salmon broke free for the first time in 100 years.

I was fortunate enough to be along for the ride that day back in 2011 and last summer with the Ríos to Rivers exchange. I shared a paddle raft with members of the Hoopa Valley Tribes, the Klamath Tribes, and the Miwok Tribe. Paul, wielding his camera and a constant smile, hopped from raft to kayak. The solidarity that Paul speaks of, and the power that comes with it, were infused into every paddle stroke, every laugh, and every high five as we splashed through the free-flowing river. To say that I felt that power in my time on that raft, with that crew, is an understatement.

Professional athletes, Tyler Bradt and Rush Sturges also joined the paddle as safety boaters, which only upped the ante. 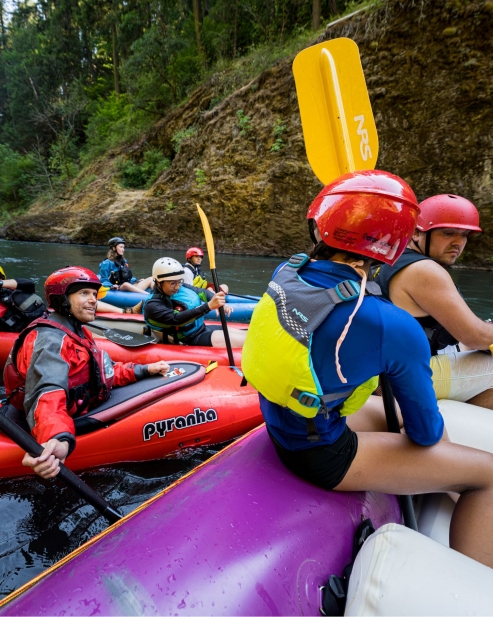 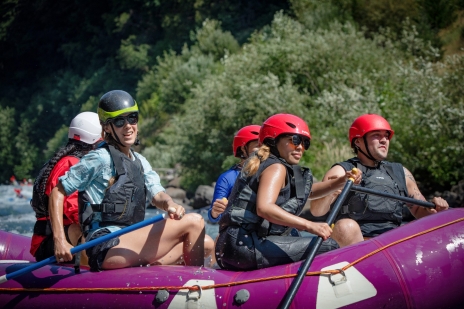 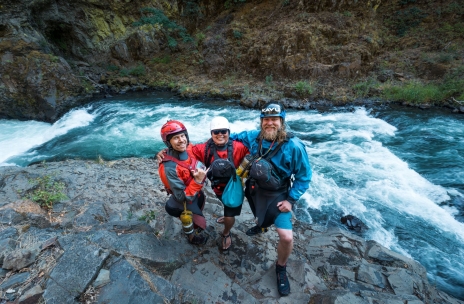 “Having those accomplished paddlers take time out of their lives to paddle with our kids, to have them invest that into the community and to see how fruitful that is, how fulfilling that is, was beautiful,” Paul recalled.

At some point during the day, Rush found out some of the kids were Hoopa, a tribe with traditional homelands and waters reaching throughout Northern California and the Trinity River Basin. “That’s where he comes from. That’s what he knows. That’s his river, you know? And so for him to be able to see that he can bring so much value to these kids through something that brings him joy, that was so beautiful.”

Paul and Rush already have their eye on something big: Organizing 16 Klamath youth to paddle the first descent down a newly freed Klamath River. If all goes as planned, the removal of four dams on the Klamath River will begin in early 2023, freeing 400 miles of the river. 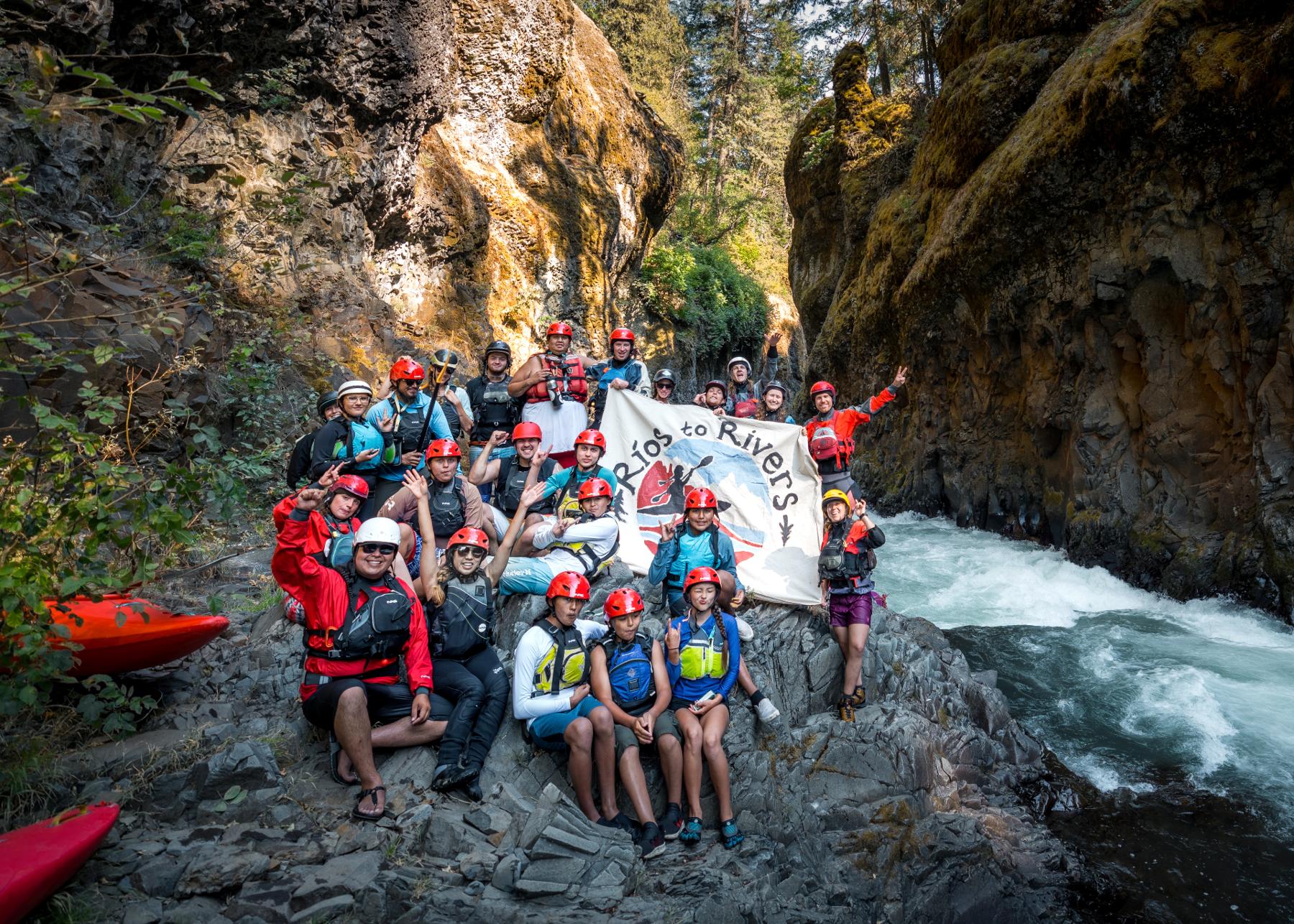 “This is a war that’s been fought for over 100 years. This is the largest dam removal in history and who better to have that focal point than Klamath tribal youth that are rekindling their relationships with this river in one of the most intimate ways possible—in a hard-shell kayak,” Paul said.

This isn’t work for Paul, it’s his purpose. He says he’s been fighting to free this river since before he was born, and his father before him. He beams and I can hear the smile in his voice as he talks about what it will feel like to paddle on a free-flowing Klamath with kids from his tribe.

“This is why we do it,” he said. “This river has taken care of us for tens and hundreds of thousands of years. We have this opportunity to renew the relationship with the river and the entire world’s going to see it.”

More than anything, Paul said it’s about giving those kids the moment, the opportunity to fully embody the joy of paddling on the river that generations of ancestors have fought to free. “Time is so precious, but if we forget to feel that joy, that celebration, that relationship that’s necessary to continue this work, then we lose what it’s about.” 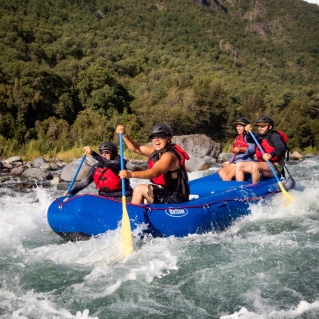 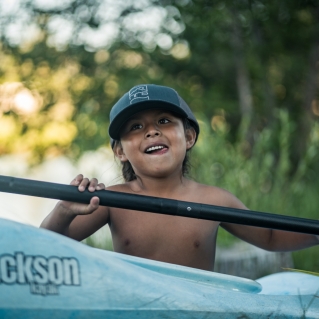 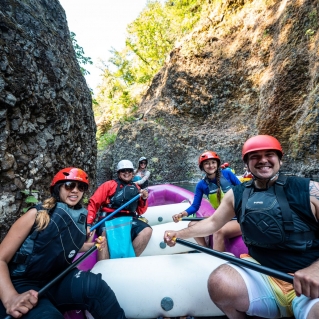 As Paul and his team keep their eye on 2023, he said his mornings on the Wood River bring him home in more ways than one, “It centers me. It reminds me that I’m here—and why I’m here.”

“That’s what I ask everybody to do. Just find any time today to go and interact with your river or creek, or whatever that looks for you. Go and find it and be present with it.”

Editor’s Note: Guest contributor Emily Nuchols is a writer, river advocate and the founder of Under Solen Media, a Portland, Oregon-based creative company with a cause. She has also been known to throw one hell of a party and wholeheartedly believes that celebration is at the core of great work—and that we can save the world one party at a time.

A shorter version of this profile first appeared in Kayak Session’s #82 Summer Issue.  The River Warriors series highlights paddlers who do more than paddle.