Community Kayak Schools on the Rivers of South Chile

Since the 1980s, the rivers of Chile have been known worldwide as a kayaking and rafting paradise. From long and scenic multiday rafting trips on the legendary Biobío River to the first descents that captivated renowned international athletes decades ago, our rivers have seen a growing number of people enjoying their torrential waters.

Amazed by these pristine streams that flow through extraordinarily wild landscapes, whitewater lovers from all over the world have traveled to Chile and built a supportive community that grows every day. However, despite the river festivals and tourism companies that have increased their presence on the rivers, it’s still a challenge to introduce local communities to this way of living and understanding nature through sports. 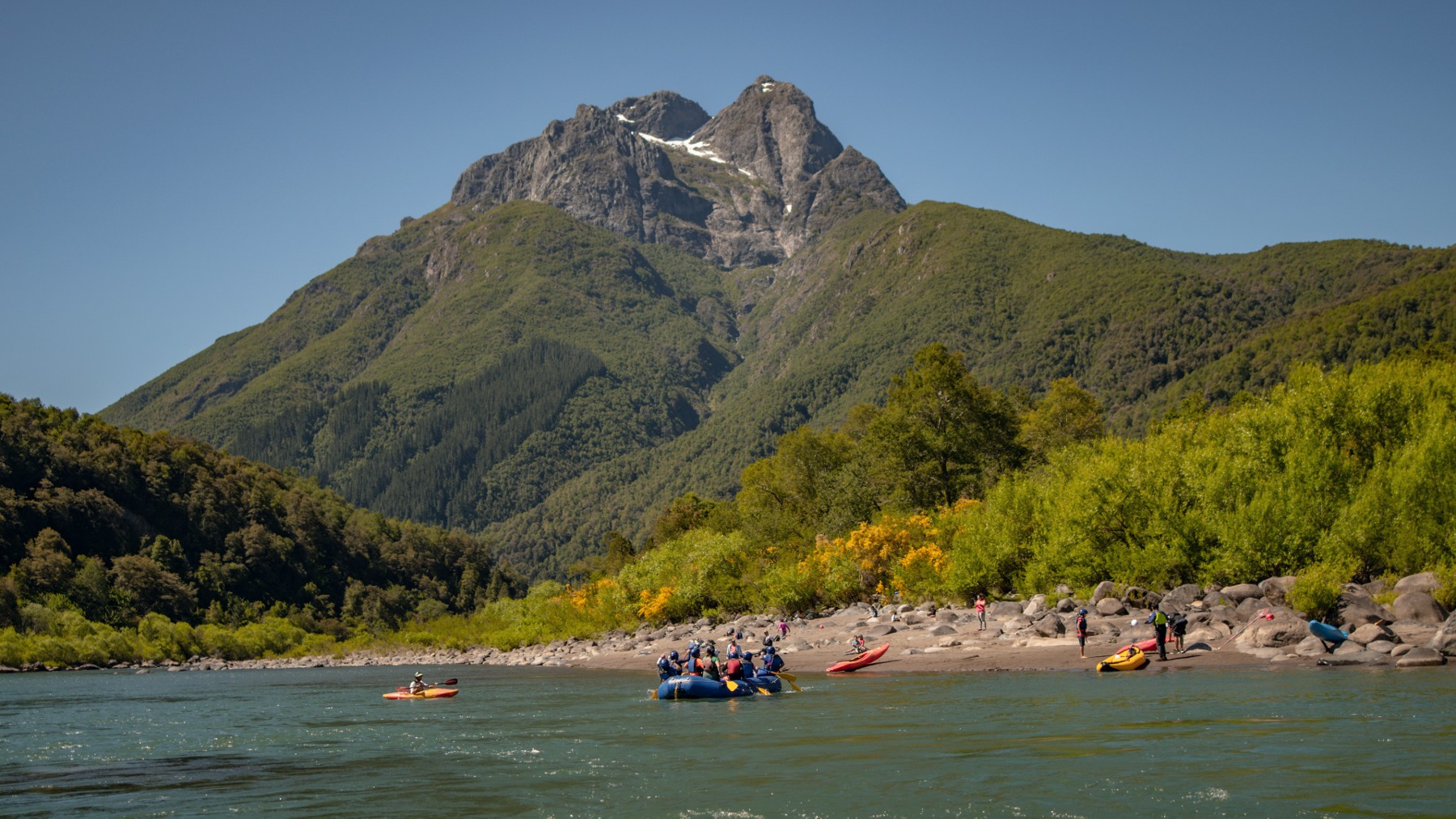 The captivating thing is that different initiatives have proliferated at the national level that seek to promote learning and contact with nature through outdoor schools. Bestias del Sur Salvaje (Beasts of the Wild South) on the Biobío River and Futaleufú Riverkeeper’s Chicas al Agua (Girls in the Water) are two organizations that create an opportunity for boys and girls to connect with their rivers. These kayaking and rafting schools promote psychomotor skills and strengthen the social fabric and knowledge of sports techniques in an environment surrounded by wild and exuberant nature.

These two projects have the same goal: Recognizing the importance of the historical and cultural knowledge possessed by local communities, who have lived by these rivers for generations. Traditional education has often distanced students from this knowledge, disconnecting them from their main source of it—nature. 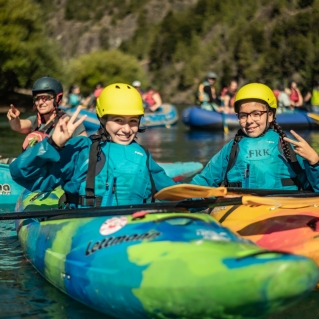 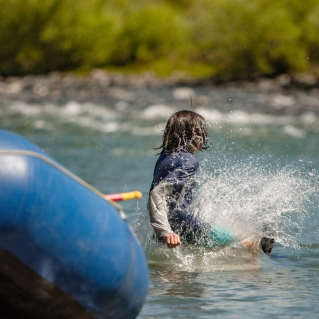 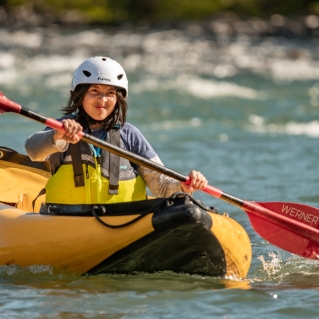 As Guillermo Purrán, member of the Callaqui Community at Alto Biobío, mentions, “This logic has been accompanied by institutions that for decades have implemented ‘adult-centric’ policies, which do not value the territorial and generational context to whom they are directed. We must consider children a fundamental part of a territory’s projected development.” Unfortunately, the pandemic has deepened this scenario in recent years. Virtual learning has limited the possibilities for young people to share with each other in an interactive learning space.

In this context, two initiatives were born. One on the Butaleubu (the native name for the Biobío River) and another on the Futaleufú River—both meaning ‘big river’ in Mapudungún. Both organizations built these initiatives based on creating a safe space for learning to kayak and connecting with the rivers and the nature of their riverbanks. As well as enhancing communication, decision-making and psychomotor skills, essential for personal, family and future professional development. In other words, as local boys and girls learn outdoor sports, the sport then connects them with their natural environment. 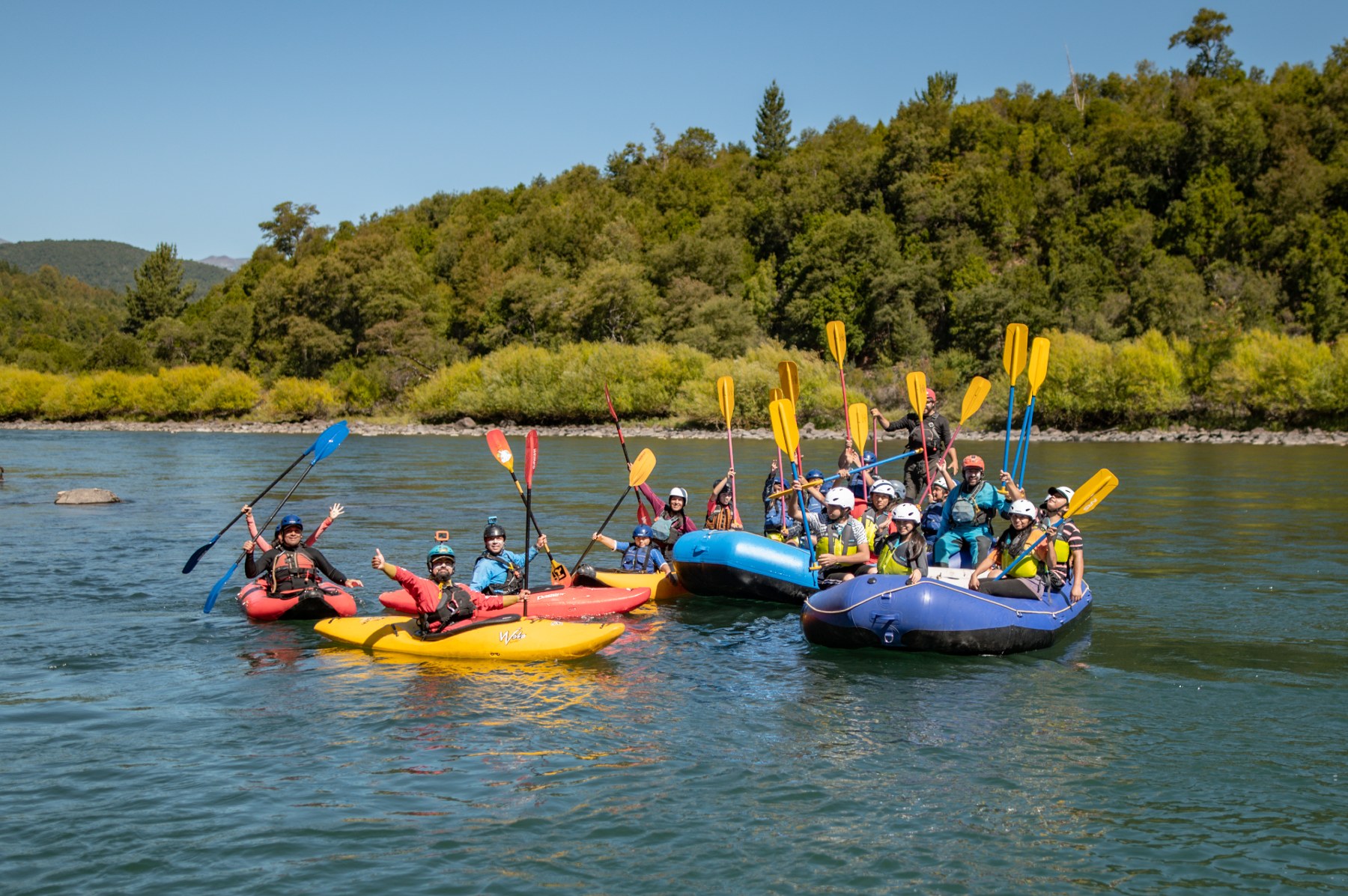 Paddling my Roots
A Pewenche initiative in Alto Biobío

This project happens on one of the few sandy beaches of Alto Biobío. Ever since the Ralco and Pangue dams were built, the river doesn’t deposit the sediment that once fed its banks. But on this remaining beach, with the imposing Rañilhueno in the background (also known as Cerro La Pepa) kids between the ages of 7 and 14 from the Pewenche community of Callaqui take their first kayaking lessons. For almost four months they enjoy the great Butaleubu. Each day, their confidence and enthusiasm grows, thanks to the dedication and motivation of their instructors and parents in this first session of the kayak school Paddling my Roots.

Since the beginning of the Bestias del Sur Salvaje organization, the dream of hosting a kayak school had circulated. It finally materialized for the first time with the Biobío Vive festival, a riverfest that sought to bring local youth and families closer to the river by connecting them with kayaking and rafting.

“Beyond professional kayakers, we focus on developing the ability to believe in themselves and in their peers,” says Paulo Urrutia Barceló, instructor and promoter of Paddling my Roots. “We see in this kayak school a collective and family space that strengthens trust, communication and teamwork, in direct relation with a river that has not only been forged in the Pewenche culture but is also a vein in the history of the Chilean society.” 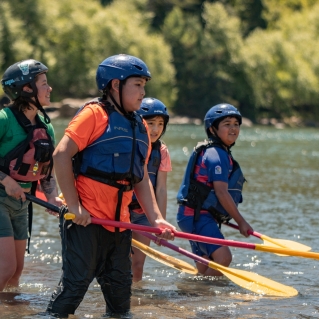 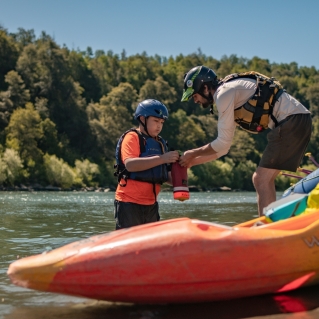 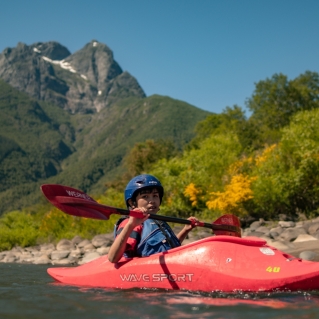 In this sense, this initiative has become a family space in which kids share kayaking and rafting days with their fathers and mothers. Each class is a refreshing and memorable opportunity to enjoy yourself. Classes involve sports activities, beach cleanups and environmental awareness as well as simple conversations reflecting on each student’s experience. Undoubtedly, the favorite moment of many—especially on hot days—is gearing up and practicing each of the skills necessary to flow through the currents. On the last day, the students descend the Biobío River.

Loreto Rubio, one of the mothers who participated reflected on how something like this had never happened in the community until now. “Children have had a different experience in the pandemic. Here they have an opportunity to interact, to learn and reinforce their personality to have self-confidence,” she said. The school has given Camilo, Loreto’s son, a chance to connect with nature and meet new friends. “Whenever I saw the kayaks go by, I would tell my mom that I dreamed of learning to kayak one day and now that has become a reality,” says Camilo. 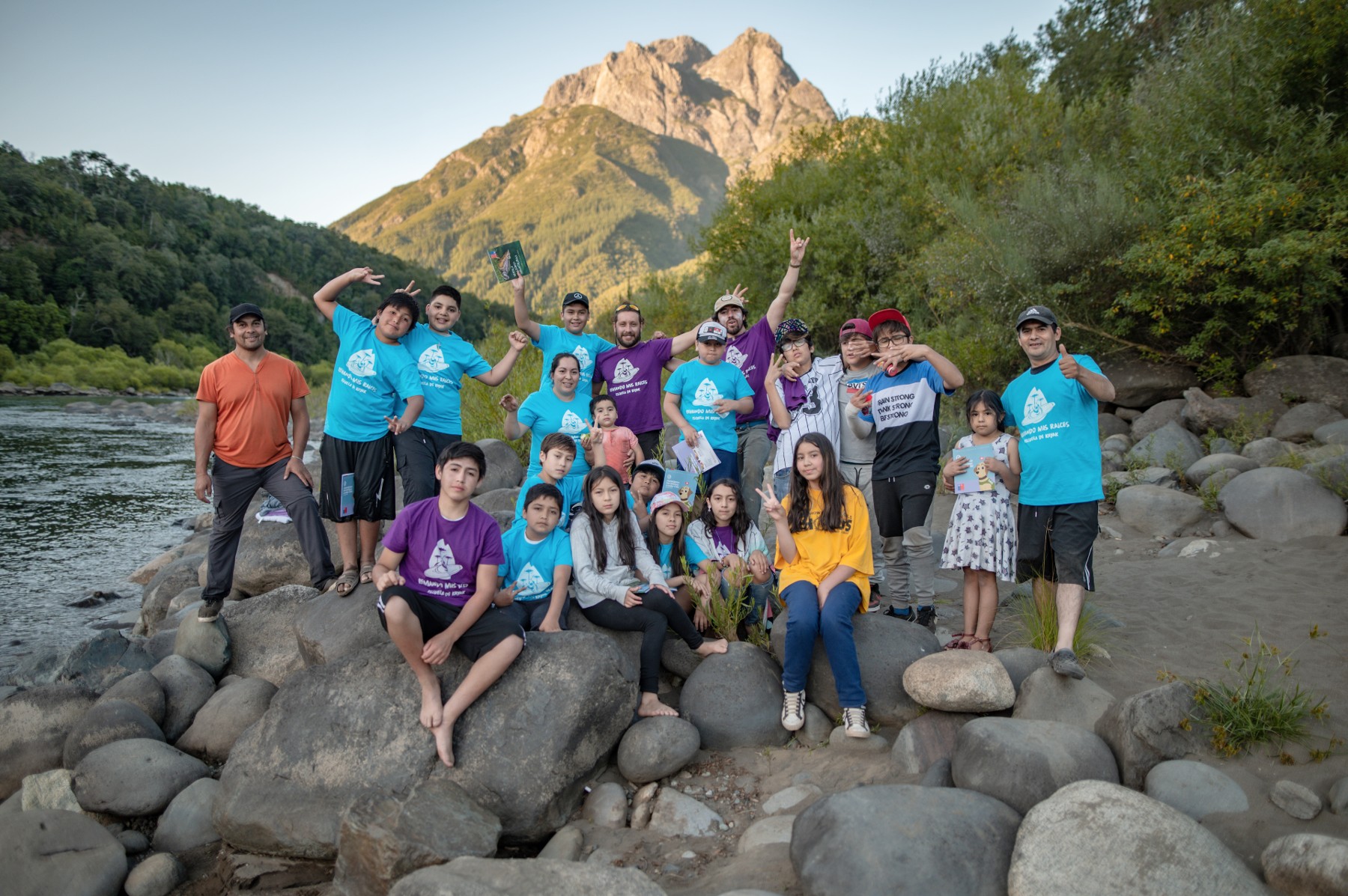 Girls in the Water
Empowering women through kayaking

In Futaleufú, the commitment has been to promote the female presence in kayaking. The Futaleufú River is internationally known for its pristine waters that captivate kayakers from all over the world. Every day more young locals convert this sport into a lifestyle. The initiative Chicas al Agua of the NGO Futaleufú Riverkeeper, gives local high-school-aged females the opportunity to enjoy the benefits of whitewater sports.

For Nancy Moore, one of the promoters, kayaking has had a notable influence on her process of building personal confidence and generating the self-knowledge that allows her to flourish as an empowered woman. That was one of the reasons that motivated her and her team to create a space for communion, which would give the young people of Futaleufú the opportunity to explore this same type of experience. 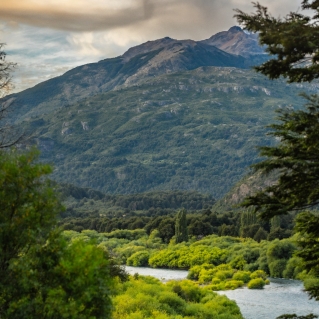 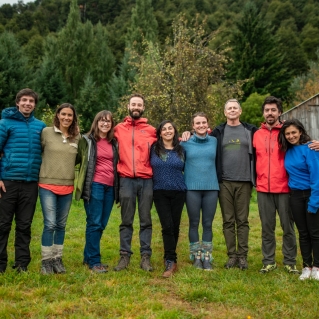 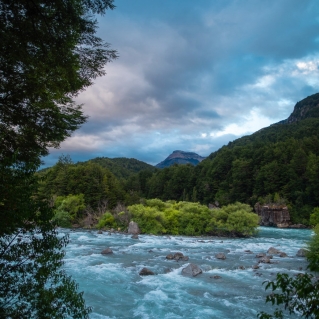 The success has been more than encouraging. Chicas al Agua began three years ago, and not only have they had 100% attendance each year, but also all the girls who have completed the intensive six-week course in the summer, have returned the following year to further hone their skills.

“It is important to highlight how significant this experience is for the participants, as we focus on an age when women go through difficult social, psychological and emotional periods hand in hand with all the physical changes they are experiencing,” explains Nancy. “For the same reason, we wanted to support them in their personal development, enhancing their self-esteem, and qualities such as leadership and teamwork, and to do that through kayaking, which would be a means rather than an end.”

In addition to empowering the students and giving them the skills of the sport, the program emphasizes environmental education and knowledge of the watershed ecology, to encourage the emotional bond with the territory and the appreciation of the immense wealth it possesses in terms of rivers, geology, and flora and fauna.

Rocío tells us how the program has also created a different closeness with the river, not only for the girls in the water, but also for their families. “At the end of each cycle, we always float on rafts with the families, mainly with the girls’ mothers, for whom this is almost always the first time they enter the river in this way,” she tells us.

In fact, because of how voluminous and torrential the rivers are, many of the people are afraid of the rivers in the area. The idea is to open the minds of not only the girls but also their entire family. “It is very nice to see the pride and admiration that families feel for their daughters, seeing them so capable of achieving a goal that requires not only physical strength but also mental strength,” Rocío emphasizes. 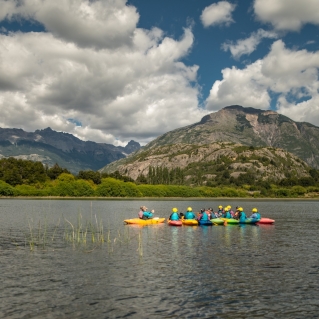 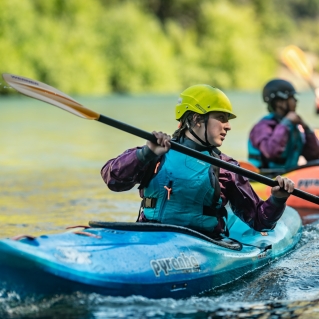 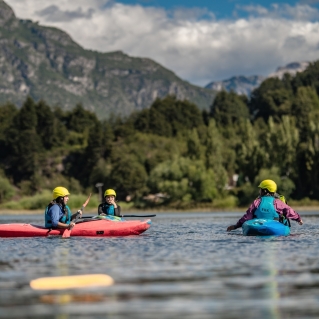 Kayak schools have become a unique opportunity in these rural territories. They create a space for personal development and personal challenge and a space to build a community and connect with some of the most pristine rivers on the planet. The promoters of these initiatives tell us that it has not been easy to make them float. But despite the logistical challenges, they’re determined to overcome the barriers and give continuity to the programs and thus contribute to training not only future generations of world-class kayakers but also the next environmental leaders capable of promoting the protection of Chile’s rivers.

Editor’s Note: Guest contributor Ana Vallejos is a bellydancer and writer, loyal to the pacific ocean, the forests and steep-sided wooded stream valleys of Algarrobo, Chile. Ana has been publishing nature-related articles since 2017 and has lately been deeply involved in the defense of the last native green headland of her homeland.