Finding Stoke on the West Fork

I hadn’t had customers fall out of my boat in three years, and here I was on the San Juan River outside of Pagosa Springs, Colorado with two heads bobbing down rocky, cold Class III water.

One of them swam back to the boat, and after shouting, “Get her in!” to no avail, I grabbed her PFD and pulled her back in with all my strength. The other swimmer was floating helplessly behind the raft. I reached out to grab his hand and just missed it. If only he had extended his paddle to me. He was quickly swept under the raft and downstream, eyes wide as dinner plates. 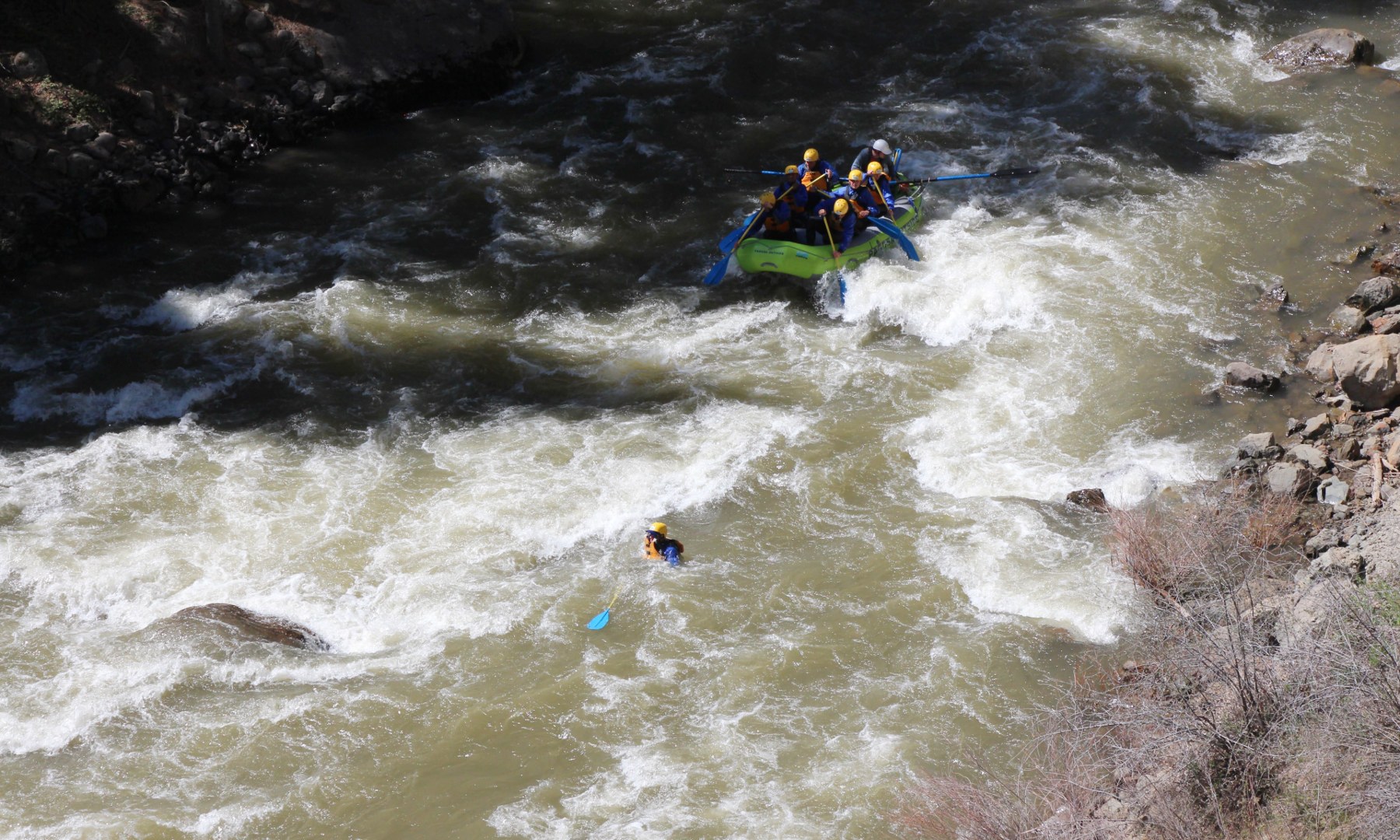 The guide in front of me was manically blowing his whistle and trying to direct his crew toward the swimmer. They finally heaved him out just before the rapid increased in intensity. He lay gasping at the bottom of the raft while the guide tried to straighten out and avoid further carnage.

Now no one was paddling in my raft. I seized the oars and narrowly avoided hitting a boulder that surely would have flipped us. We slurped and bumbled our way through the section, my paddle commands going unheeded. I might as well have been shouting at an empty raft.

We finally reached a section of calm water. I shipped the oars and put my head in my hands. I swore that as soon as the trip was over, I would quit. 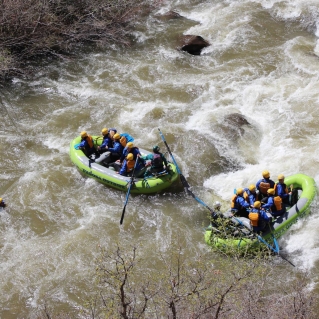 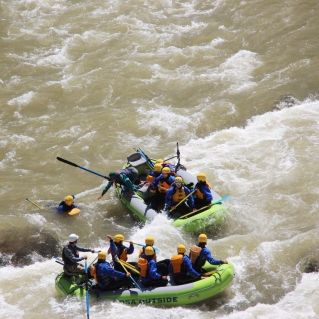 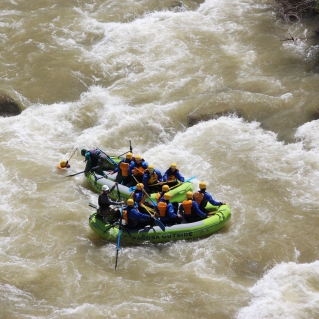 I wasn’t new to rafting. I’d been a guide on the Arkansas River for five summers. There I’d guided everything from the Cass II Family Float to the Class IV Numbers.

The notorious Numbers section, depending on the water level, requires guests to be over 16 and have prior rafting experience. People swam and flipped often. Every year, one or two fatalities occurred on Numbers. Guides in the Arkansas River Valley usually had at least three years of experience before attempting to guide that section.

Suffice to say, I wasn’t too shabby of a raft guide. I’d had two flips in five years over the course of thousands of commercial river miles. I was, if I may be so bold, one of the more senior guides at the company for which I worked. 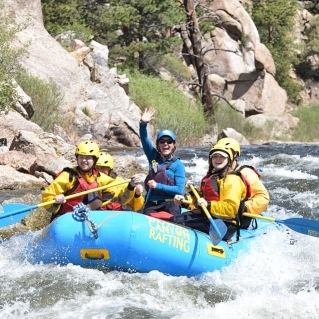 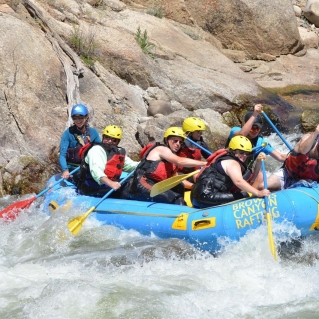 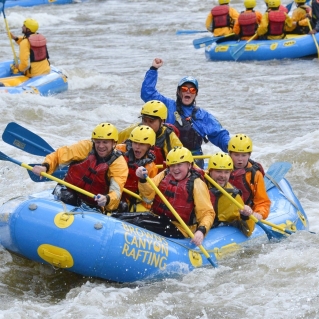 Yet I was sick of raft guiding. I felt too old to be doing the job anymore and completely done with the dirtbag lifestyle. I’d lived in the back of a truck for four summers, showering at the local fitness center and surviving off food left over from full-day trips. It sounds romantic and admittedly was incredibly fun while it lasted, but I was worn out.

I was getting, as we call it in the industry, “crusty.” I used to look forward to rafting season all winter. The best feeling in the world was showing up at our outpost and seeing all the friends I’d missed, a small pack of happy dogs running around the parking lot. I jumped on the opportunity to do after-trip laps on Numbers and was the first to organize full-moon floats down the Class III Browns Canyon.

After five years, I started to dread going to work every day. I would go mountain biking after trips and desert the outpost to camp alone. I grew tired of the constant talk of whitewater and the monotonous description of swims and flips. I thought if I had to load one more five-stack, give one more safety speech, I would lose it. 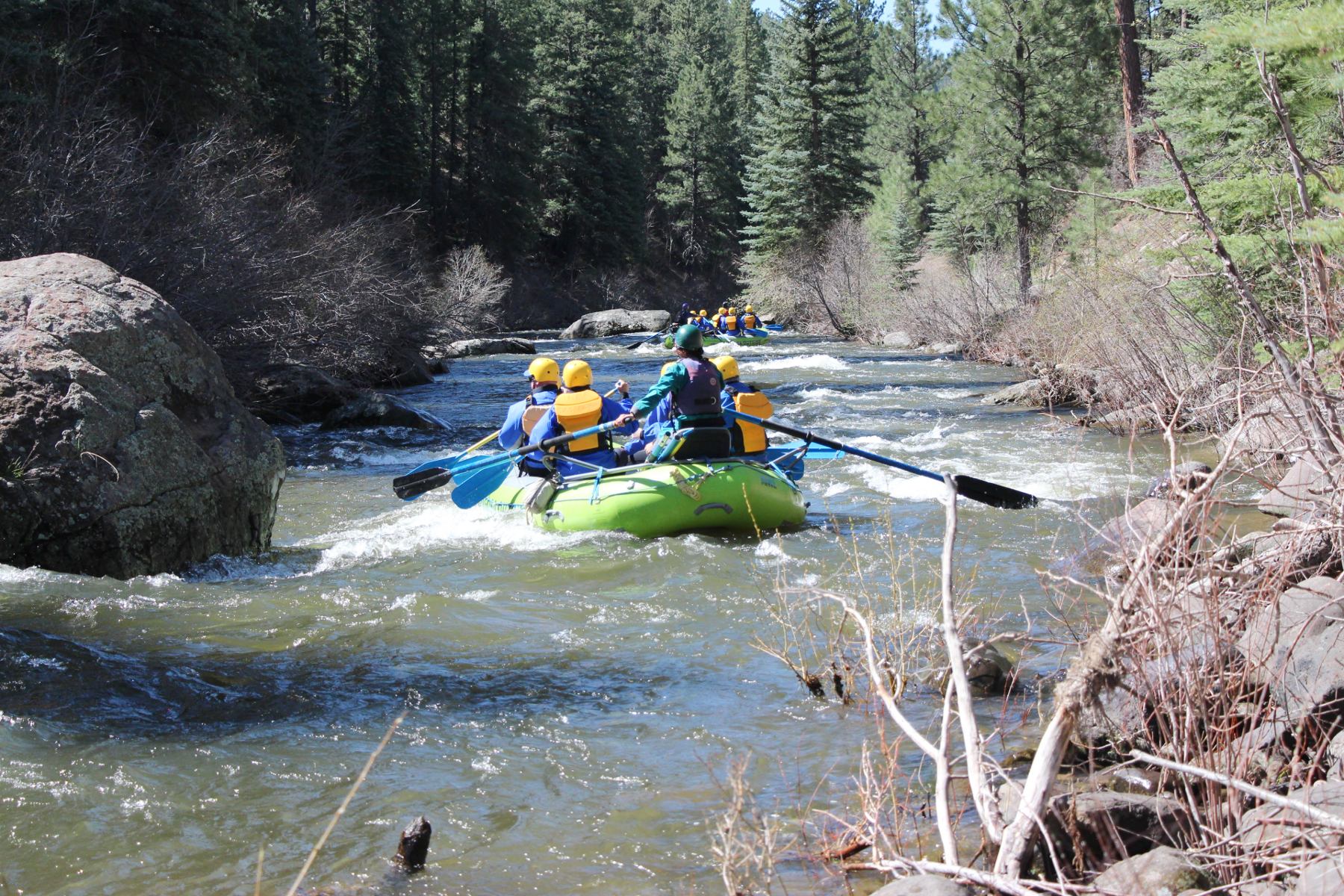 I also began suffering from severe cases of nerves. Even though I was as skilled and experienced as I’d ever been, I started shaking before each Numbers trip. Even Browns Canyon left me with a pit in my stomach, white-knuckling through rapids and taking the most conservative lines just to get the trip over with.

Yet here I was, again, blowing up a green boat with a pink electrical pump, preparing to take a bunch of out-of-shape tourists down whitewater they had no business being on.

I’d moved to Pagosa Springs to ski patrol at Wolf Creek Ski Area and liked the area so much that I decided to stick around. I also knew that deep down, I loved raft guiding and thought a new river would give me back the stoke I used to feel. 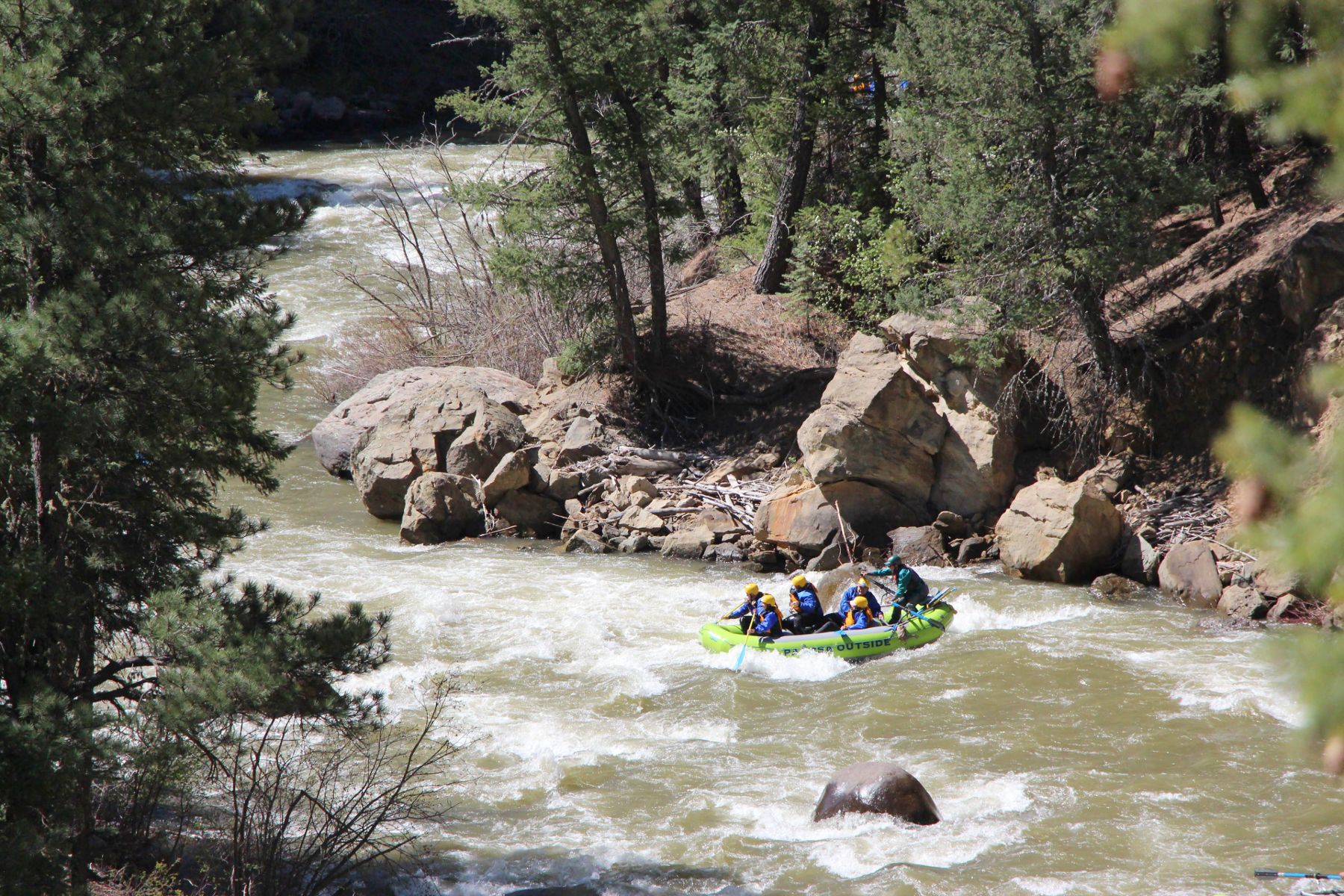 The San Juan River melts off the Continental Divide in southwest Colorado. The West Fork is the most difficult section of whitewater on the San Juan, considered Class III.

Yet it was entirely different than the Arkansas. It was much narrower and scrappier, to begin with. Rocks were sharp, the water frigid. The company I worked for customarily rowed the section on a stern frame with a group of up to six passengers paddling. I had been trained in paddle guiding almost exclusively.

Plus, the two rivers have completely different vibes. The San Juan is entirely snow-dependent; there are no reservoirs to ration the water throughout the summer. This makes the season incredibly short, usually just from May 1 to mid to end of June. On the contrary, I was usually guiding the Arkansas from the end of April through Labor Day.

I also felt the need to prove myself. I could walk around the Arkansas River Valley with a bit of a chip on my shoulder as one of only a handful of women that were checked off to guide the Numbers. Here, I was back at the bottom of the totem pole. While I had more years of experience than many of the other guides, they were used to rowing and knew the lines better than I did. 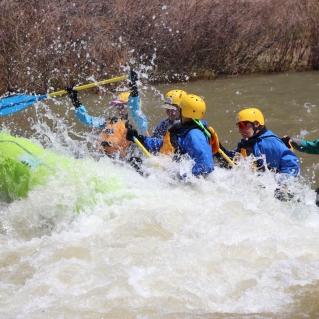 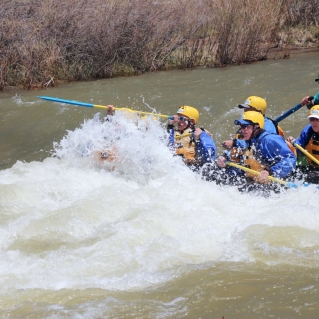 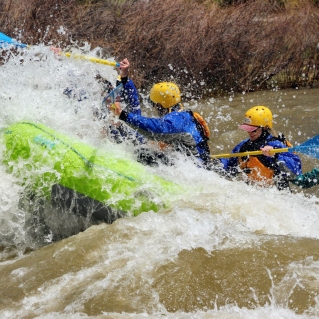 In addition, Pagosa Springs has two rafting companies. There were usually two boats per trip; once you started more than one van, things were getting wild.

On the Arkansas, we packed a couple of buses full of Texans and Midwesterners clad in red PFDs and yellow splash tops. Us guides often stood in the back due to lack of seats. We ran pods up to nine rafts in an area with over 20 unique companies, blue boats bumping against red bumping against yellow in a race to the takeout.

The company on the San Juan was the only one that had permission to access the West Fork. Since I was a (hair-toss) Numbers guide, I thought this section would be child’s play. 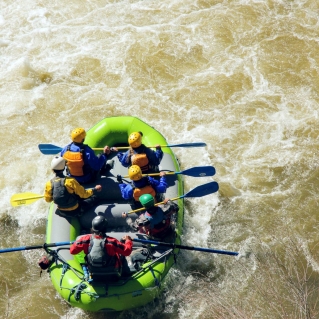 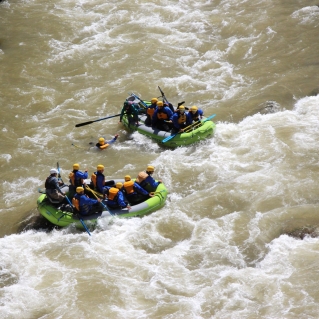 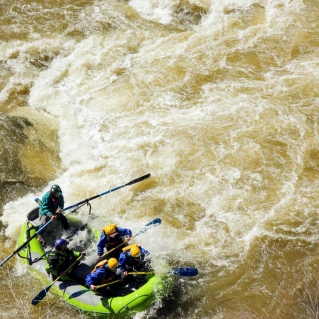 I came to find the West Fork was like boating Numbers at low water with faster current all while using a stern frame. The technique involved backing into eddies just to slow your pace. Once you started, there were few chances to eddy out for swimmers or another boat.

That fateful morning on the West Fork involved four rafts. The other three guides had years of experience on that particular section. Rowing rocky, 33-degree shallow water was a bit more natural for them. I, however, tried to keep the panic out of my voice while shouting paddle commands, I often got my oars stuck between rocks, and on a number of occasions punched the passenger right in front of me in the back of the head when my oar caught shore.

After the star-fishing swimmer was returned to my boat, the churning Class III section was mostly over with. It was then an eight-mile run out of lazy water before entering a series of man-made surf waves that went through downtown Pagosa Springs. 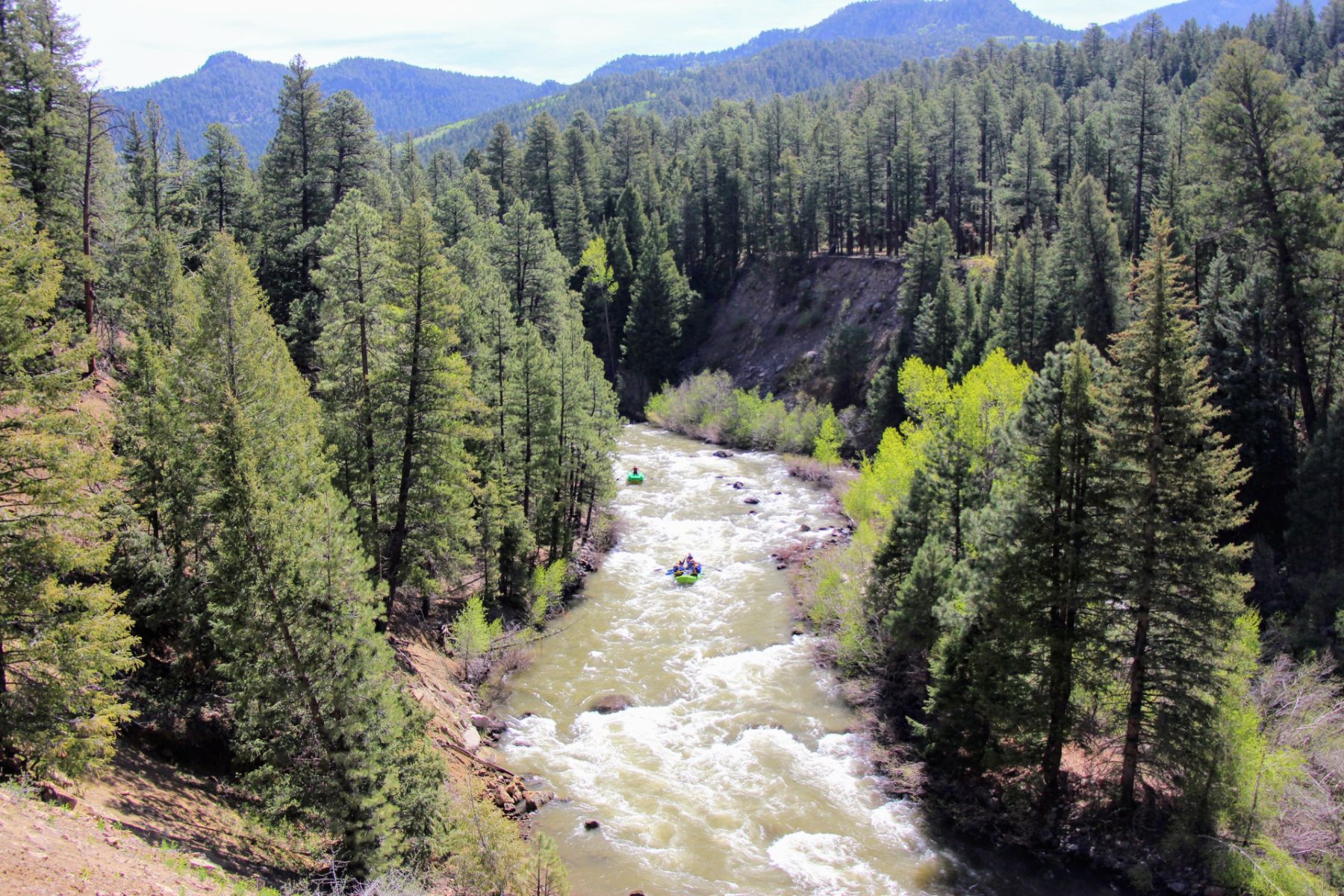 I tried to hide my tears through the runout, but I think the stuffy sniffles and congested sound of my voice gave me away. I tried to point out birds on shore to distract my passengers, but all the while I was thinking about how I was going to go about quitting.

We did a trip debrief, me sitting silently in the corner berating myself, my hat pulled low over my eyes. The guide who pulled my swimmer in blamed himself for getting stuck on a rock right in the middle of the channel. This had resulted in me smashing into his raft from behind and the eventual dumping of my passengers.

Our boss recommended a couple of days off from the West Fork. I took trips on the Class II Mesa Canyon and the Splash and Dash section through the town surf waves. I still wasn’t sure if I was going to quit or not. 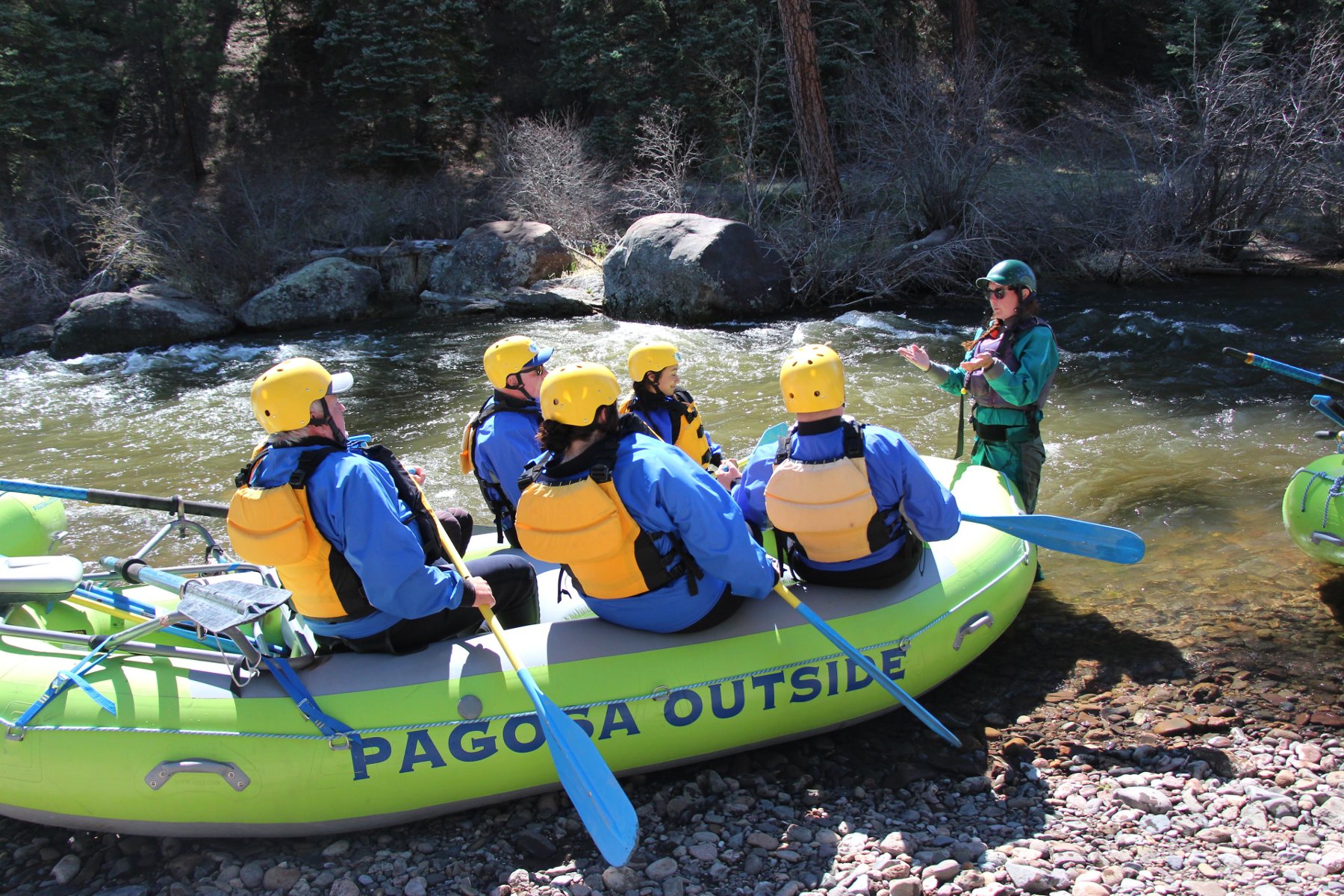 Three days later, I was back on the West Fork. The trip leader, an incredibly skilled guide named Iris, gave me a stout-looking crew of younger people. I gave my paddle talk, smiling and cracking jokes with my passengers while my heart raced and my hands sweated.

To my surprise, the crew executed every paddle command I called. We backed into eddies with ease, my oars feathered in and out of the water skillfully. We pulled off technical moves with style, the waves pushing us exactly where we needed to go.

I laughed and whooped as we crushed the last rapid of the West Fork. I gave all my passengers high fives and looked to Iris, who was smiling.

I shared celebratory drinks with my co-guides after the trip. Our boss shook his head, smiling, and said, “You got your juju back.”

I couldn’t wait to get back on the West Fork. Maybe I wouldn’t quit raft guiding after all.