There’s a river that runs south to northwest through the small country of Montenegro. Her azure blue water cuts a canyon so deep, only the Grand Canyon beats it. Springs feed her flow, and sparkling cascades tumble into her. Old growth beech trees lean over the clear water and sharp pines frame the graphite gray canyon rim which towers some 1300 meters above. Sandy beaches, pebble gravel bars, and vertical walls blend with the rumble of whitewater.

The Tara River is woven into Montenegrin culture and folk songs. Dusted with snow, scorched by the sun, or swollen with snowmelt, she has many moods. In every season and every mood, there’s a Montenegrin man who can be found near the Tara River: Miljko Bulajić. He has interlaced his life with the river since her beauty and power first seduced him as a high school student. Known as ‘Gigo’ to friends, he’s one of a handful of whitewater kayakers from Montenegro. For him, the Tara is both his sanctuary and his school.

The Tara lured Gigo out of the city and taught him about the natural riches of his home. And now, he’s giving back to his beloved Tara and the incredibly rich and healthy ecosystems of Montenegro, by protecting them, but also helping locals and visitors experience the nature of his home. 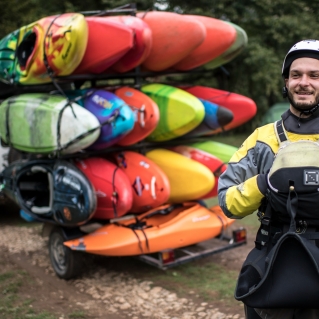 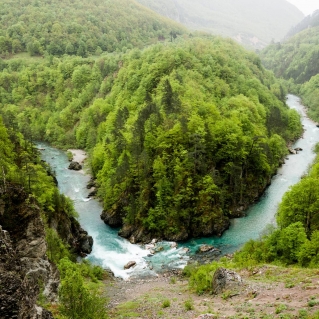 Montenegro, or Crna Gora in Montenegrin, means Black Mountain. The name is said to have derived from the dense evergreen forests that rim Mount Lovćen which overlooks the Adriatic Sea. The variety of landscapes in the small country is surprising, dominated by the arid Karst mountains, high plateaus, fertile valleys, pockets of thick forest and Mediterranean coastline.

The drainage system of the country flows in opposite directions, with the Piva, Tara, and Lim rivers flowing north into the Black Sea, and the Morača and Zeta rivers flowing south to the Adriatic. But almost 70% of the population, or just over half a million people, now live in urban areas, a migration perhaps driven by socialism when the country was part of former Yugoslavia. People’s connection with these life-giving waters and ecosystems has all but been lost.

Gigo was born in Yugoslavia. He grew up in the city of Nikšič, playing amongst the contrast of fourth-century stone buildings and socialist concrete apartment blocks. After learning what lay beyond the city limits, he asked his father to drive him to the Tara River, a 100-kilometer journey winding through the villages and mountains of Montenegro, to meet his schoolmate Dimitrije Vujanović, at his family’s riverside ethno camp and rafting company. Gigo’s first trip down the river sent his life in a river-focused trajectory.

“The moment I felt the first wave hit me, was the moment I said to myself, this is the life for me.” When he returned home in the fall of 2005 for high school, he made a goal to grow strong and fit. The following summer, 16-year-old Gigo became a raft guide on the Tara, a job he would hold for 12 seasons. But it would take him six seasons guiding before he got into a kayak. With very few (to no) mentors, learning to kayak was a learn-as-you-go experience.

“I always wanted to be on the river and to try something new. So, I took a kayak, started at Kamp Grab on the Tara, and with nobody to show me what to do or how to behave, I just followed a raft trip.” Gigo quickly learned how important it is to ensure the skirt’s grab loop is accessible. He flipped, smacked his head on a rock, and forced himself out of the boat. “But I was used to swimming in the river, so it was ok. I just got back in and tried again.”

Gigo worked on the Tara River as a commercial raft guide when tourism was just taking off. Today, the river is intrinsically tied to a still growing eco-tourism industry in Montenegro. Something which the small country—not much larger than the state of Hawaii by area (5,333 square miles)—is still learning to manage. As the industry grew, the raft guide’s life started to lose its luster, not because of the fast-pace or long days, but because he changed. 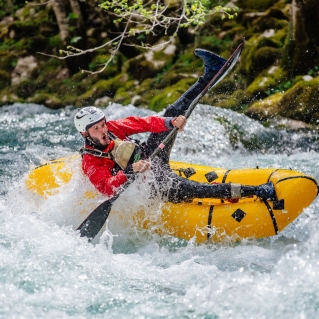 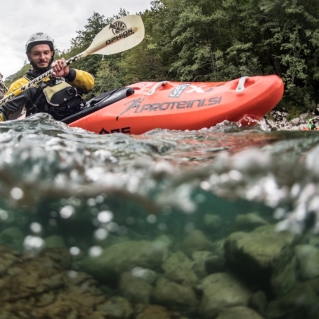 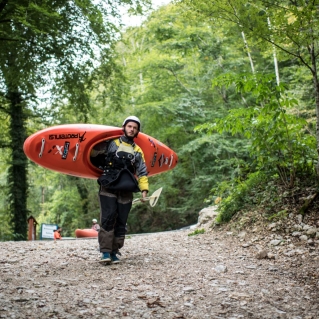 “The experience on the river changed; it’s an attraction now, not a passion, like it was when I started. People just come for a one-day adventure and for me it’s completely different.” But learning to kayak helped refresh that connection with the river.

“Kayaking gives you more freedom than a raft,” explains Gigo. “For me it was important to be alone, without tourists, and then I felt that freedom on the river again.” Kayaking refreshed his approach to being on the water. It also opened the door to a new type of freedom: travel. Since learning to kayak, Gigo has paddled in Albania, Austria, Croatia, India, Italy, Slovenia and the United Arab Emirates, often with his best mate Dimitrije.

But back home Gigo became frustrated with how decision makers and politicians perceived (and still perceive) rivers as a resource to harvest profit. “It hurts me to see that the government doesn’t care about the ecological state of the country,” he says. “I felt it was my obligation to do something.” 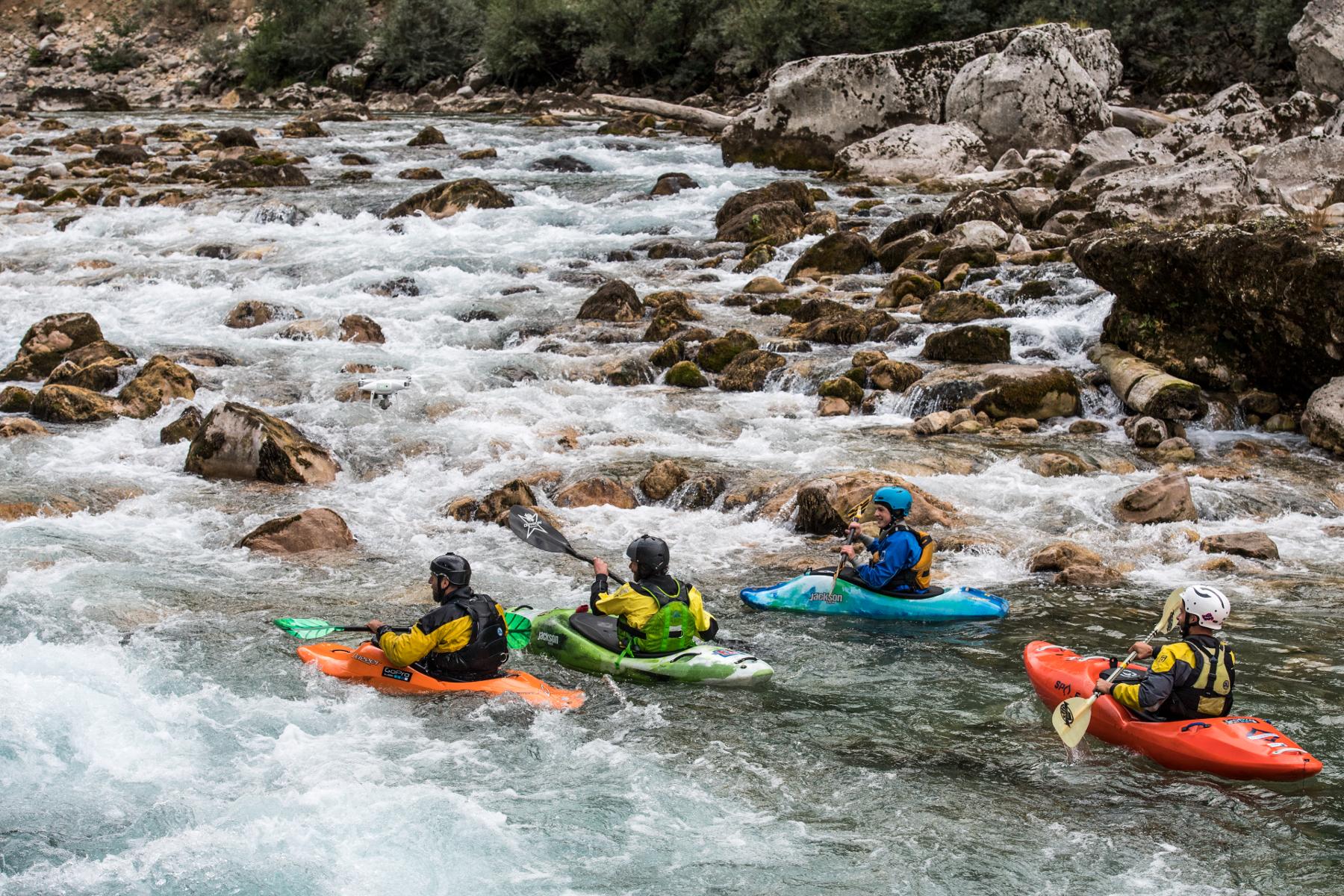 “I started studying philosophy in Nikšič, and I realized I didn’t know my country very well,” he says. “So, I started going on trips with school mates, and I said to myself ‘I’m going to try and show our country to as many people as I can,’ with the main goal of protecting nature and showing our beauty to the locals.” That prompted him to open his own NGO, Nature Lovers Montenegro.

“I realized that if I could help educate people, then maybe I could change the system. I think my role in this small country is to give an example of how we should behave and save the nature and the beauty we have.” Many locals still see rivers as hazards, not playgrounds. “Maybe that is part of the challenge of nature conservation, people fear what they don’t know.”

“There’s a kayak club in Podgorica and in the 60s and 70s there were lots of kayakers, but after the wars the interest stopped. There was a lack of instruction and gear and the country was separated, in the 90s everyone was fighting.”

The most natural way to get people outside is to give them incentives, skills and equipment. So, in addition to offering guided tours of the rivers and mountains of Montenegro, Gigo and Nature Lovers organized the first ever kayaking festival in the Balkans. Kayak Fest Tara is in its seventh year, and it hasn’t lost any of its soul or roots. To pass on the freedom the river gave Gigo, he made sure the focus of Kayak Fest Tara is to build a community and promote kayaking as a sport and share the beautiful, pristine rivers of the country with locals and international paddlers. 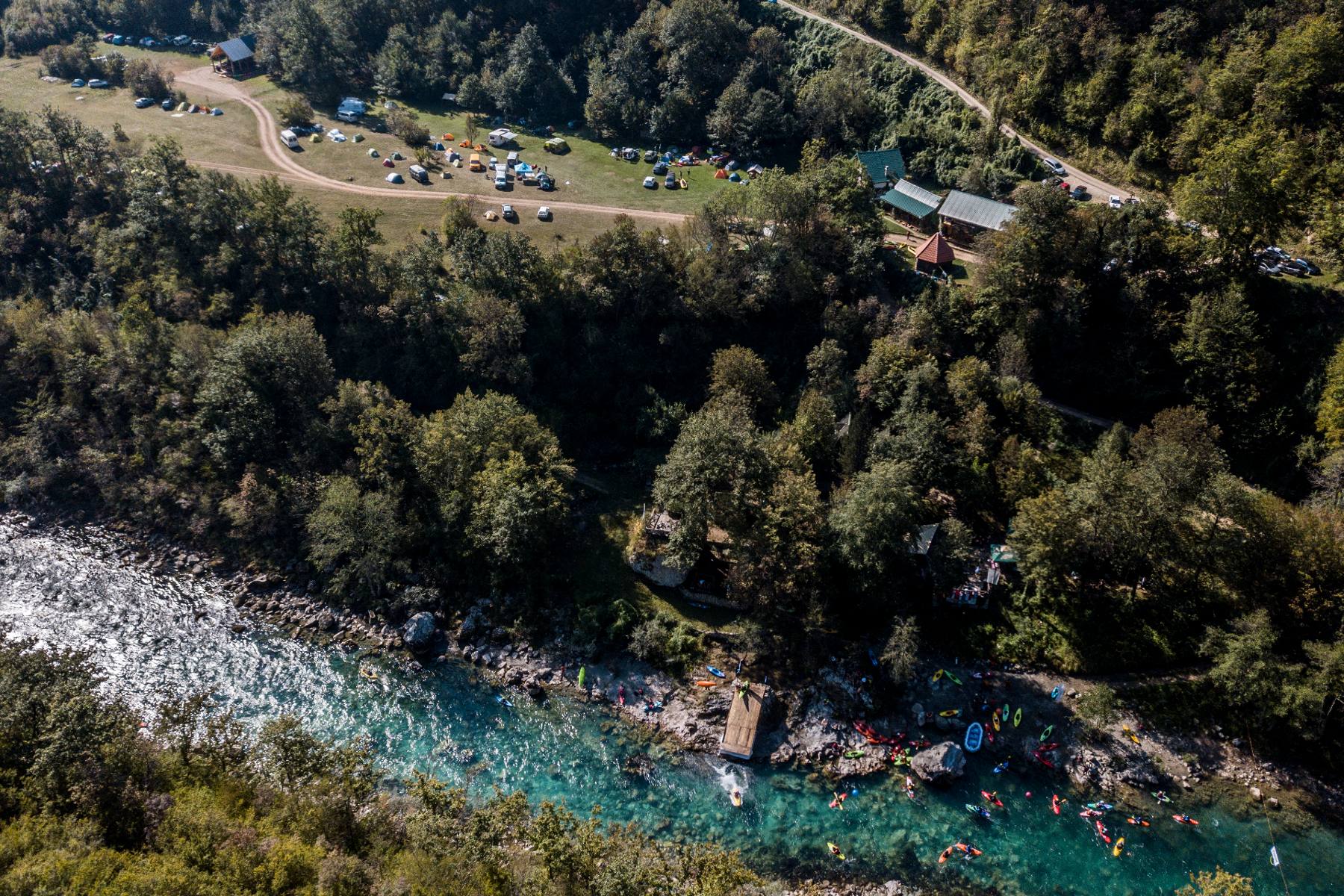 Gigo ensures the festival cost stay low so locals can afford to attend, and the package includes home-cooked traditional food, camping, kayak shuttles, entry into the downriver race and kayaking competition, kayaking skill and safety courses, live music and a party. Racing takes place on a stretch of class II whitewater, making it a perfect race for new paddlers. And they designed beginner sessions specifically for people who have never sat in a kayak.

The event has helped draw awareness about the Tara, but like all rivers, she is never truly safe. Even under UNESCO protection, plans to dam and flood the canyon have been on the table since 2004 with public protests, petitions and scientific studies and Gigo’s event slowing progress.

After noticing the pattern of dumping garbage in the upper Tara, specifically old tires, Gigo turned another idea into reality and the first Eco-Run was paired with Tara Fest 2019, which offered participants a free raft or kayak trip down the upper Tara from the town of Žabljak to Camp Grab, which usually requires a 50-euro ticket from Durmitor National Park. The focus was on removing as much garbage as possible. In the first year, they collected an entire raft full of garbage bags and more than 20 car tires. 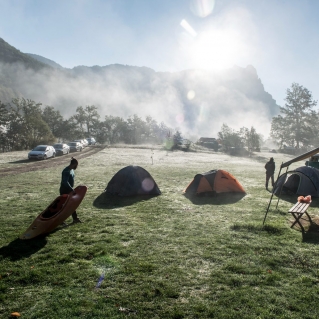 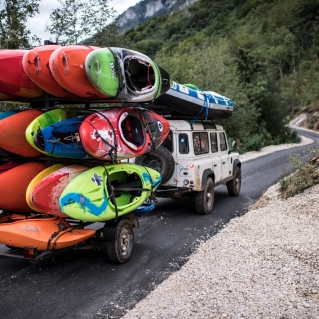 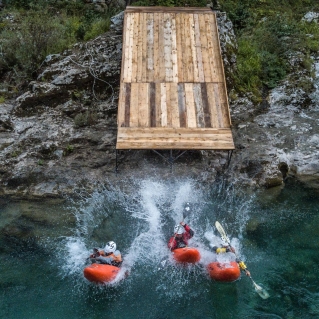 With the success of Kayak Fest Tara, Gigo applied the same tactic to ski touring and since 2018 Gigo has organized Ski Tour Fest, using the same concept: entice foreigners to visit and show locals the value of these wild places. But also inspiring locals to get out, encouraging gear exchanges and more than anything sharing knowledge and stoke. Gigo is not only building river lovers and nature lovers, he’s giving locals the skills, tools and confidence to explore on their own. To get out of the city and get to know their country. He is doing his best to reteach his nation about the incredible nature they have but have forgotten because of life in the city.

As free-flowing rivers become more and more scarce, no river is deemed too small. Or too inaccessible. Gigo and Nature Lovers recently jumped into action to protect the Komarnica River in northern Montenegro. The revival of an old Yugoslavian hydro project threatens the river again. The plans involve a 171-meter-tall dam, which would cost the Montenegrin government 350 million. Yet Montenegro would see only 3.5% of the electricity; the government would sell the rest to Serbia via concessions.

With just two weeks’ notice, the event gathered over 250 people including 20 kayakers, scientists, locals, international media, and the Montenegrin Prime Minister. People from all over the country came to support the river.

“I think we did a really good job of getting people familiar with Komarnica. Our strategy was to bring the people there and send the message from there.” If they can list the canyon as a UNESCO site, the classification would save the river—for now. “People are starting to understand we are lucky to have nature, and if UNESCO backs this feeling, we can ride that wave for a long time.”

When asked what would help the fight for rivers of Montenegro, Gigo’s answer is simple. “Come and paddle them! Especially some of the class 2-3 rivers.” People sometimes avoid more mellow rivers, but he insists the clear water and surroundings make for incredible multidays. Gigo is now a father of two, and it’s these kinds of trips that allow him to pass on his passion. 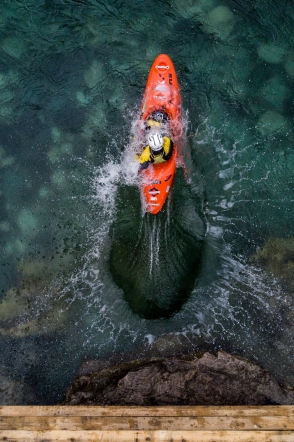 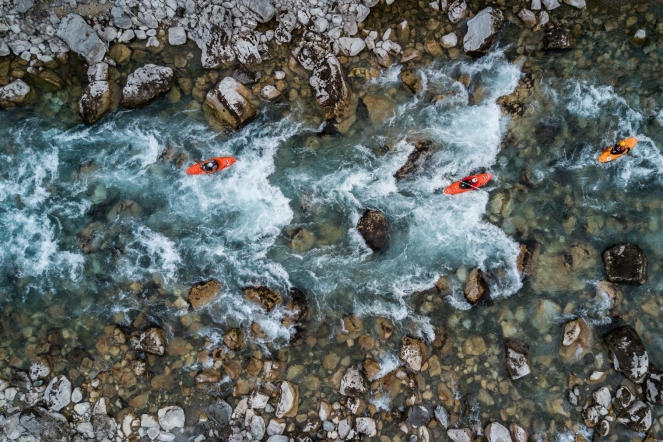 “When I started paddling, there were only three whitewater kayakers in Montenegro and now there are about 25. I wish there were more, but I think we have been successful so far.”

Using outdoor sports to reignite love and respect for nature isn’t an easy task. “I always did everything from my heart, and organizing these events is stressful but I always go back to the fact that I’m doing it from my heart,” he says. “For some kayakers, rivers are just an attraction, for me, they are much more. A river is a river with or without a kayak. And we must protect them.”

Editor’s Note: A shorter version of this profile first appeared in Kayak Session’s #83 Fall Issue.  The River Warriors series highlights paddlers who do more than paddle. All photos courtesy of