Lessons from Solo-Mom’ing It Through Hells Canyon

Every summer, my husband Nick teaches kids to kayak in Cascade, Idaho. We park our trailer there and I work remotely, homeschool our kids and paddle daily. Cascade is the epicenter to a dozen sections of famous multi-day rafting trips: the Grande Rhonde, Snake River and Salmon River just to name a few. Over the years we’ve created an incredible tribe of family paddlers who are always pinging me with permit draws and dates for river trips. If the date works for the whole family, we’re always in.

This spring, the Burnham Family drew a coveted Hells Canyon permit. Hells Canyon is the deepest canyon in North America and this trip would potentially be my longest raft-supported trip with the kids, six nights and seven days. But Nick would be teaching a kid’s kayaking camp that week. 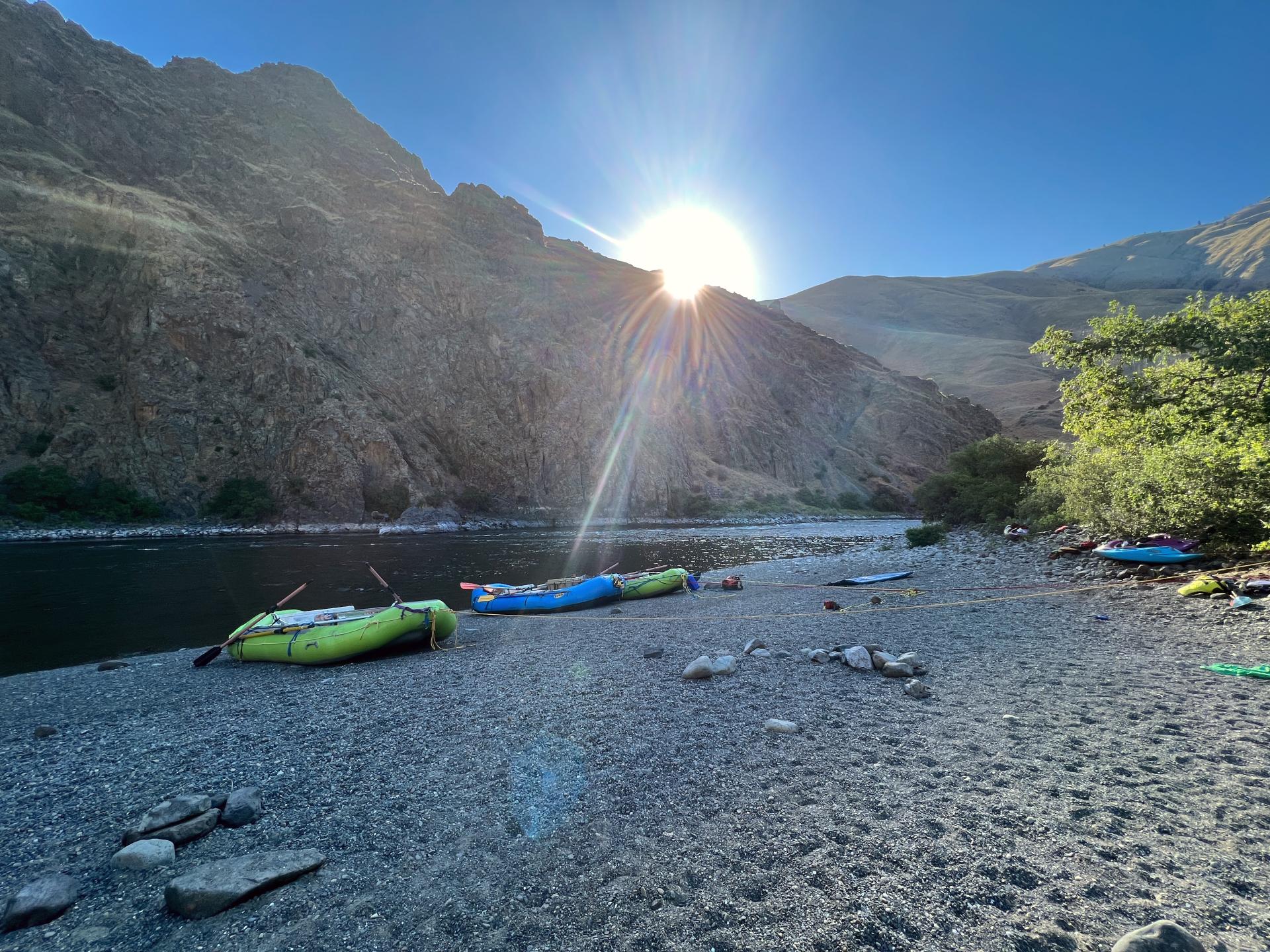 I grew up in an RV. You’d think I would be a pro camper but honestly, it’s quite the opposite. I have almost no tent camping experience. In fact, when Nick and I started dating, the number of times I had slept in a tent was so little, he would take me camping for anniversaries because it would be more special in his eyes—and I needed practice.

So, it’s no surprise that it never really occurred to me to solo-mom-it down the Snake River. I regretfully declined the Burnham’s invite.

Weeks later I got a text. “We know you said no, but we decided it was best if we drove to where Nick is teaching, hang out with you for a day, drove you to the put-in, then drove you back to Nick after the trip…”

I laughed at my friends’ blunt efforts to eliminate any inconveniences or excuses and encourage me to say yes. So, I obliged with a little hesitation but mostly excitement. 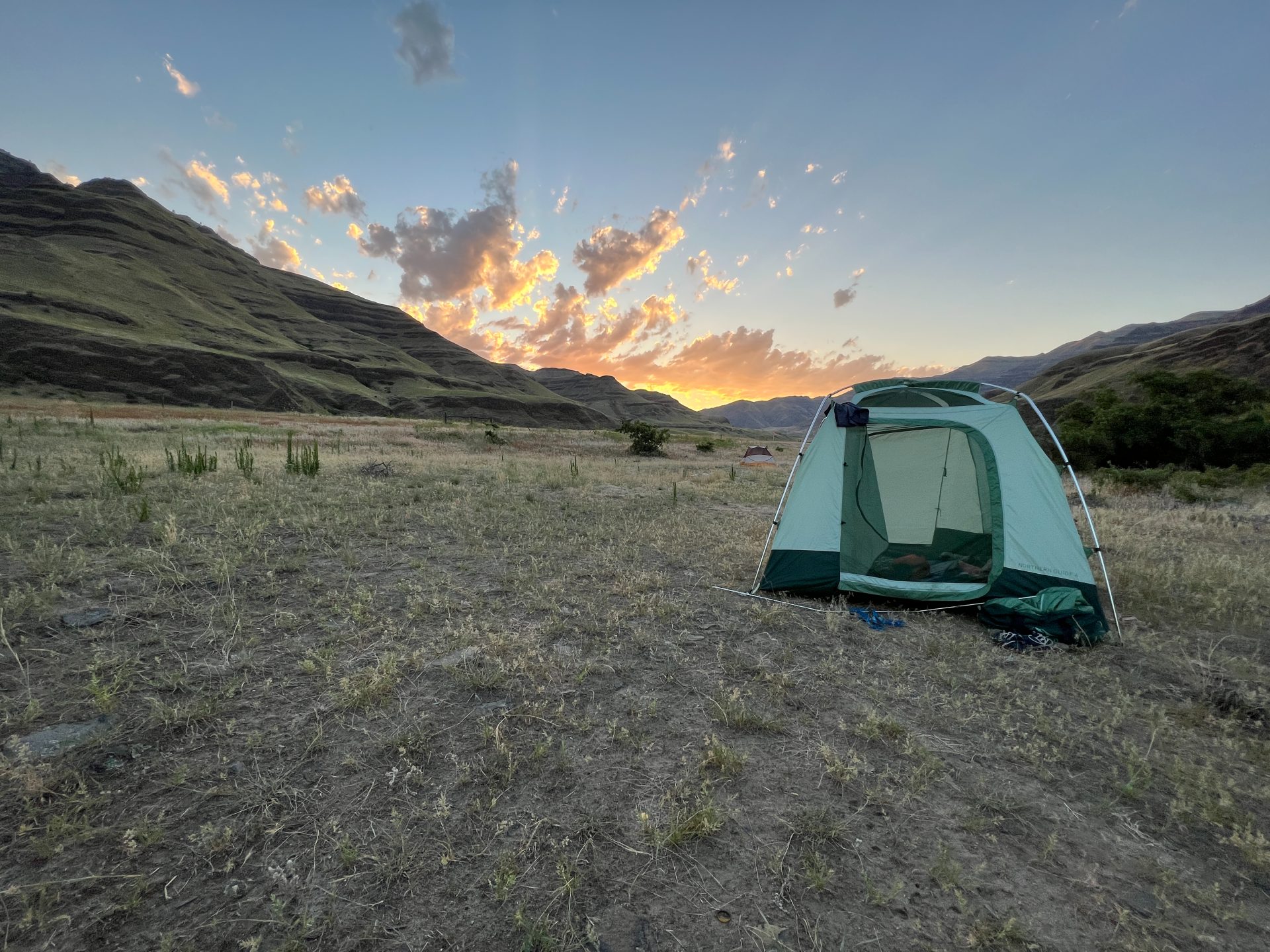 I had prepared nothing come the week of the trip. In fact, the day before my pick-up the only thing I had successfully done was to have bought Ziploc bags for snacks, but I hadn’t packed the snacks. I was really going to have to hustle to pull this off. I started packing early the next morning. By mid-day, I had two large drybags stuffed to capacity. When my friend stopped by to check on me before going for a paddle, it only took one look to realize my mistake. I needed to get our gear down to one giant dry bag.

Mid-trip, the anxiety of over-packing to eliminate forgetting something led to my first lesson: You can never pack it all. Instead, mentally prepare for the things you’ll physically forget.

I tried to be prepared for every scenario. But you can never be 100% prepared—especially given only one bag. If you have your basics down, everything else can be improvised. As a parent, it’s important to prepare for how you react to scenarios where the kids are accustomed to instant gratification. For example, on the second day, Parker was upset I didn’t bring a certain toy for her and her friends to play with. Instead of saying it didn’t fit or making an excuse, I apologized and told her I did the best that I could, and I just couldn’t make it work. Recognizing that I wasn’t intentionally trying to keep her from something, she immediately said,” It’s okay, Mom,” and went back to making houses with rocks. 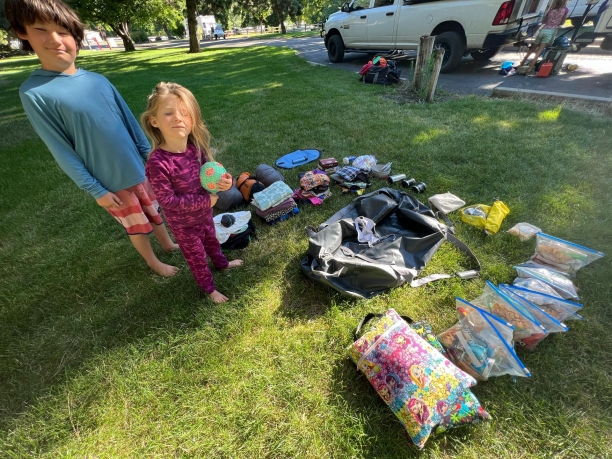 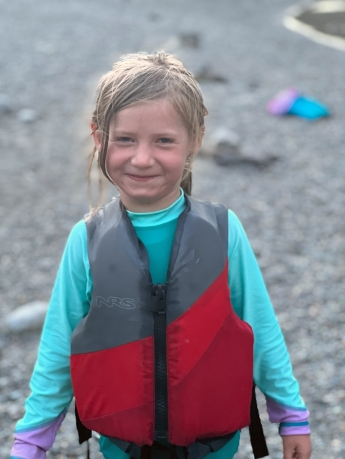 The night before the trip we camped at a campground 30 minutes from the put-in. Lesson number 1.5—when you’re river tripping with kiddos, take advantage of every last ‘real’ toilet.

As I set our tent up in exhaustion it hit me: I was on my own. Not having Nick with us was sad as we knew how much he would enjoy the trip, but I also thought of all the things he usually does for us and now I would have to do all the things I normally do and all the things Nick does.

The next morning, under a 90-degree sun we finally pushed off into the Snake.

We kept it simple that first day, letting the littles—and the solo mom—ease into the multiday routine.  We ran through some punchy rapids, we caught some fish and we saw baby bears and Mama bears playing in the river. 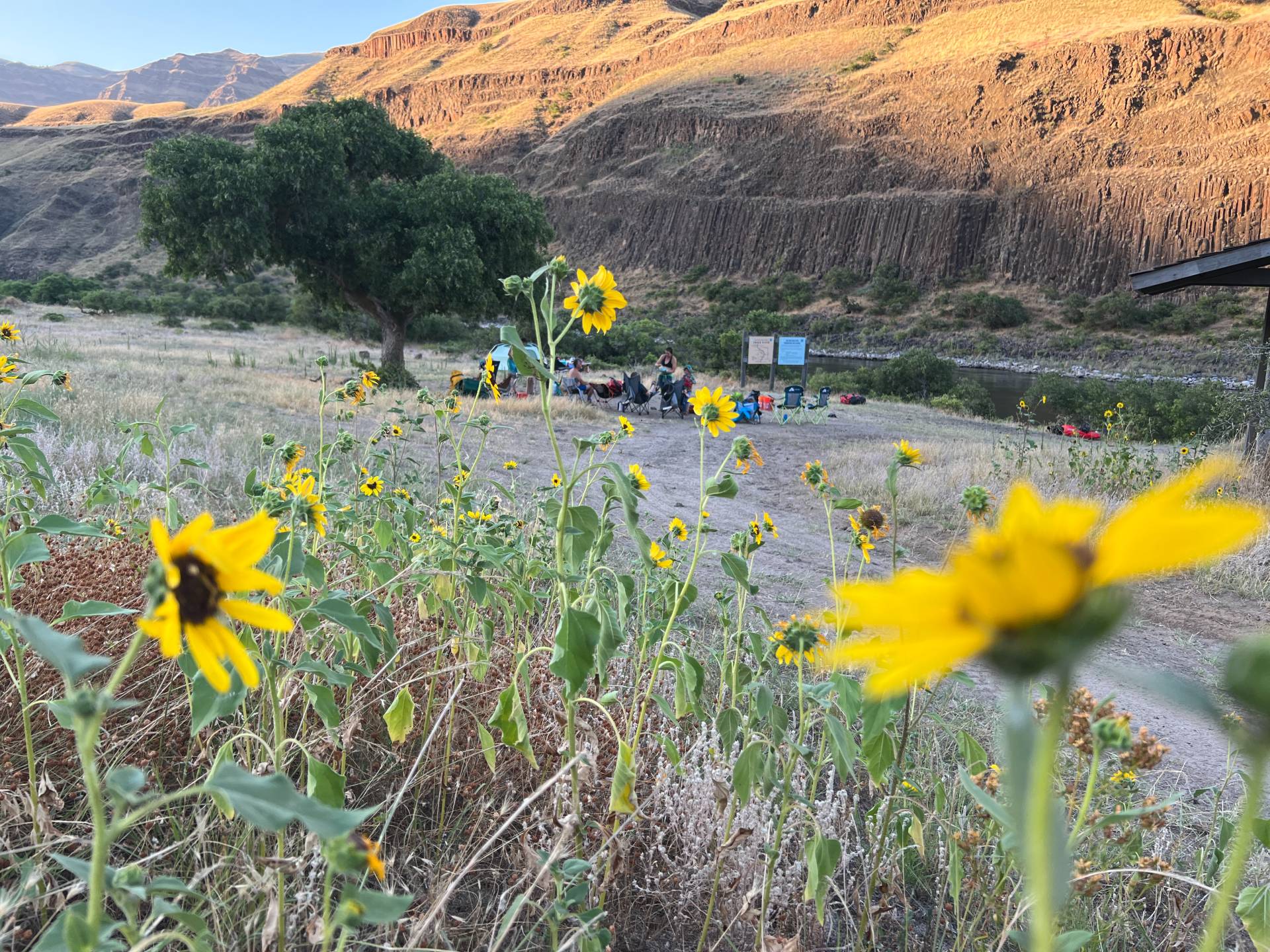 Our first camp delighted the TL when she realized it was an old farmstead and there could be apricots on the trees. And apricots there were. Tons of them. After dinner we explored the old orchard, picking the fruit and naïvely ignoring the possibility of what else might be attracted to ripe fruit.

When your small children run up to you squealing, “There’s a bear in camp,” your immediate reaction falls between disbelief and sarcasm: Oh, is there? Is he trailing behind a dinosaur, too? Or an angry unicorn?

But they insisted they heard something, so the adults dragged our feet to go “explore” the wild animal. When I rounded the corner, all of my wilderness knowledge evaporated as I ran full speed back to the camp kitchen to escape the—you guessed it—big black blear eating mulberries beside our groover.

As my persistent kids begged to get a closer look at the bear, all I could do was question my sanity. What did I get myself into? Can I keep my children alive? Should I have gone into the fetal position or stood my ground when I first saw that black bear? 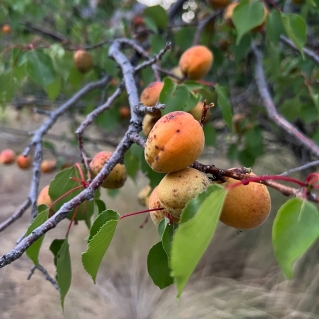 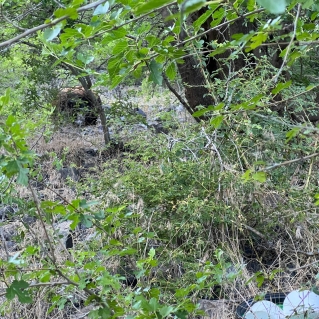 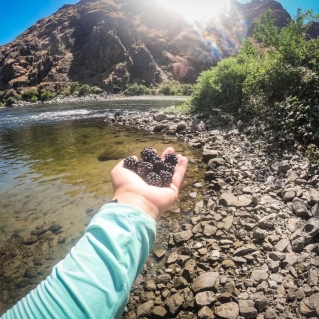 Lesson number two continued to test me throughout the trip: it’s okay to be scared.

We left the groover bear and headed out to pick more fruit only to spot another bear in the deep grass. This one saw us and jogged away which made me feel a little better, but also made me feel like man-eating mammals were slowly surrounding our camp.

The kids started picking apricots while I kept my back to the tree to make sure no one was mad at us for eating the fruit. But sure enough, with no warning, Amanda rushed us away from the tree back into the opening because… Rattlesnake! We learned that the rattlesnakes like to hang out under fruit trees because the mice eat the fruit that falls, and the snakes eat the mice. Which led us to sing “There was an Old Lady Who Swallowed a Fly.” I changed the lyrics in my head to “There was a bear who ate the lady, who ate the apricot and was bit by a snake,” but when you’re trying to keep seven children calm, you don’t sing that verse.

When I hit the pillow that night, my son Tucker, the only one of us with normal hearing, made it his duty to keep us informed of the bear’s presence. I won’t say I wished hearing loss on him at that moment, but knowing bears were in camp and feeling completely defenseless, made for a frustrating, sleepless night. 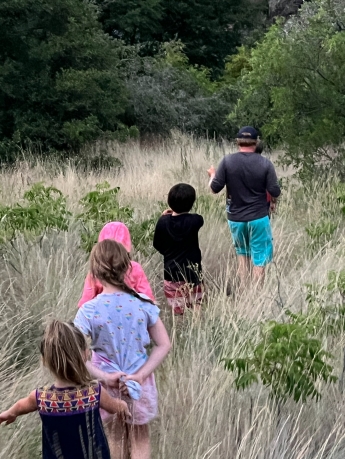 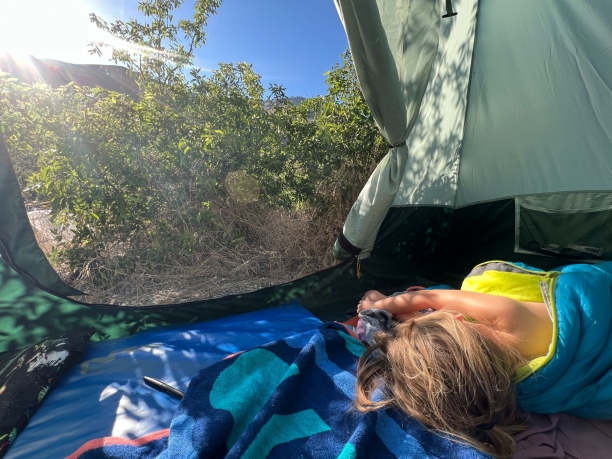 Nick and I have been on several multi-day rafting trips, and we had never had to deal with rattlesnakes or bears. Leave it to the universe to unleash the jungle the second I was alone.

Day two we had a rattlesnake in camp. Before toting the beast away from camp, they insisted on bringing the bucket close to me to see if I could hear the rattle. I could not. +1 to Emily’s fear, -1 for her confidence.

On the fourth day, I ditched my kayak to help row. My rafting buddy and I decided we would row in good spots for fishing, and as an avid angler, I knew where to go to catch fish. We probably added 10 miles into our trip simply from zig-zagging across the river. Both my kids were all about fishing and were casting and reeling—and tangling lines. 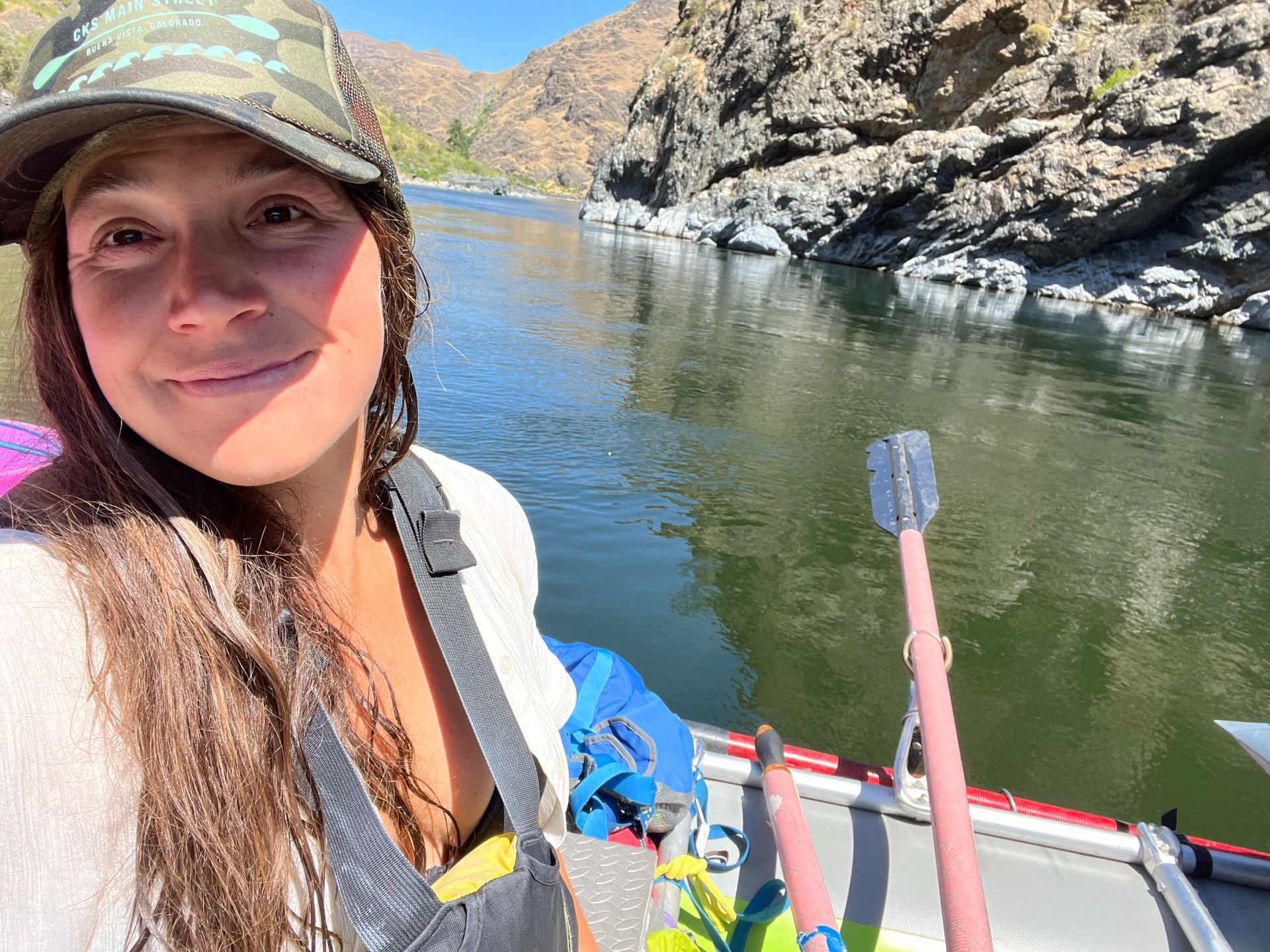 Lesson three: Let your kids learn by doing. It’s easy to get into the habit of fixing your kids’ problems. Sometimes, it’s easier to just do-it-and-move-on. And when there’s another parent around to focus on the other kid or your surroundings, the temptation to (over)help is there. If Nick had been there, I wonder if I would have babied them a little more, because I would have had more time.

Rowing the fishing boat all day, I had to focus on the current, I couldn’t stop to untangle their lines. So, as they tried and grew frustrated untangling their lines, they learned not to tangle them in the first place. As another example, putting up the tent was hard enough at the end of the day, brushing off their sandy feet wasn’t at the top of my list. So, they learned that sleeping in sand is uncomfortable. As I grew on this river trip, so did my kids. And maybe that was for the better—for all of us.

I returned to my kayak for the next two days. Tucker growing increasingly more “bored” on the raft, started to ask to paddle some more rapids. And herein lies lesson number four: Being bored is important. Tucker’s boredom led him to paddle longer days and as he pushed himself to show off in front of his friends, his skills improved. Looking back, boredom had prompted Parker to ask me for her toy (that I forgot to pack). Instead, she had to continue to play with her surroundings—the river rocks and mud and imagination. You can Google the importance of boredom and its effects on children and I think the results will surprise you. 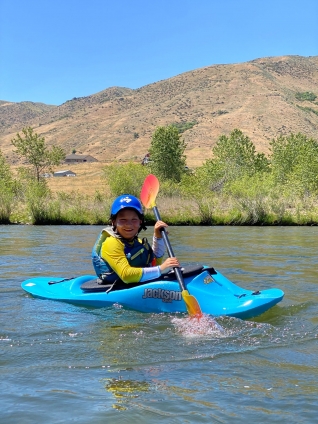 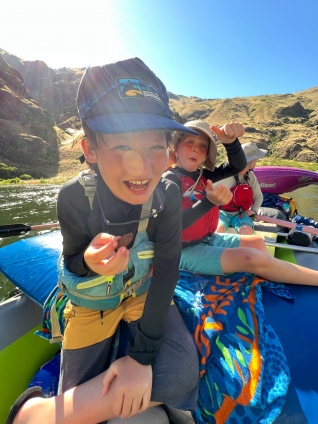 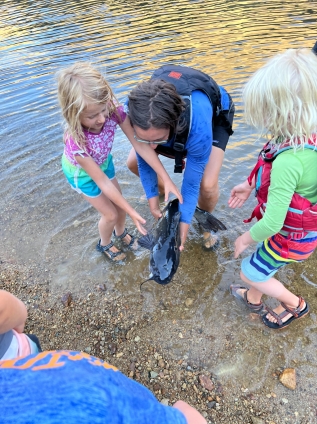 On the final day, we pushed through miles of flatwater and polished off the last of the snack bags. As I stuffed that final Ziploc into my PFD pocket, I remembered being in McCall just seven days before and how I had bought enough snacks for my kids to survive six months in the wilderness. The rules of packing may have applied to our gear bag—but let me share with you something I learned long ago: you can never pack too many snacks.

The key to packing snacks is to mix healthy with unhealthy—in the same bag. So, while I had carrots and apples, we also had fruit roll ups and chips. When you’re creating your goody bags, lay out each different snack and separate the quantity into the bags, combining the loot into a hodgepodge snack bag. Label the bags by day and then instead of having trail mix on day one and gushers for day two, your kiddos get a little bit of everything each day. This makes for a much more exciting snacking experience. And from a parent’s perspective, the whining and bickering decrease because there’s always something in the bag they want—or something they can barter with the other kids if they aren’t feeling it. 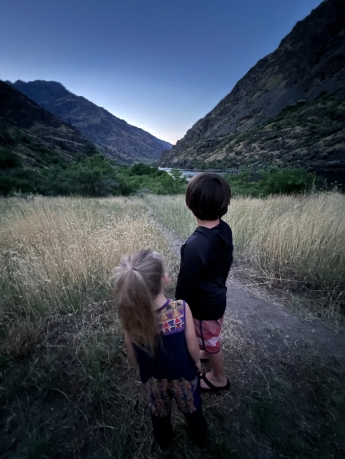 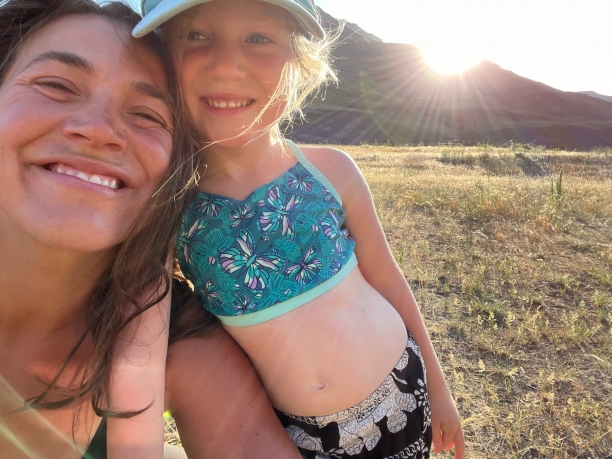 We reached the take-out early and everyone pitched in to get packed up and on the road quickly. While driving I reflected on the biggest lesson this trip down Hells without my life partner taught me: If you let yourself be vulnerable, oh the things you’ll learn. If you’ve heard the quote, “Leap and the net will appear,” by now you should know that I don’t live by that motto. As someone who handles anxiety by convincing herself that she is somewhat in control, saying yes without dotting all the Is and crossing Ts is not something I do. Until I did.

What I learned from this trip is that I still have a lot to learn. That my parenting way isn’t the only way. That I can put up a tent by myself and survive the ferocious beasts of the wilderness. That one kid can thrive under the watchful eye of others while I focus on the other—or myself. And that while I successfully kept my kids and me alive over seven days in the Idaho wilderness, it’s okay to still prefer the trips where Nick comes along—y’know, to set up the tent and all. 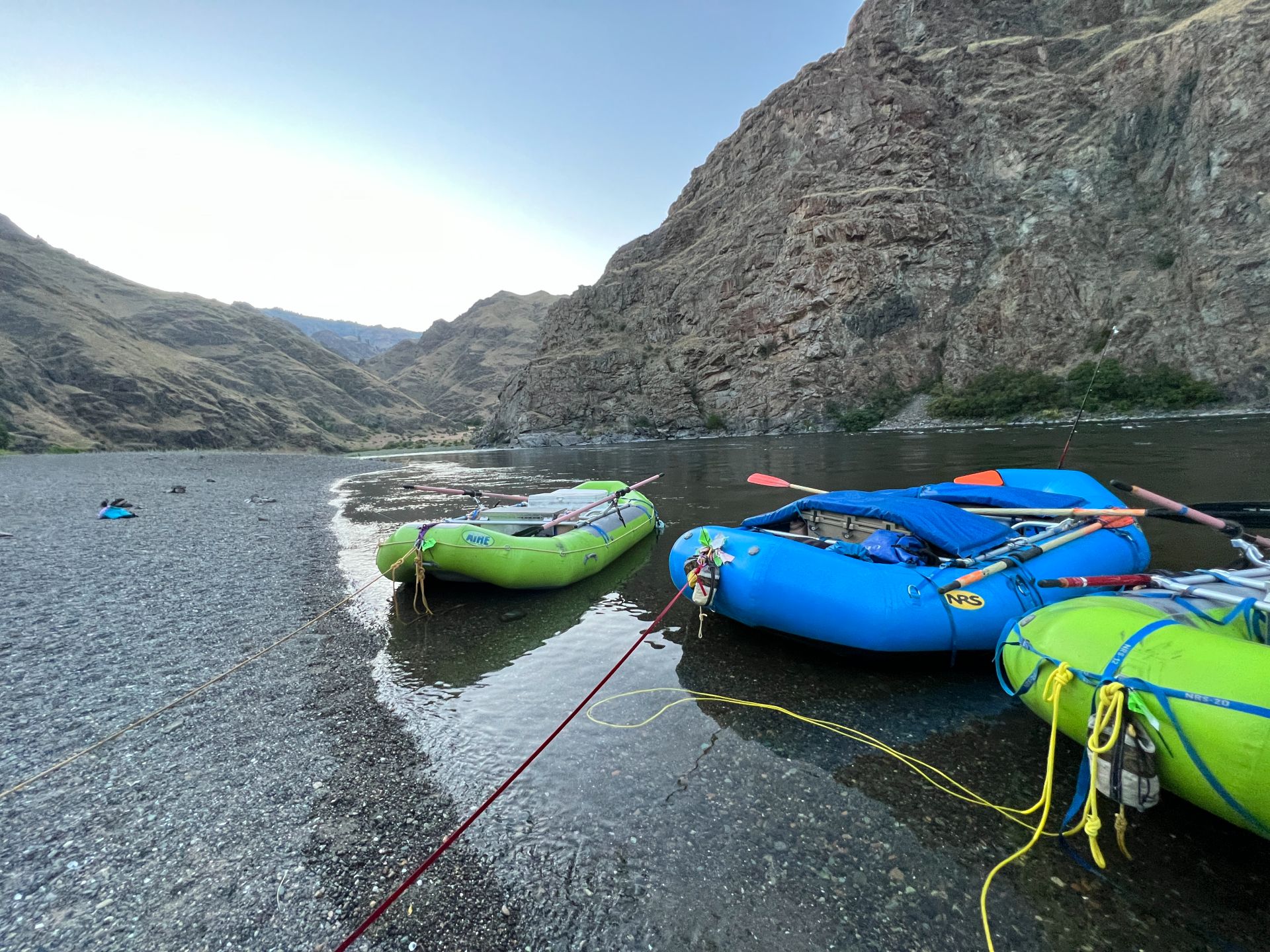