Surreal Encounters from the Inside Passage

Seventy-two days on the Inside Passage, from the first paddle stroke to the last. That’s 72 breakfasts, lunches and dinners. 72 days of finding campsites. Of drinking our water dry and finding the next stream to refill it. Of wildlife encounters. Of human interactions. 72 days of being so encapsulated in the moment that I couldn’t have told you what I’d done the day before. Days upon days of getting rained on. My hands becoming so pruned that even the backs of them had wrinkled and turned pale, my fingers doubled in width. Meals cooked and dishes washed, sometimes in the sea, other times in creeks or tide pools

A part of me never wanted it to end. The part that always wants to know what’s around the next corner. That part lives within every adventurer. An insatiable desire to explore, to carry on and continue. It’s what drives us through the lows and helps us reach new highs. I tried to take this experience one paddle stroke at a time. Hearing every bird and seeing every whale. But at the end, I still craved another breaching whale, another new experience. 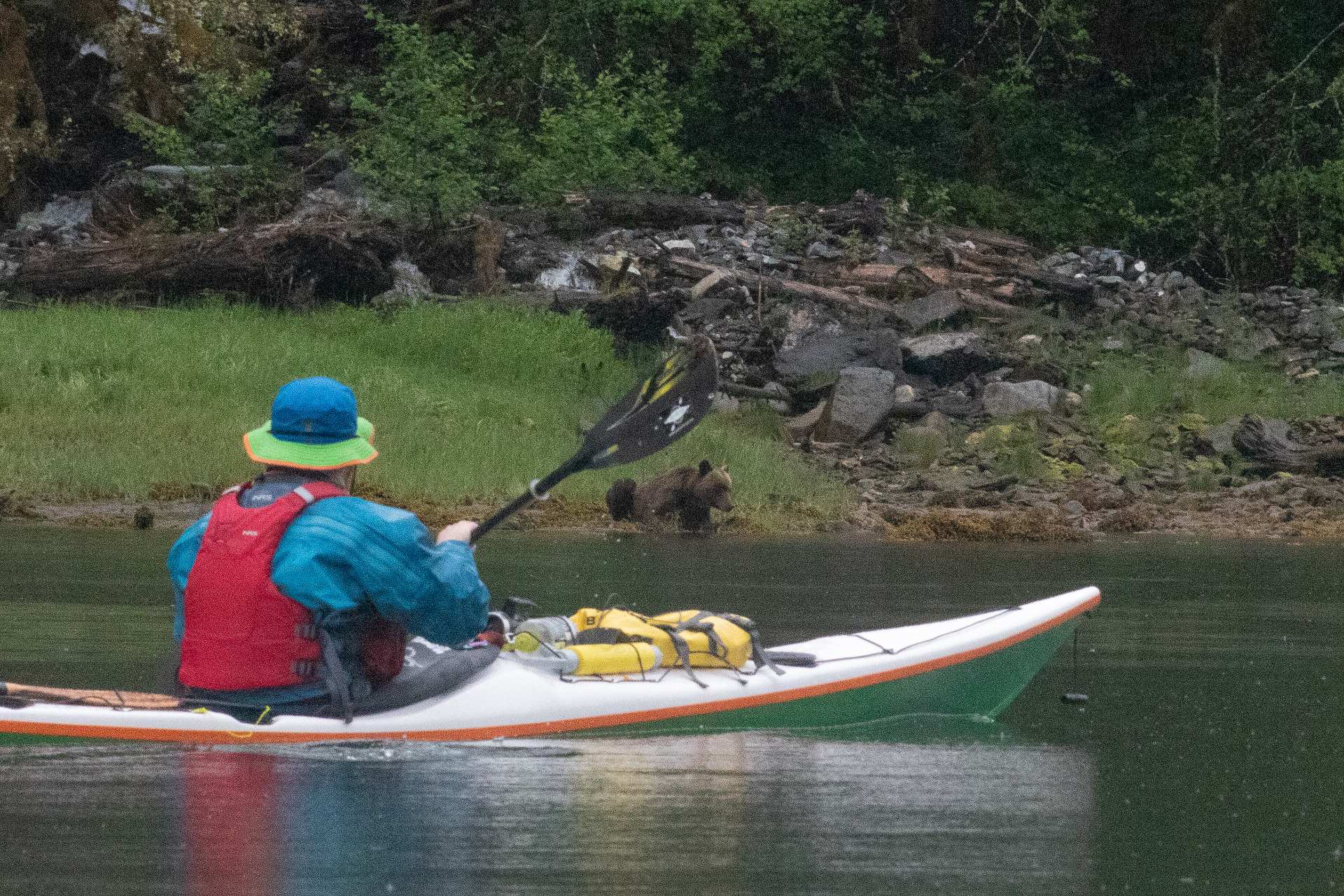 The expedition didn’t begin with the first paddle stroke. It began four years prior when I first moved from the U.K. to Canada and met two girls on their own journey north on the Inside Passage. I’d never even heard of it before. But those girls planted the seed. And it grew, fast. Kayaking across the border to Alaska and beyond to Skagway took over my daydreams. It sounded so completely… wild.

In the UK, you’re never farther than six miles from a road, so to imagine pushing a boat out into the great northwest, where I might not see another soul for days on end—I was hooked on the thought. Yet it would be a challenge beyond anything I’d ever taken on before. That’s where my friend and fellow guide Nuka comes in. He’s the only person I know with this kind of experience. He was the first—and only—person I asked to join me.

It was necessary to find a teammate as goal-driven as me, who shares my ambition, whose strengths cover my weaknesses, who can handle their own when the ferocity of the ocean comes for us. At the same time, it had to be someone who I am happy to share a drink with at the end of each long, arduous day—for 72 days straight. 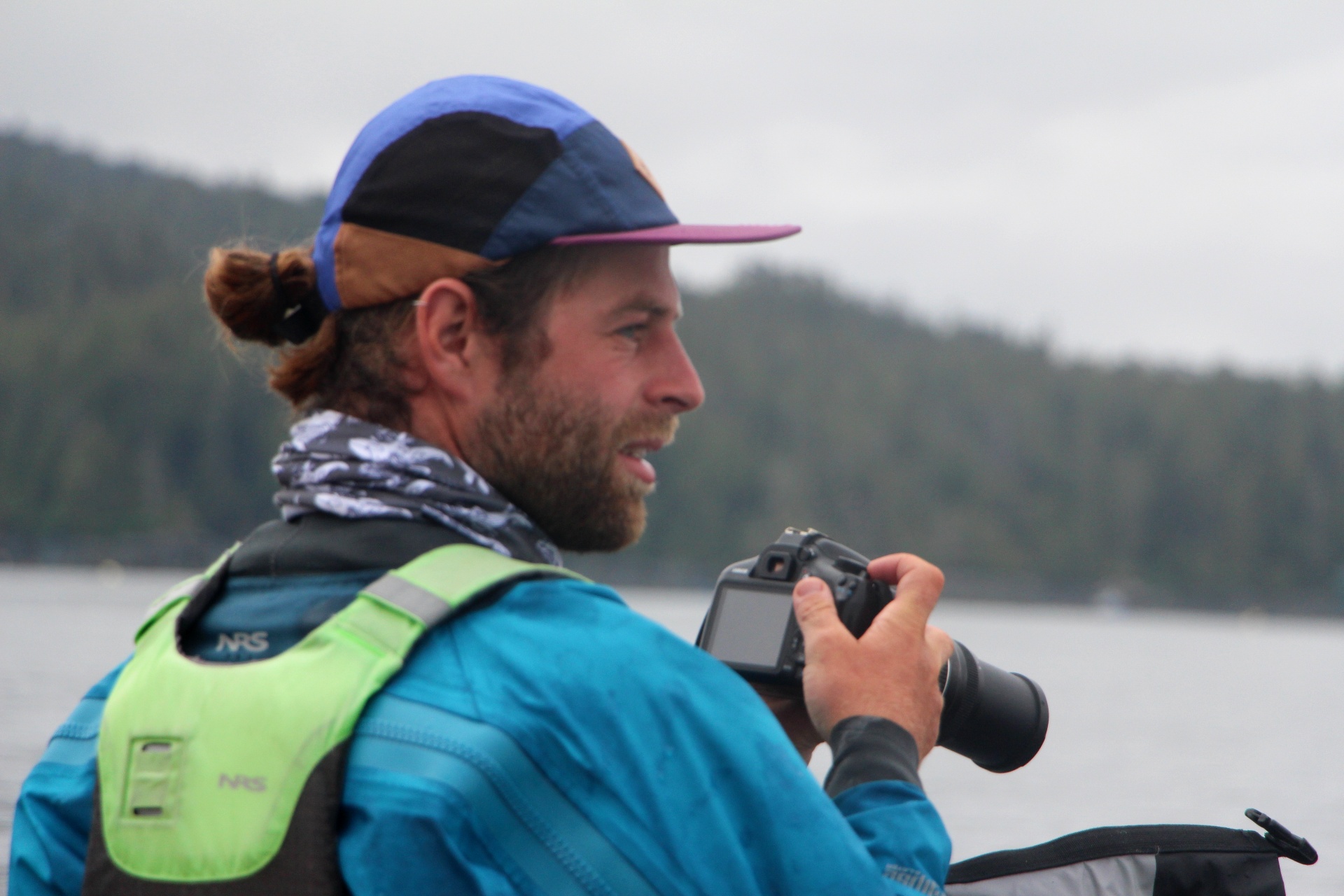 Together we lived, we struggled and we experienced unimaginable moments. You’ve seen a whale on television and it’s captivating. Maybe you’ve seen one from a whale-watching boat tour. You can hear it, you can sense the scale of the animal. Now, swap the power boat for an 18-foot kayak. It’s been seven days since you saw another human, you’re tired, skin covered in salt. There’s no one else around, just you and your friend. You feel so small, tiny even. You’re a visitor in their home and this whale has blessed you with its presence, deciding to take a breath right there in front of you.

Each wildlife encounter we had was magical. But one of my most special mornings was spent in McKay Reach. This is a deep, narrow channel running on the north end of Princess Royal Island. Our campsite was an earthly replica of Rivendell. The mountains fell sharply from their peaks down to the small flat we called home and continued on a steep drop-off where the land met the water. Waterfalls cascaded either side of us, creating a beautiful hanging mist that danced around the forest. Simply spending the night there was a wonderful experience, but it’s what happened the following morning that I’ll never forget. 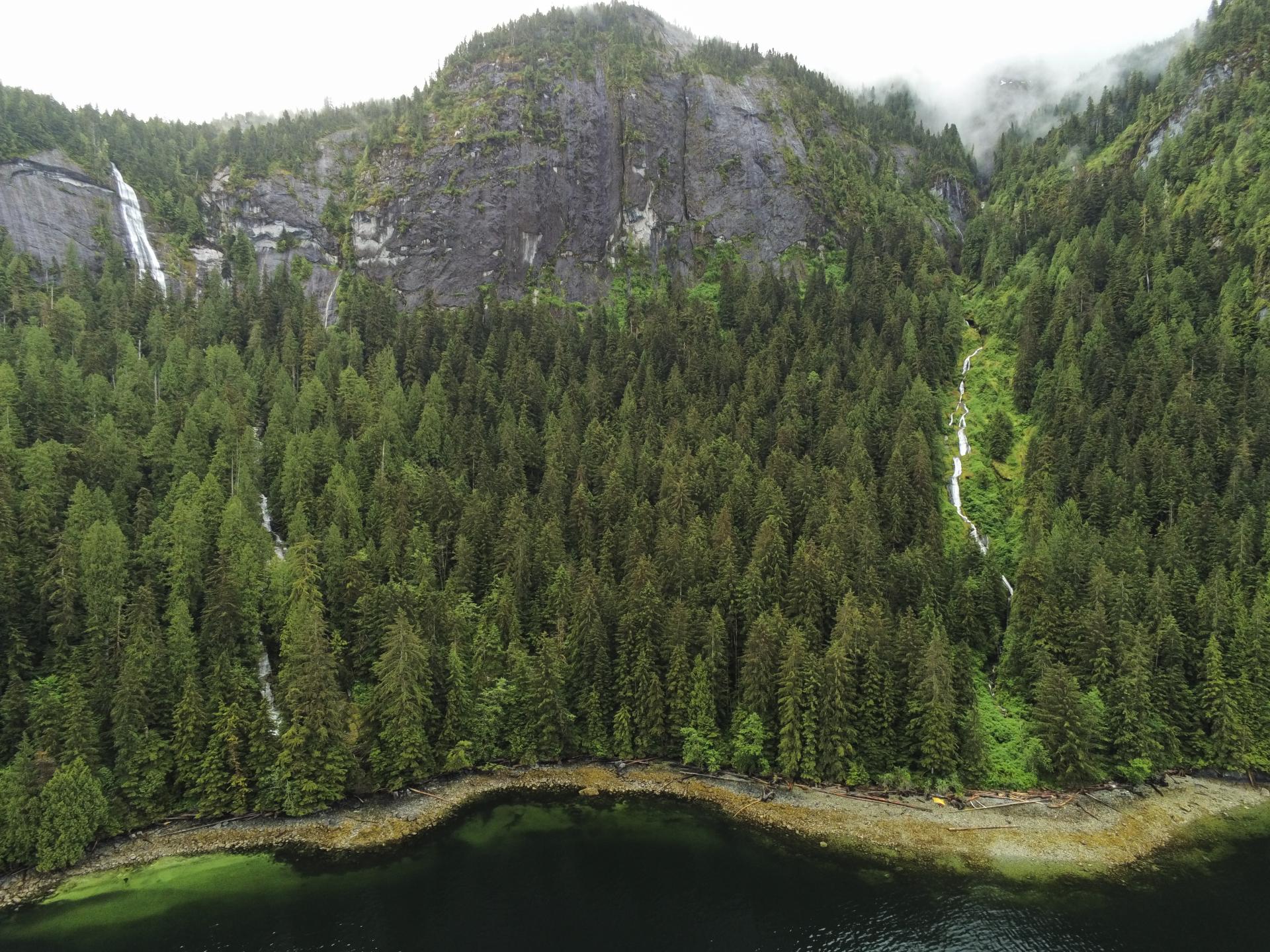 Whilst Nuka prepared breakfast, I wandered down the beach, taking it all in, stretching my legs I heard a ‘WHOOOSHHH’ and turned my head to see a humpback whale, meters from shore. A whale’s exhalation rockets with such booming power that you can hear them from great distances. And when they’re up close, it sounds like a shotgun blast firing over your shoulder.

I ran back to Nuka to tell him how amazing seeing the whale was and as I’m explaining what just happened, how close it was and how large, over his shoulder I see something that made my eyes widen and jaw drop. Three humpbacks all surfaced at once, mouths open, vertically into the air. “Turn around! Turn around! Turn around!” I yelled.

Nuka swung round and saw it too. I’d only ever see this on TV. They were bubble net feeding, a food-catching technique that requires great coordination. One whale swims deep and releases air bubbles. These bubbles work as a sort of net, pushing fish together into a dense ball. Then, in synchronicity, the whales all lunge up toward the fish with their mouths open. And they were doing it right in front of our camp. 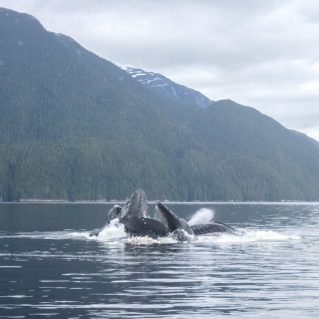 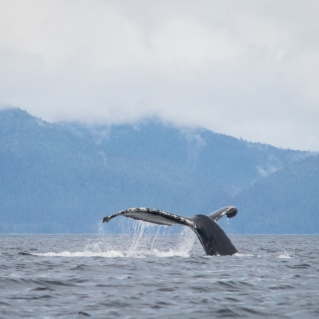 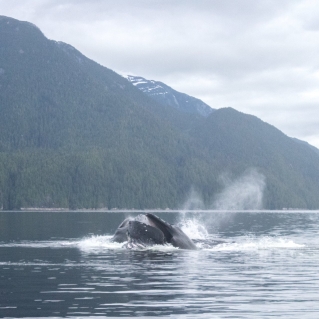 We rushed to grab our cameras and, taking advantage of the low tide, positioned ourselves as close as we could to the drop off without getting our feet wet. They were so close we were able to see the bubble net slowly forming, each bubble adding to the lasso. We focused directly on the action zone in time for the climax.

That day, we decided we would take a slow morning. Setting our chairs by the water, we poured another coffee and watched the humpbacks catch their breakfast for almost an hour. 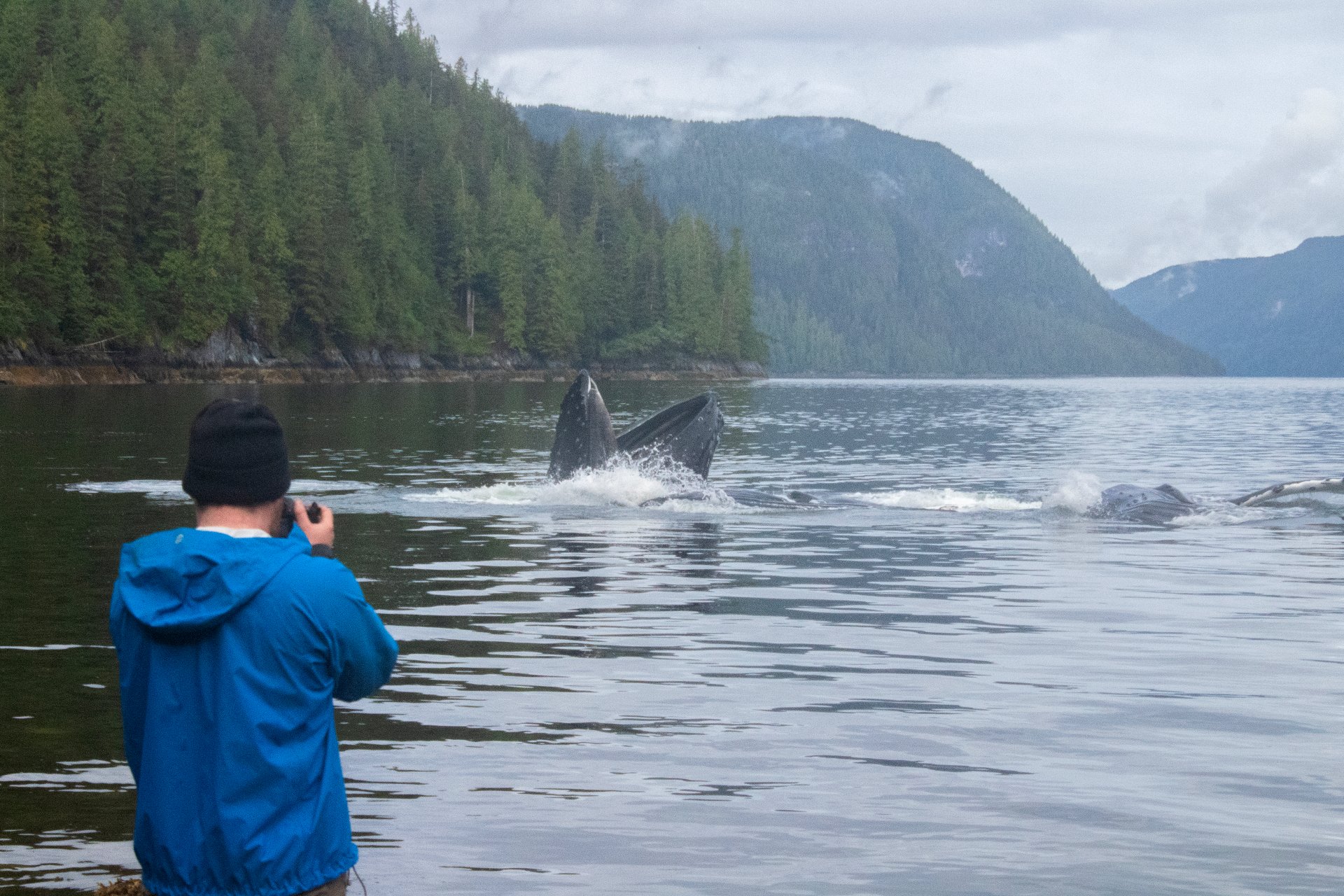 I was expecting wild moments with wild creatures. I knew we’d be going deep into the wilderness and would cross paths with many animals along the way. What I hadn’t considered were the many incredible moments and interactions with people. It’s not that there were many people, but those who we did meet, few and far between, were all so meaningful and genuine.

Wild places attract a certain kind of person, and we all share a mutual respect for one another. We recognize that we’re all on a similar path. Not necessarily from A to B, but on our journey through life—seeking adventure and experiences amongst nature. People would hear of our expedition and invite us to join them for food and drinks on their sailboats, to share stories and tales of what we had seen so far.

They’d often apologize for all the questions, unaware of how much we cherished these evenings. Retelling the day’s events gave us a chance to take stock of the adventures we’d had so far and remind us how truly epic this experience was. (Not that we needed a reminder.) We’d leave well-fed and often with the next few days of campsites annotated on the chart. 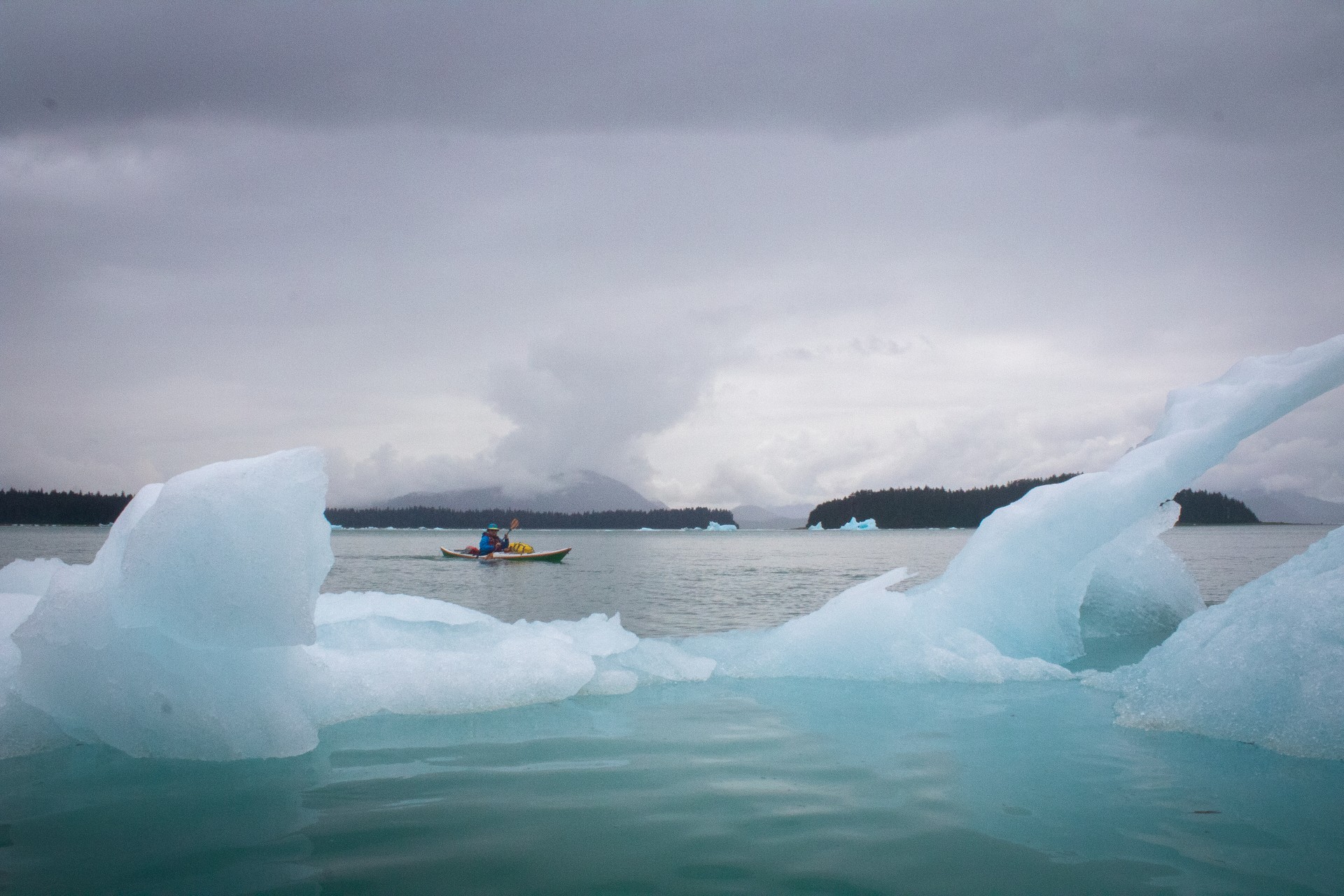 But there was one person who really stood out, Doug. Doug is the elected Chief of the Kitasoo Xai’xais nation. A new friend, Simon, had given us his number and told us to phone Doug when we arrived in Klemtu. Doug would be able to help with anything we may need. We’d forgotten to buy stove gas at our last resupply point, so we were in desperate need of that. We would also be arriving on a Reservation and sought the permission of the Chief for an appropriate place to camp.

We gave him a call as soon as we arrived and in no time at all, Doug was there to greet us with a full container of camping gas. He welcomed us to the community, told us to walk and explore freely. A few families had already greeted us as they passed, the parents encouraging their children to ask us about our boats and where we were going. 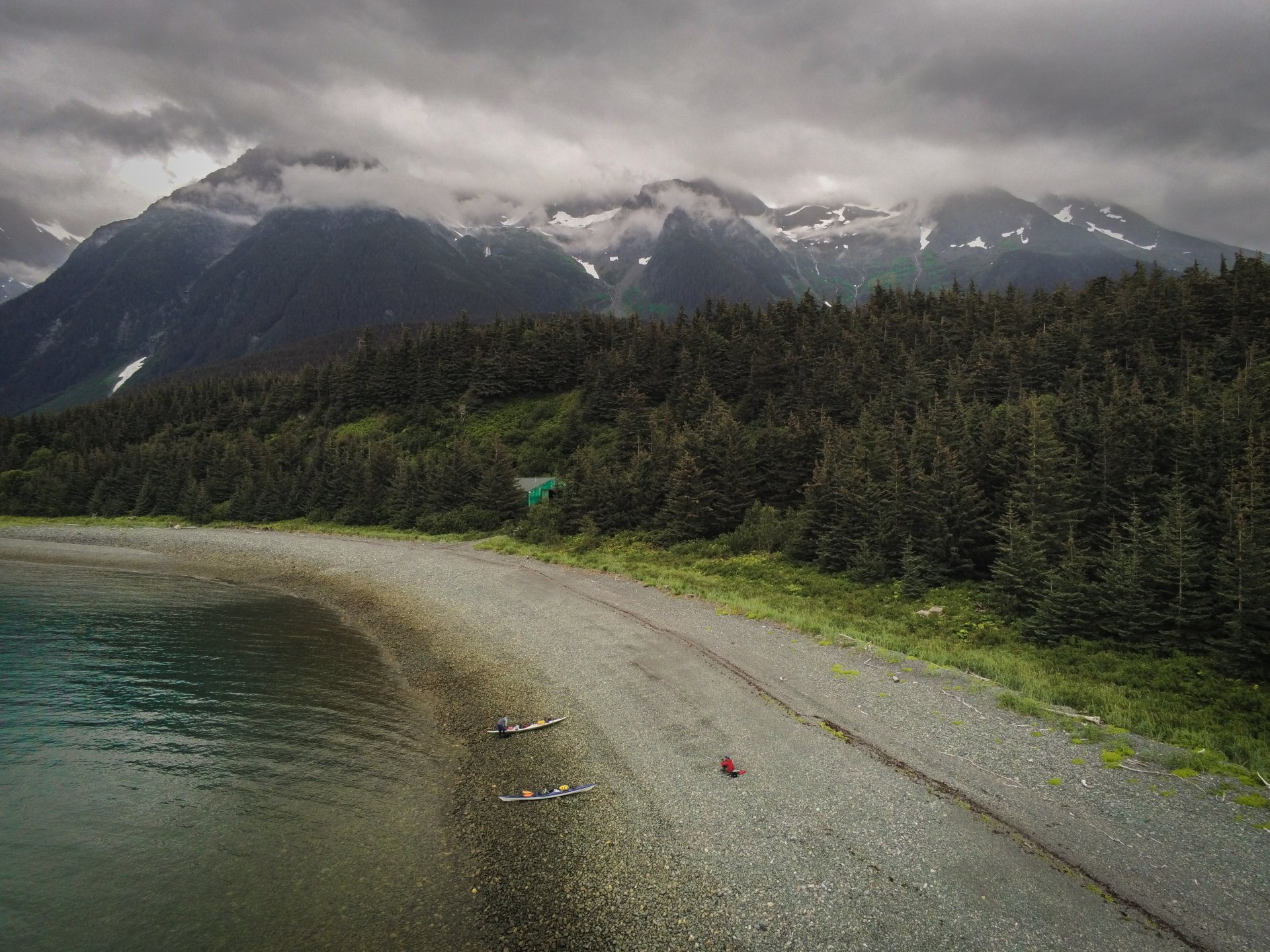 Doug then offered to give us a tour of the Big House. This is a ceremonial building with incredible significance in First Nations culture. I’d only ever seen one before, just a week earlier in Bella Bella. I was thrilled with the opportunity to take a closer look, to see inside and hear more about how they are used.

The building was a large wooden structure, built on an outcrop of land amongst the trees, with water on either side. Doug showed us the art painted across the front and around the Big House, which showed the four lineages of the Kitasoo Xai’xais people.

The already huge building felt even bigger from the inside. The main floor was sand, with a fire pit in the middle and seating up either side. The Pot Latch ceremony would take place here, which is a big feast, with dances, songs and storytelling. Two totem poles stood at each end. Doug told us the story of the Big House, the people here, and of their creation, which is not my story to pass on, but it was a great honor to listen. 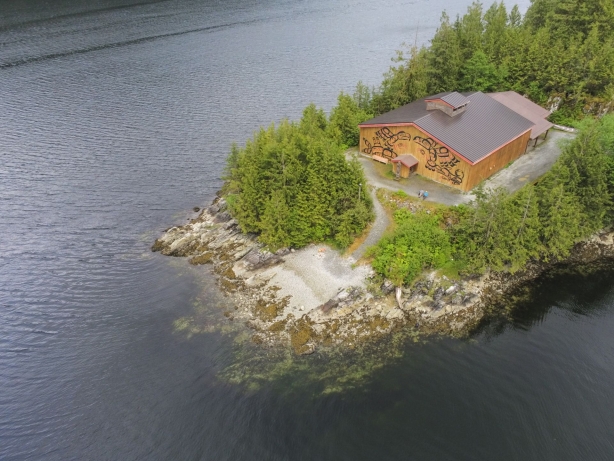 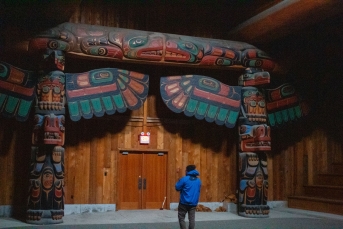 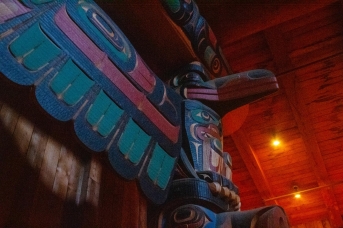 As Doug continued the tour, the rain outside increased, pounding the roof of the Big House. “Have you guys made camp yet?” he asked. We hadn’t. “Do you want to sleep in here?” I couldn’t believe what he was offering. To spend a night inside, warm and away from the rain, and to be able to dry out our gear is always appreciated. But this gesture was so much more than that. This was a chance to spend time in the Big House.

I could sense something when I walked into the building earlier. As if I could physically feel the spiritual and cultural importance held within these walls. We walked around in silence, letting Doug fill the space with his words and stories. It added to the weight of its importance. We accepted his offer, thanking him greatly for his unbelievable kindness and generosity. It was a huge honor that neither of us took lightly. 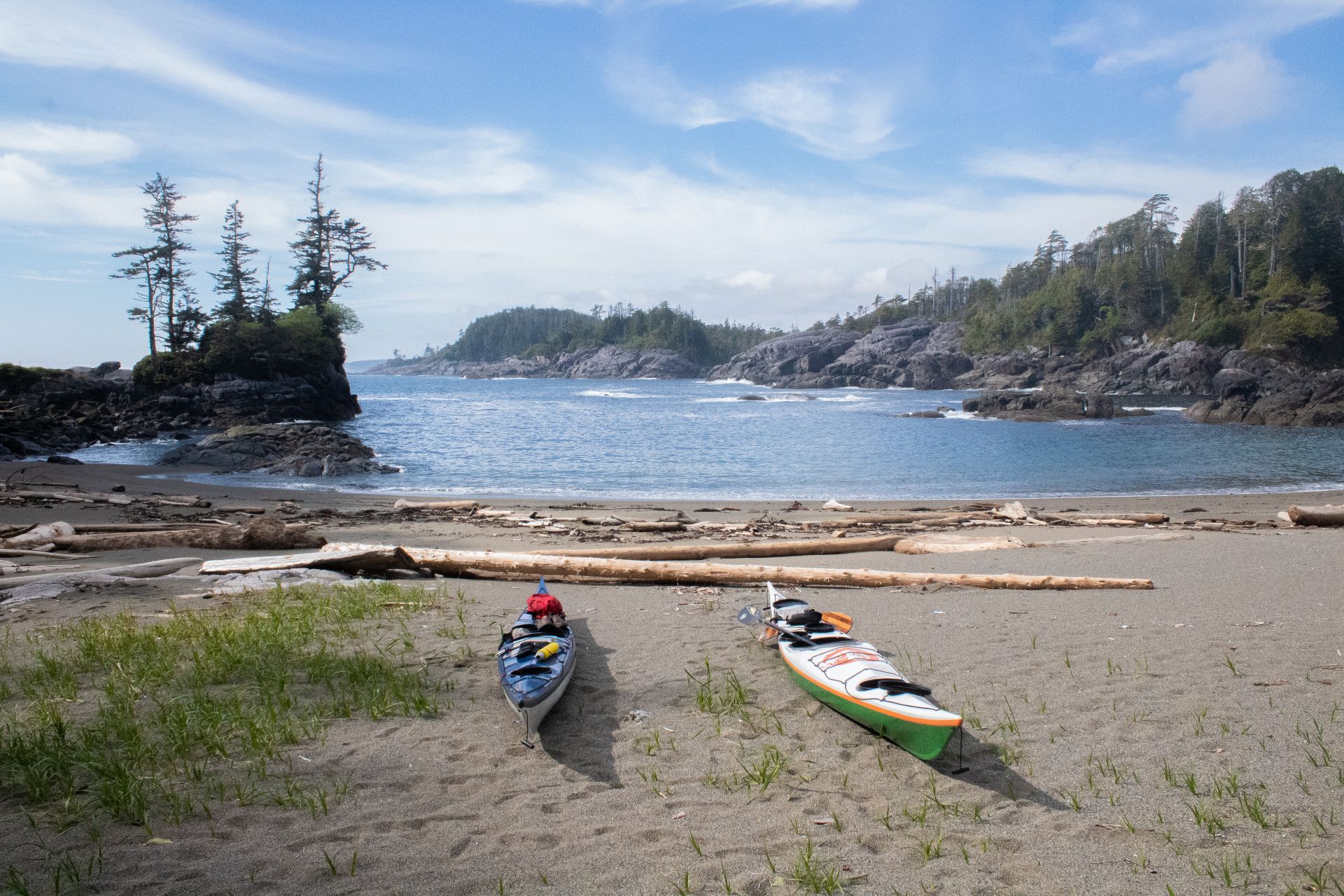 People would often ask me ‘Why?’ Why do a trip like this, to put yourself through hardship in the cold and damp coastal forests of British Columbia and Alaska? I always found this question difficult to answer. I guess because when I first heard about the Inside Passage, my first thought wasn’t ‘why,’ but ‘how.’ How could I do something like this?

I count my wealth in experience over possessions. I want to see all there is to see, visit new places, learn about new people and their cultures. I want to do things that are hard to develop my character and do things that are fun to remind myself to enjoy every moment. This expedition was all of that. And when I’m grey and old, I’ll look back happy and fulfilled, knowing that I have lived. 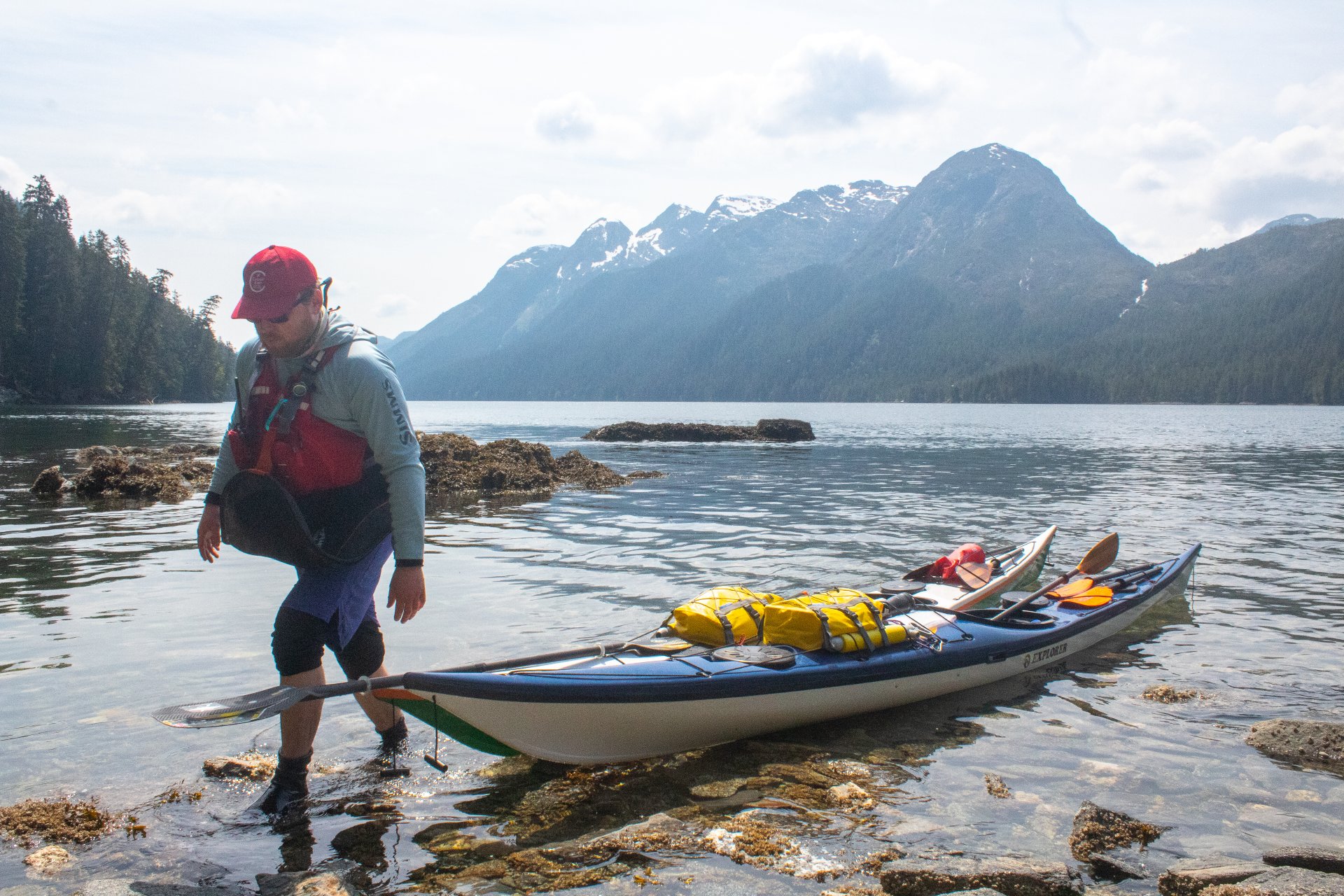 Editor’s Note: Guest Contributor Chris Whittaker is an expedition leader and photographer. He spends the winter months chasing snow and the summer leading sea kayak trips around the world. Chris’s work and adventure tours can be found on IG @global_shenanigans or through his site: www.global-shenanigans.com.