I turn to look at the young woman floating in the eddy to my left. “¿Estas lista?” I ask with a marked American accent. My Spanish attempts are horrible, but she understands what I’m trying to communicate.

Isi splashes her face with water, grasps her paddle, and nods her head with confidence, face set in fierce concentration. She looks like a warrior preparing for battle, despite being only 13 years old. 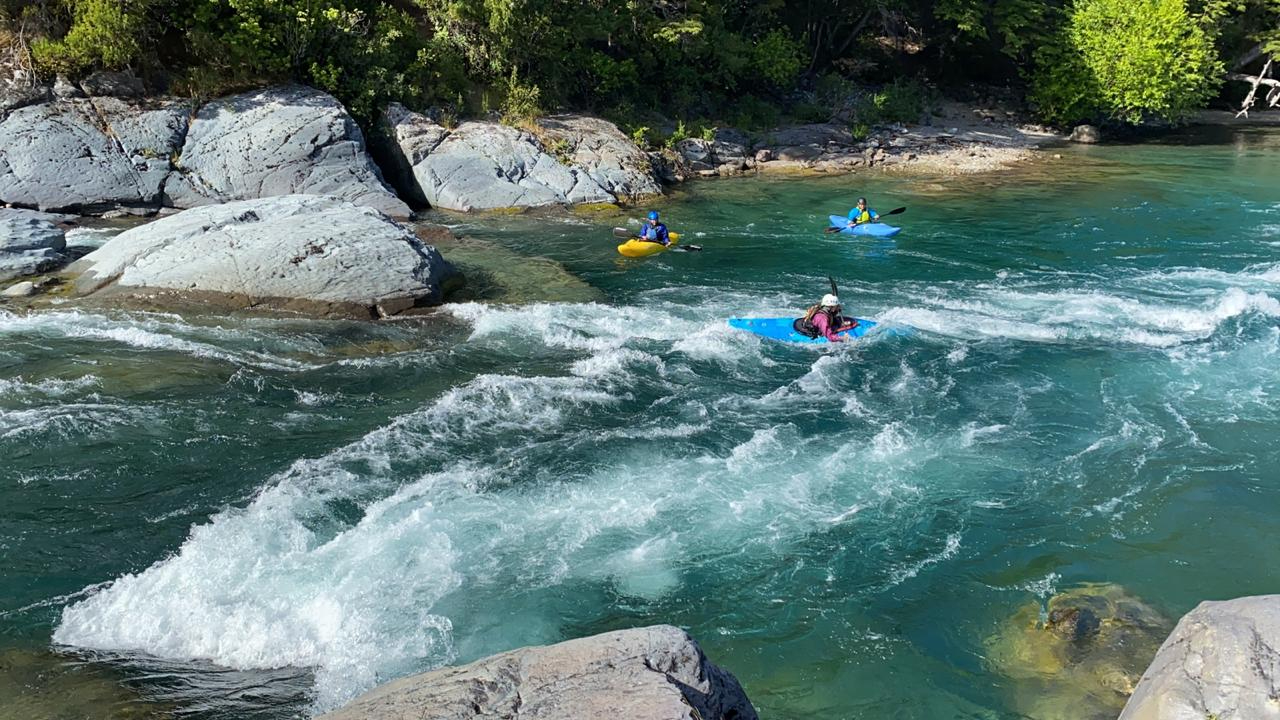 Isi follows my paddle strokes one-for-one. We punch across the boily eddyline and head for the crashing waves downstream. When I turn around to check on her, she is right on line, her bright blue creekboat flying over the crest of the first wave. I navigate my boat to the left side of the channel to avoid an oncoming rock and see one of the women in front of us capsize in the boils.

“Uh oh.” I wonder if Isi is going to see her friend capsize, lose her confidence, and flip in the same spot. But as I paddle through the last of the boils, I turn around to see Isi right on my tail, perfectly timing her strong strokes with the whitewater of the Futaleufú River, a massive grin plastered across her face. 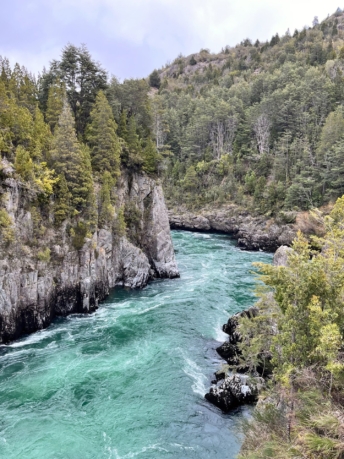 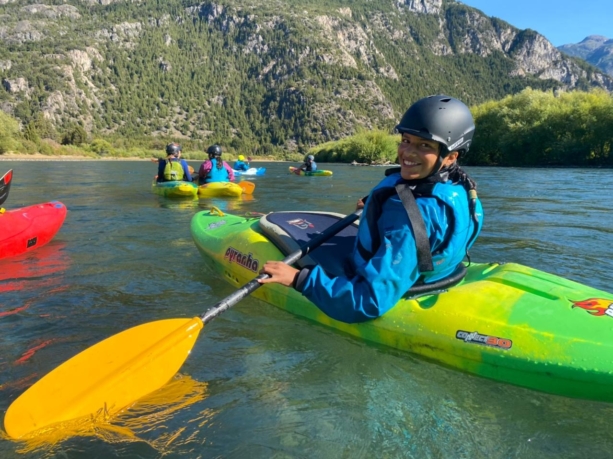 This memory has been on my mind ever since I visited the Futaleufú River in Chile last February to volunteer with Chicas al Agua, a program that provides free kayak instruction, equipment, and environmental education to young women ages 12-17 in Futaleufú, Chile. As I prepare to meet with Rocío González, I can’t help but think about the day I spent helping lead three local teenage women down their home river for their first time. It was the highlight of my trip.

The Futaleufú River originates in the Andes Mountains in the Patagonian region of Argentina. It flows west into Chile, before depositing into Yelcho Lake. The name “Futaleufú” means “Big River” in the Indigenous Mapuche language, and if you’ve ever paddled the whitewater of the Futa, you probably understand why. The rapids thundering down the river’s canyon earned the names “Avalanche” and “Terminator” for a reason. Massive waves and holes define the characteristics of the whitewater of the Futaleufú. But beyond the whitewater, the river is an irreplaceable resource that must be protected.

Rocio González is the Executive Director of Futaleufú Riverkeeper, and she knows this all too well. Futaleufú Riverkeeper is an organization within the Waterkeeper Alliance and Chicas al Agua, the program I volunteered with last February, is one of their main programs.

Futaleufú Riverkeeper’s mission is to contribute to the protection of free-flowing rivers in Patagonia, foster the harmonious coexistence of all beings of the Futaleufú watershed, and become a strong support organization to strengthen communities and people.

Rocio’s involvement with Futaleufú Riverkeeper began when she moved to the area in 2013. “My husband and I were looking for a better quality of life away from the city. When we came to Futaleufú, we were so amazed by the dramatic beauty of the place: the majestic mountains, the mighty river and the native forest. Plus, the beauty of the community caught my heart very quickly. When I found out that the river was threatened by dams, I knew I had to do something to try to stop it and I found that opportunity by working for Futaleufu Riverkeeper.” 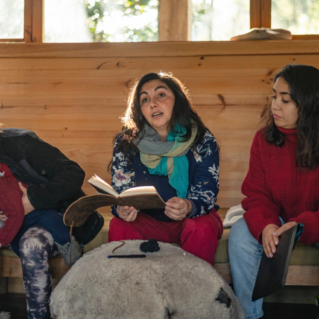 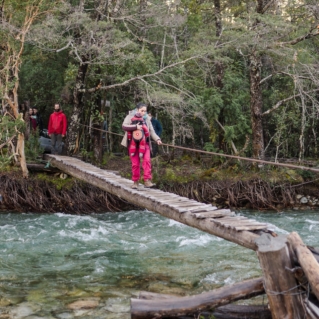 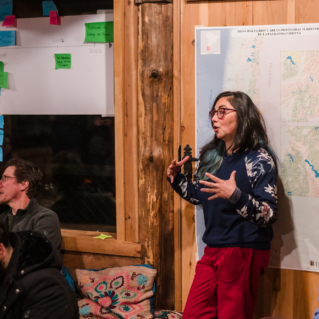 Rocio volunteered with the organization for several years before becoming Executive Director in 2016. Today, river conservation permeates her life. She bought land with her husband at the confluence of the Chico River and the Futaleufú River and turned it into a conservation easement. While Rocio lives there with her husband and two children, they have ensured protection for the riverbank and native forest.

In Chile, rivers are extremely vulnerable to the threat of mega hydroelectric projects. When Rocio moved to Futaleufú, she learned of an imminent dam project, which, if completed, would negatively impact the entire riparian ecosystem. “The water rights of the Futaleufú River were in the hands of the electricity company ENDESA, which planned to build three dams—two on the Futaleufú River and one on the Espolón River,” explains Rocio. In 2016, the company decided to return those water rights to the state, opening a window of opportunity to protect the river. “So far, there are no requests for water from other hydroelectric companies, but that won’t last long,” she says. “As long as water is managed in Chile under the water code, the Futaleufú River will always be vulnerable.”

Chile operates using a “water market.” Water can be bought and sold in Chile like a house, and big dam operations or mining companies can buy the non-consumptive rights to the water of a river. Currently, Futaleufú Riverkeeper is working on a technical report to request Reserva de Caudal (a Water Reserve) on the Futaleufú. If approved by the President of Chile, a Water Reserve would take the river off the water market and prevent anyone from requesting water rights for a hydroelectric project.

Political advocacy and community outreach are highly important to organizations like Futaleufú Riverkeeper. Programs like Chicas al Agua serve to connect community members with their watershed, which helps create more advocates speaking out for the protection of said watershed. “[Chicas al Agua] is motivated by the premise that to achieve longer term conservation efforts in the area, the local community needs to be empowered to play a key role in those efforts,” explains Rocio. “With the help of volunteer women instructors, every year we offer a six-week program to girls 12 to 17 years old.” Providing young women with the skills to explore their local river, and the knowledge about its ecosystem is imperative to ensure the river remains protected in future years. 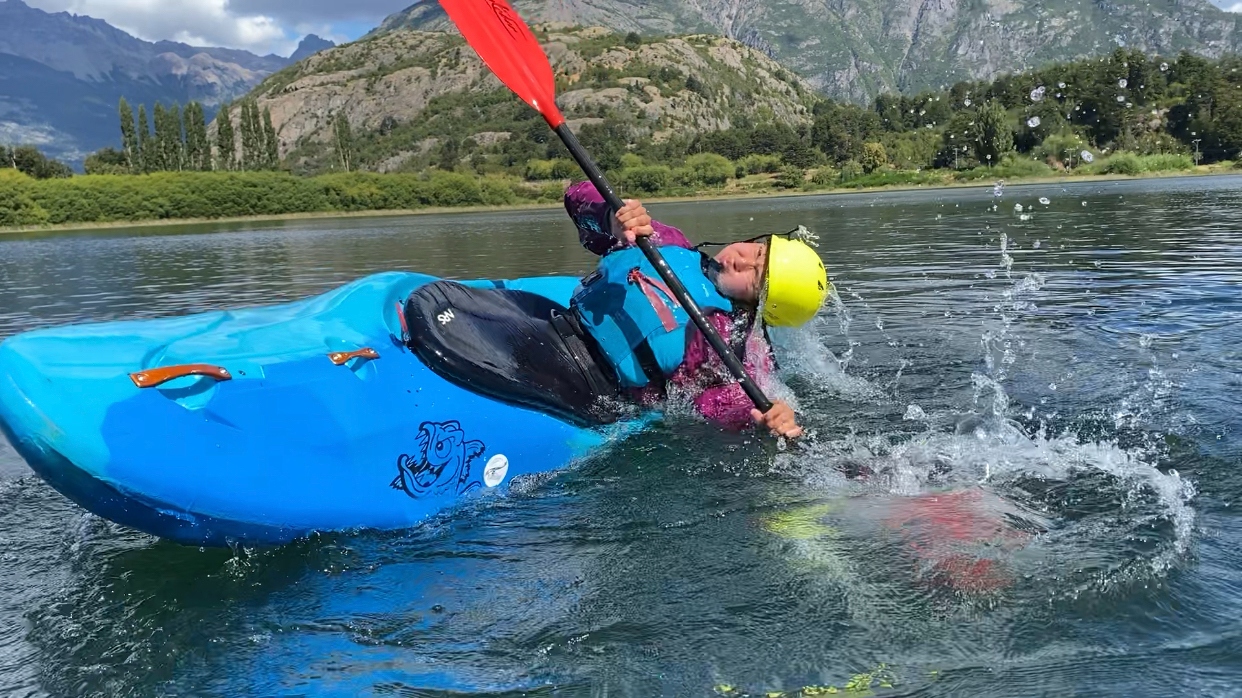 In the three days I spent with Chicas al Agua last February, I saw first-hand how impactful the program is for the young women of Futaleufú. All of the participants arrived without any prior experience in a kayak. Many of them didn’t even know how to swim. By the end of the six-week program, almost all of them could roll consistently, and many of them were smoothly paddling the class III+ whitewater of the Macal section of the Futaleufú. The boost in confidence that comes with these skills is hard to find elsewhere, especially in the male-dominated sport of whitewater kayaking.

The results of this program have already proven positive. Nicole Toro, a Chicas al Agua alum, recently became a water quality monitor for Futaleufú Riverkeeper’s Community Based Water Quality Program. This program works with the help of around 20 local volunteers who take monthly samples in the watershed. “This program not only helps us ‘take the pulse’ of our local rivers and lakes, but also creates a community of river advocates and empowers local knowledge about water and rivers,” says Rocio.

“[Nicole] is truly becoming one of our river ambassadors,” says Rocio. “She wants to enter university next year and she feels that Chicas al Agua and the water monitoring program have helped her a lot in pushing herself to achieve that goal.” 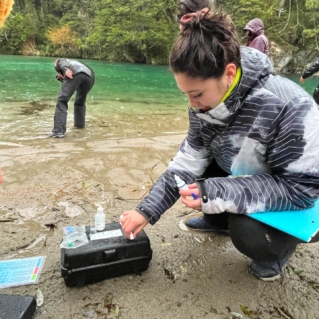 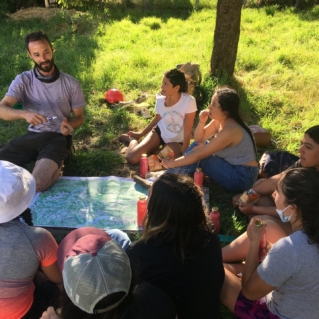 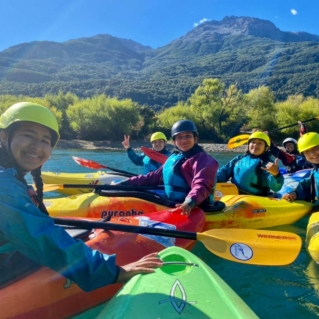 The Futaleufú is an iconic river, nationally and internationally, and provides solid economic value to the region through recreation and tourism. “Every year more and more people from all over the world travel to Futaleufú to see the river and enjoy its waters,” says Rocio. Snow-capped mountains tower over the crystal-clear water, and rays of sunlight dance along the vine-covered cliff faces. Local families enjoy their time on riverside beaches while whitewater kayakers play on eddy lines and local guides paddle rafts loaded with tourists.

Yet, Rocio views rivers far beyond their economic value. “Rivers such as the Futaleufú, which have great landscape value and scenic beauty, should be protected because they not only provide local benefits but are part of the natural heritage of Chile and the world,” she says. Rivers serve a far greater purpose than simply serving humans. Rocio, and many other conservationists like her, believe it is our responsibility to take care of them. “Futaleufú is my home. It is the home of my family, my kids, and the people I love,” says Rocio. “We should be responsible for the care of it.”

Writer’s Note: Chicas al Agua is a growing program with an increasing number of participants each year. A sponsorship with NRS covers most of the gear needed for the program. However, the program is still lacking in kayaks and paddles. Last season, the program had 12 young women learning how to kayak, but only four kayaks for them to use. If you’re traveling to the Futaleufú River with a kayak and paddle and would like to donate your equipment to the program when you depart, you can contact them at info@futaleufuriverkeeper.org.

Editor’s Note: A shorter version of this profile first appeared in Kayak Session’s #84 Winter Issue.  The River Warriors series highlights paddlers who do more than paddle.