In late June I was sitting under a cottonwood tree on Havasu Creek, eleven days into another Colorado River trip through the Grand Canyon. Looking upstream: a pool on my left, not quite stagnant, teeming with the youngest of canyon-dwelling amphibians, a persistent cascade of aquamarine water on my right. Aesthetically, it was like a dream, like something from those middle school geography books, the pages full of photos from faraway places that aren’t midwinter Alaska, places that aren’t school, places too exotic and beautiful and warm to be real. But that day, it turned out, those places were real. 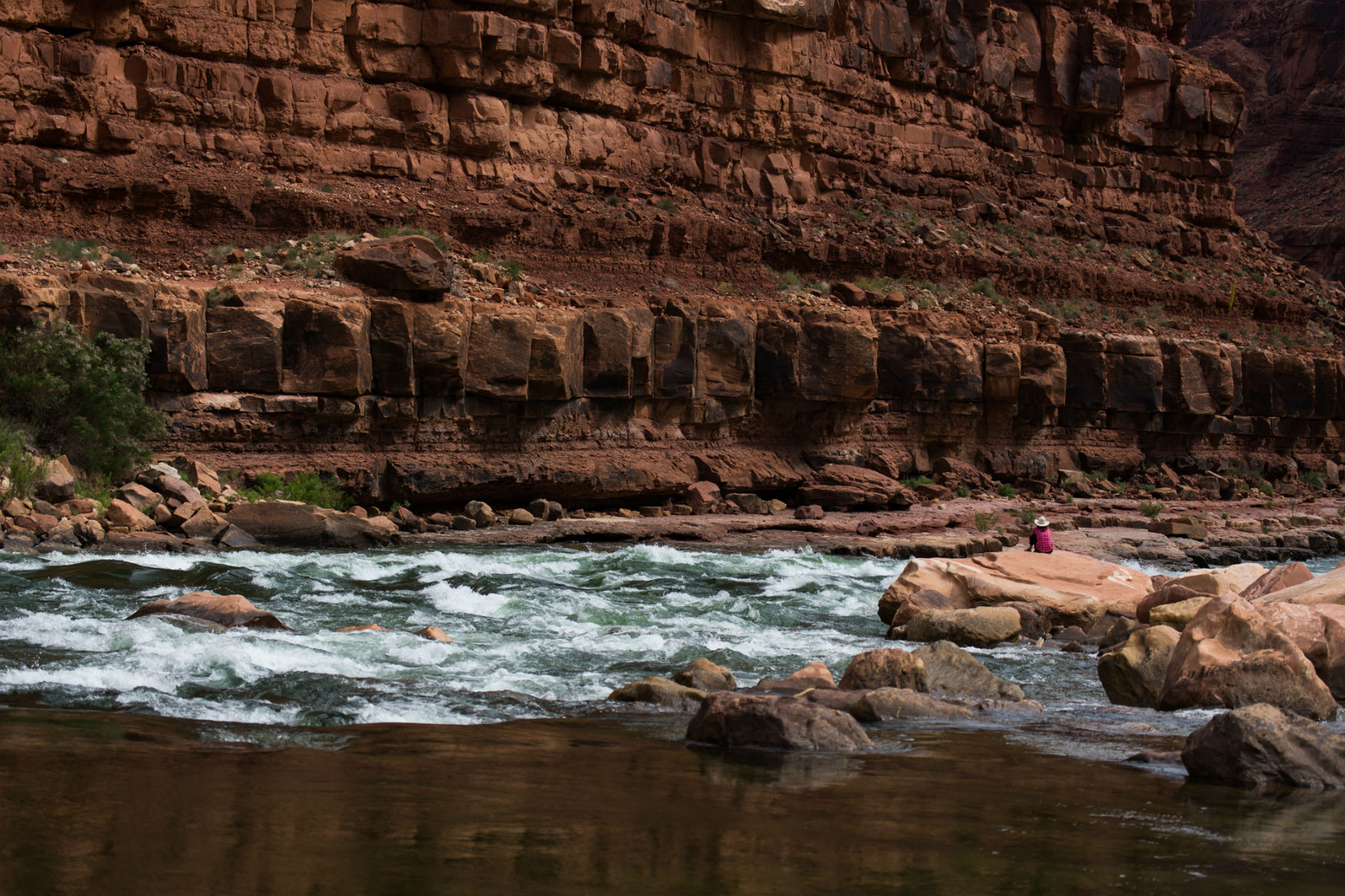 Perched atop that rock beside me was a teenaged girl from Boulder, Colorado, but really from Uganda, but really from Rwanda. Her Rwandan mother had been dead for twelve years. Her new mother—with her rock-climber body and bird-watching binoculars and Boulder-liberal politics—brought Sonia to Arizona to go rafting in the Grand Canyon, quite possibly against her will. Sonia had a different outfit for almost every day on this two-week trip. I cycle through the same three pairs of faded river shorts, saving my nicest pair for days when we run big rapids. I bring three long-sleeve shirts on the trip. Sonia’s seemingly bottomless bag of clean clothes made me self-conscious of my wardrobe for perhaps the first time in my career as a dirtbag river guide.

She took time in the morning to wash her face, match shirts to hats, to feel pretty. (When I was a fledgling guide in the Utah desert, fresh out of Alaskan high school and sweating all the time, I used to sing that song from West Side Story, I Feel Pretty, as I stumbled between rafts tethered to tamarisk trees, searching in vain for dinnertime onions for the red-faced chef who glowered from the beach above.) Sonia explained that it’s important to feel pretty. “You’re looking good, you’re feeling good,” she said. It seemed logical enough. 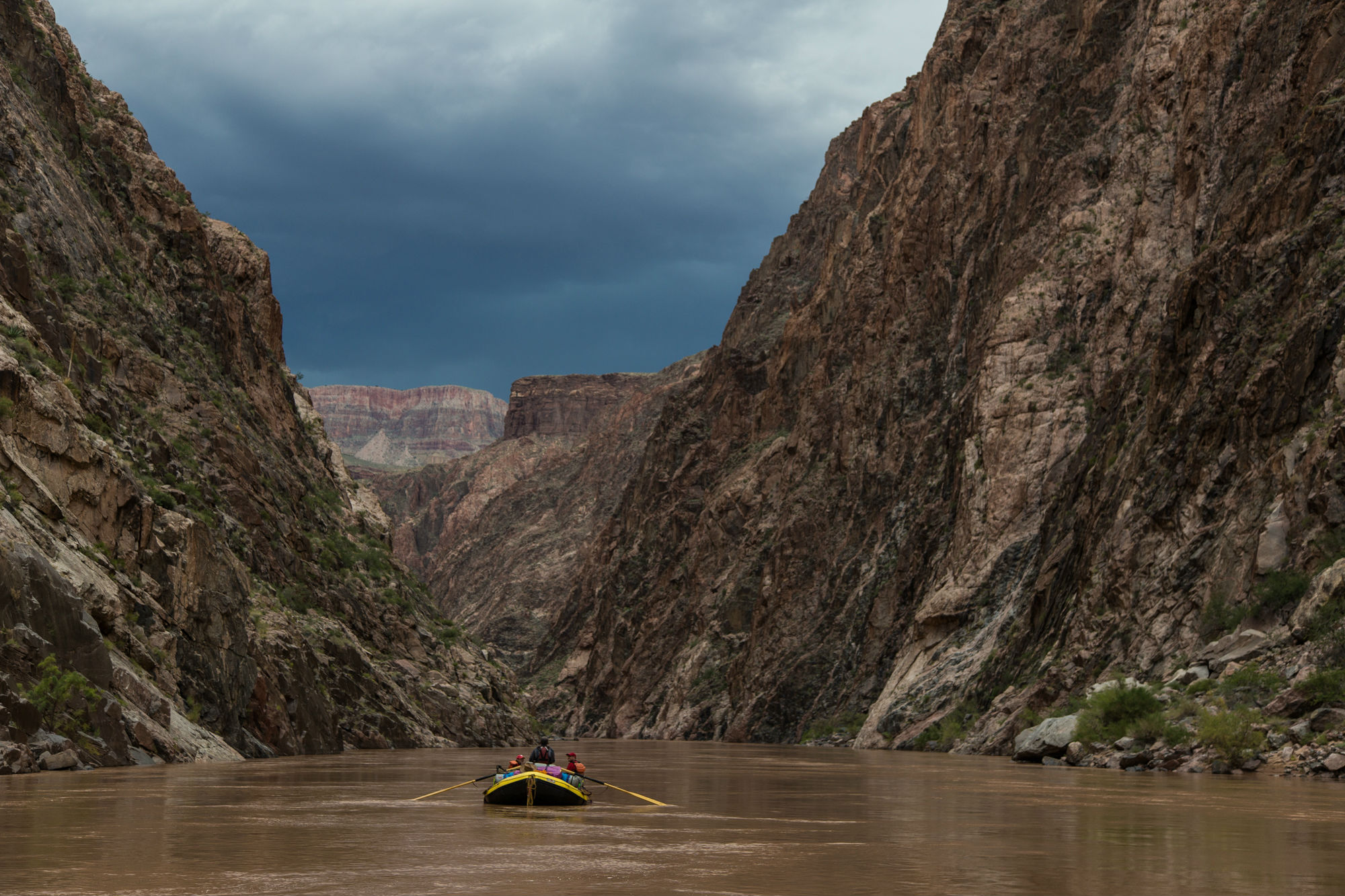 Sonia traded me French for Spanish. She’d write “Je t’aime ma cherie” in my open journal; I’d smile and tell her “Te quiero, también.” When we hiked she showed me how to move over rocks with more grace than I usually can summon on my own. In stretches of flat water she struggled for brief stints to row my two thousand-pound raft and then lounged like royalty on the front of my boat, a black and blue sarong draped over her African skin. “I’m tanning so much harder than you right now. Catch up,” she teased.

As we sat on that cottonwood-shaded rock, she drew the tattoo from my right shin into her sketchbook: it’s a dove on a wire, dangling a blank scroll from its toes. She said she wanted a tattoo someday, a waterfall maybe. “How do you draw a waterfall?” I asked. Falling water all around us, we lay still on the rock, careful to keep our bodies in the shadows of the foliage, shifting slowly if at all. 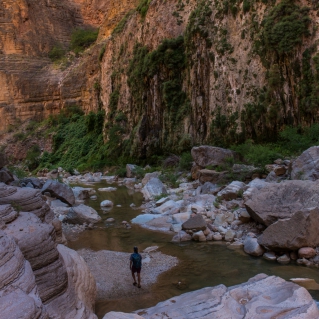 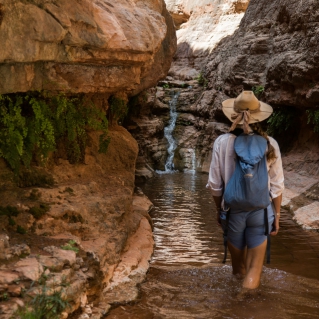 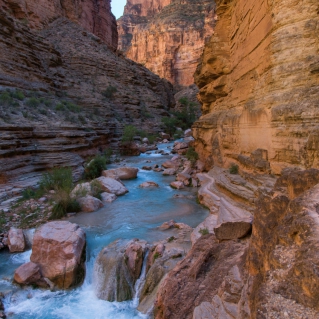 One day prior, on the scramble back to the river from an alcove called the Throne Room, a half hour’s hike past the Deer Creek patio, I slipped on loose dirt and fell. There was no exposure, no danger of tumbling much more than ten feet down the steep part of the trail. It didn’t hurt. When she heard me fall, Sonia, who’d been walking a few paces ahead of me, turned with horrified eyes and ran back, her arms outstretched and her face panicked. I giggled, embarrassed. She cried, also somehow embarrassed. And her tears didn’t stop for a while. After that, when we walked, she reminded me, “No falling.”

I try my best not to fall.

My feet were on fire, the spaces between them abraded and degraded by an unseen aggressor endemic to the tributaries of the Grand Canyon, a waterborne fungus informally dubbed “toe-lio.” As I soaked my feet in the cool, metallic water of Havasu Creek, I didn’t find the name funny or clever, as toe-lio had robbed me of several consecutive nights’ sleep. At bedtime I tried to ignore the toe-lio. I’d lie there and sweat and stargaze toward the Big Dipper—or part of it anyway—the handle just beyond the Canyon rim, just out of sight. 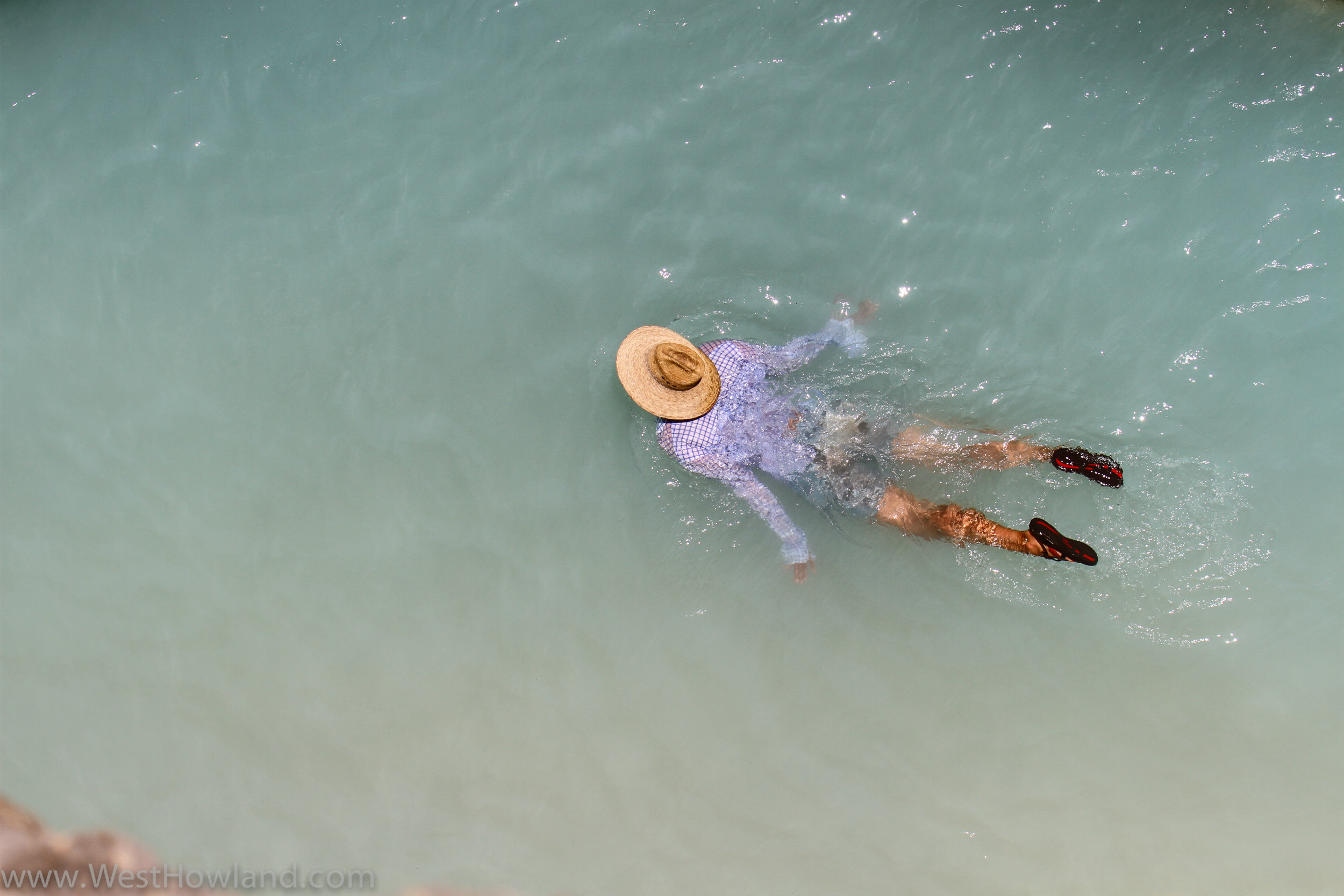 Sonia told me that after I slipped on our hike, after I clouted her with my characteristic clumsiness and she spiraled into worry, she had felt sick waiting for me to row my raft through the right side of Bedrock rapid that same afternoon. From the raft she was riding in, safely waiting in an eddy downstream, she had glimpsed the maelstrom that lies to the left of the cabin-sized midstream boulder; she didn’t want me to go there. She had tears in her eyes as she told me this. I had met this girl eleven days ago. 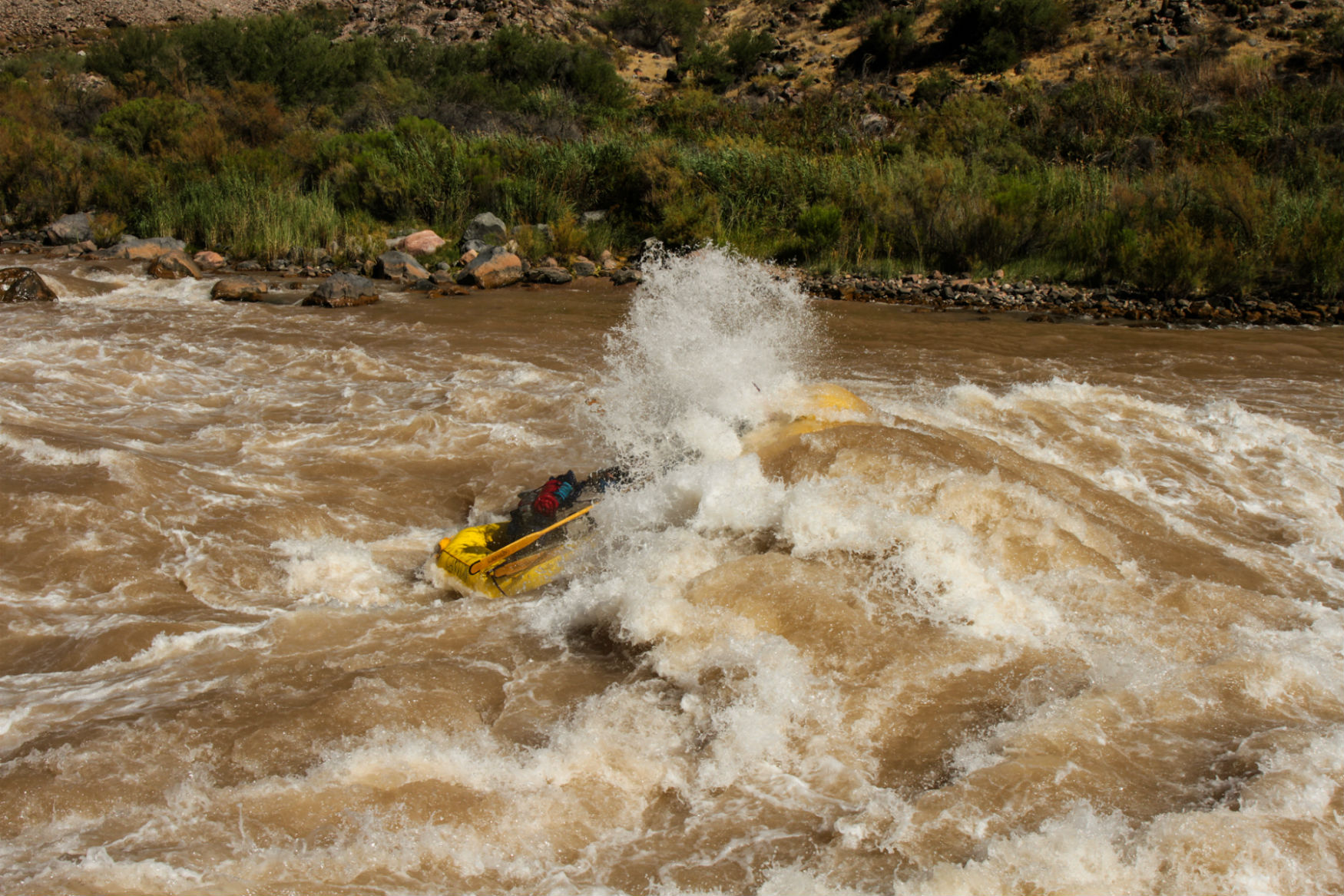 I told her then, after she finished her sandwich and I finished mine (accidental grilled cheese, iceberg lettuce and turkey heated to a soggy melting mess inside our backpacks), “We don’t have much time left on this rock.” The sun was creeping around and reaching under the shade tree. “We can’t stay here.”

“We’ll migrate,” she said. Her eyes were so wise it gave me chills.

In the little pool to our left: tadpoles, dark and strange against the white muck and calcium carbonate patina that stains the riverbed. Sonia, cooling her can of Coca Cola in the pool with the tadpoles, the red aluminum shining in stark contrast to everything around it.