The cold beer left a wet ring on the table as I sat taping the blisters on my hands between gulps. We were taking a quick break on the patio of No-Li Brewery in downtown Spokane, four hours into our second day of standup paddleboarding the Spokane River. My muscles were just starting to get sore, and I could feel a blister forming on the side of my foot. It was in desperate need of the moleskin I stashed in my first aid kit at the last minute (thank the Lord). Only 20 more miles to go for the day.

My summer had been the typical workweek routine with a few rad weekend trips mixed in when my husband, Jess, was in-between work trips. But one phone call changed the outcome of my summer entirely. Jed, a good friend of ours, invited Jess to standup paddle the Spokane River, an urban estuary that flows just below my office window. Jess couldn’t do it, so the open spot was tossed my way. I fumbled with a series of excuses: work and time and lack of skill and the dangers lurking in and around that river. Jess scoffed at the ease with which I could blow off such an opportunity, especially one right in our backyard. 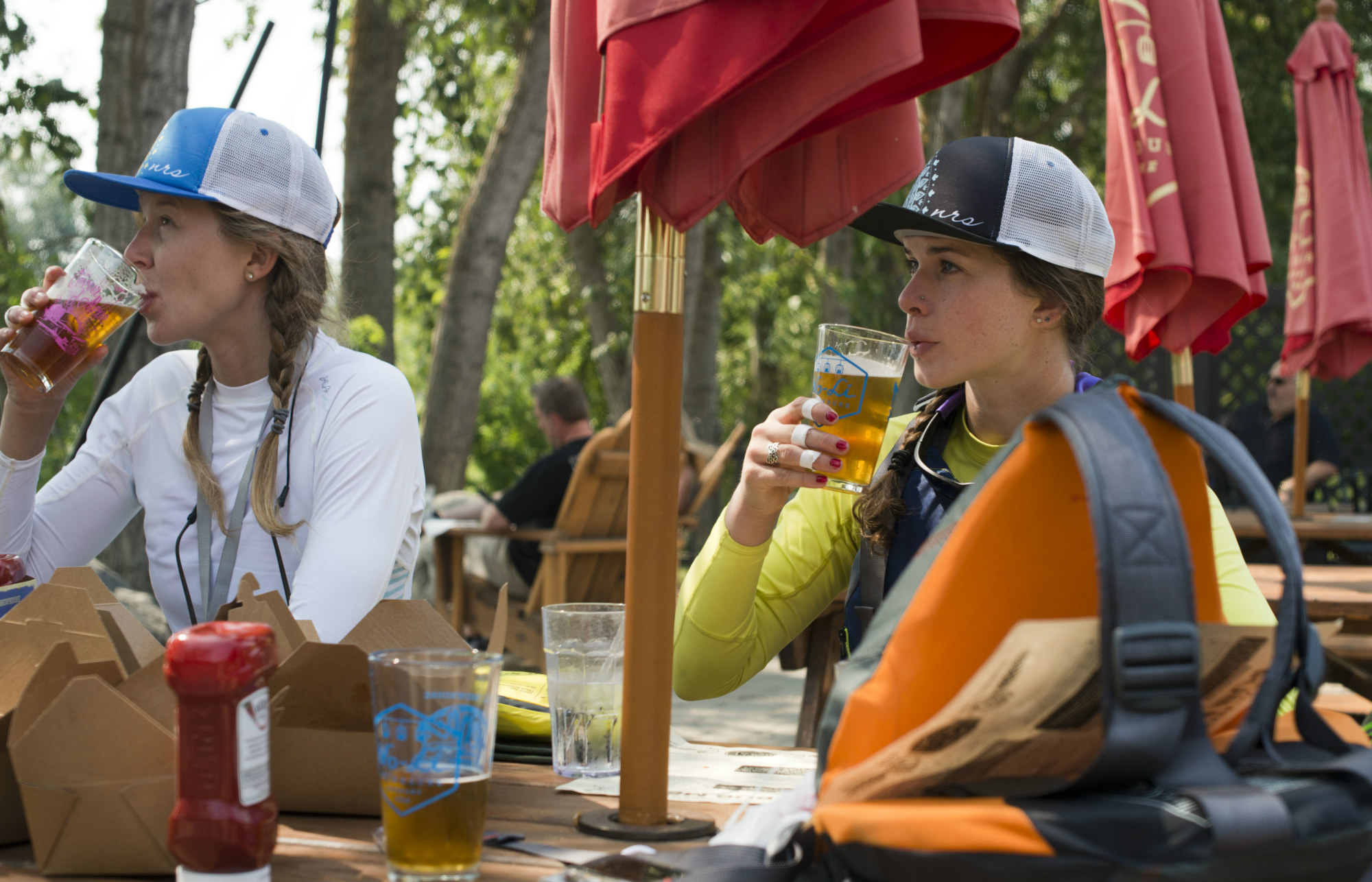 I grew up on a farm in Clarkston, Washington. My parents were very supportive, encouraging me to be involved in as many extracurricular activities as I could fit into my schedule. I was a busy girl, but when it came to getting out of my comfort zone and into more high-risk terrain, I had let my fear of the unknown hold me back from branching out. That is until I met Jess.

Jess started traveling the world as a toddler, which has given him a perspective on life that I had never seen before. His father pulled him out of college at the age of 20 to climb Mt. Everest, which says it all. He believes the meaning of life is to find your limit. And that limit is found through interactions that require a level of self-trust and mental strength that most people don’t know exist, generally because they allow their own fear to get in the way—case in point: me.

One long internal battle against my childhood safety net and my new yearning to become a strong adventure-seeking woman, and I decided I had to go. If I let fear guide my decision-making, I would never realize my true potential. 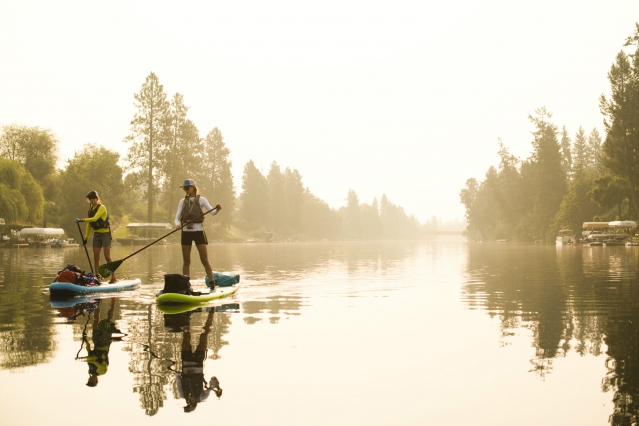 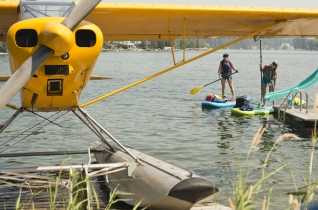 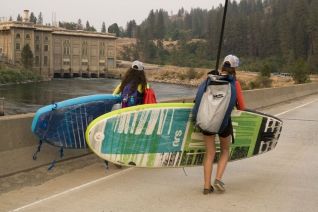 With three NRS inflatable paddleboards of various sizes—a Thrive, a Mayra and a Quiver—we hit the put-in, pumped up the boards and set off from Coeur d’Alene, Idaho. On that first day we paddled past mansions and manicured lawns, boat surfers and even one seaplane. My confidence grew stronger as we ticked off miles; the water had a steady current but remained flat.

Our first taste of whitewater came just below the Post Falls dam. The water levels were extremely low and the current was swift, making it impossible to navigate the board without the fin catching on what seemed to be every rock I passed. My childhood self made a quick appearance when my board got lodged between two rocks, the current testing my ability to stand on my own two feet.

My focus was torn from our objective and to the well-traveled road just above the riverbank. I could easily call an Uber and get the hell out of here. But I steadied my stance, stabbed the water with my paddle and when I couldn’t handle the pressure, I hit the deck and rode out the rapid on my knees. There were many times during the trip that I was scared shitless, felt weak, lacked confidence, doubted myself. We were in this together, but when it came down to pushing through, I could only rely 100% on myself to find the strength to figure it out. Thankfully my struggles were met with laughter and my successes with high fives and cheers. 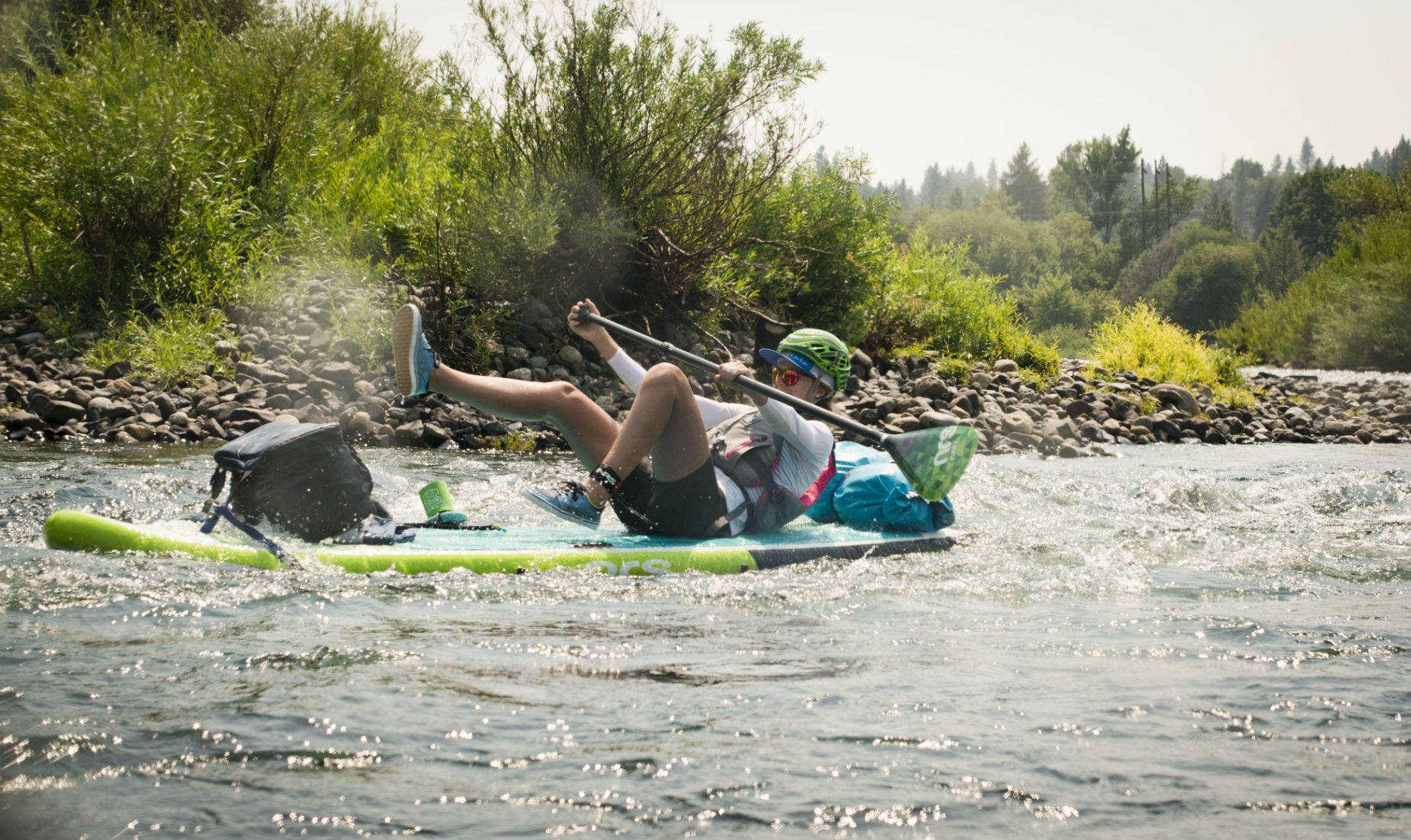 Our first campsite was at our buddy’s house, 28 miles into our adventure, which is ironically the daily mileage we had to log in order to make the trip in four days. We had pre-stashed burgers and beers and had planned to camp out in his yard, but when he invited us to stay inside, we accepted without hesitation. One major difference between urban and backcountry camping are these crazy things called humans. Being locked up in a warm house was a much more attractive choice than the vulnerability of camping along the river in the Spokane Valley.

By the second day, I was ready. Ready to portage dams. Ready to conquer the whitewater. Ready to paddle past my office and look up from this urban adventure and thank the universe I didn’t have to work today. Following our beer break at No-Li was the most enjoyable stretch of the entire river, complete with surfing through gnarly patches of whitewater, dodging a drunk bachelorette party on mermaid floaties, and a surprise visit from my in-laws who fueled us with kombucha and snacks.

Night two was another house stay at a buddy’s place on Long Lake, and by night three, the celebrations became shorter. We leveled our boards, pulled out our sleeping bags and fell asleep to the quiet lapping of the river against the shore. In the morning our blisters would be bigger, my ankles would be swollen and we would still have 28 miles left to paddle. 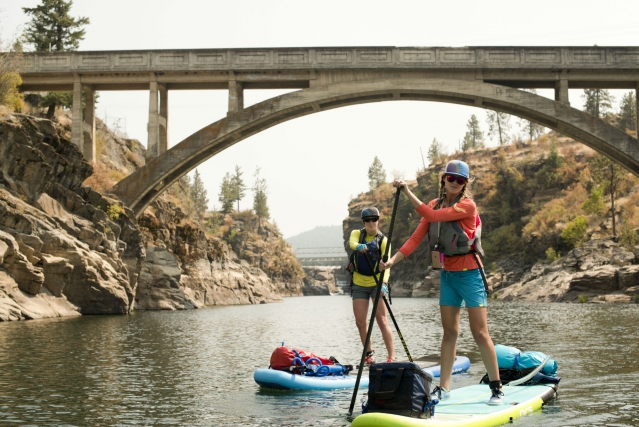 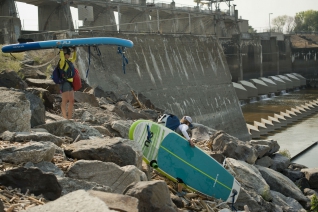 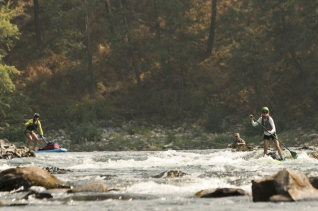 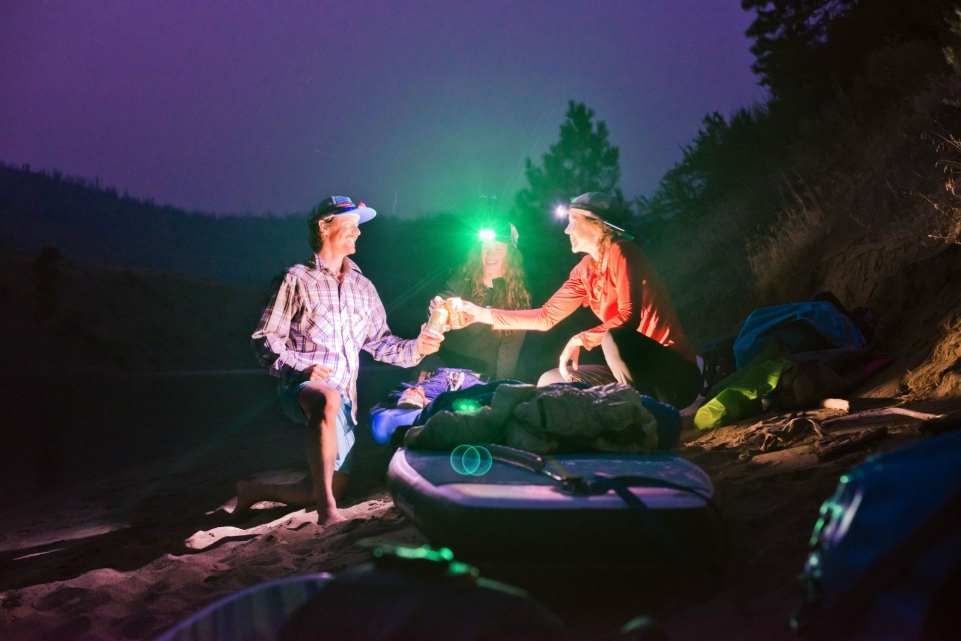 Your suffer bucket can only get bigger by exposing yourself to the unknown and, of course, suffering. And with that comes a whole new perspective on what you’re capable of and what this world has to offer—or, in this case, what your backyard has to offer. With a population of over 215,000 people, Spokane is a bustling metropolis in eastern Washington. But it’s such a unique place. A place with mountains to ski, trails to bike and this beautiful river to paddle. And it doesn’t require vacation time or permits or months of planning. It pains me to see people not taking advantage of the beauty and majesty of what exists in their own backyard.

Four days, 112 miles, and seven dams later we took out at Roosevelt Lake before hitting the Columbia River. We deflated our boards and rolled them into their packs—an advantage to inflatables that we truly appreciated, had we needed to deflate when portaging the dams. We learned that the Mayra was solid in flat water but struggled a bit in navigating whitewater; the Quiver dominated the whitewater but struggled to keep up in flat water; and the Thrive proved to be the best all-around option for navigating all varieties of water the Spokane River handed us. 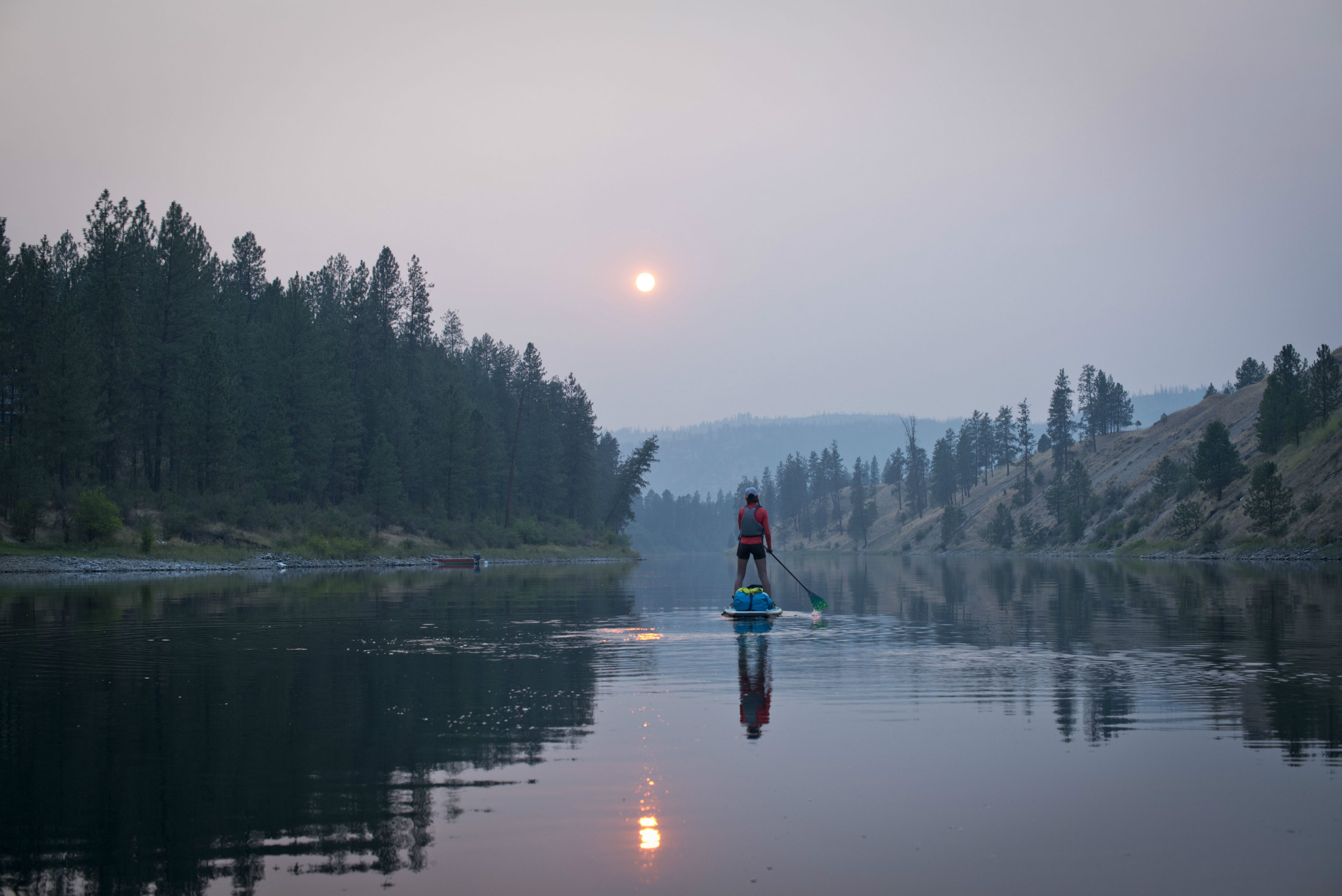 With way too many blisters to count, we completed the first SUP descent of the Spokane River. My suffer bucket expanded, my confidence grew, and I’m already dreaming of bigger adventures to come. Nelson Mandela said it well: “I learned that courage was not the absence of fear, but the triumph over it. The brave man is not he who does not feel afraid, but he who conquers that fear.” From fear of not having the skills to paddle whitewater efficiently, to the anxieties of urban camping, I used my fear to drive this journey and experience my backyard in a whole new light.

Editor’s Note: Guest contributor Allison Roskelley is a professional athlete with a passion for combining as many sports into one adventure as possible. A native to the Pacific Northwest, she lives in Spokane with her husband and two pups.

All photos courtesy of Jed Conklin. For more from this urban first descent check out Jed’s recap on SUP the Mag.