Imagine doing month-long canoe expeditions for a living. The river is your office, a paddle the tool of your trade. Survival and navigation your day-to-day tasks. Now imagine the year was 1670. North America was a wild continent, and Europeans were exploring Canada—the resource-rich northern region known as New France—in search of furs to send back to Europe. Traversing the New World by canoe, these men were called the coureur des bois, which literally means ‘runner of the woods.’ Predominantly of French or First Nation origin and sometimes referred to as voyageurs, they paddled and portaged across the continent acting as middlemen in the fur industry. Negotiating trade between Aboriginal groups who hunted and trapped the beaver, otter and fox, and the European businessmen waiting in ships on the east coast,coureur des bois had to be hardy and resourceful. Businessmen yet survivalist. 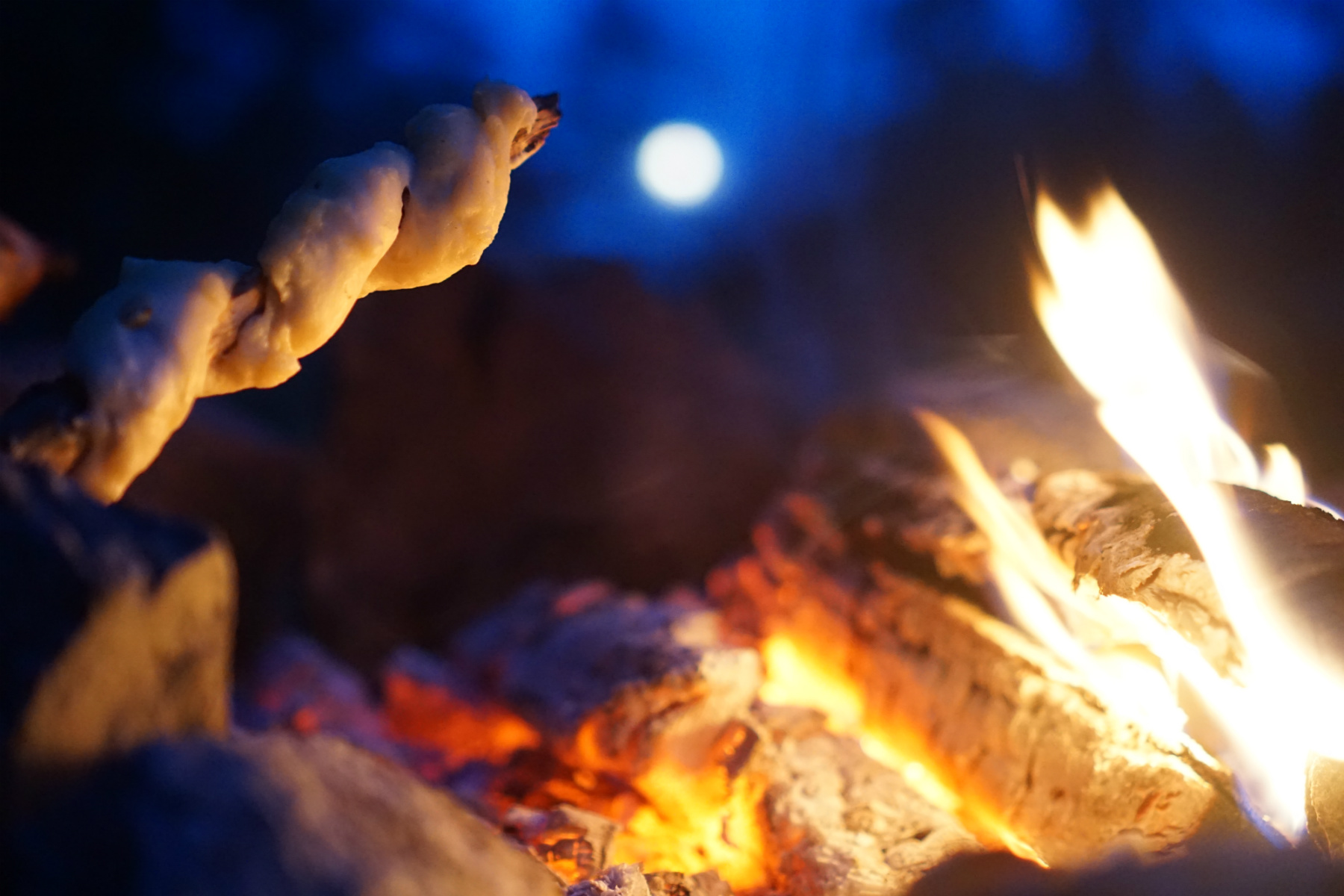 Back then, there were no water-repellent or moisture-wicking modern fabrics. No dehydrated, vacuum-packed expedition food. Just your own wits and skills. Food was fuel and meals had to be fast, efficient and calorie-packed. Time tested and trail tested, I tried making some traditional Canadian voyageur meals, to see if they could fuel my days on the water as they had for the gentlemen of the fur trade some 350 years ago.

Bannock, Pemmican and Rubaroo were basically the bread, energy bars and soup that powered these lads. Paddlers today will love them for the same reasons the fur traders did; all three recipes require simple ingredients, are quick to prepare, and provide easy calories and lots of protein.

Eat a piece of history. Cook like a Canadian voyageur! 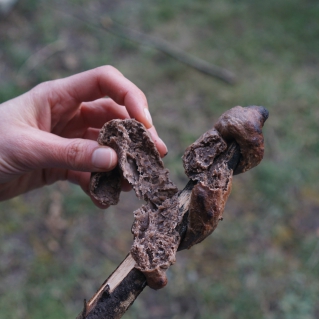 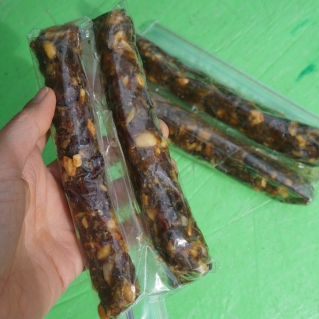 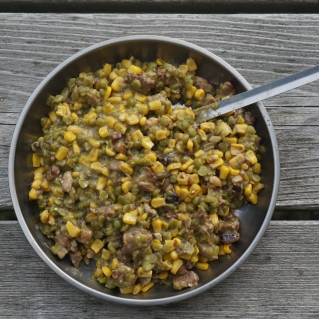 BANNOCK Sweet or savory, this yeast-less campfire bread is quick to cook, requires just four ingredients and makes a great carb addition to any meal.

I grew up eating bannock on family canoe trips and later it became a coveted treat on longer expeditions. As a kid I was fascinated by the history of the bannock and today I loved how simple it is to make. This dense, flatbread originates from Scottish roots and was introduced to the First Nations during the fur trade days. Traditionally made with wheat or oat flour, the bread had a long shelf life and provided a source of carbohydrates, which were hard to come by in the Canadian woods. Some of the indigenous people who adopted it replaced the European flour with native flour made from plant roots and tubers.

Bannock can be wrapped around a stick and cooked over coals or baked flat over the fire on large stones or cast iron pans. I prefer roasting it on a stick rotisserie-style and when I’m front-country camping I’ll even wrap bacon around it. It’s a quick and easy campfire food and makes a great snack while dinner is being prepped or used for dipping in soups and sauces. 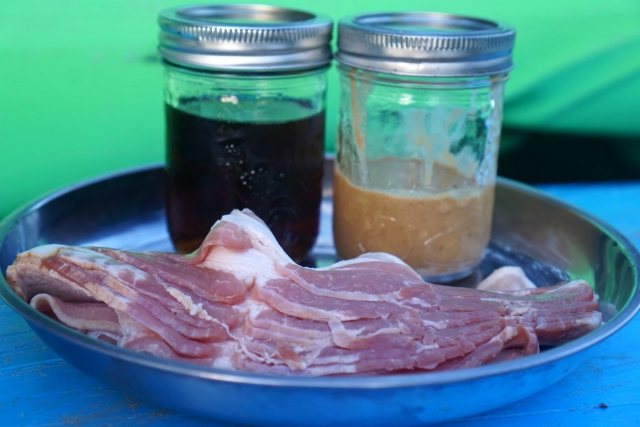 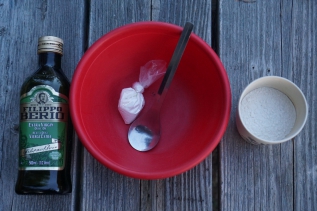 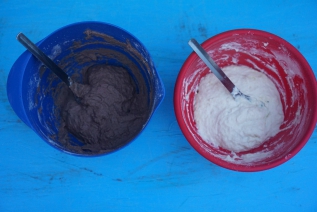 Instructions Mix together all dry ingredients. Add oil then slowly add small amounts of water until a firm dough is formed. You don’t want it to stick too much to your hands or the bowl. Let the dough sit for 30 minutes then rip off a chunk and roll it into a sausage. Wrap the dough around a stick and place into the fire. Rotate over coals until golden brown and cooked through. Enjoy by dipping in soup, nut butter, maple syrup or jam.

Variations You can make a more savory Bannock by adding oregano, basil or salt and frying it in oil or bacon grease. For a sweet treat add coca, sugar or hot chocolate powder or dip in maple syrup or nut butter.

Pro Tip I always try to mix the dry ingredients pre-trip for quick prep. And if you’re on a grueling expedition, try adding in protein powder to up the paddle power calories. 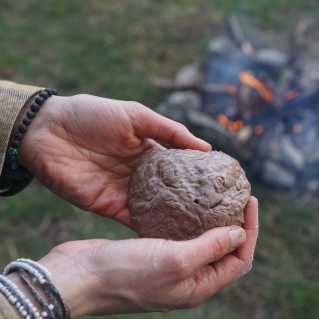 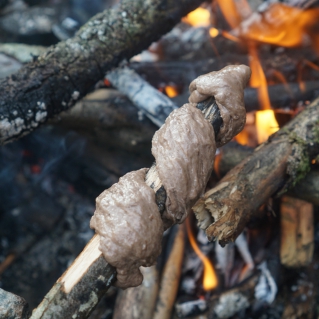 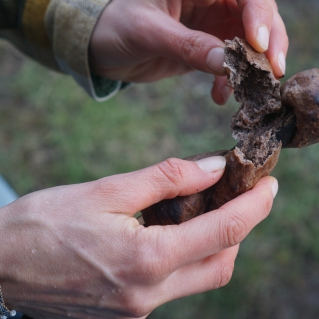 Voyageurs were on the go all day, so staying warm and well fed wasn’t just about comfort, it was about survival. However, unwrapping a Clif bar just wasn’t an option.

Contrary to bannock, pemmican has Aboriginal roots and was adopted by European fur traders in the 18th and 19th centuries. The name pemmican is thought to derive from the Cree word for ‘rendered fat.’ Traditionally, fat or suet (rendered lard) was used as both the binding agent and key calories for this original energy bar, which typically contained dried meat (beef or wild game), dried fruit and rendered fat. But there are endless variations to this wilderness power food.

First Nations people would substitute ingredients for what was local, in season and readily available. The same goes for modern day pemmican. Dried elk, deer, moose, caribou or bison might not be available at your supermarket, but beef or turkey jerky will be. Switching up the dried berries can change the flavor and add essential nutrients like iron and vitamin C. Try cranberries, cherries, currants, chokeberries, blueberries, and even dates. Essentially, pemmican can be made with the leftovers in the bottom of your food bag! Get creative with ‘untraditional’ ingredients, such as seeds, honey, maple syrup and spices. I added in chia seeds and hemp hearts and tried cayenne in a batch for a spicy snack, which somehow brought together the mix of nut, berry and meat flavors. 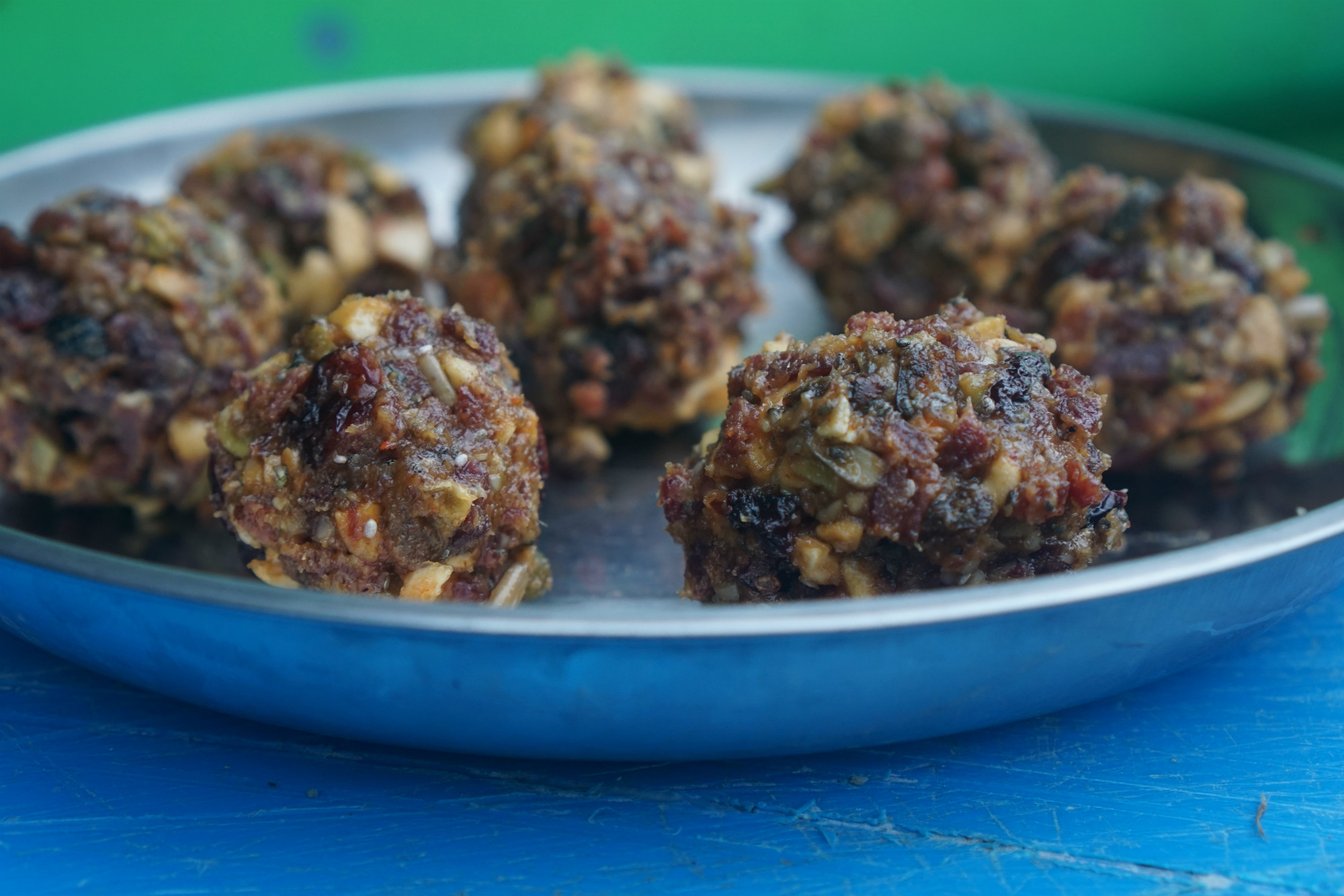 As a recovering vegetarian, I used peanut butter rather than suet to bind my pemmican. Nut butter won’t hold the ingredients together as strong as rendered suet but the accessibility and trail-friendly nature of peanut or almond butter suits today’s trippers much better. Want to go the traditional route? Most local butchers will be able to provide suet, or buy the animal lard yourself and reduce it at home. Using suet will increase the shelf life of the pemmican and when prepared properly, the coureur des bois would have bricks last for several months to several years without refrigeration!

In an attempt to make my pemmican truly trail friendly, I selected the most basic ingredients and tried out a number of ways of storing the bars. Voyageurs would make bricks but I tried balls, bars and sticks. We took it on an overnight on Vancouver Island, British Columbia and all eight sticks were devoured within two days. 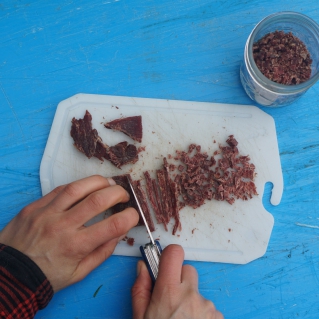 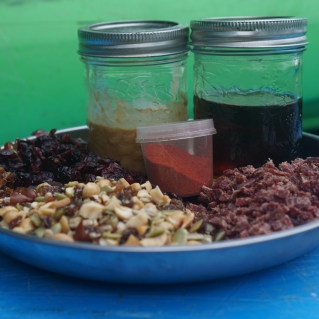 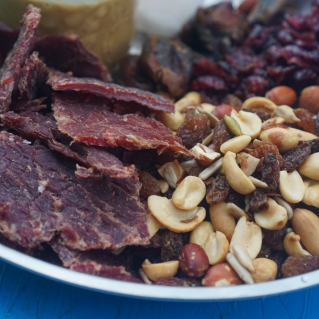 Instructions Grind, chop or pound the jerky into small pieces or ideally, a mealy powder. Add the dried berries, seeds or nuts. Heat the maple syrup or honey, peanut butter and cayenne (over the fire or a burner) until its thick and gooey. Combine wet and dry ingredients. Cool the mixture then form into balls, bars or sticks. Store in a dry place.

Variations Add in wheat germ, molasses and even fish oil to jack up this already hearty recipe. It’s easy to sub in different ingredients just be sure the consistency stays dry enough that it holds its shape and wet enough that it binds.

Pro Tip If you make your pemmican at home, pre-trip, put it in the freezer to help the ingredients bind. 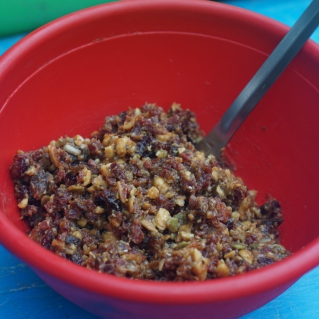 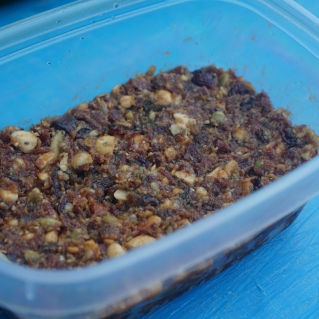 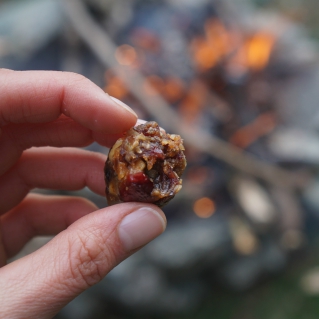 RUBABOO Warm your hands and bones with this thick and filling, traditional trail stew. It’s a rudimentary one-pot meal, guaranteed to deliver a full belly as you climb into your sleeping bag.

The origins of the soup are hard to determine, but it’s thought to be a collaboration between First Nations people and Europeans. Based on the ingredients—pemmican and flour—it’s very much a survival food and literally a blend of European and First Nations cultures.

Specific recipes vary across Canada but at its base, this traditional soup is made of bear grease, bread chunks, peas, corn, and flour. Sound pretty rough? When times were really tough and stocks low, coureur des bois would just boil pemmican in water and add a thickening agent (usually flour or peas). Fear not, with a few modern tweaks the stew can turn into a tasty and steamy fireside pick-me-up. 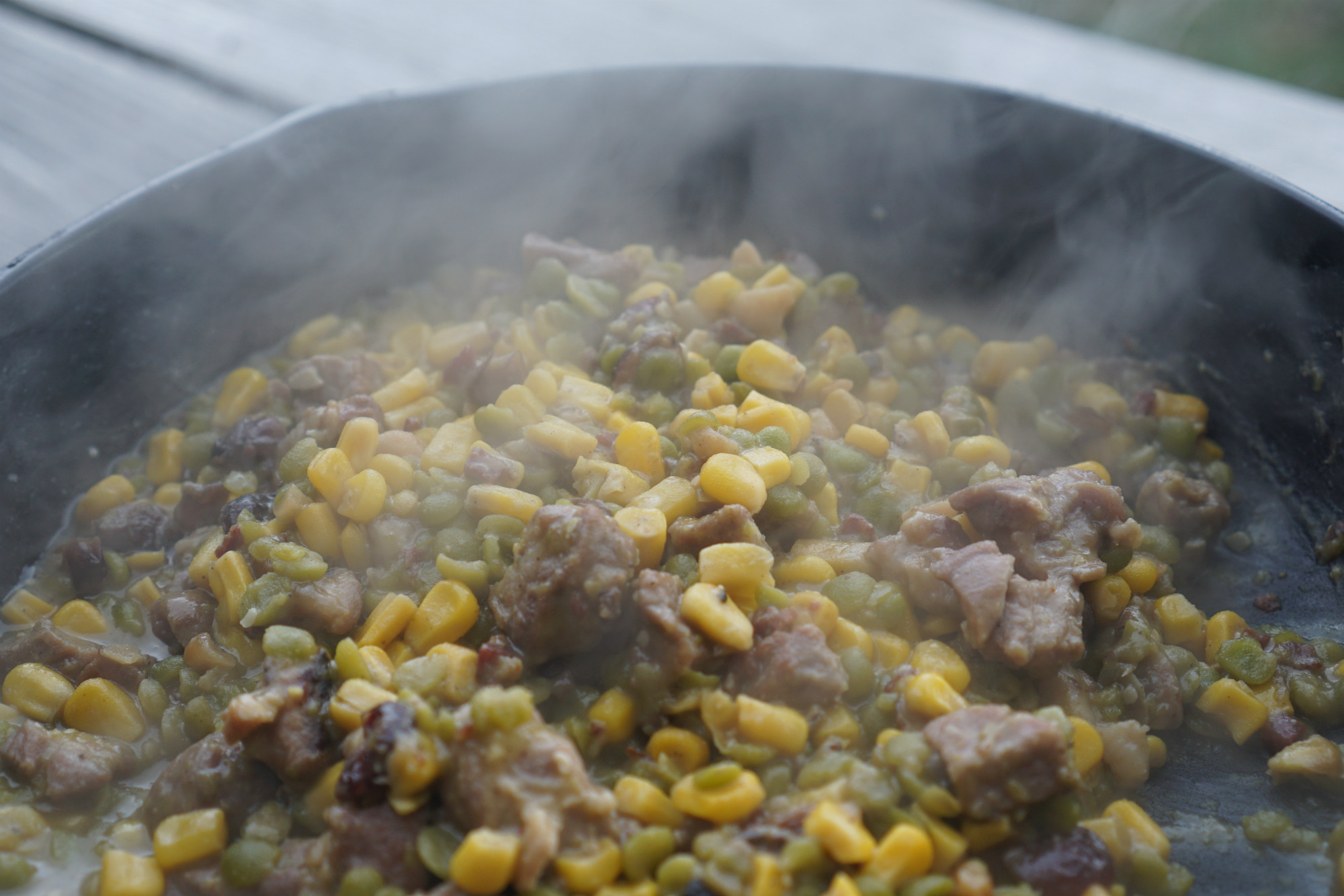 I made Rubaboo over a single burner stove on a cast iron pan with some additions to the bare-bones recipe. I subbed in a quarter-pound chunk of pork butt (a fatty, rich shoulder cut), but tried to stick to traditional ingredients as best I could. Many recipes use rabbit or pork in the stew. Go your own way, just be sure to select meat that will last a day or two unrefrigerated and plan Rubaroo as one of the first meals of a trip.

From prep to plate my variation took about 30 minutes to cook and yielded two solid sized bowls. The stew had a thick porridge-like consistency and we ate it for dinner dipping fire-toasted bannock in it. Rubaroo provided sustenance during tough times in Canadian history and can fuel the modern outdoor man and woman too. 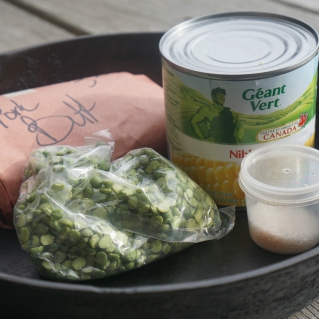 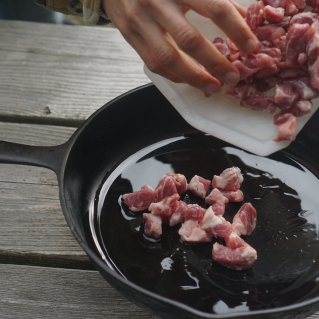 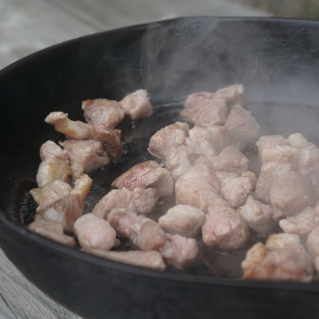 Variations Onions, potatoes and carrots can be added and salt or spices for seasoning. Add in some TVP (textured vegetable protein) if you want a vegetarian Rubaroo. Use what you’ve got. Add in veggies or condiments that you travel with. 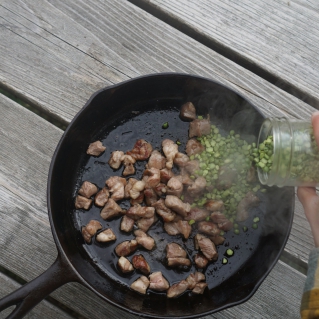 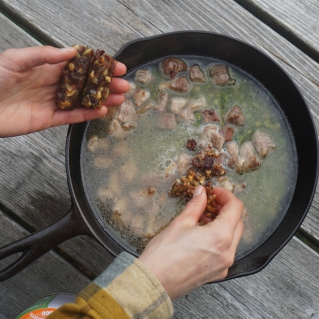 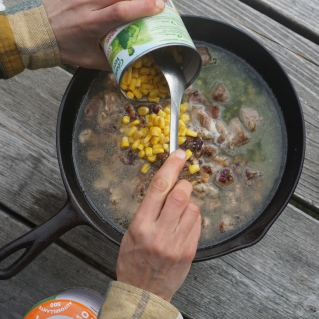 Canadian voyageurs depended on these three foods as a shelf-stable, high-energy fuel for long days outside. Their goal was exploration, business and survival. Our goal is exploration and fun. Make food and history part of the experience.