From Kayaker to Canoe Racer in Three Days

Our canoe cuts through the glassy water, and I lose my count of paddle strokes in drooling over the fairy-tale waterfall we glide past. Glaciated mountains stand sentinel over the crumbling vestiges of the old Big Bend Highway that punctuate the shoreline along this sublime stretch of the Columbia between Mica Creek and Revelstoke Dam.

It almost makes me forget that my shoulders are on fire from paddling frantically, I’m sick of counting to ten over and over, and I’m thirstier than I’ve ever been in my life while also desperately needing to pee. 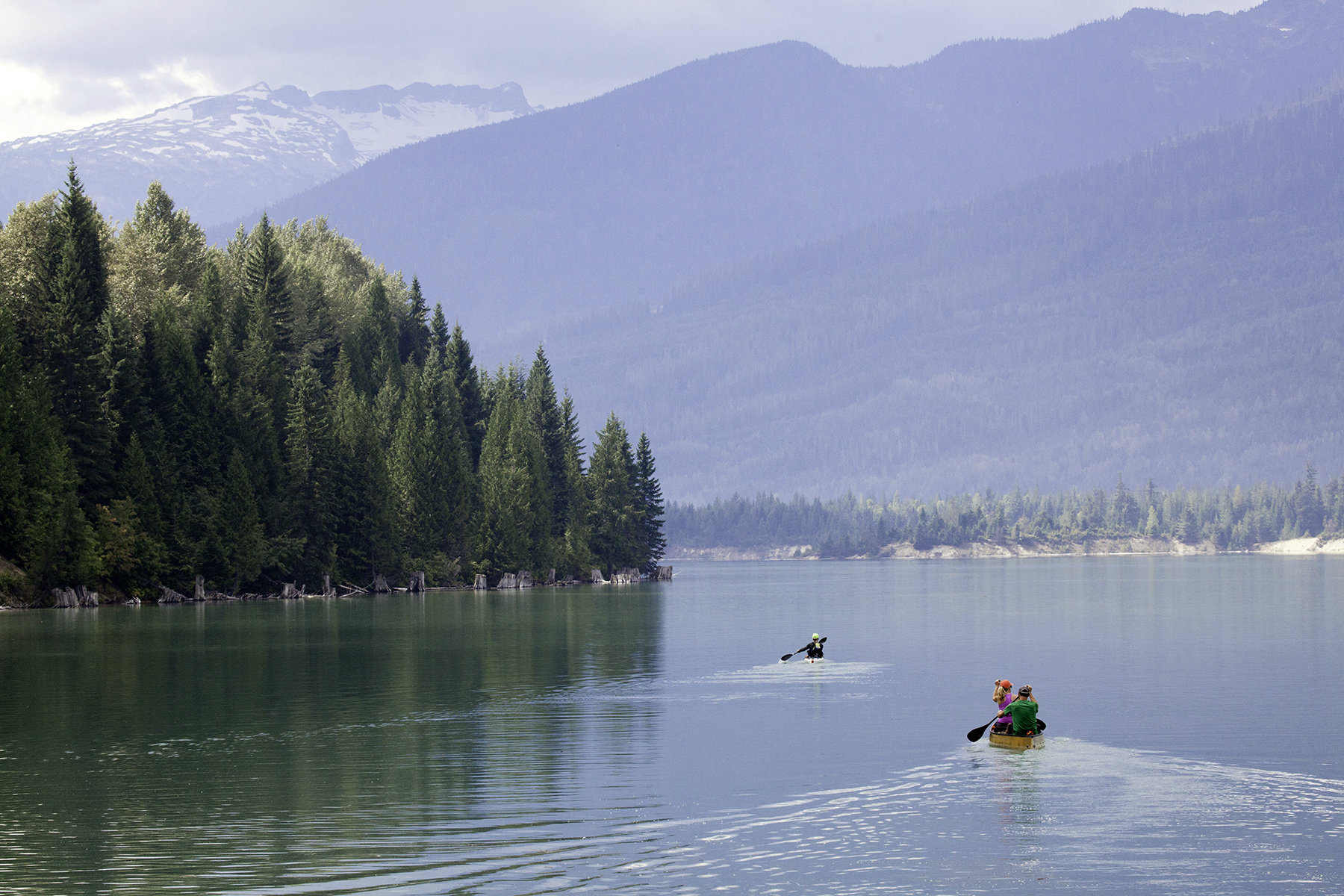 I decided at the last minute to participate in the first-ever David Thompson Paddlesport Classic. Organized by 82-year-old canoe legend Bill Pollock, it’s the longest paddle event in British Columbia at 125 kilometers with six portages over three days.

There were just two hitches: One, I’d only known my teammate for 72 hours, and two, I’d never raced a canoe.

To sort out the first hitch, my pinch paddle partner Nathanael and I met for beers to make sure we wouldn’t kill each other in a canoe for three days. He’d been thinking about entering the race, and when I sent out feelers for a partner through the local paddling network, he jumped on the opportunity.

Neither of us had spent much time in canoes, but I’d been paddling packrafts and rowing fully-loaded rafts on whitewater for years in the Pacific Northwest. When I moved to B.C. I started kayaking. I asked Nathanael about his paddling experience, and he said he was pretty comfortable in a kayak as well.

The next day, I watched him run a series of big drop class IV rapids at the Jordan River Fest in Revelstoke and decided he was clearly over-qualified for flatwater canoeing. 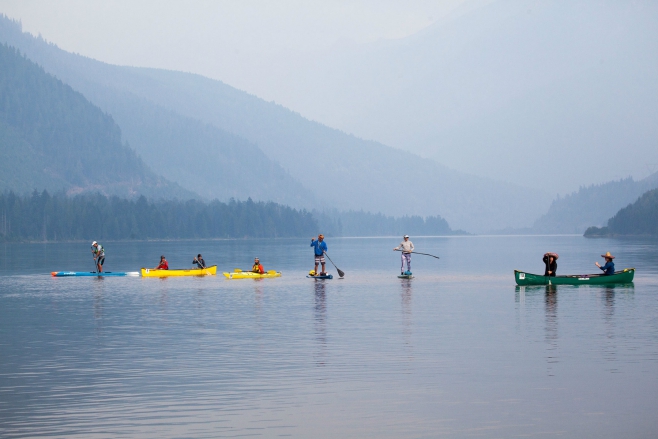 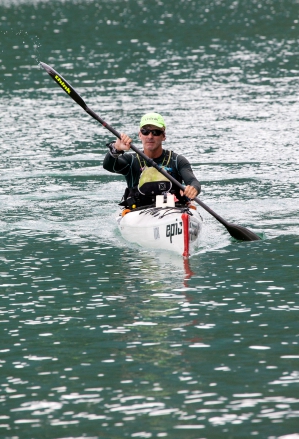 Between our combined boating experience and the added bonus of our borrowed lightweight racing canoe, Nathanael and I developed a bit of well-intentioned cockiness. How hard can flatwater canoeing be? we joked. What if we could WIN this thing?

Then we showed up to the put-in at Mica Creek the morning of the race. There were only six other canoe racing teams, and all of them actually had racing experience—some with upwards of 20 years of it. We watched the first wave of SUPs and recreational boats take off, and mentally took stock of our formidable competition left in the racing wave. Our cockiness ebbed as we lined up loosely on the water at the start line, waiting nervously for Pollock to blow his whistle.

At 83, Pollock is a venerated whitewater and flatwater guide and decorated racer. He’s paddled the Adirondack Canoe Classic 20 times, placing in the top three in his class 14 of those, along with racing the Raisin River, Jock River, and the General Clinton. Earlier in 2017, he’d founded the Revelstoke Paddlesports Association to bring the dispersed paddling community here together. He masterminded the David Thompson, from conceiving of the idea and designing the course to leading the behemoth logistical effort to make it go.

In short, he’s something of a legend in the paddling world. 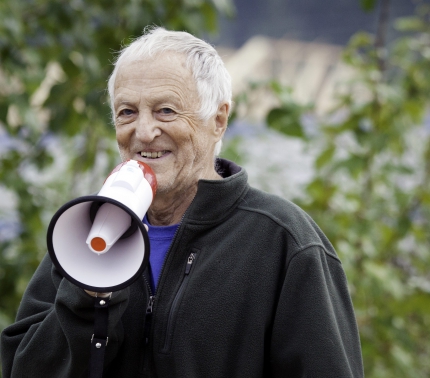 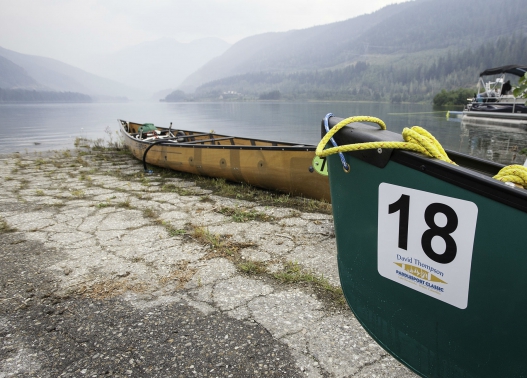 Pollock blew his whistle to signal the start, and Nathanael and I took off in a burst of mediocrity. We were immediately left in the wake of the real racers, confused as to why our effortful paddle strokes weren’t yielding more distance, while sort-of-politely and definitely-unsuccessfully offering each other totally uninformed advice for troubleshooting.

Our second mistake was not treating this like a race. I’ve done my fair share of long races, from adventure races and bike races to running relays, and I should have known to treat hydration and food seriously.

We learned in canoe racing, there’s no time to scratch your nose, let alone root around for the water bottle that slid somewhere just out of reach, screw it open, pour it desperately into your mouth (missing most of it), screw it closed again, and toss it somewhere in the bottom of the boat—just out of reach for the next time, obviously. And unwrap a granola bar and eat it? Forget it. We longed enviously for the real racers’ sophisticated hydration systems with long tubes that went straight to their mouths, filled with powdered calories. Our assumption that flatwater canoeing “wasn’t that hard” was quickly coming back to bite us. 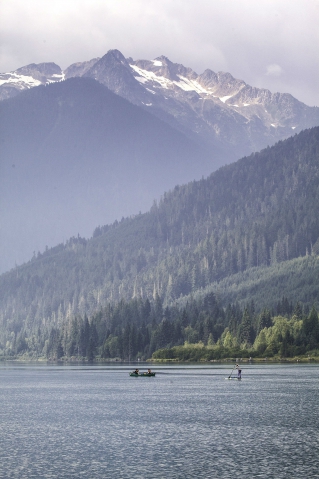 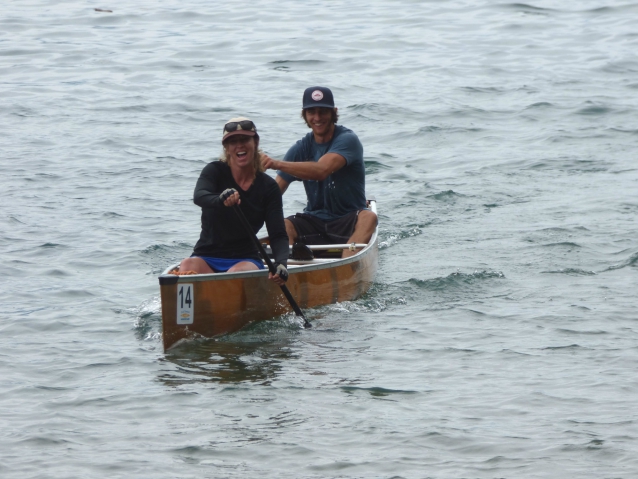 But then we hit the first portage. Nathanael hoisted the canoe over his head, I gathered our paddles and gear, and we ran. Turns out portages were our strength, and the only time we actually passed other racing teams. We became scarily adept at unwrapping granola bars one-handed and shoving them in our mouths as we sprinted, miraculously avoiding aspirating on crumbs.

The obvious question arises, “Why would you need to portage on a lake?” First, any excuse to get out of the boat on a 125km race is totally welcome (for me, anyway). Second, Pollock designed the course to follow the submerged Columbia River, with its twists and turns before the twin dams flooded what we were paddling between.

The Big Bend Highway, the original Trans-Canada before the iconic route through Rogers Pass was built, was flooded along with the river. The portages ran on ruined stretches of the Big Bend, rising from the waters for brief stretches for our mad dashes before plunging into their glacial depths again, where we’d take flying leaps into our canoe and resume our less-than-impressive paddling. 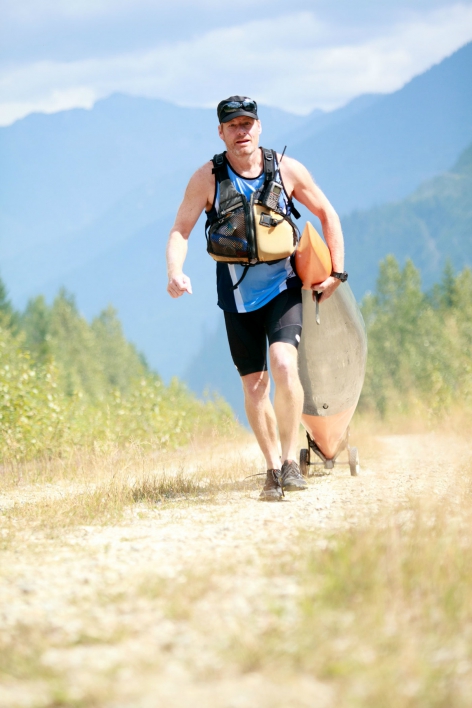 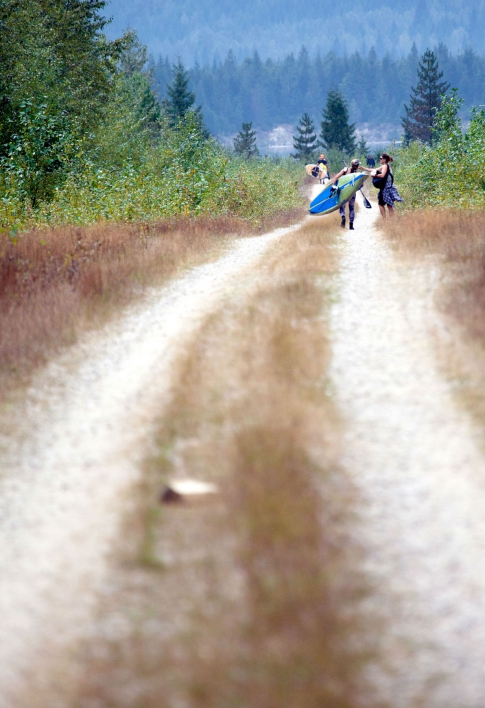 We labored into the finish line at the end of day one through a monstrous headwind. Pollock was there to greet us, seated in a camp chair with a bullhorn, his white shock of hair illuminated in the late afternoon sun. We joined the other racers in cracking beers and tossing ourselves into the cold lake. The long light of August faded over our communal campsite on the quiet water as we traded stories and food.

The next morning, a pair of veteran racers took pity on Nathanael and me. We gratefully accepted their tips for how to brace our feet and use our cores, strong from kayaking, to lend our strokes power and give our screaming shoulders a break. We improved marginally that day, gratefully accepted more tips that evening at camp, and then, finally on day three, we hit our stride.

Yes, we’d finally learned to paddle correctly. But the biggest advantage? We were the only team of Revelstoke locals, and we knew this last stretch of lake close to town like our own backyard. We passed Martha Creek like it was a religious sign, and sprinted all-out for the finish at the boat launch. We even beat two teams that day (to everyone’s shock, including our own). 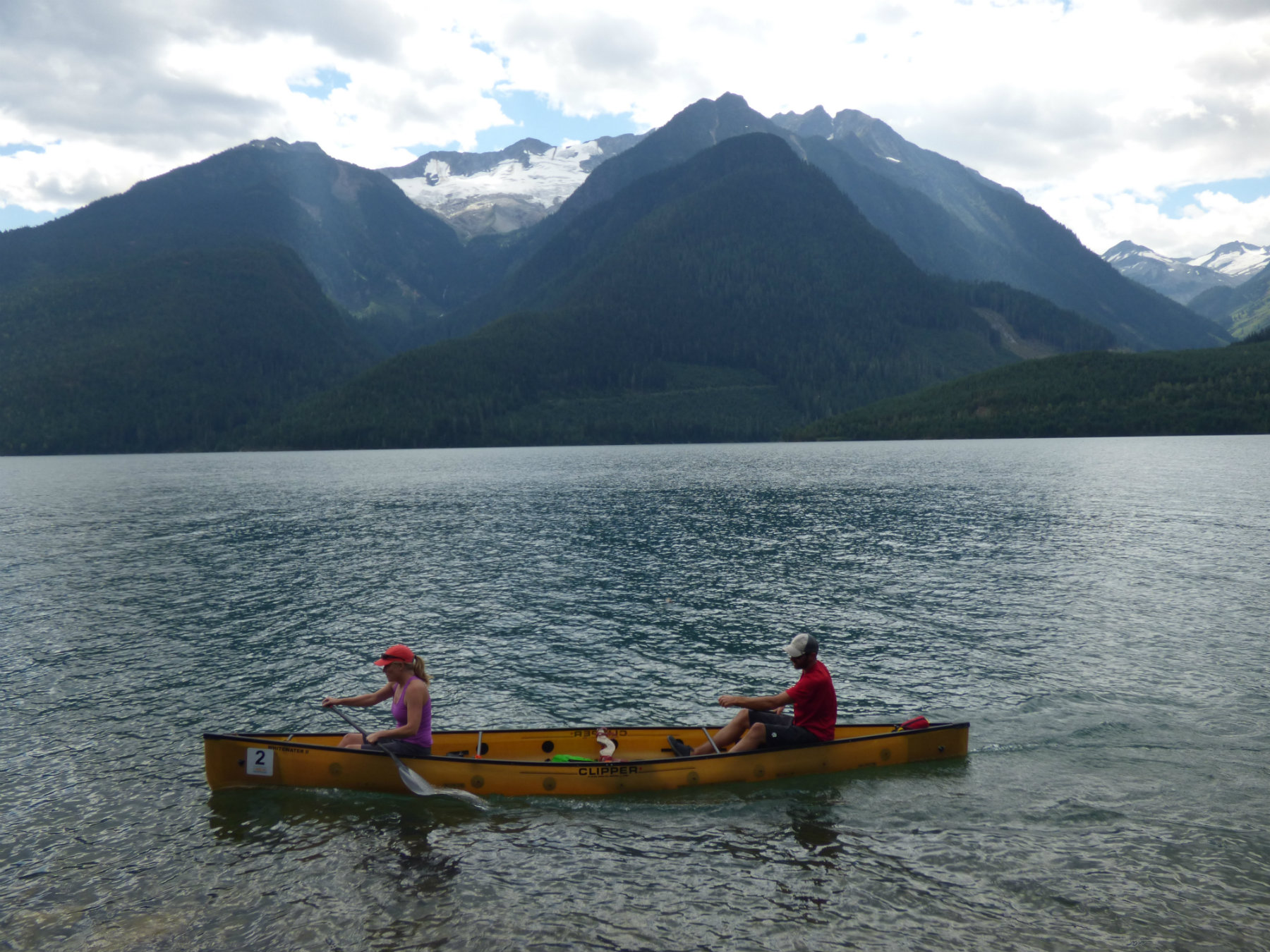 So the moral of the story is, if you’re new to canoe racing, always let your paddle partner carry the boat on portages. And make sure to practice eating several granola bars while sprinting.

But really, at the end of things, it became clear that it was never really about the competition. It was about gathering at the finish line of each day for congratulations and commiseration on sore bodies. It was about watching the sun set and rise on the mountains marking our progress together. Whooping for each other at the finish line, we realized that canoe racing was as much about the adventure with the people who became our tribe over those three days. Which, turns out, was Pollock’s intention all along in organizing it.