The Healing Powers of Water

Each day brings us closer to September. This is true of all of the eleven months that are not September, but in the waning days of August, the Septesqueness infuses certain moments. A better time is coming.

August, with its noise and smoke, brightness, heat, and too many tourists, is already being tempered with cool dew, autumn thoughts and quiet moments. An alder leaf, summer brown, twists and falls in a cool zephyr.

Salmon by the millions ride the floods to the big river, to streams and estuaries, to Rocky Mountain lakes hundreds of miles away. They swim deep, well hidden from a guy in a silly little boat on the surface. That’s me. I know that the schools are there because it is that time of year. A few days ago, just up the channel, a seiner caught over 15,000 sockeyes in one set. 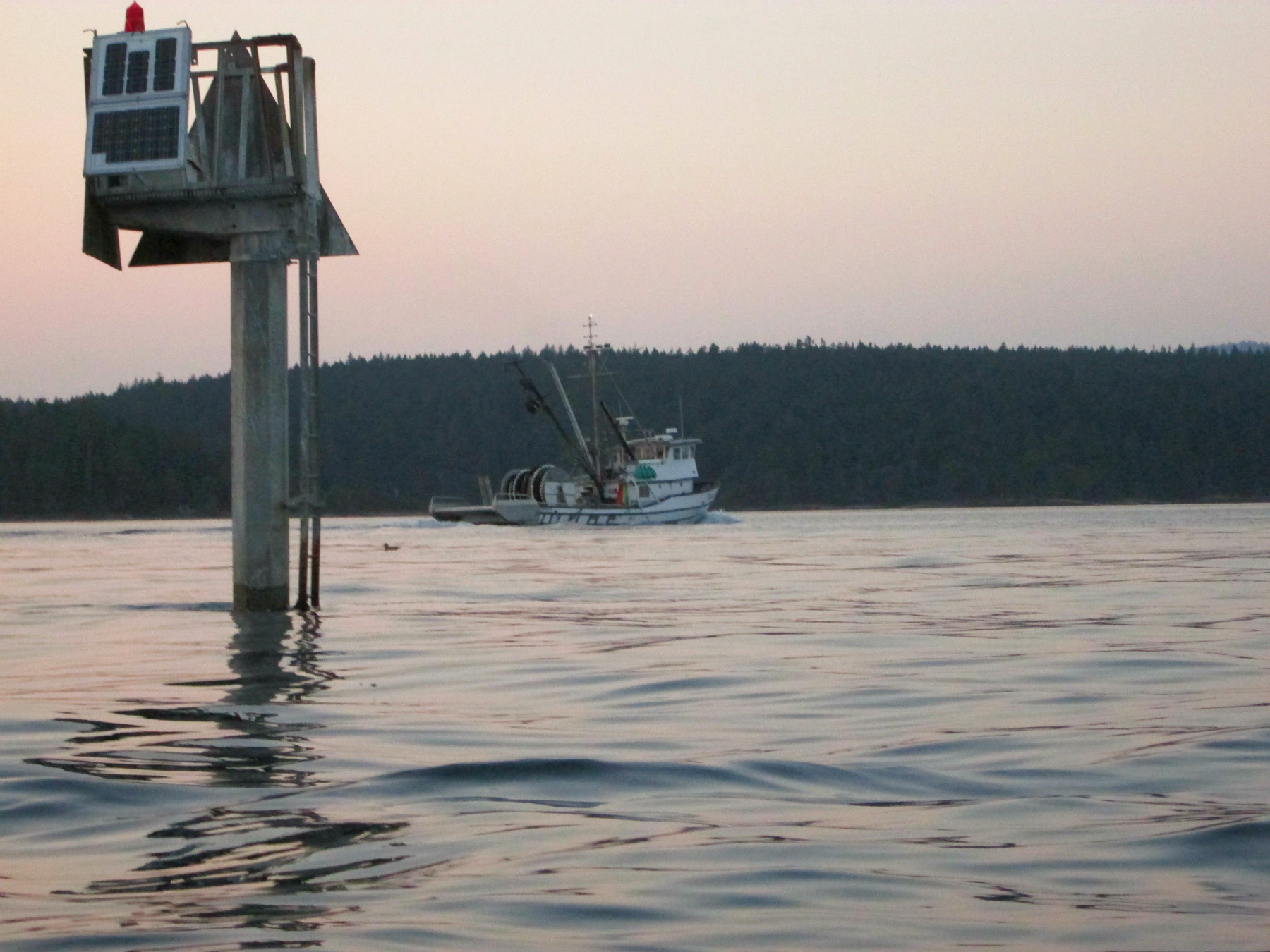 I, too, am working the tides and winds, seeking favorable momentum. Unlike the salmon which run these waters to spawn and die, I spawned over 16 years ago and run these waters to live, to build strength with each paddle stroke, with each deep breath of good marine air. Paddling is part of a path back toward life after a steep and terrifying slide toward death.

I set a goal of circumnavigating my home Island over the course of the summer. A former me, before my hipbone eroded to the point that it fractured without any fall or dramatic event that I can recall. Before stepping outside into a cool breeze gave me a chill that took a while to recover from. Before I questioned whether I would run a river or hoist a backpack again. Before all of that—before I was a cancer warrior—I would have ambitioned to complete the circumnavigation in maybe three or four legs.

Now, I’m happy to be capable of a couple hours of slow paddling followed by some downtime at the homestead. I substitute patience and cleverness for brute strength, as pushing past pain and exhaustion is not an appropriate tactic. My immune system needs my energy, which means exercising without using up scant reserves and replenishing with frequent rest, food and water. Several of my allies in healing have told me that abundant, pure water is key to restoring my health. 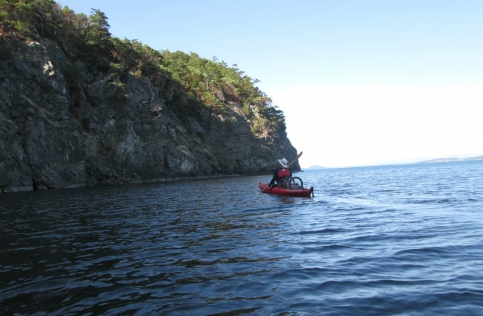 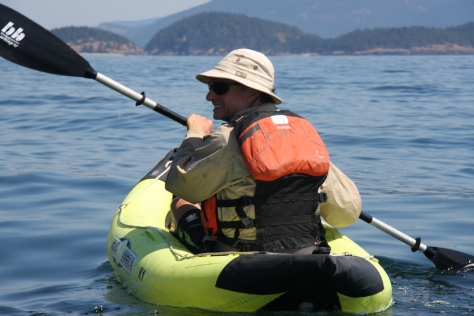 Before, I would have thought nothing of hoisting a heavy, plastic boat on and off the rig, and down and up the beach. I would have insisted on using a longish boat, narrow of beam, something that could go to windward. Now, I have “Bob,” a relatively cheap inflatable kayak. It is short, light, very buoyant, more beamy than sleek, comfortable, stable, and not what I want to paddle into a headwind. Bob is an unlikely boat for circumnavigating the island, but it excels at loading and unloading from the Suburban and portaging, two key advantages when taking on a forty-seven-nautical-mile journey broken into eighteen or so legs (the miles of vehicle shuffling, I don’t care to calculate).

There’s no linear order to this circumnavigation. I’m not going clockwise, counter-clockwise, or in any sequence. Just doing whatever works for the tide and wind conditions at hand. I’ve circled the island by sail and by powerboat. I’ve paddled or sailed or skiffed or walked certain stretches of shore many times. I ‘ve never been all the way around by kayak, which offers a more intimate connection with the coastline, a deeper learning of something that I thought I already knew.

There are wild rock outcrops, little channels between near-shore rocks, tiny pocket beaches in otherwise inaccessible shorelines. There are small surprises, some with big significance, like Purple Sea Stars. I’ve seen them a few at a time, just below the surface, or caught above the tide hiding in rock crevices from hungry gulls. They’re returning after being wiped out for a few years by a wasting disease. Bull kelp is resurging with them, as the sea stars eat the urchins, which eat the kelp. The kelp hides the little fish and the big fish. It provides a handy anchor to a sea kayaker who needs a break from paddling or drifting. Orca press against the kelp beds fishing Kings. 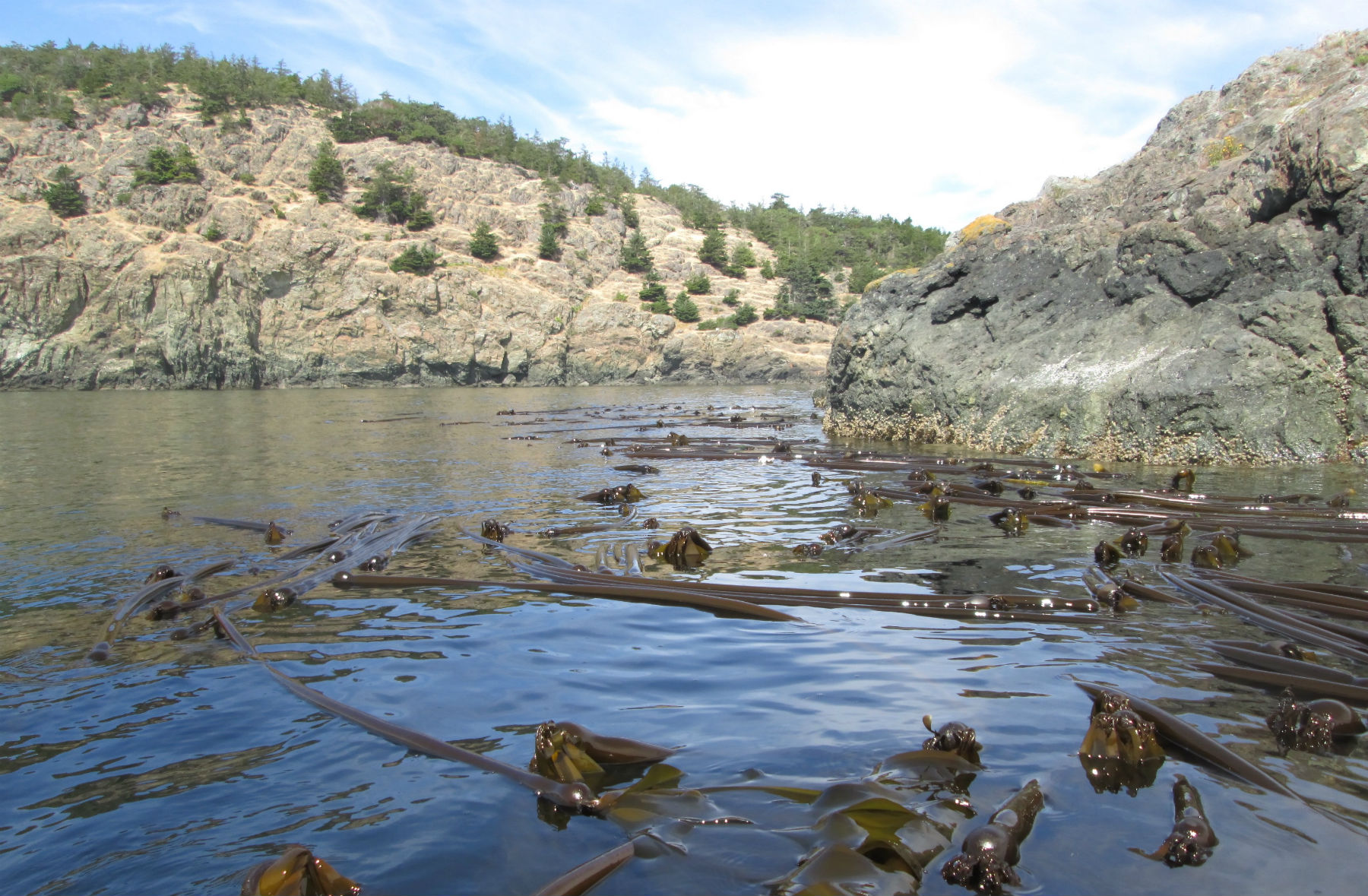 There are times the sea feels empty. No signs of life, no herring balls drawing in hoards of gulls, no seals breaking a salmon’s back on the water’s surface, just clear, cold water and empty sky. It can all change with the turn of the tide, bringing schools and flocks and pods, seals, sea lions, gulls and eagles fishing and scavenging. The people come too then, following the action, fishing, cruising, and relentlessly chasing whales for love and lust and money. We above all other creatures are noisy.

By twilight, the roar of boat engines mostly subsides. I chose this time to paddle the busier waterways. Sunset and moonrise; brilliant reds, oranges, pinks and purples give way to a silvery glow, phosphorescent vortices spin off of blade tips, schools of tiny fish scatter from under my skimpy skeg, lighting the sea with cold flame. Seals breathe loudly, hidden in the night.

Friends and family have paddled with me for every mile of the journey. It has been great to have the company, and a good safety factor, especially the first several legs when I was still pretty weak, fresh off the couch and blinking my eyes like a small child staring in wonder at the world. My companions have been on paddleboards and kayaks, including an electric powered kayak, which reminded me of just how slow Bob really is. SUPs have been easier to keep up with. On one leg, the strong but favorable wind and tide-driven waves pushed and pulled us along with a joyous surfing feeling. It challenged the standing abilities of my paddleboarding companion but gave us water-induced Perma-grins. 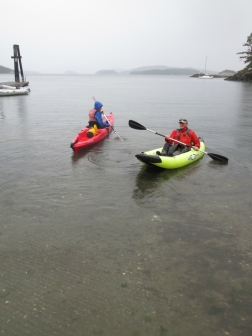 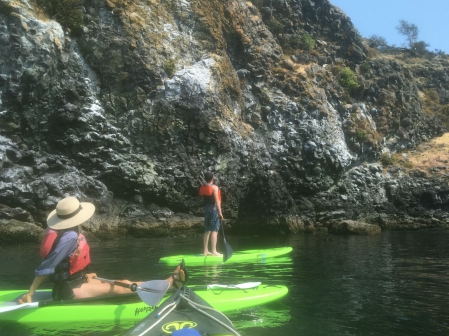 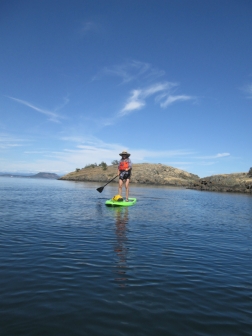 Paddling with my wife and son has been a great joy. To share with them some of the beautiful little stretches of the Island’s coast, creating memories to place in their own inner Island maps. It’s a small, but lasting thing I can give them after a long season when I didn’t have much to give.

For the last leg, I paddled a friend’s 16-foot sit on top, still on the slow and stable end of the kayak spectrum, but faster than Bob, a straight tracker and able to make way to windward. Chris and I enjoyed a mostly open channel between the kelp beds and the convoluted rocky shore. Drizzle came and went from a sky more silver than grey covering the sea with diamond sparkles. No rainbows, but a constantly changing tableau of light and cloud and sea. A “Northwesty” day, soothing and comfortable to those mossbacks who cringe and melt in the summer’s excess.

It was calm enough to venture into a couple of narrow, low ceilinged sea caves (sealunking?) where I stowed the paddle on deck and used hands on rock to provide propulsion and steerage. They were cramped and dark and reeked of otters, but irresistible detours nonetheless. Too narrow to about face, I backed out the way I went in, watchful to keep the rudder off the rocks. 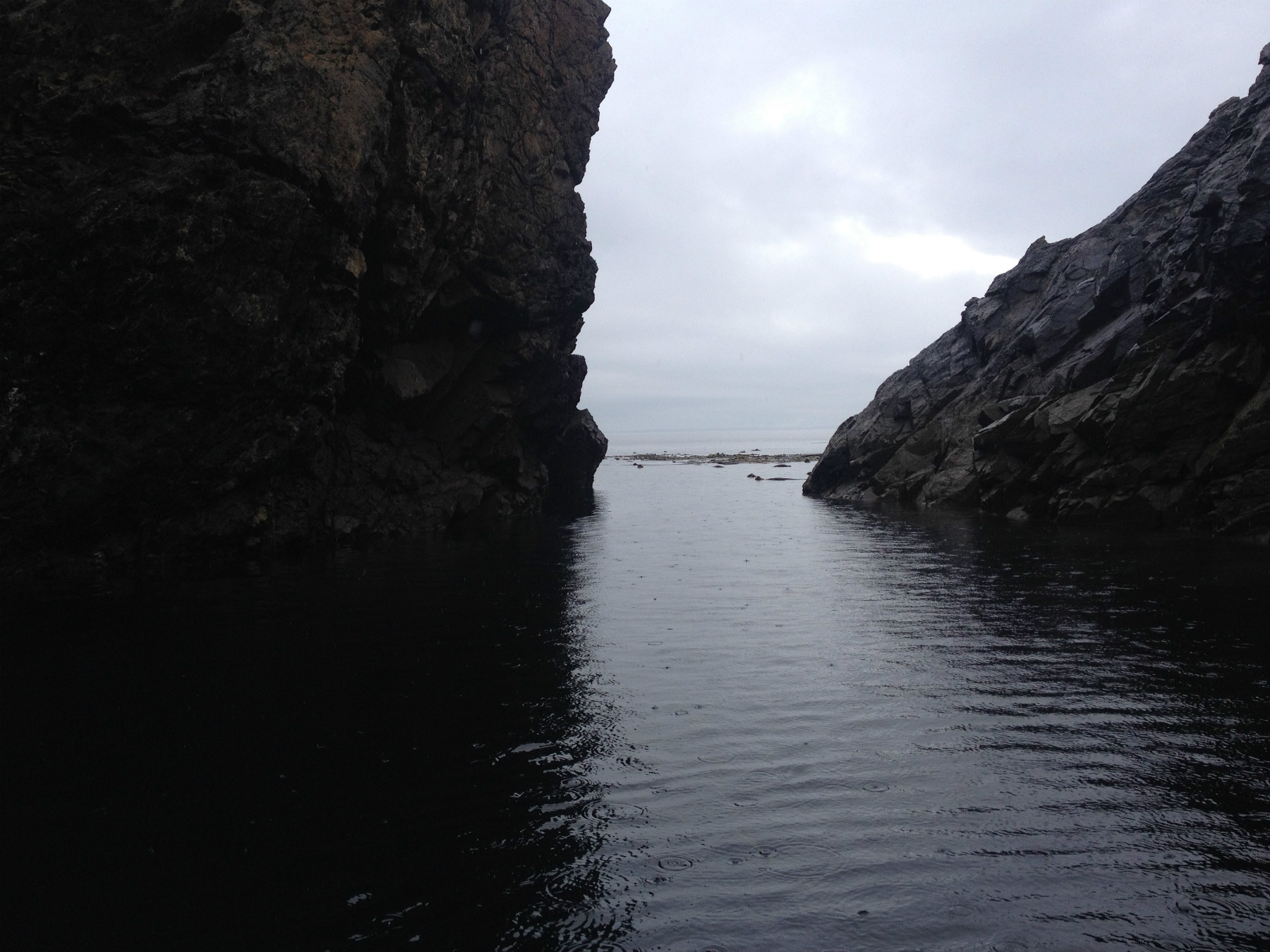 We passed the site of a bygone reefnet gear where twenty-some years ago we had fished for salmon. Chris was a partner in the gear; I was crew for a summer. These waters are full of memories.

A couple of weeks before our paddle, Chris had been walking along this shore and seen thirty resident Orca just off the edge of the kelp. Slightly sideways from their usual haunts, with twilight approaching, they were free from the paparazzi, witnessed by this sole person unobtrusive on the shore. These endangered neighbors have weighed heavy on my mind as I paddled our shared waters. They suffer from hunger, from poisons, from our unending racket. They, too, know what it is to have a precarious hold on life.

In August, about 100 Islanders gathered on the beach to pay our respects to the family of an Orca calf who had died shortly after birth. The grieving mother had pushed this calf around for 17 days before letting it sink into the depths. A cry out from the Salish Sea itself. A tribal leader from the Swinomish People spoke and sang at the gathering. He was clear and concise. He said that this is a problem with how we take care of Water. 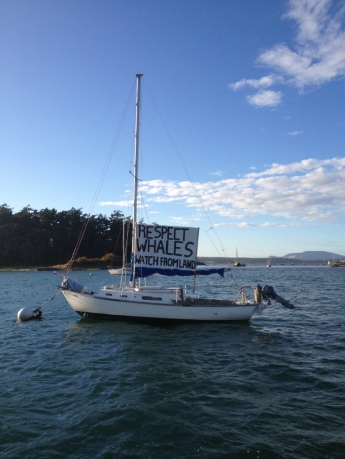 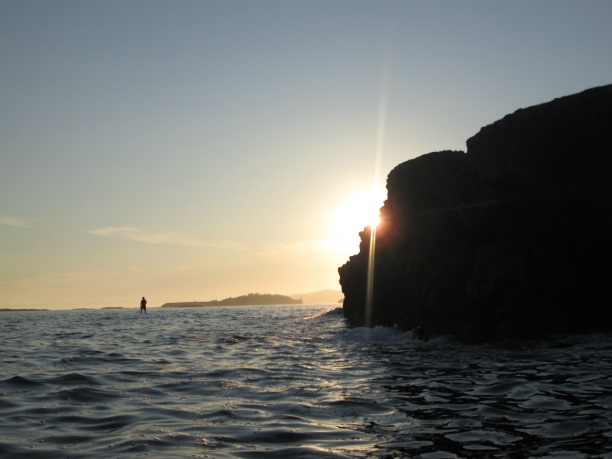 It was October when my bow touched the pebbles at the bottom of the long stairway where this journey began. I schlepped the boat, drove home and fell into a much needed nap. Later, in that half-conscious, half-dream state, I felt the current of the salty river that flows around the Island, felt the rock swaying just slightly, heard the ebb running through a narrows, with the belching and roaring of sea lions a mile away from our house.

Circling the Island was an act of love and gratitude for my home. It reminded me of how happy I am here. How much I want to stay here for many more years. How much there is for me to do while I’m still blessed with life. How much there is to give back to this place and this community. It reminds me of the healing power of water, and of how much our waters need healing.

Thankfully, I am experiencing a healing miracle—a miracle that has required personal change, hope, and hard work; a miracle of cutting edge science and ancient healing wisdom; a miracle of love showered upon me by my people. A supposedly “incurable” disease is going away. Life is saying “Yes” to me again, “Yes, keep paddling.” 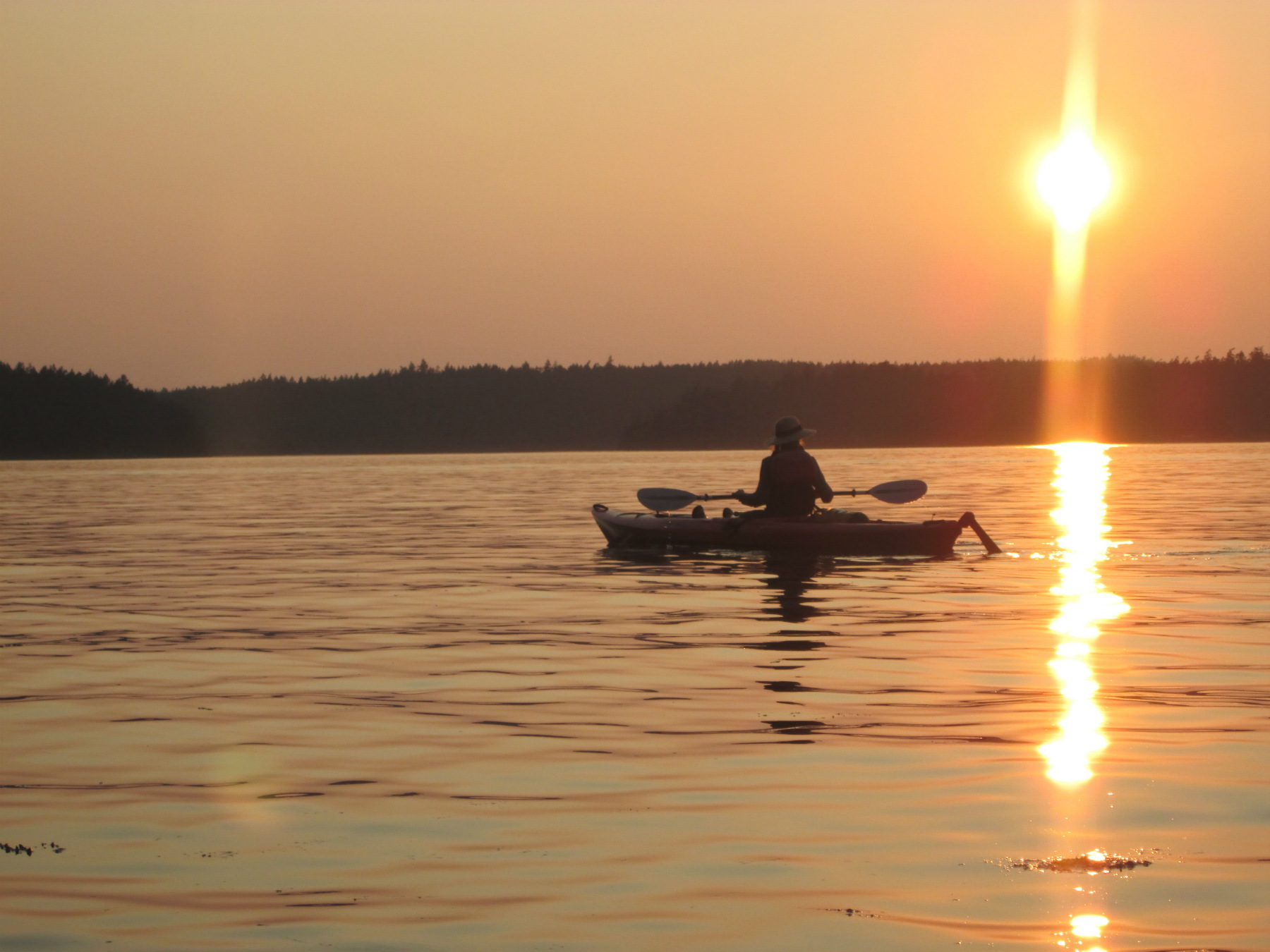 Our Earth and our Water need this kind of miracle. Need us to change, to hope, to work hard, to love. One cancer survival strategy I learned during the darkness of last winter, is to imagine myself at specific events in the future. To see these events in detail and to go there over and over until I wear a path to them. A path from imagined to inevitable.

I’ve been successful so far, making it around the Island, celebrating another birthday on the beach, seeing my son play soccer again. Much farther out, I see myself as a grandpa (no pressure, kids!) The grandkids and I stand on a certain rocky point looking over the Straits. A cool breeze stirs. The Orcas are there, mist from their breath hanging over the sea. I tell my grandkids that things didn’t used to be so good. We were once on a steep and scary slide toward death before we learned how to take care of Water.

Editor’s Note: Guest contributor Mike Conner has lived in an archipelago in the Salish Sea for 26 years. He has worn many hats including environmental educator, kayak guide, backpack trip leader, carpenter, commercial fisherman, water taxi captain, odd-jobber, and homesteader. Most importantly, he’s the husband of an organic farmer, father of an aspiring and inspiring young livestock farmer, and step-dad to a young island woman who has taken the big city by storm.