The first Balkan Rivers Tour focused primarily on the paddling as the team kayaked 23 rivers of the Balkan Peninsula to raise awareness of the planned construction of thousands of hydro dams in the area spanning from Albania to Slovenia. After two years and two tours, BRT has evolved past just a ‘tour’ and has turned into a movement in defense of wild rivers.

Balkan Rivers Tour 3 officially began the first week of September. The Balkan River Defence team couldn’t think of a more fitting place to kick off the third annual tour of the Balkans than to paddle and celebrate the Vjosa River in Albania. As one of the largest free-flowing rivers left in Europe, the Vjosa became the poster child of BRT1. The crew paddled her in a massive flotilla stopping at villages along the way to expose the devastating effects the Pocem dam would have on the region. With dam plans canceled (for now), the Vjosa is a place of hope, fun and beauty.

Peppered across the Balkans are hidden pockets like the green and serene Vardar River which runs through Macedonia’s capital city of Skopje before crossing into Greece. With the time to explore and the freedom to do so with a paddle is what makes this wild area of Europe so special.

This year’s tour had a bit of different formula and flow than previous ones: film premiere, paddling day, and protest. Then travel to a new location and repeat. Because of the different nature of this year’s tour, having access to a few more amenities was crucial. On top of the obvious needs of boats, the crew brought projectors to premiere their documentary film as they passed through different towns and communities. They even brought the kitchen sink! Their one-of-a-kind, custom-made (and homemade) kitchen trailer came with a cook-who-also-kayaks so no matter what kind of weather the crew had to endure, food was hot and ready when they get off the water. 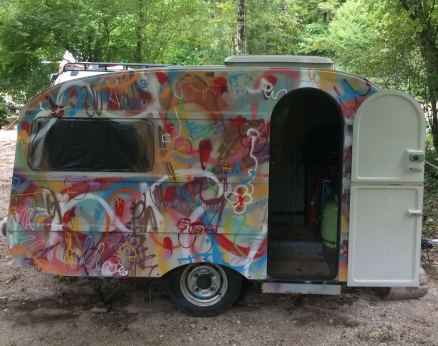 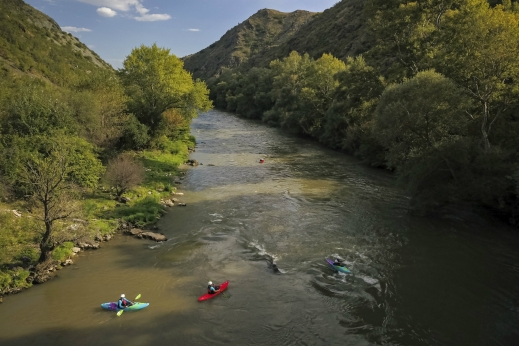 Balkan River Defence’s feature-length documentary The Undamaged premiered at least 17 times throughout the 32-day tour. Each screening had a different audience, language, location and vibe. But one thing remained the same: the energy and motivation to work together to protect wild rivers of the Balkans.

The tour continued to the Valbona River. Cutting through Valbona Valley National Park, the river runs from the high karst mountains known as the “Blue Alps” into class IV-V boulder gardens before turning into a deep limestone canyon. Threatened by illegal hydropower dam construction, which is well underway inside the national park, this Albanian gem is a must-run and a must-save.

As the BRT 3 crew traveled through cities, towns and villages they tried to get locals on the water too. Gear is scarce and instructors even more so, but giving locals who live beside the river the chance to feel the water was an experience that will inevitably help fuel the fight to defend these rivers. 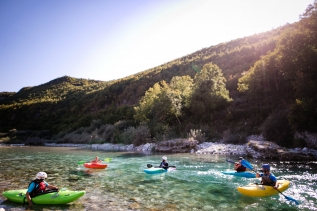 The second week of the tour wrapped up on the Tara River. Kayak Fest Tara got loud and rowdy in celebration and defense of this magical river. 63 racers launched off the start ramp for the third annual event on Montenegro’s Tara River. Racers from all over the world came to enjoy the clear water, amazing local food and live music. Although the hype of the festival is to paddle for fun, the kayakers also gathered in solidarity for the Tara.

So many rivers in the Balkans are threatened by hydropower dam plans, so Tara Fest participants lined up on the edge of the river to show their support for a river that fuels rafting, kayaking, fishing and natural resource-based tourism. The Buk Bijela hydropower dam on the Drina River in Bosnia and Herzegovina would flood the confluence of the Piva and Tara Rivers. Local resistance saved the Tara River once before and they’re teaming up to do it again. 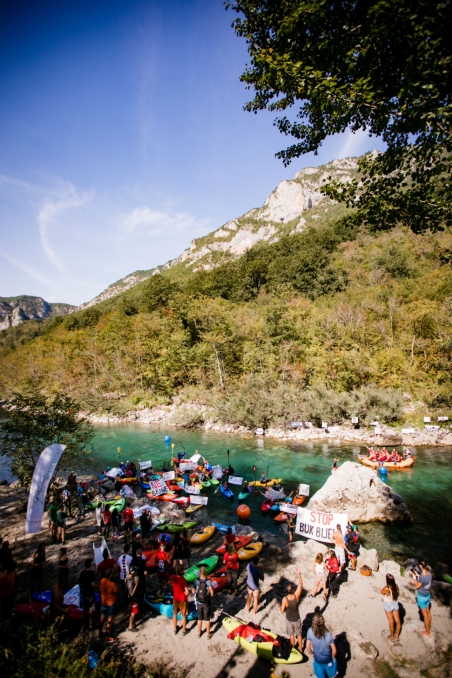 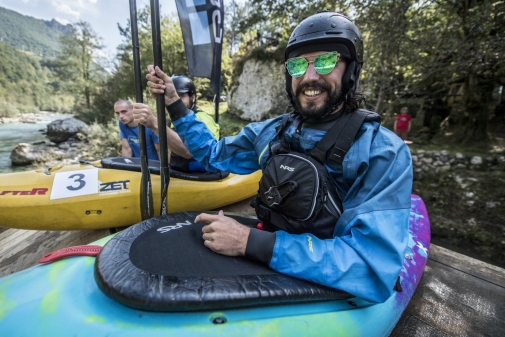 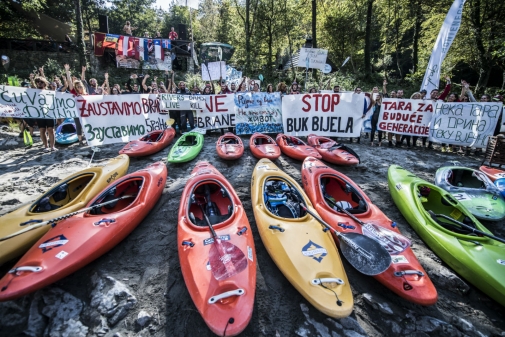 In between paddling, the Balkan River Defence team took the time to engage with and support locals. Turning off the main road during week three, the crew entered the community of Bukovica, Montenegro. By the warmth of the fire in a local pub, they discussed strategies, created a press release and organized a press conference for the following day in the city of Nikšić.

The next evening, under the glass ceiling of a downtown bar in Nikšić, after a successful press conference, they premiered their film, had some great discussions about how to protect the Bukovica River and celebrated the recent victory of the Zeta River where dam plans have been canceled.

Although the BRT crew is more into brainstorming and getting creative on the banks of rivers, around the campfire or at the beer counter, they wrapped up week three in a more conventional way. Putting on the last of their clean clothes, they attended a couple days of the European Rivers Summit in Sarajevo. NGO’s and organizations from all over Europe had joined together to share their struggles (and strategies). Vera, a kayaker and hydrologic engineer, presented the BRD River Intellectuals program where students and scholars studying rivers can connect, converse and contribute their research to the fight for wild rivers. 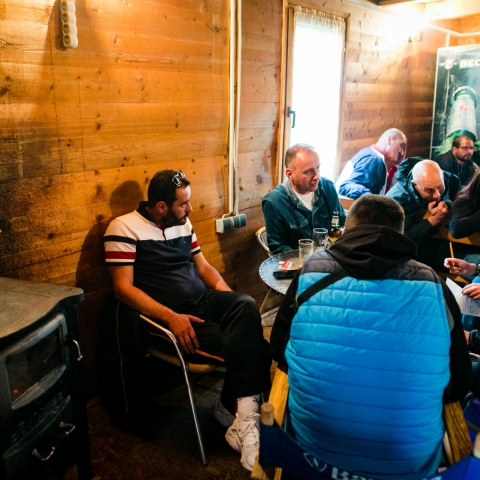 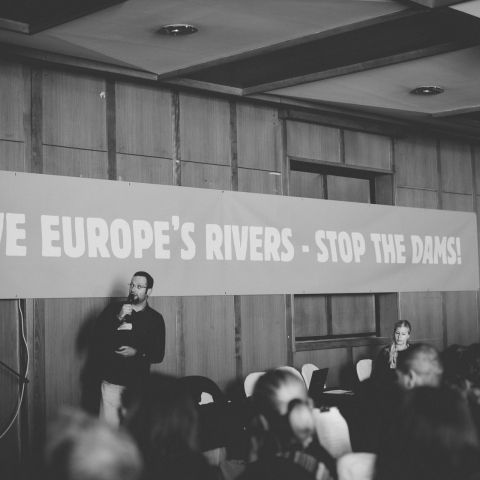 One aspect of the tour that kept the inspiration strong were towns like Krušćia in central Bosnia and Herzegovina. When bulldozers rolled into their valley and began cutting trees and moving dirt to build a hydropower dam, the community of Krušćia took a simple but very powerful action. For the last 15 months, the community, led by women, have been physically defending their river from the illegal and unsanctioned dam construction by blocking the bridge to the construction site 24 hours a day. When special forces police were sent in, they remained seated on the bridge. When temperatures dipped below -10C, they remained, keeping watch over the bridge from a nearby shanty. Their fight has no strategic plan or funding applications. It’s a simple, honest defense of the river that gives their community water. 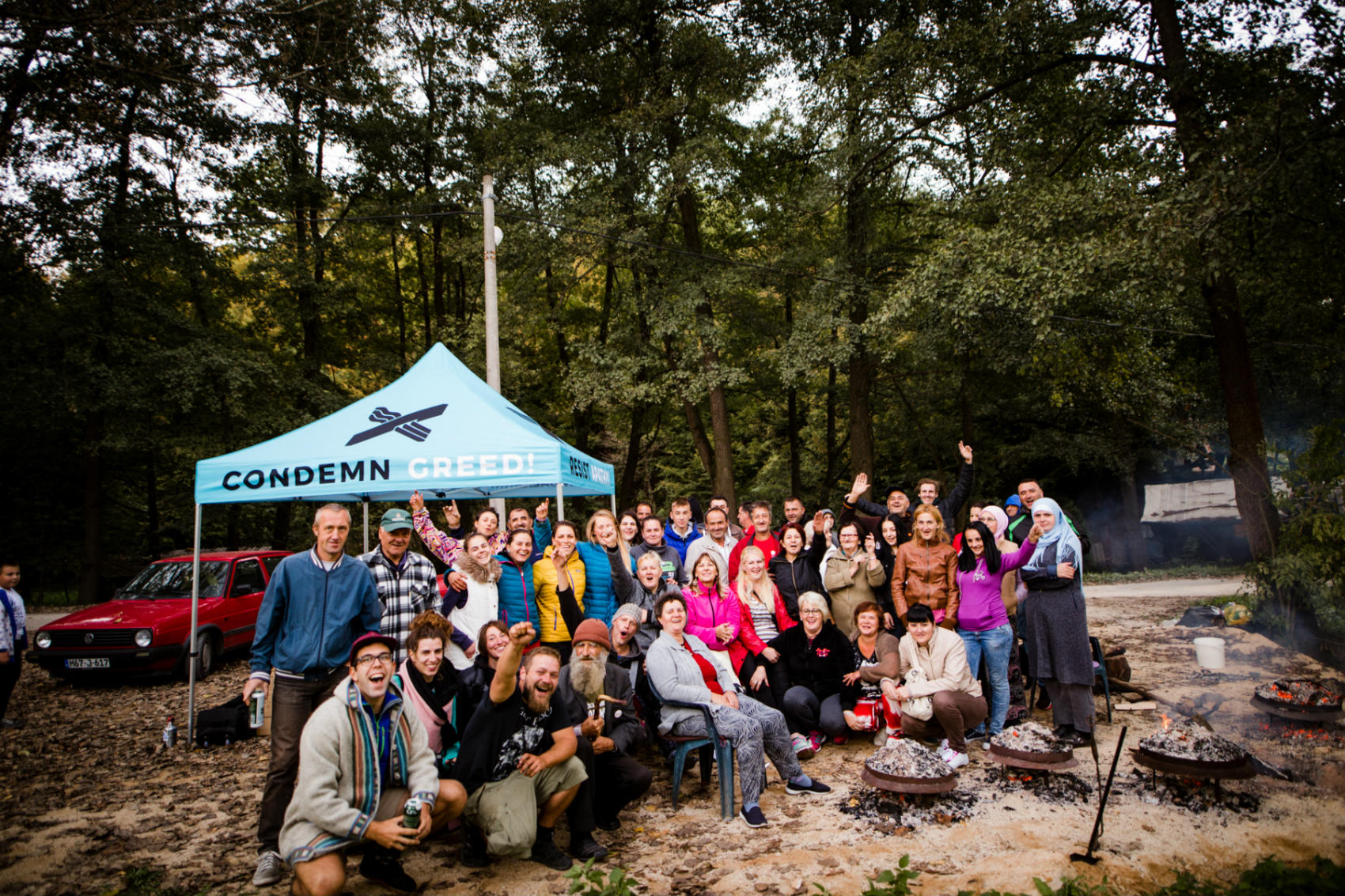 Week four started with a misty morning on the banks of the Vrbas River in Bosnia and Herzegovina. As the fog burned off, the BRT team snapped on their skirts and paddled into the warming sun. At the end of the day, a riverside press conference had gathered at camp offering the crew a chance to discuss water and air quality in the nearby city of Banja Luka, and how the Vrbas River contributes positively to both.

In the following days, the team participated in a couple flotillas. Flotillas are a way for people to come out and show some support for the rivers while having fun and paddling a river they might not otherwise paddle. The action started on the Mura River, which runs from Austria through Slovenia and into the Danube River. It’s a historic river and one that is worth more in its free-flowing state than dammed. As a pending UNESCO reserve, there are some cool people with creative ideas exploring sustainable energy solutions here using old technology. Installing ten floating mills on this river would produce as much energy as a dam, with zero environmental implications. 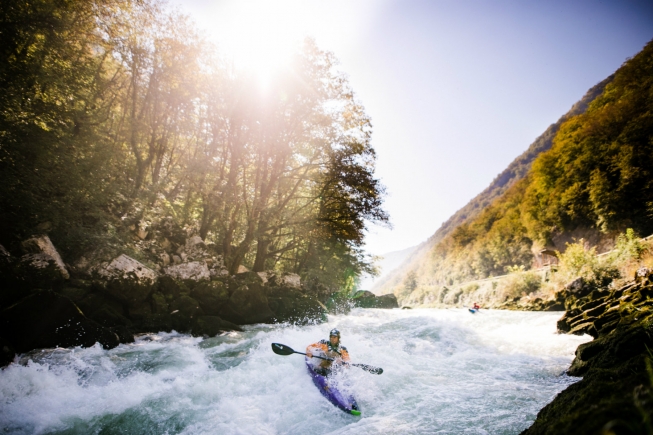 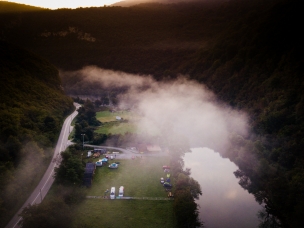 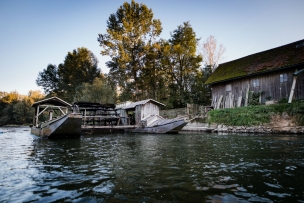 The second protest-paddle was on the Sava River. Paddling the Sava with a united voice was the perfect way to recoup from the team’s late night premiering their feature-length documentary in downtown Ljubljana. With a variety of vessels on the water and lots of signs of love for the Sava River, the crew floated along this sheltered river, feeling as if they were still in the southern Balkans, instead of just 30km outside of the capital of Slovenia. A stand-up paddler’s paradise, the Sava is worth checking out! 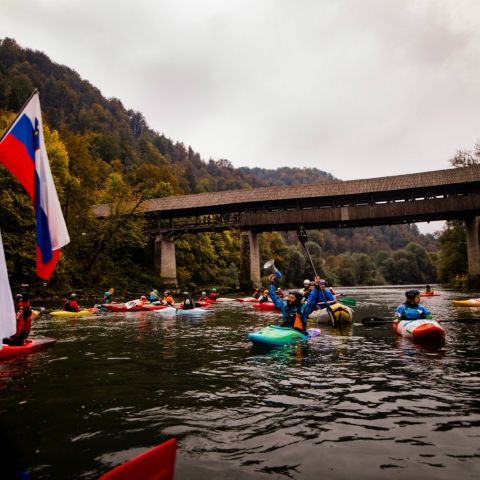 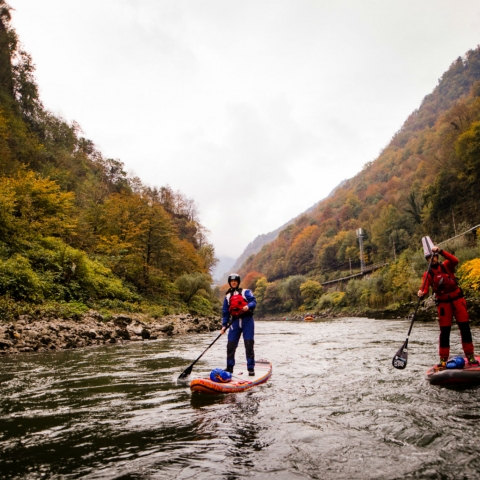 The tour ended on the waters flowing through Slovenia’s capital city, Ljubljana. Making tons of noise, the paddlers portaged through the city to the Parliament building where BRT founder Rok Rozman delivered an open letter with demands to stop building hydro dams in Slovenia and to re-assess the idea that hydro is green/sustainable energy. 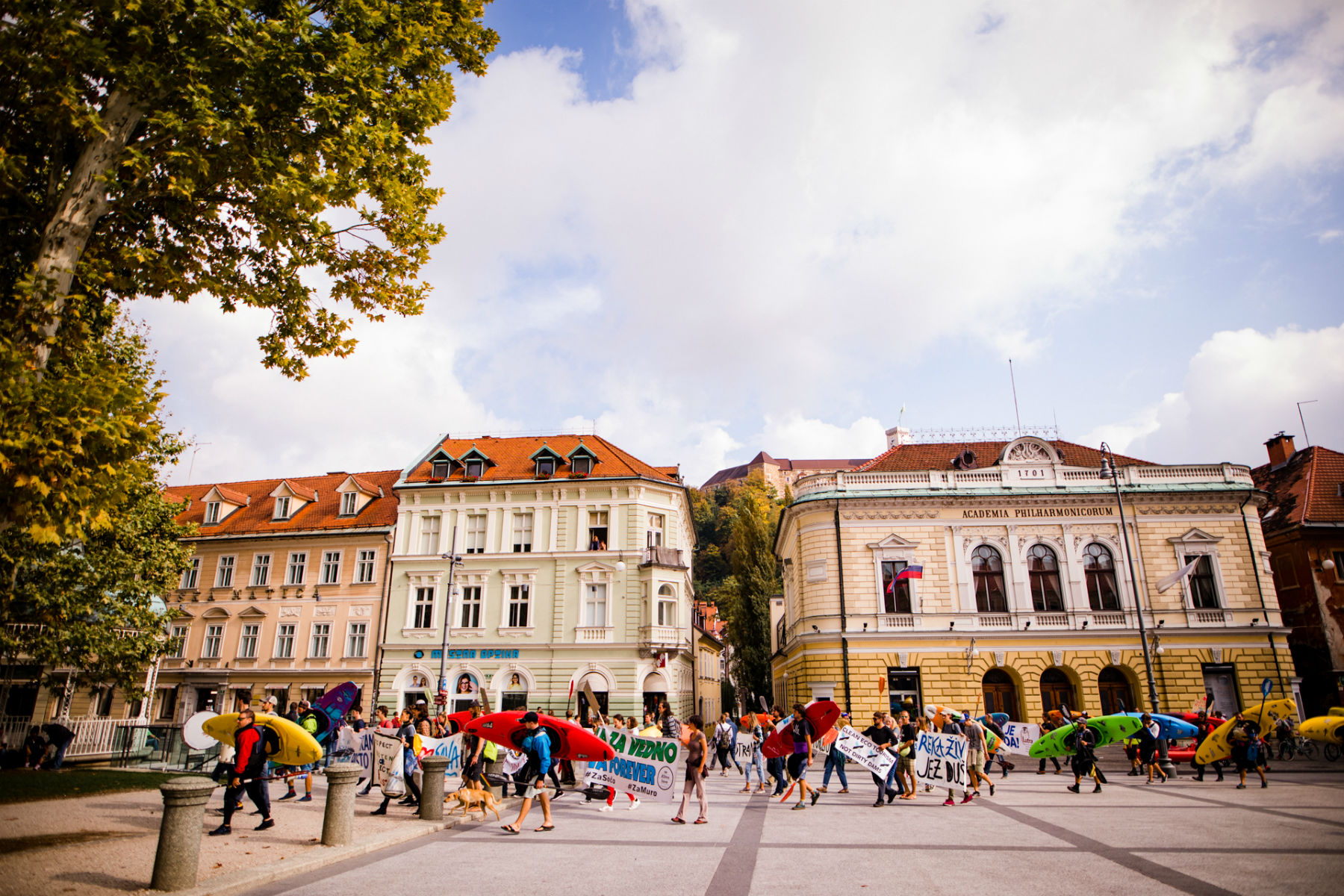 After 32 days of paddling, protesting, premiering (and some partying in between), the feeling of accomplishment is mixed with an eagerness to keep the momentum going. The most encouraging part of Balkan Rivers Tour 3 was the realization that each year, each month, each week, even more people—locals and ordinary civilians—are getting organized in the fight for their rivers. The hugs, high-fives, thank yous and smiles from the people of the rivers of the Balkans left the BRD team energized with new ideas, strategies and events in the works. After a little rest first.

Editor’s Note: Learn more about how you can help save Europe’s last free-flowing rivers at Balkan Rivers Defence’s website.